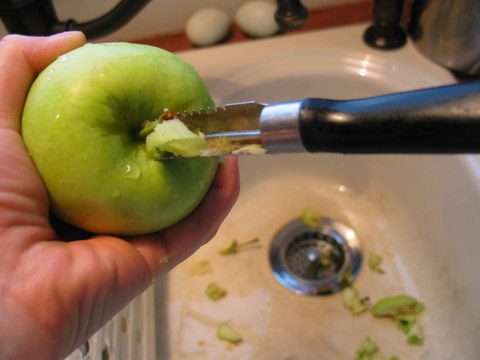 A couple weeks ago when Mr. Handsome attempted to invent a new and improved way to make applesauce (it was new, but definitely not improved), he did try one new thing that I failed to mention: he used the bore end of our potato peeler to cut the stem and tail ends out of the apple.

This week when we made sauce together and I was stationed at the sink, faced with two bushels of Ginger Golds to cut up, I decided to give his new little technique a whirl. Or rather, a poke and a twist, with a flick of the wrist. 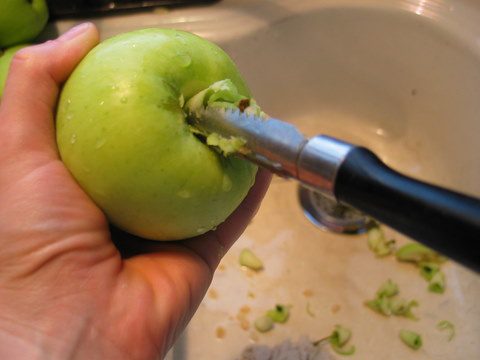 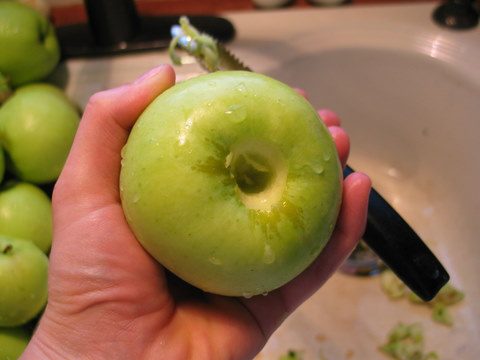 Prior to this, I had always cut the apples in half, making little v-cuts at either end of the apple, for each half. If you’re counting, that’s four cuts. This new method, two little poke-twists and then chunk, chunk, chunk into the sauce pot, is much faster, with much less waste.

By the way, this year I’m buying two bushels of apples here and two bushels of apples there, making sauce a little at a time, aiming for a hundred or so quarts. I want to try a variety of kinds to see which I like best. I know I love sauce from Lodi apples, the kind I make every summer. I don’t put in loads of sugar, as is the custom, so it’s still quite tart, making it a wonderful accompaniment for main dishes.

Wednesday’s Ginger Gold sauce also turned out lovely—it’s thicker than the Lodi sauce, and a beautiful pale green-yellow. Ginger Golds are a sweeter apple, so the sauce didn’t have quite the apple-ly kick that I’m used to (read, a tad bit bland). I remedied that by adding sugar to bring out the flavor, and now it tastes quite delicious.

What’s your favorite sauce apple? What should I try next?

Update: Friday, August 22, 2008
Two nights ago we turned another two bushels of apples into sauce—Rambo apples this time, and the resulting sauce was quite delicious. I liked them better then the Ginger Golds, but not quite as well as the Lodi. However, they gave us the best yield yet—39 quarts this time. That means we now have put away 101 quarts, so I’m officially done for this year. Oh, except for drying apples…