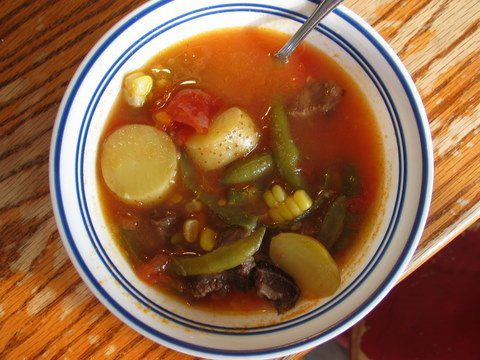 I have a number of recipes stuffed up my sleeve, waiting to be shared with you (and every time I wave my arms about they nearly slip out…). I’ve been wanting to post them, but I don’t get around to it, and in the meantime I keep cooking and clicking pictures and now I have so many that I’m afraid I would overwhelm my lovely readers if I threw everything—SPLAT!—at you at once. So I’m compromising. I’m picking three recipes (trying to avoid the dessert food group so you don’t think I live on just chocolate and butter, even though that’s the truth) and posting them together, medley format. La-de-da.

I’m bad at writing down recipes for soups, especially vegetable soups, because instead of following a recipe, I just cook with what’s on hand. However, this soup is simple and conventional and delicious, so I’m going to go ahead and share it anyway. I made a big pot and we’ve been eating it for several days straight. It helps me feel a little less guilty about my afternoon forays down to the basement to dig in the freezer for those delectable chocolate chunk cookies.

In a large soup pot, one with high sides (to avoid splattering grease all over your kitchen floor), heat the olive oil. Salt and pepper both sides of your soup bones and gently ease them down into the hot pan. Clap a lid on top (I hate grease splatters on my floor) and wait a couple minutes before carefully lifting the lid and turning the meat over to brown on the other side for another couple minutes. Remove the meaty soup bones to a plate and let cool for a little.

Add the onions and celery to the pan and saute them in the leftover olive oil and beef fat. While they are sauteeing, pick the meat off the bones, removing the bits of fat (your dog and cat will appreciate them), and chop up the meat into bite-sized pieces. Do not throw out the bones.

When the onions and celery are sauteed, add the red wine, bay leaves, beef bits, and soup bones. Cover with water (not too much because you’re going to add the tomatoes later—they will provide the main liquid for the soup) and bring up to a gentle boil.

Add the carrots and potatoes and when they are partially tender, add the green beans. When everything is tender, add the corn and the tomatoes and heat through. Season with salt and black pepper. Throw the soup bone to the dog (she’s sitting right by the door, tongue hanging out, drooling).

Serve the soup with thick slices of brown bread, butter, and a variety of homemade jams.

Mustard Eggs
This recipe comes from my Girlfriend Amber’s collection. 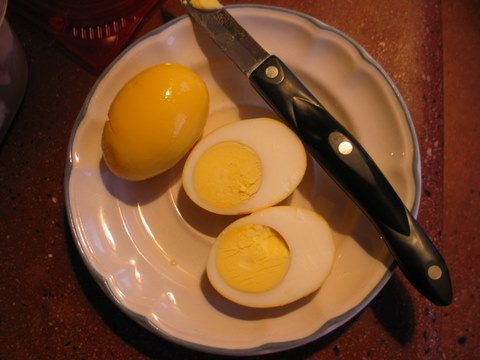 Mr. Handsome likes these eggs in his lunch, so every once in a while I cook up a batch and keep them in a jar in the fridge, all ready to be packed into his little white and red cooler first thing in the morning. He’ll eat two, just as they are, along with his sandwich, or for a snack, or chopped up on his potato salad. The kids like them, too, though I’m still trying to get them to enjoy the yolk—all they want is the mustardy whites.

Put all the ingredients, except for the eggs, in a saucepan and heat through, stirring well. Put the eggs in a half-gallon jar and pour the hot liquid over top. 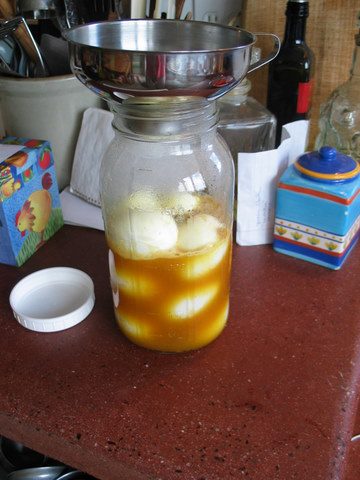 Put the lid on the jar and refrigerate. After 12 hours, shake the jar and turn upside down for the next 12 hours. Continue this process of shaking and turning (the jar, not you, silly!) and after three days they are ready to eat (we do cheat and start eating them sooner and they’re still good, though not as fully mustardy).

Note: The one downside to these eggs is the smell. Right after you open the jar (or your little Tupperware container at lunch break), it smells like someone let rip a really bad one. A really, really bad one. However, the smell rapidly dissipates, and if you just inform everyone right off the bat—“It’s not me! It’s these eggs!”—you can avoid some potentially embarrassing situations. 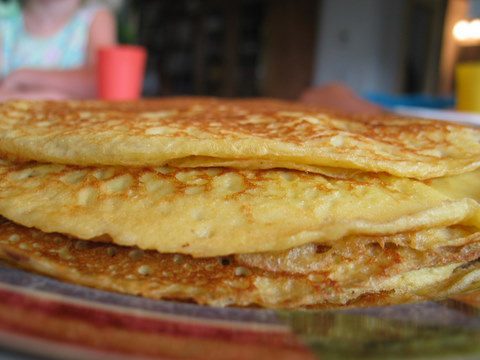 I got this recipe from my wise Girlfriend Shannon. I also got a similar recipe from a foreign student who lived in my college dorm one year. They’re similar to crepes. (Maybe they are crepes?) I make these for breakfast sometimes, but more often I make them for lunch. They provide the kids with protein and are delicious to boot.

While the pancakes are a snap to whip up, they do take about half an hour to cook, since I only fry one at a time, but I do other things while they’re cooking—empty the dish drainer, wipe down the counters, water the plants, talk on the phone—in other words, I’m not spending that entire half hour slaving over a hot stove.

To serve them, I drizzle them with honey or sprinkle them with powdered sugar before rolling them up. Sometimes I stuff them with cream cheese and blueberries. This last time I made some whipped cream and used that as the filling. We had peaches, too.

This recipe makes one blender full and feeds my four kids and me, but just barely. If we are extra hungry, or if Mr. Handsome is eating, then I have to make a double batch.

Whirl the eggs in the blender. Add the flour and salt and whirl some more. Add the milk and whirl again. Whirl, whirl, whirl. 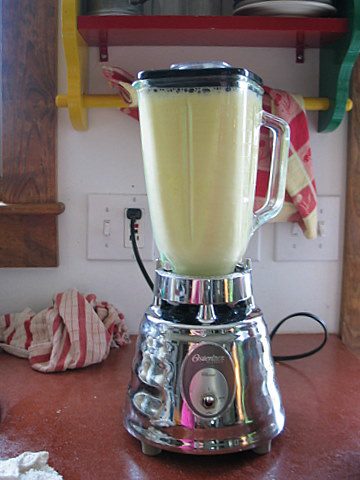 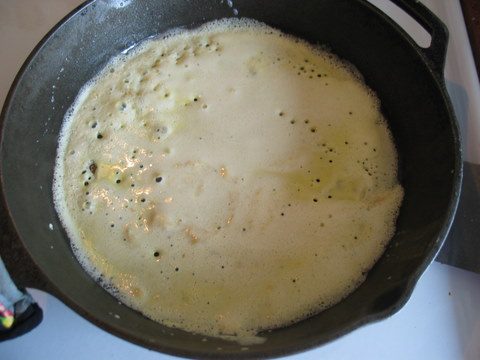 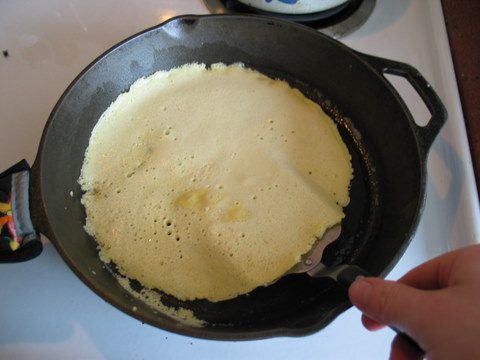 and allow to brown on the other side. 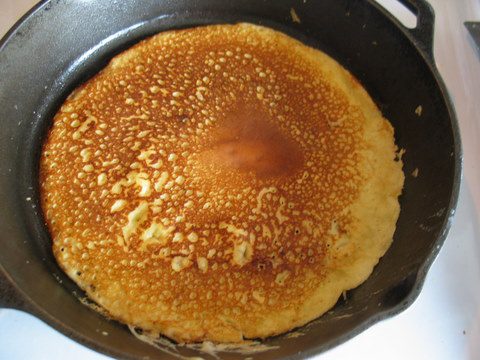 Put the pancake on a plate when it is done cooking. Repeat the whole process, stacking the pancakes as you go. 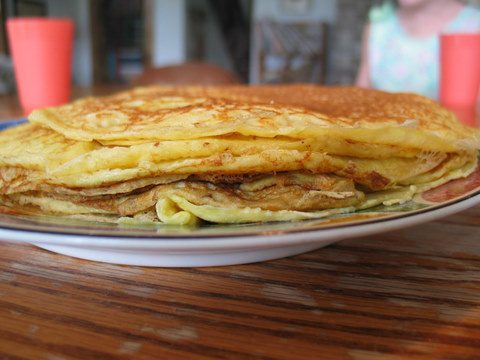 Don’t call people to the table to eat until you have a big pile because they will scarf them down immediately and then yell for more which will annoy you and give you a headache. It’s easier to make all the pancakes first. 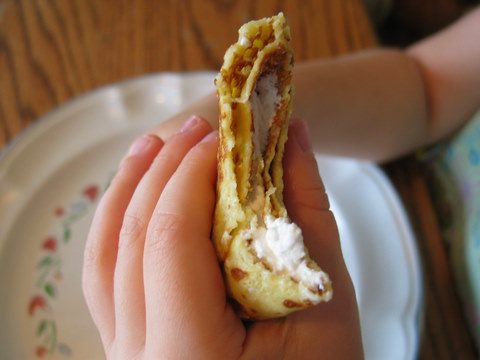 How my kids eat them. 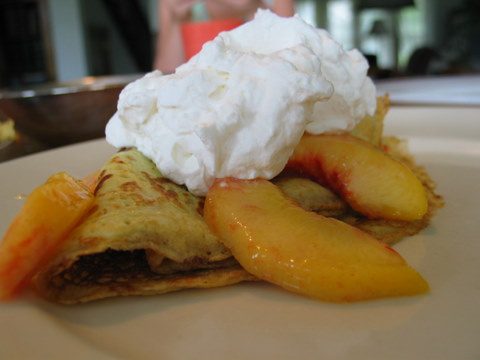 How I eat them.

So there you have it, just a little taste of the kind of music I like to make. La-de-da, boom, boom, yum.