Two days after we put up that yard sign, someone climbed our fence and stole it. So we put up another one. 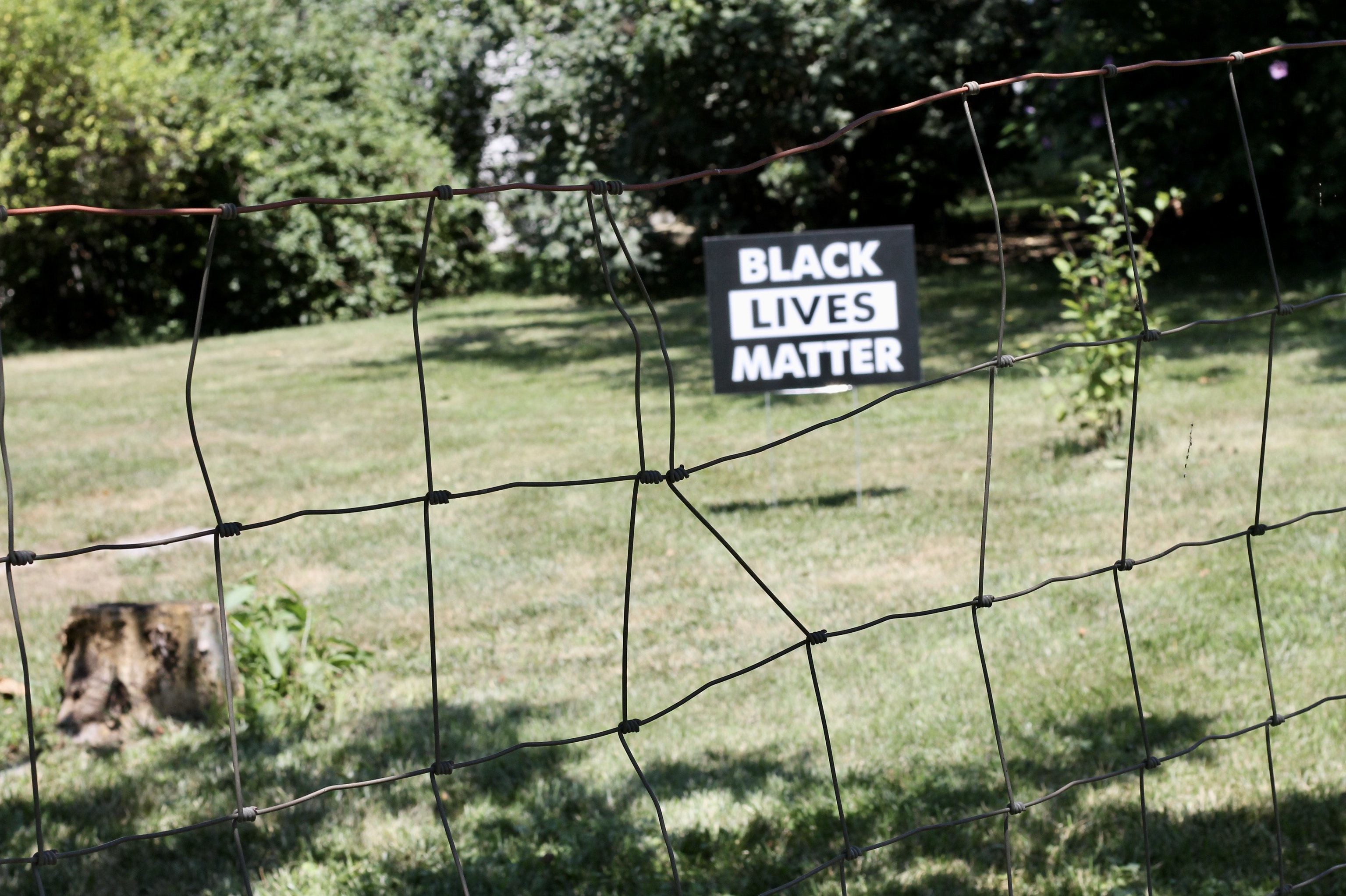 Then that afternoon when we were all outside getting ready for the wedding, a man we didn’t know walked by shouting that all lives mattered. His aggressiveness was so startling — so utterly bizarre — that I almost laughed. Some people.

A little later, my older son left to run an errand. Almost immediately, he called us. The man was walking back, my son said, and when he’d driven by him, the man had yelled, flinging his arms wide and then lunging towards the car.

It was like he wanted to hit me, my son said.

We could hear the man bellowing all lives matter before he even reached our house. Without thinking, I walked into the yard to meet him. I had no idea what I’d say, but I knew I couldn’t cower in the shadows while he yelled us. I needed to see him, and I needed him to see me.

As I approached the fence, I called out a greeting and asked his name.

“It don’t matter what my name is,” the man blared. “You read your Bible!” He stepped closer and jabbed his finger at the sign. “Read your Bible! Quit being a hypocrite. All lives matter, not just freakin’ Blacks!”

“Of course they do,” I said quietly.

“You’re damn right they do! So quit supportin’ ‘em. Stand up for your damn self!”

He turned abruptly and I, unwilling to let him walk away without some sort of rebuttal, called after him, “I hope you learn to let other people talk, too —”

He flapped his hand at me in disgust and stormed off, and I headed back to the house.

I’d almost reached the porch when, suddenly overwhelmed and short of breath, I sat down in the yard. What had just happened? What kind of a person screams at complete strangers?

My older son pulled into the drive then — after he’d called us, he’d circled back — and my older daughter held up her phone. She’d recorded the whole thing.

Within minutes our collective flabbergasted silence soon gave way to incredulity and indignation and, with emotions soaring sky high, we turned on each other.

Someone should follow him.
No, let it go.
But we need to know where he lives!
No. He could have a gun.
That’s crazy.
You saw how he acted!
He’s not going to do anything.
You don’t know that.

In the end no one went anywhere, but I was reminded of the Beautiful Trouble seminar the two older kids and I had taken a couple years back where we’d learned tools to effect change through nonviolent means.

I was shaken and unmoored. What was the right way to respond in this situation? How should we proceed? I had no idea, but one thing was clear: For this sort of backlash, we were entirely unprepared.

The next morning I woke early, my mind racing. Should we have reported the incident? Was our family in danger? Was it safe for me to go running by myself? And then—

Oh no! That man had been standing only inches from my face and I hadn’t been wearing a mask!

Downstairs, I opened Facebook and shot a message to a friend who’s been active in the BLM protests. I needed some coaching. How were we supposed to respond to this sort of aggression? When should we engage? When should we hide?

It felt a little nervous, sharing what had happened. Would he, like my husband, think me foolish for getting so close to an irate stranger? Would he tell me I’d worsened an already volatile situation?

I needn’t have worried. My friend wrote back without even a hint of reprimand. Instead, he took what happened seriously — more seriously than I even had. There’d been a few cases of harassment (even death threats) since the protests and he named specific trends to watch for. He pointed out that tampering with a sign is not just a minor inconvenience (as I’d framed it in my mind) but an actual crime. He parsed the video, pointing out the ways in which the man’s language reflected the ideology of white nationalists.

And as to how we should respond? Take down license plate numbers, he said. Figure out where people lived, if possible. Film all interactions, and do so openly since being filmed tended to keep people from doing anything too stupid.

It was basic information, really, but just knowing what sorts of things to look for, and how to collect the necessary information, reduced my anxiety tremendously. If this happened again, at least I’d have a plan.

When that man yelled at me, part of me felt stricken. Raised in the Mennonite peace tradition, it’s been hammered into me that the correct way to solve conflicts is through peaceful means. We dialogue. We speak calmly. We listen. We reconcile and forgive. We are supposed to make peace, not goad complete strangers into apoplectic fits. Clearly, I’d done something wrong.

In the moment, my immediate gut reaction was to de-escalate the situation and find a way to have a productive, rational conversation. And afterward, I felt ashamed. It was all my fault. If I’d been better prepared with the right words — the right logic, the right expressions, the right tone, the right body language — maybe there could’ve been a better, more constructive, outcome.

And yet why should I expect anything different? Since when does speaking out against an injustice go over well?

Having that man’s rage trained on me was transformative. The fear and bewildering confusion I felt in that moment were both illuminating and galvanizing. I’ve never doubted there is racism, but discussing it in measured tones — in my Sunday school classes, writing groups, anti-oppression equity task force meetings, and blog posts — is one thing.

Feeling it is another thing entirely.

This story has no tidy ending. I’m still conflicted. I worry that putting up a sign worsens our country’s deepening divide. I worry that things are already too fargone. I worry about what may happen if we don’t take a stand.

So to close, here are a few gems that have helped ground me….

*Bryon Stevenson on how America can heal. (The Ezra Klein Show) I’ve listened to this podcast twice, once by myself and then a second time with the rest of the family. If you can only pick one thing from this list, let it be this. It’s long but it’s so good that I wish it was longer. 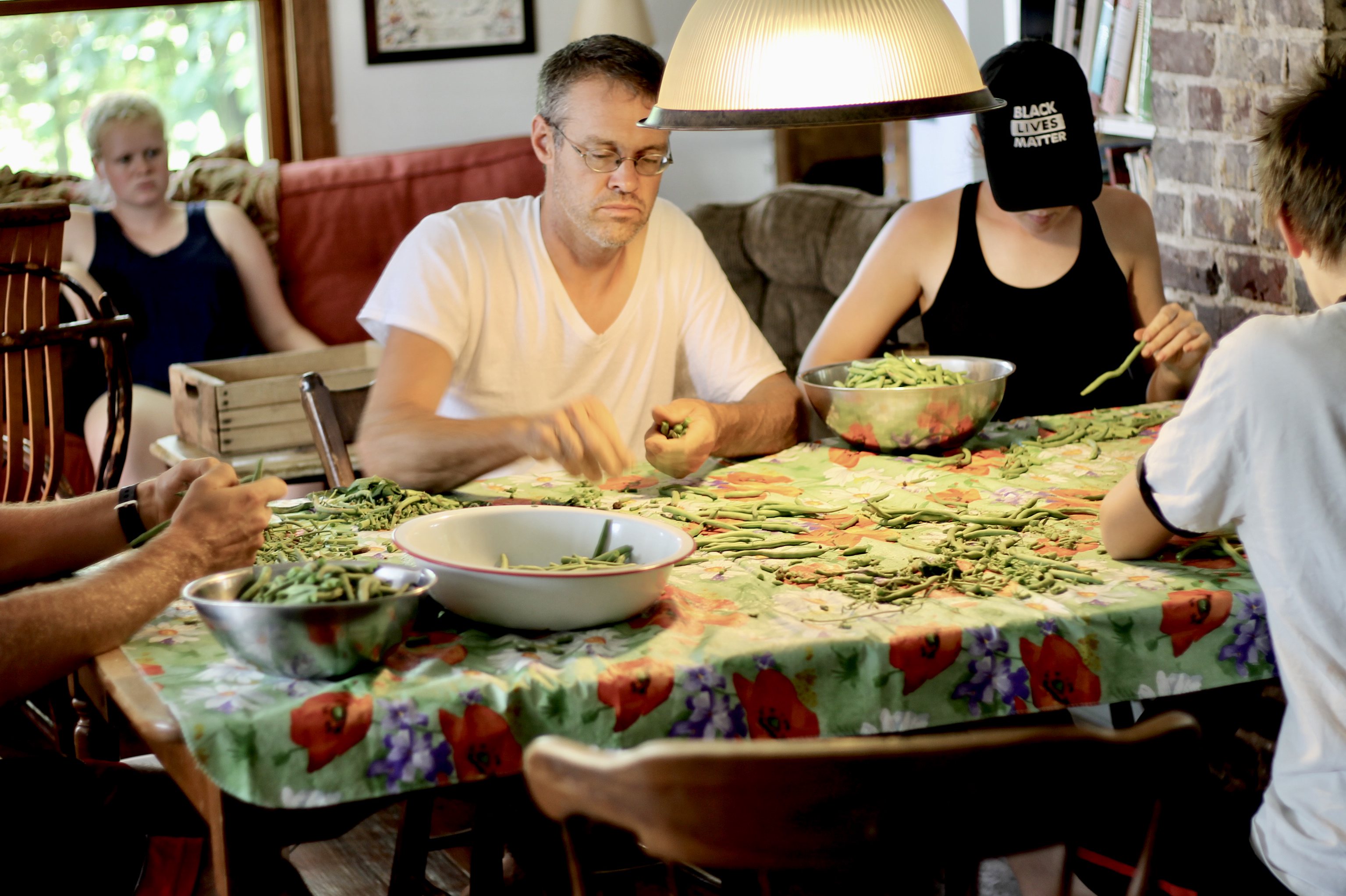 *The documentary John Lewis: Good Trouble is well worth it. We watched it as a family the other night, with lots of stops and starts so we could explain and discuss. (And today the NYTimes published his last writing: Together, You Can Redeem the Soul of Our Nation.)

*Regarding the Portland BLM protests, here’s a short documentary about the Wall of Moms and their switch to Black leadership.

*This is a local report on the deepening divide in our area: A Valley Between Them. (The Harrisonburg Citizen)