A few weeks back my husband started wondering if he might have a gluten intolerance. He’s known he’s lactose intolerant for years now, but recently the pain — the stomach cramping and bloating he’d usually been able to keep under wraps with his lactaid pills and reduced dairy consumption — was flaring up. In fact, this time it didn’t even seem to be linked to dairy. So he decided to experiment with gluten.

I took his announcement in stride. The man is forever saying he shouldn’t eat something or other and then forgetting what he said and eating it anyway (and feeling just fine). There was no way I was going to overhaul my cooking if this was just another one of his whims, so when he declared war on gluten, I just rolled my eyes.

“Sure, go for it,” I said, pulling steaming loaves of crusty sourdough bread from the oven. “Maybe you’ll feel better.”

So then after skipping gluten for a week and feeling great, he ate some sourdough bread and spent the next 18 hours feeling terrible. Which then sent me into a tizz. How, exactly, did one go about cooking gluten-free?

Of my four basic starch groups — rice, potatoes, bread, and pasta — two were gone. Overwhelmed, and unable to sort out a menu that didn’t upend our lifestyle entirely, I dashed to the store for a bunch of GF foods: frozen pizza, rice noodles, pancake mix, sliced bread, all-purpose flour substitute. Once I had some supplies, I felt less trapped. Now I could make a plan. In the meantime, he wouldn’t starve.

Turns out, the switch to gluten-free cooking wasn’t actually that big a deal. We ate more rice and potatoes, tons of veggies, a little more meat. My husband, to his credit, was extremely low-key about it all: granola with water for breakfast; boiled eggs, nuts, and apples for lunch. He didn’t make a stink about missing food or needing anything special. As long as he had chips on hand, he didn’t even seem to miss the pies, cakes, and bread that had gone missing (though I missed making them for him!).

I quickly realized that, since the store-bought GF bread tasted distressingly like cardboard, homemade gluten-free bread was the number one thing I’d need to figure out. (The number two thing would be pie pastry.) My sister-in-law shared some of her recipes with me, and after a couple tries and a few tweaks, I was actually quite pleased with the end results. 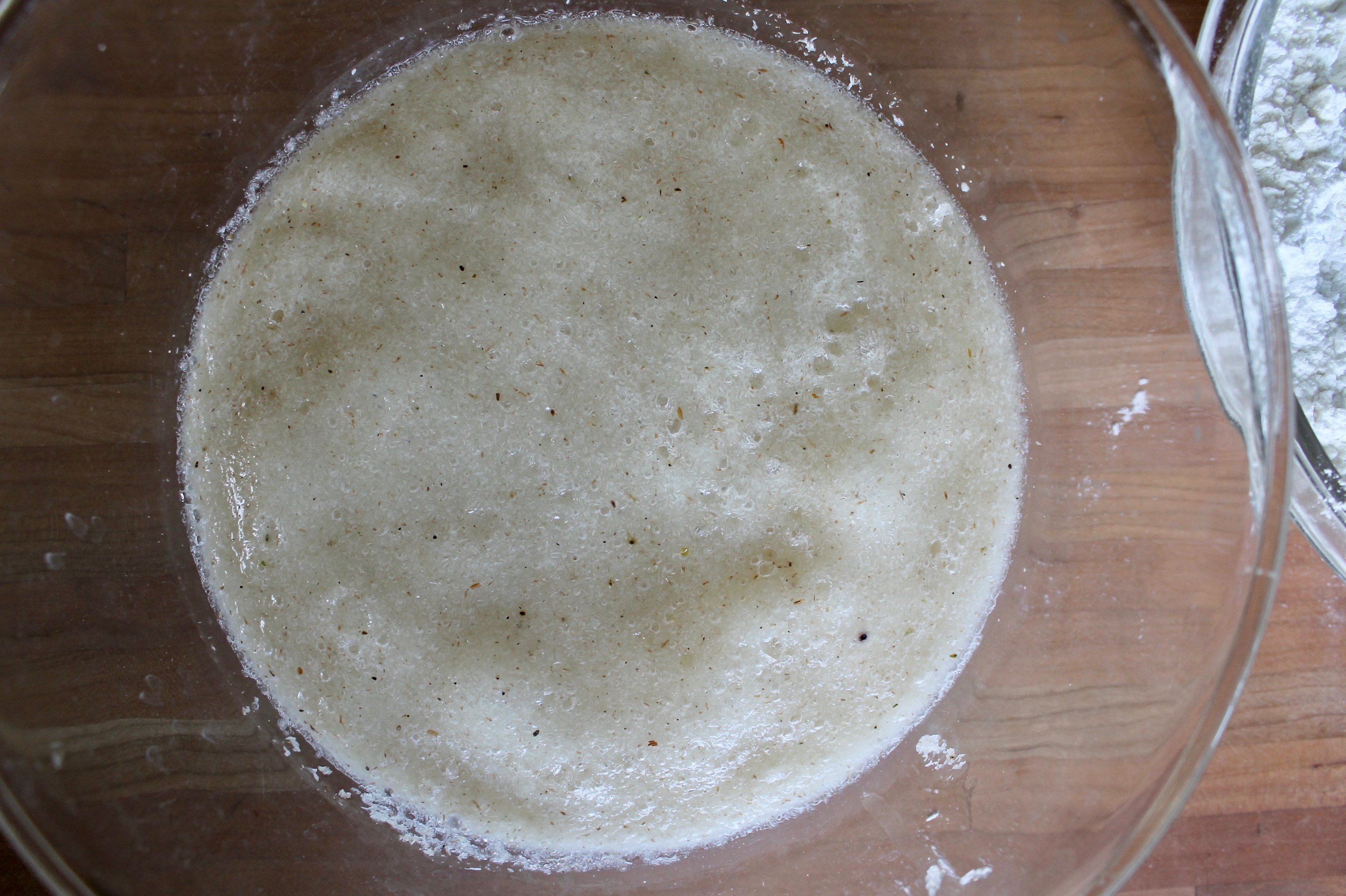 the psyllium and yeast mixture

Even though this bread is yeast based, it handles more like a quick bread: no kneading and a spoonable dough. Instead of flour — and it feels so weird to make bread without flour! — I use rice flour, tapioca starch, and an all-purpose gluten-free substitute. Which made a very white bread. So then, for color and texture, I toasted a half cup of rolled oats until they were dark brown and ground them into flour. 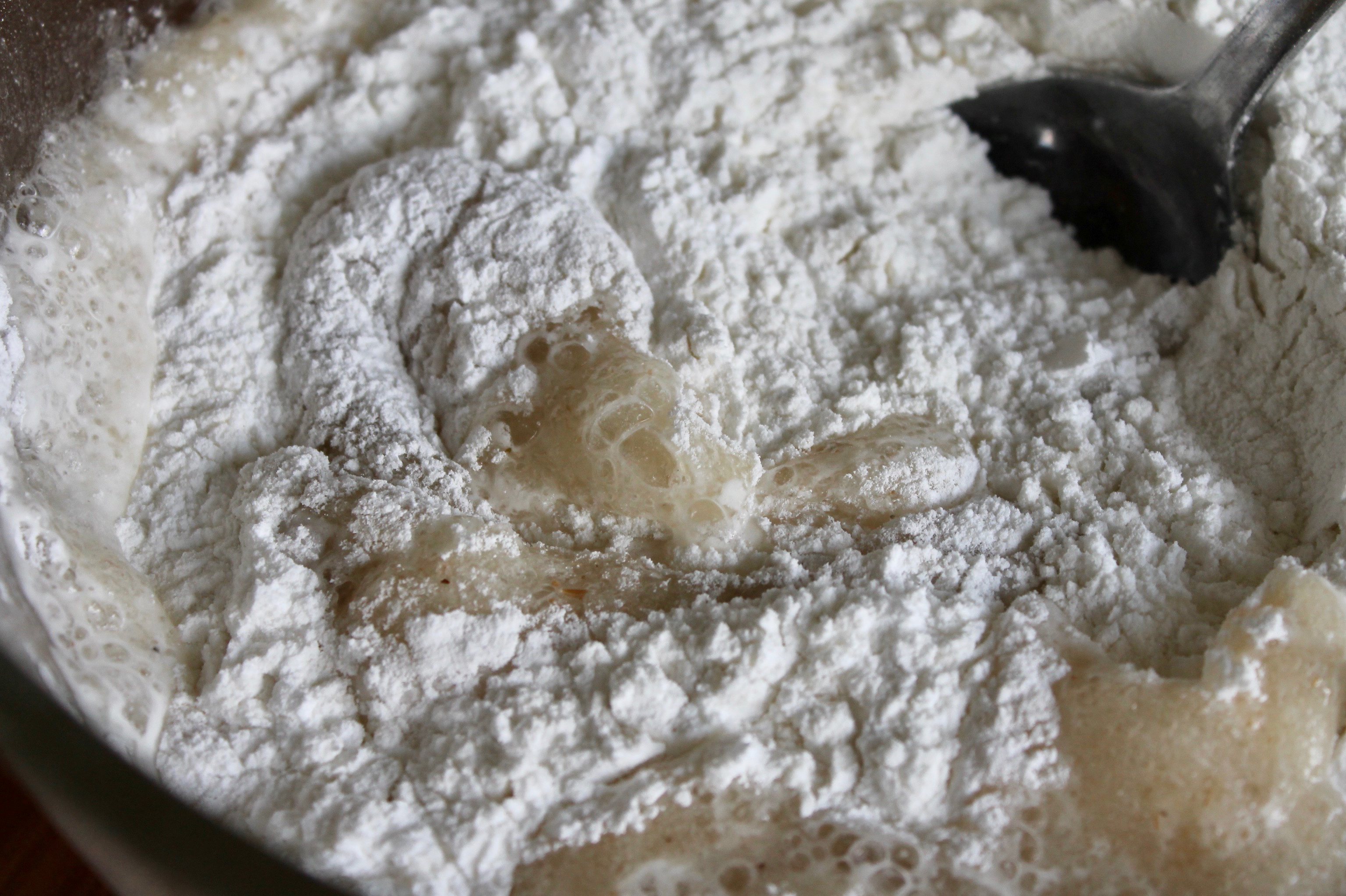 so brilliantly white that I almost need sunglasses 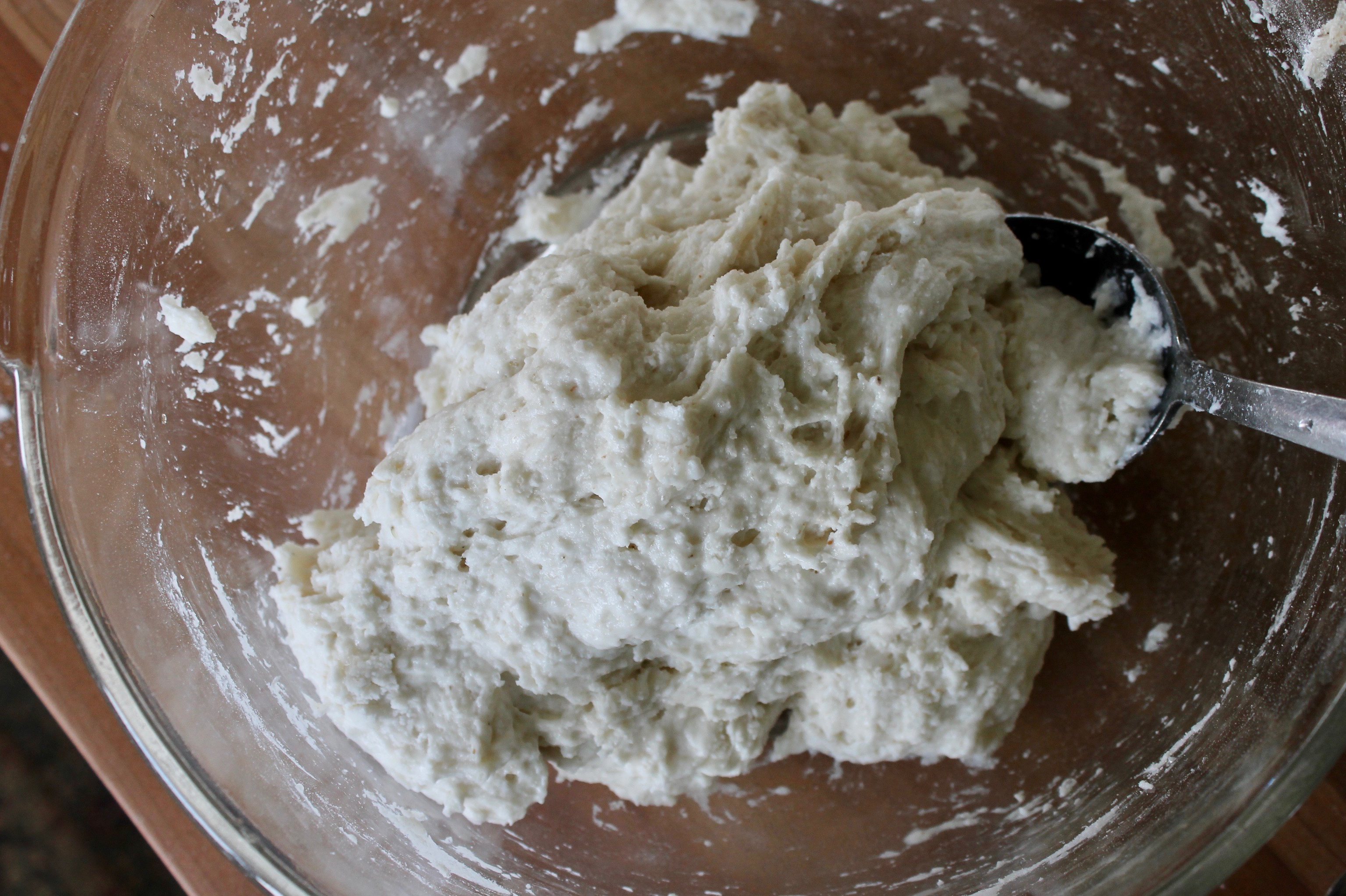 Psyllium, the husk of a seed that is often used as a laxative (and that I hear advertised on NPR all the time), is the special ingredient. They say it makes all the difference in gluten-free baking since it helps the bread to retain moisture and makes it a little more elastic.

Don’t go overboard on the psyllium, though! Once I mistakenly added too much and the resulting bread had a distinctly cobwebby mouthfeel. 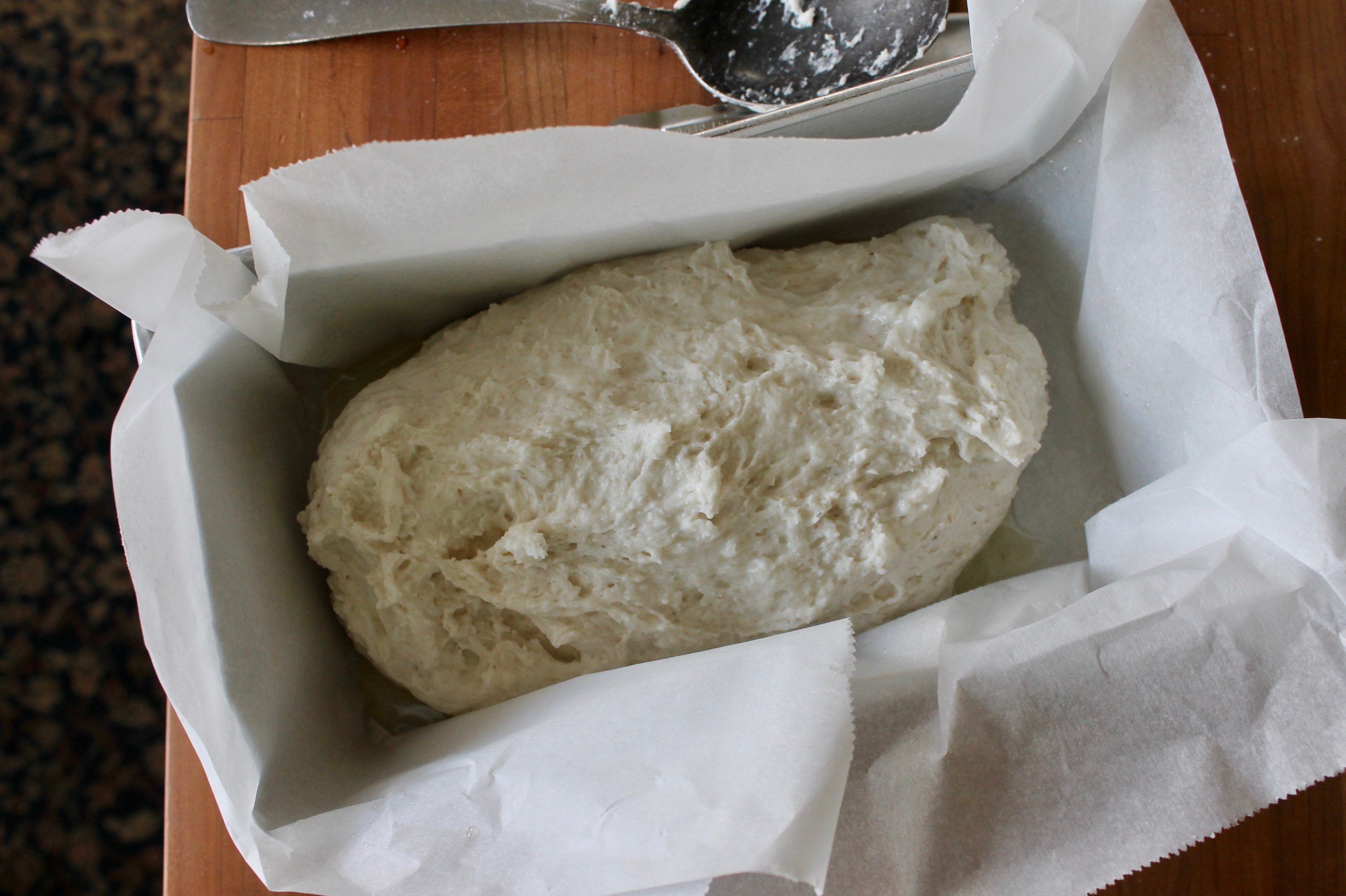 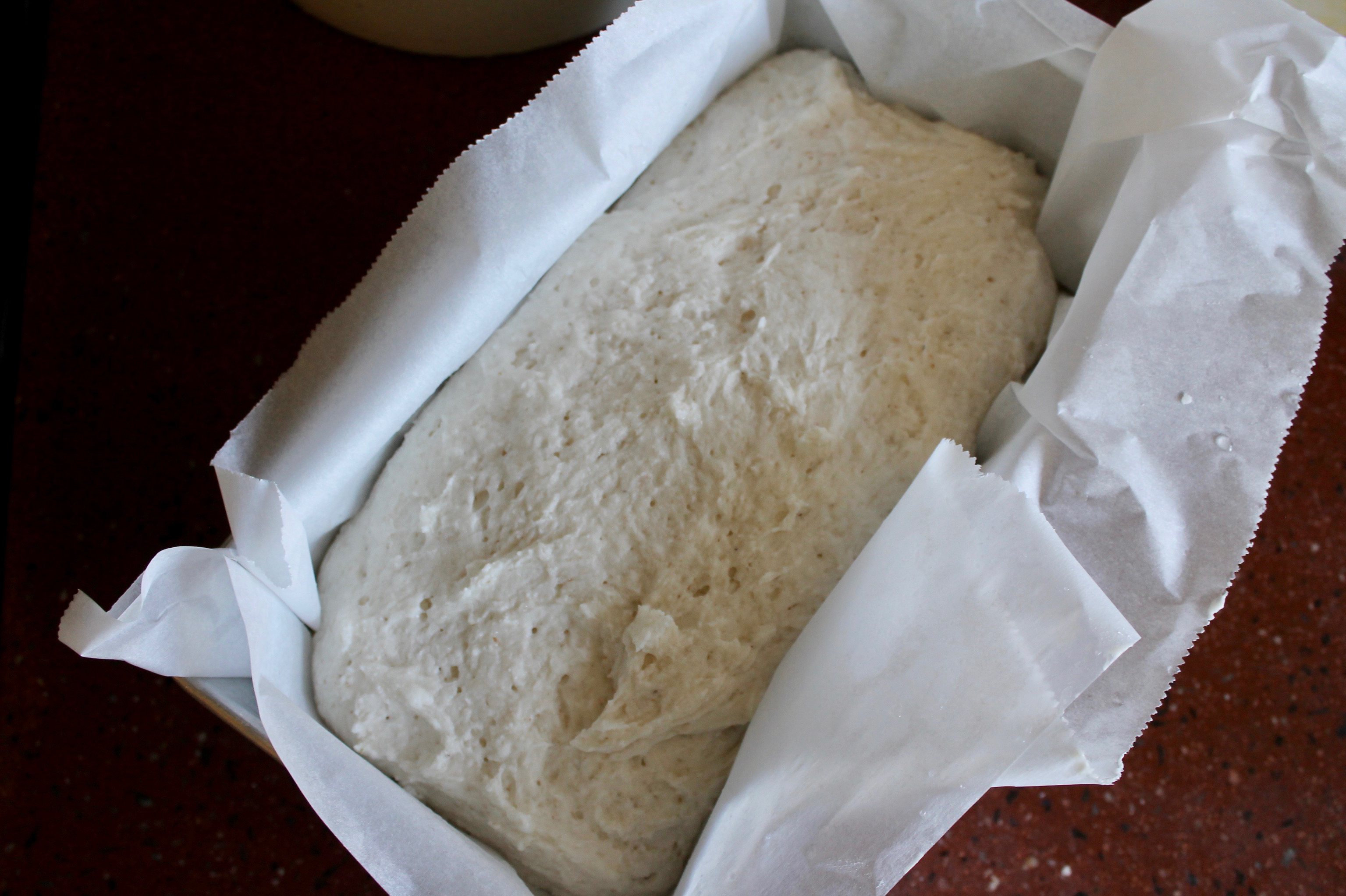 The bread doesn’t rise in the oven at all (again, weird!), and the top turns dusty-white as it bakes instead of golden brown. The bottom and sides, though, get nice and golden. 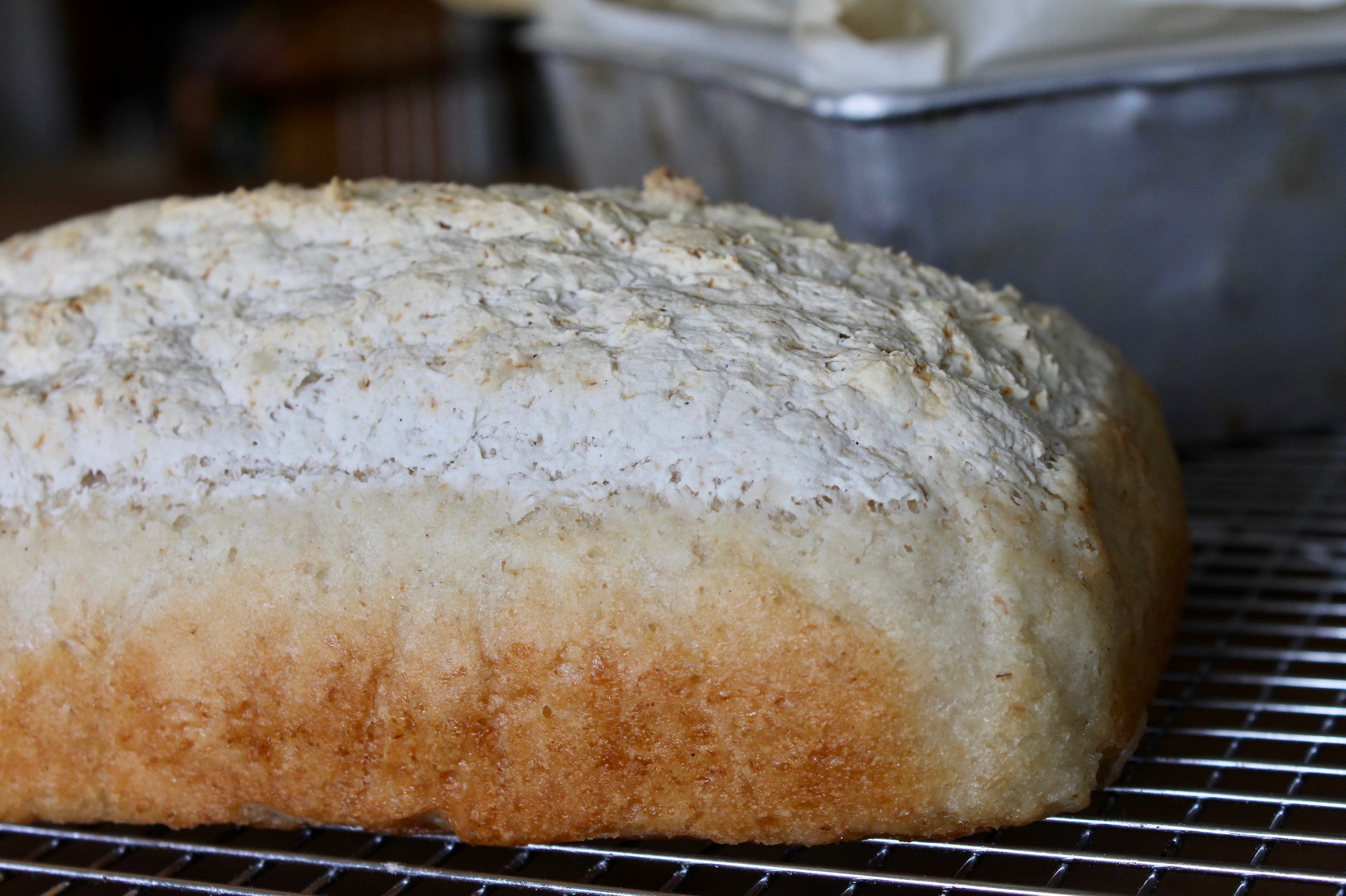 The bread needs to rest for a good 12-24 hours before slicing into it because otherwise it’d be gummy. 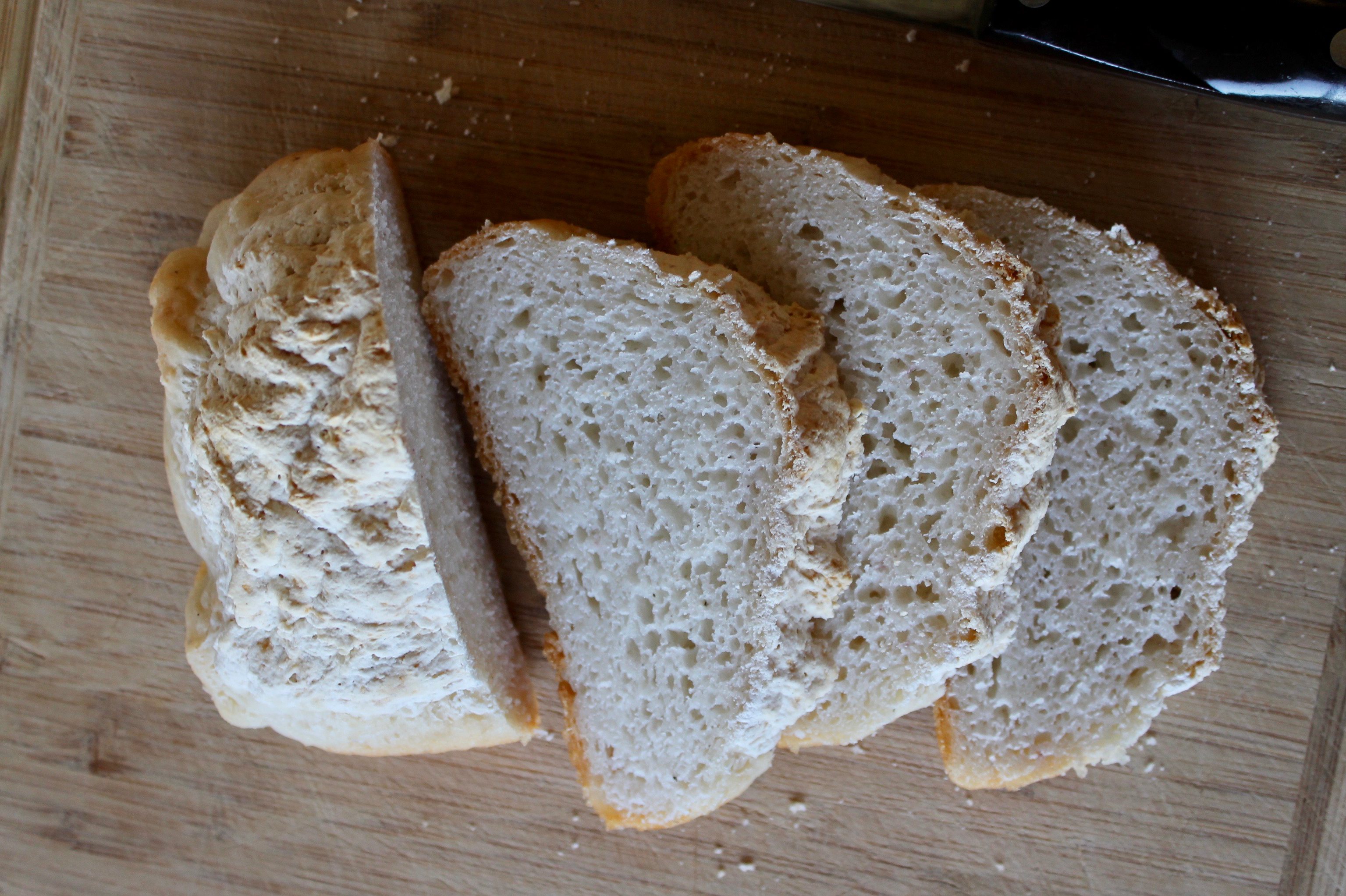 It’s not anything like sourdough, of course, but it tastes good. The texture, what with all its little bubbly holes, reminds me of English muffins. There is a slight grittiness to it (the psyllium?), but it’s barely noticeable. 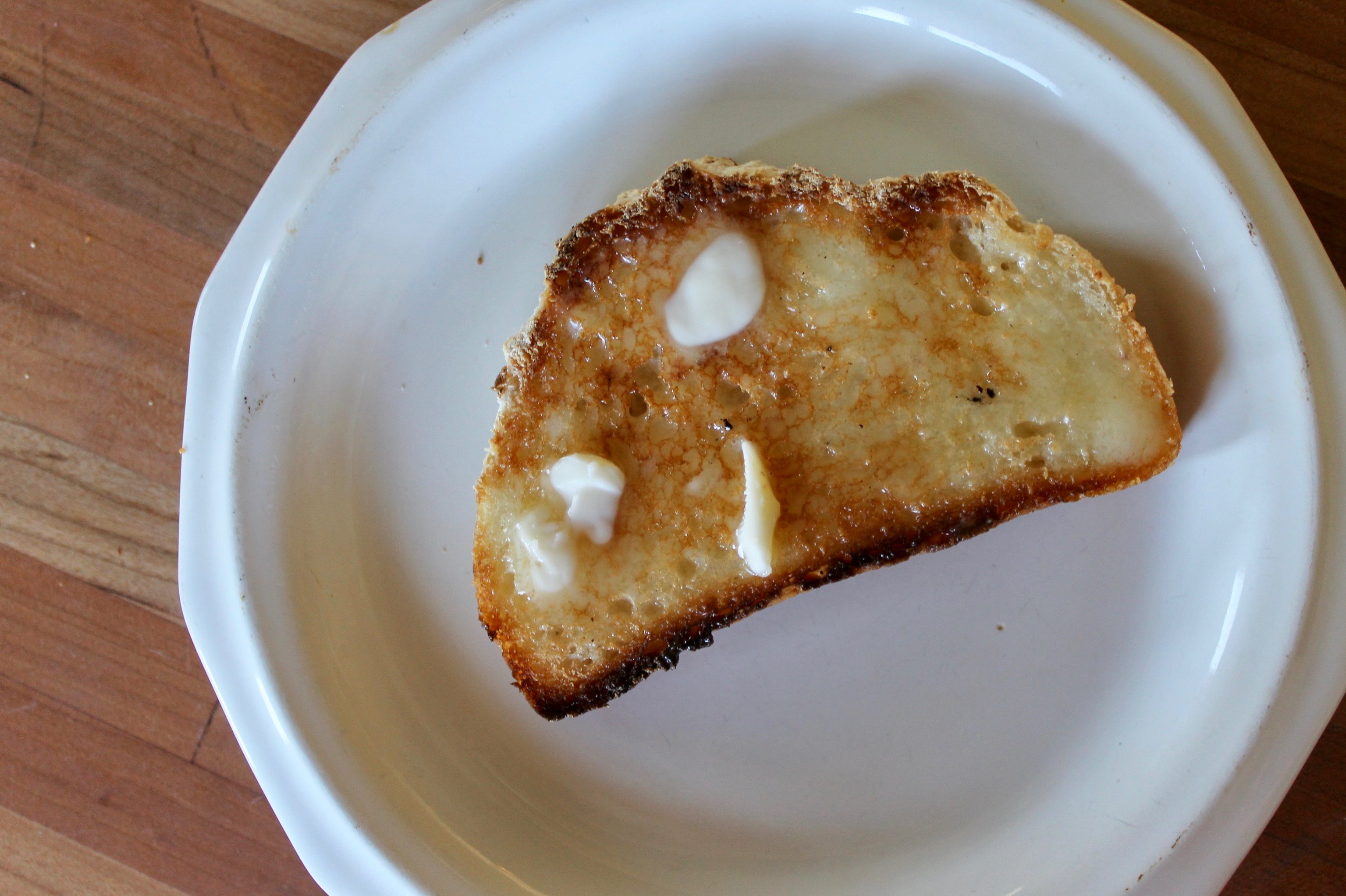 Toasted, with butter and jam, it’s delicious, and even though I’m not gluten-free, I eat it willingly (or I would eat it if I wasn’t saving it all for my husband). 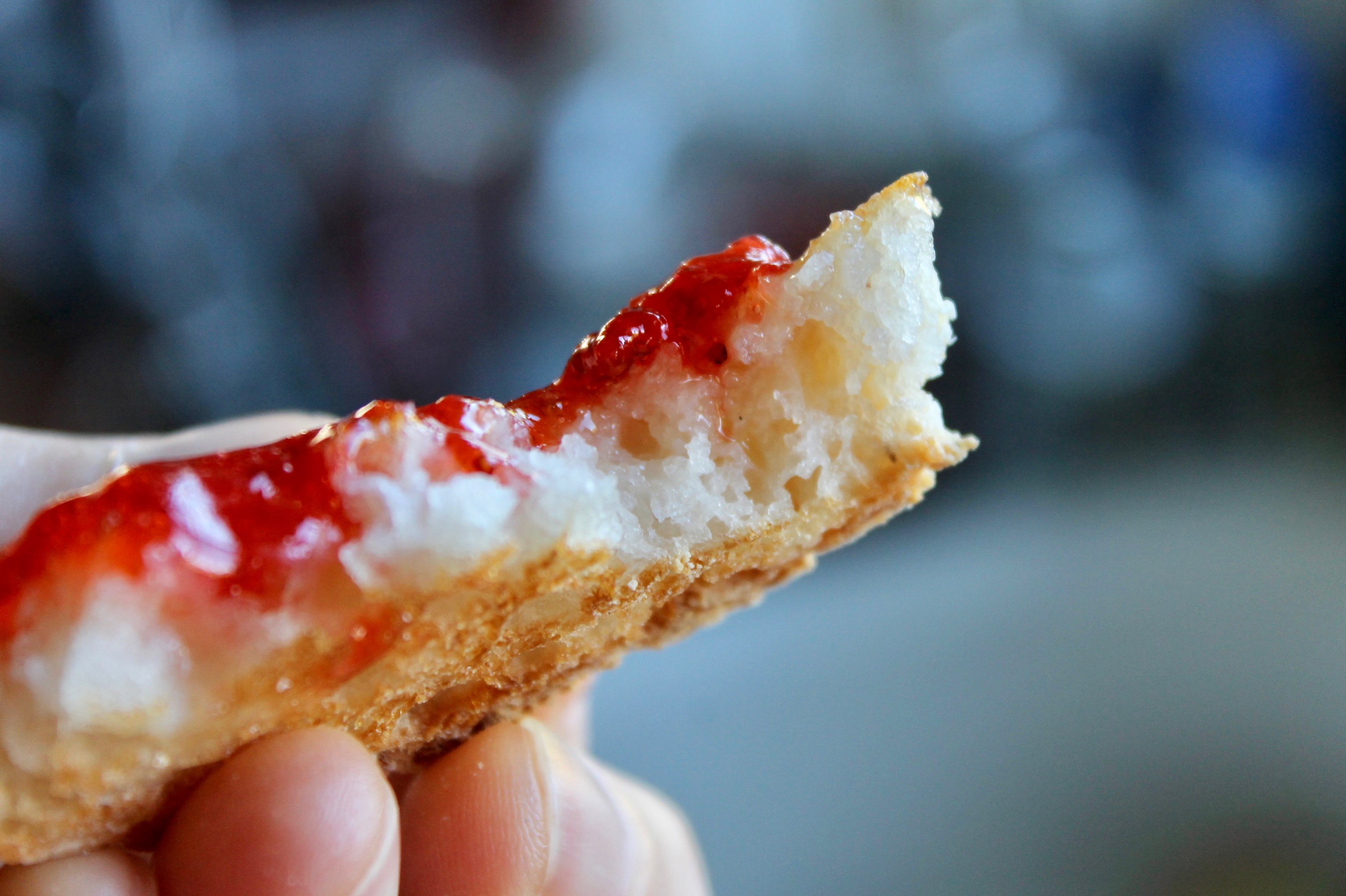 And then just as I was getting into the swing of things (stocking up on tapioca starch and xanthan gum, contacting GF bakers, finding GF blogs), my husband did another gluten test. This time, wouldn’t you know, he had no negative reaction.

We tested a couple more times since but with mixed results. Sometimes he has stomach pain when he eats gluten, and other times he eats it and then feels perfectly fine. It’s all very confusing. I’m convinced he needs to adopt a scientific approach — tracking his diet and monitoring his symptoms — but that would require him to remember to do that, and he and I both know that’s probably not going to happen. 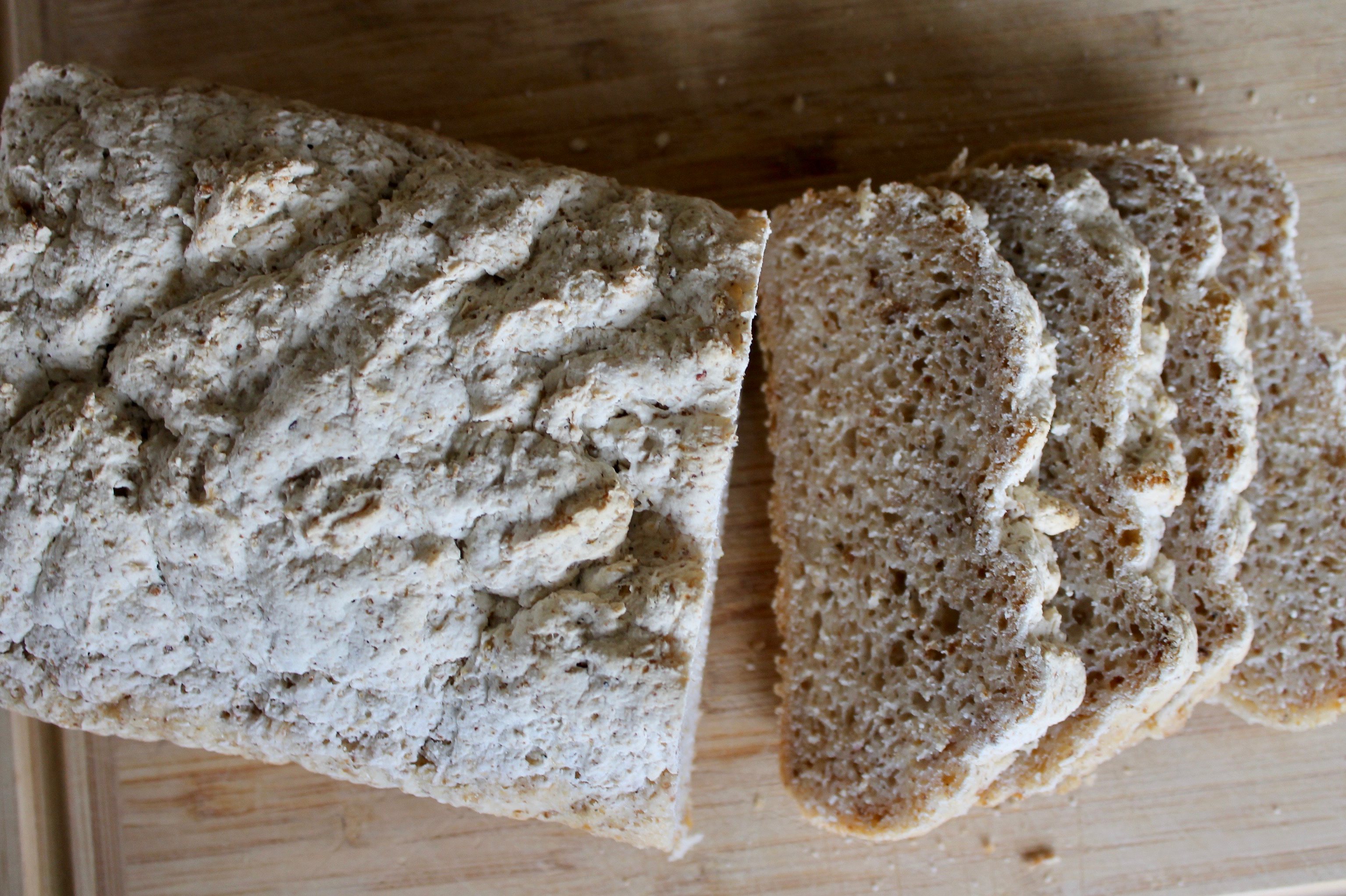 So now I’m back to cooking however I want, and he eats however he wants. Whatevs. It is sort of disapppointing, though. I would love for him to feel better and, all things considered, eliminating gluten would’ve been a small (and easy) price to pay. 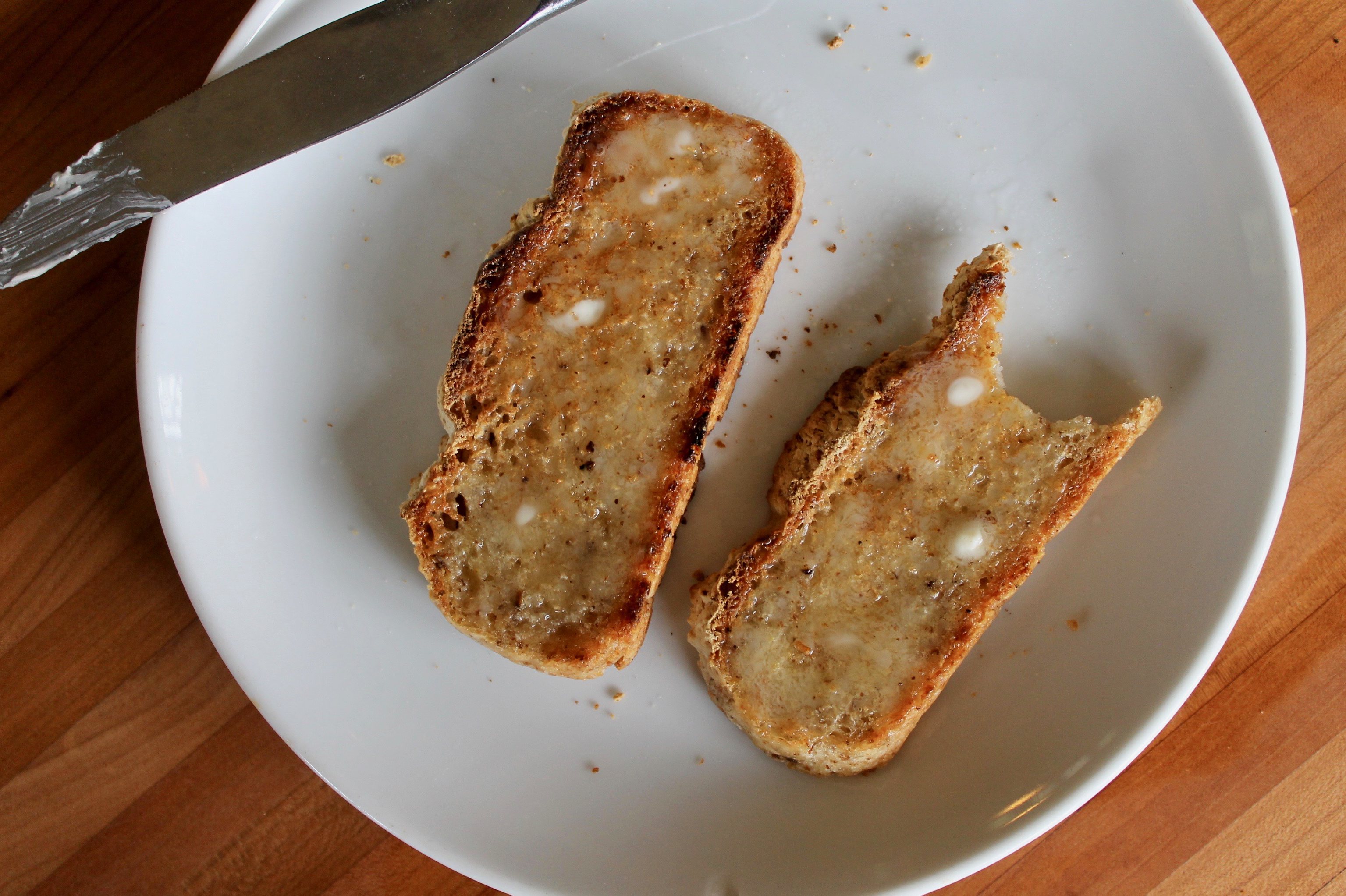 Oh well, at least now I know how to make a yummy gluten-free bread.

Gluten-Free Bread
Adapted from a screen shot of a recipe that my sister-in-law sent me.

There are lots of other GF breads and methods out there (including, I hear, sourdough!) so I’ve only scratched the surface. Which makes me feel hopeful — there are options should my husband actually need them. GF bread is doable. Be ye (me) not afraid.

The original recipe called for black olives and caraway seeds; I skipped both. Also, it called for sorghum, which I didn’t have. My sister-in-law said I could substitute millet flour, but I didn’t have any of that, either, so I ended up using more rice flour and the all-purpose blend. But then a couple days ago when I was digging around in the basement freezer, I discovered a five-pound bag of millet flour, oops!

In a mixing bowl, stir together the water, honey, and yeast. Once the yeast begins to bubble, stir in the psyllium and let it rest for ten minutes. Add the remaining ingredients and stir to combine. The batter will be like a stiff, spoonable cookie dough. (If it’s too runny, add more of the all-purpose flour blend.)

Line a loaf pan with parchment paper and, if you wish, brush it with canola oil. Spoon the dough into the pan and smooth the top. Cover with a towel and let rise until double, about one hour. It will not rise at all in the oven, so make sure the bread is well-risen prior to baking.

Bake the bread at 400 degrees for 45 minutes. Remove from the pan and set the loaf directly on the oven rack and bake for another 15 minutes. The tops of my loaves always take on a whitish hue.

Let the loaf cool to room temperature before storing in an airtight bag. Wait to slice the bread until the second day — if you cut into it the same day, it will be gummy.

This same time, years previous: facts, the quotidian (5.29.17), simple lasagna, the quotidian (5.30.16), an evening together, in her element, spicy cabbage, the race we saw, showtime!, the saturation point, barbecued pork ribs.