It’s marvelously dark and dreary today. Cold, too. I got up in time to go running before it rained, the clouds so low my head practically brushed against them. Now, my exercise gotten, I can actually enjoy the closed-up, cozy house.

I’ve been drinking lots of coffee, and this morning when I was writing, my younger son brought me a mason jar of steaming hot chocolate. I procrastinated on eating breakfast and ended up missing it altogether — but hot chocolate is practically a meal, right? — and then when I went downstairs around noon to check on the kids’ jobs and school work and pull out leftovers for their lunch, nothing appealed to me. Instead, I mixed up a batch of herby garlic flatbread dough — and I got a hunk of feta out of the freezer to thaw — before disappearing back upstair to my room with an apple. 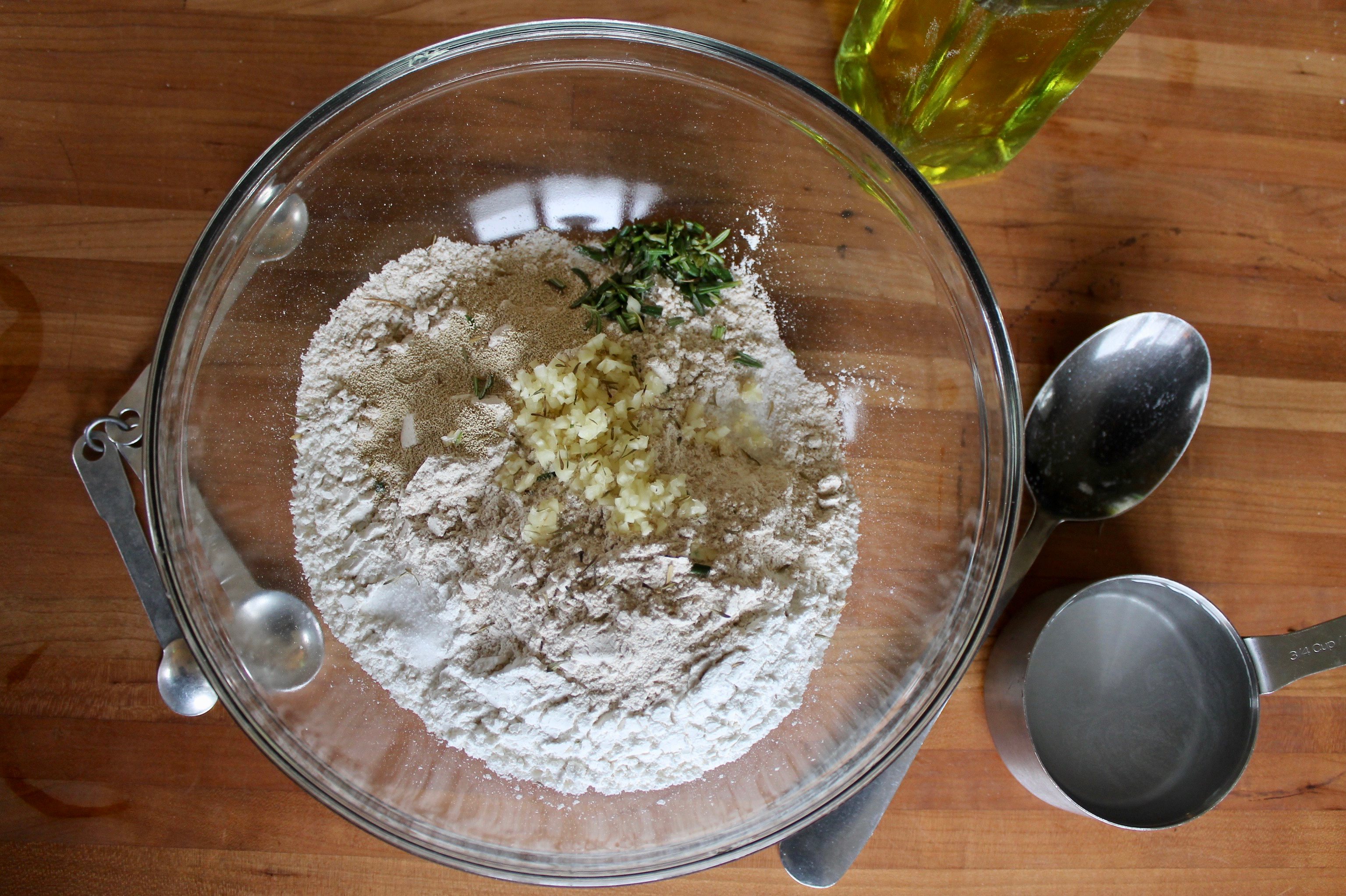 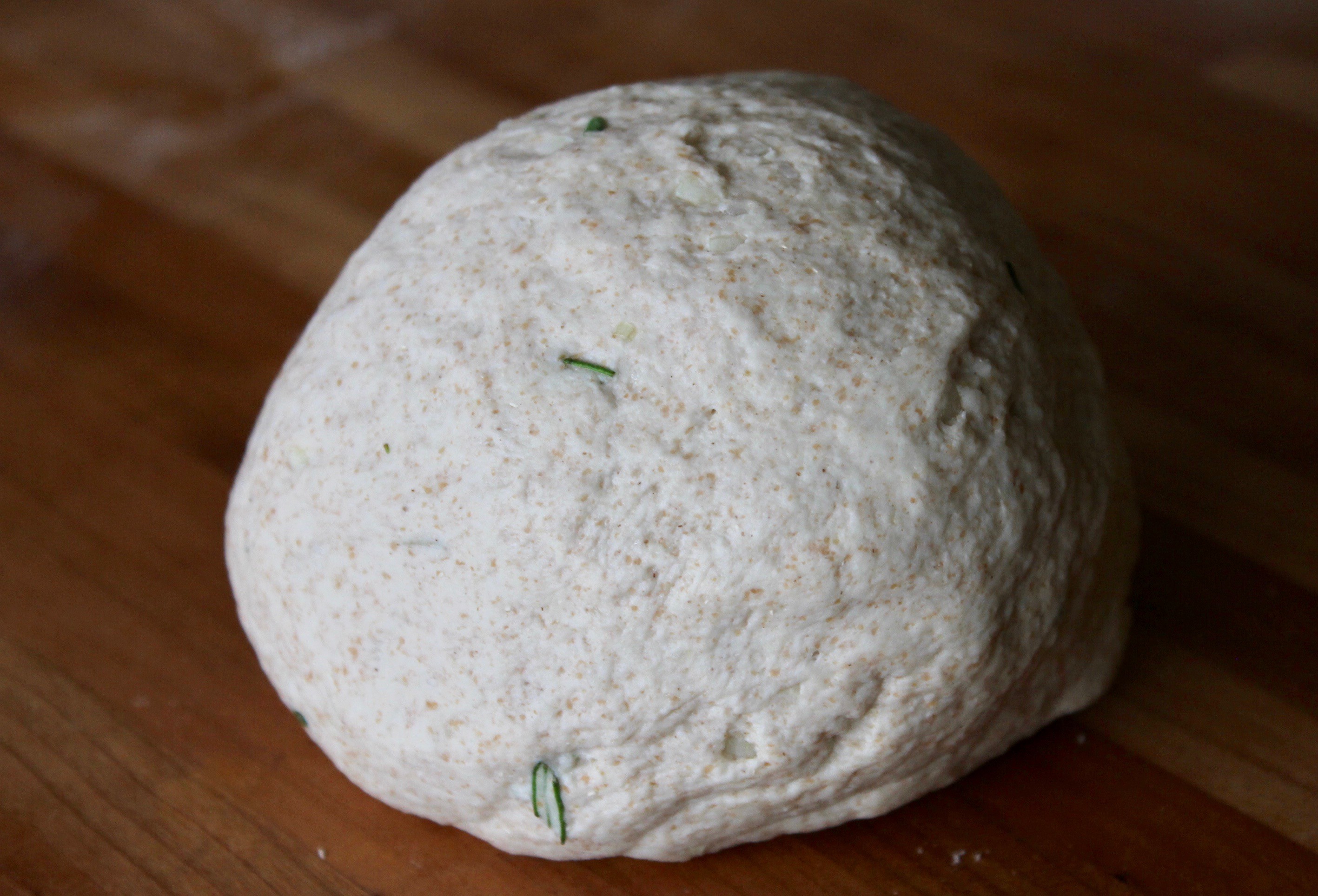 Soon, though, I’ll go back downstairs and fry up the flatbread. I want to take photos so I can share the recipe with you. And I want to eat some. It’s nearly two o’clock, and I’m beginning to get hungry.

But first, let me fill you in on some ailments that I’ve been meaning to tell you about. Maybe you’ll have some advice.

Ailment 1
I have a problem with my eyes.

During the night, or after sleeping, it sometimes feels like the insides of my eyelids are covered with hard bumps that grate against my eyeballs. Sometimes this happens for weeks on end, and then I’ll go for weeks with no pain at all. When it’s really bad — and by “bad” I mean it feels like my eyeballs are being scraped with a cheese grater, or an ice skater is waltzing over my retinas — I have to sit up in bed, unmoving and holding myself at a weird angle (I can’t lay on my back), until the pain subsides.

This all started soon after I had that horrible case of pink eye several years back, so I just assumed that I had some scar tissue on my lids. Over the phone, I asked my eye doctor’s receptionist about the problem, and he said that yes, pink eye can leave scar tissue, but when I asked the doctor himself, he looked at my lids and said, Nope, no scarring, just mild eye dryness. And then he suggested I make moisturizing my eyeballs a part of my nightly regime.

Which I’ve done to little effect: It helps in the moment sometimes, but it doesn’t do a thing to ease the whole problem.

So now I’m thinking I either need a new eye doctor or eye surgery to remove the scar tissue that I don’t have. Or maybe I ought to learn to sleep underwater.

Ailment 2
Earlier this spring, I suffered a horrific case of allergies. For weeks, my sleep was interrupted with nose-blowing. I’d even sneeze while sleeping (except then I’d be awake). Over-the-counter, 24-hour allergy pills did little to help — I tried two kinds — and even Benadryl didn’t do much. Since nothing worked, we started wondering if I was allergic to something in our room. The pillows, perhaps? So I stopped sleeping with them. It helped, for a little, so I bought an allergy-free pillow. But then the sneezing and sniffling came back anyway.

At my husband’s routine appointment with the allergist, he asked about my situation. The doc brushed it off, saying that it’s very unusual that adults develop seasonal allergies — which surprised me. Is that really true?

Anyway, after a couple months, the problem disappeared and now I’m totally fine — no meds and back to sleeping with my feather pillows.

Humph. Maybe we need a new allergist, too?

Ailment 3
Last week I cut off the tip of my finger. I was slicing a hard crust of sourdough bread with the serrated bread knife and, well, then I wasn’t.

Hearing my shouts, my younger daughter came, took one look, and walked off, so then my younger son stepped in, ransacking the house for bandaids and helping me slap them on.

My finger (and thumb, because I’d nicked that, too) bandaged, I sat down in the rocker and, furious and hurting, began crying, which scared my younger daughter who then called my husband who was in the middle of lifting a wall and, upon hearing the tale, got woozy. He offered to come home but I told him no — since the tip of the finger had still been attached (I had contemplated tearing it off the rest of the way but, deciding that the wound would be less painful with a lid on it, I just put it back down and bandaged it on), I figured there was nothing to do. Either it would reattach, or it’d fall off and I’d have a permanently short finger.

(And then my older son got on the phone. “Hey Mom. I understand that being a new amputee can be hard. Would you like me to arrange a therapy session for you?”)

That evening, when I rebandaged the finger with supplies my husband had bought at the pharmacy, I discovered that I’d taken off a part of my nail, too, and that actually, it ‘twas but a mere flesh wound, all things considered. Two days later, I started running again and it didn’t even throb.

And now it looks like the top of the finger may actually be reattaching, whoo-hoo!

Now, my ailments covered, how about some flatbread? 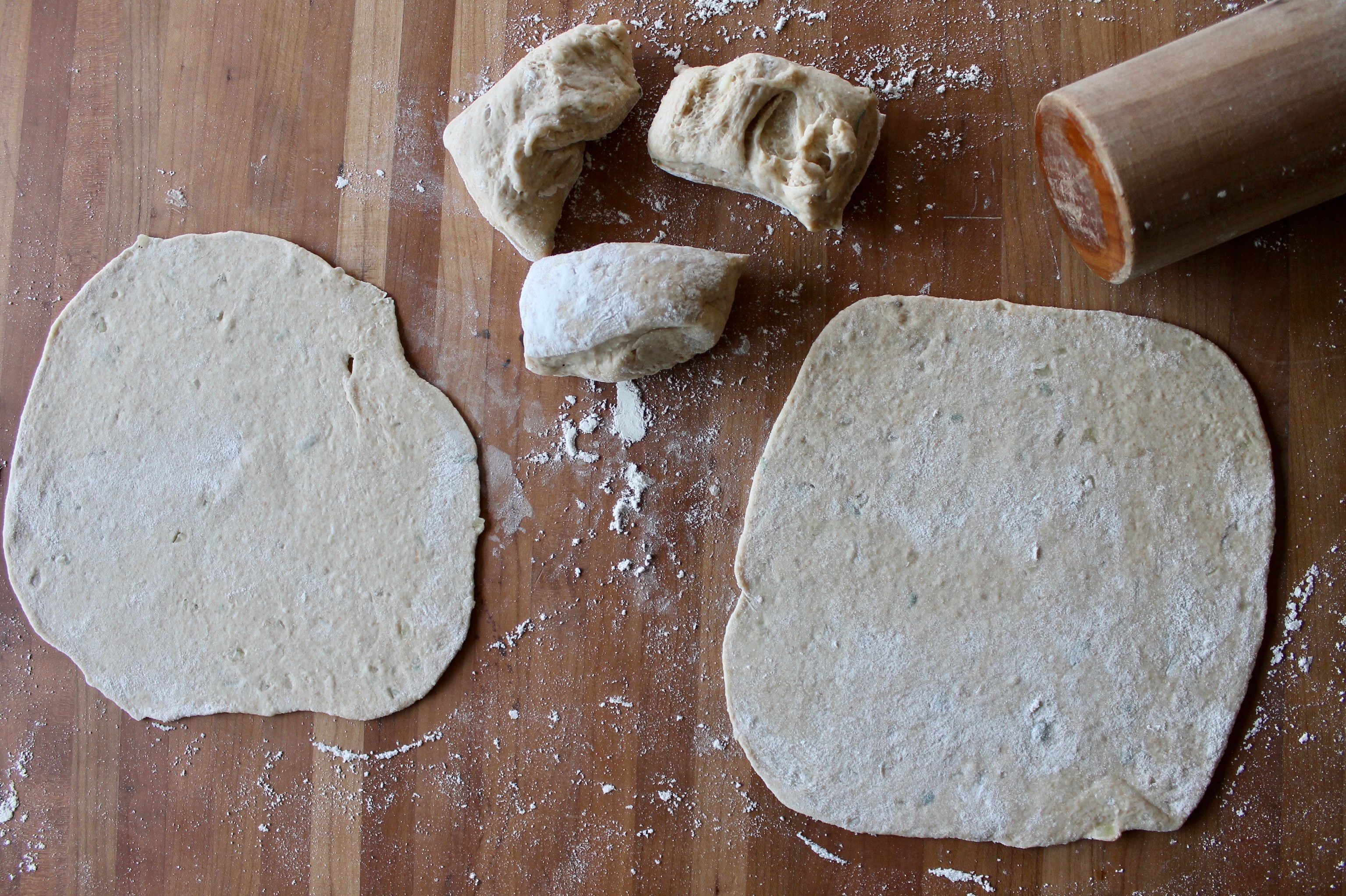 Ever since failing at Nadiya’s flatbread (why the hype over yeast-free flatbread when a little bit of yeast makes such a difference?), I’ve had a craving for the stuff. Yesterday I researched a bunch of recipes before landing on one that called for mixing fresh minced garlic and herbs into the dough. It was spectacular. Pliant and tender, billowy and flavorful, it’s the perfect addition to any curry dish or Middle Eastern meal. 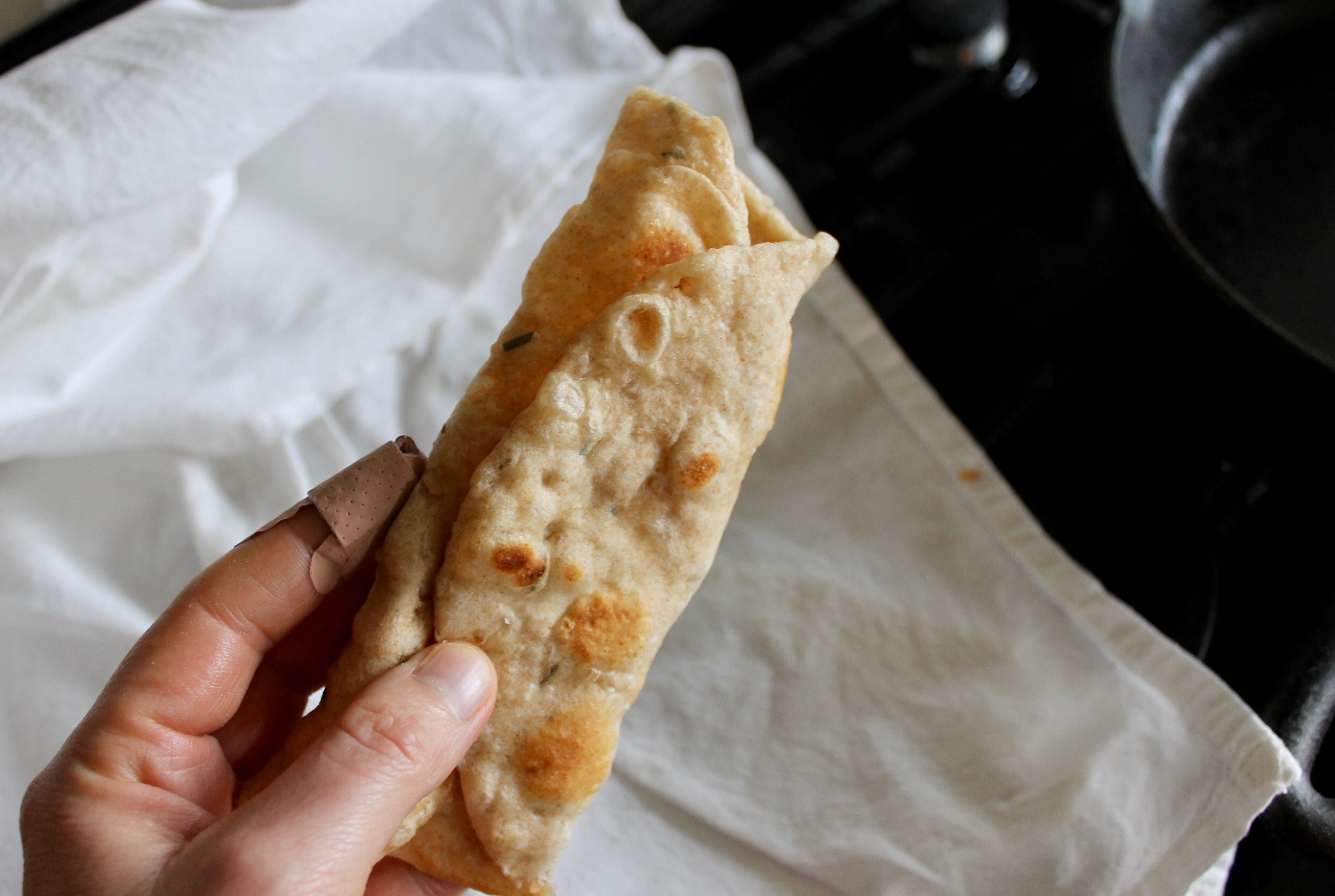 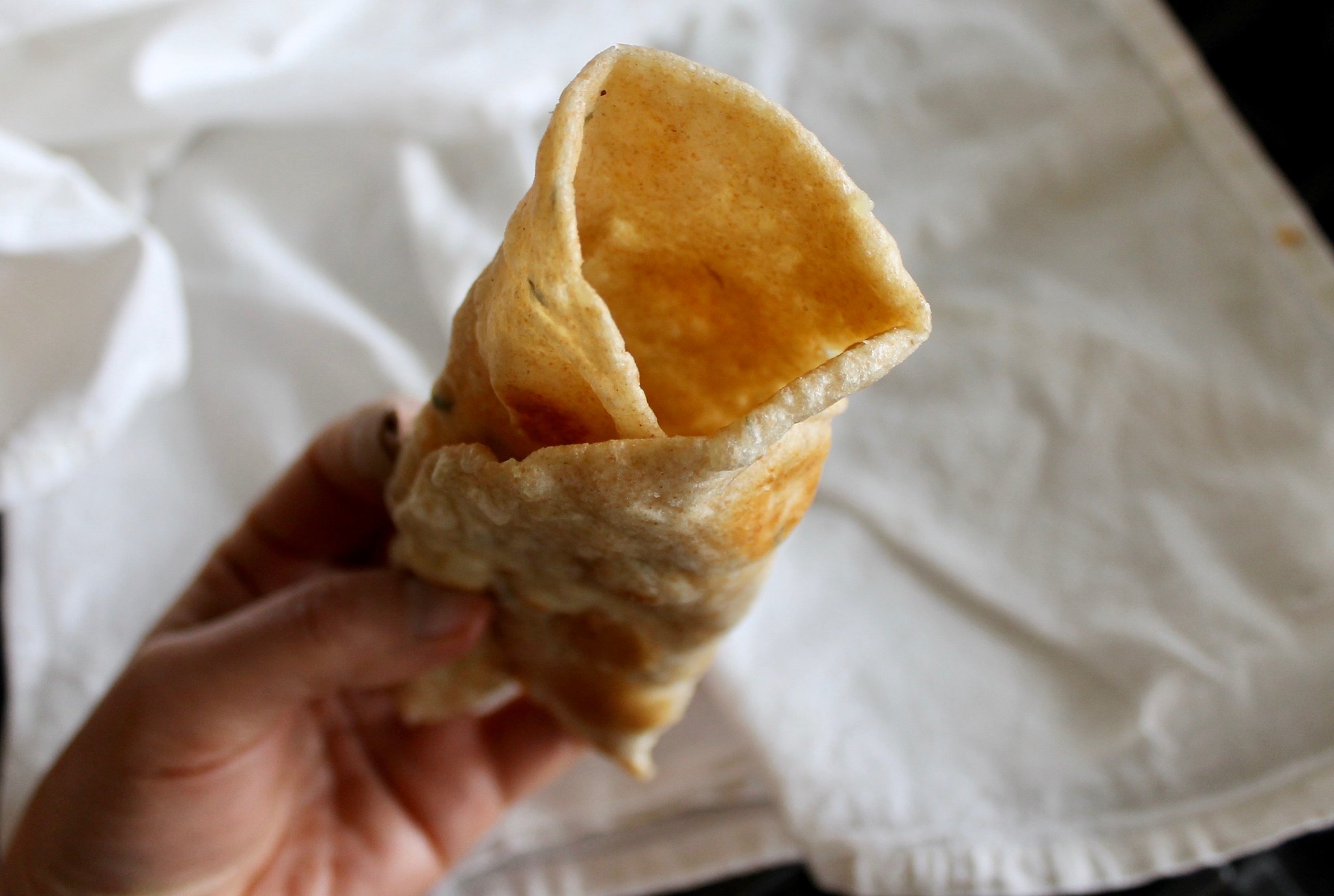 This afternoon, I ate it warm, wrapped around kalamata olives and chunks of creamy feta. It was truly sublime — the perfect afternoon snack — and so incredibly easy to make. 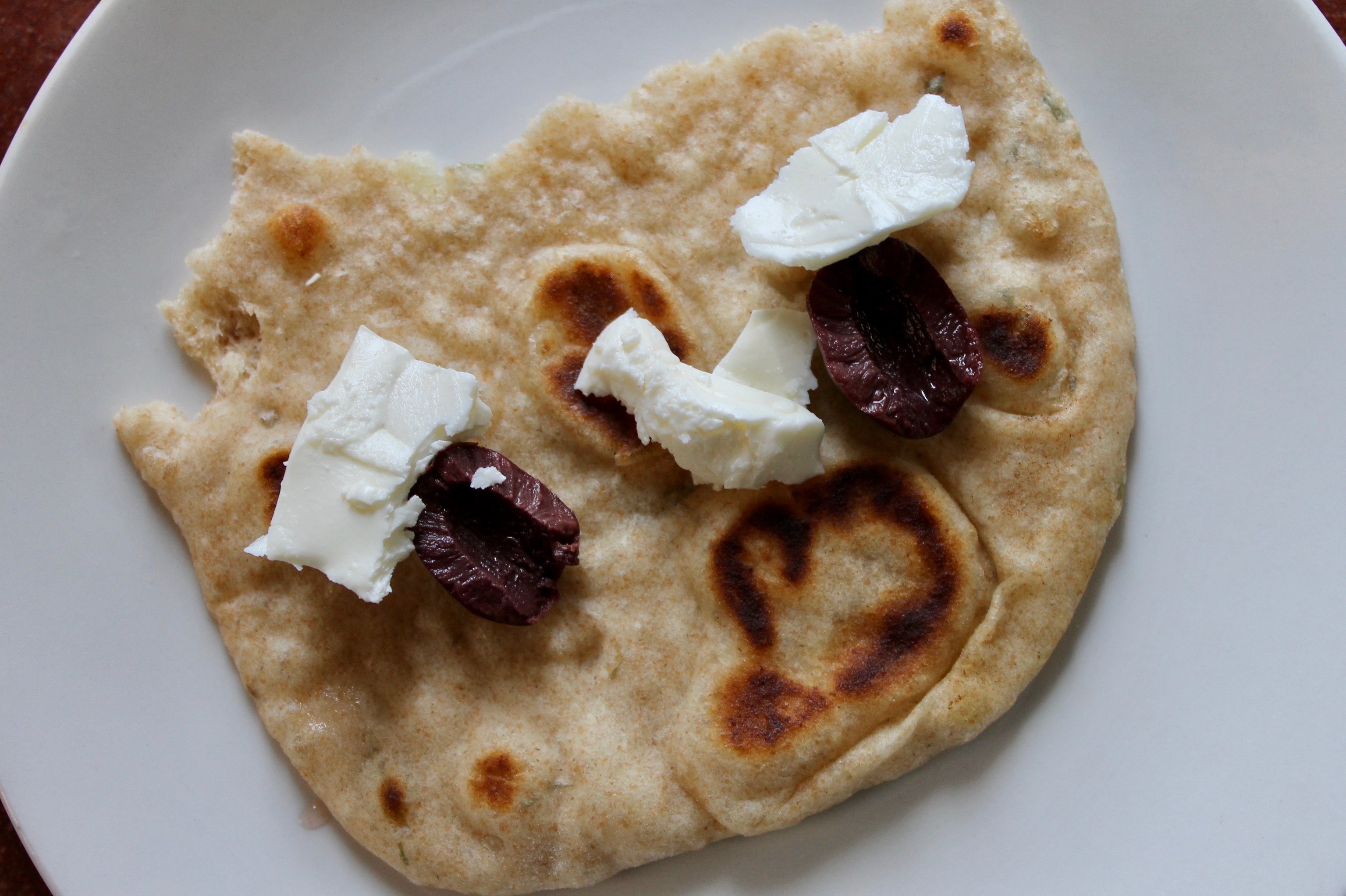 This recipe, I think, is one you’ll want to memorize. Get to it!

P.S. My younger son just came down and reheated the last piece, brushing it with butter and then sprinkling it with feta and drizzling it with lots of honey: 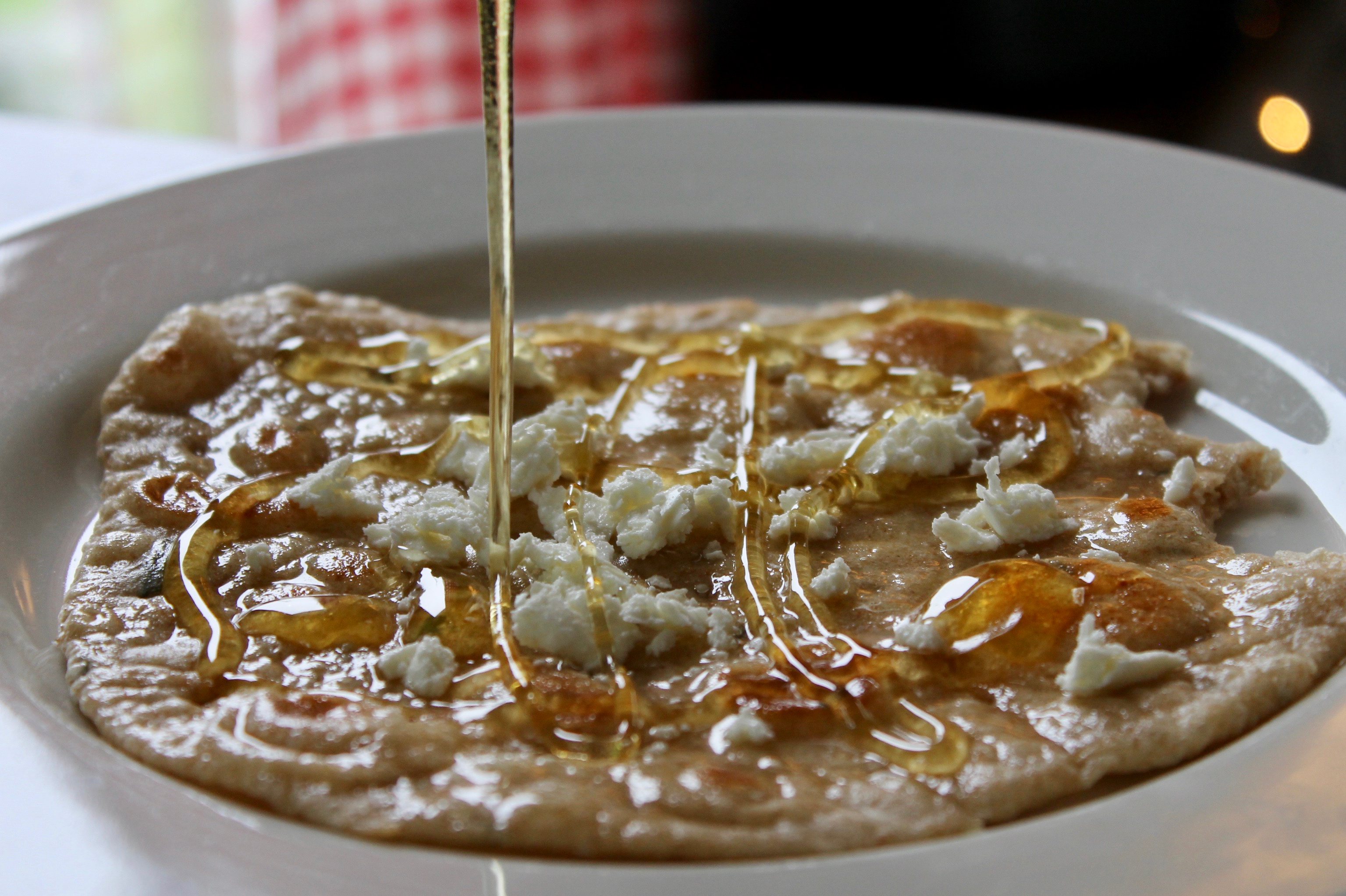 Garlic Flatbreads with Fresh Herbs
Adapted from The Minimalist Baker.

If you don’t have fresh rosemary, you can use fresh thyme or oregano or dill. Or use all dried herbs — they’ll rehydrate when you add the warm water. Basically, try to aim for a tablespoon of fresh herbs, and a pinch or two of some dried, if you want. But whatever you do, you must use fresh garlic. It’s what makes this bread.

Measure all the dry ingredients and herbs into a bowl and stir to combine. Add the oil and most of the warm water and stir to combine, adding more water, as needed (I’ve never used the full amount). Turn the dough out onto the counter and knead for several minutes. Place the dough back in the bowl, cover with plastic, and let rise for an hour.

Divide the dough into eight pieces. Roll out each piece of dough into thin, flat blobs (circles, ovals, squares, rectangles, triangles, whatever).

Drizzle some olive oil in a hot skillet. Fry one of the flatbreads until it’s bubbling on top and kissed with brown on the bottom. Lift the flatbread, drizzle in a little more oil, and flip, cooking the other side of the bread until golden brown. Wrap the flatbread in a towel to stay warm. Repeat with the remaining flatbreads.