One Sunday morning back when we were still going to church and shaking hands and hugging and handing out bulletins and sharing hymnals and sitting shoulder to shoulder, can you even imagine!?, a friend approached me during coffee hour to tell me that the week before when he’d volunteered to sleep at the homeless shelter, he’d eaten my granola for breakfast. (When our family had made a supper for the shelter, I’d also taken granola and muffins for the next morning’s breakfast.) Turns out, my friend told me, the homeless weren’t huge fans of granola — some of them even appeared not to know what granola was — but he did. He ate it and loved it and now he wondered if I might share the recipe?

“Well, sure,” I said. “It’s super simple, just oats and oil, brown sugar and— Actually,” I interrupted myself, “the recipe’s on my blog.”

“You have recipes on your blog?”

“I’m sorry,” I sputtered. “I’m sorry. I shouldn’t laugh. It’s just, well—” I struggled to tamp down my mirth. “Listen. Go to my blog. At the top of the page, you’ll see a bunch of headers. Click on the one that says ‘recipe index’ and scroll. Then you’ll understand why I’m laughing.”

At an Ultimate game (remember those??) a week later or so later, my friend approached me again. “I went to your blog,” he said. “Now I know why you laughed at me when I asked if your blog had recipes!”

A couple times now, he’s emailed to report on his cooking endeavors. “The apple pie, my gracious … how delicious. Peach cobbler is in the oven now and banana bread will be going in next since the oven is hot already.” And, “A few things I’ve been making: Hashbrowns … awesome! French bread … many, many times, I don’t think I’ll buy bread again, maybe ever. Brown sugar granola … the best. Oatmeal pancakes with a grated apple…wow!”

His messages make me laugh out loud. This — hearing how this little blog has helped broaden someone’s cooking repertoire — is about the best compliment ever, I think. It warms me right up, down to the tips of my frigid little quarantined toes.

So anyway. Yes, I have recipes on my blog, and now here’s a new one: Mojo Cuban Pork.

This recipe is inspired by The Chef TV Show, the one I’ve been slowly absorbing, just two or three episodes a week, like a carefully monitored IV drip line, to stretch out the pleasure.

If you saw the movie Chef, then you know that this pork is what the whole food truck revolved around, and in Chef The TV Show, they touch on this recipe a number of times. Always, the pork looks fabulous. And when it’s used in cubanos? Swoooooon! Last week, I decided enough was enough. I had to make it for myself. 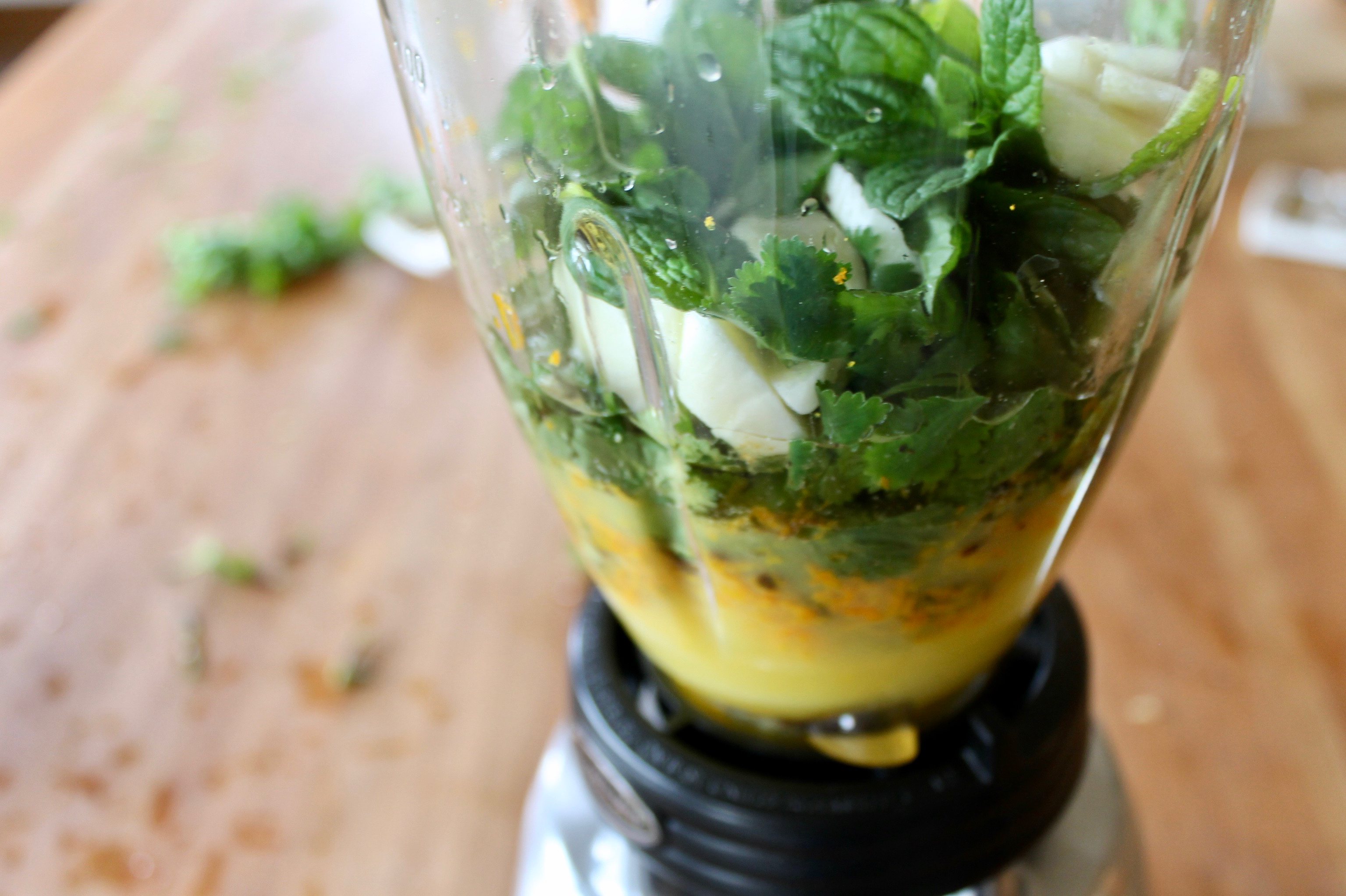 It took a bit of planning. I had to buy a couple special ingredients: the pork, of course, and soft French bread from the deli section, an orange, and thinly sliced ham off-the-bone. But most of the ingredients I already had on hand. 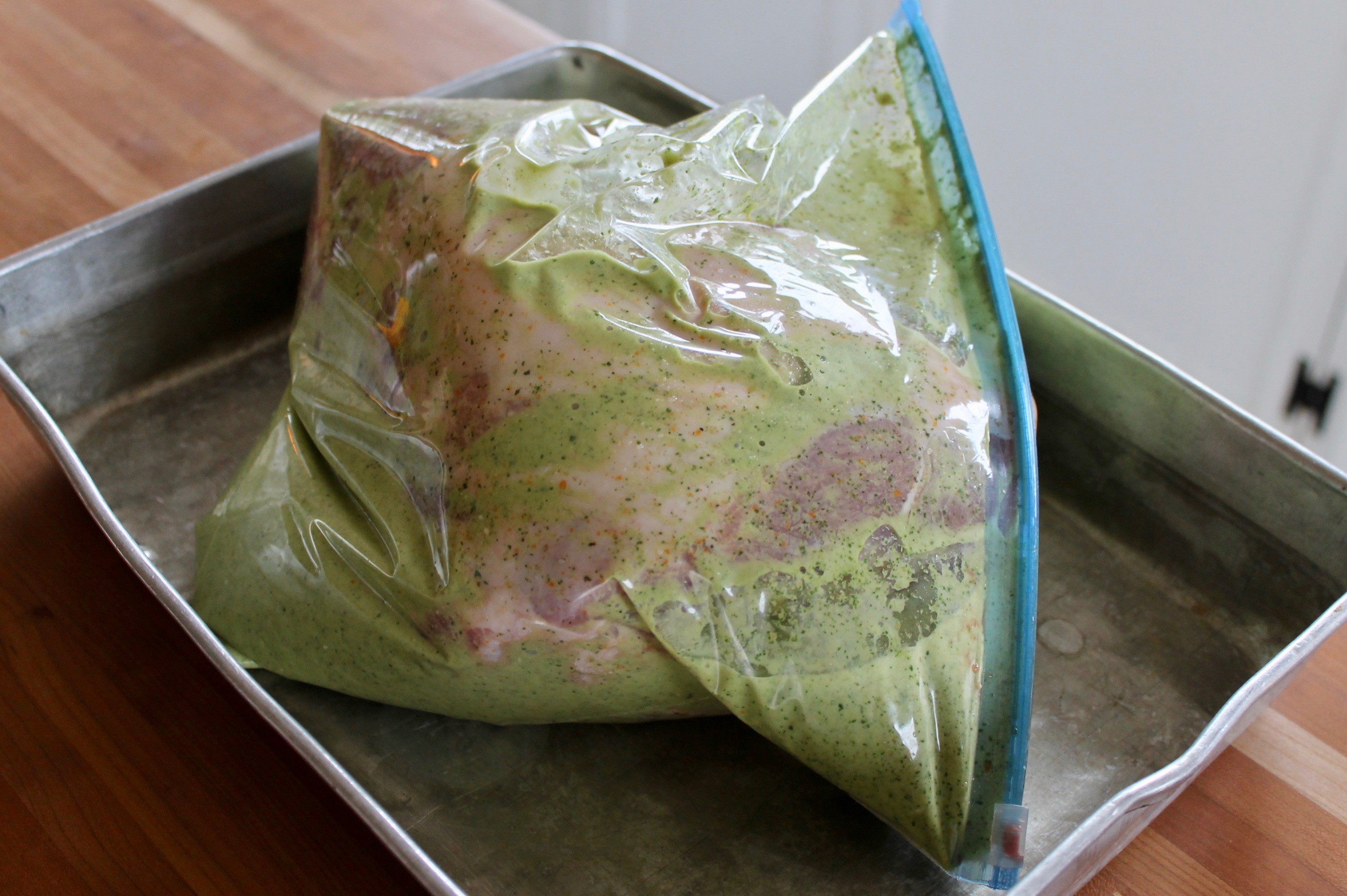 I was a little nervous. Me and large cuts of meat don’t always fare so well. Half the time it turns out great and the other half it’s beyond horrid. And the worst part is, I never know which way it’s going to go. It’s unnerving. 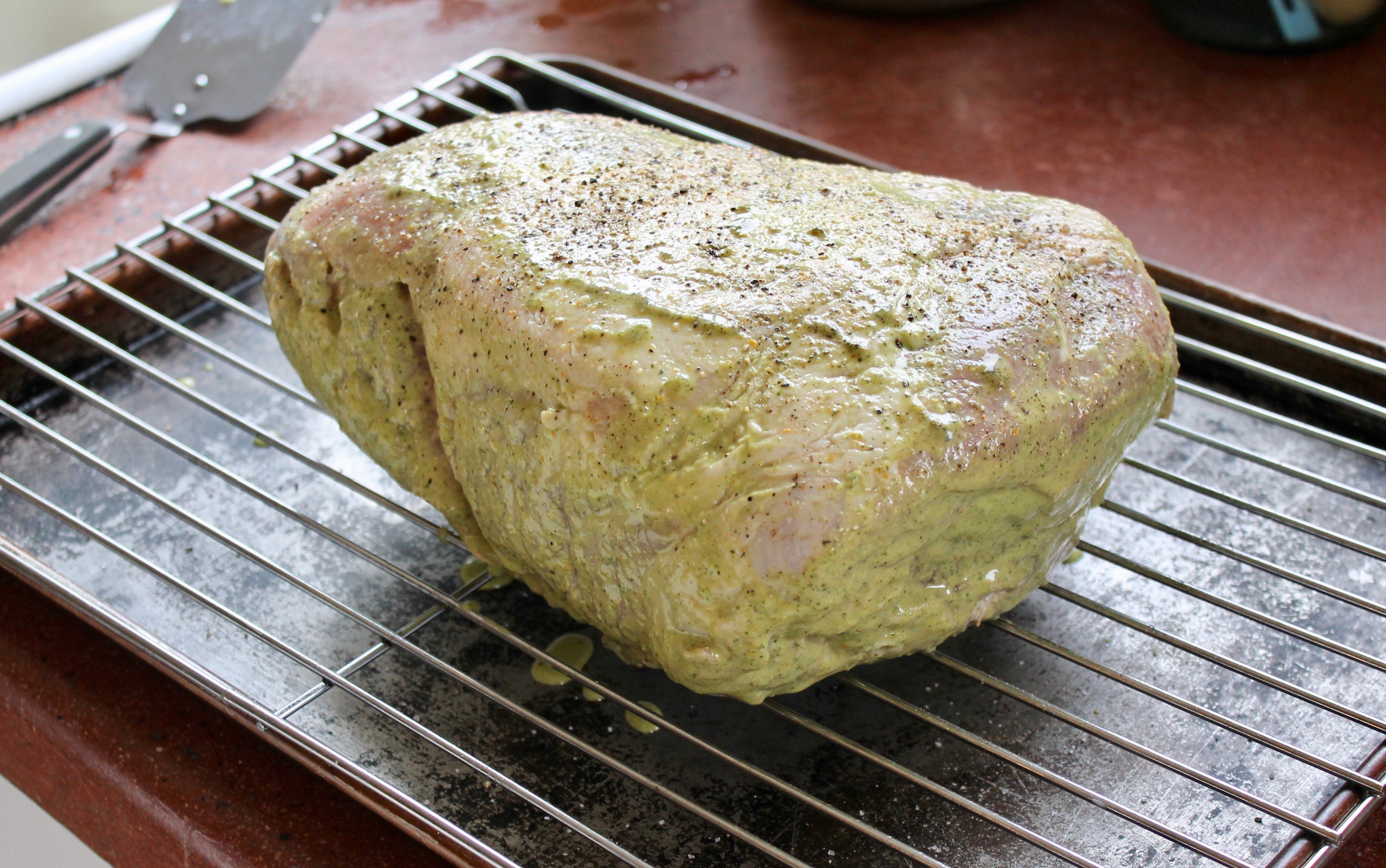 But this meat turned out fantastic. In fact, the pork itself was so incredibly tender that, when I tasted it, I 1) swooned, and 2) snatched up a piece and ran screaming to the barn where my husband was working, causing him to come rushing out to see what the matter was. He ate the meat, nodded, and said, “It’s good,” because he’s understated like that (and probably because he was irked at my screaming). My triumph new no bounds. 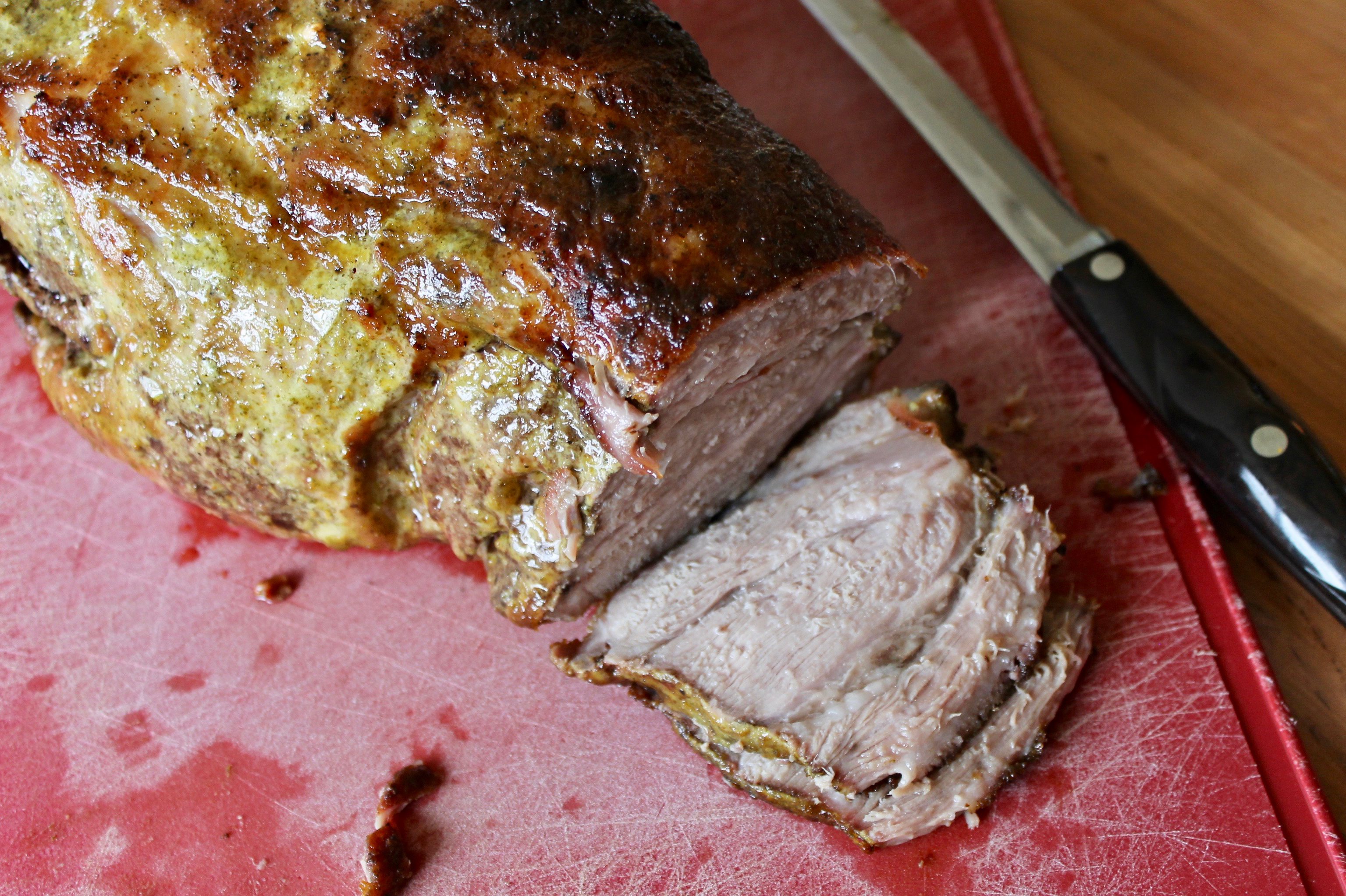 (But then a little later, when I was thinly slicing the roast for the cubanos, I thought the inside seemed a little too chewy. Was it underdone? I wasn’t sure — meat confuses me; we’ve already established this — so after a bit of hemming and hawing, I plopped the remaining half of the roast in a Dutch oven and slipped it back in the oven for another hour or two, at which point it was much more tender, yesssss.)

The marinade for the pork was so yummy it almost could’ve been a drink.

After making this recipe, I discovered an actual write-up of the recipe by none other than John Favreau himself: In his recipe, as in The Chef TV Show, the pork is marinaded in a mixture of spiced rum, orange juice, lime juice, mint, cilantro, and then it’s brushed with a second marinade (similar to the one I made) right before baking. Next time, I might try the two-marinade approach — a marinade with spiced rum? YES PLEASE — but even with just one, it turned out great.

Put all the ingredients in a blender and blend until smooth. Place the pork butt in a plastic bag. Add the marinade and smoosh around to coat. Close the bag, place in a sided baking pan (just in case it leaks), and chill in the fridge for 12-24 hours.

Remove the meat from the bag and place on a rack that’s atop a sided baking sheet; put the marinade in a small saucepan. Salt and pepper the top of the roast. Loosely tent the roast with foil and bake at 325 degrees for 3-4 hours (the meat is supposed to reach 170 degrees, but mine never did). Every hour or so, brush the meat all over with the marinade.

When it’s nearly done, remove the foil, increase the heat to 375 or 400 degrees and bake another 30 minutes, to brown the top. Remove from the oven and tent with foil for 30 minutes before slicing thinly. (If the meat doesn’t feel tender enough, transfer it to a Dutch oven, add a couple scoops of marinade, place the lid on top, and bake for another hour or two.)

Add the roast drippings to the extra marinade in the kettle. Heat through.

Serve the roast hot, sliced or shredded, as desired. If sliced, serve with cilantro-lime rice, and pass the marinade.

If making cubanos and tacos, read on…

Cubanos
In the movie, they spread on the mustard thick. I thought it had to be overkill, so I was much more conservative, using a little mayonnaise to dilute the mustard. In retrospect, all the mustard was totally called for — at table, I added in a whole bunch — and the mayo wasn’t necessary.

Butter is key. Do not — I repeat: do not — be afraid of the butter. 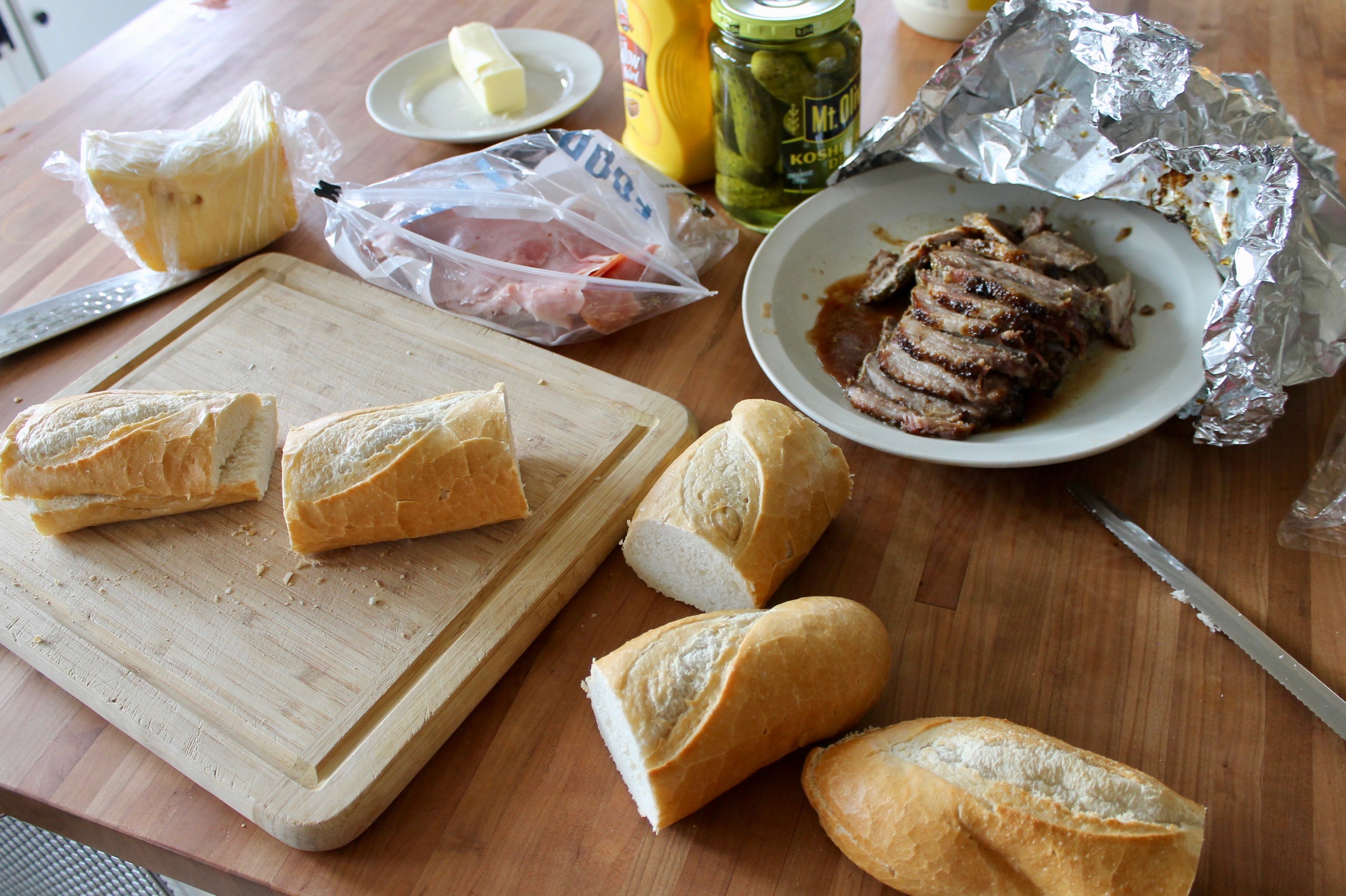 Heat a large griddle. Liberally butter the insides of the cut baguettes. Grill them, cut-side down, until golden brown. Transfer the bread to a tray.

Grill the mojo pork, flipping once, until both sides are lightly browned. Do this over higher heat — you don’t want to overcook (and dry out) the meat. Transfer the meat to a plate.

Quickly grill the ham, flipping once, until heated through. Transfer to a plate.

Spread one side of the baguette with lots of mustard. Add a layer of mojo pork, several pieces of ham bunched up like dirty tissues, a layer of Swiss cheese, a row of pickles. Put the other piece of baguette on top. Liberally butter the top of the sandwich.

To grill, place the sandwich, butter side down, on a griddle set over medium-low heat. Butter the bottoms. (Another option is to just heavily butter the skillet each time you flip the sandwich.) 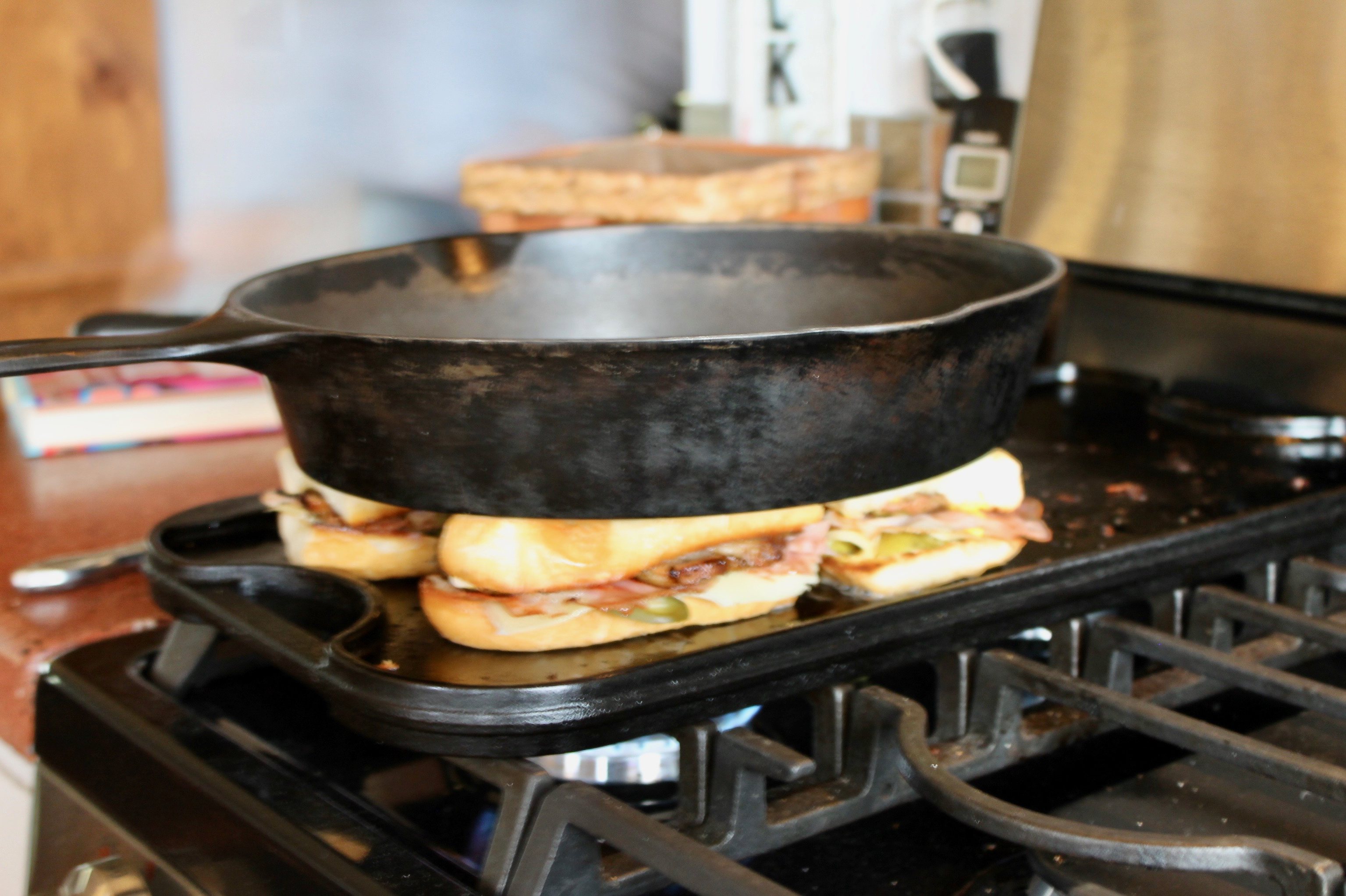 Set another skillet on top of the sandwiches and press down gently. (I preheated my presser skillet, but you don’t need to.) Grill the sandwiches, flipping and pressing, until the outside is toasted and the cheese is melted. 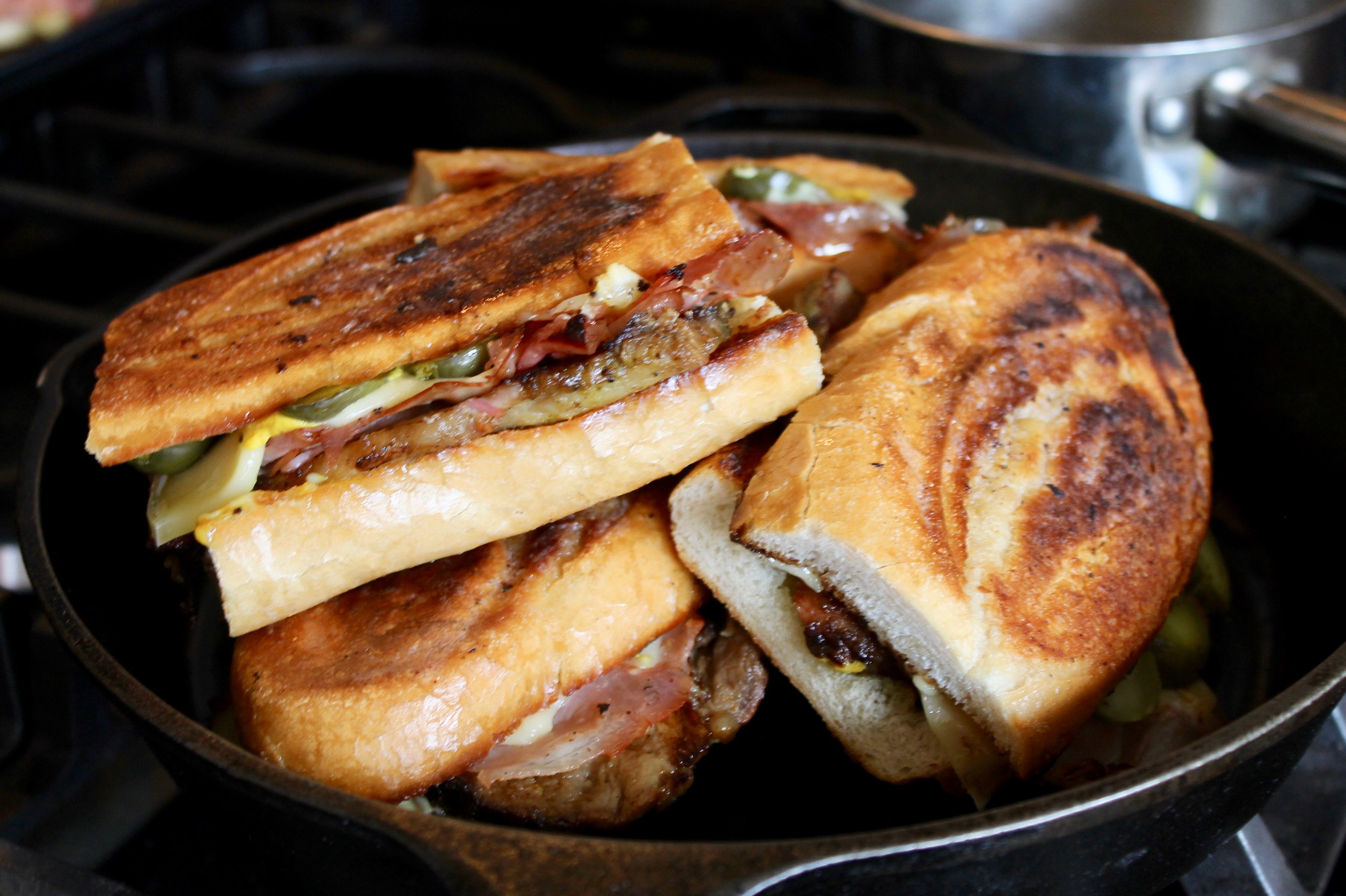 And with the shredded pork and saucy marinade, make… 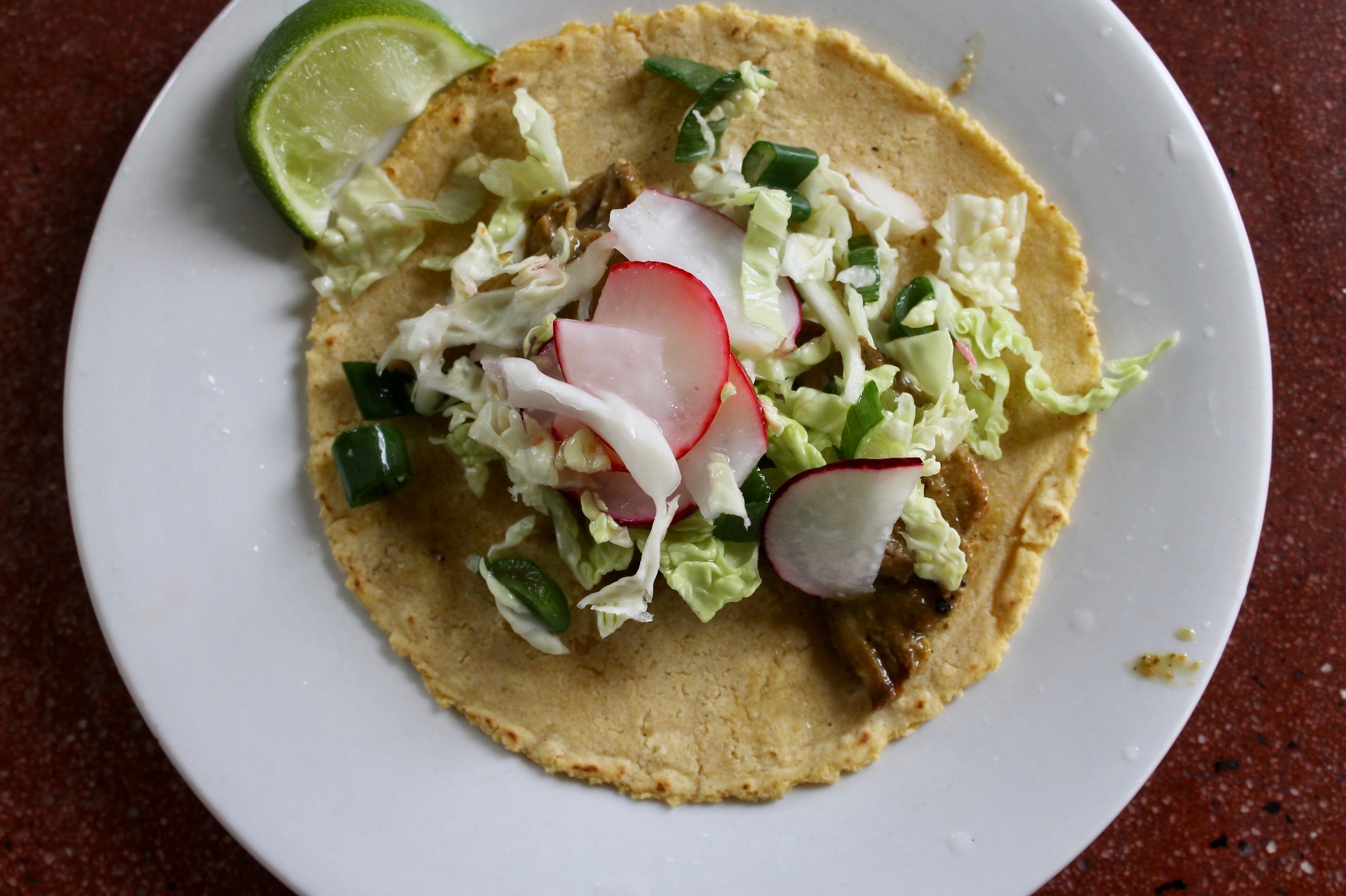 Make some fresh tortillas, throw together the slaw, and heat up the leftover meat. 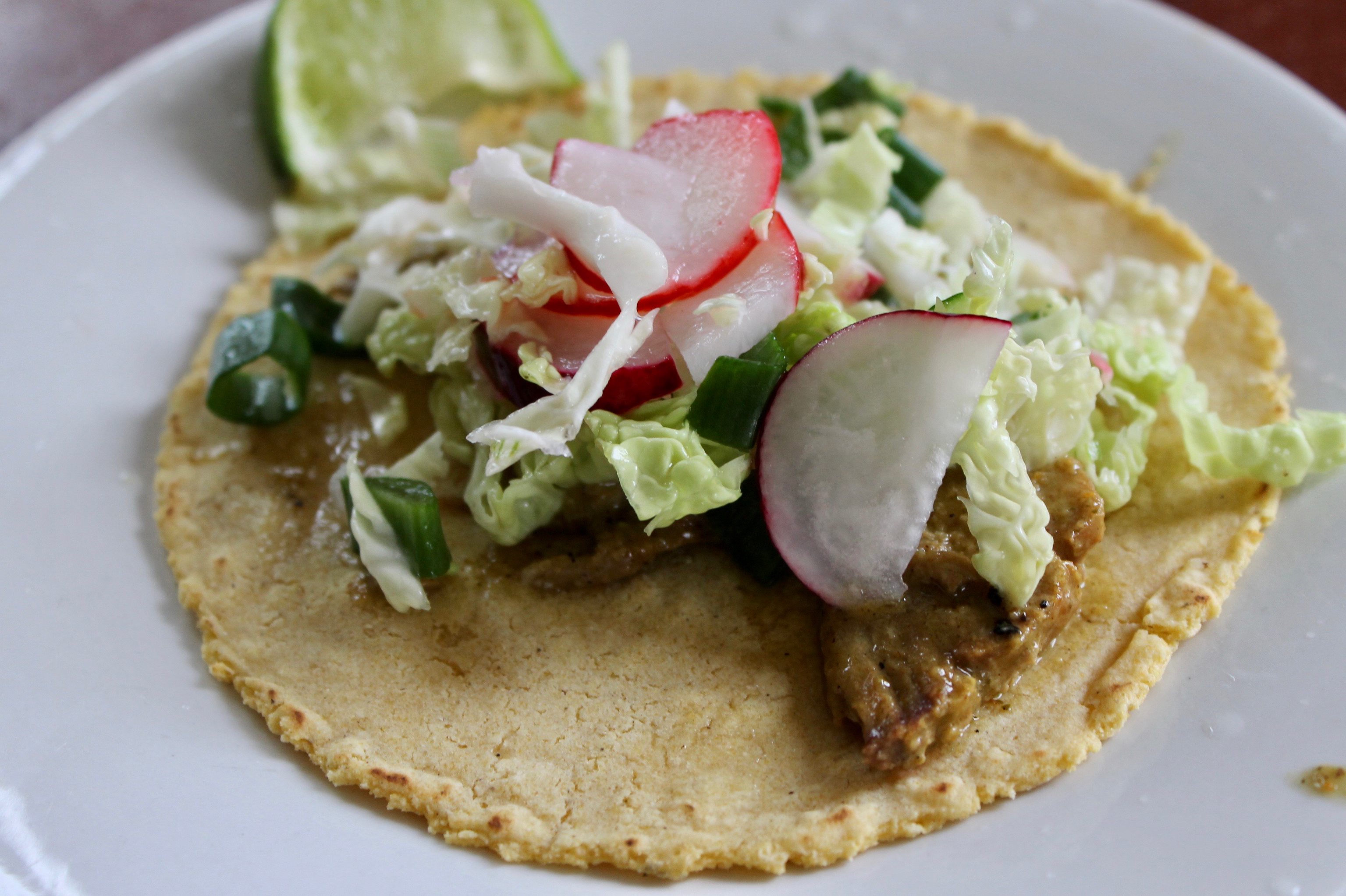