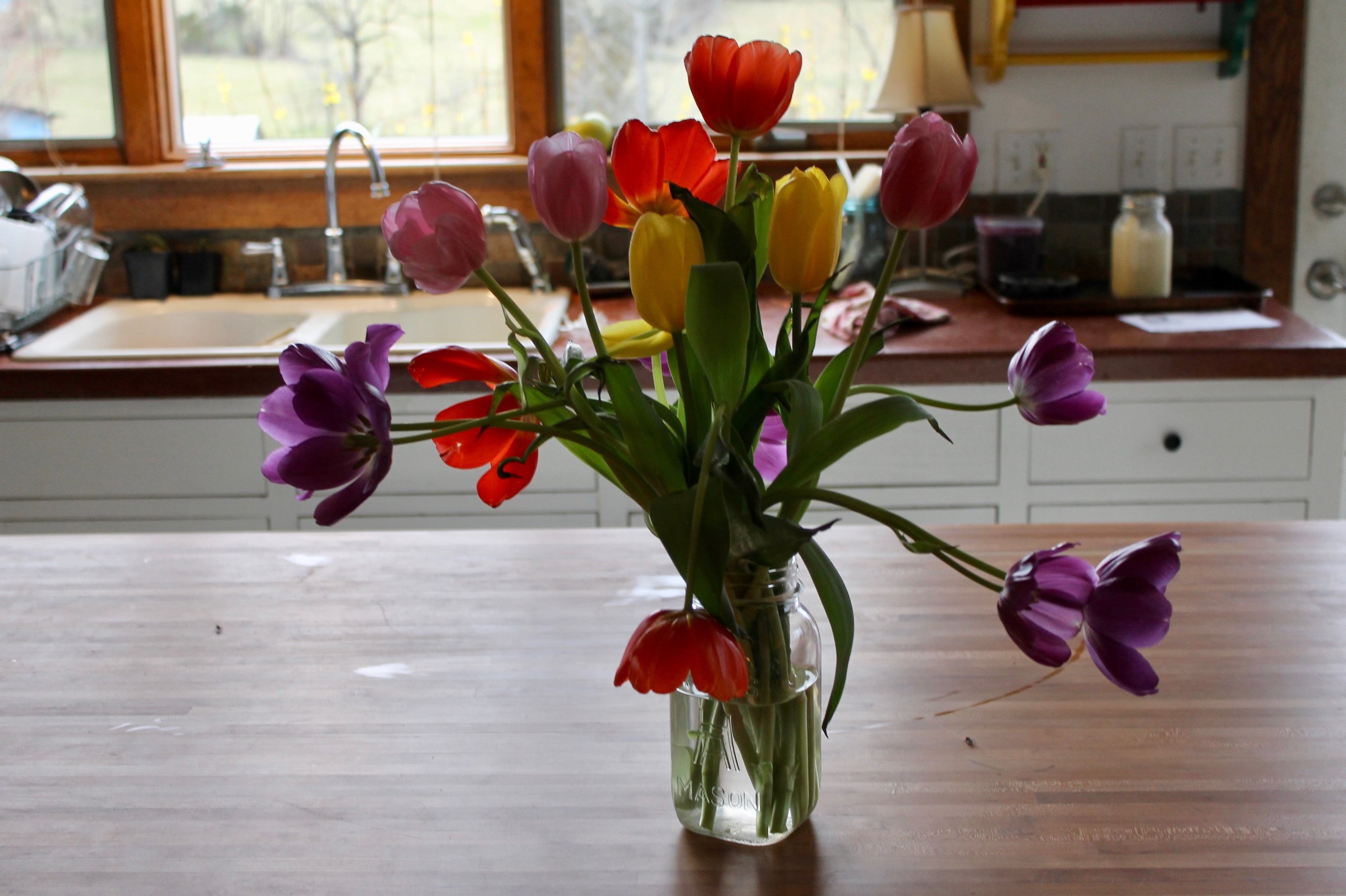 A few years back, I read Station Eleven, a dystopian novel about a world collapse, thanks to an explosive virus. While reading, suddenly every little tickle in the back of my throat, every sniffle and sneeze, every tiny head throb, was The End Of The World. I remember thinking, This is definitely not a book to read if you’re sick.

And now, over the last couple days, Life As We Know It is screeching to a halt, thanks to COVID-19, and, in a weird tongue-to-sore-tooth way, I can’t stop thinking about the book.

And so I put it on hold at the library. Maybe, in light of all that’s going on, it’ll feel less terrifying and more cathartic?

My allergies are going bonkers, which kind of makes it awkward being out in public right now. (I’m not sick! Promise!)

Nights are the worst. Even though I take Allerclear daily, I wake myself up sneezing and then, sometimes for an hour or more, I can’t fall back asleep because my nose keeps running and I have to bolt upright and grab the toilet paper.

The other day my younger son said, “So if all those countries [referring to the ones in Asia and Europe] are shutting down, then isn’t that helping improve the climate crisis?”

Which sparked a conversation in which we imagined what would happen if global leaders treated the climate crisis as a Pandemic. It’s kind of neat to think about…..

Then the very next day, I heard a report on NPR about how China’s efforts to control the coronavirus have led to less air pollution. In just a little over a month, the decrease in China’s greenhouse gasses equaled what a state like Ohio emits in a year — a small amount by China’s standards, but not nothing!

“This is the biggest ‘snowstorm’ you’ve ever had,” I told the kids the other day, after yet another looked-forward-to activity got wiped from the calendar. They’ve — we’ve — never seen such widespread closure. Right now, the novelty blunts the disappointment.

But that will soon change, I know. Already the future feels dulled. No church, no plays and concerts, no trips. An extrovert, I can already feel beginning twinges of the impending downward suck.

How will we cope?

The other night, I messaged my sister-in-law Kim who lives in Hong Kong with her two kids and husband, my husband’s brother. They’ve been dealing with the coronavirus for two months now, and I needed perspective on what to expect. Below are excerpts from our conversation, lightly edited and paraphrased.

“Are schools still closed?” I wrote.

“Oh yes, she said. “Schools have been shut down since the end of January, and they will stay closed until April 20, at the earliest.”

“We go out all the time,” she wrote back. “Shut down = no one on public transportation, no one on the roads. We can see a major highway from our place … No traffic at all since January. To be honest, what seemed like massive overreaction to me now seems very sensible.”

“But what about grocery stores?” I pressed. “Is everything else still running? Like, what about movie theaters?”

“We’ve been to the movies: every-other-row seating and temperature check before entry. Grocery stores all stocked, except for the fancy one that has most of the expensive imported stuff.”

She advised us against going to my grandparents 90th birthday party this weekend (and then it got canceled), and we made sad little lists of all the events we’re missing, or that are up in the air.

“Today is the first time I’ve really felt down about this whole situation,” she wrote. “It’s so out of my hands yet my kids are so affected. I have to keep focusing on the positive. We are almost two months in and it’s the first day of despair.”

A track record which was, we both agreed, pretty darn amazing.

Hearing her perspective was so refreshing.

(Well, except for the part where she noted that the United States is way behind Hong Kong on getting a handle of this. “Hong Kong was massively affected by SARS so people were on the ball straight away,” she wrote. As a result, they’ve only had 129 cases, mostly from overseas. She noted that the United State’s messaging about the virus has been disastrous, as seen from over there, anyway. That part wasn’t quite as comforting, but it wasn’t surprising, either.)

Actually, our family is in an ideal place to handle this sort of thing. My husband works mostly by himself. I write. The younger kids are homeschooled. The girls’ jobs are both outdoors and with few (to no) other people. Over and over, I find myself noticing how much I have to be grateful for.

My older son, though, is having a harder time of it. He’s thick in the nursing program, clinicals, and social events. For him, the changes and the unknowns — What about grades? What about tuition costs? How will this impact the course load for the next semester? — are stressful.

Last night, disappointed and frustrated, he came out to eat supper with us and rant. Afterward, he shuffled around the kitchen, grumpy and on edge. And then he dug out the big bag of gorp began stuffing nuts and raisins into his mouth at a rapid clip.

Goodness, I said, with mock alarm. I’m glad you don’t get a period. You’d be a mess.

Maybe I am getting my period! he shot back.

And then a minute later, his appetite sated, he said, “I feel great now. Maybe I just needed more food?”

For us, life is mostly the same. Tempting as it may be, I don’t want to fall into a Netflix trap so: how to take advantage of this forced break in our routines?

Like I said, I sent the kids to the library today. (Now that we’ve got one COVID-19 case in Harrisonburg, and schools are shutting down, I imagine the library will soon close, too. I mean, the virus can live on surfaces for three days, so do we really want to be passing around books, right?) I’d put the maximum number of books on hold — ten — and told them to get tons more. 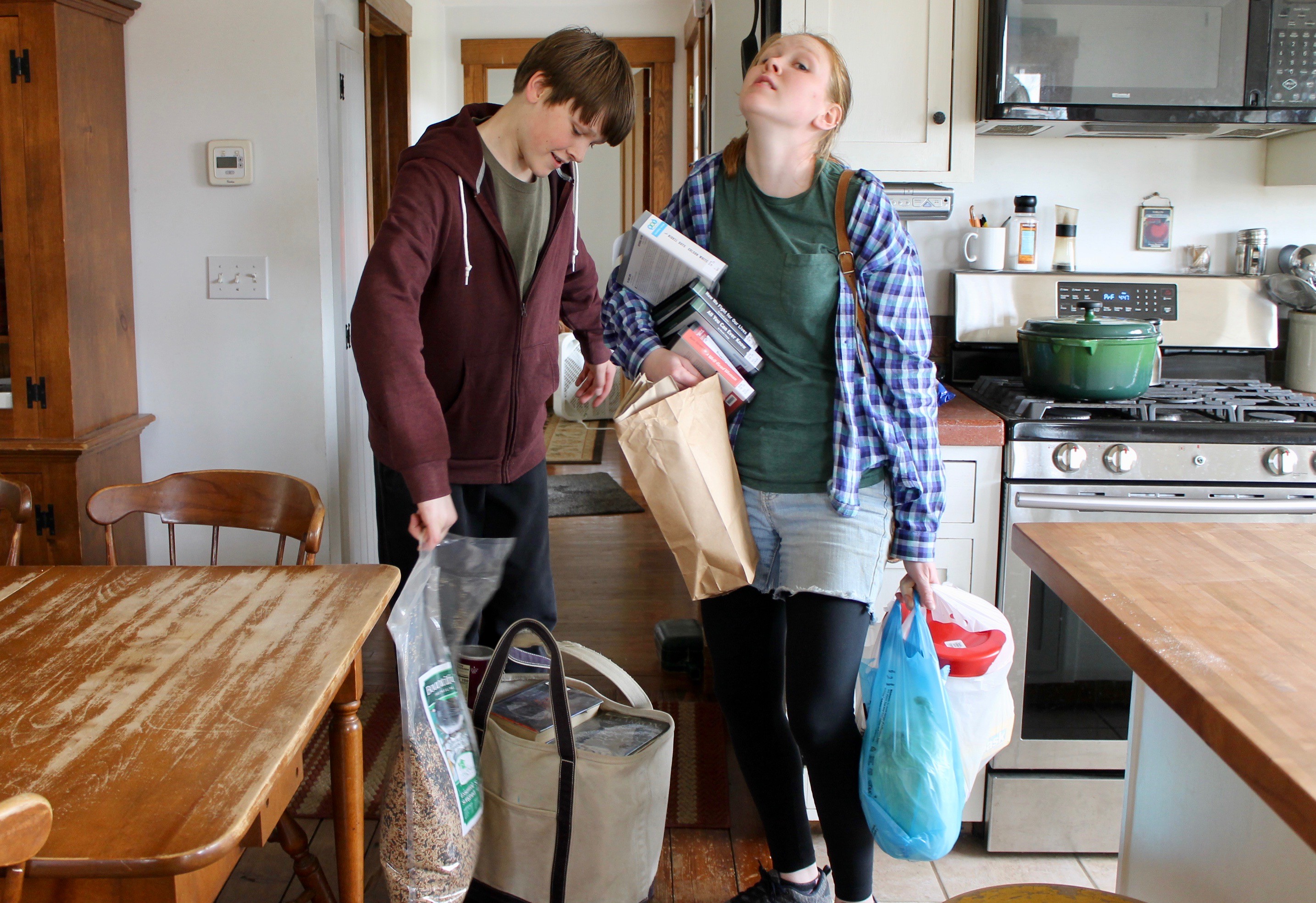 And my daughter is picking up some seeds — lettuce and spinach — from the store. Might as well get the garden ready and pop in a few early things.

I can still go running and cook lots of food, and do homeschooling stuff, blah-blah-blah, but without social outings to liven things up, life feels kind of colorless.

Maybe, if I get really desperate, I’ll clean things? (Nah, probably not.)

From The Atlantic: What Does Social Distancing Mean?
From Vox: 9 Charts That Explain the Coronavirus Pandemic.

And now, for a bit of fun: What Sound Does a Whale Make?

My husband and I were folding laundry when my younger daughter approached. “Hey Mom, What sound does a dog make?”

“Bark,” I said, confused but playing along. “Woof. Whatever.”

And that’s when my older son realized what was happening and started filming….

Have a good weekend, friends. xo!