Anybody recognize what show that phrase comes from? No? Okay, I’ll tell you.

I got it from an episode of West Wing in which “take out the trash” refers to the practice of releasing all the bad news in one giant Friday news dump. Since papers have limited space set aside for White House news, releasing a whole bunch of unsavory information at the end of the week means that the papers have less space to dedicate to each bad thing, therefore minimizing the damage of each news item.

Whew, that was complicated.

Homemade Cornflakes
It’s not as bad as homemade sprinkles, but it’s close. Bear with me.

The recipe (from this fun book) is simple: stir together boiling water with cornmeal, salt, and a little sugar to make a runny slurry that you then bake at low heat until it dries up like a cracked desert. 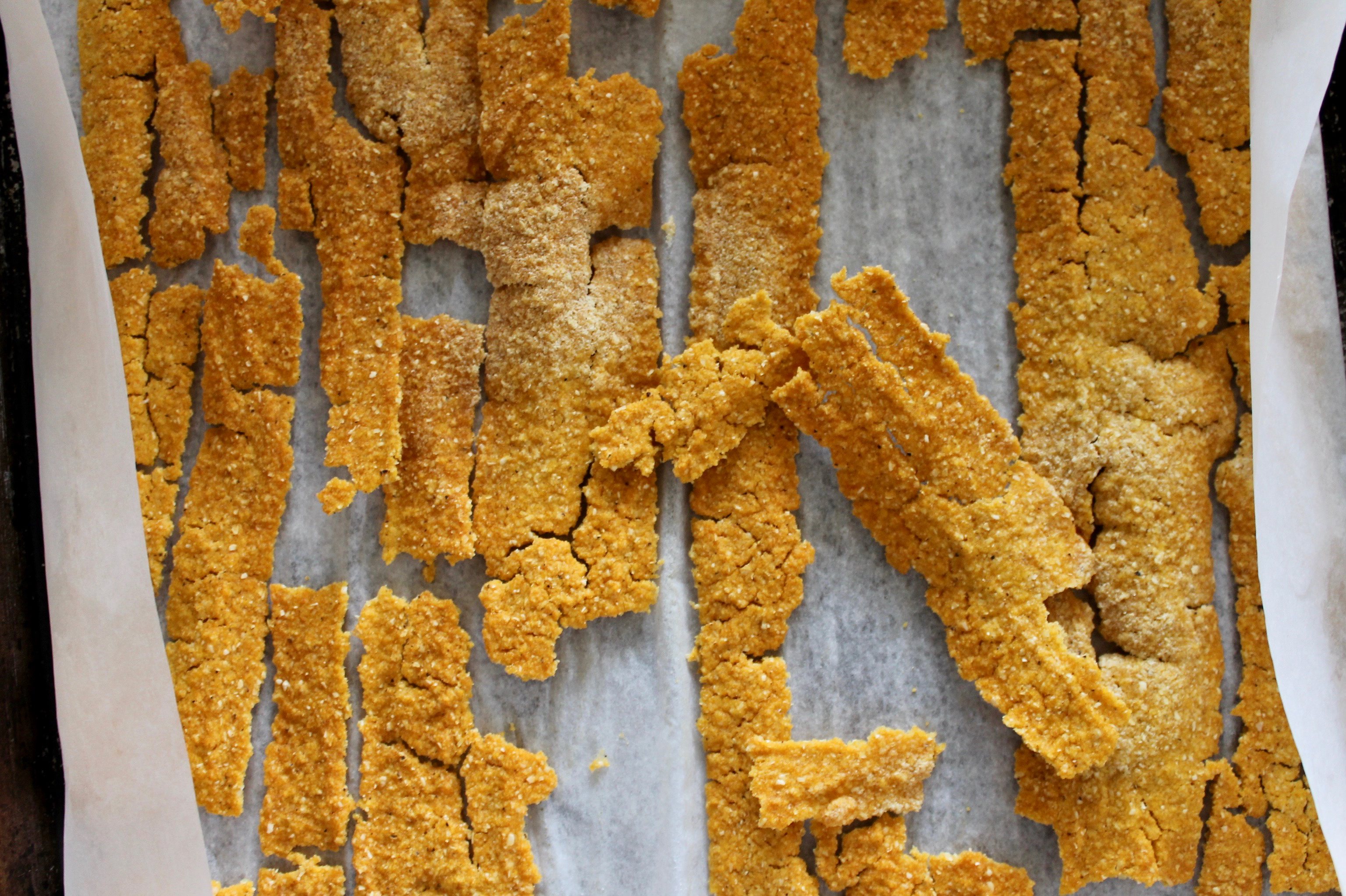 My first batch was too thick, and my homeground cornmeal too coarse, making the cornflakes taste like crunchy sand. 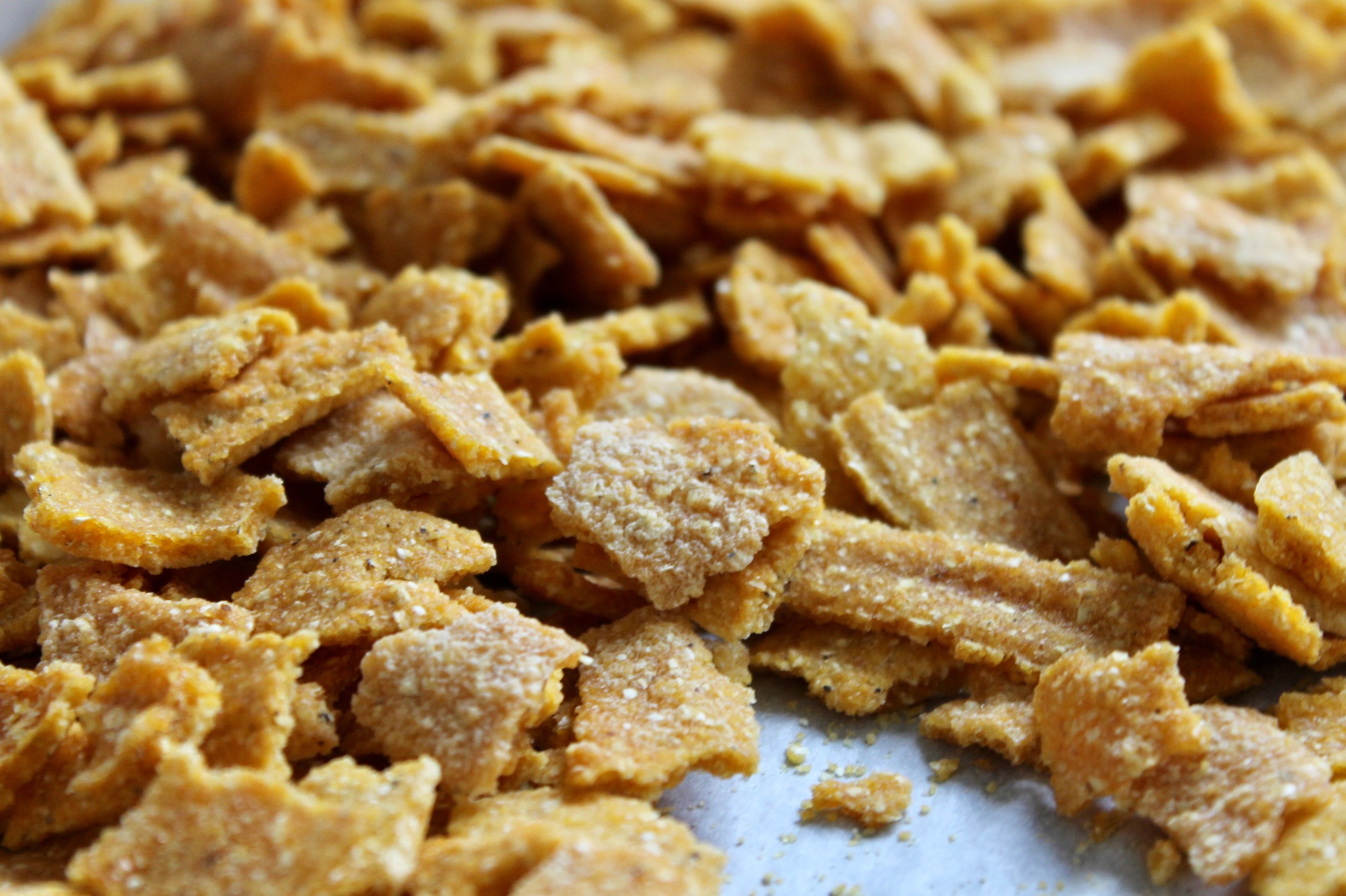 HOWEVER, my tasters made positive (and uncoerced) comments about the level of sweetness and the corn flavor. And the cornflakes are tasty, especially when combined with granola, which is how I eat them. 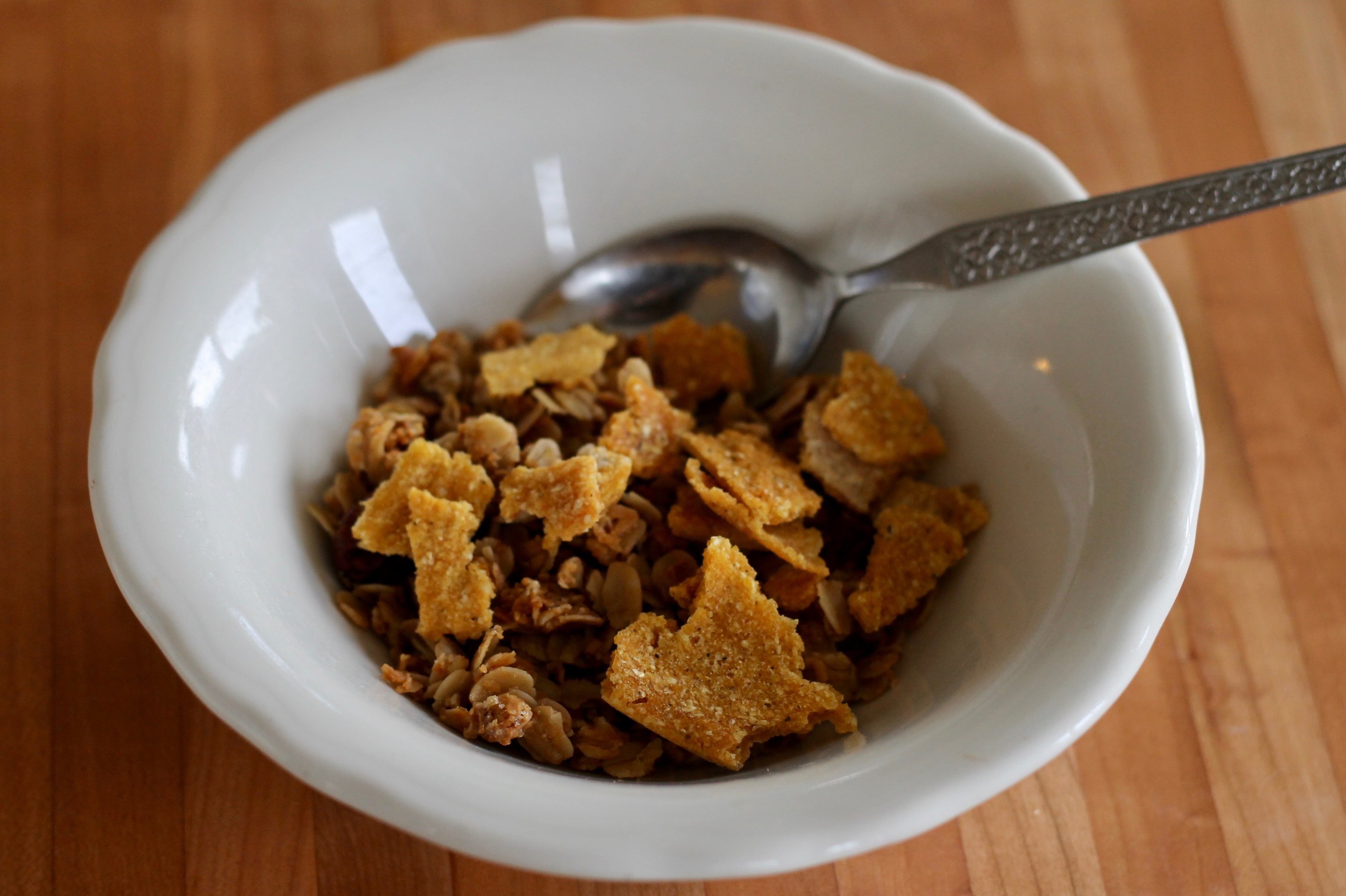 So, I’m planning to try this again, but this time with store-bought (and hopefully more finely ground) cornmeal that I spread more thinly. And maybe I’ll add almond slivers, a few toasted rolled oats, and some honey (Honey Bunches O Oats!) to fancy things up. Stay posted!

Oh, the mess! I almost had to cover my eyes, it’s that bad.

Hanging Lamps
I’m on a quest for two hanging lamps to go above the new kitchen island. The current lamp is not big enough to illuminate the island’s surface; plus, I’m tired of the yellowish hue it gives.

But walking through Home Depot and Lowe’s, I’m appalled at the impracticability and outright dangerousness of many of the options, most of which showcased exposed bulbs. Exposed bulbs! I want my lights to help me see, not sizzle my retinas everytime I glance at them.

I thought my requirements were simple and reasonable — no exposed lightbulbs, a simple, serviceable shade (silver metal preferred), inexpensive — but, it turns out, “Practical” is not in fashion right now.

My mother and father have two lovely lamps hanging over their kitchen sink. 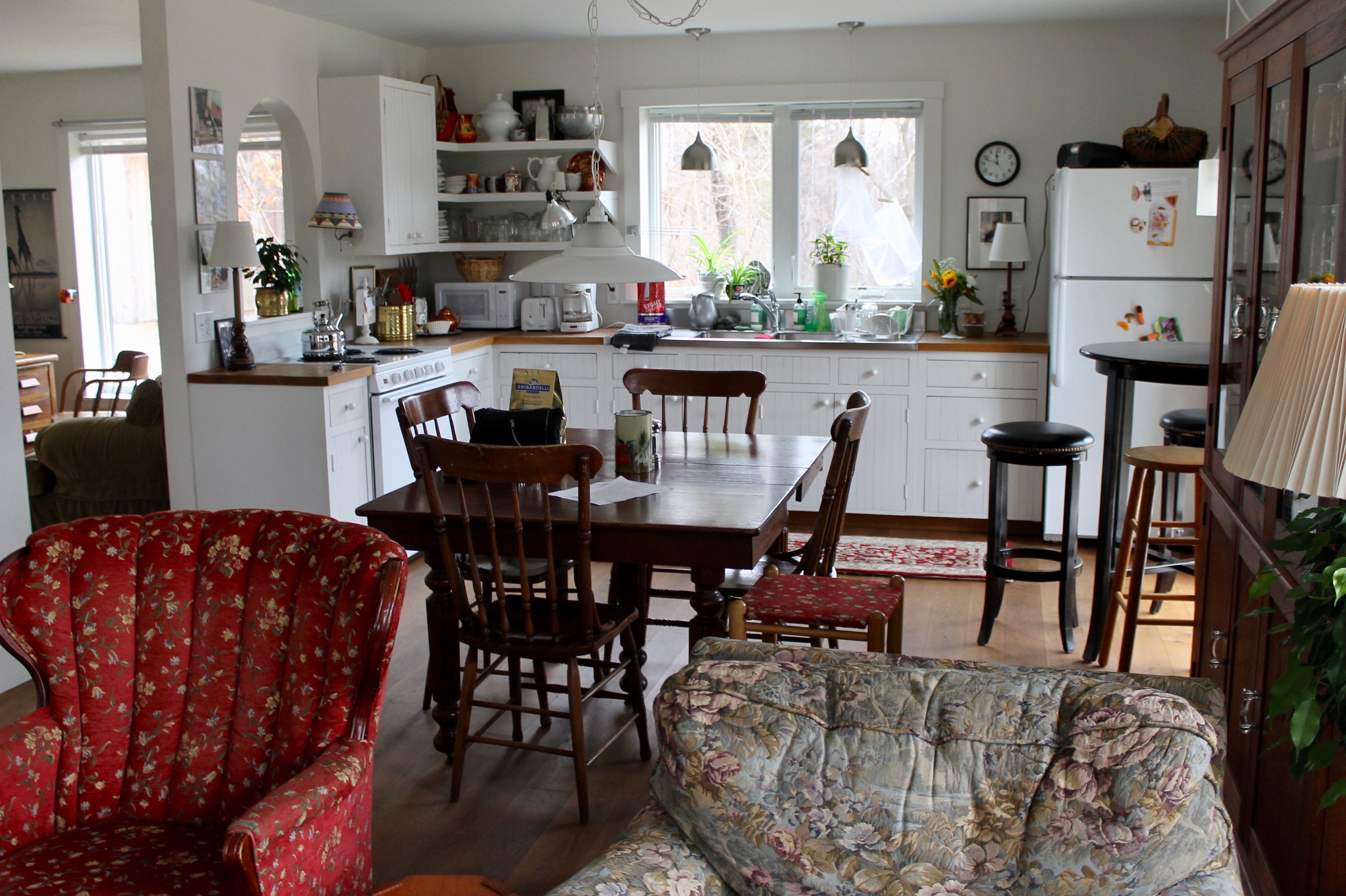 They got them from Lowe’s for something ridiculously cheap, like 15 dollars each, but I can’t find them anywhere. Help?

How To Make A Peanut Butter Sandwich
If you haven’t seen this video yet, you’re in for a treat.

The relationship dynamics crack me up. I see my children in the youtube children, and I totally identify with the dad’s humor.

Movies and Shows
Chernobyl: my husband and I are watching this with our two older kids. Is a horrible story, tastefully told. So far, we’ve watched three of the five episodes. It’s hard to find a time to watch when the two younger kids are occupied, and we have to watch it early in the evening, like at 6 p.m., because it takes a couple hours to unwind before sleeping. After the first episode, we decompressed with youtube videos of racoons eating cotton candy. Highly recommend (both Chernobyl and the racoons).

Schitt’s Creek: I watch this show with my younger daughter. The further we go, the better it gets. Now we’re on Season Four and I’m dreading reaching the end.

Queer Eye: the three younger kids and I have been watching this every now and then. It’s kind and fun (if a bit contrived), perfect for a nice little pick-me-up of positivity, Yaaaaassssss, queen!

Modern Love: I flat-out binged this show, which is so different from the blare and glare of many current shows (I get so tired of being battered over the head with stimulation), each episode a different story, respectfully, simply, gently told. It wasn’t a revelation, but it was a pleasure to watch. Three cheers for authentic, multidimensional characters.

Bohemian Rhapsody: This was our most recent family night movie. My husband and I had watched it months before and thought the kids might like it. They did.

My kids are always angling for Marvel crap, and I’m always stepping in with my type of movie, which makes for much wailing and gnashing of teeth, but then they shut up, watch, and then marvel (ha! like how I did that?) over how good it was.

Other examples of my marvelousness: Real Women Have Curves, Pad Man, On the Basis of Sex, The Biggest Little Farm, The Informant.

Reusable Ziplock Bags
For quite some time, I’ve been needing to get more quart-sized ziplock bags, but I kept stalling — hello climate crisis — making do with glass jars and my stash of assorted plastic containers. Still, every now and then I found myself itching for just a good, old-fashioned quart-sized zip-lock. They’re so easy.

And then I read about reusable ziplock bags. At first I snorted. People are selling bags, advertizing them as something you can reuse? Why, I’ve been reusing my plastic bags for years! But then I dug a little deeper and realized that these bags are made out of durable material and meant to last years. After much research (they’re expensive), I bought four — two quart and two gallon — just to experiment. 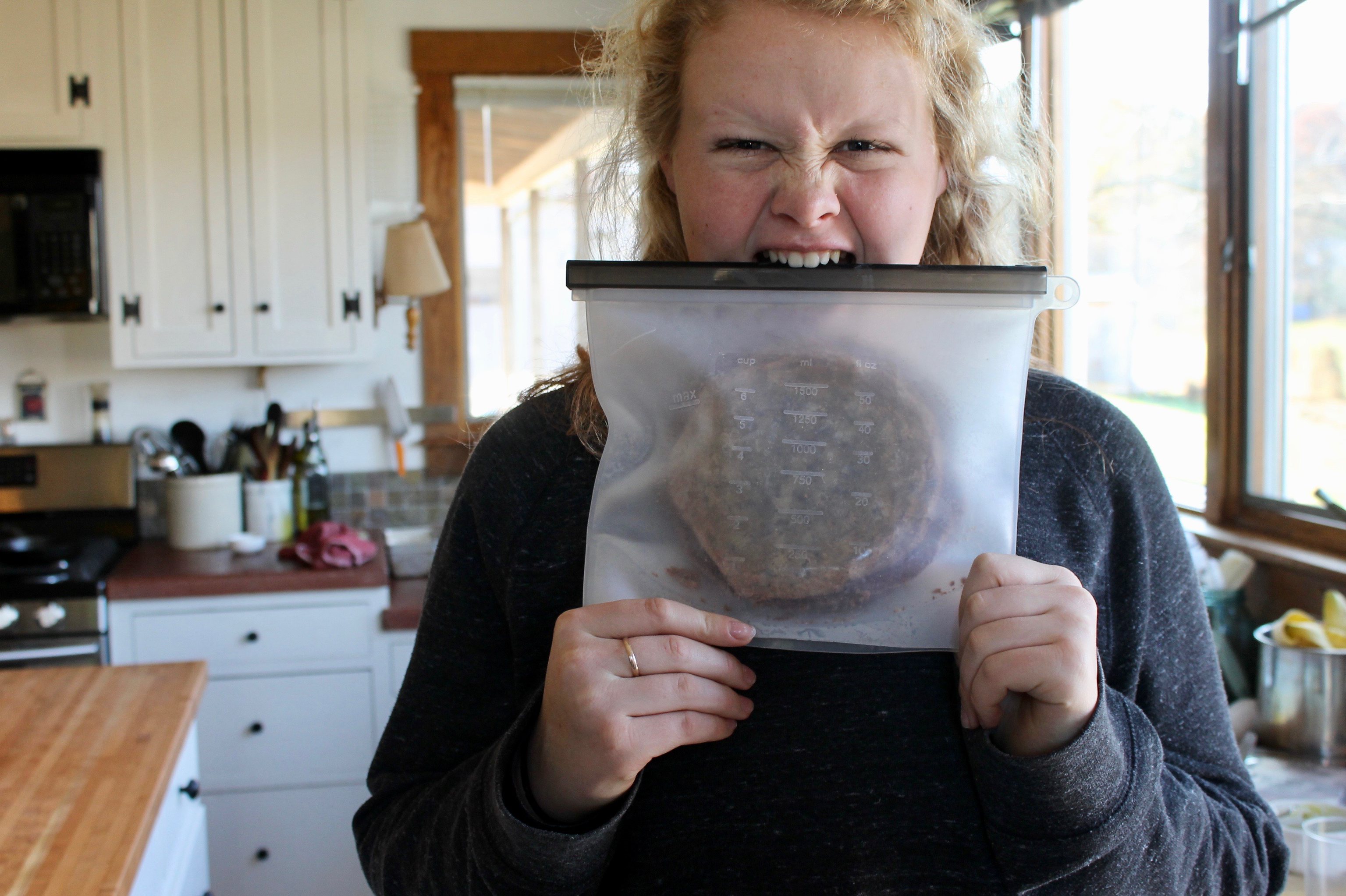 Supposedly, these bags can withstand boiling, microwaving, and freezing, and they can hold liquid, though I’ve only used mine for cookies and fruit and such. 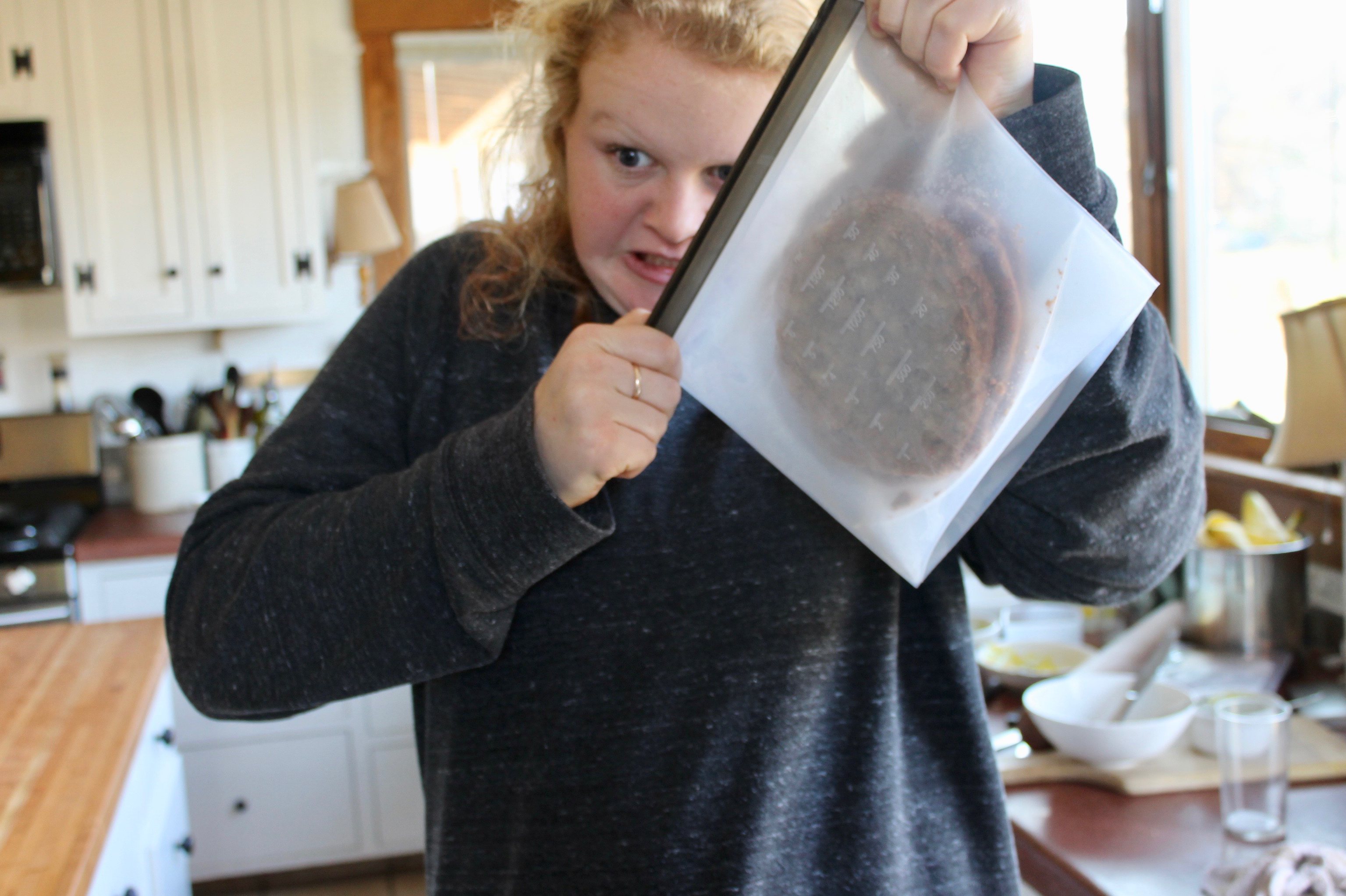 At first they were a little tricky to open… 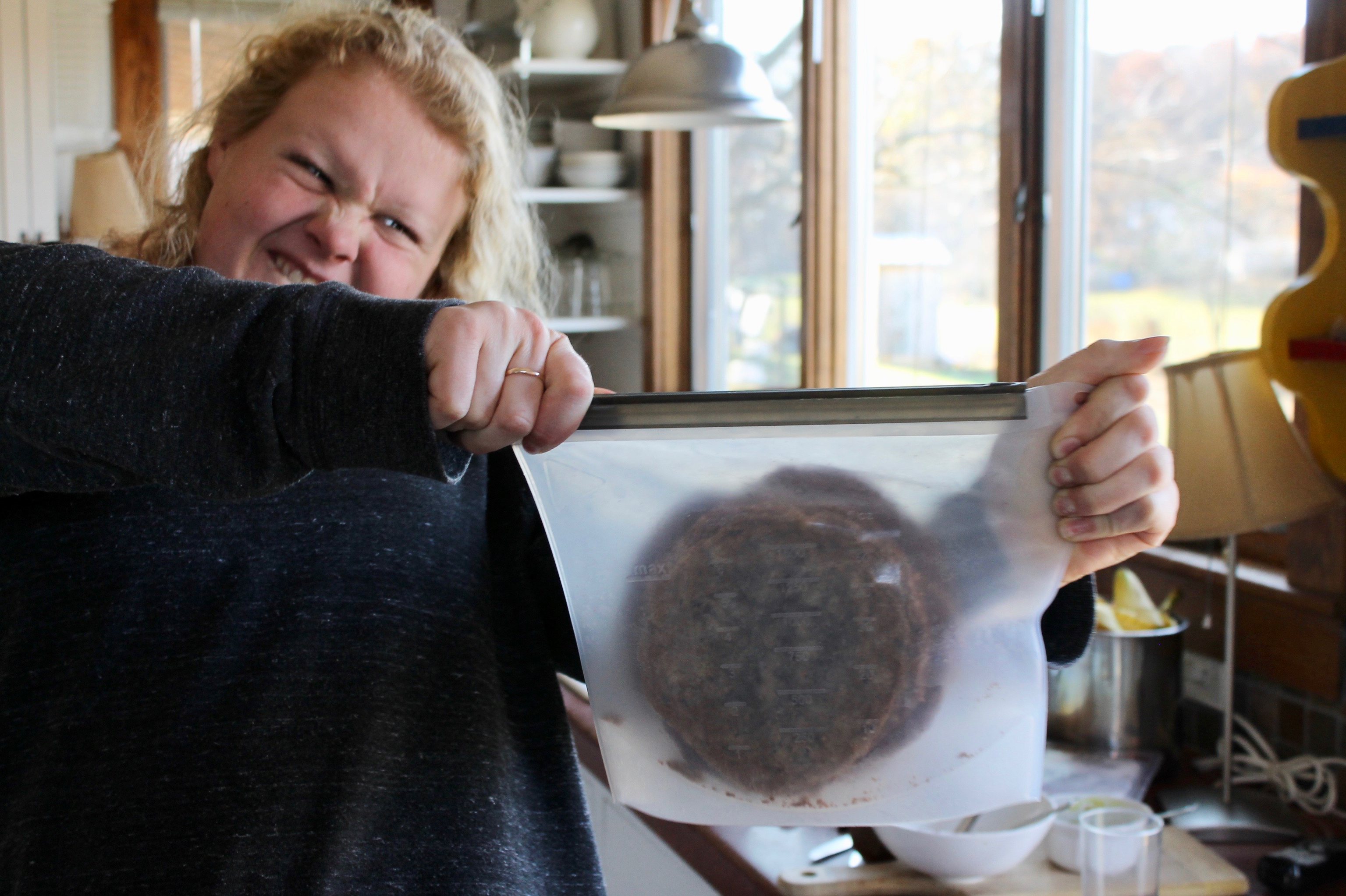 But then we got the hang of it. 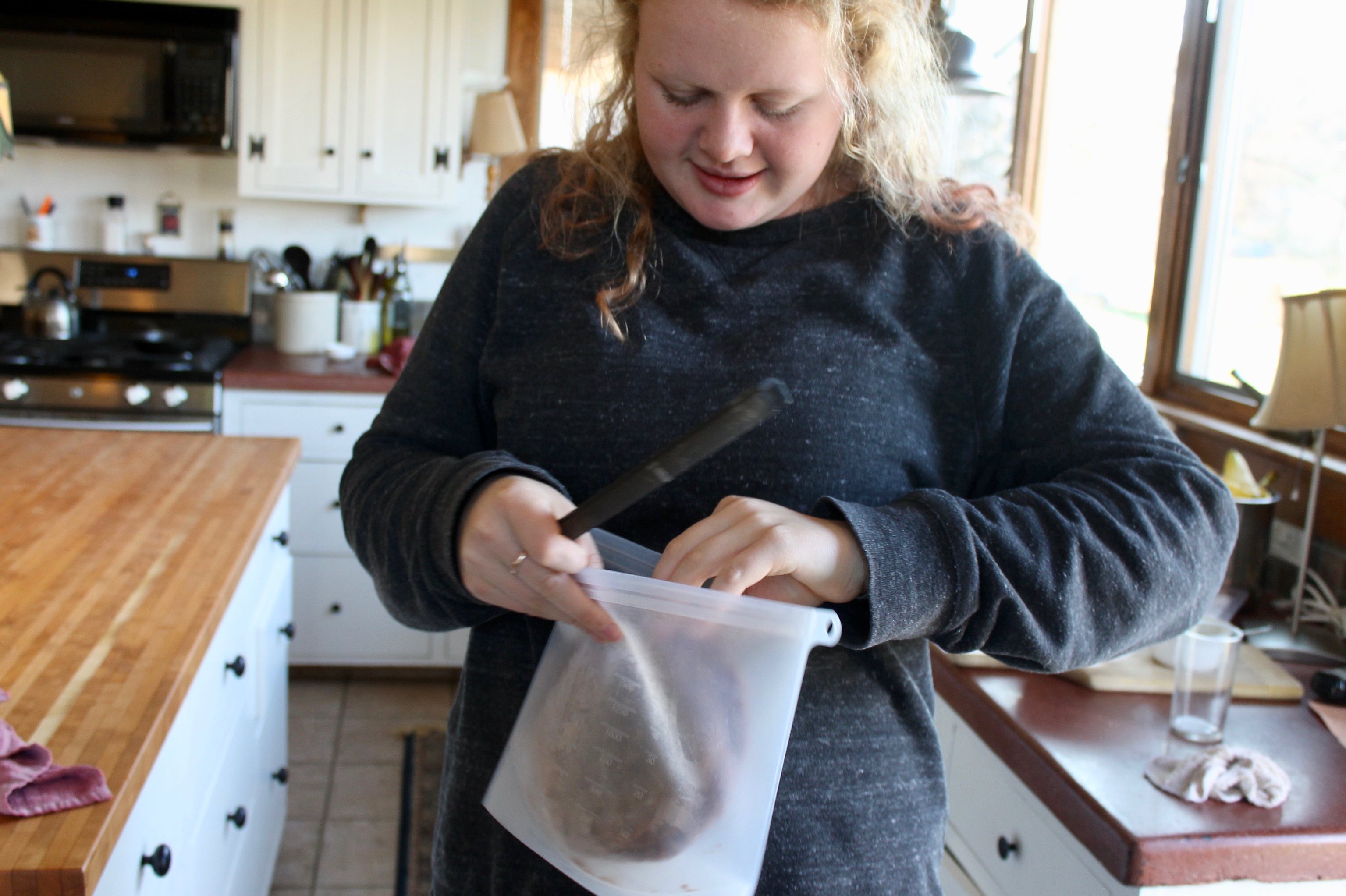 Last week we had sliced apples for our charcuterie and someone put all the leftovers in one of the reusable bags. It sat in our fridge for days, and on day six — SIX! — I finally opened the bag, fully expecting to toss the apples, but guess what! They were as fresh and crisp as they were six days before. They hadn’t even browned! 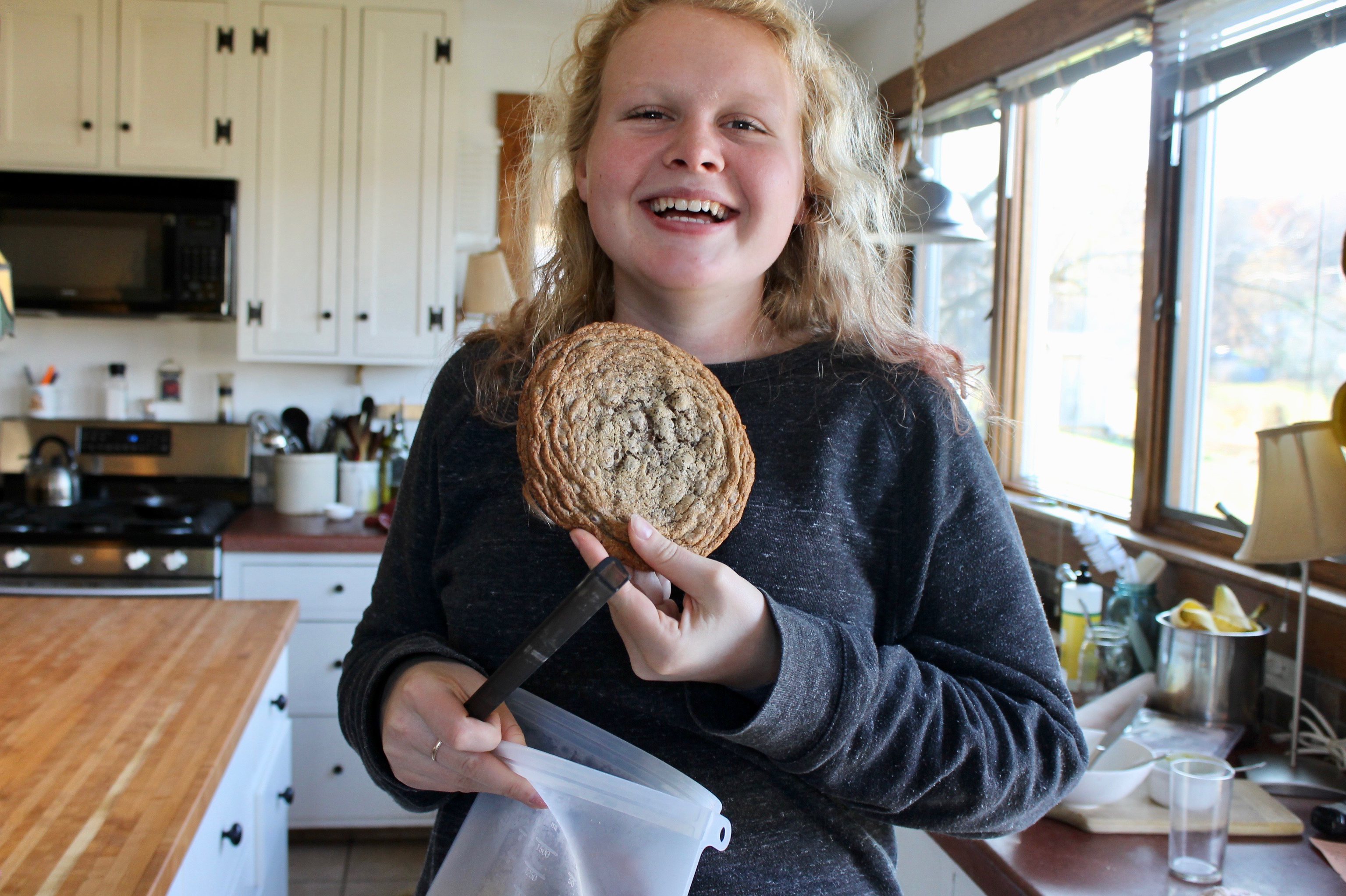 My older son doesn’t like the bags’ texture — he says the silicone make it feel like his skin is coming off the bone when he sticks his hand in the bag — but I don’t mind it at all. In fact, I like the sturdy feel.

Climate Crisis Poll
When our family was visiting over Thanksgiving, I was stunned to learn that their churches are completely silent on the matter of the climate crisis. Since our church talks about it a lot — currently there is a joint adult and youth quarter-long Sunday school class dedicated to the subject — I assumed that all churches do the same, silly me. 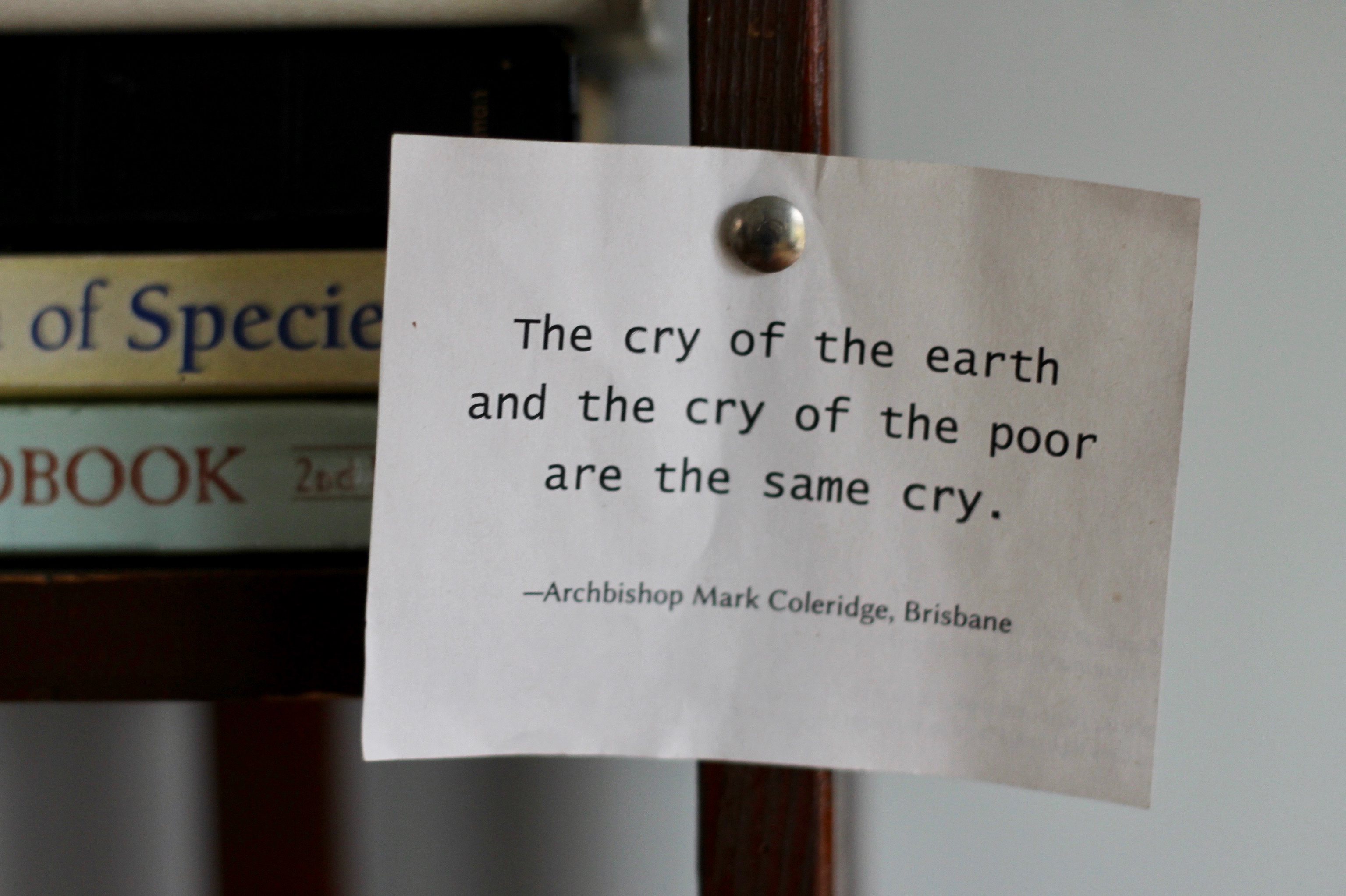 the quote that hangs above my father’s desk

So now I’m curious: what is your church (or local community) saying or doing about the climate crisis?