This was the fourth year that our family has been in charge of the doughnuts for the Virginia Mennonite Relief Sale. Every year the process has gone a little smoother, but something still manages to always go wrong… 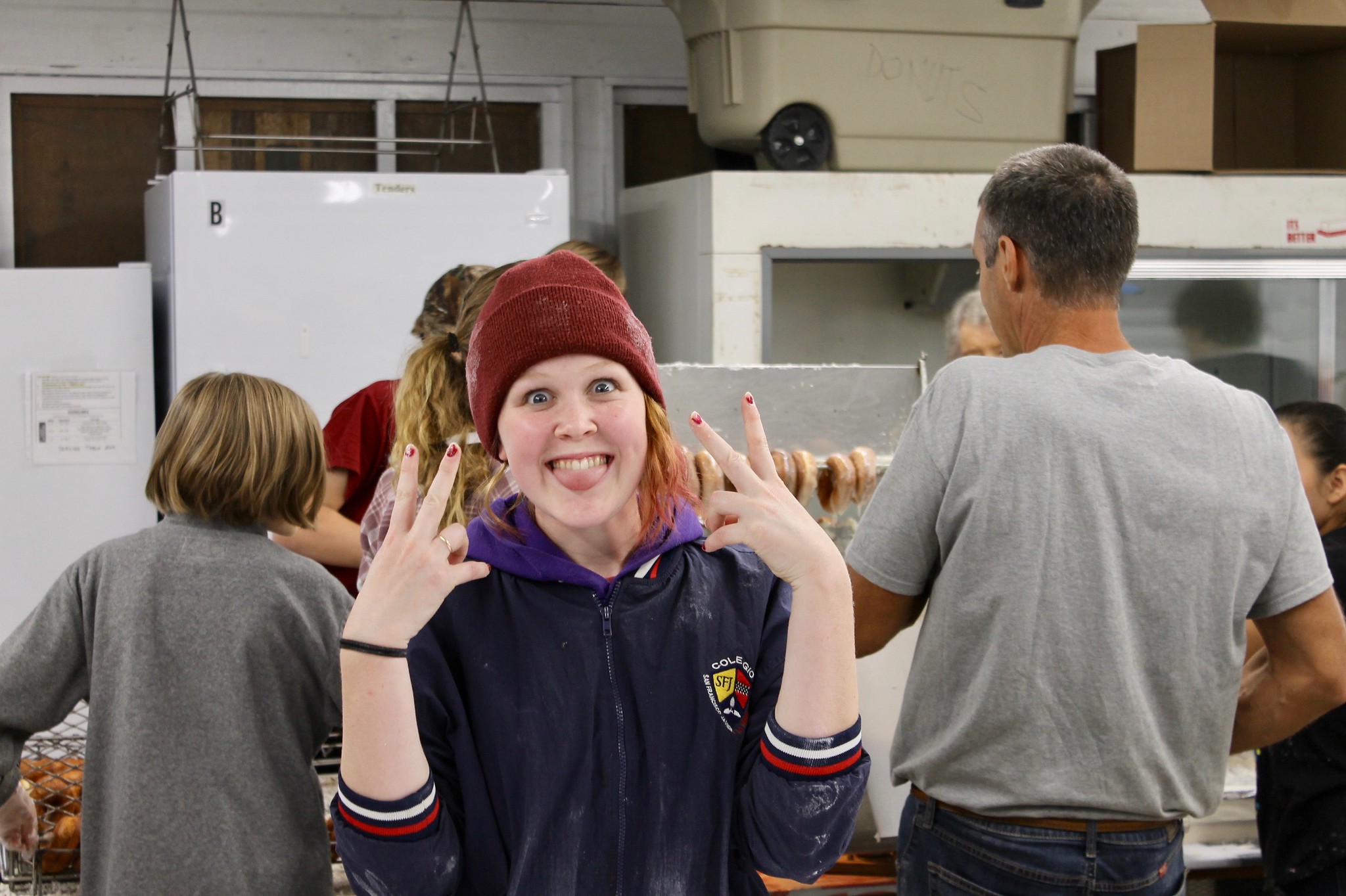 Problem #1
Two days before the sale, when we went out to the fairgrounds to prep the chicken shack, we couldn’t get into the building because the fairground managers hadn’t arrived yet. 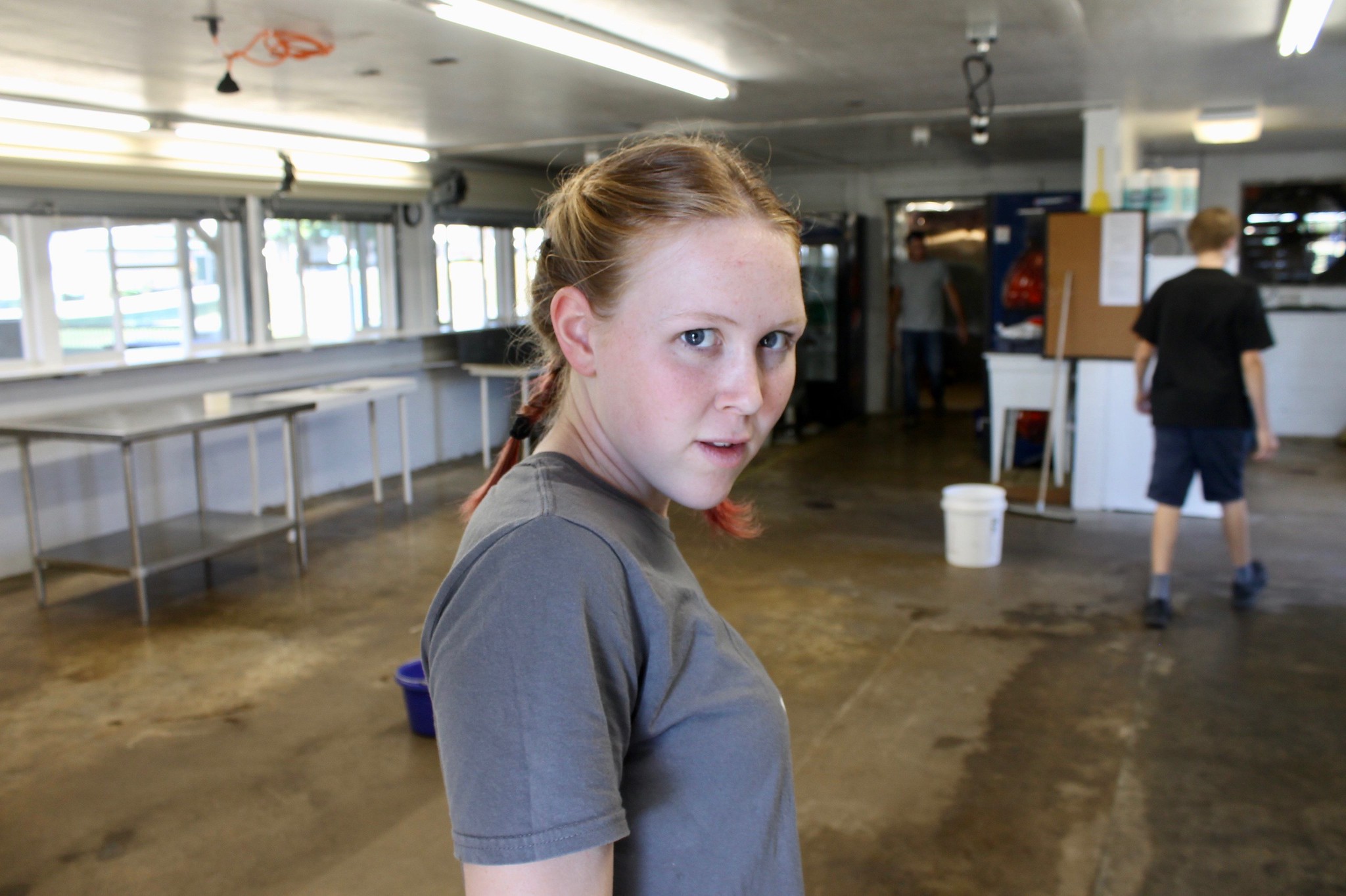 When we did finally get the door unlocked, we discovered that the chicken shack owners had gotten new tables, which were really nice, but for our purposes were completely useless. This meant that Dad had to make two new dough-rolling tables on top of everything else he already had on his plate.

Problem #2
A few days earlier when we were taking everything out of attic storage, we weren’t able to find the cloths for the dough trays. The people who’d been in charge before us handmade them specifically for these trays, so the fact that they were missing was a real crisis. Mom decided that we would just wrap the trays in parchment paper, but then on Thursday she discovered that tape doesn’t stick to parchment paper. 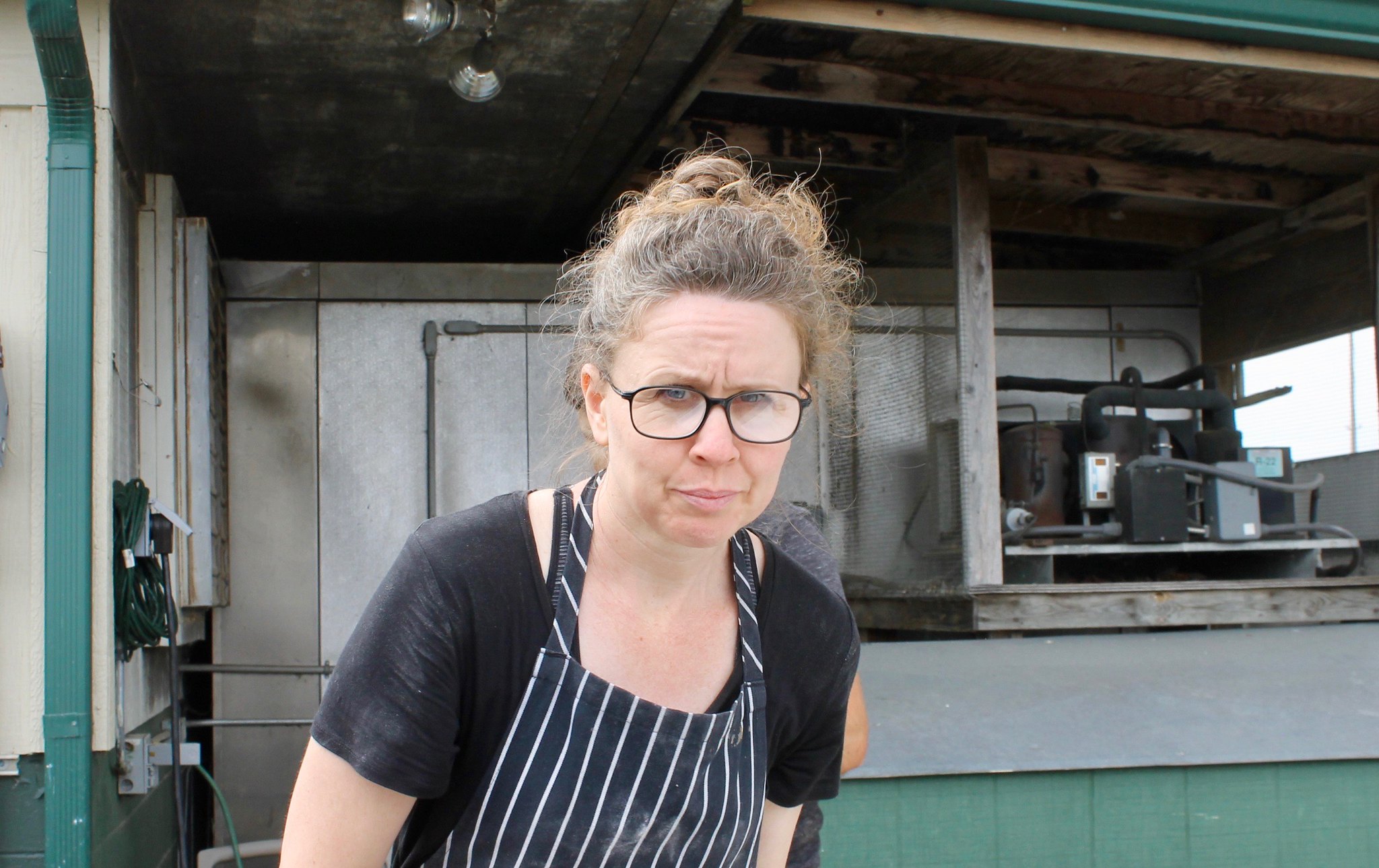 Now we had to make the cloths ourselves, and at the very last minute, too. On our way home, we stopped by Ragtime Fabrics and bought some clearance cloth — the owners let us have it for just a dollar a yard!

(Almost) Problem #3
Friday morning, we stopped by the church to pick up the mashed potatoes that the senior group had made for us the previous day. We needed 40 bags of potatoes, but after taking them out of the fridge I only counted 34 bags. Mom started panicking, so Nicholas ran back inside to check again. He found 10 more bags of potatoes in the other fridge, thank goodness! 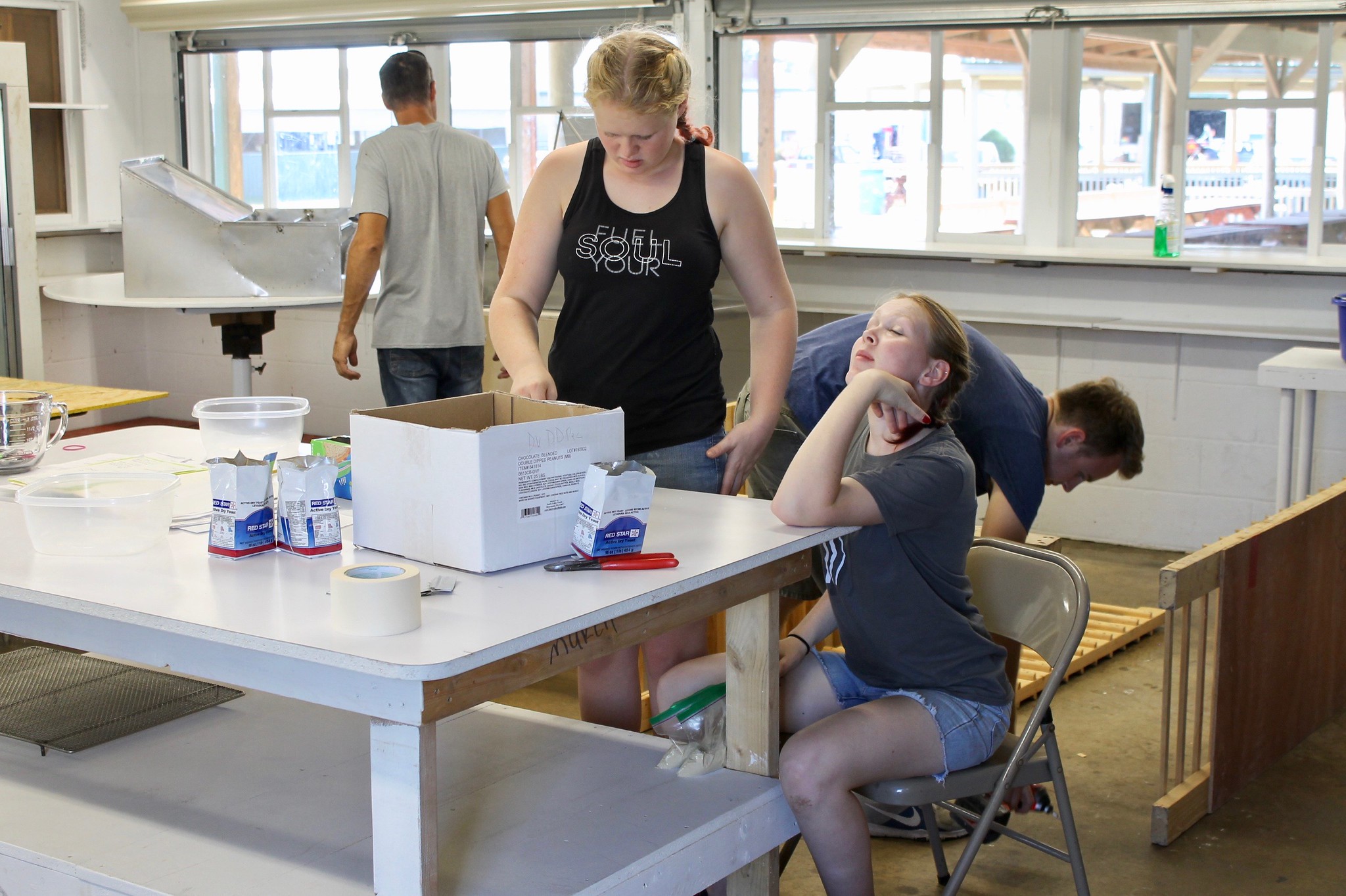 Problem #4
Our main job on Friday was to make the glaze, but when the electrician came to set up the mixer, he decided to rewire the whole system which took hours, instead of minutes, so now we were really behind schedule. By the time he finished, Dad was pulling his hair out.

Problem (and solution) #5
On our way home, we borrowed scissors from a bunch of people, Grandmommy came over, and we had an emergency cloth-cutting session. 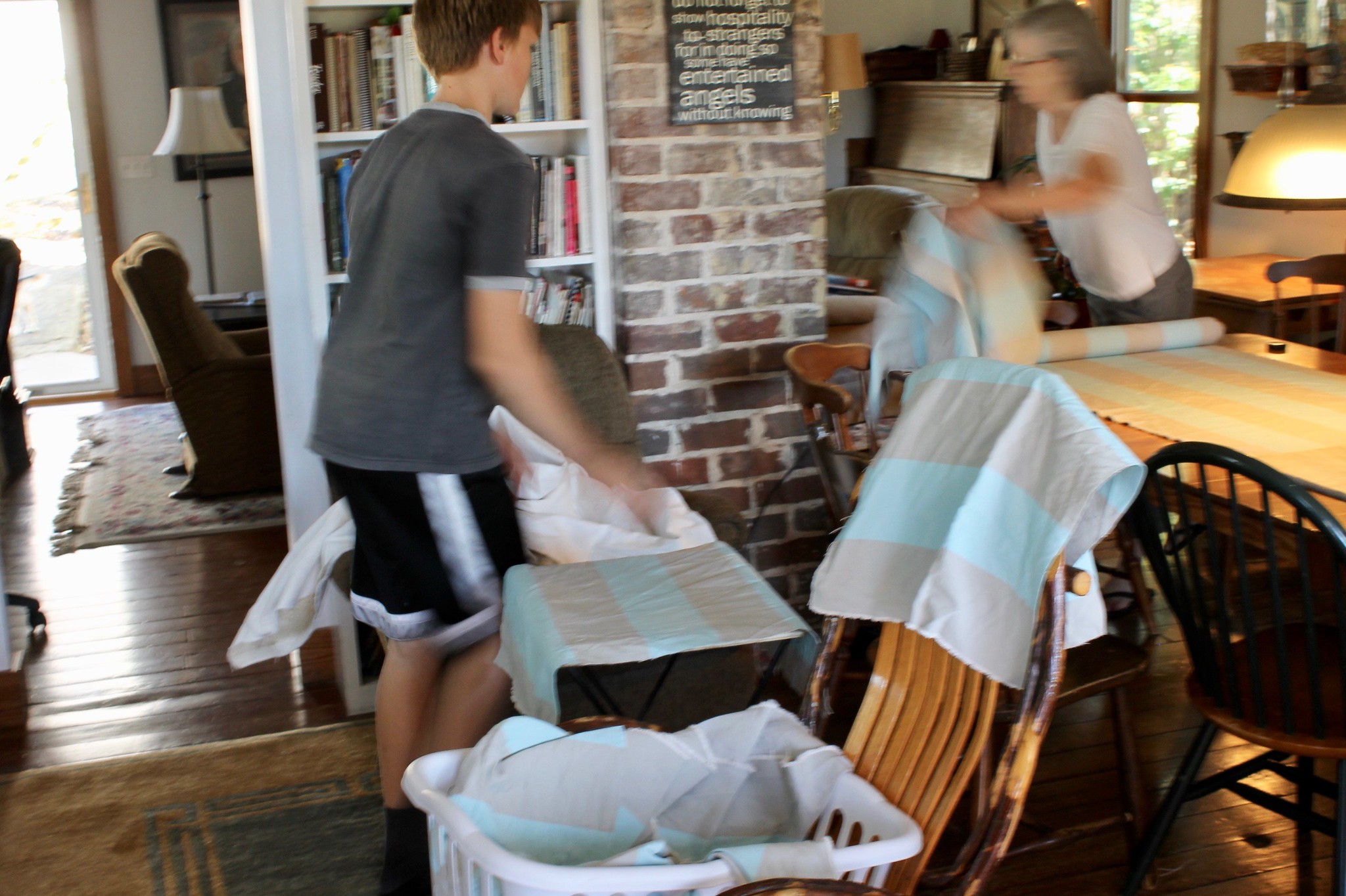 Then Grandmommy raced the cloths to a friend’s house so she could serge them for us (thank you, Rosemary!).

Problems #6 and #7
Mom, Dad, Jonathan, and I went to bed right after supper so we could get back up at 11:30 p.m. We arrived at the fairgrounds at 12:30 a.m. Jonathan and our cousin Kenton, who had driven all the way from Lancaster PA that evening, stopped by Rosemary’s house for the cloth. 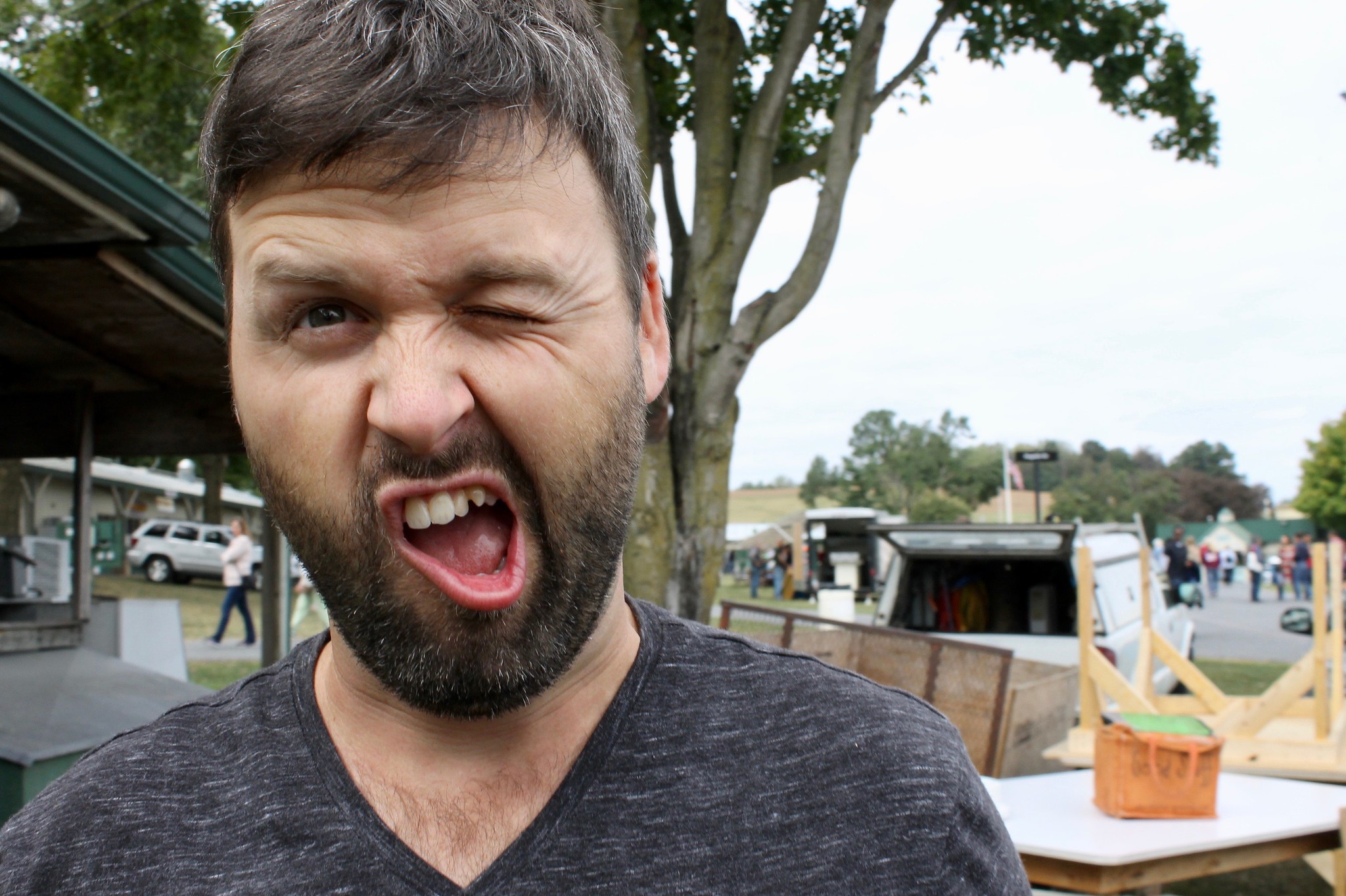 When we got there, we discovered that the heater in the proofing room wasn’t working. Also, the Crisco that Caroline had used to grease the proofing buckets was rancid, so the buckets had to be washed out and regreased with butter. 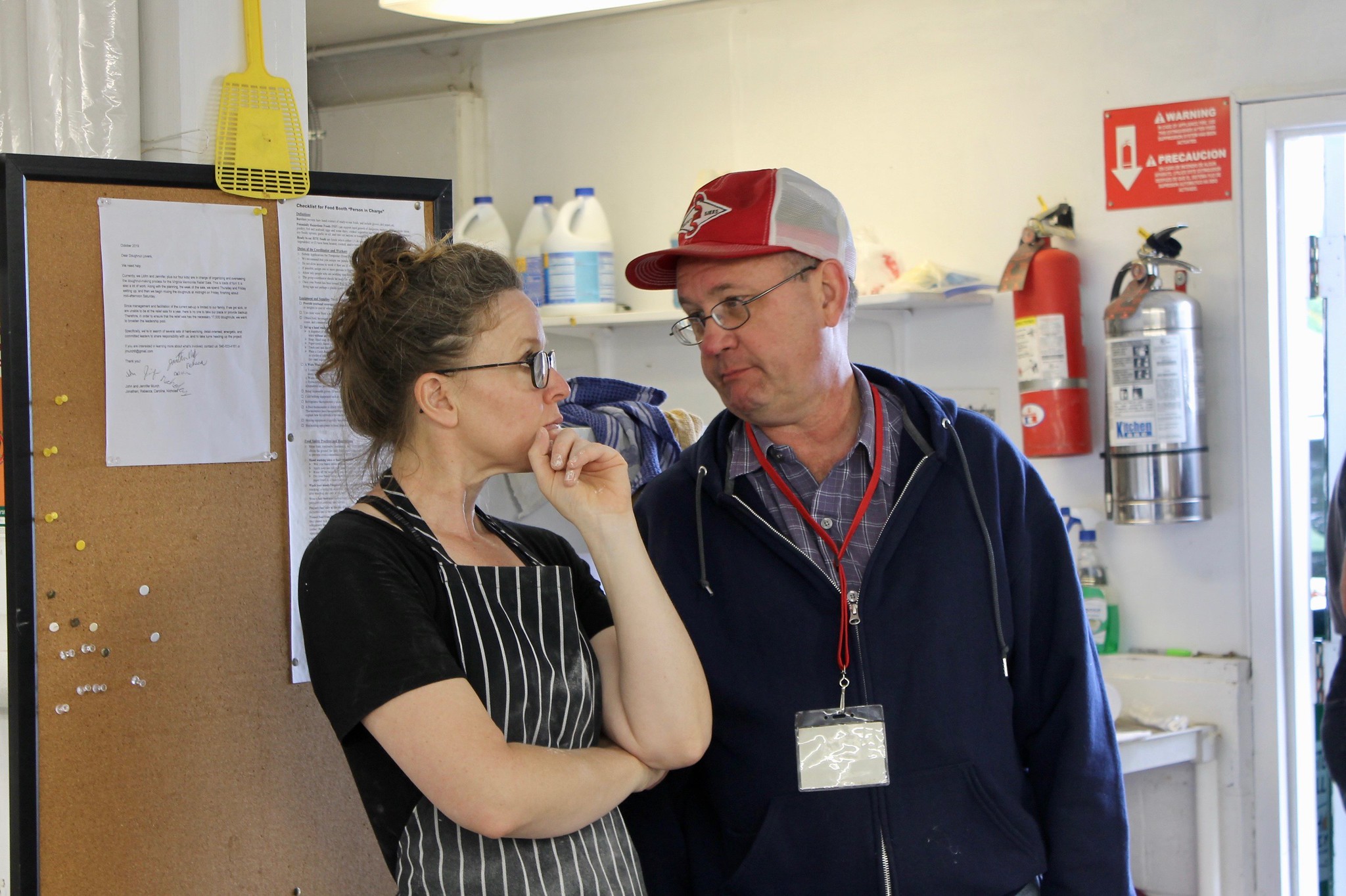 (Dad says that we have to keep doing this until we have a perfect year. I say, That’s never going to happen!)

I spent most of the night and the early morning heating the butter and milk and then blending them with the mashed potatoes. 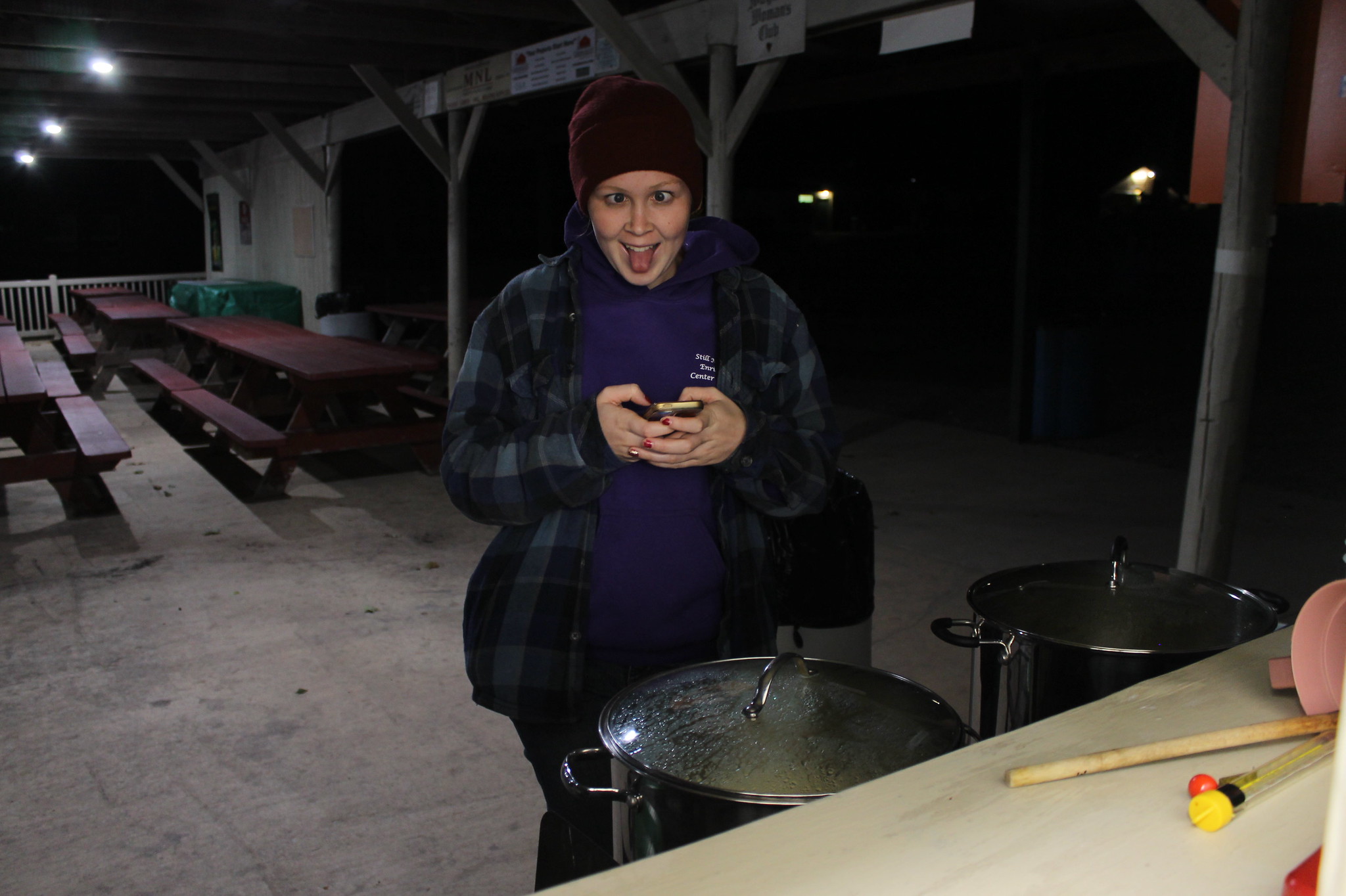 I also helped mix the dough which was messy, fun, and a little scary. I kept second guessing myself: Did I put in all of the flour? I cracked eight eggs, right? Is the dough mixed well enough? Don’t put your hand so close to the running mixer, Rebecca! 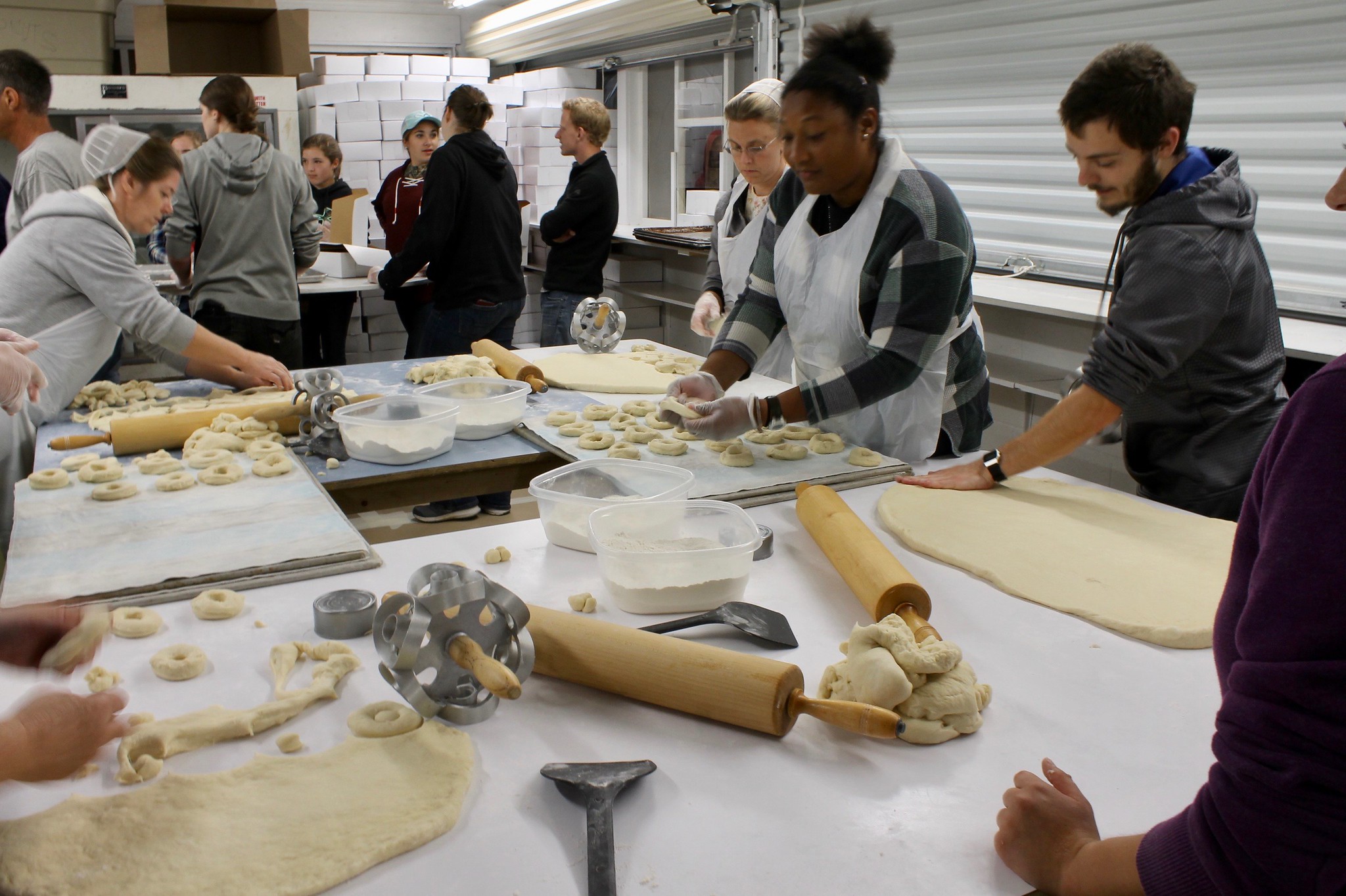 At the very end, I helped cut the doughnuts: Jonathan hurled the doughnuts at me and I put them on the tray. I don’t know if I’ve ever moved so fast while working with food before! I felt awake, and, for the first time in nine hours, I was not freezing cold. 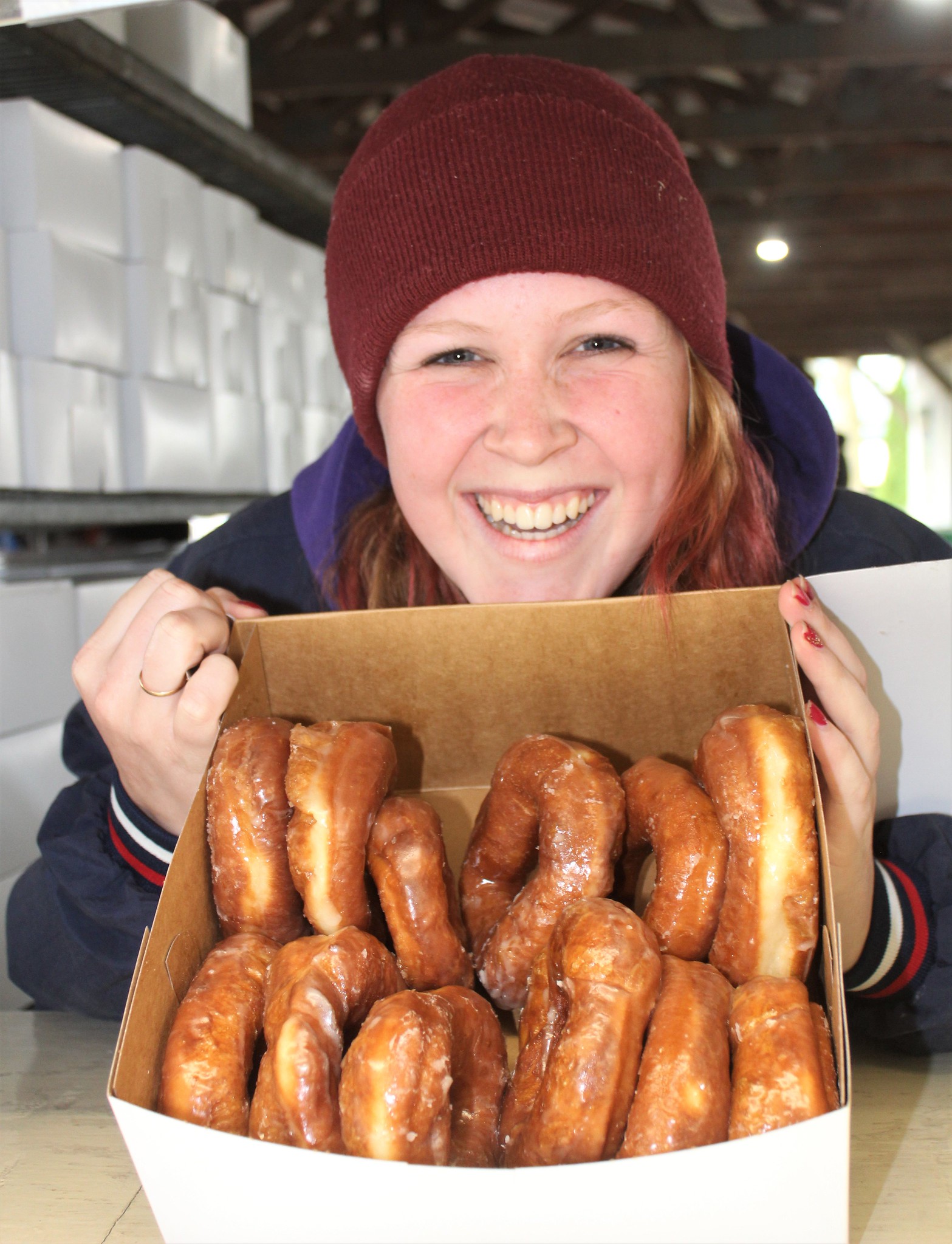 Unfortunately, we weren’t able to make the last two batches of doughnuts because, since we were short on volunteers for each of the shifts (MAJOR Problem #8), we’d fallen behind schedule. By the time we finished, the line for the doughnuts was still long so Mom had Jonathan and me take the scrap doughnuts out to the people waiting in the back of the line. 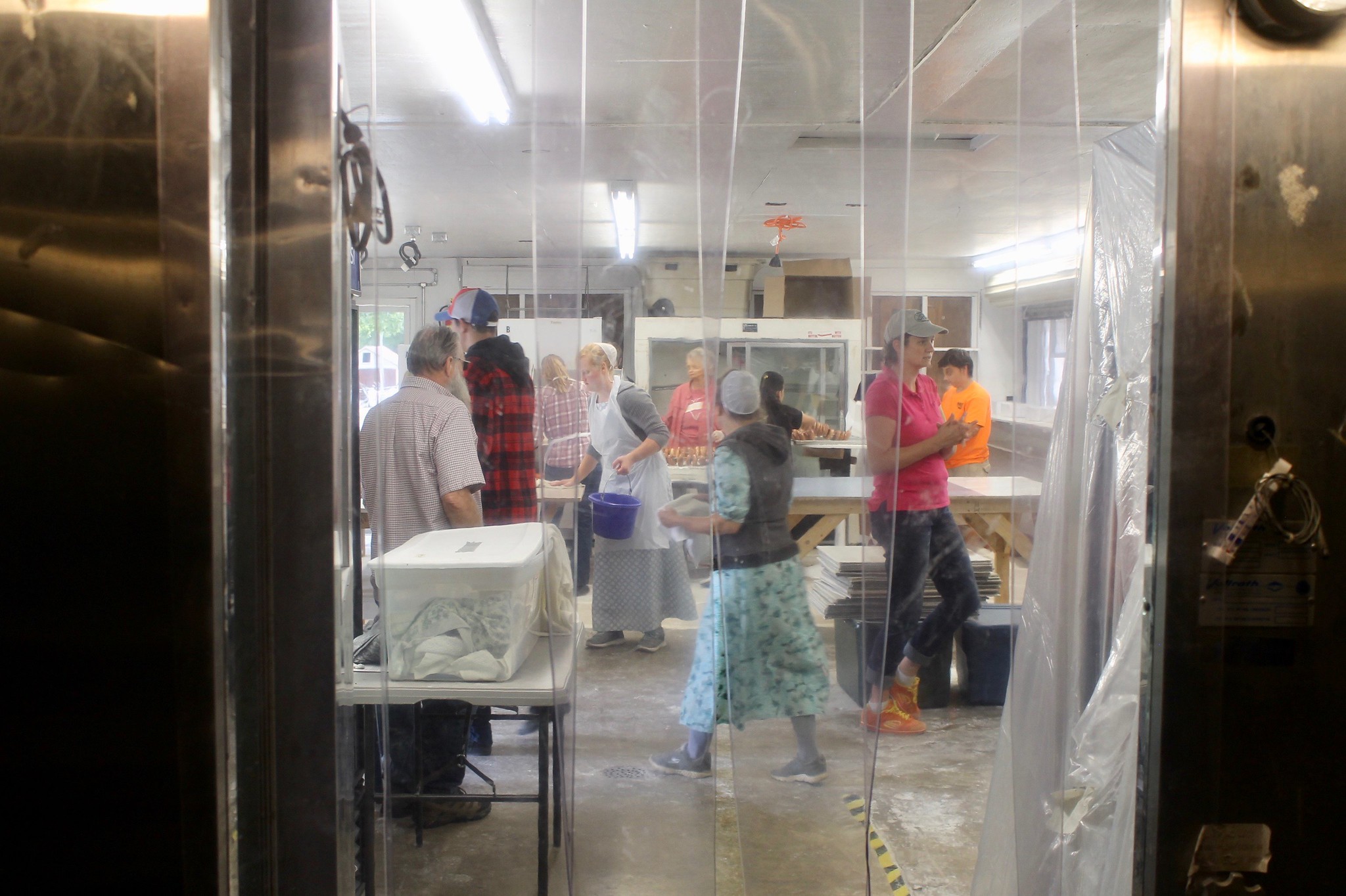 We finished cleaning up around 2:30 that afternoon (our grandparents and a handful of other volunteers helped out a lot, which made things go quickly), and on the drive home, Caroline and I had to keep Mom awake. 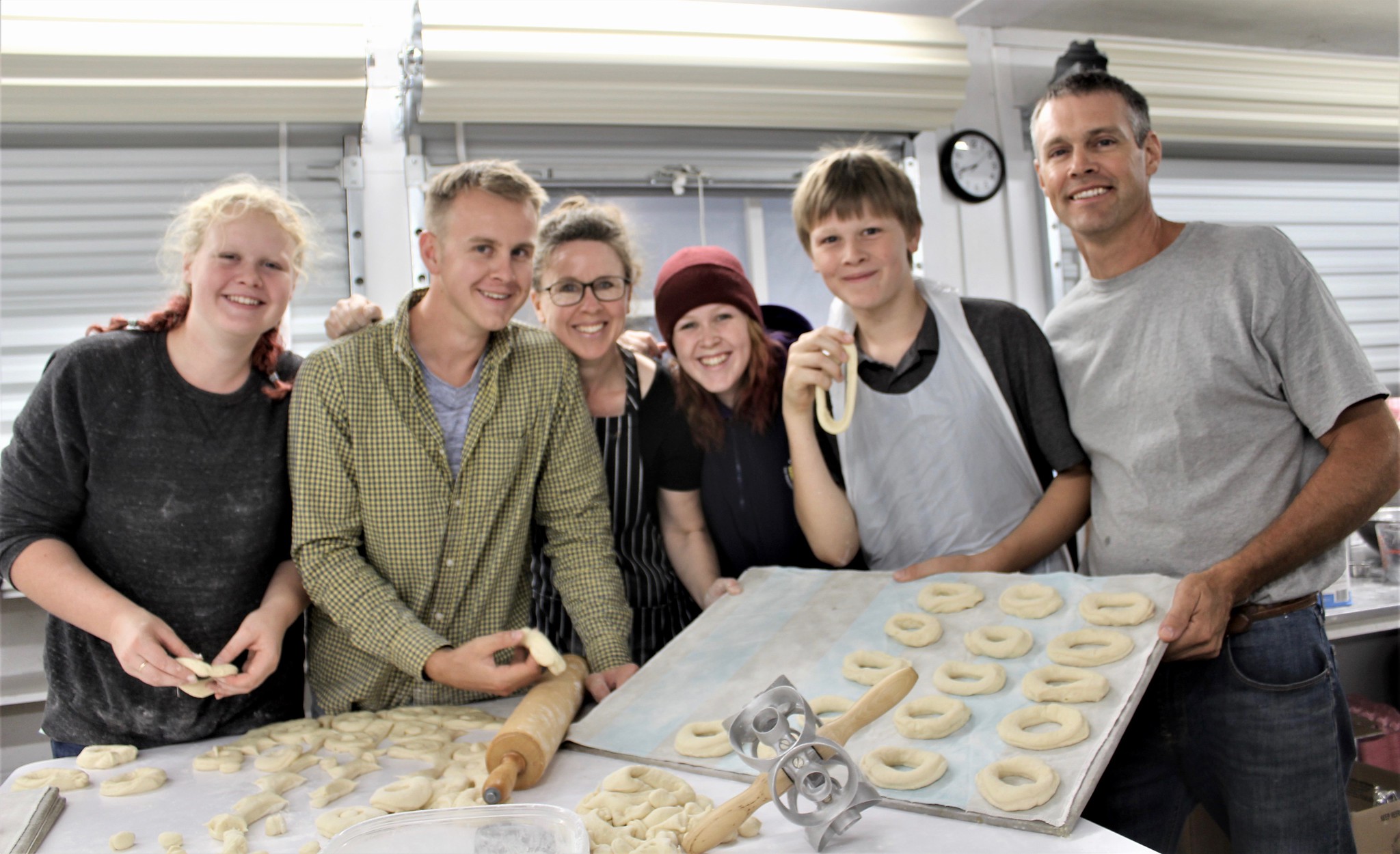 The whole thing was exhausting, but I’m already excited for next year!