One of my friends does a weekly blog post documenting her previous week’s grocery purchases and meals. It’s pretty straightforward — a bunch of photos with a bit of writing — and some might call it boring, but not me. To me, it’s the blog equivalent of eating a big bowl of homemade mac and cheese, comfy, simple, and utterly satisfying. Like pawing through someone’s pantry, a look-see at the dinner plate gives me a peek at the inner workings of another’s home: their resources, limitations, and preferences, their creativity (or lack thereof), their foibles and shortcomings, passions and desires.

So then I thought, if I like it so much, why don’t I do a what-we-ate food post? I often post food shots, but they’re random — sticks of butter or illuminated honey or stomped on loaves of underbaked bread. A running tally of what we eat, day in and day out, would be different. Maybe boring, and perhaps a wee bit embarrassing — Yet another bowl of cereal, Jennifer? Or, Where are the green vegetables, you bad mother you! — but it might be fun, too.

So I decided to give it a go. Just for one week, just for kicks.

Turns out, there were problems.

Second, with so many of our meals being leftover-based, and with each person eating something different, honest documentation would mean a million photos, ugh.

Third, most of our family meals happen after dark, and photography after dark is a no-go.

Fourth, a lot of my meals are a series of sneaked snacks — a peanut butter apple or a handful of dry cereal or 15 Twizzlers or a margarita and too many tortilla chips — so the last thing I’d want to do is actually document the food I’m not supposed to be eating, right?

Still, I tried. Over the course of two (three?) weeks, I got enough photos to make a post. It’s hardly a fair representation of our eating habits, but it’s something (and maybe one of these weeks I’ll try again). 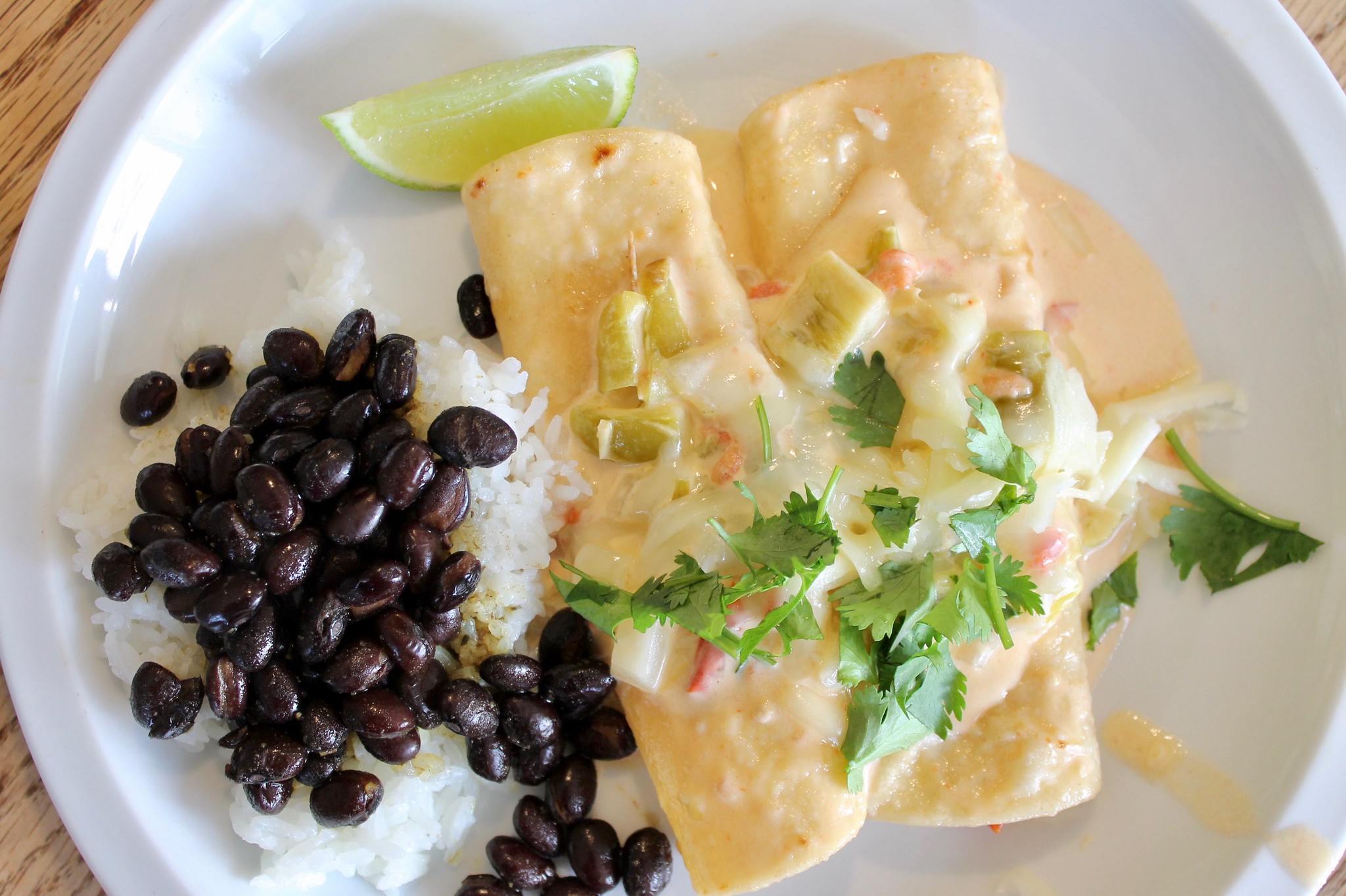 Soft cheese tacos with Anaheim peppers (I found them!), rice, a couple cans of black beans into which I’d stirred a scoop of Chiro’s magic pincho seasoning (we had leftover sauce squirreled away in the fridge from their latest visit). 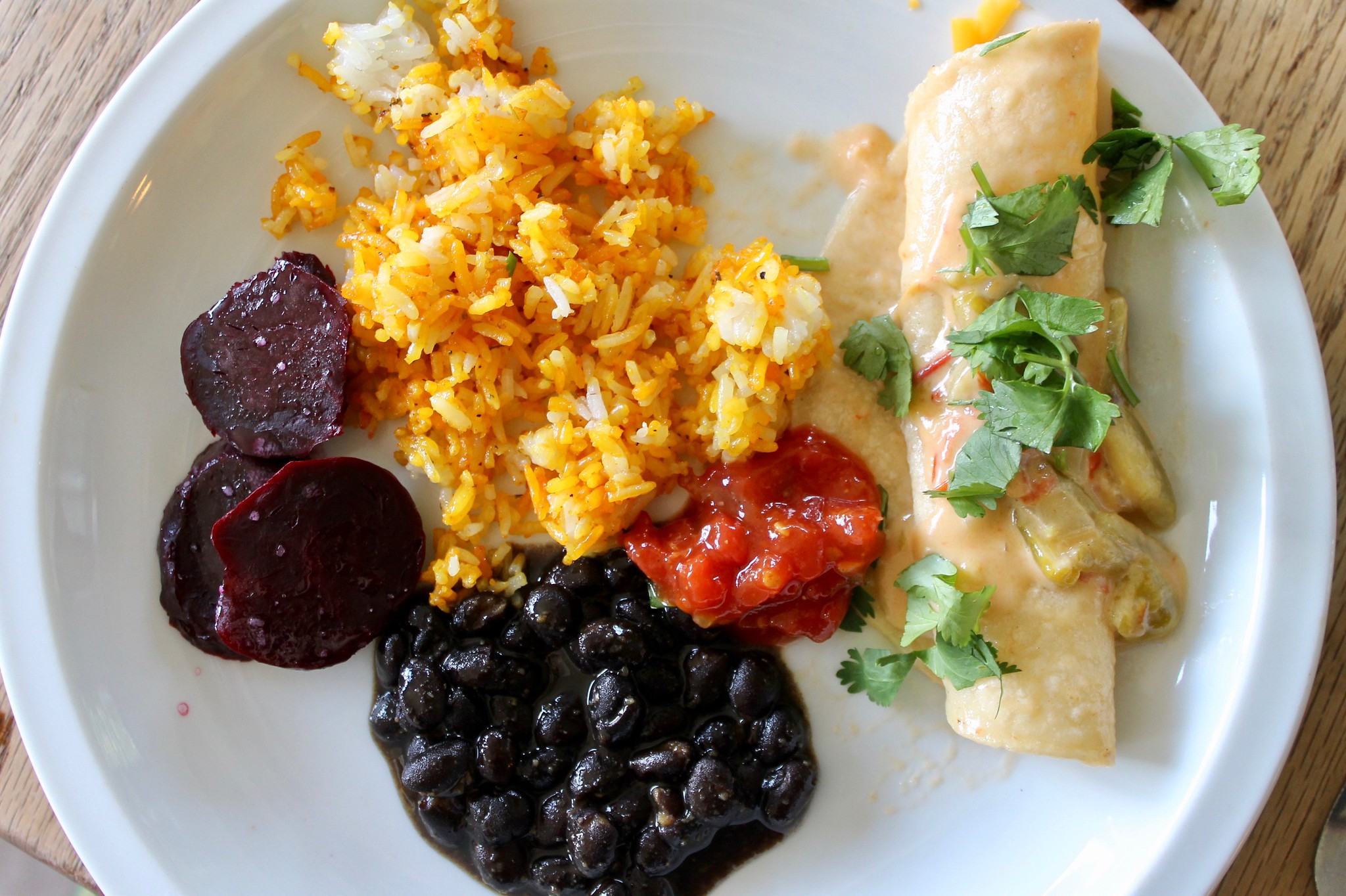 The next day, leftover soft cheese tacos, leftover rice that I fried up with oil and a scoop of pincho sauce, the beans, buttered and roasted beets from the garden carefully and evenly divided out among the six of us so we all get some like it or not, and salsa. 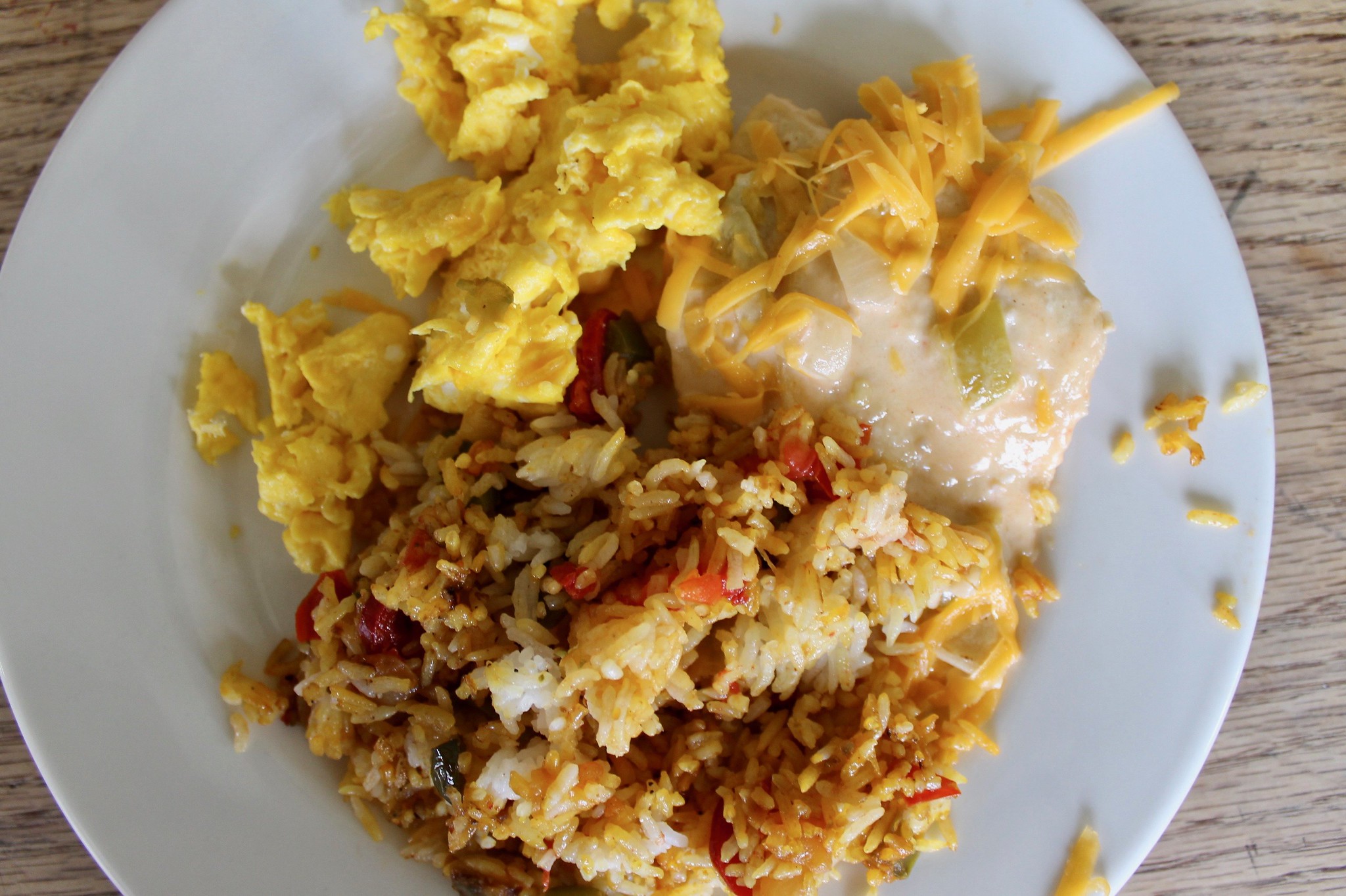 And the next day, the last of the soft cheese tacos, more pincho fried rice (the kids love it), and scrambled eggs. 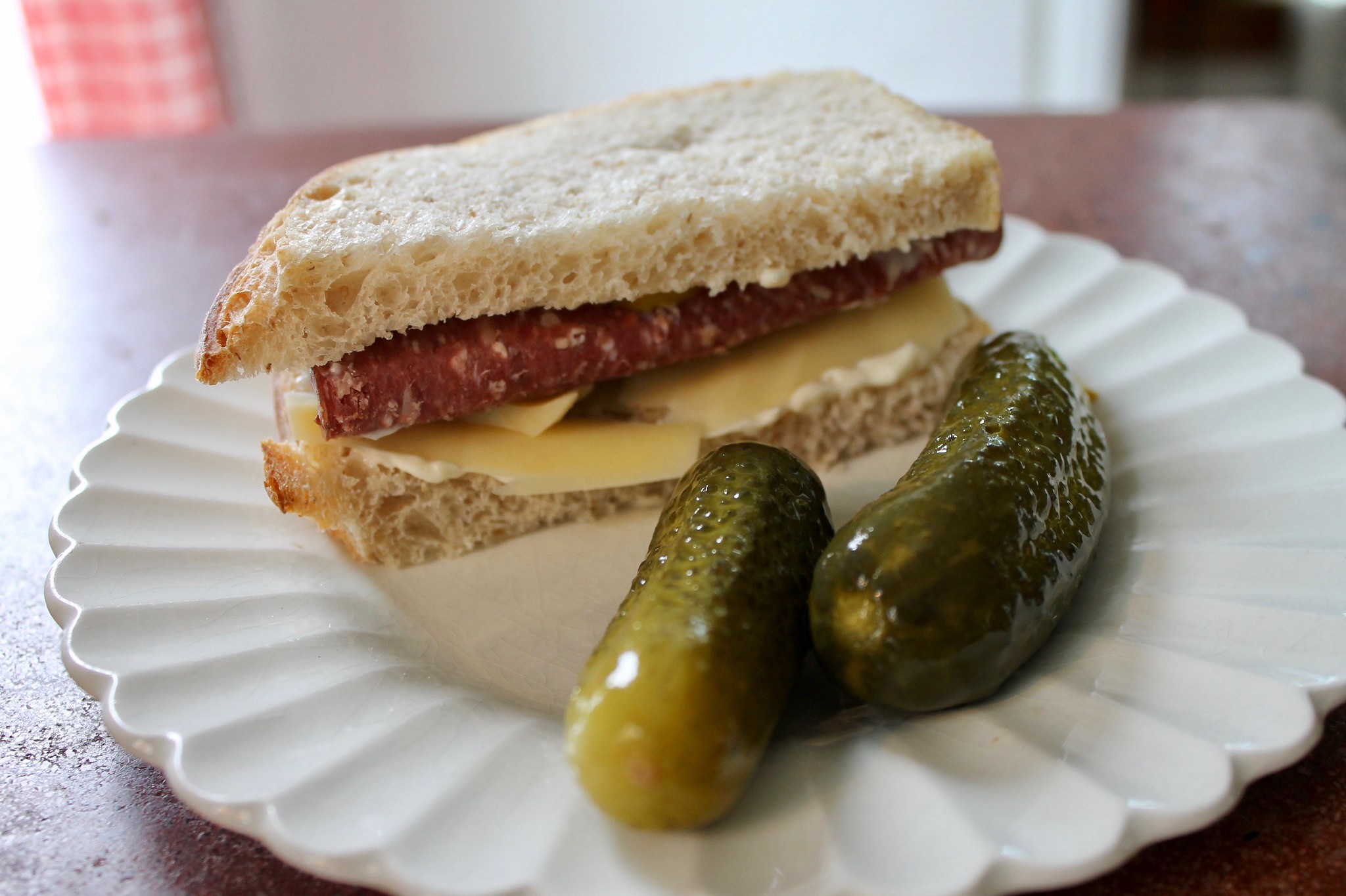 The kids adore sandwiches, especially when there’s lebanon balogna. Everyone differs on their cheese preferences. Some go for “yellow” cheese (Colby, mild cheddar), but I’m partial to Jarlsburg, a.k.a “hole-y cheese.” The dill pickles are from Costco, the only dills my kids like, though I detect a displeasing chemical taste. 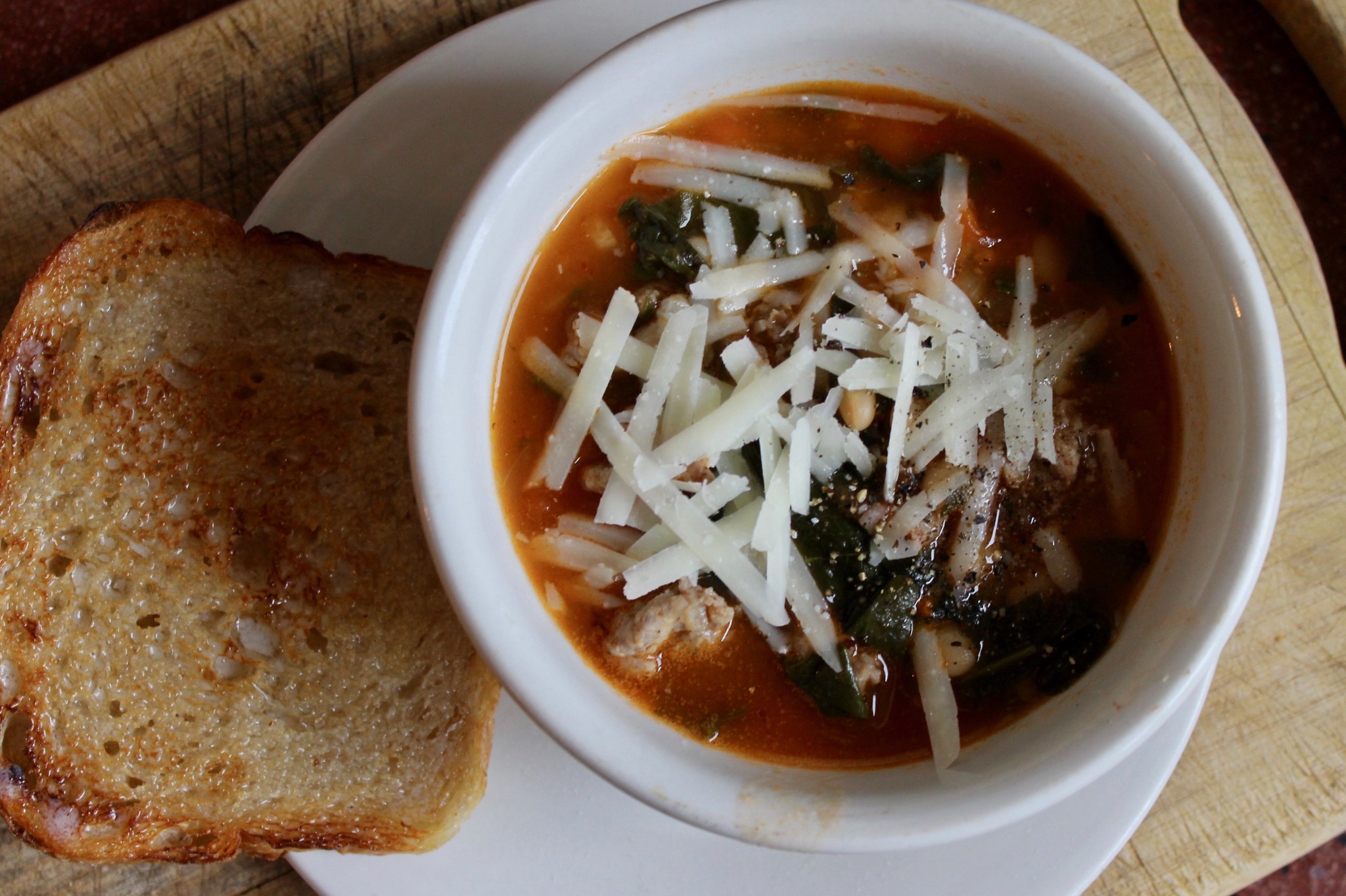 A cool day (finally!) equals soup: white beans, a bag of frozen chard from my mother’s garden, a jar of tomatoes that didn’t seal, sausage from my cousin Zoe, frozen turkey broth, with buttered sourdough toast on the side. I froze the leftovers and then regretted it. I wanted more. 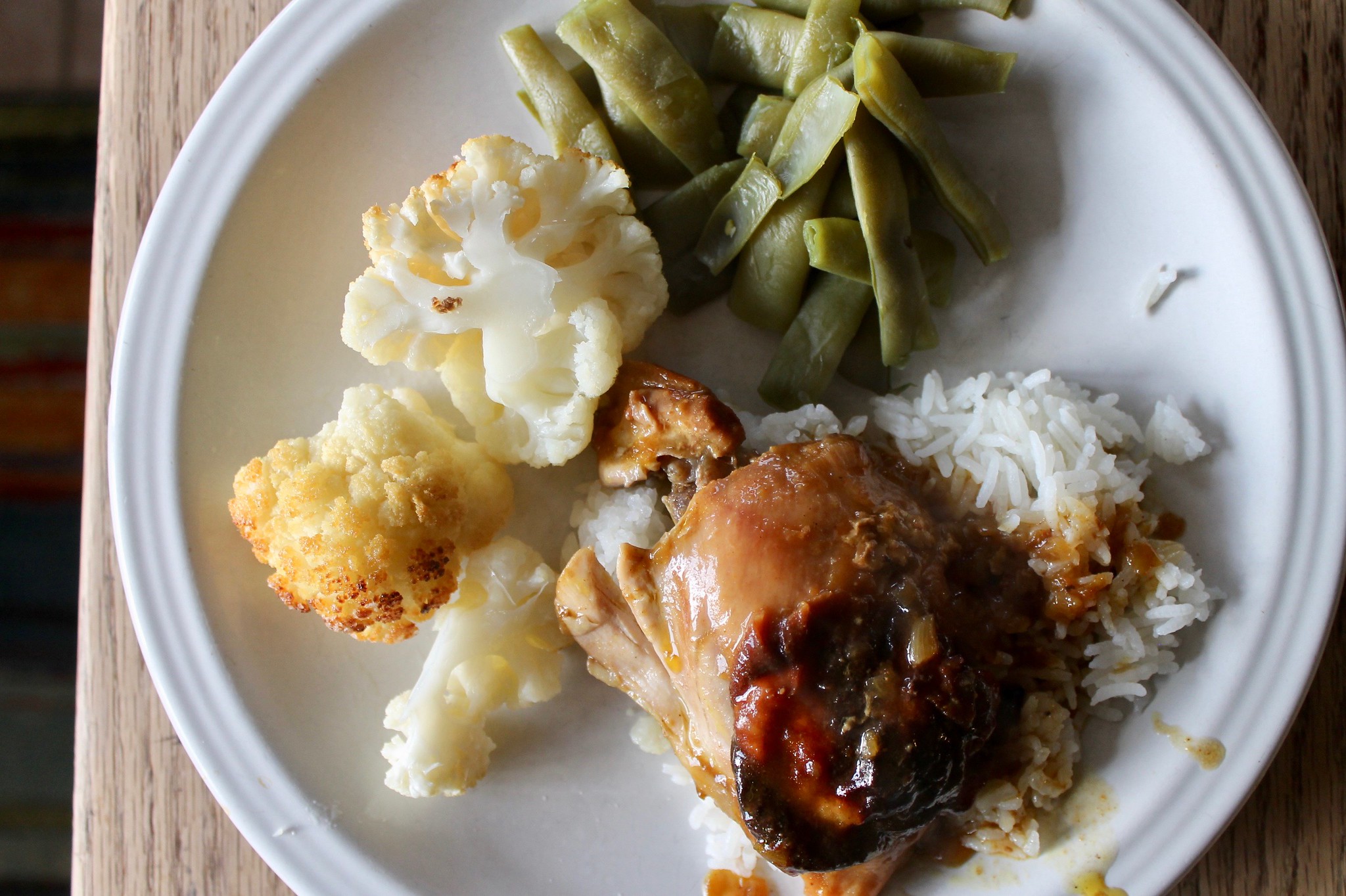 My older daughter insists she can’t cook, which is utterly ridiculous — she just doesn’t want to — so I said she had to cook dinner but it had to be real food, not eggs. And then in the end, I chose the menu for her — Indian chicken, rice, green beans — and left the house. I got a lot of panicked phone calls, but she did it. Shortly before supper, I slipped a whole head of cauliflower into the over to roast (an experiment): it flopped. 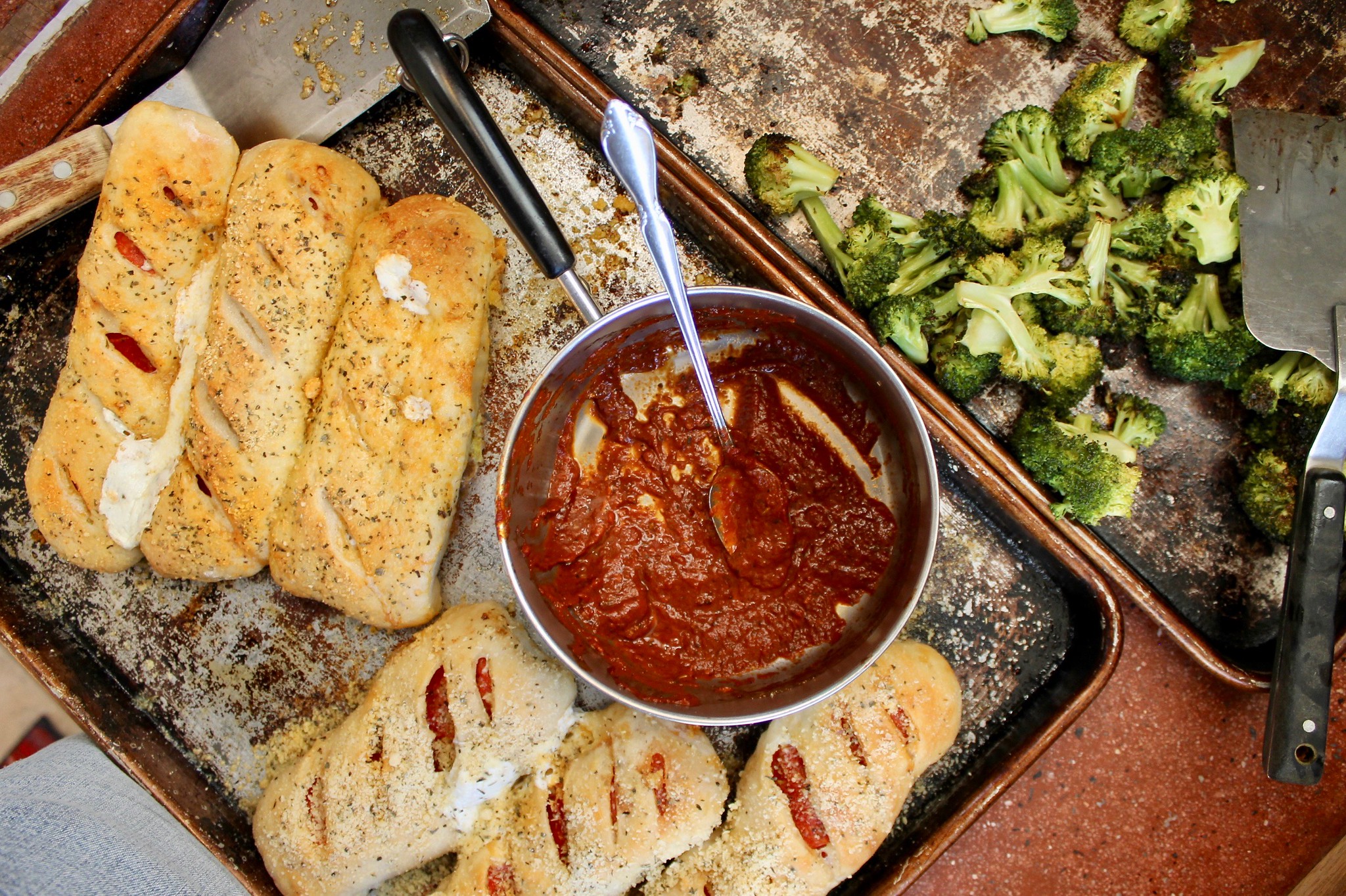 I had a bunch of fresh mozzarella that I was afraid would soon go bad, so I made pizza rolls: hunks of five-minute dough rolled into sloppy rectangles, sprinkled with garlic powder and Italian seasoning, and layered with pepperoni and lots of fresh mozz, rolled up and, after baking, brushed with melted butter and sprinkled with more garlic powder, Italian seasoning, and Parmesan. OUT OF THIS WORLD. (Dipping sauce from a half pint of roasted tomato sauce that hadn’t sealed properly and that I spiced up with spices, and, on the side, roasted broccoli with lemon.)

This same time, years previous: evening feeding, the quotidian (9.26.16), better than cake, test your movies!, the run around, 37, she outdid herself, painting my belly, vacationing until it hurts.