For my birthday, my requests were as follows:

If they wanted to make me a cake, a cheesecake would be nice, but I really didn’t care what kind of cake it was as long as I wasn’t in charge. I wanted to write for a long time. Also, I wanted to go on a family hike (but not on the actual day since everyone was at school/working and probably not until after the relief sale — so only in theory, I guess; we’ll see if it actually happens) and play Ultimate Frisbee with the kids.

the ultimate
For the last few weeks, all four of my kids have been playing Ultimate twice a week at the local university. It’s for anyone — just a bunch of pick-up games — and intergenerational.

You should come, Mom, they kept saying, but since it’d been a good twenty years since I’d last played, and I wasn’t even sure I remembered how to catch a frisbee, much less throw one, and because I was afraid I’d sprain an ankle or something, I kept declining.

But then at our church retreat last weekend, I got roped into playing and it turned out to be loads of fun (never mind that I about died from all the running and jumping), so when I realized that the community group would be playing on my birthday, I decided that that’s what I wanted to do to celebrate: play Ultimate with my kids. 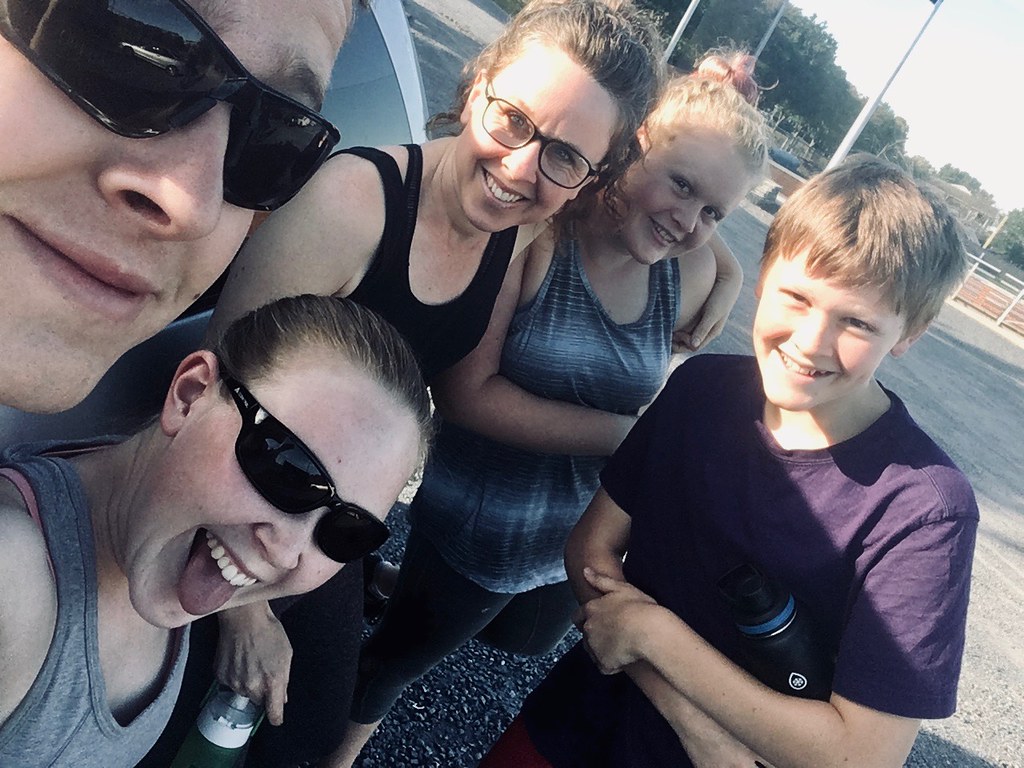 (And then my dad showed up, too, so we were three generations, yay us!)

the day
I spent the day writing, and running errands and blogging and basically not thinking about anyone but myself. When I arrived home mid-afternoon, the kids were over at my mom’s, and the house, I noticed, was spotless.

Later that night after the kids had all gone up to bed, I found this: 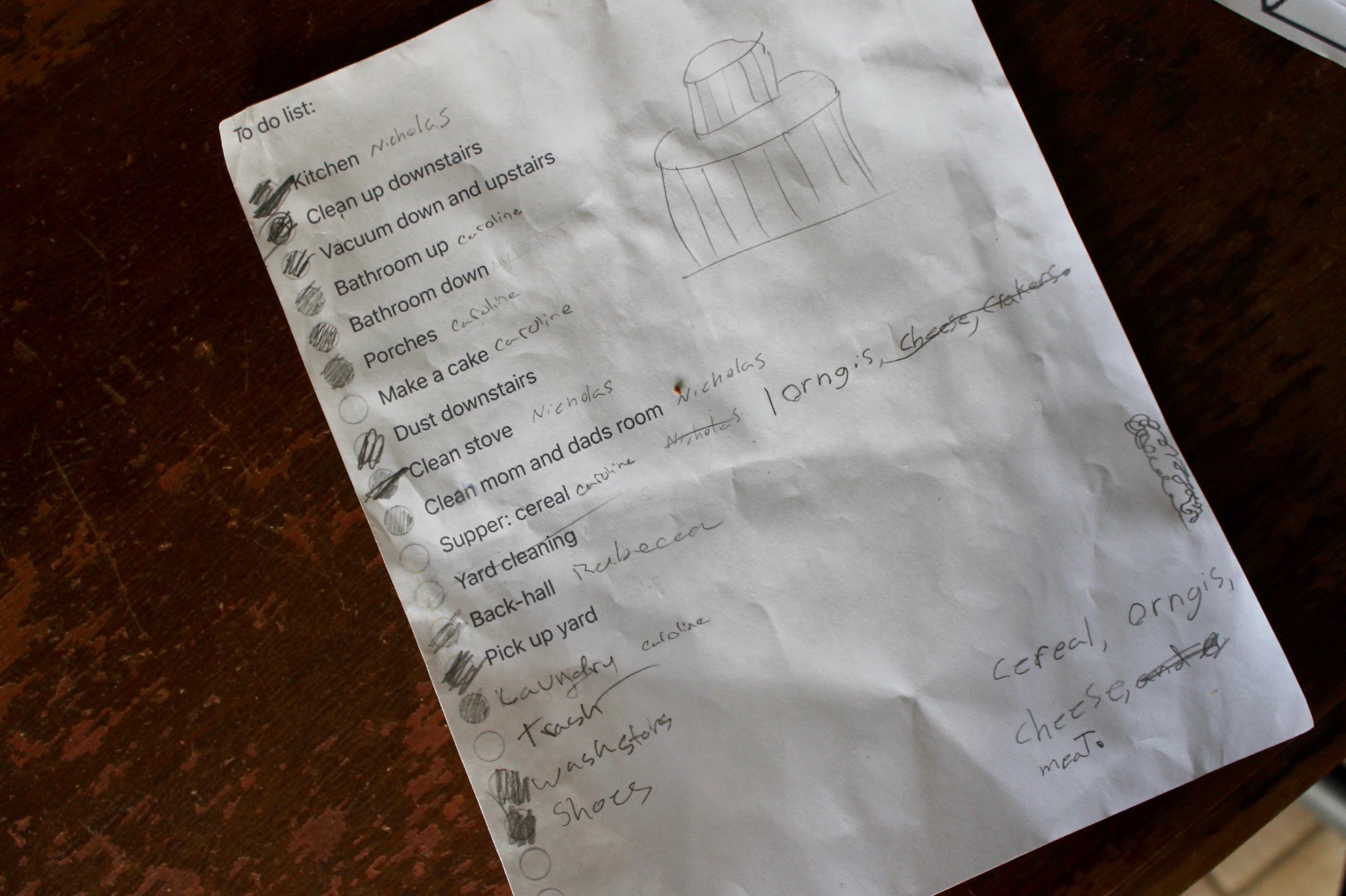 and my jaw dropped, bless their little hearts. (Also, apparently I’m not the only one who knows how to make a list.) 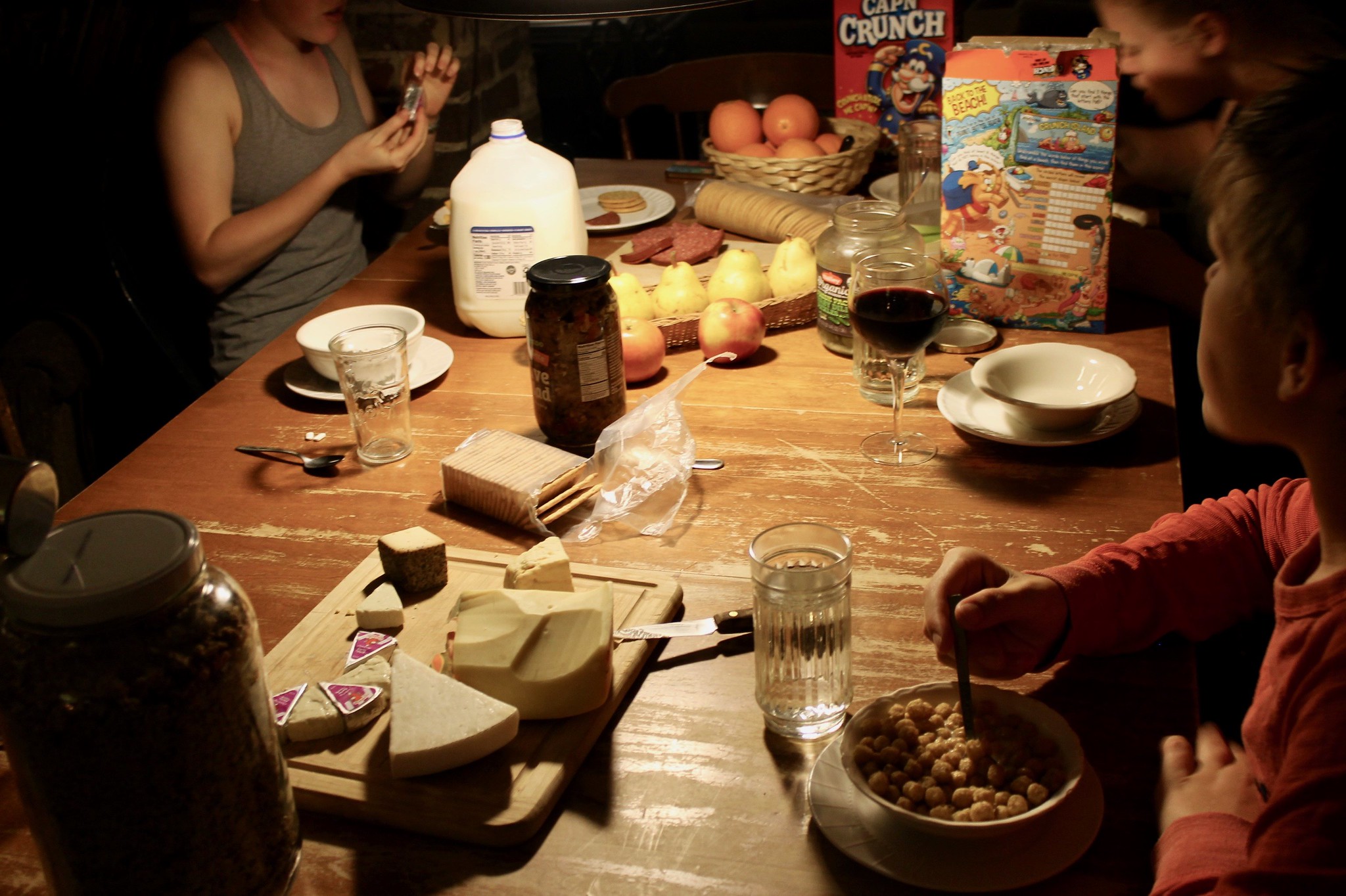 I couldn’t have been happier.

then, the cake
I knew it wasn’t going to be a cheesecake, since my favorite cheesecake has to be made 24 hours in advance and no one appeared to be preparing anything ahead of time (as they are wont to do). But I didn’t much care; just not having to think about anything was gift enough.

But! Supper over, they made me cover my eyes and presented me with a wee baby chocolate cake, which didn’t fool me for a second — no one goes to the trouble of mixing up only a wee bit of cake batter. And sure enough, then the real cake appeared. 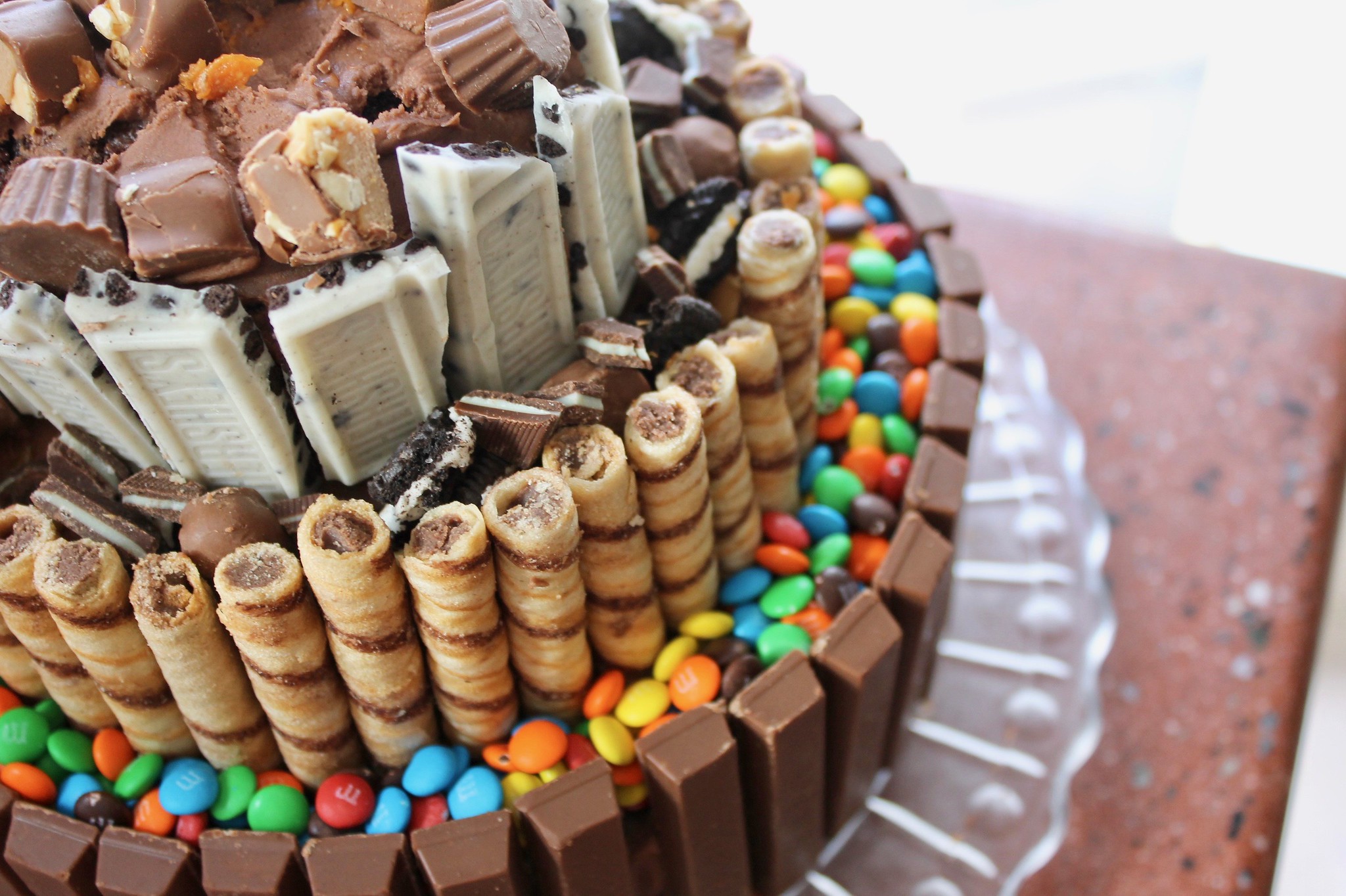 a day-after photo, since it was too dark the night of

Three layers, and each layer brazenly and extravagantly studded, sprinkled, piled, and armoured in candy, with a jauntly red ribbon wrapped round the bottom layer. I couldn’t get over it. It was utterly spectacular. 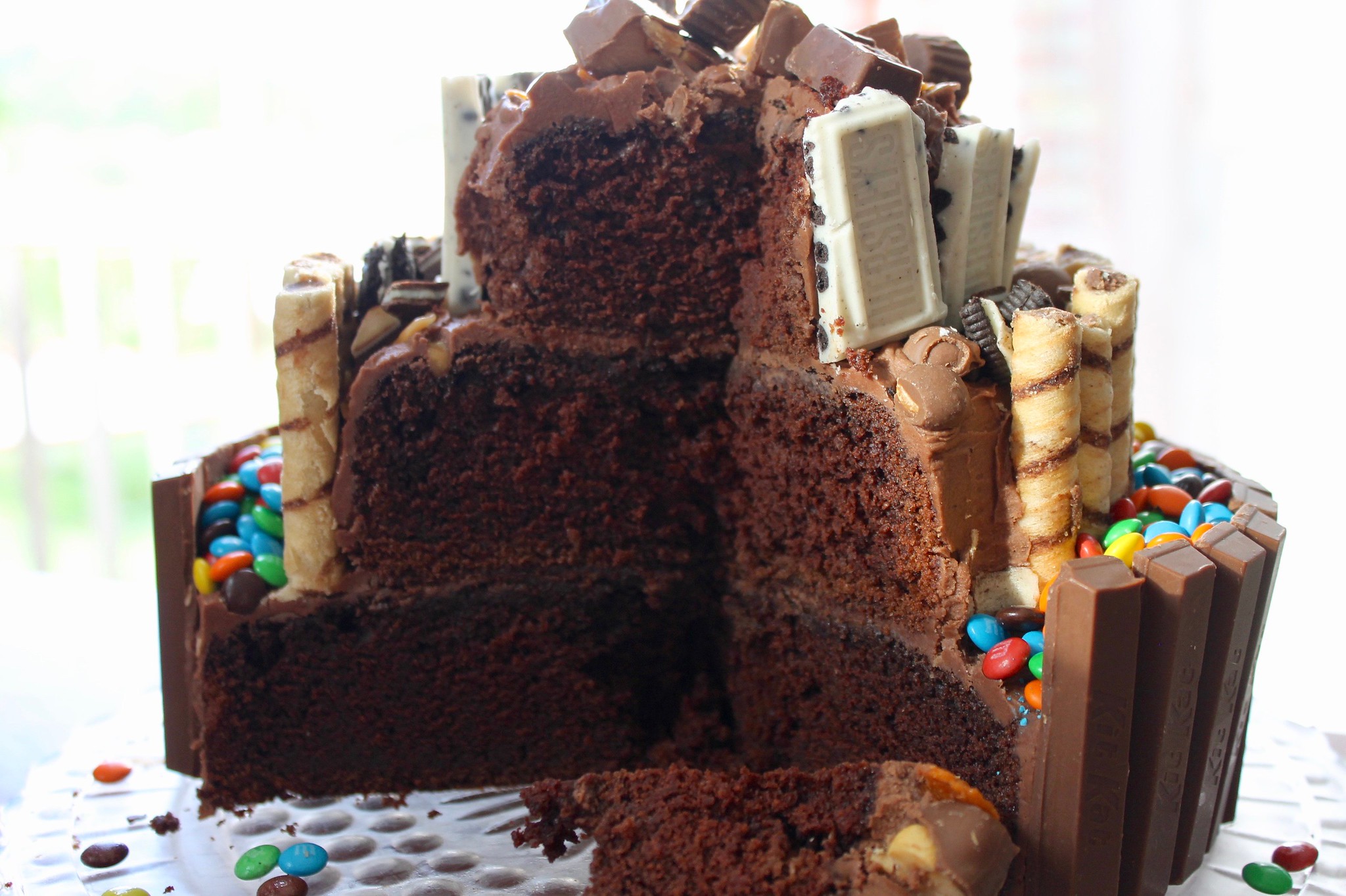 They eagerly filled me in on the details: how my younger daughter had made the cakes and my older daughter had bought an obscene amount of candy. How they’d taken everything to my parents’ house (my parents weren’t at home) and set up their cake shop there. How they’d printed off plans from the internet and measured and calculated and chopped and iced and decorated, all working together. 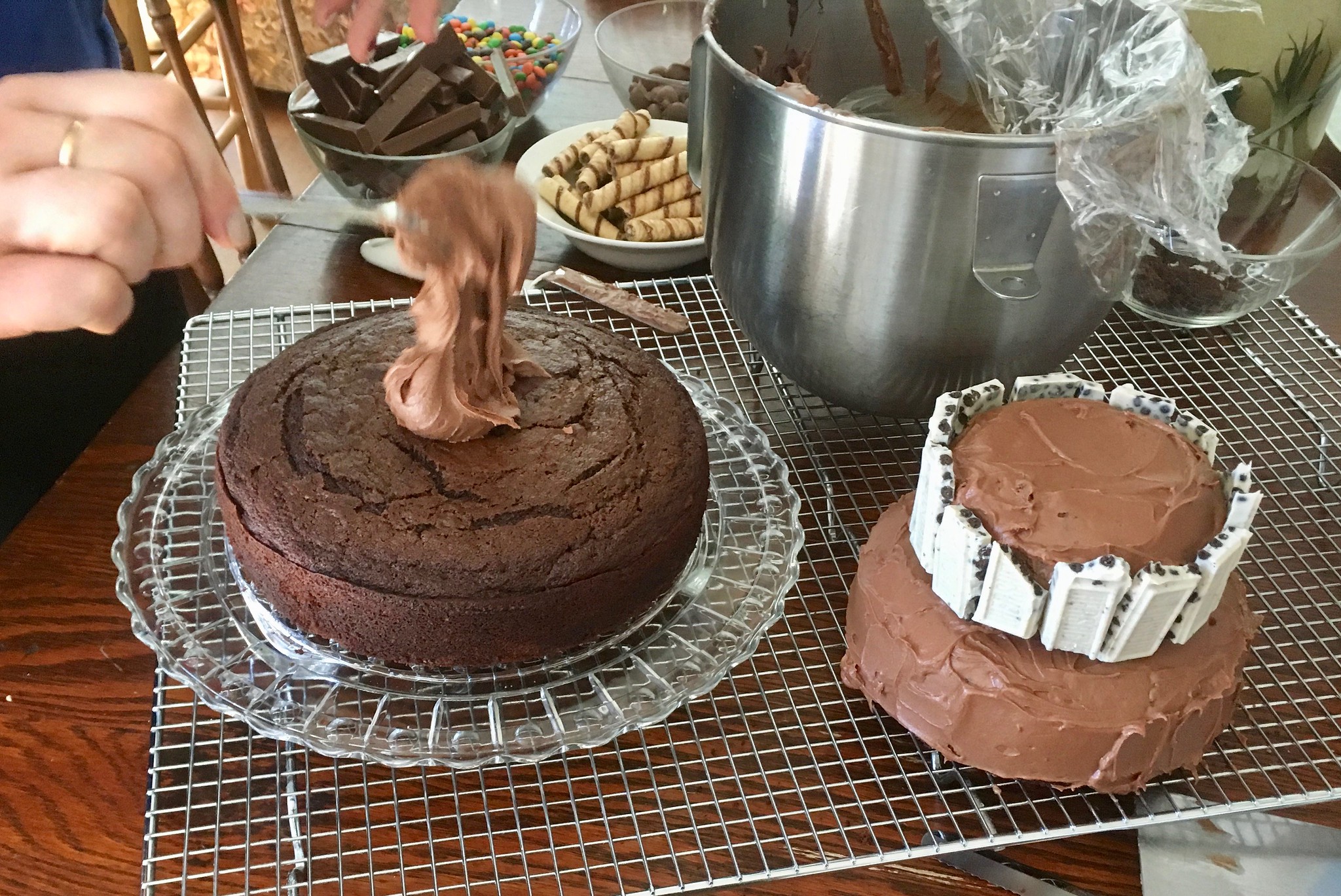 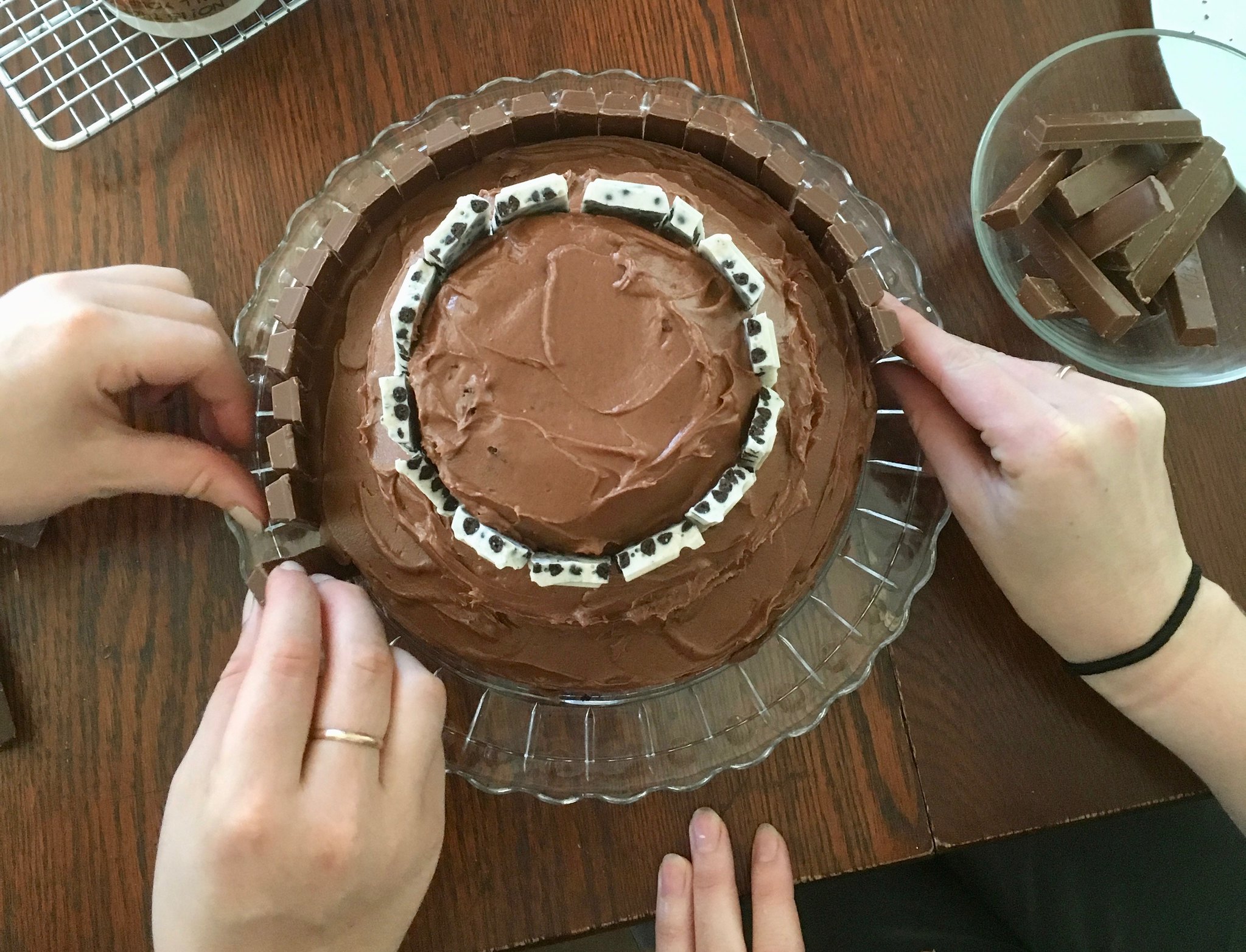 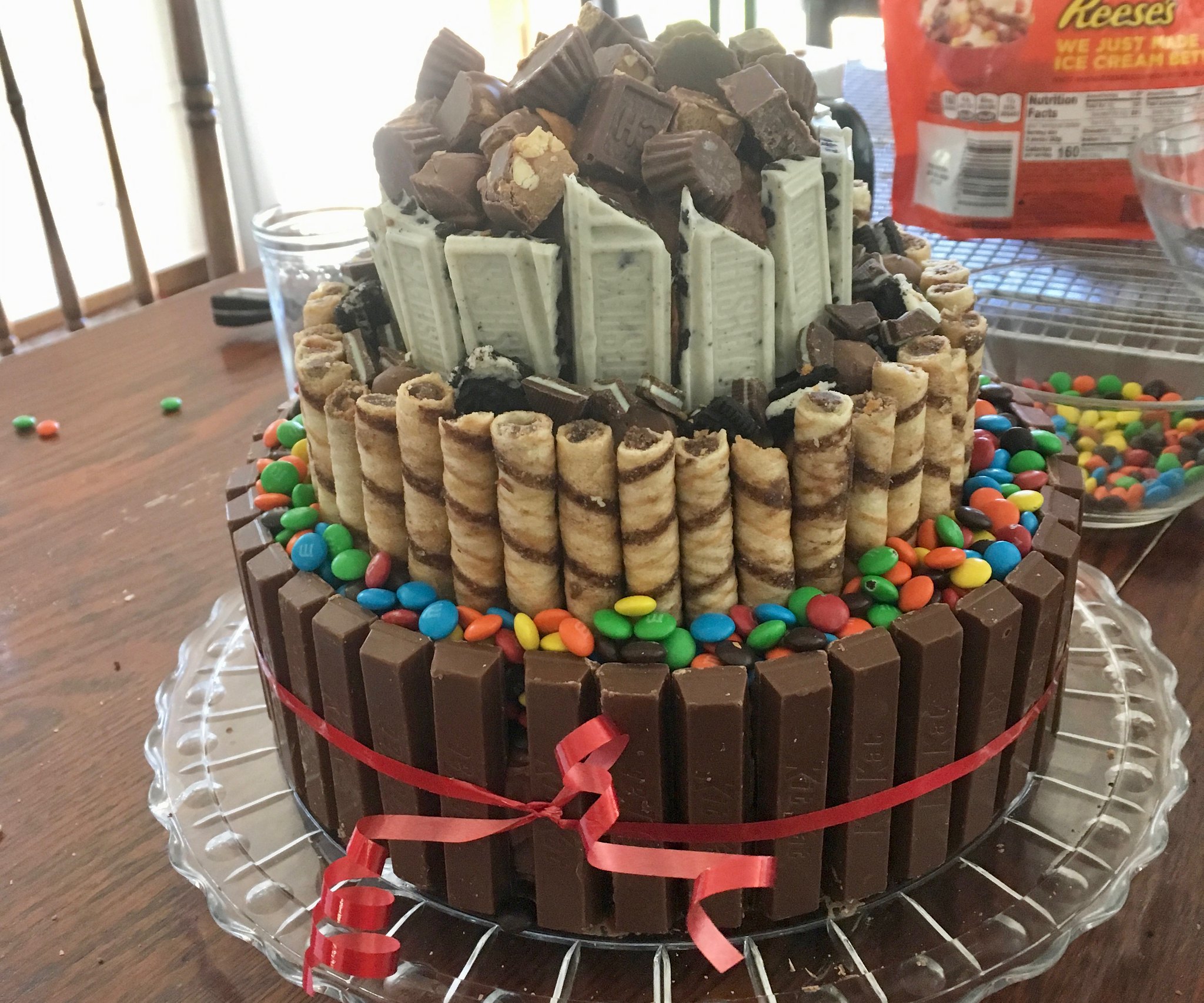 That, plus the candy, made it pretty much the sweetest cake ever.

This same time, years previous: hey-hey! look who’s here!, the soiree of 2016, welcome home to the circus, getting shod, the quotidian (9.29.14), pointless and chatty, chocolate birthday cake with vanilla water frosting, a jiggle on the wild side.