You guys, this kid! 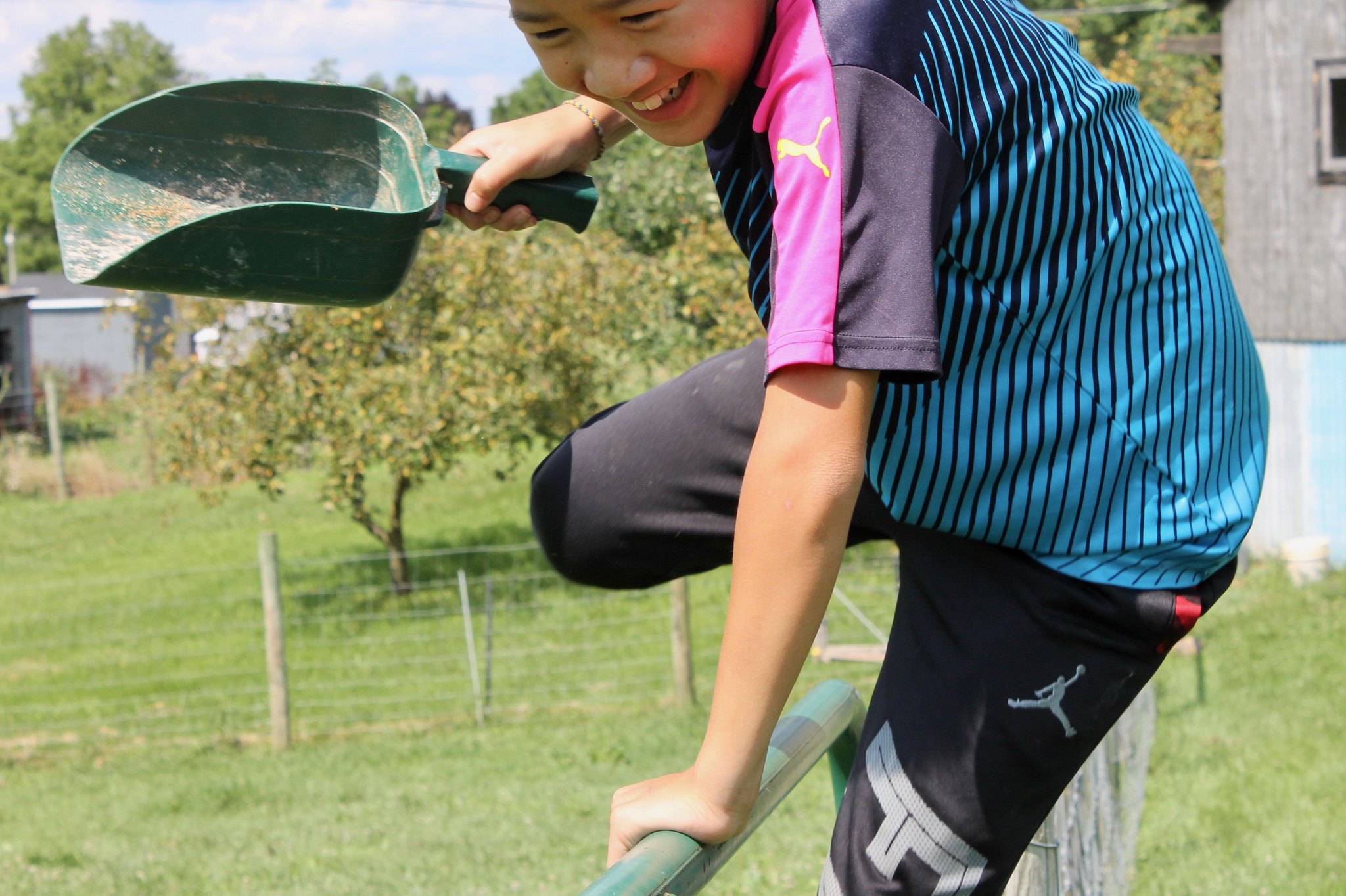 Funny, smart, and curious, we fell in love with him right from the get-go. Always ready to try something new — oatmeal and blueberries, a waterslide, sleeping under the stars on the trampoline — he attacked the week head-on. 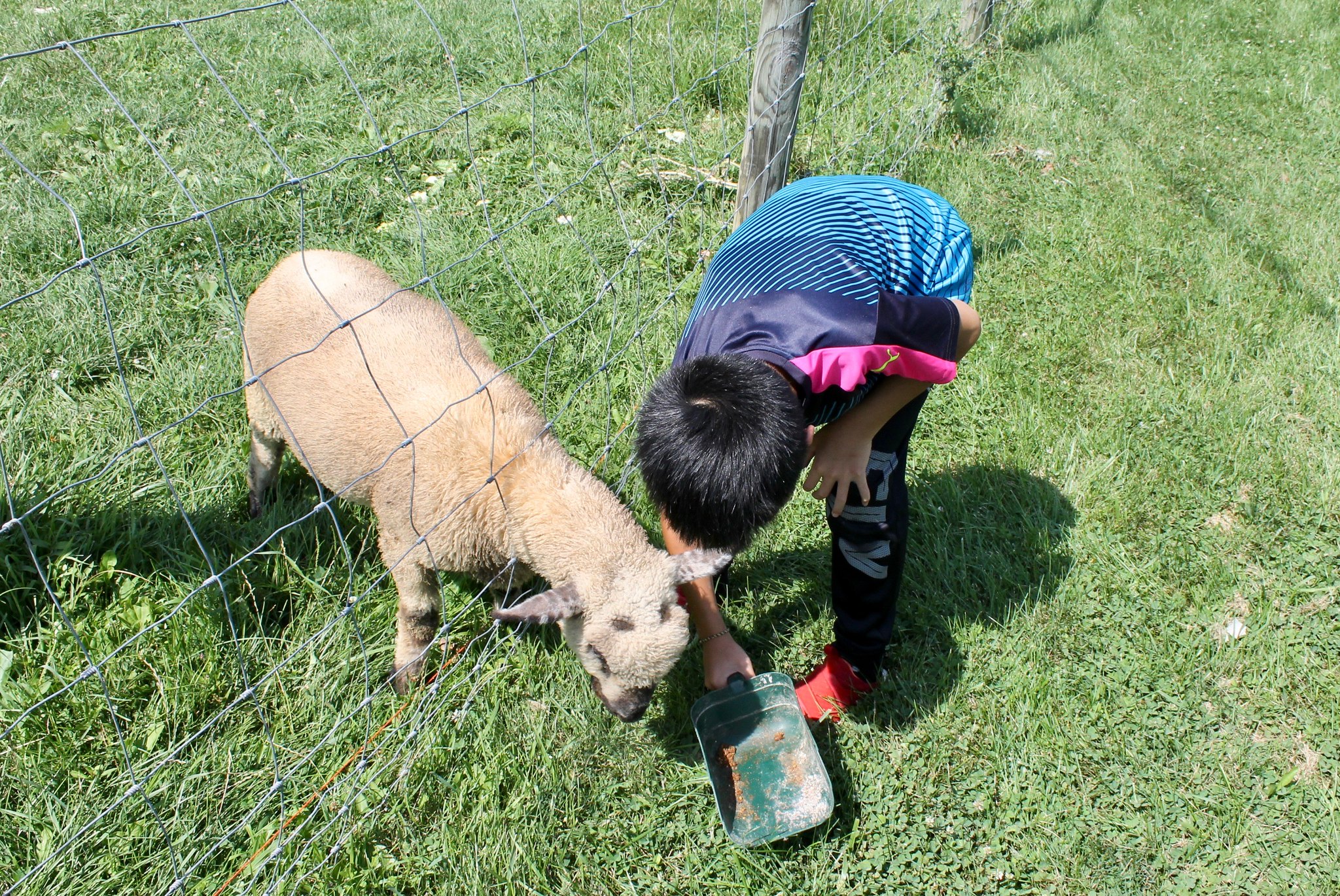 One of his goals, he told me, was to see as many animals as possible. That first morning, he came thudding down the stairs. “I need to go see the cows!” he said as he shot through the kitchen and out the door. 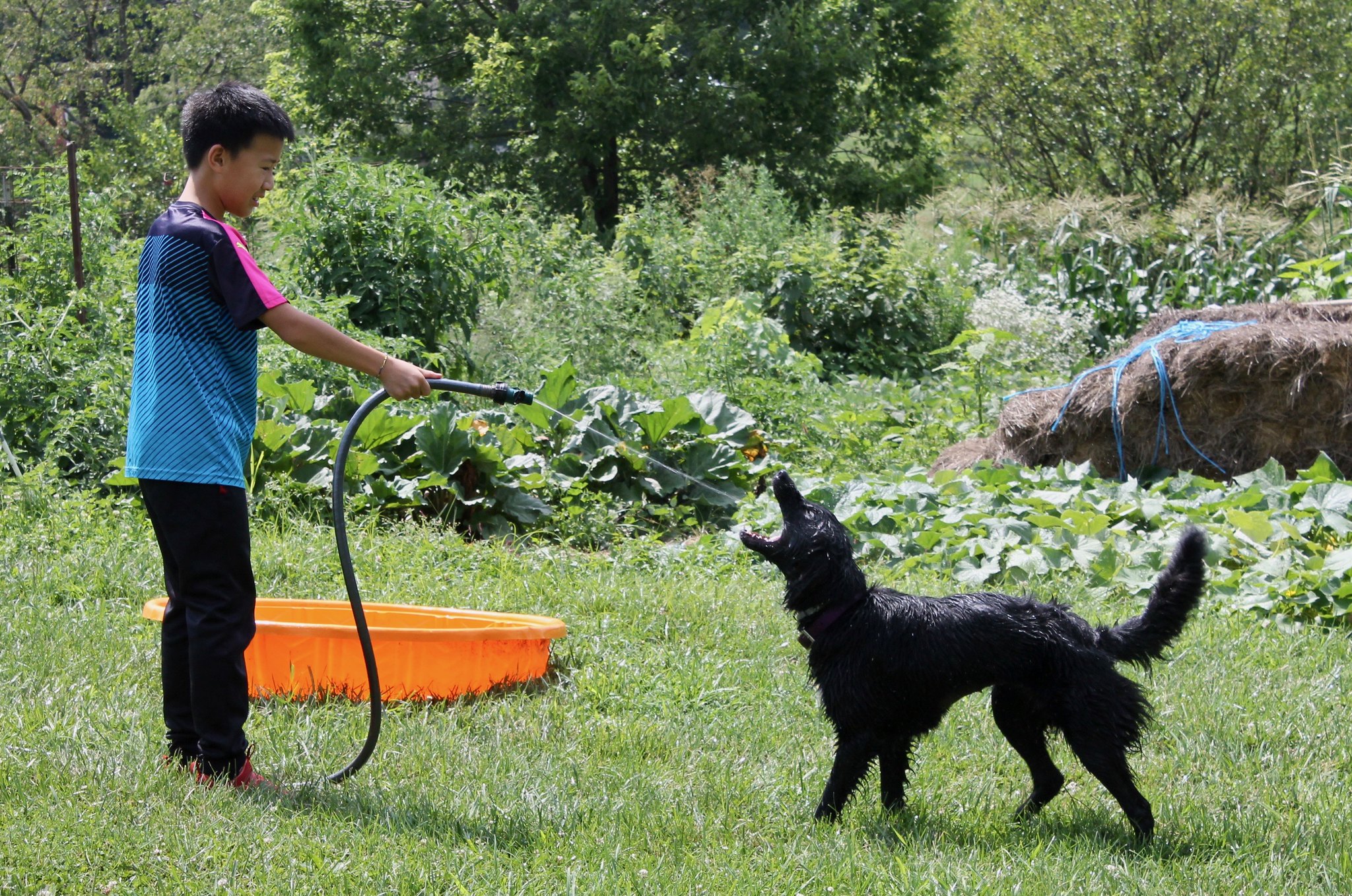 We didn’t get to treat him to a real, live bear, but along with the ordinary creatures that comprise our farm menagerie, he got to see a rat snake (hiding in the rafter’s in my brother’s basement), deer, assorted little fishies, the hind leg of a dead baby bunny dangling from Charlotte’s mouth), mice (also dead, thank goodness). He also got to try his hand at milking a cow. (He didn’t like the milk warm, but said it was fine chilled.) 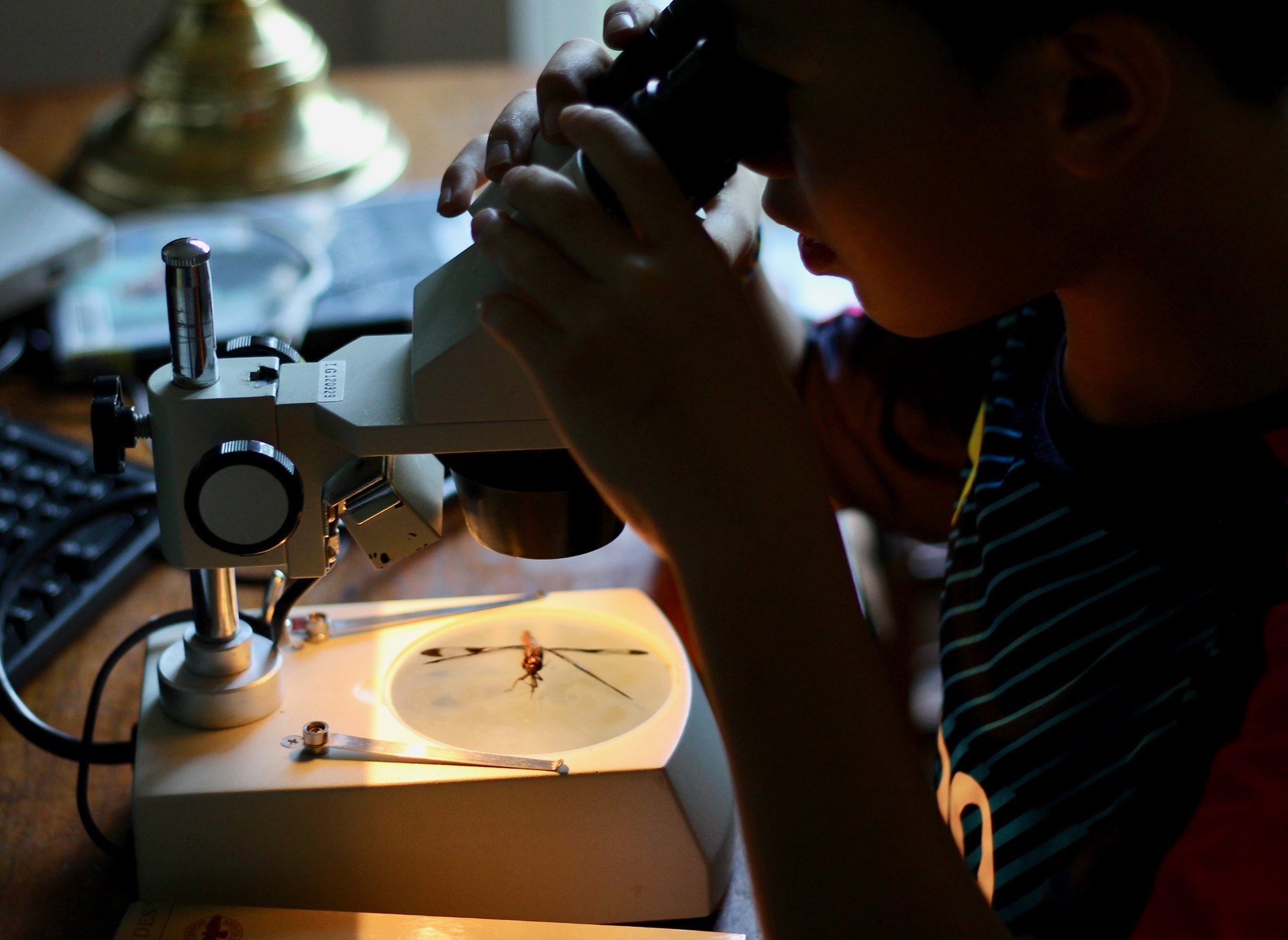 Studying the dragonfly thingy that the cat killed.

The boys plucked a hornworm caterpillar from a tomato plant and then decided to keep it in a container. The next day they noticed maggots were crawling out through its skin. My younger son wanted to cut it open to investigate but Fresh Air boy said they needed to research it first.

Soon we were all gathered around the computer, slack-jawed, learning about parasitic wasps who lay their eggs in caterpillars and then, days later, their larvae chew their way out through the caterpillar’s skin and then the caterpillar, whose mind has been hijacked by the wasp, makes its cacoon around them and not itself. 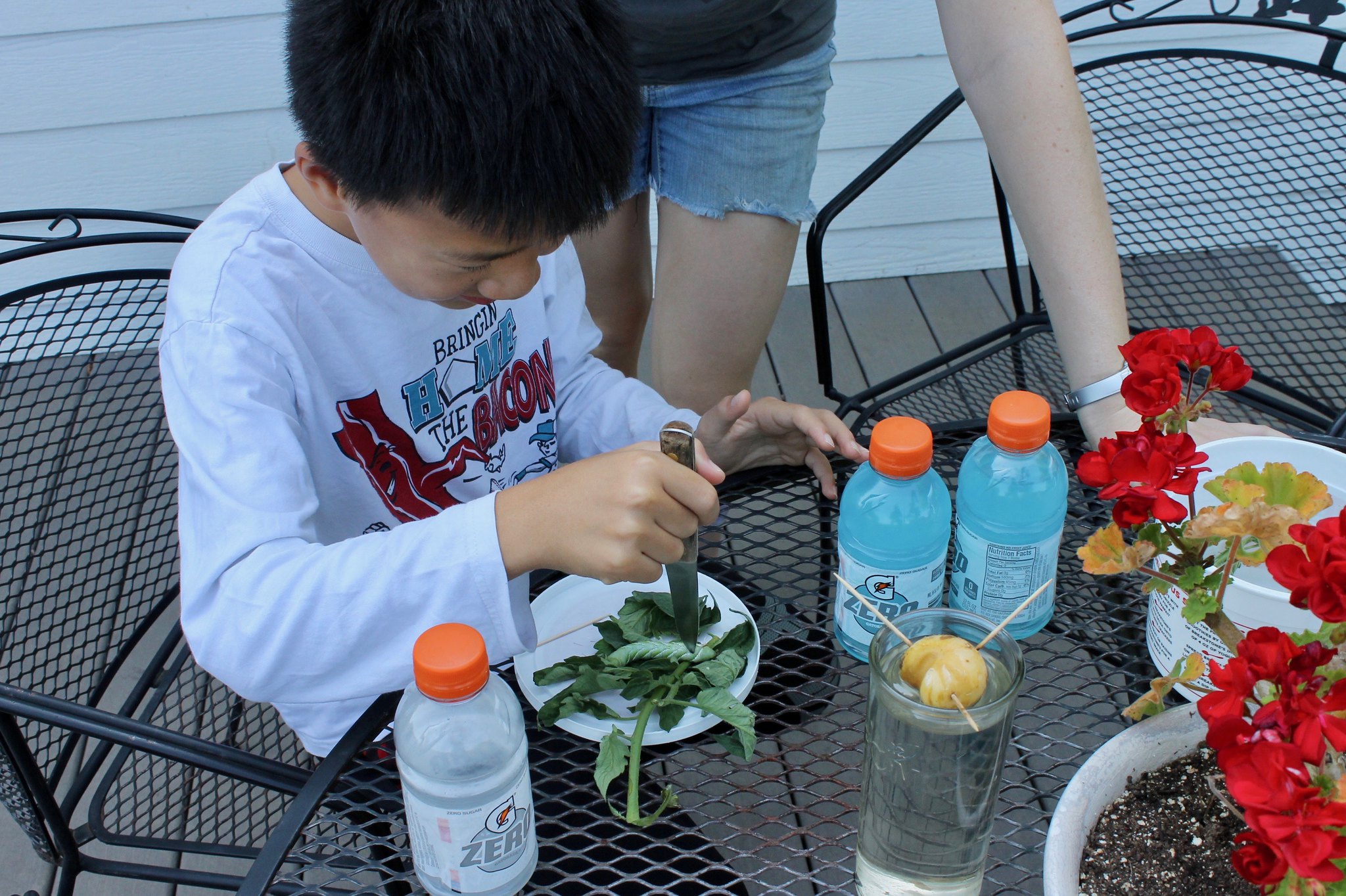 And then they cut it open — and yep, its belly was packed full with larvae! 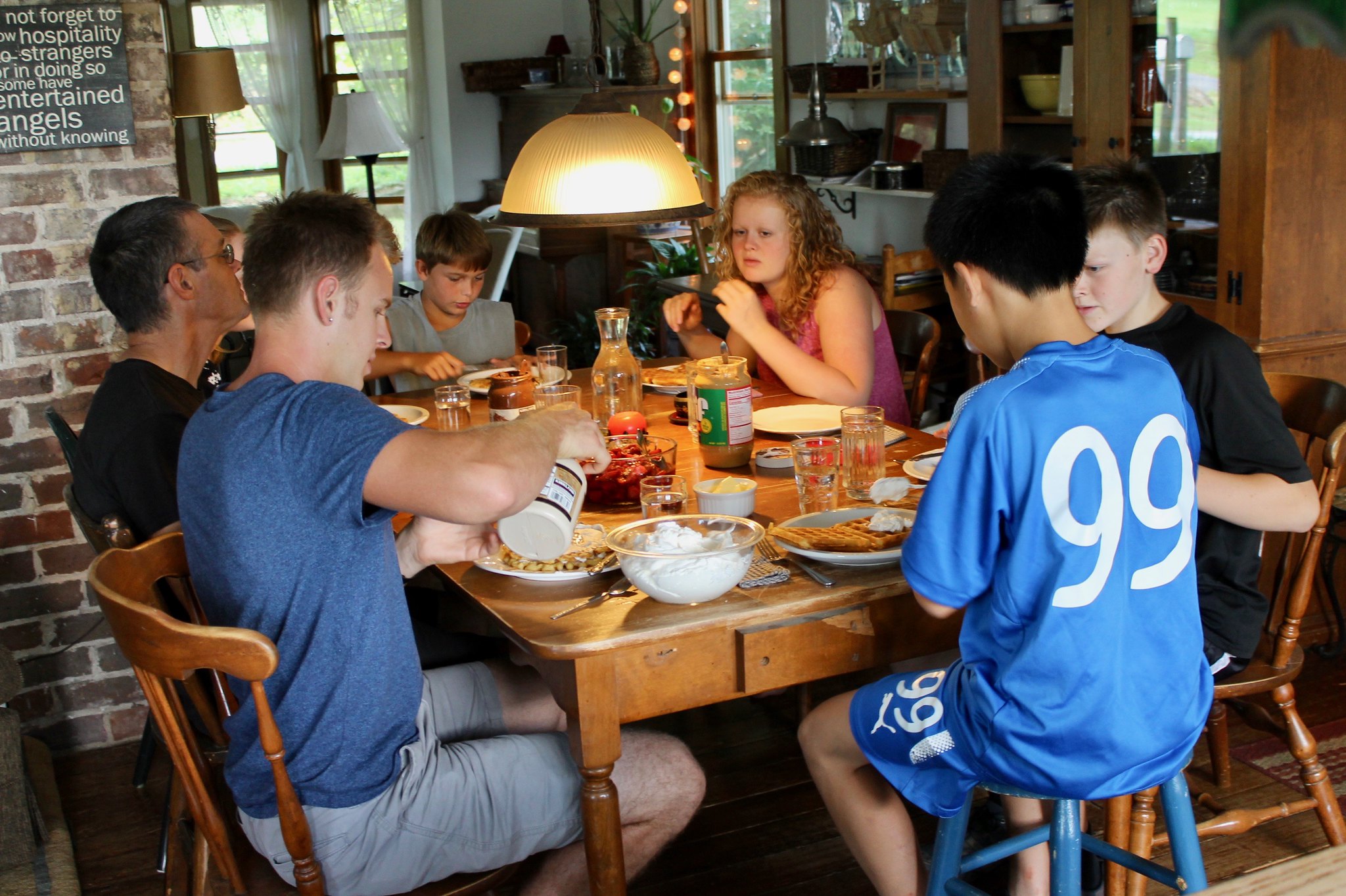 A great eater (highly appreciative, too!), he loved applesauce and granola, bread and strawberry jam, watermelon, milk, skittles, nectarines, waffles, chocolate cake, bacon, pizza, corn-on-the-cob. When I made him toast one morning, he told me he wanted to butter it himself this time.

“Why? Did I put too much butter on it last time?”

“No, it’s just that it’s so satisfying to spread.” 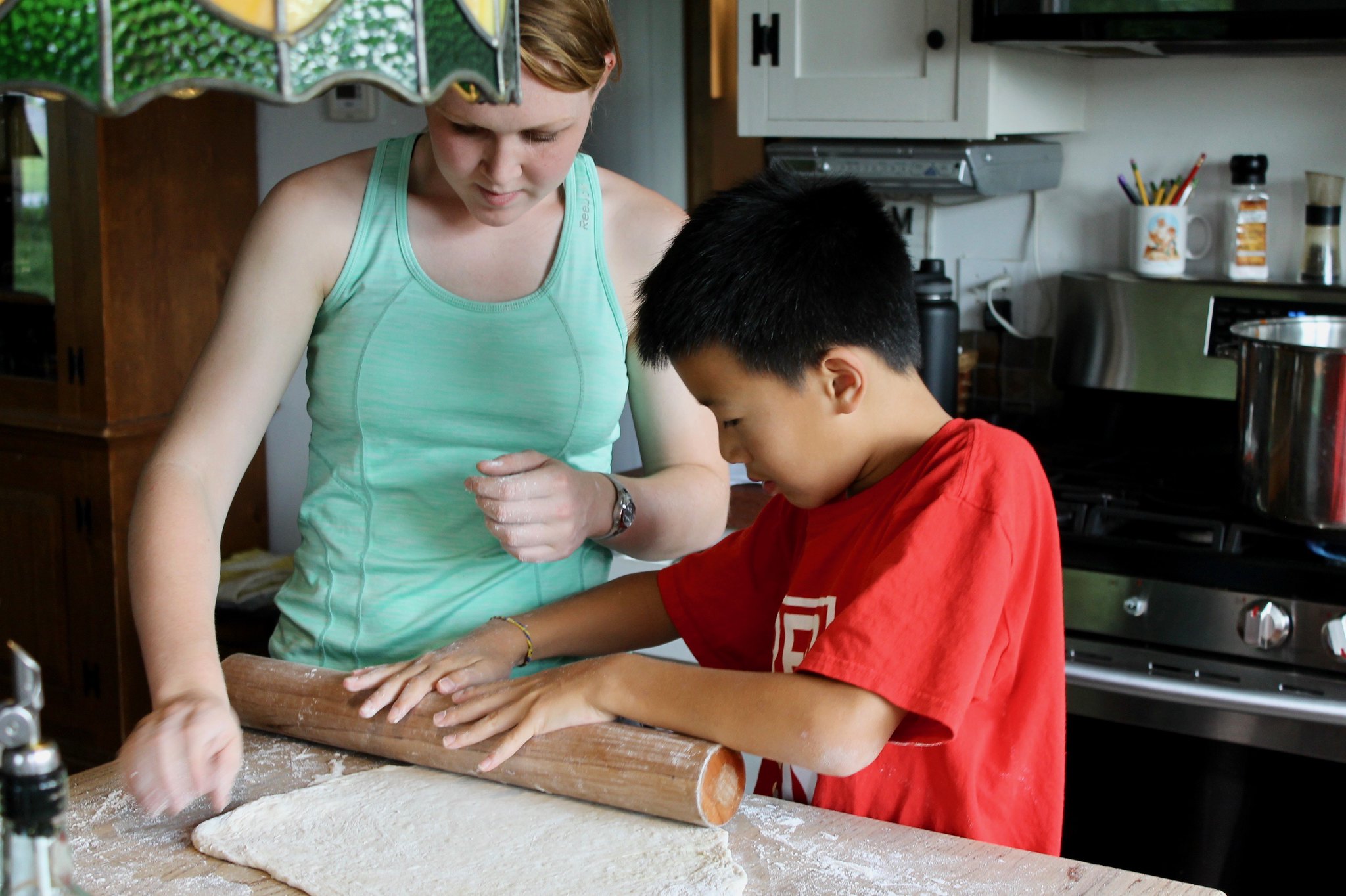 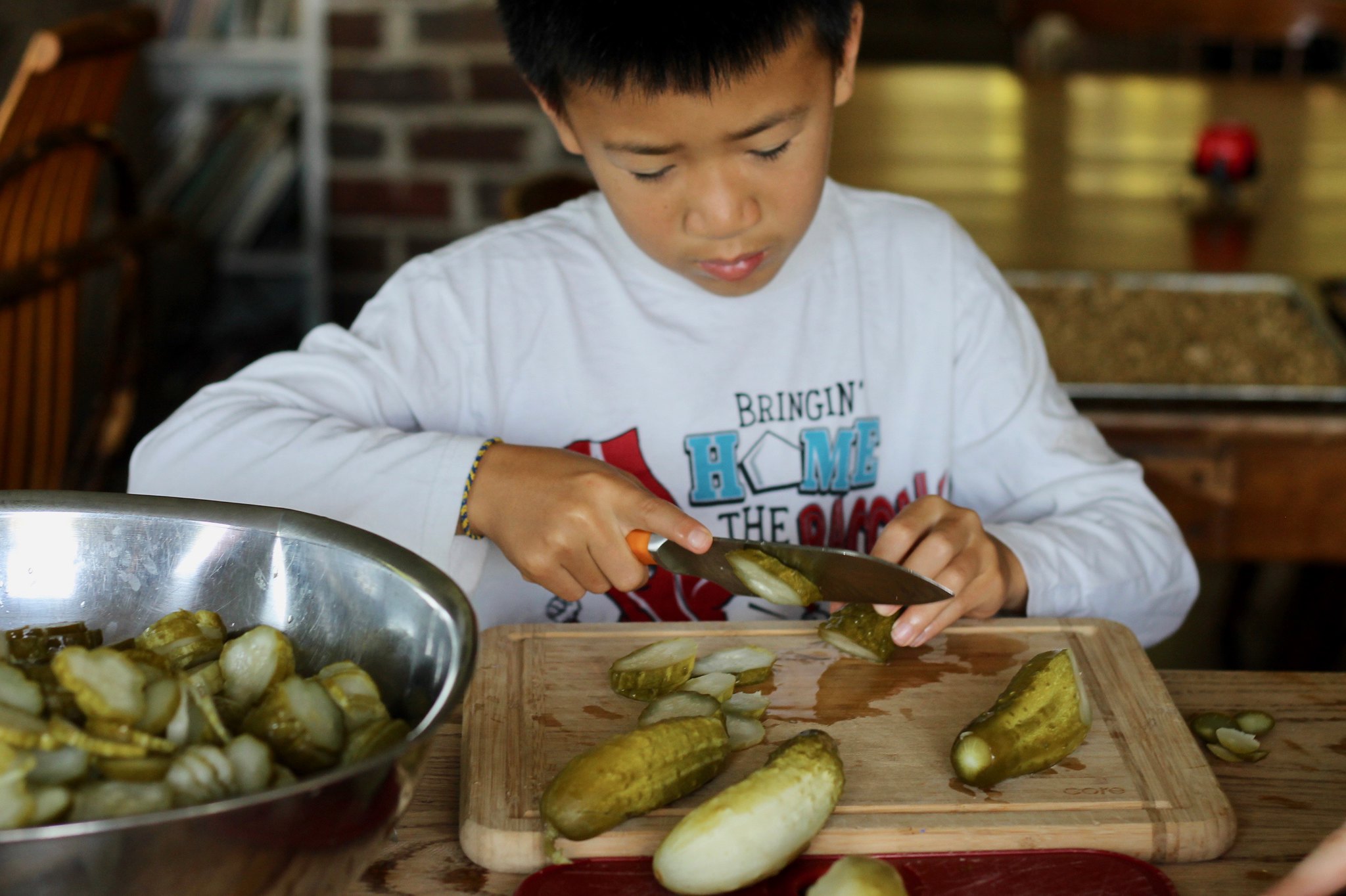 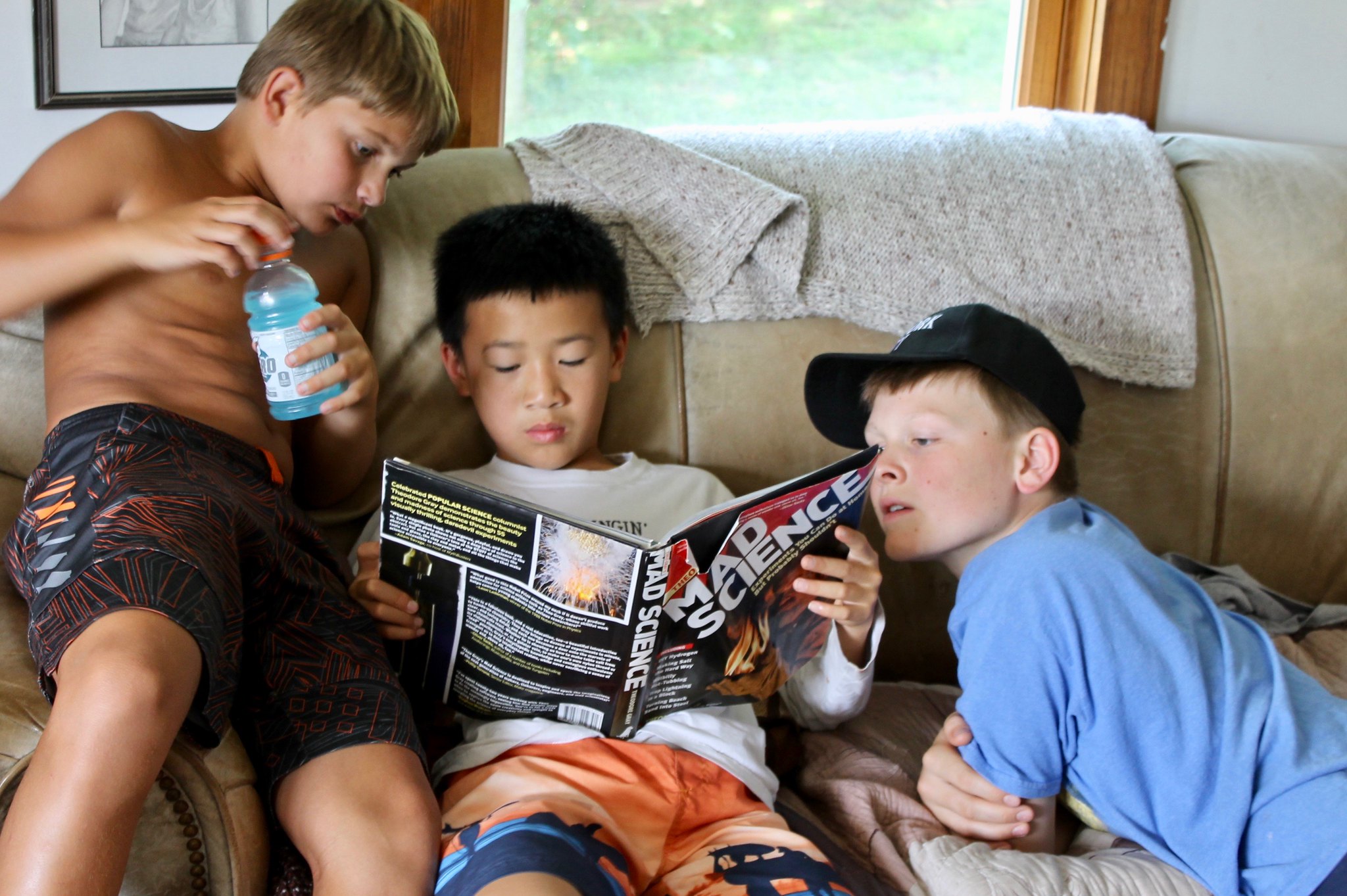 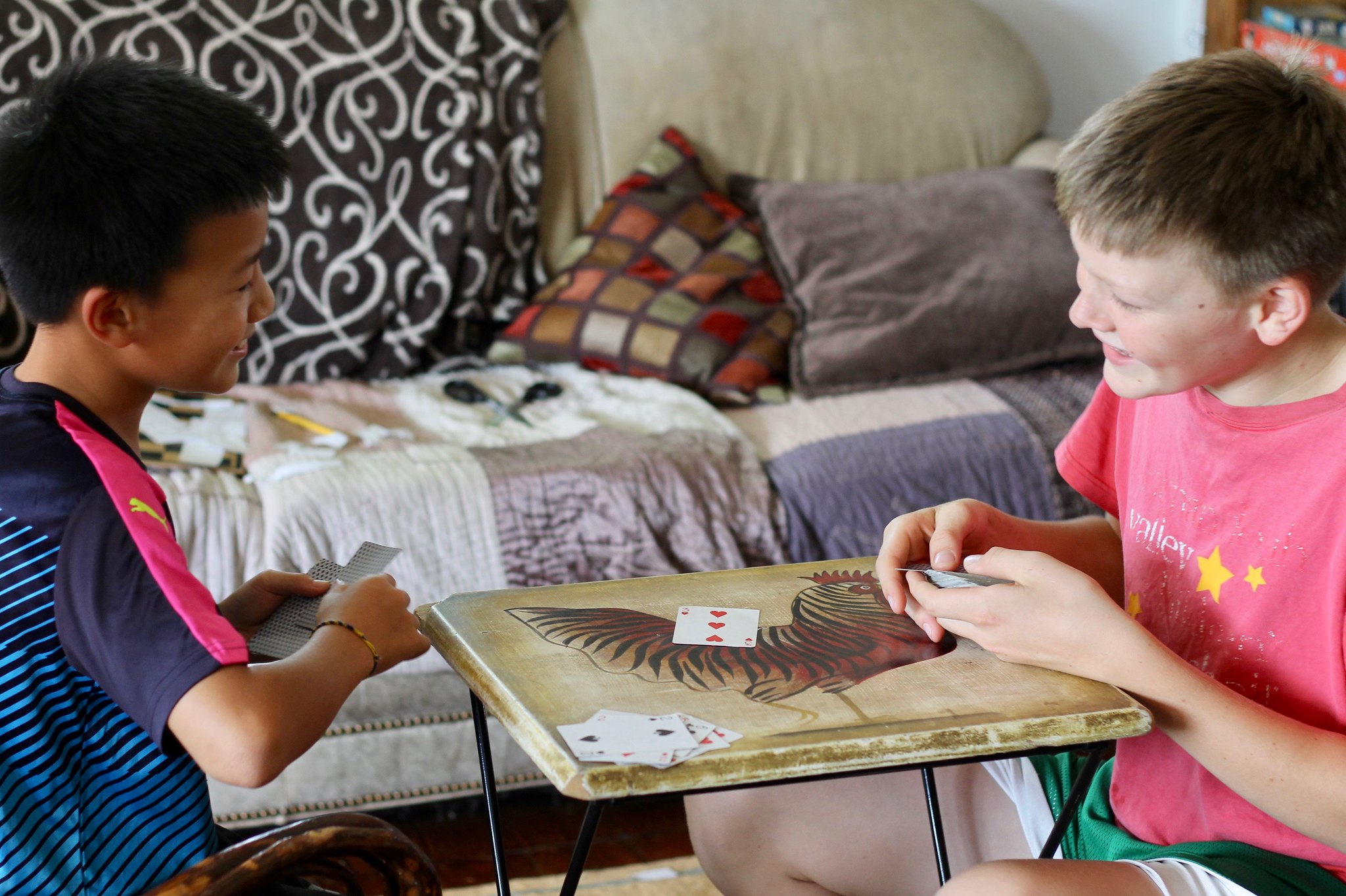 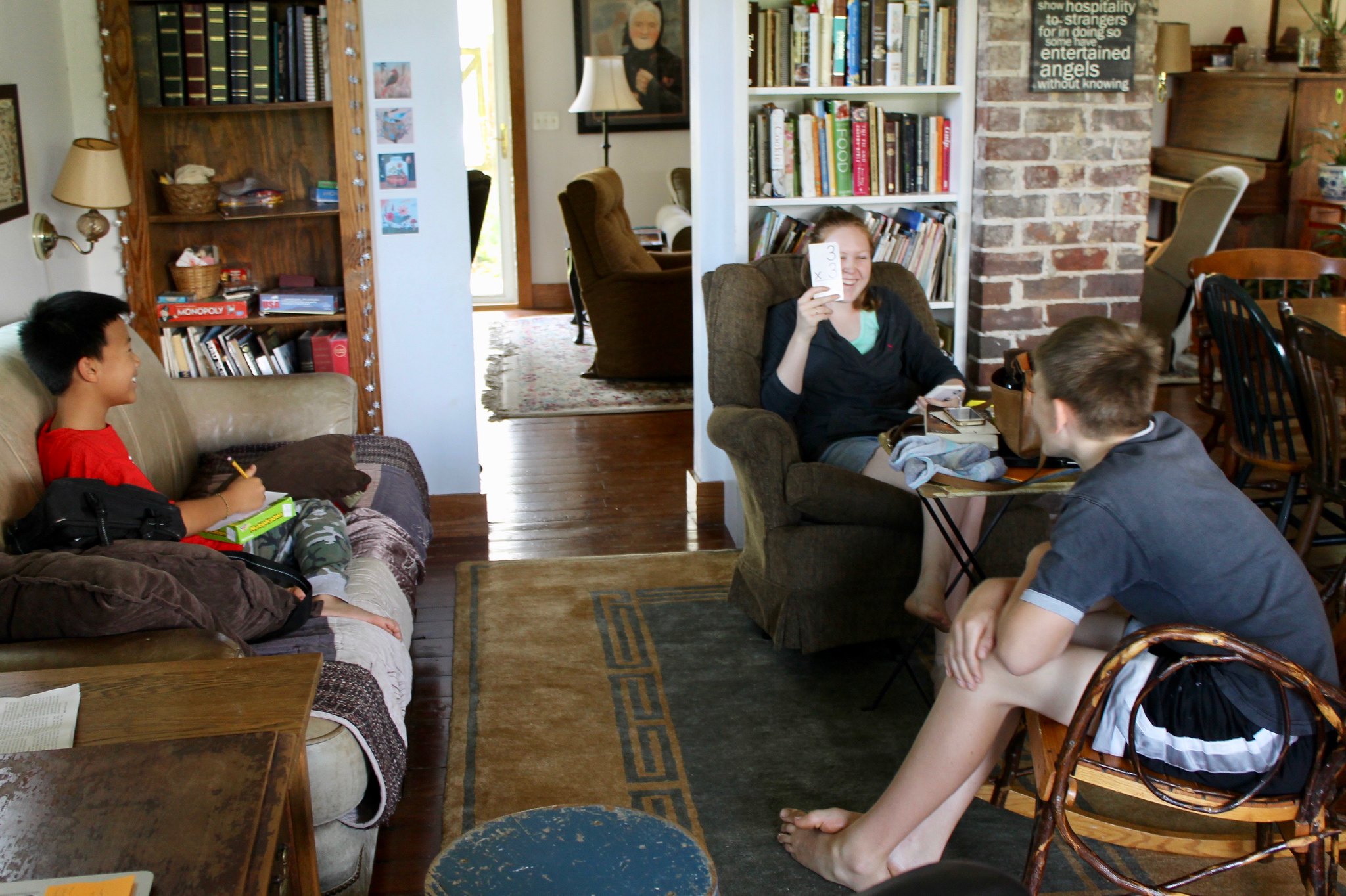 Among all the activities we did — swimming in the neighbors’ pool, attending church, seeing my younger son’s play, making a zipline, camping out, cooking eggs over a fire and roasting marshmallows, hiking, looking at things under the microscope, card games, listened to Harry Potter on tape, making pizza and pickles, flashcard competitions, going for bike rides, playing with the neighbor kids and cousins — Blue Hole was his favorite. 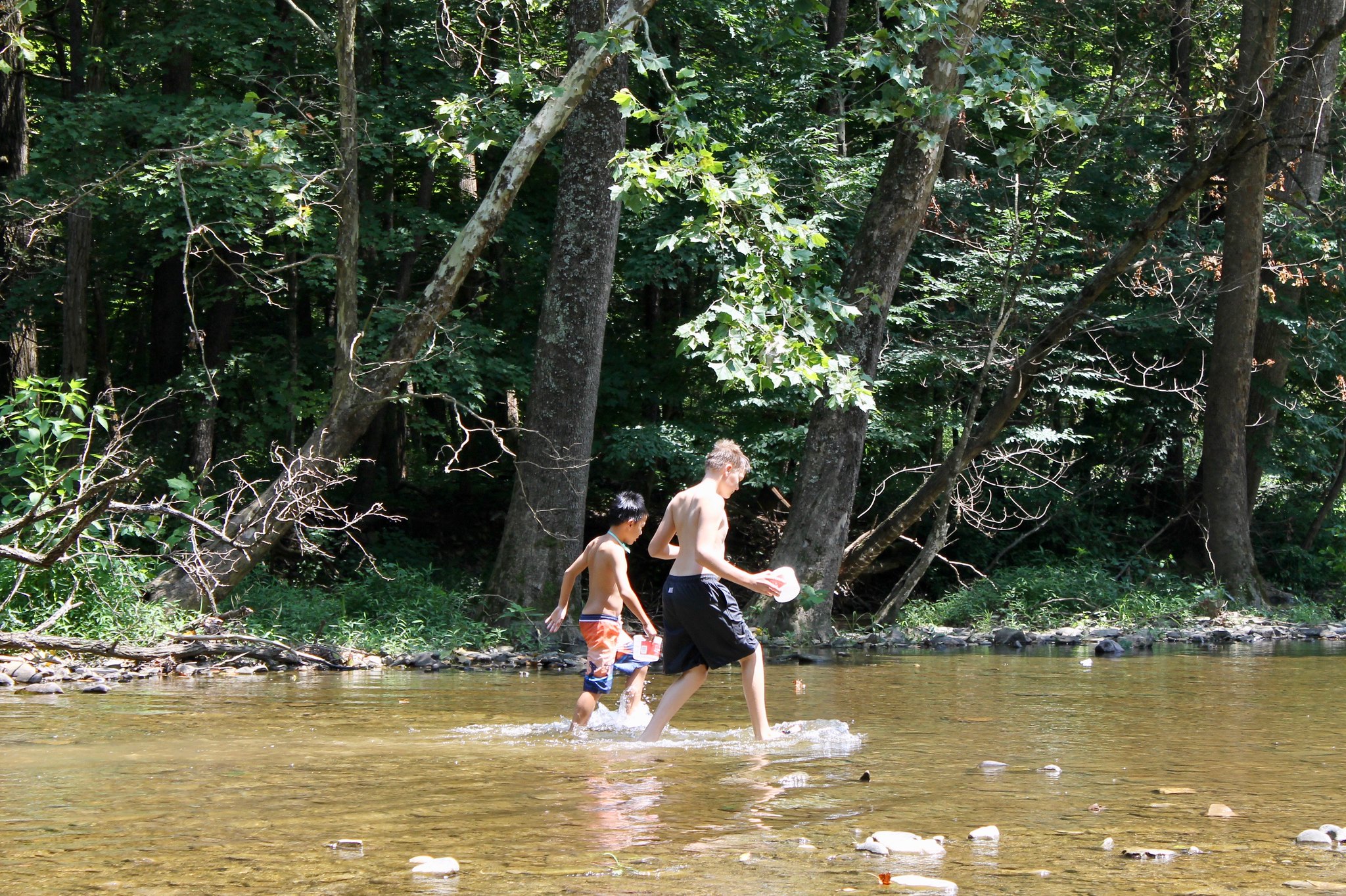 We went three times, which, according to him, wasn’t nearly enough. 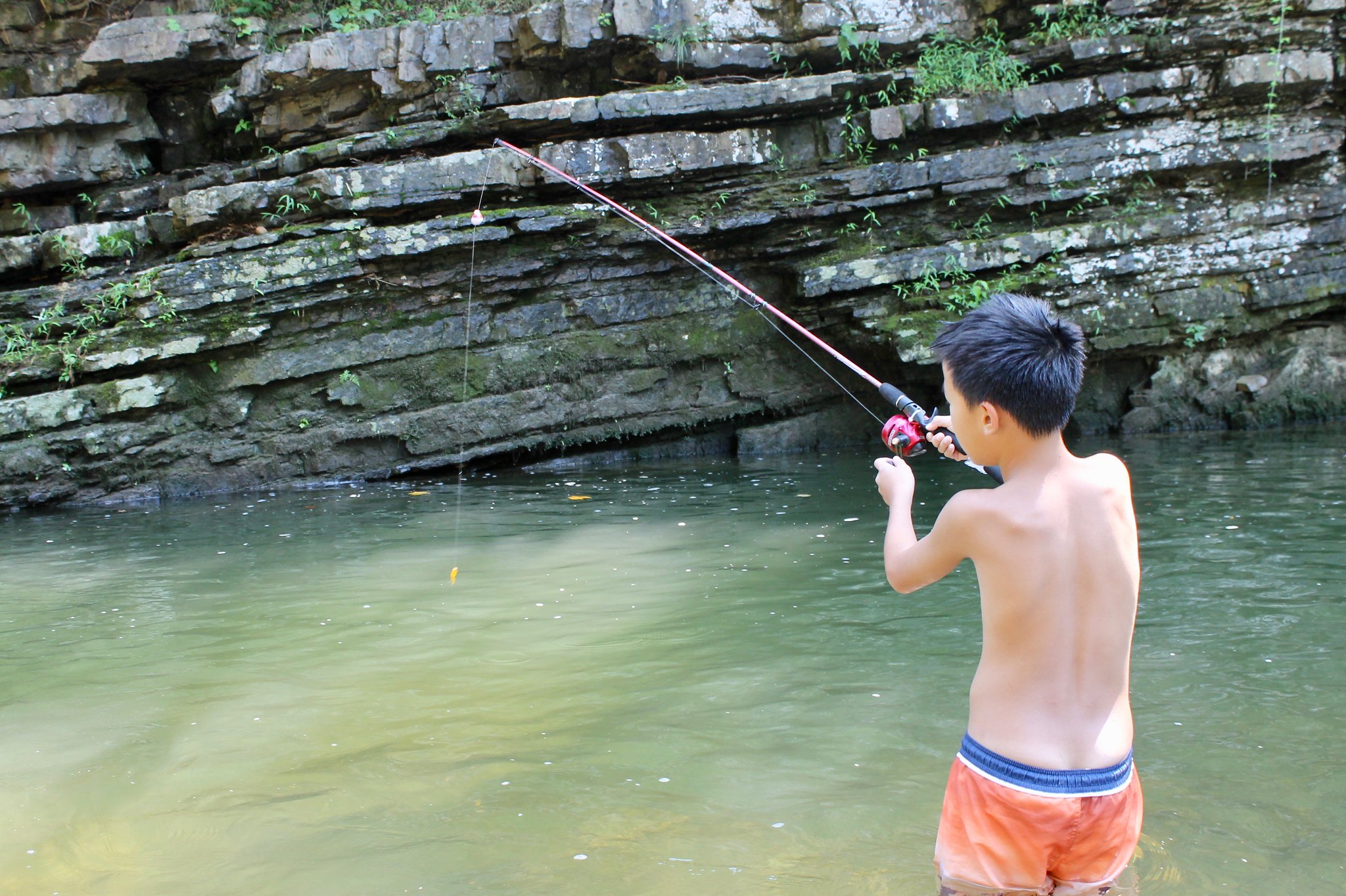 I think he could’ve spent his entire week there, his feet in the water and a fishing rod in his hand, and been perfectly content. 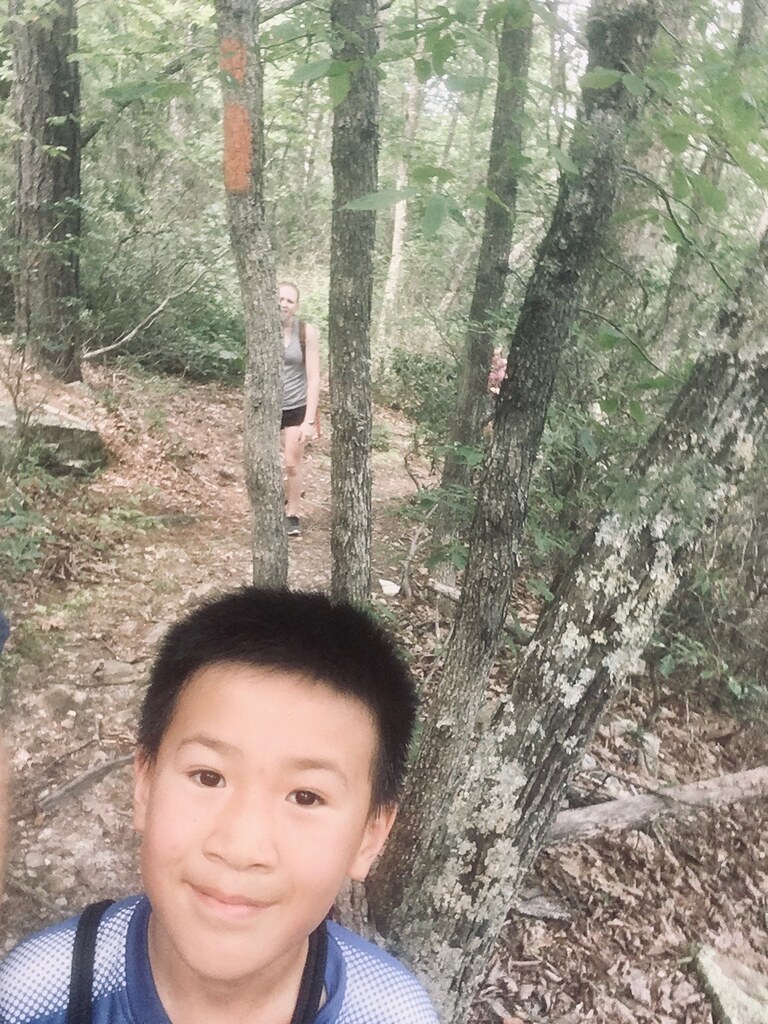 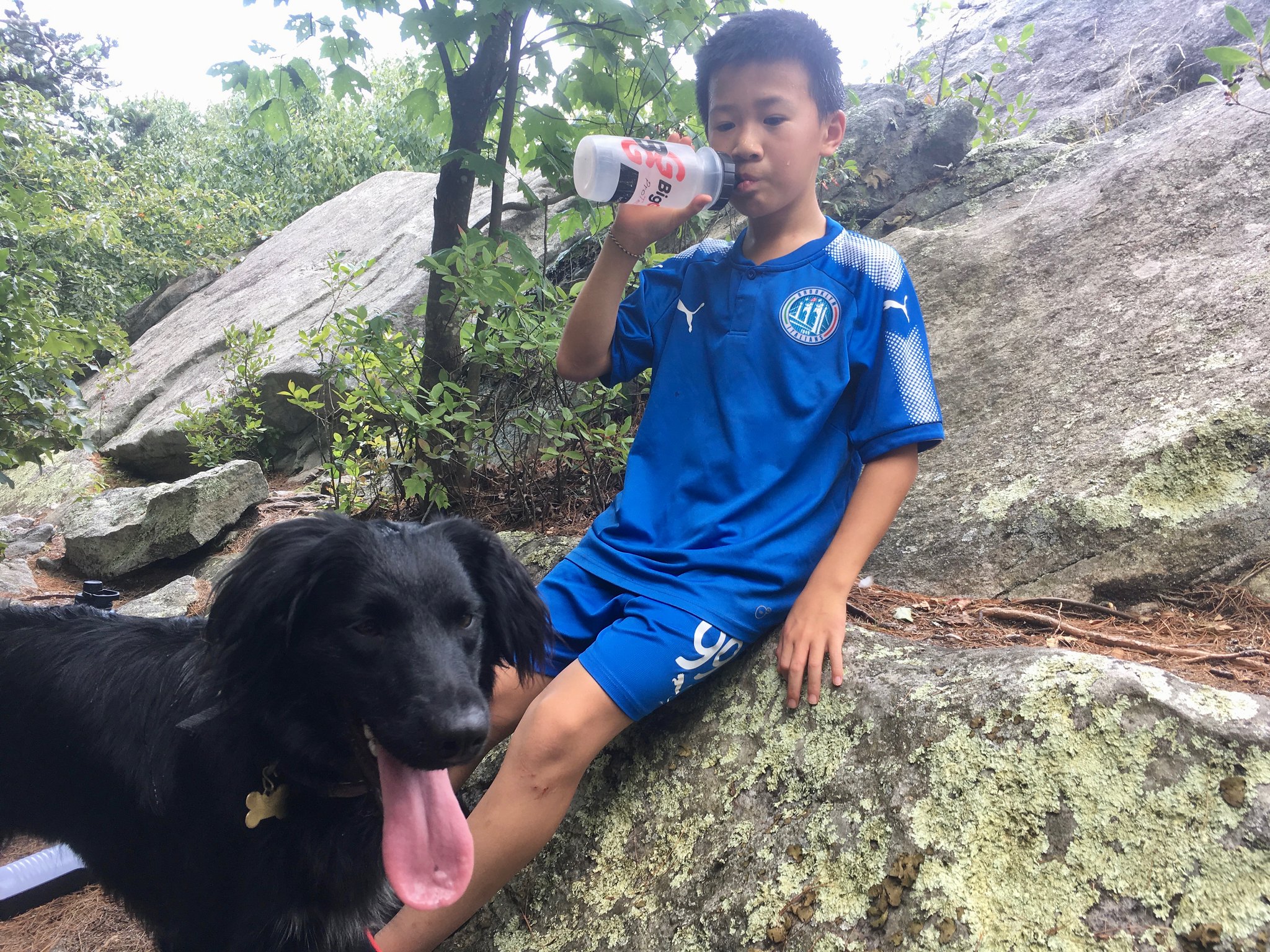 He suggested that they ought to start a Dirty Air Fund, though when I agreed and offered to send all my kids to stay with him, he backtracked right fast, ha! 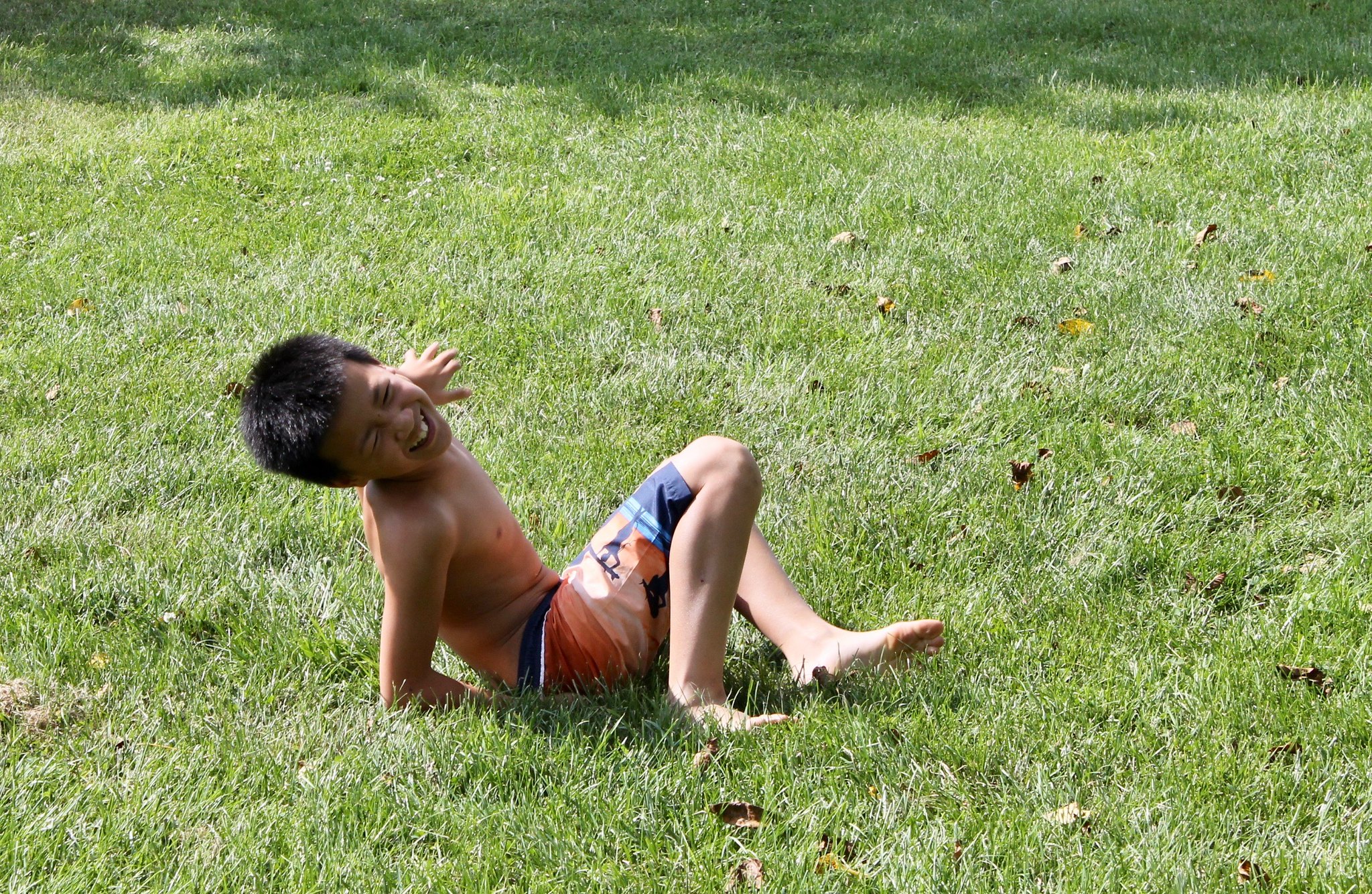 Also, after I gave the kids a pep talk about street safety before they went to the neighbors’, he popped his head back in the room to say politely, “Actually, I think I probably have more experience with busy roads than you guys do.” Touché!

The last night, a bunch of Fresh Air host families gathered at one of the host homes for a potluck, waterslide, and tie-dye. 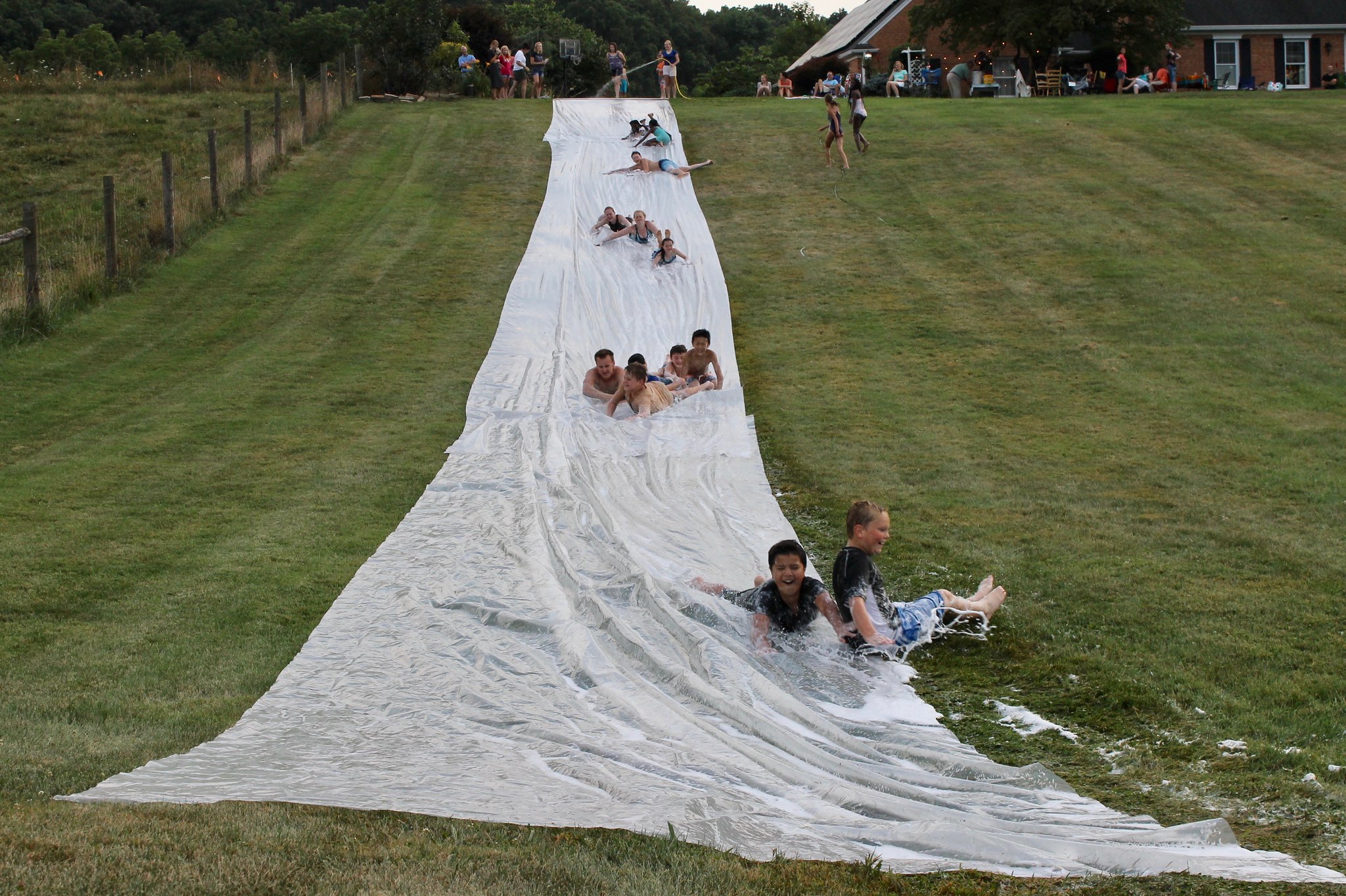 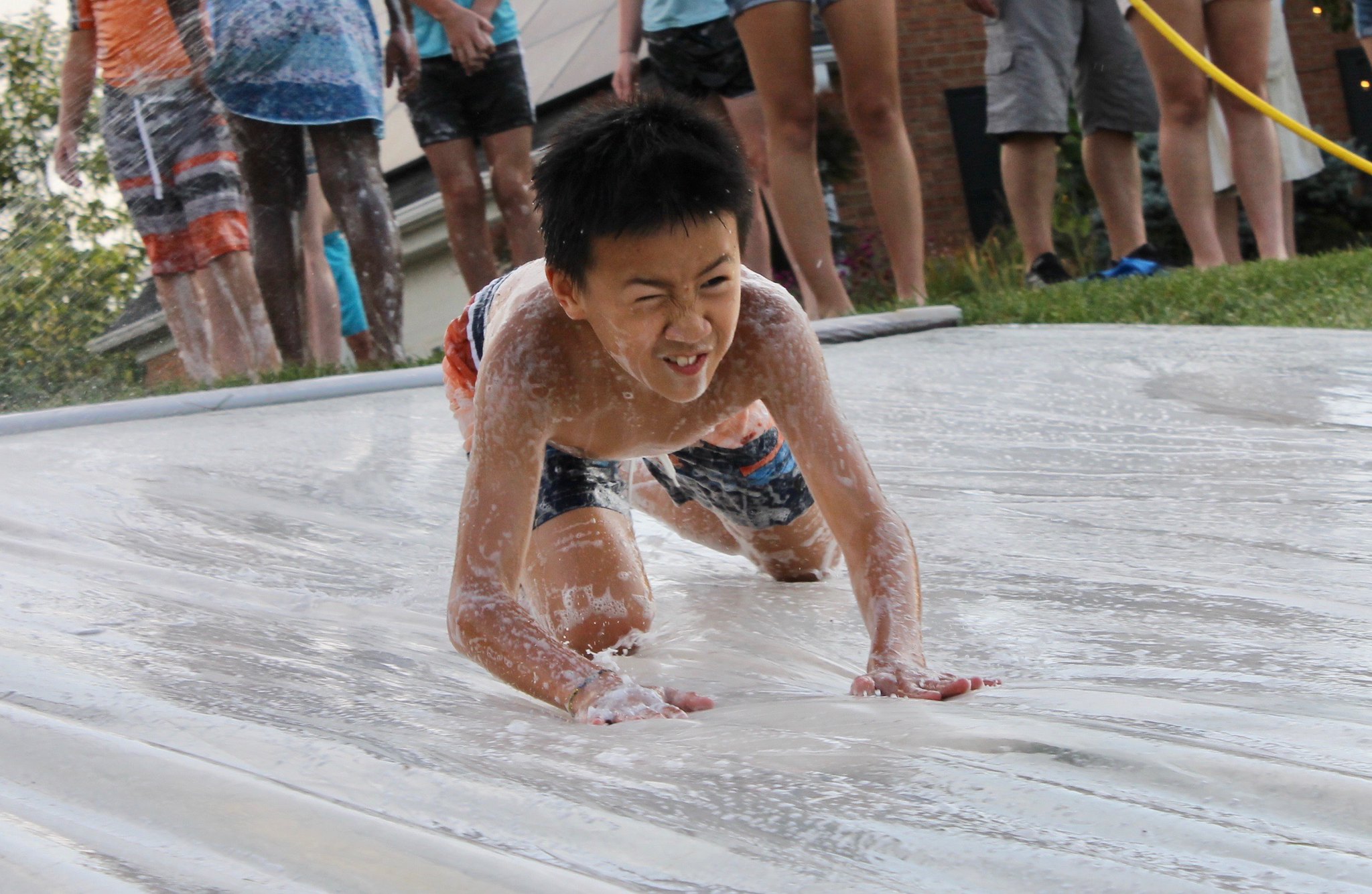 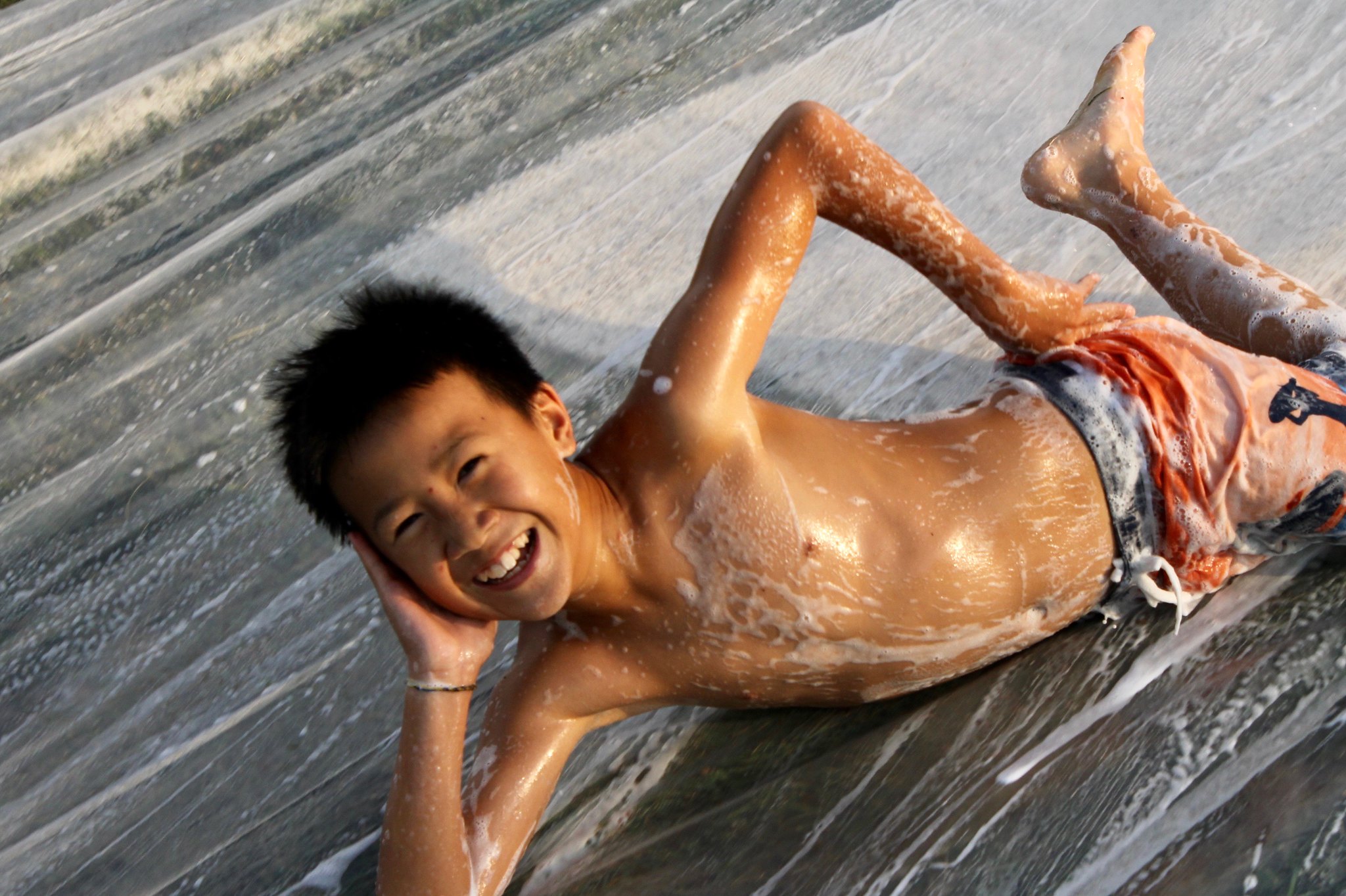 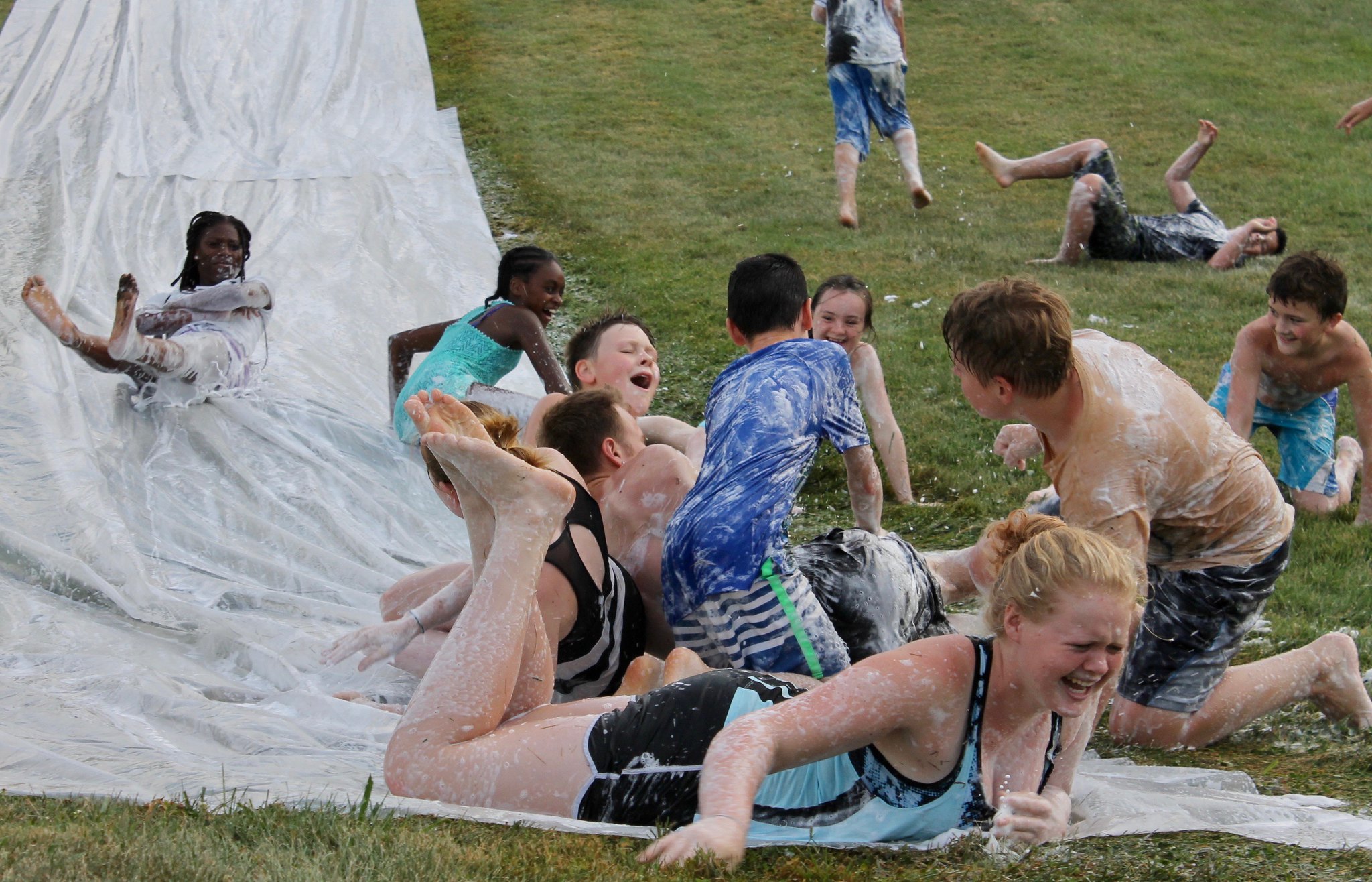 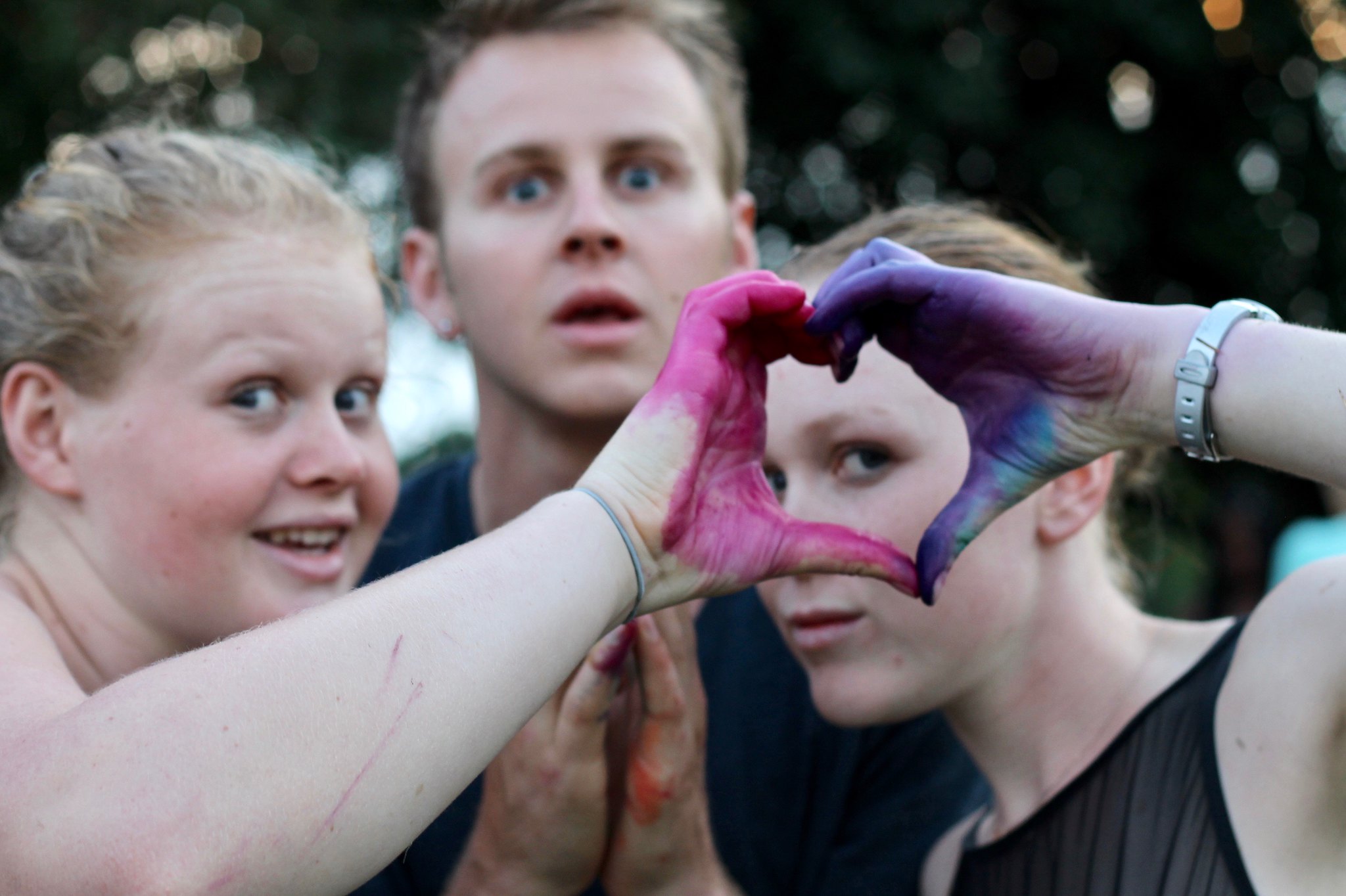 The evening was a smash-hit — the perfect way to end the week. 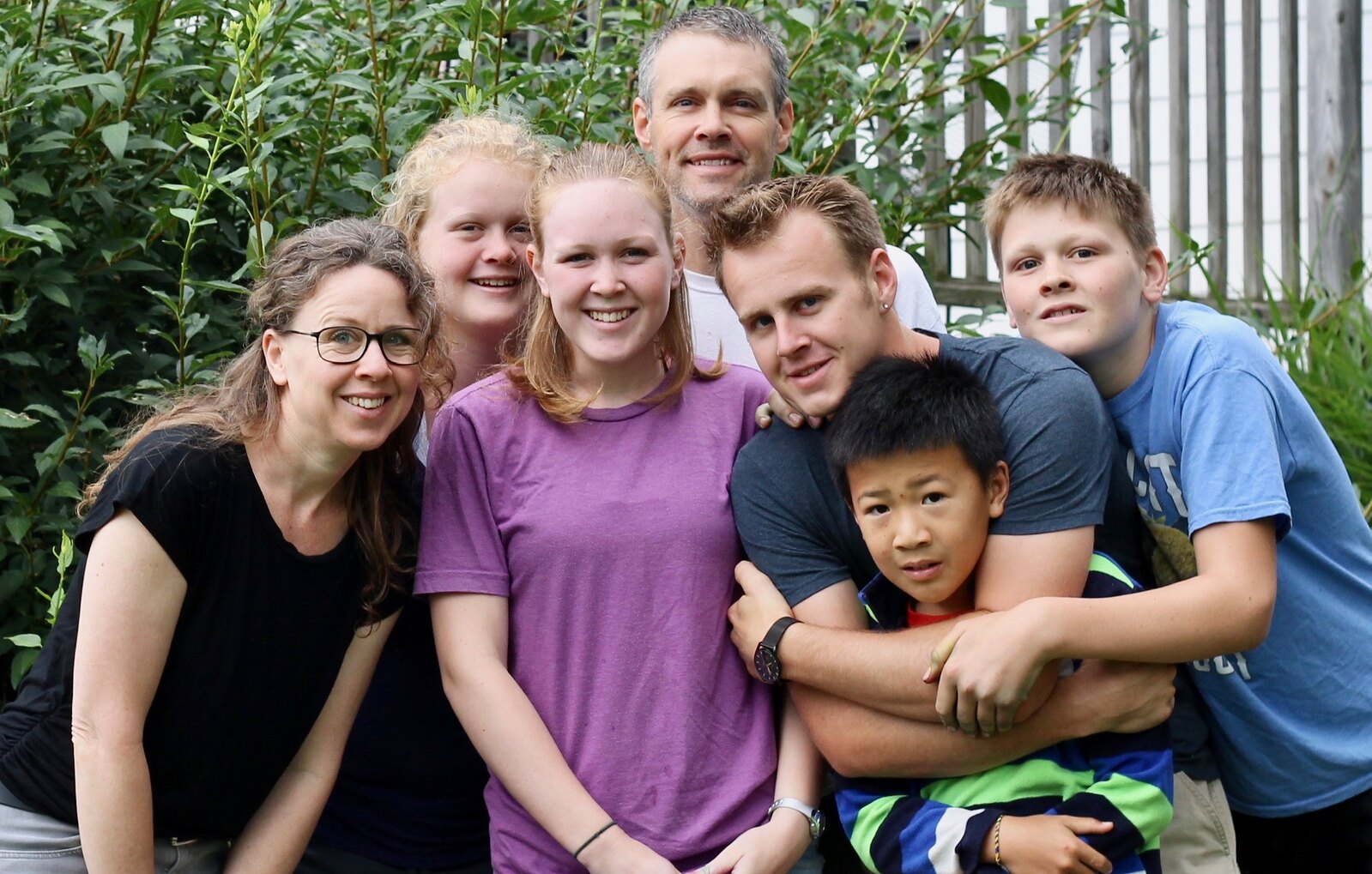