The highlight of making those dragon eggs — aside from 1) the thrill of creating, and 2) her reaction — was the Italian Meringue Buttercream. I’d made it several times before but this was the first time I got it right. 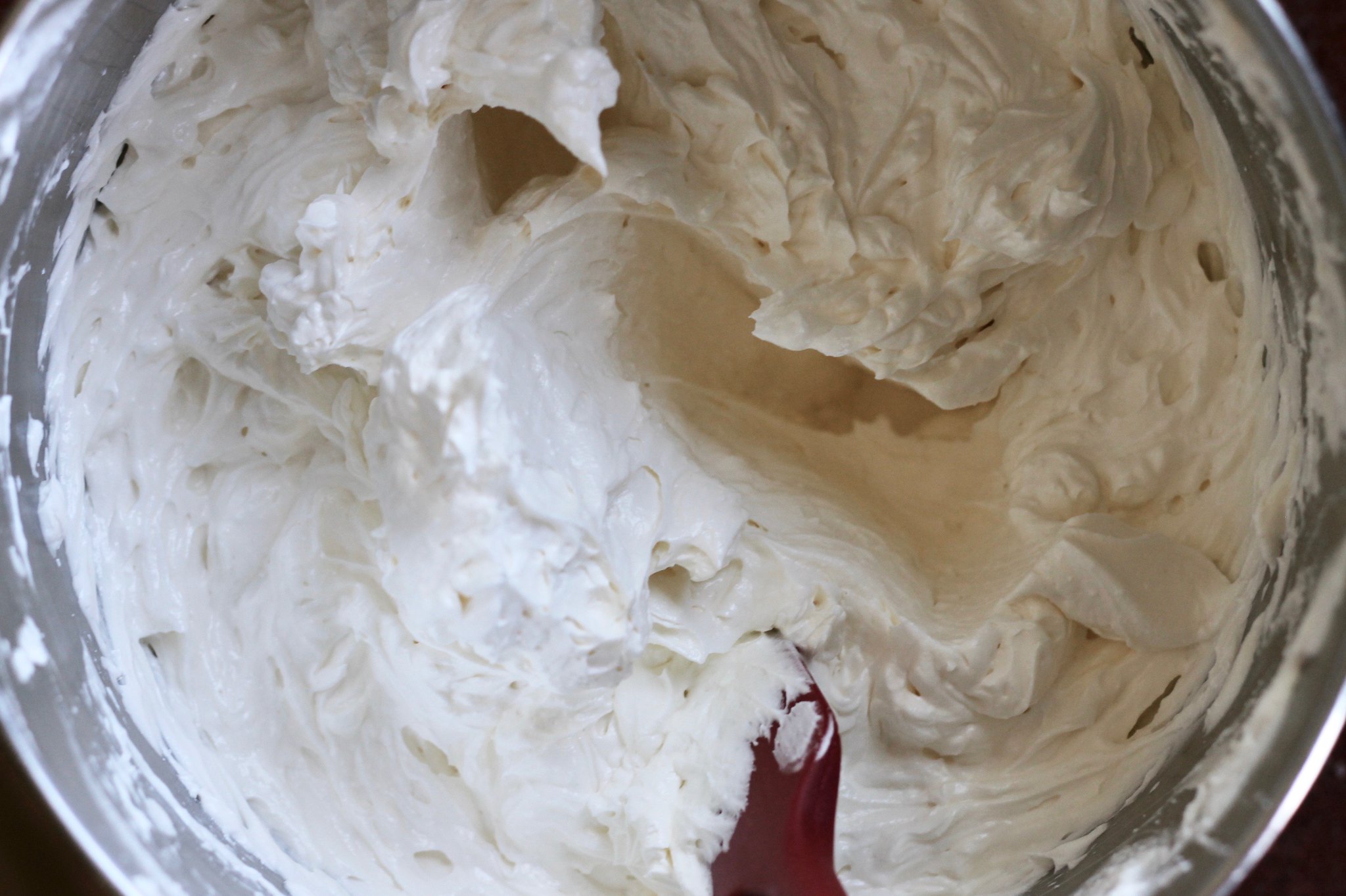 I’m not an icing sort of person (I always thought that frosting-shot trend was just plain weird), but now I think I understand. Buttercream, the real stuff, is not too sweet, and the texture — both impossibly fluffy light and creamy rich — is a marvel. I worked with that lusciousness all day, dirty icing the cakes and then giving them a second coat (and then one more, just to be sure they were sufficiently sealed), and at the end of the day, instead of feeling sick from the buttercream, I actually craved it. I had a little leftover in the fridge, and every now and then I’d sneak some.

So what’s the trick to getting a good buttercream? Temperature! Everyone always said the proper temp was important, and it turns out they’re right (imagine that). Probably, when I’d made buttercream before my butter wasn’t sufficiently soft, or I didn’t take the time to cool the meringue and hot-syrup mixture all the way to room temp. 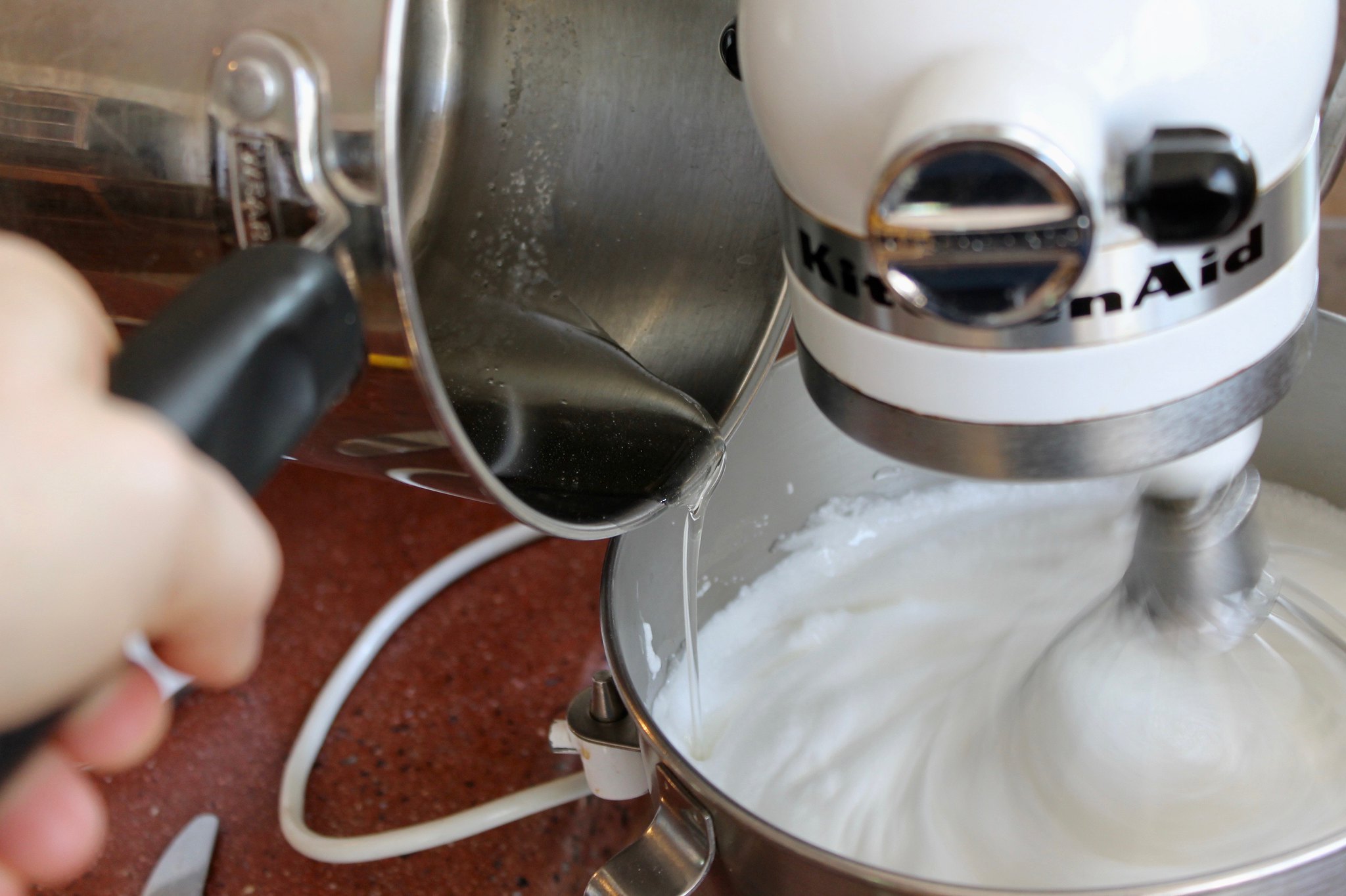 This time around, I beat the syrup and meringue mixture for the full twelve minutes and then, since the bowl still felt warm, I wrapped the outside of the mixing bowl with a cool cloth. Then to chill it even faster, my husband suggested I hold a bowl of ice water up against the bottom of the mixing bowl. Worked like a charm! 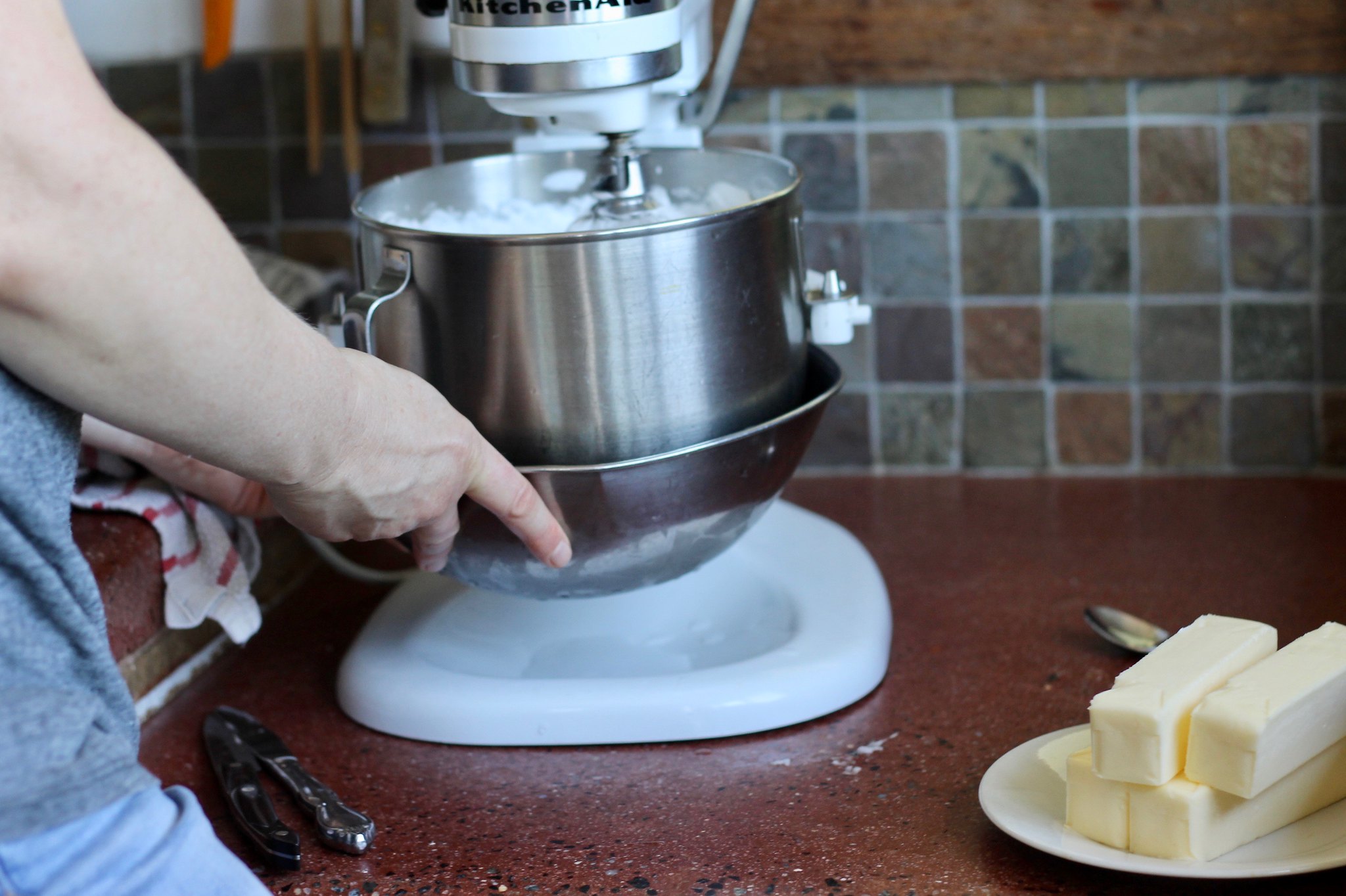 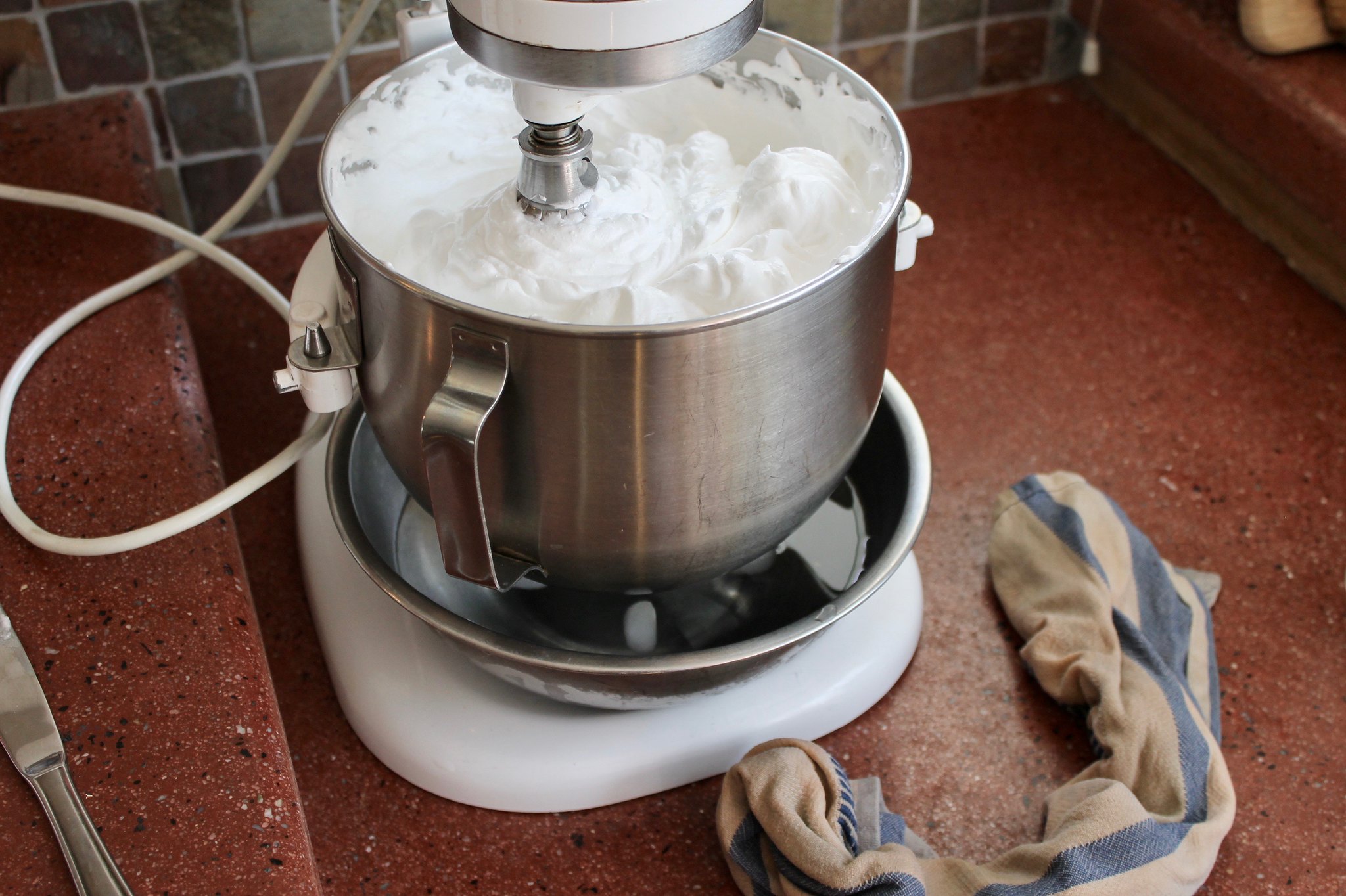 Also, since it was such a warm day, my butter was almost completely soft. It incorporated quickly into the meringue and then, three minutes more of beating and — FROSTING!!!! 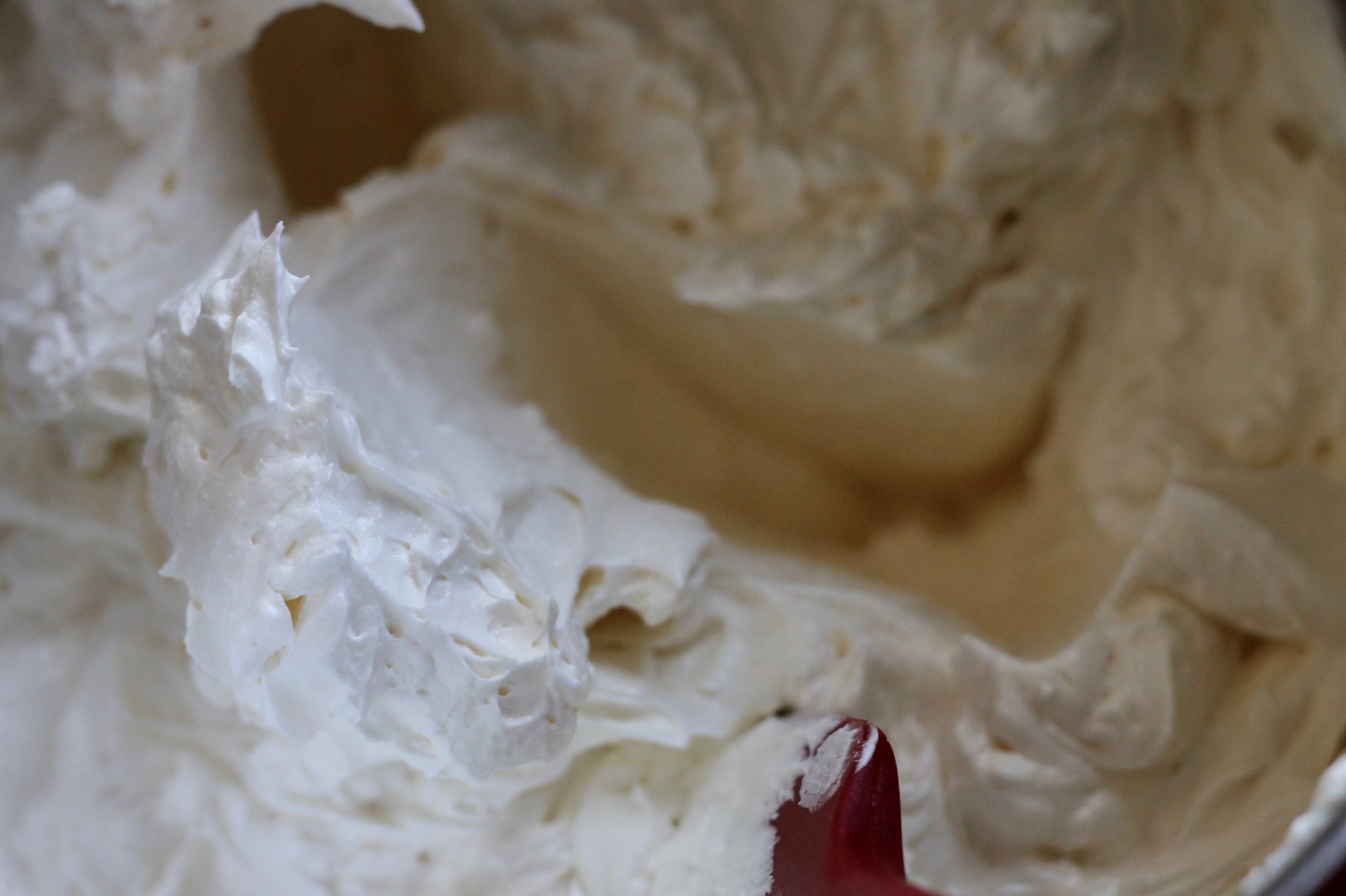 A couple days ago I made another batch of buttercream, just to play. I tried to chill it faster, and heated the syrup a little more, etc, and consequently (maybe?), had a few minor problems. 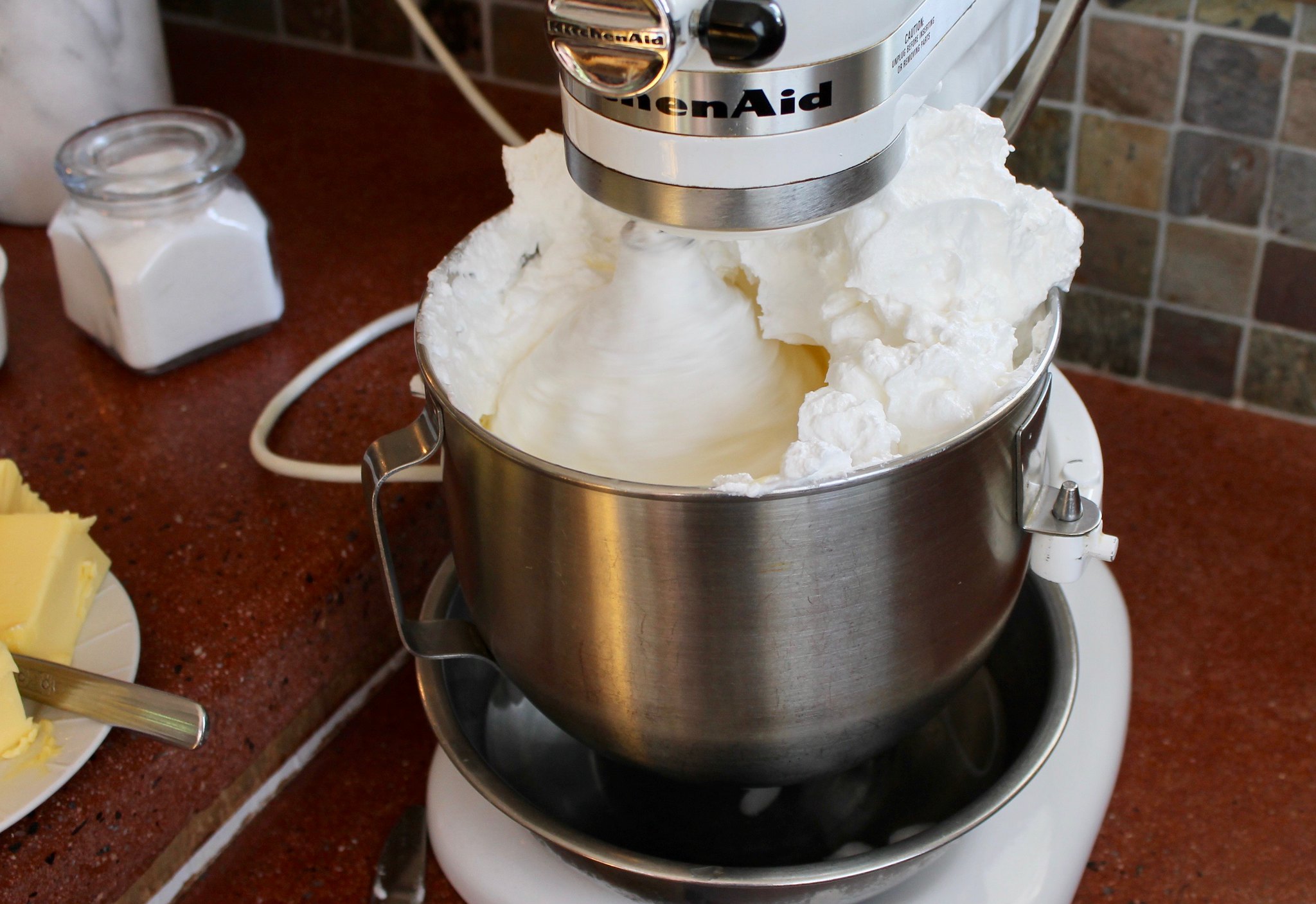 After 12 minutes of beating, the whites sprang up super high, perhaps a sign they were overbeaten. 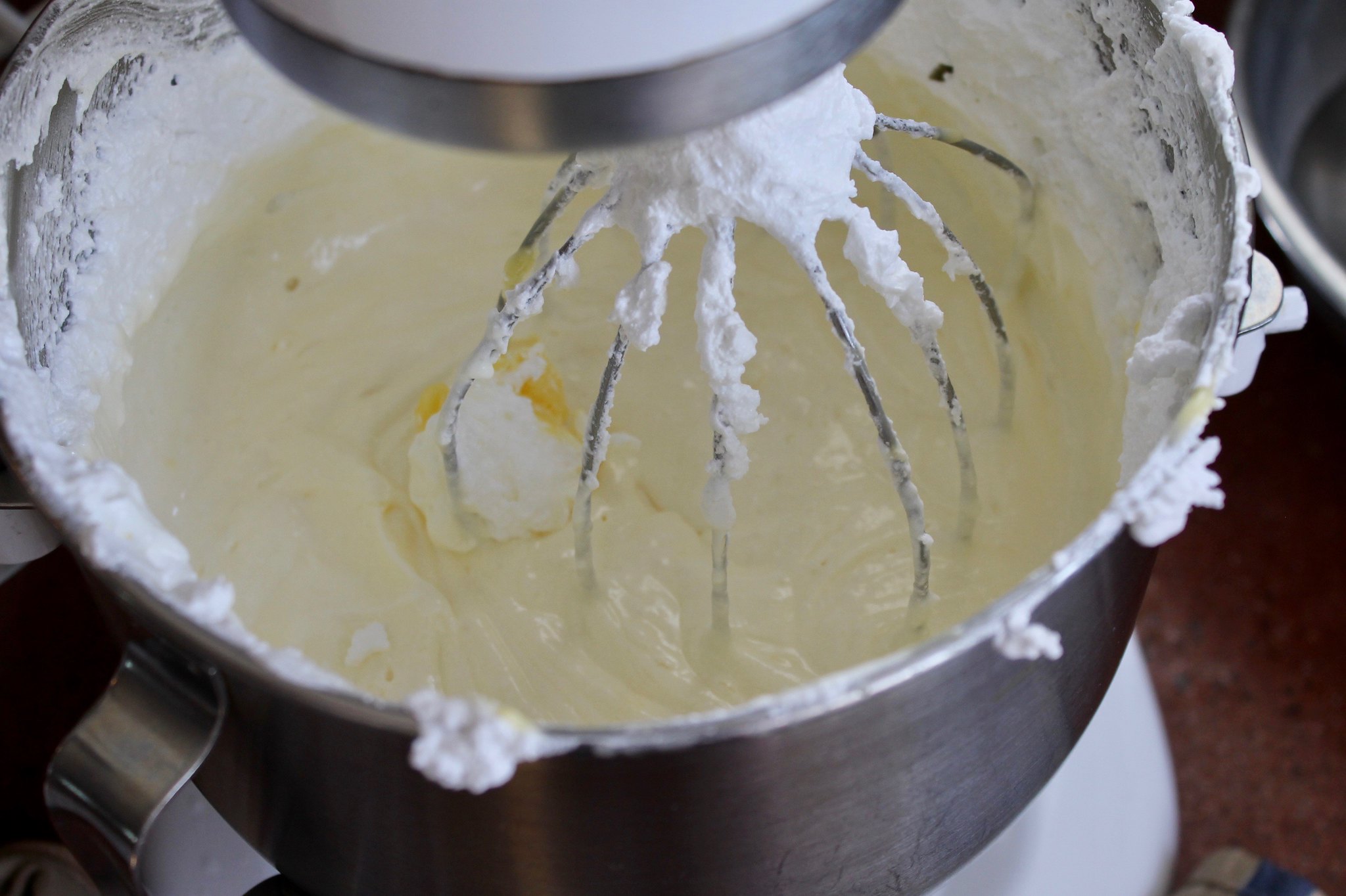 With the addition of butter, turning soupy (this is normal). 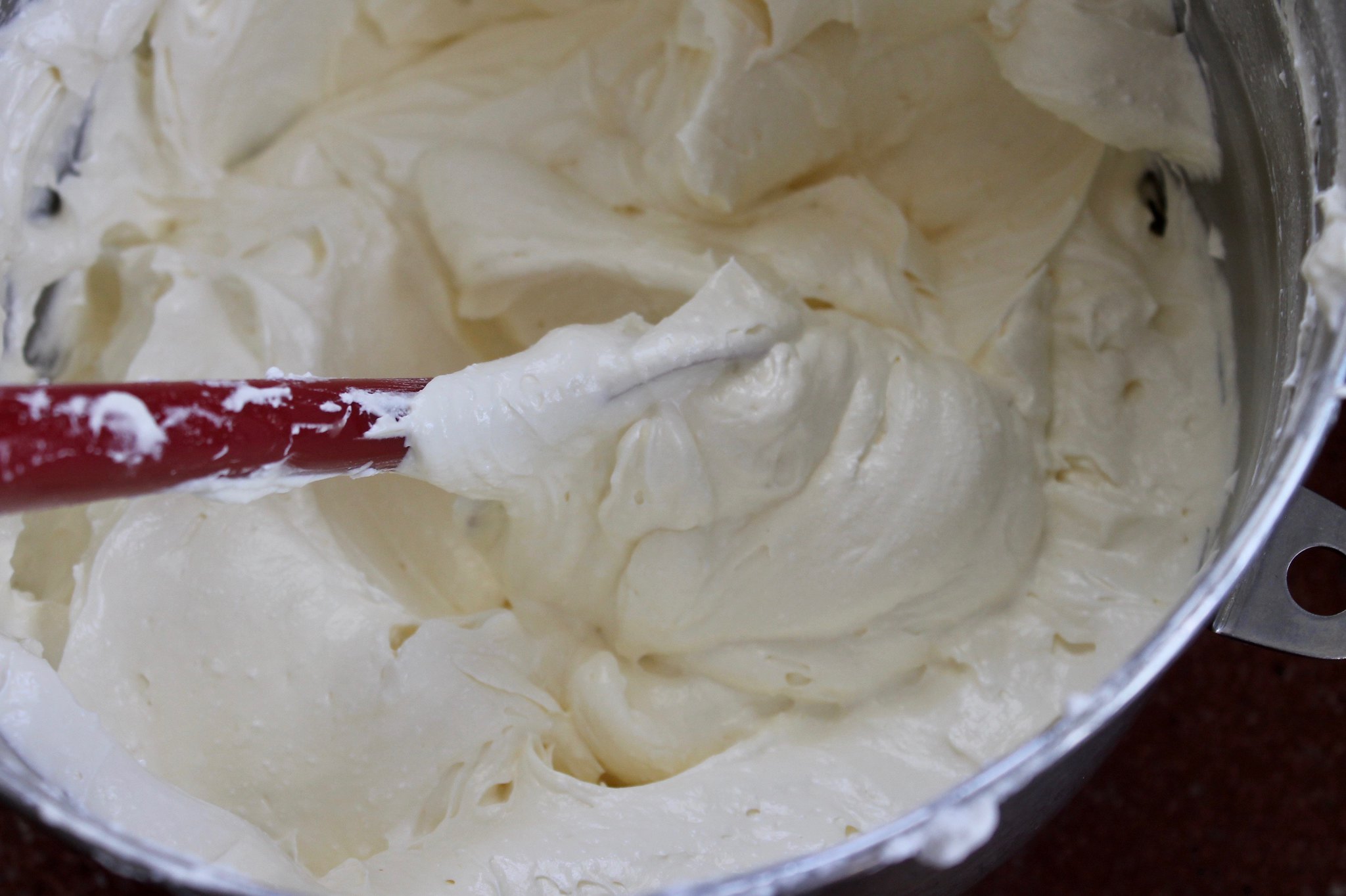 And then it came together! (Though it was a softer mix than the other time.)

It had a bit of trouble getting as light and fluffy, and I read somewhere that that might be because I overwhipped the whites? Also, we’re in the middle of a heatwave, so that may have played into it some.)

I flavored some of the icing — along with the vanilla, some orange marmalade and chocolate — and then chilled them down till they were hard so I could re-beat them, making the frosting break and reincorporate, just to get a feel for it. 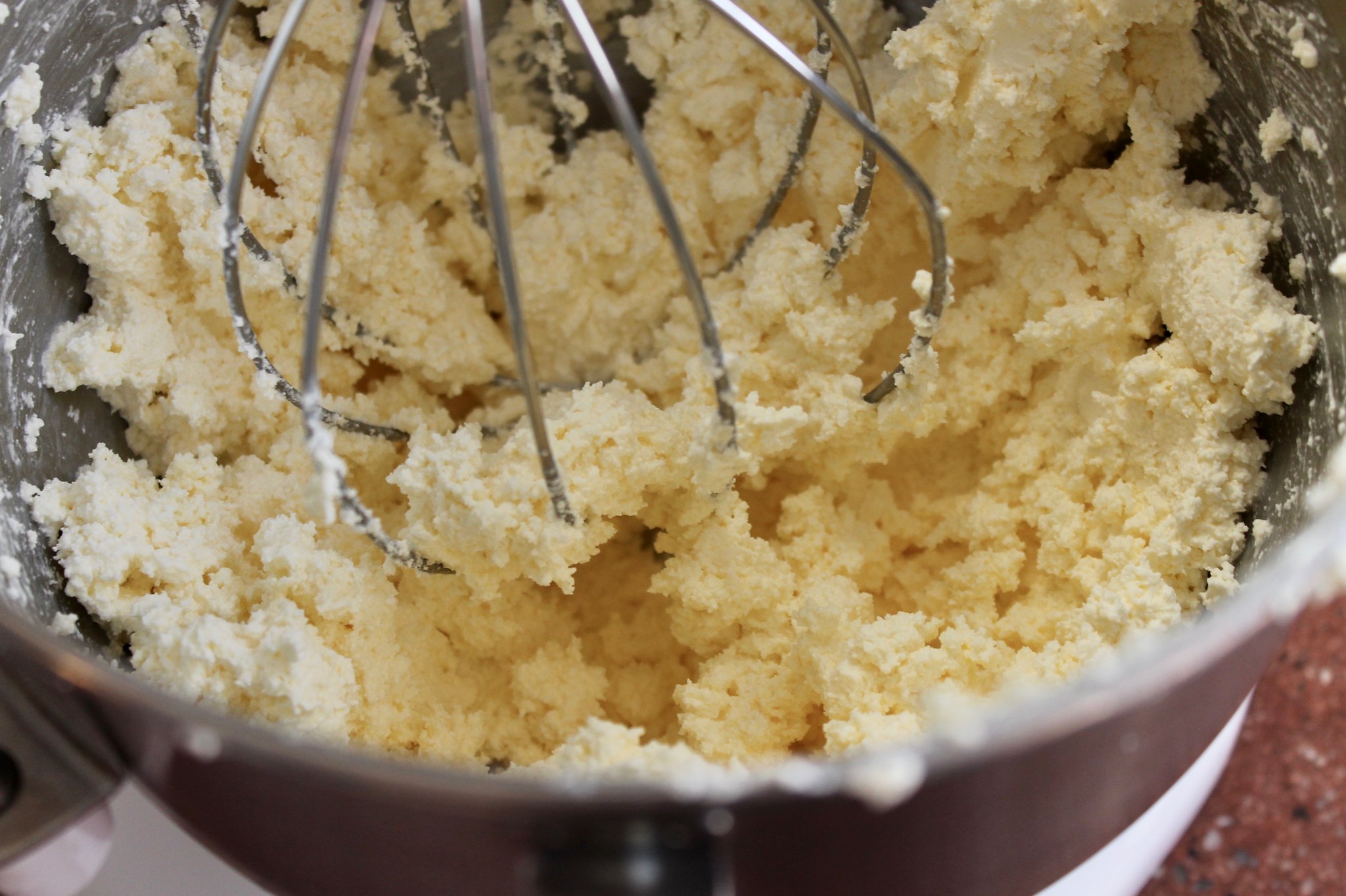 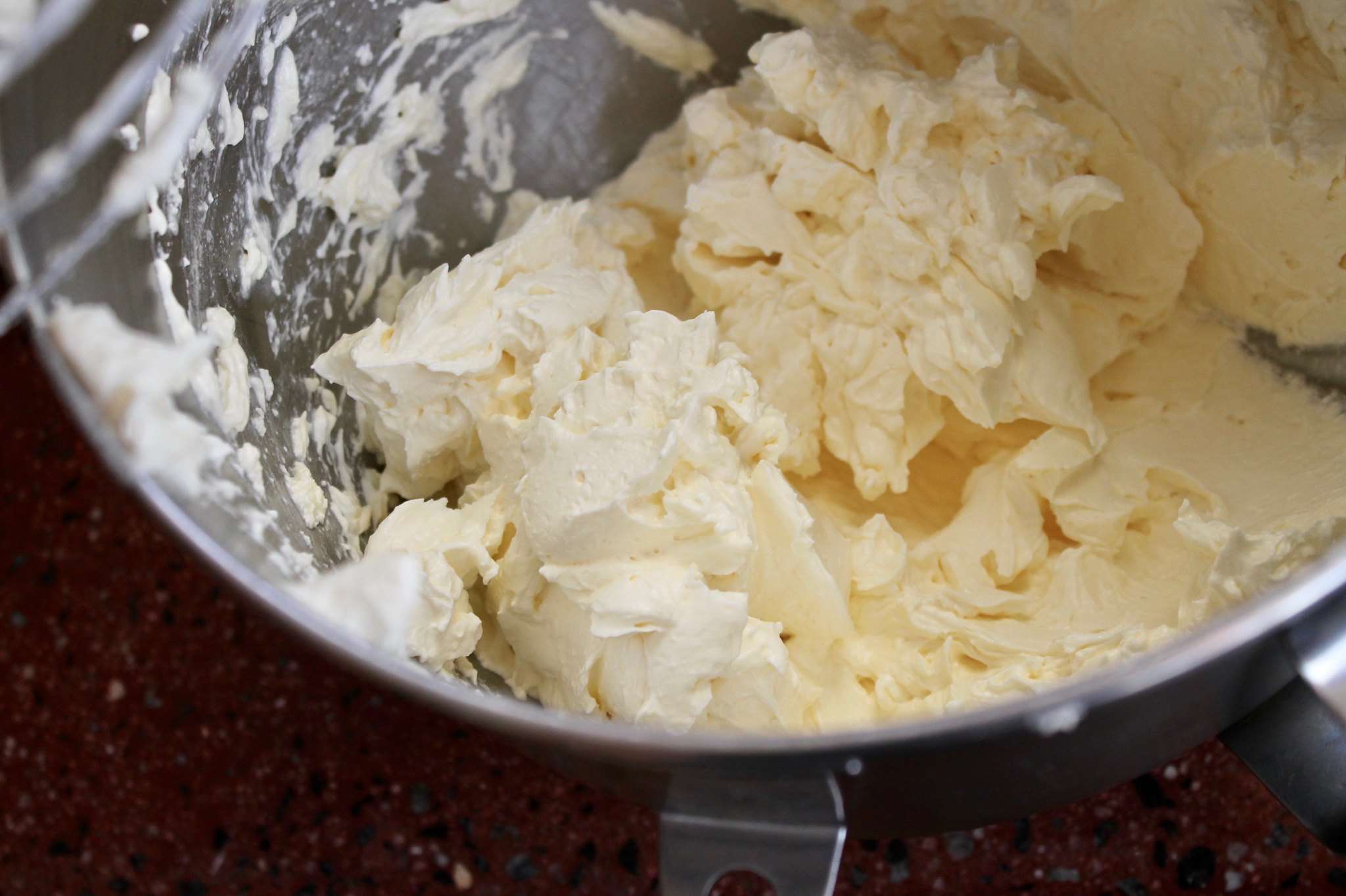 In other words, I’ve still got a ways to go, but I’m well on my way. 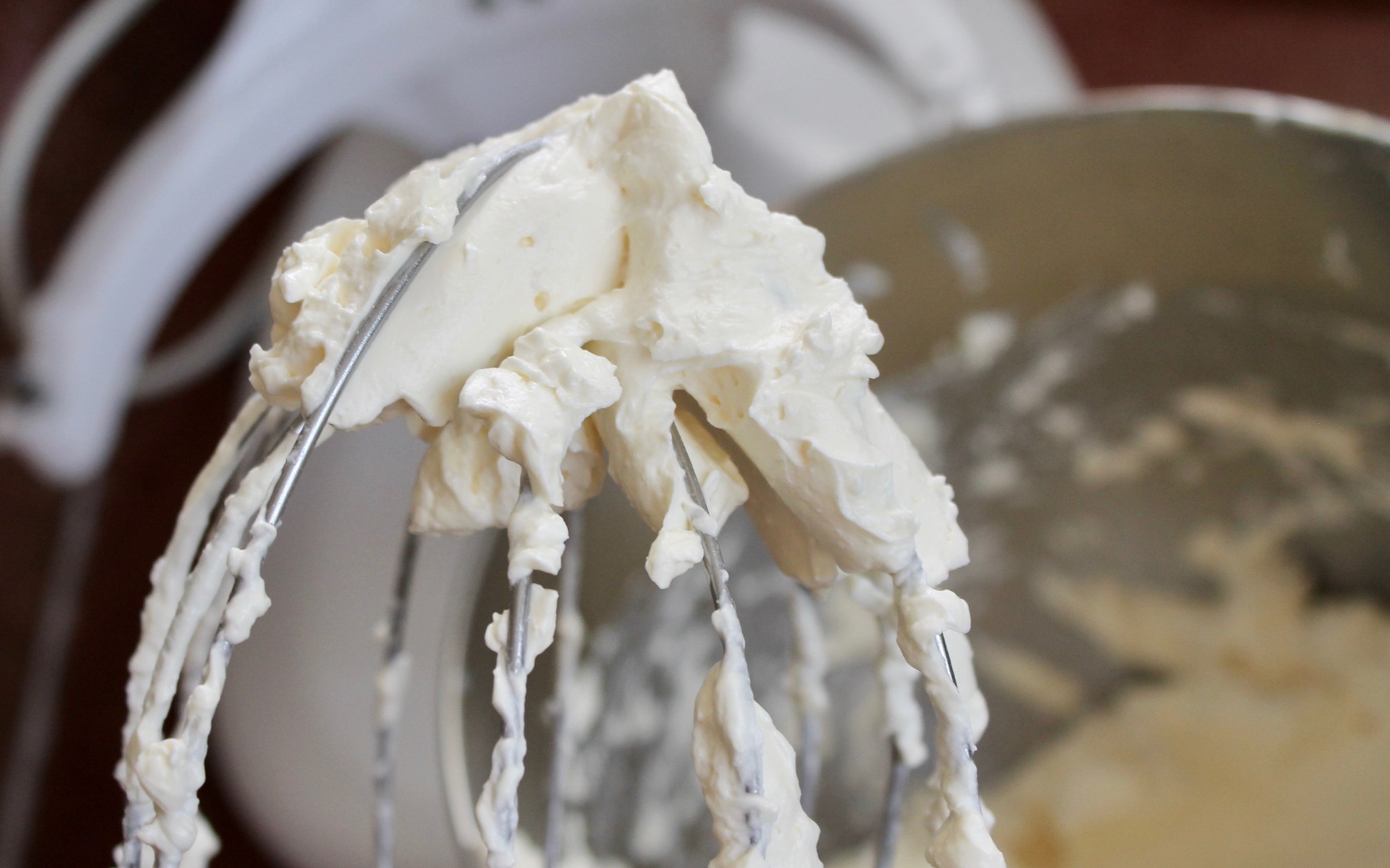 *All the recipes I’ve read say to use unsalted butter. I used salted and it was fine, but maybe it would be better with unsalted?
*Do not stir chilled (or frozen) buttercream! Wait until it completely comes to room temp; otherwise, it will curdle and separate. If it does, though, just keep beating (applying hot or cold compresses, depending on the room’s temperature, to the outside of the bowl). It will come back together.
*They say that buttercream is an ideal base for other flavors and colors. Play!
*With the leftover egg yolks, make chocolate cream pie. (It calls for 6 yolks, but a couple extra don’t hurt.)
*What with all the whipping, you’ll probably want a stand mixer.

Put the sugar and water in a medium-sized saucepan, attach a candy thermometer to the side, and bring to a boil. Once the syrup reaches 230 degrees, start whipping the egg whites until stiff peaks form. Do not overwhip; if peaks form before the syrup is ready, reduce the mixer speed to the lowest setting, just to keep them moving.

When the syrup reaches 240 degrees (though I’ve seen some recipes that say anywhere from 235 to 248 degrees, so I think there’s some wiggle room?), take it off the heat. Pouring carefully, with the mixer on low speed, incorporate the hot syrup into the egg whites.

Increase the speed to high and beat for 8-12 minutes until the outside of the bowl is room temperature. (After about 8 minutes, you can start applying cool compresses to the outside of the mixing bowl to speed the chilling process.)

Once the meringue mixture is cooled to room temp, add the butter a couple tablespoons at a time, waiting until each chunk is incorporated before adding more. The mixture will loosen, becoming slightly soupy. Add the vanilla, increase the speed, and beat for another three minutes, or until it’s whipped up into a glorious, luscious, creamy frosting.

This same time, years previous: last night, et cetera, such a hoot, sweet sixteen, in the kitchen, on his own, the quotidian (7.21.14), roasted beet salad with cumin and mint, how to beat the heat, picklehead, zucchini-Parmesan frittata.