In a new (old) cookbook I picked up from our thrift store, I discovered a couple recipes that called for Anaheim peppers. In one recipe the Anaheims were stuffed with cheese, and in another they were used to line the bottom of a pie pan and then covered with a custard of eggs, milk, and cheese and baked. In both cases, the final product was to be eaten wrapped in corn tortillas.

Unfortunately, neither of my standard grocery stories carried Anaheim peppers so, on the way out of town one day, I swung by the Latino grocery. They didn’t have Anaheims either, but as I walked by the counter on my way out the door, the shop owner stopped me.

“Is there anything I can help you with?”

“Similar,” she said. “But poblanos are shorter, slightly spicier, and their skin is a little thicker. What did you want them for?” And just like that we were deep in conversation about chiles and cheese. When I finally left the store, I carried a bag of poblanos (and a bunch of cilantro, just in case).

Back home, I prepared the chiles, half following the cookbook recipe and half drawing on what the shopkeeper had told me. 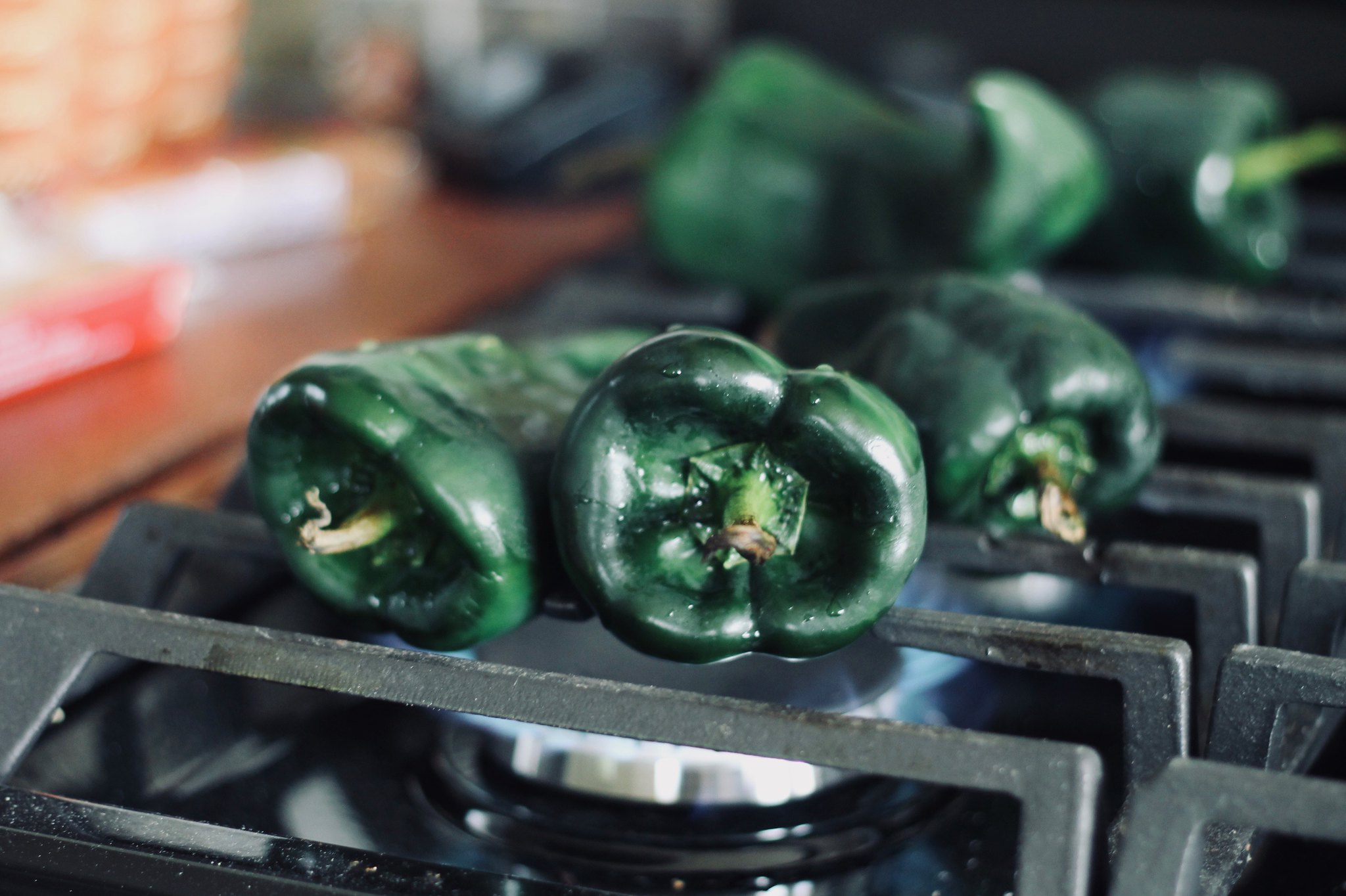 I toasted the chiles over the gas burner flame (this makes the entire kitchen smell like you’ve magically been transported to Mexico), before scraping off the blackened skin and slitting their sides so I could remove the seeds and membranes before stuffing each chile with lots of grated Monterey Jack cheese and minced onion. (I was afraid the onion would be too much, but the onions somehow added nuance while managing to stay super subtle — next time, I’m doubling them.) I fried the chiles over medium-low heat in a little bit of oil until they’d softened even more and the cheese was molten. (Actually, I think I only prepared one chile that first time, just to try it. But that one was so good that later — that same day? the next day? — I made all the rest of the chiles in one fell swoop.) 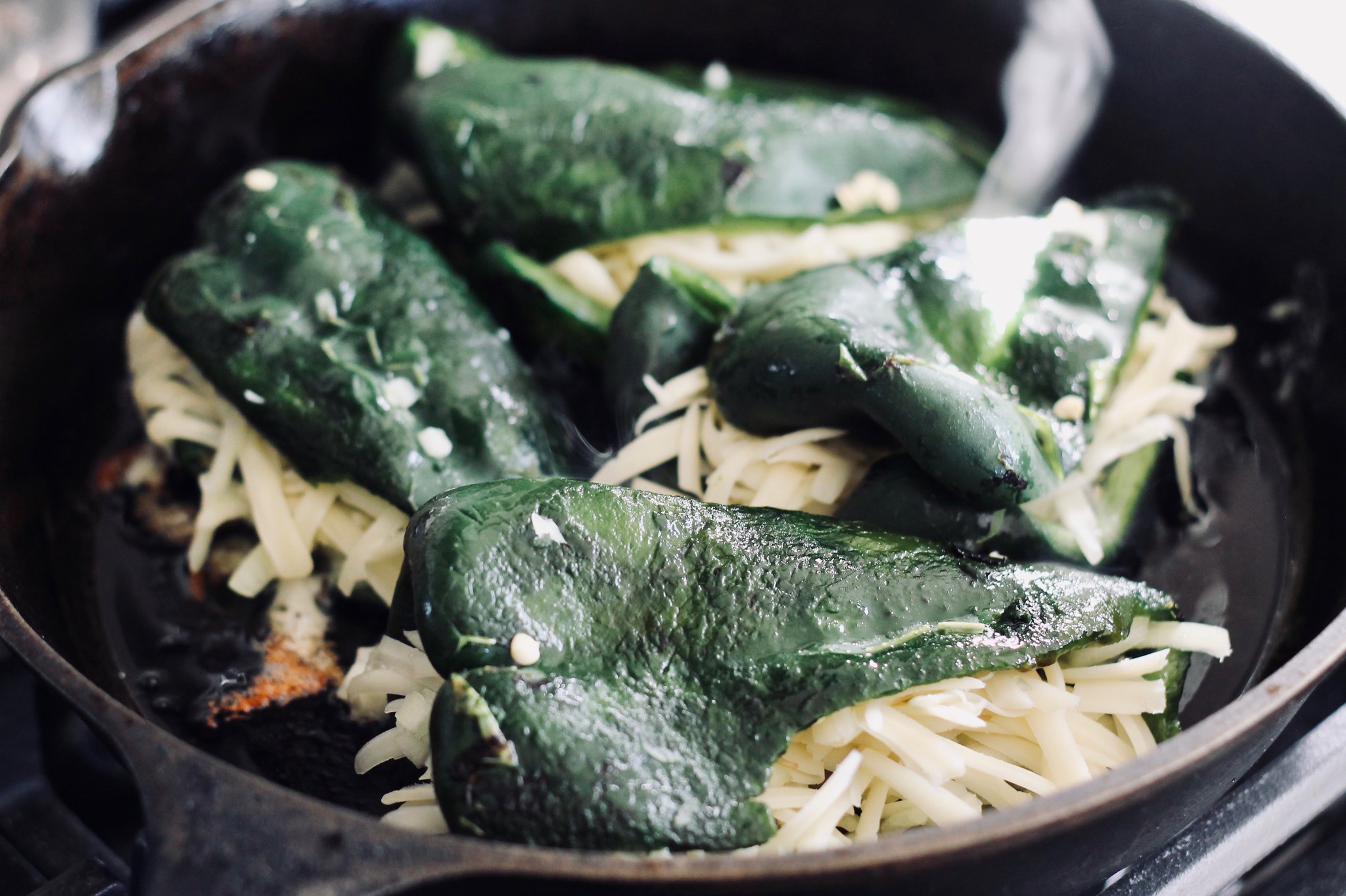 Because here’s the kicker: they go with everything! Stuffed in a tortilla, they make a fantastic quick lunch (salsa, sour cream, and extra cheese optional). They go great alongside a mountain of beans and rice. Other ideas: chop one up and stir it into a skillet of scrambled eggs, or the next time you’re grilling, add one of these to your burger, oo-la-la! 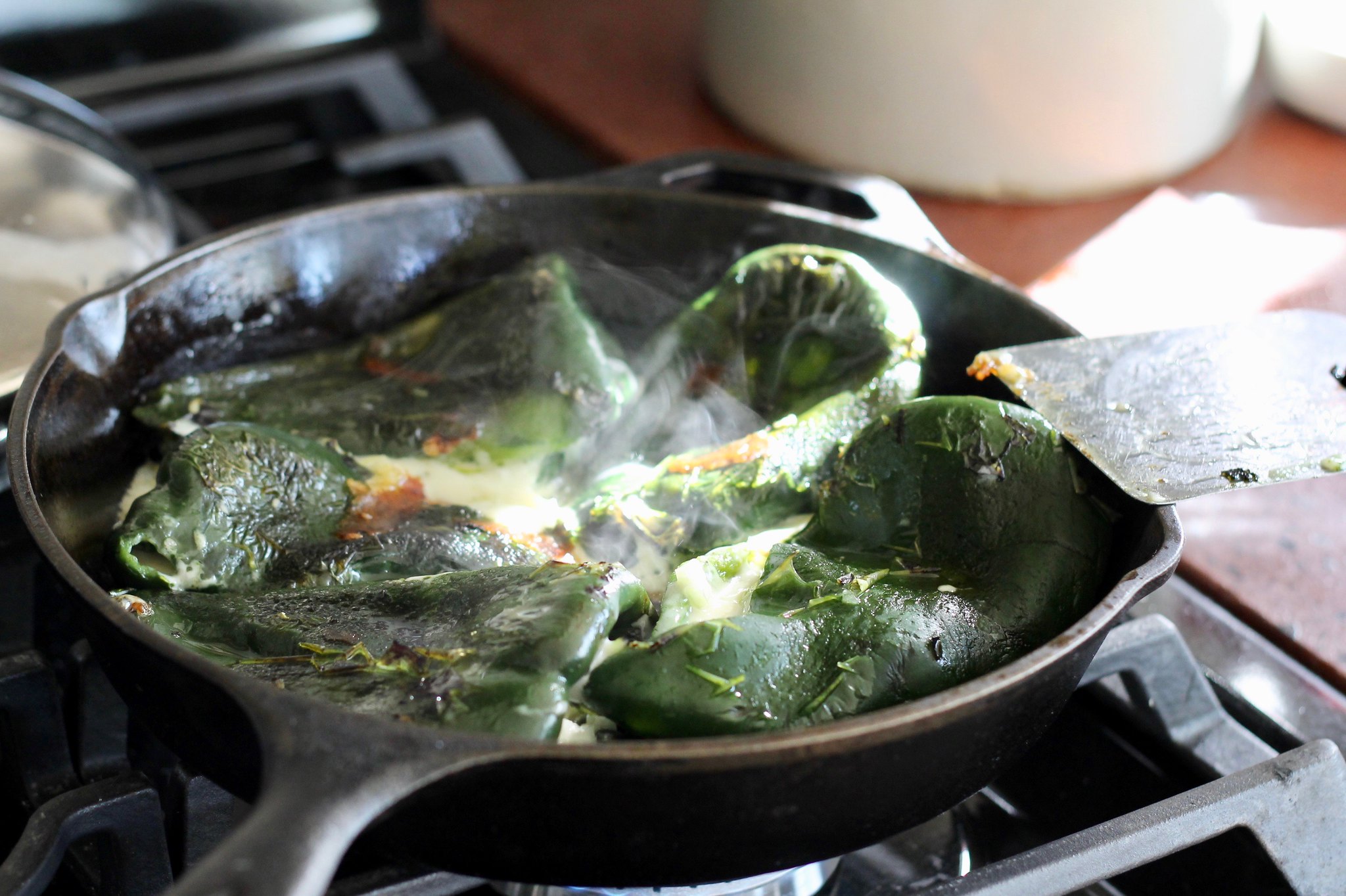 I’m running to town for groceries this afternoon and will be stocking up on all the ingredients for Latino-inspired meals — dry beans, avocados, limes (margaritas!), sour cream, cheese, and, of course, poblanos. 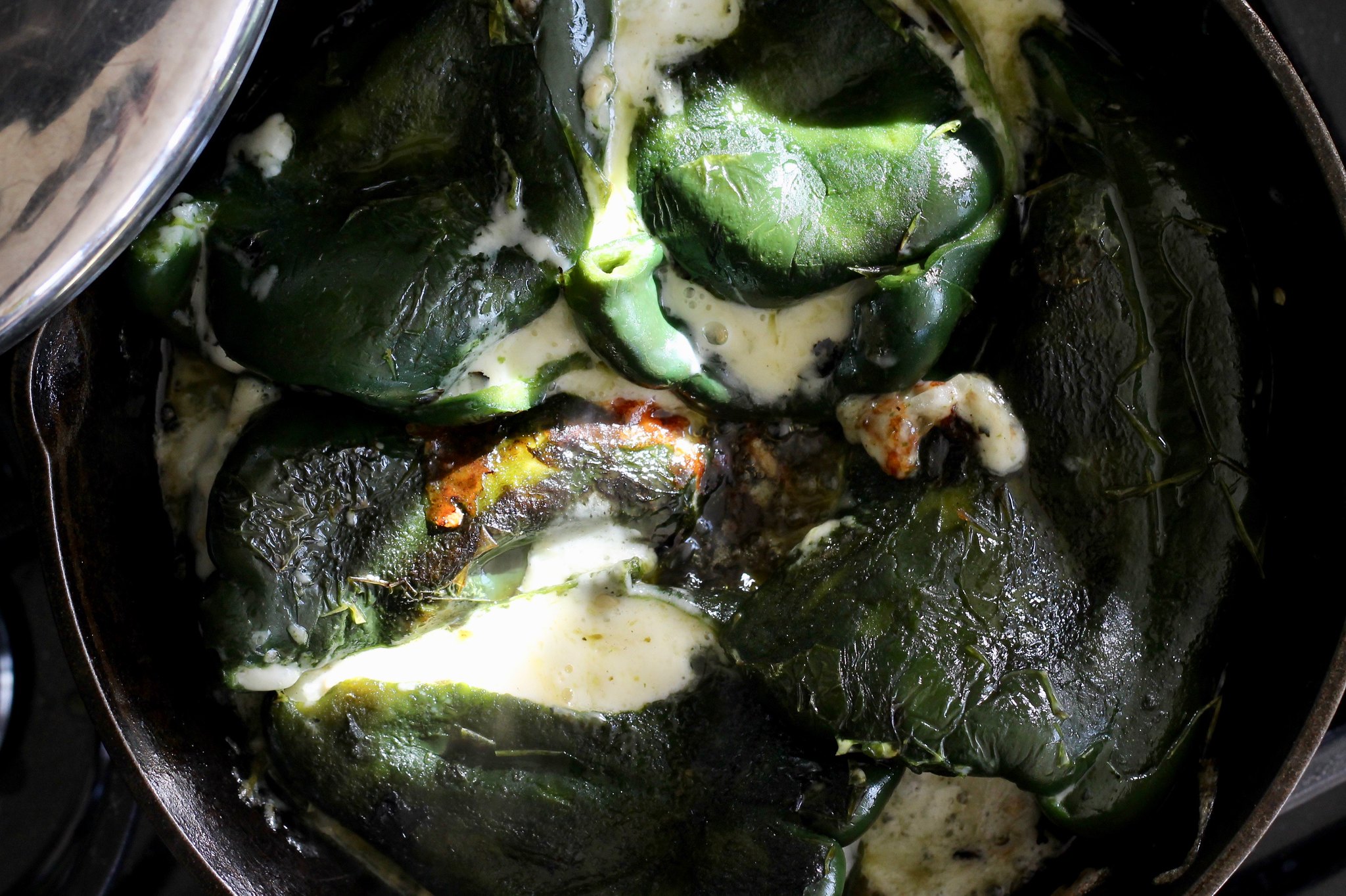 A batch of these and I’ll be set for a week.

Stuffed Poblanos
With inspiration from The Supper Book by Marion Cunningham.

Wash the poblanos and then blister the skins, either directly over a gas flame or under the broiler. Pop them in a plastic bag and let rest for 15 minutes before scraping off the blackened skin with a paring knife.

Cut the poblanos, lengthwise, down one side and remove the membranes and seeds. (If your poblanos are super mild, as mine were, you don’t need to be too picky about this part.). Tuck 1-2 tablespoons of onion into the chile and then stuff with lots of grated cheese. Repeat with the remaining chiles.

Lightly oil a skillet and slowly fry the chiles over medium heat until they’ve softened and the cheese is heated through, flipping once or twice. If you’d like, lid the skillet to trap steam and soften the chiles even more.

When the cheese bubbles out of the chiles (turning toasty-brown wherever it comes into contact with the skillet), they’re done.

Serve hot, with beans and rice. Or with eggs, on a burger, wrapped in a hot tortilla, whatever. Refrigerate leftovers for future meals.