This morning I made a pot of coffee for me, my husband, and our older son. But then my husband noticed that coffee was spilling all over the counter, none of it going in the pot. So he tossed the whole grainy mess, washed out the pot, fixed the do-hickey spout thing that our older son had put in backwards — SON! — and started again.

But, same thing. All the coffee ended up on the outside of the pot.

So he tossed that, too, and then we all blearily scrutinized the evil machine, trying to figure out how we were to get the coffee to go where it was supposed to. And then my husband figured out that another do-hickey (how many do-hickeys does one coffee pot need, pray tell?) was flipped up instead of down.

This time, though, instead of brewing yet another a pot of coffee right away, I insisted on running a half cup of water through, just to be sure everything went where it was supposed to go. It did, so then I made several more cups of water, just to be sure. And then my husband flipped because What? Still no coffee?

But I didn’t much care about his flipping because I’d already made my own cup with my aeropress and was happily sipping away while flipping the pancakes on my new stove.

That’s right, people. I have a new stove!

Remember that post where I asked you all for stove advice? You were great — so much useful advice! — and after reading all your comments and doing a bunch of research, I actually pretty much settled on the stove I was going to get. But then we decided to volunteer in Puerto Rico for a few months, and no income meant no purchases which meant, sob, no stove.

When we got back home, my rinky-dink borrowed, but still functional, electric stove of thirteen years began to throw me some curveballs. The oven door stopped closing all the way. The big burner occasionally refused to downshift out of high gear. One of the small burners tipped violently so my kettles would slide off. None of it was critical. Just, I had a feeling the end times were drawing nigh. If I wanted to be proactive, not reactive, I’d best get on with it.

I plunged back into research. My husband and I drove to actual stores, checking out our options. We read reviews and watched sales. After a lot of mature, very adult-like (and decidedly unlike us) consideration, we finally settled on this one, but from Costco (and no longer available). 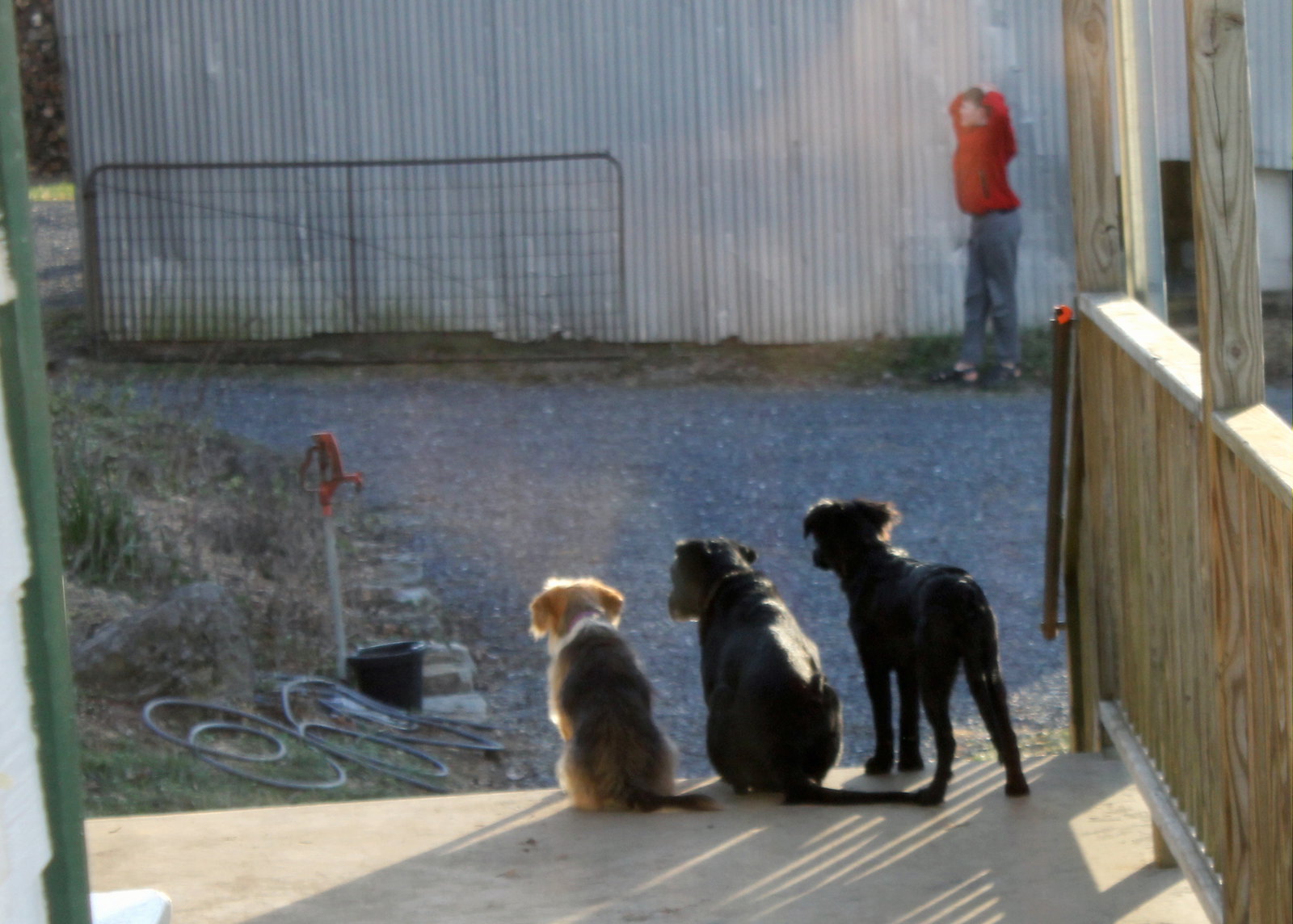 Last Thursday, after a two-week wait, it arrived, finally. 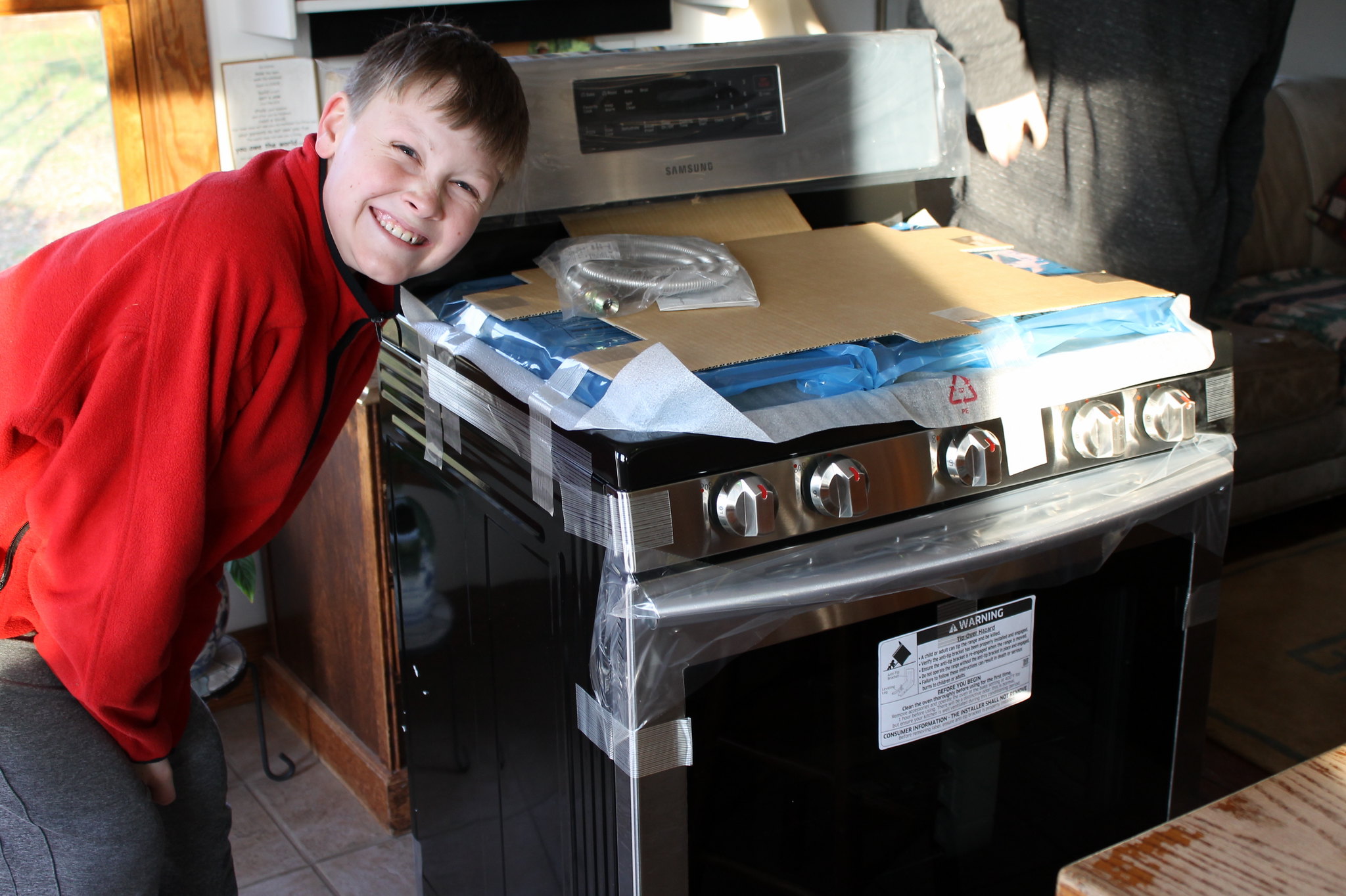 My husband stayed up late that night to install it… 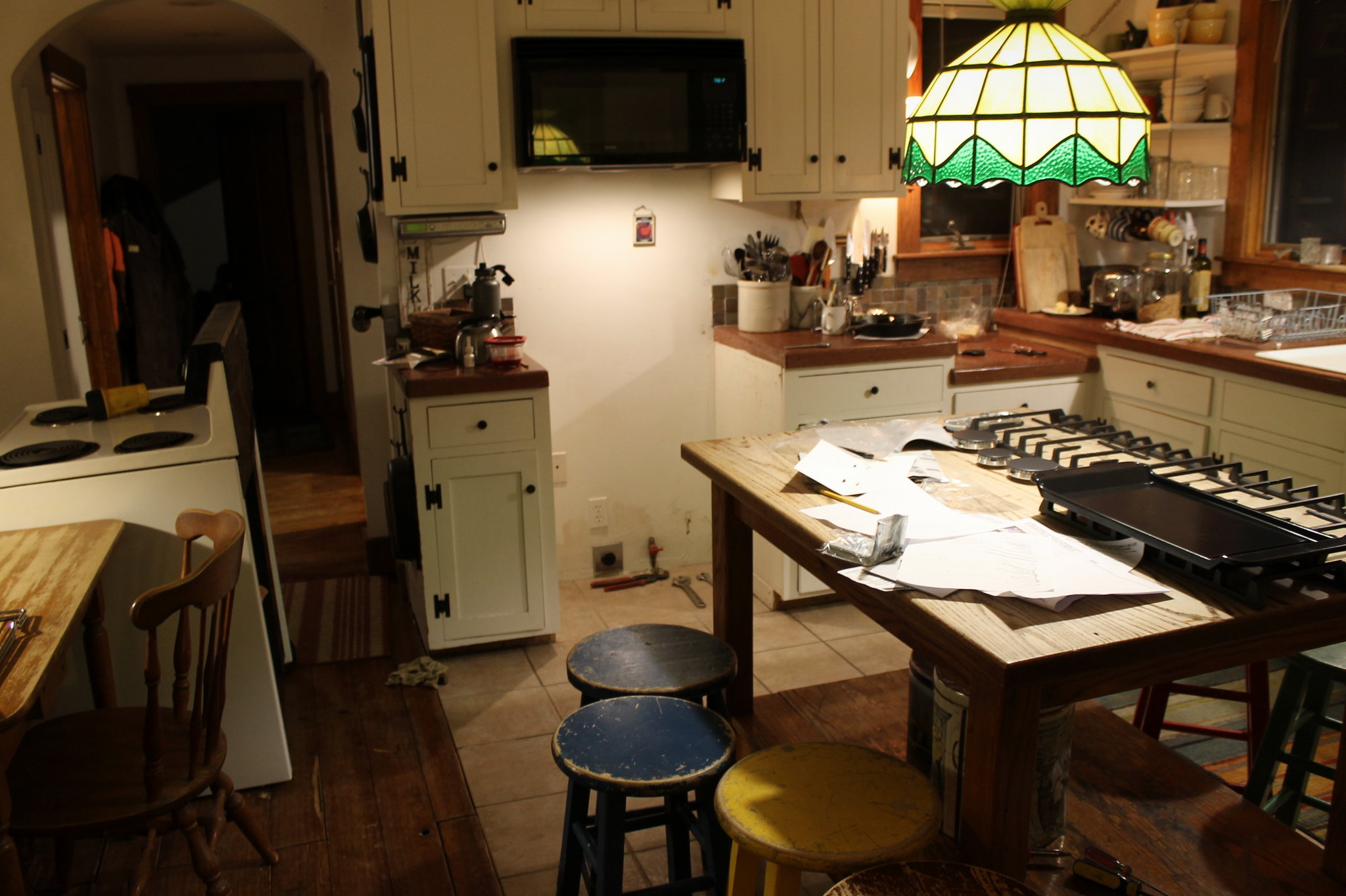 And in the morning when I woke up, there it was, my new best friend. 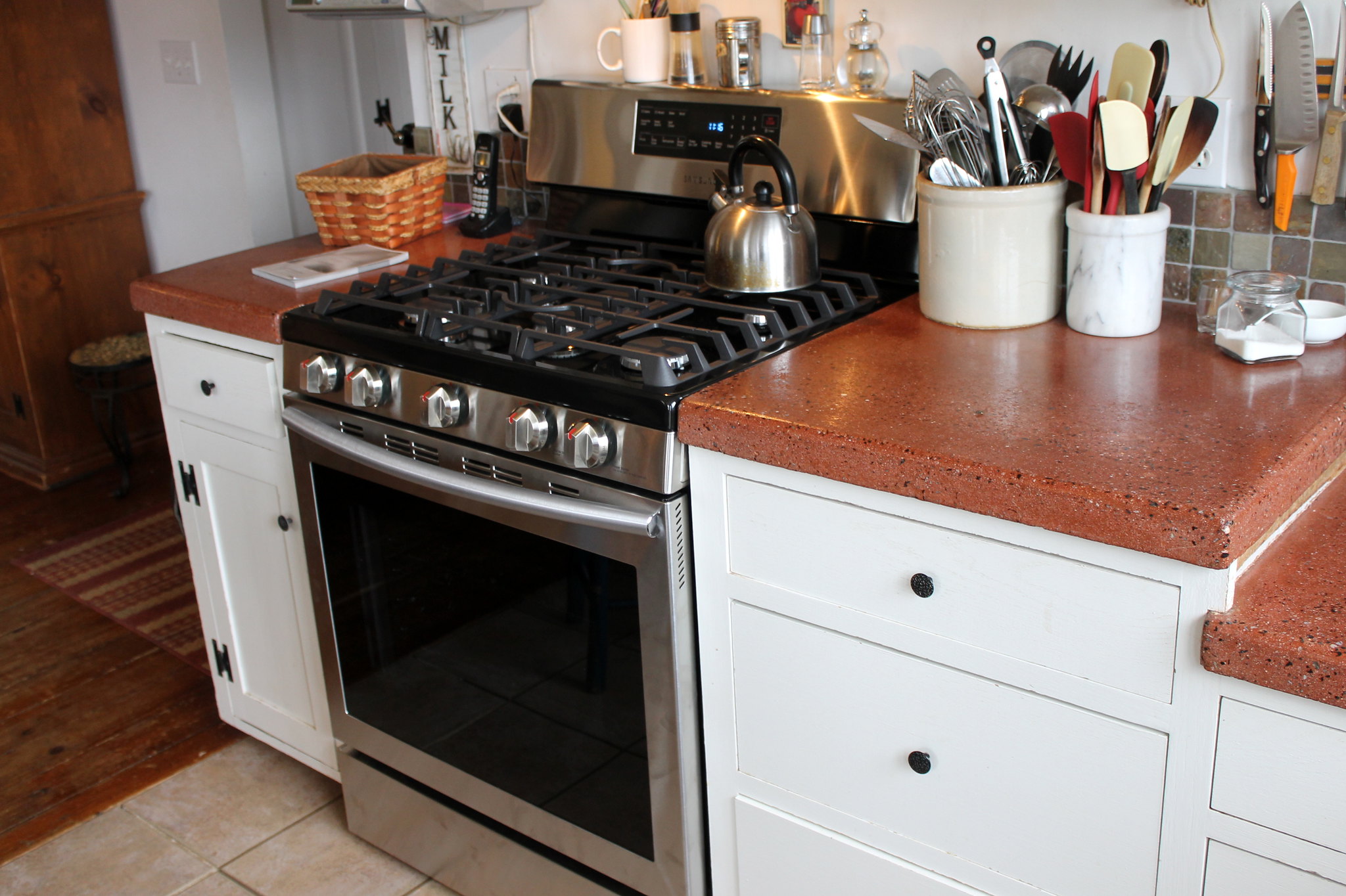 Except currently we’re not besties just yet. More like wary acquaintances. No longer can I just waltz into my kitchen and bang pots and pans all over the place, oh no no no. This stove is far too serious for that. It’s big and solid, intimidatingly so. It’s something to be reckoned with, something to be considered.

Today, with snow in the forecast, I took a day off from my normal write-and-run routine in exchange for a baking marathon. While I’d been using the stove on a daily basis (we do have to eat, after all), it’d been sort of tentative, just a little here and there, as necessary. It was high time, I decided, I quit tiptoeing around the beast and actually got down to the business of figuring out how this thing worked. 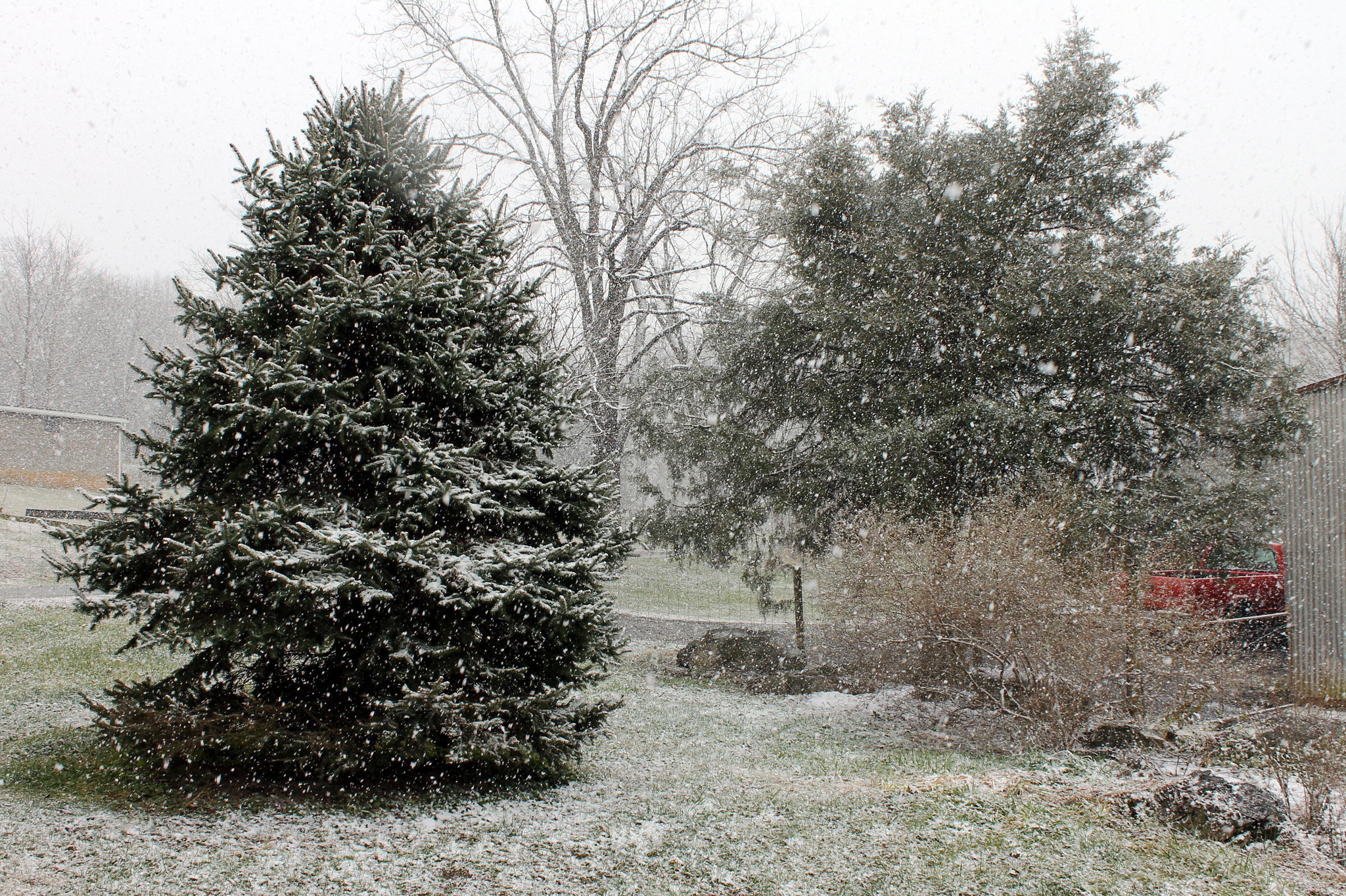 There were those pancakes first off, and then I roast a couple butternuts and some brussel sprouts. The butternuts refused to get brown and I sort of freaked for a little there — What good is an oven that doesn’t brown vegetables? Oh no! I’M GOING TO HAVE TO SEND THE WHOLE THING BACK AND START OVER AGAIN, wahhhh! — but then I kept playing around. I tried the broiler. I cranked up the heat. I experimented between “convection roast” and “convection bake” and regular “bake.” I swapped trays. In the end, the butternuts got beautifully caramelized (whew), and then the brussel sprouts blackened gorgeously, and fast. 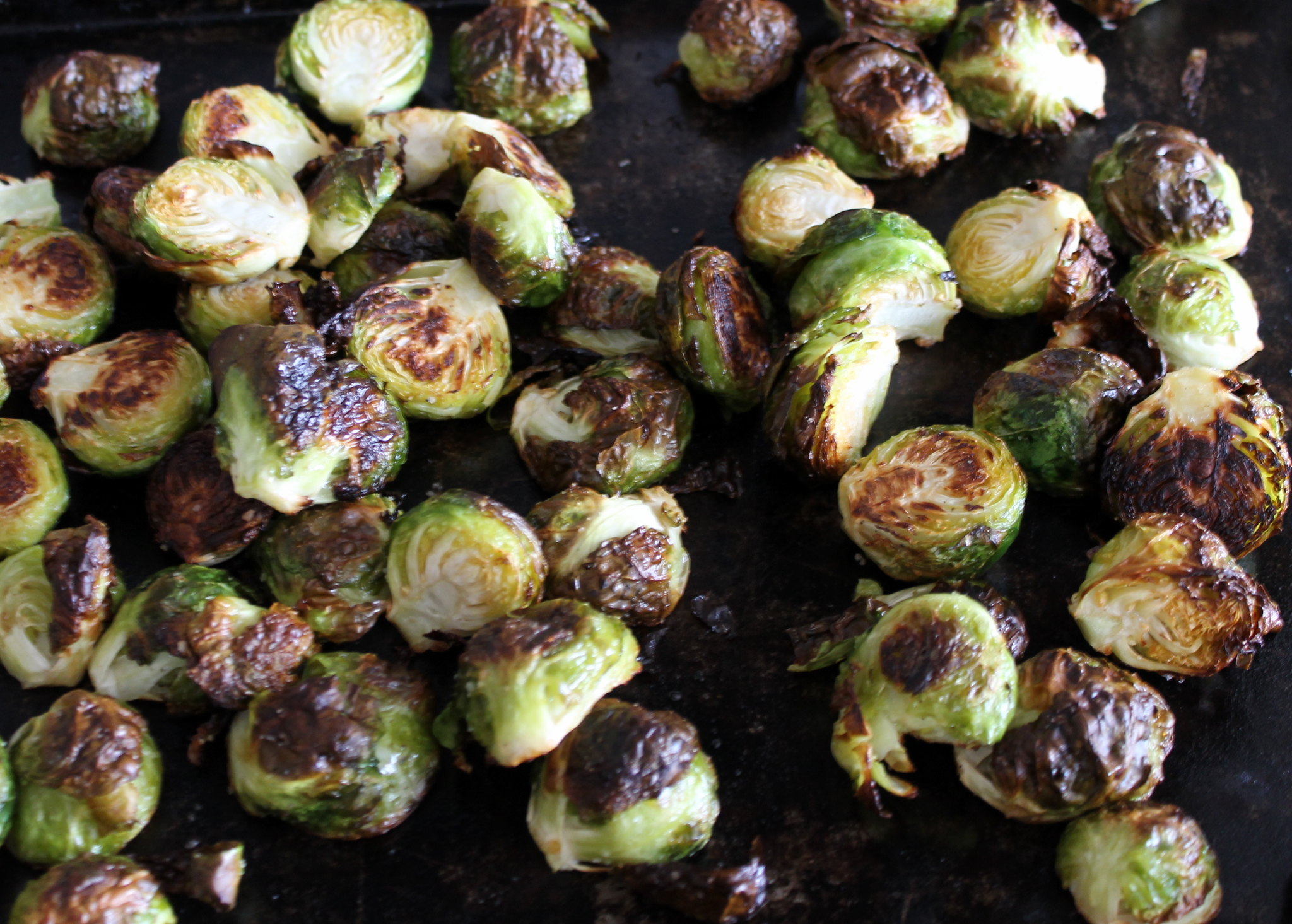 Now, as I type, I have French chocolate granola toasting. Next up is a cranberry walnut crostata, and then a loaf of ciabatta for supper, to go with our roasted veggies.

The enormous — no, cavernous — oven really is out-of-this-world dreamy. Convection bake is incredible: I love, love, love being able to pop things into the oven at any level, and pies and pastries and bread bake up a gorgeous golden brown. The proof setting is sweet, and I haven’t even gotten around to experimenting with time bake. With space for seven racks (ordering a couple more is on my to-do list), I haven’t even come close to maxing out the oven’s potential. It’s a real workhorse, a beast, rawr.

But you wanna know the very best part? The big glass door and the oven light! 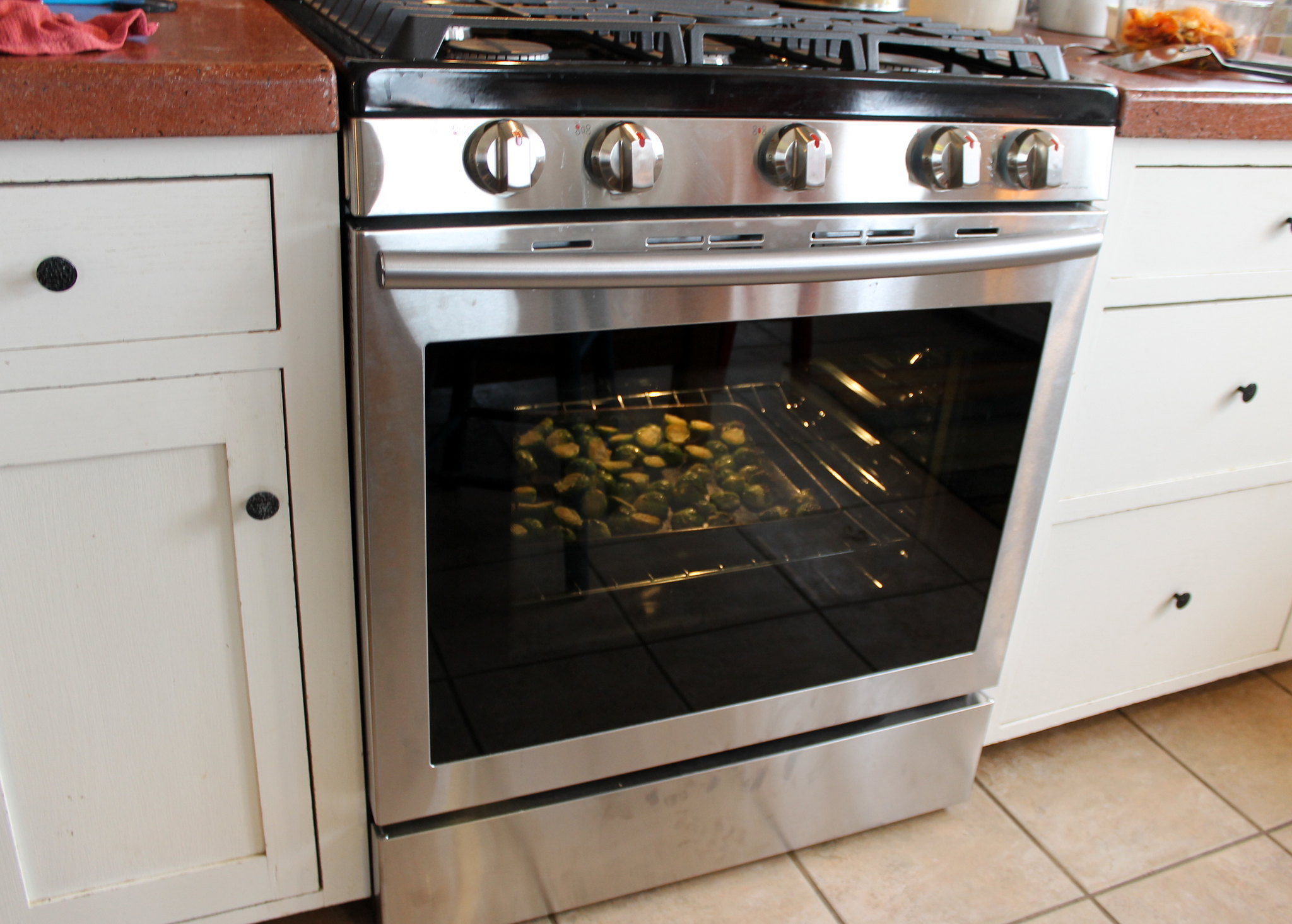 You know how in The Great British Baking Show the contestants often kneel on the floor in front of the oven to anxiously watch their bakes? Well, that’s me now! I CAN DO THAT. I can squat on the floor and watch things bubble and sizzle, brown and rise, to my heart’s content. Such thrills!

Not everything is perfect, of course. The oven puts out a lot of heat. As in, the kitchen’s temperature shoots up an easy two or three degrees every time I bake. This is fine in brr-cold weather, but in the muggy summer heat, I’m afraid it’s going to be wretched. I paged back through the stove reviews to see if I overlooked some critical complaints, but a preliminary skimming didn’t reveal any comments regarding this issue. Am I the only one bothered by tremendous heat output?

Also, certain burners don’t seem to get hot enough, and others don’t go low enough. In fact, I don’t feel like the burner flames have much variation at all. But maybe I just have to get used to them?

I keep telling myself to stop panicking over every little glitch. There’s gotta be a reason the stove has nearly five solid stars. Plus, I’ve been a good twenty-some years with an electric stove, so it only stands to reason that a fire-breathing monster is going to take some getting used to.

I’ll get the hang of it. In no time at all, that stove and I will be BFFs. Just you watch.

This same time, years previous: books and movies, by a thread (if you need a laugh), writing: behind the scenes, in the sweet kitchen, oatmeal sandwich bread, nanny-sitting, the college conundrum, Thanksgiving of 2013, sushi!!!, baked ziti.