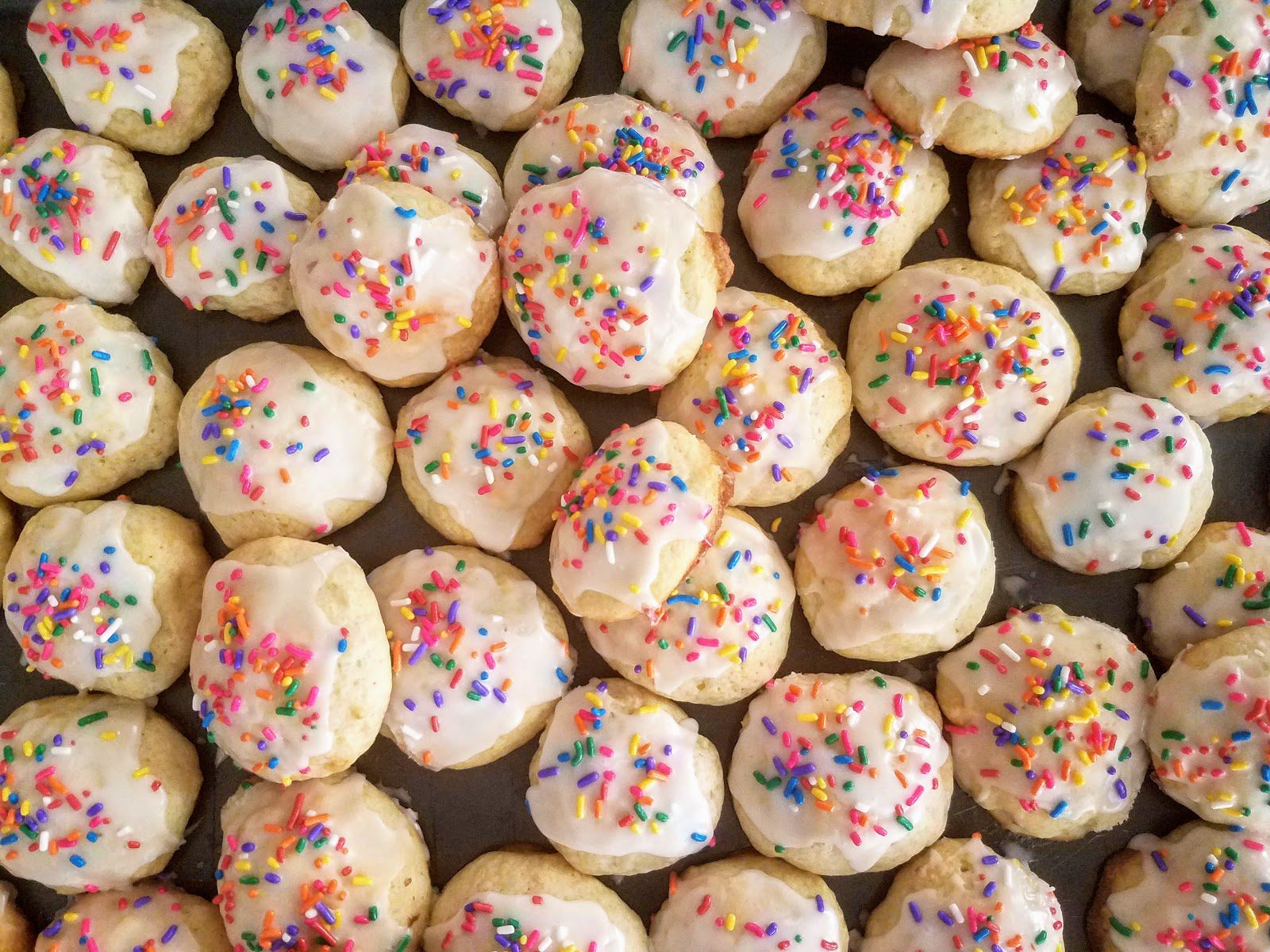 I woke at 3:30 this morning, my mind racing, finally ready to write. So much to say, no idea where to begin…

Crunch week turned into Cram Weekend, as in we crammed in as much stuff — work, social events, goodbyes — as possible, and then we kept cramming: belongings into suitcases, and bodies and luggage into cars and planes. Now we’re home and just beginning to unwind.

But backing up. I can’t just move straight from rush-rush-rush to home. I gotta tell you about finishing out the week: closing out the project! the house warming! the going-away party!

Friday was The Big Day: cleaning up the jobsite and packing, plus the house dedication at six followed by our despedida. We were originally going to have the house dedication on Thursday night, but then it rained — hard, and for hours — and the power went out and life slowed waaaay down, and so we postponed. Which was good, my husband agreed, because that allowed them to get a lot more work done before they had to make the house all presentable. 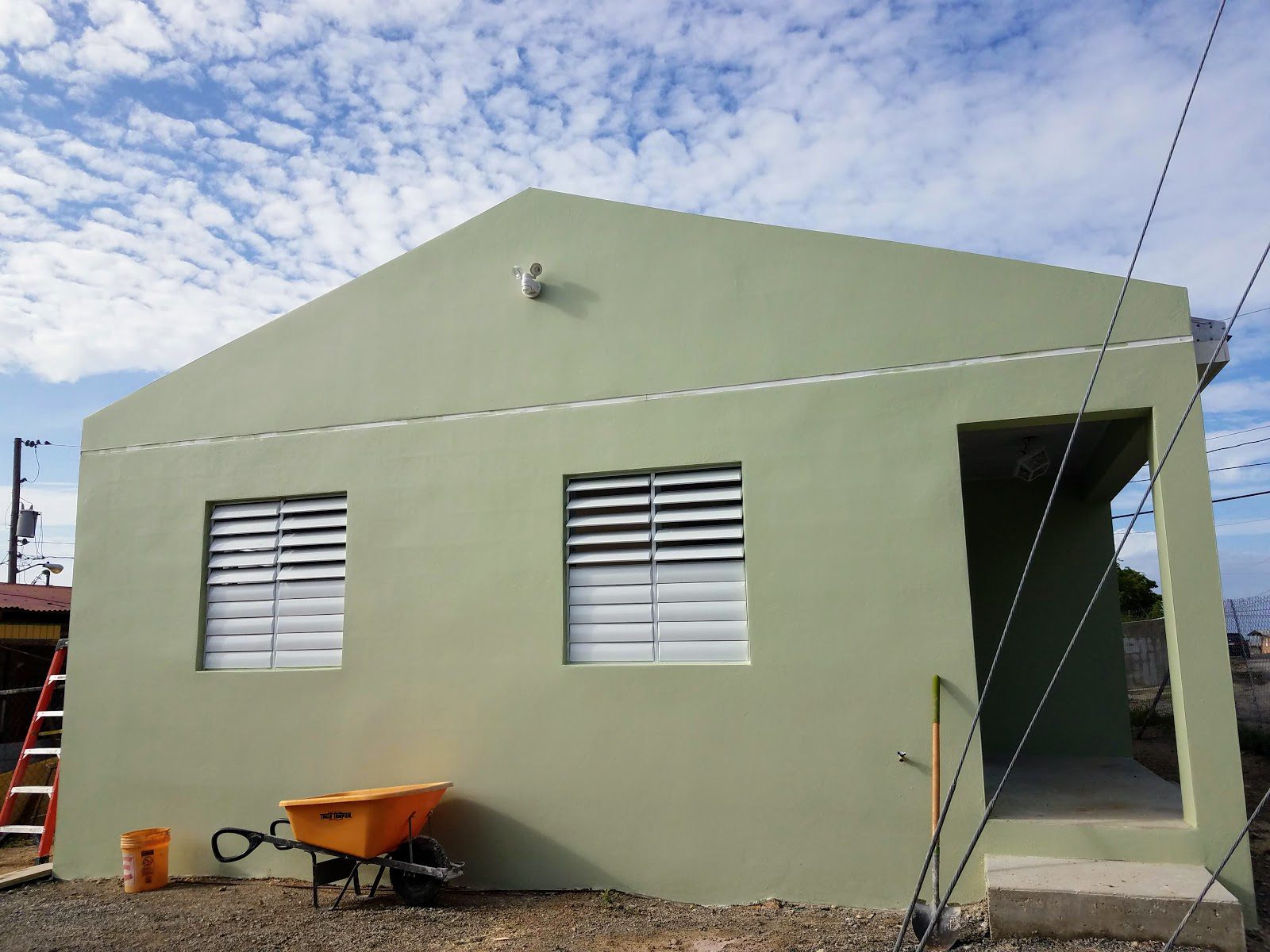 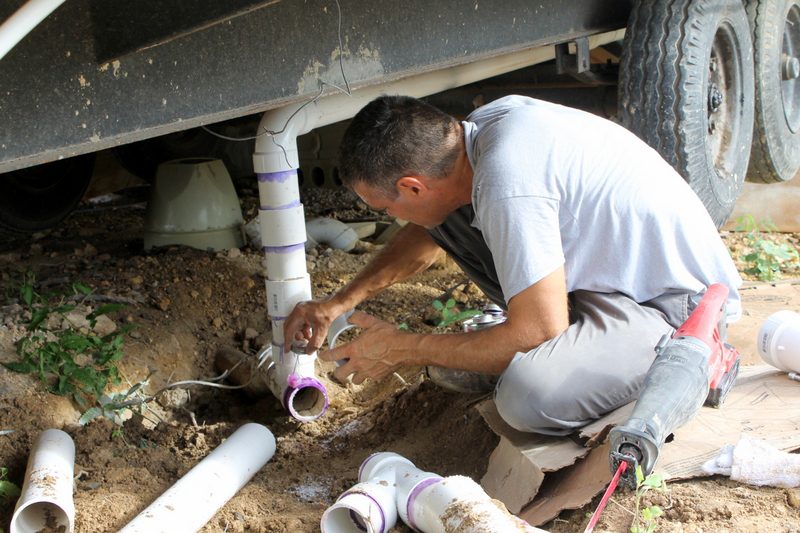 Funny little poop story: my husband cut the sewer lines while my uncle was using the bathroom. 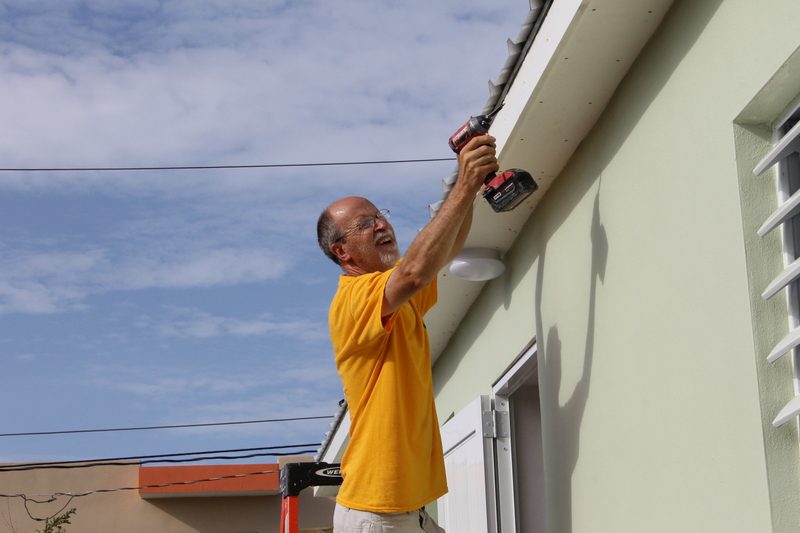 I dreaded the dedication. All week long I felt like I was bracing myself for a tidal wave of raw emotions. Speaking in Spanish — my words never adequate enough — through all the feelings, ugh. I knew I’d be a mess.

We got to the jobsite early. The plates of cookies on the new kitchen counter and drinks in the fridge, we walked around looking at the (almost) finished product and taking photos. 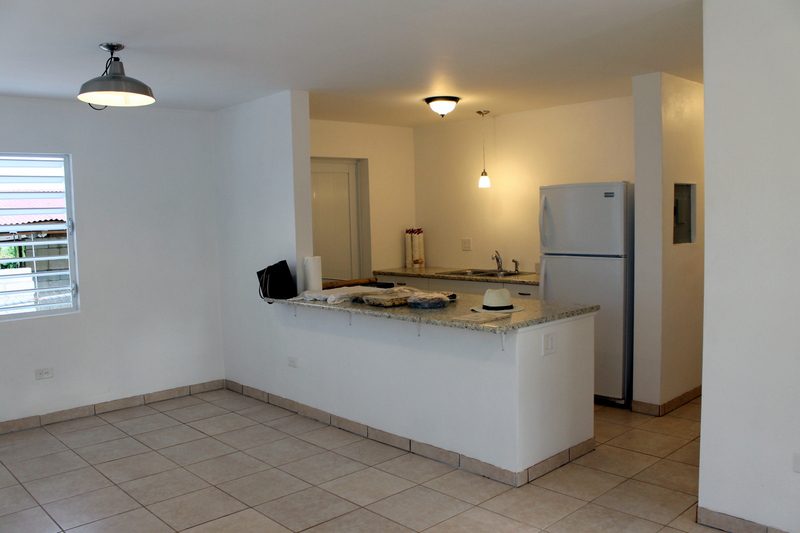 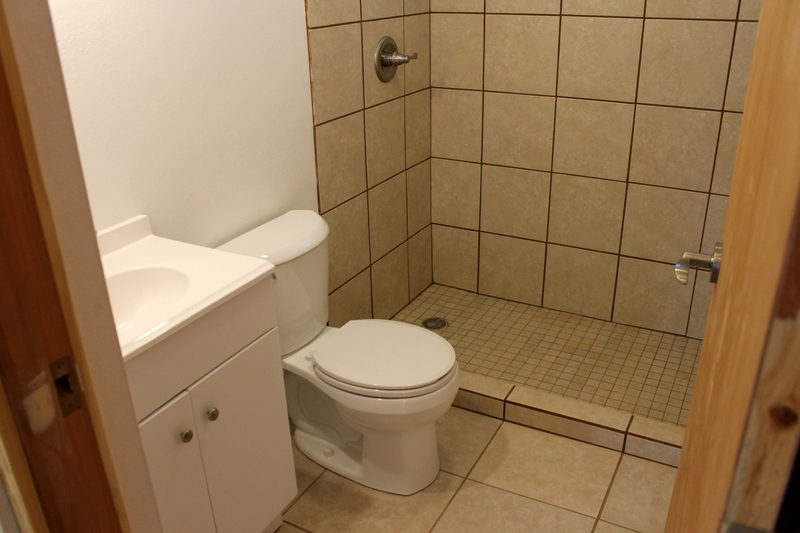 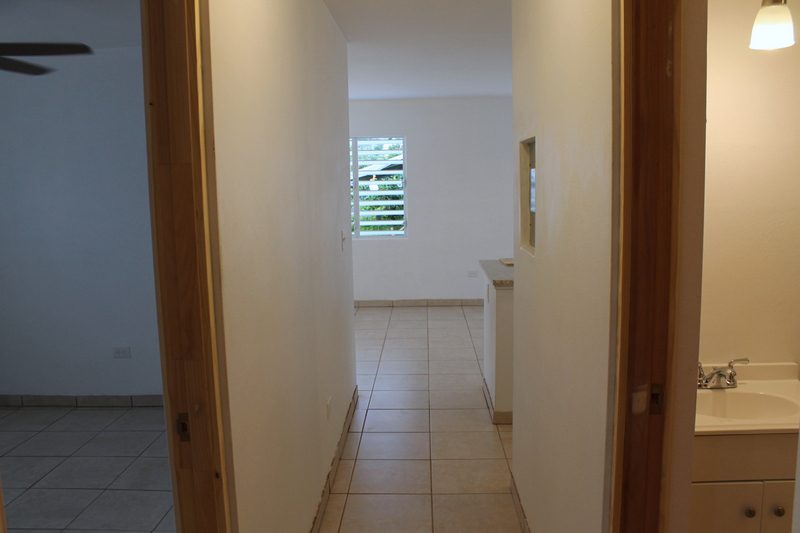 Airy and small, it’s built like a rock. Both simple and efficient, it’s beautiful, too. I am so proud of the work we have done, and so proud of all the dozens and dozens of people who volunteered to make Nilda a home. 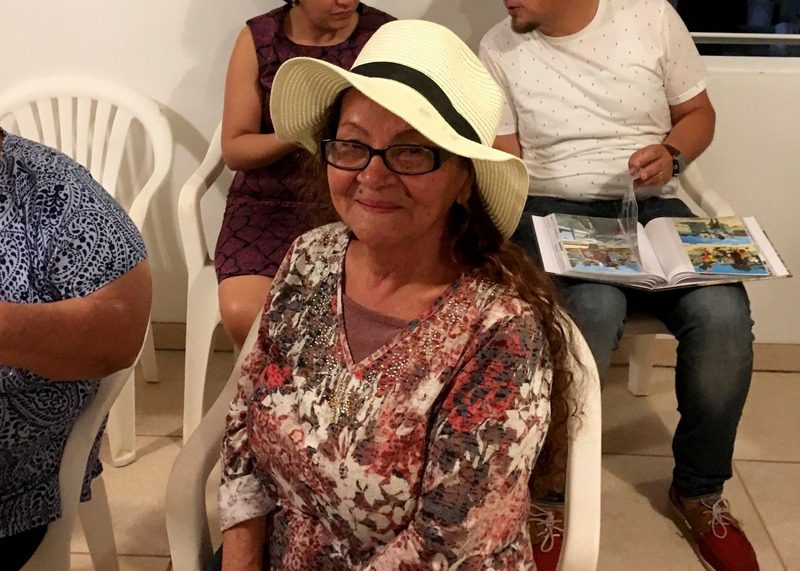 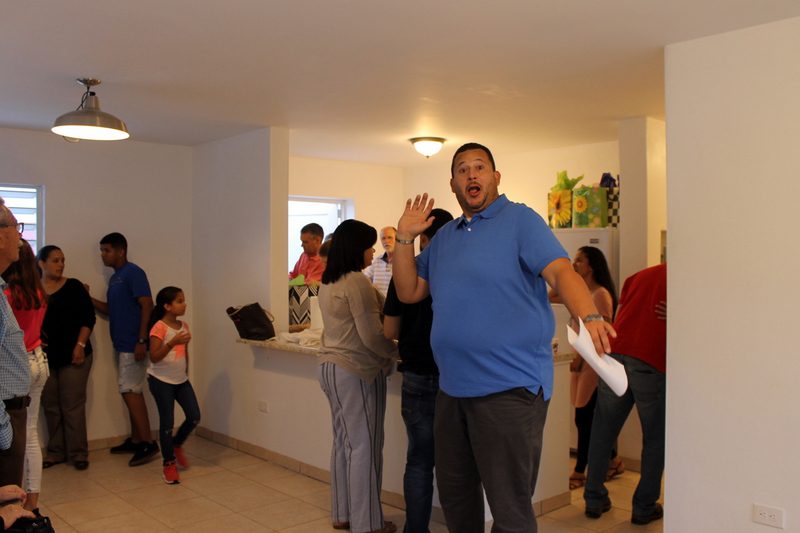 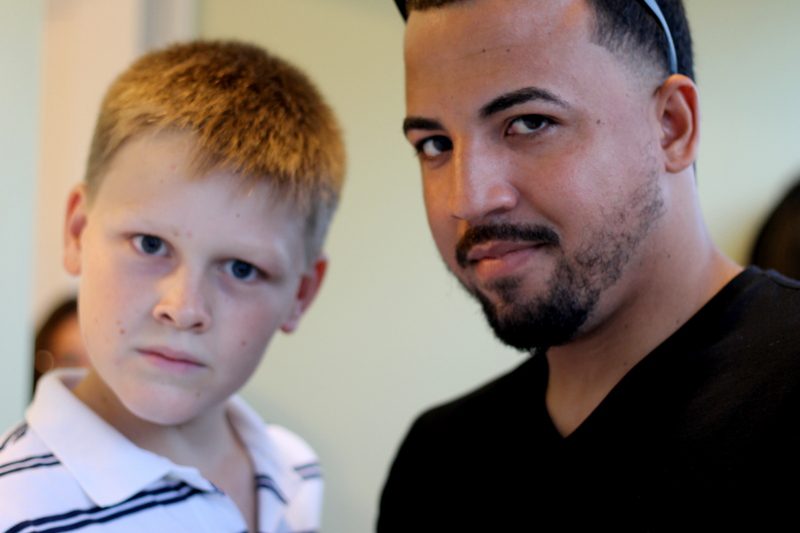 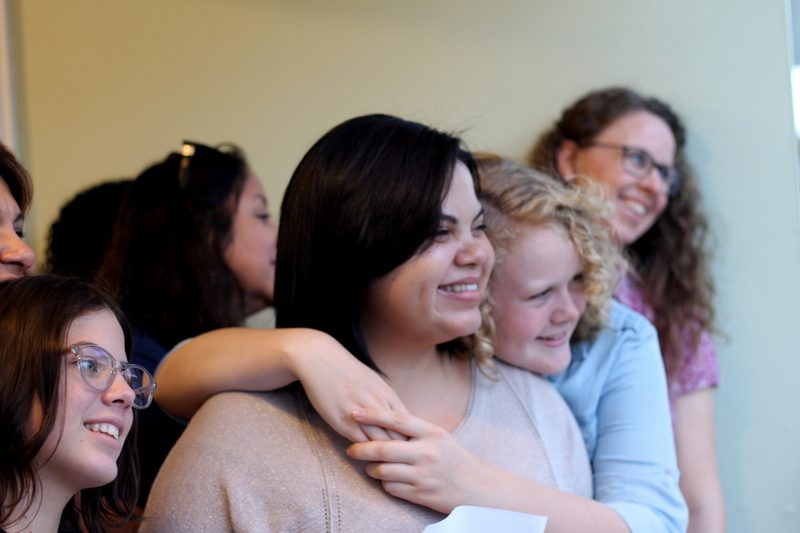 During the dedication, we read off the list of volunteer names. My husband and I read the volunteers from the States, alternating back and forth, and then Lery and Chiro read the names of the local volunteers.

Those names make up just two small paragraphs, but if you read each name out loud (do it!), keeping in mind the dozens of people backing each name — providing support emotionally, financially, logistically — it’s more than a little impressive. So much love!

The ceremony was, like the house, simple and straightforward: we gave a welcome, there were a couple prayers, a song (What Is This Place, sung by my uncle and cousin and the two younger kids and me, and I kept it together!), a reading (that I nearly forgot about so we added it at the end), and the presentations to Nilda and her family: the key to the house, a photo album that I’d filled with photos of the building process, a wallhanging made by my cousin Zoe, and a Bible. 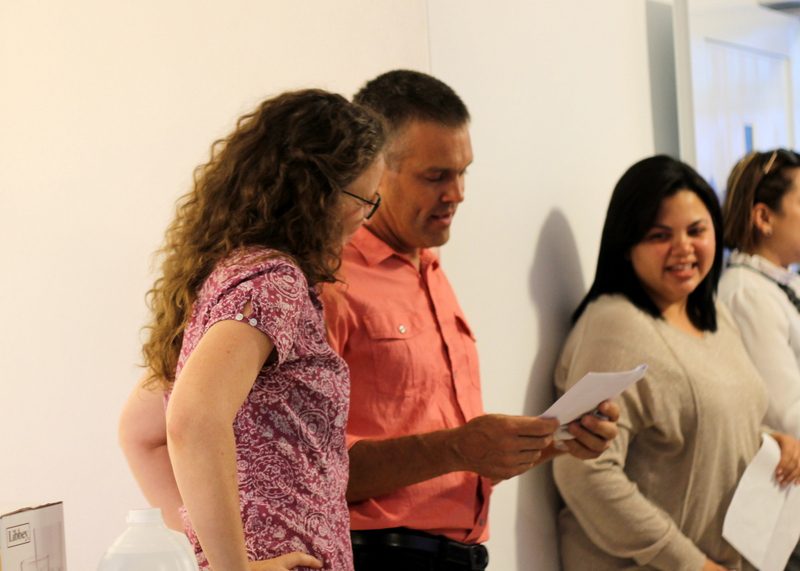 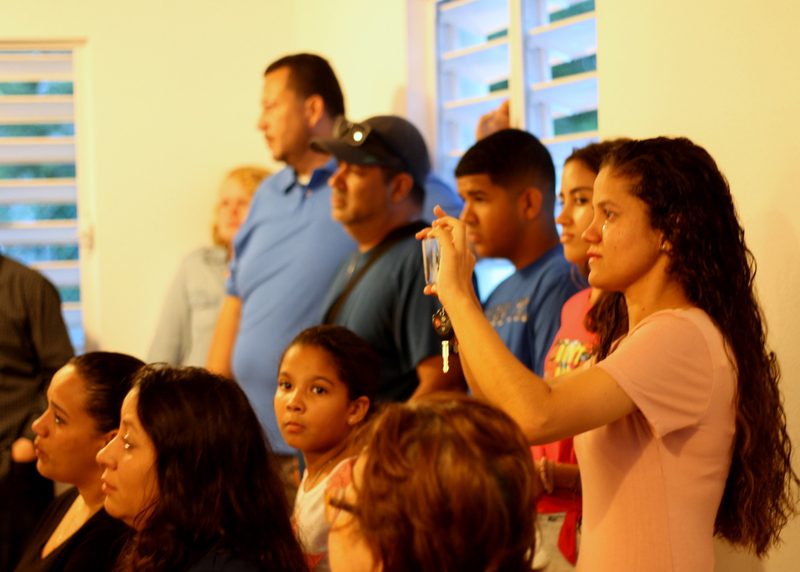 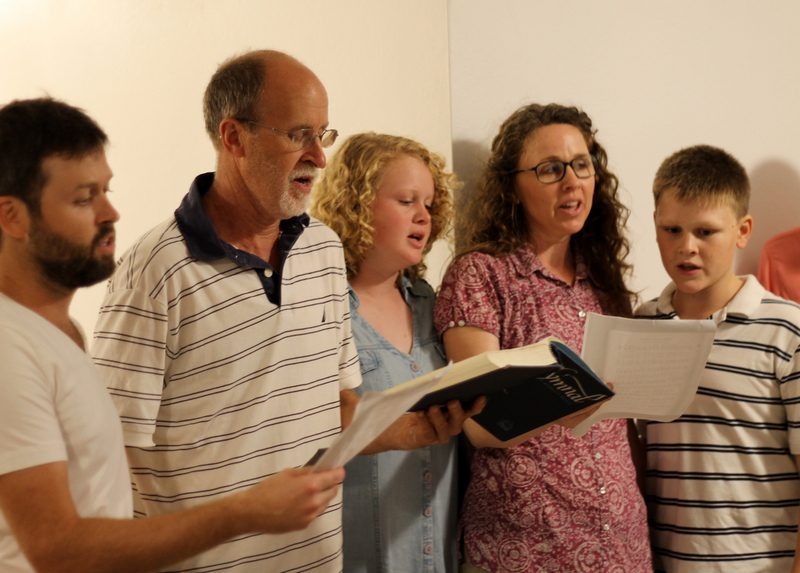 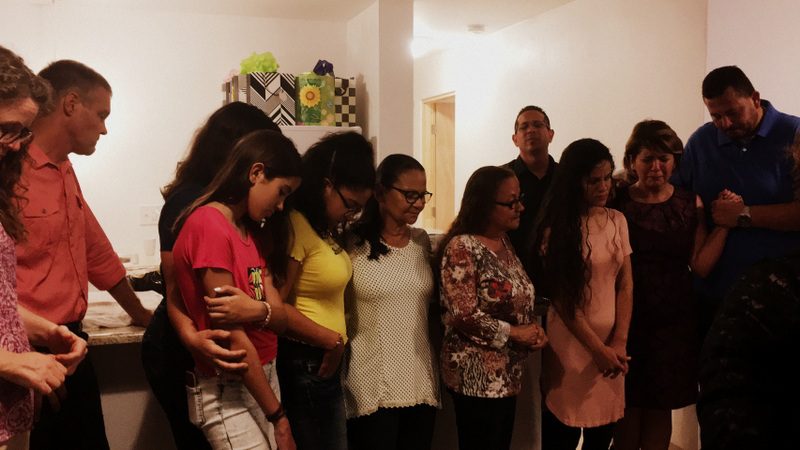 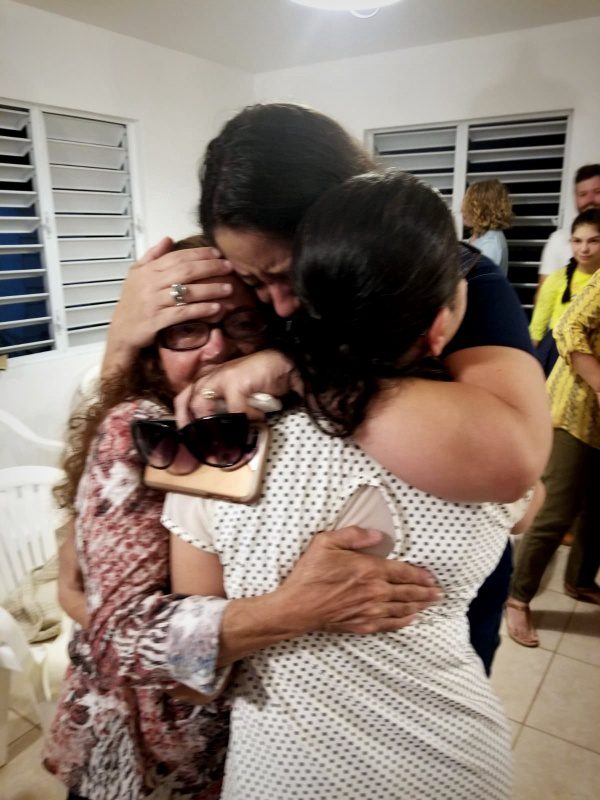 Nilda, her oldest daughter, and her sister Carmen

We cried off and on (my husband more than me, ha!), but most everyone else did, too, so it didn’t much matter.

And then there were the snacks, and lots more photos, of course. 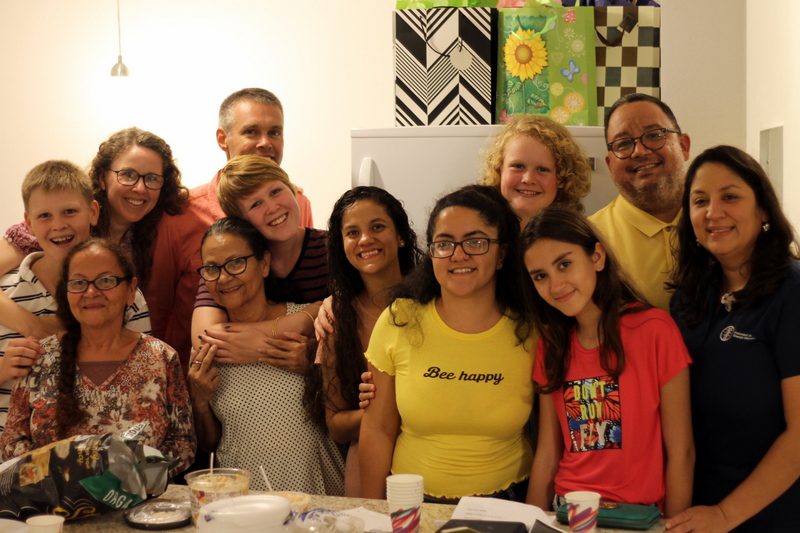 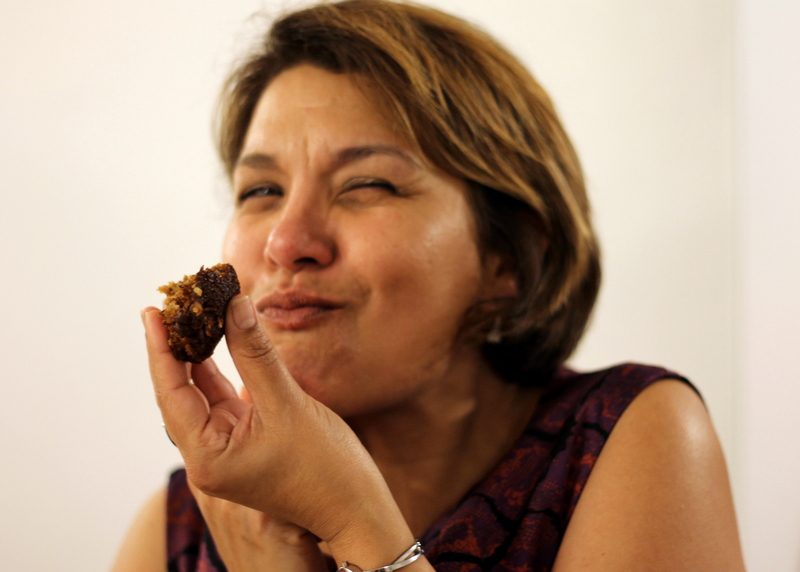 From the dedication, we high-tailed it over to the church for our despedida. And what a despedida it was! We didn’t get home until after midnight, and the next morning when I popped awake after only a few hours of sleep, I felt aglow with the memories from the previous evening, like I was a-light, from the inside out, with twinkle lights, each one a sweet memory from the previous evening.

The church had been transformed: yellow caution tape over the doors, and yellow paper-covered tables had been set up. Shovels and hardhats leaned against the pulpit, and the table at the front was spread with an array of photos and plaques. 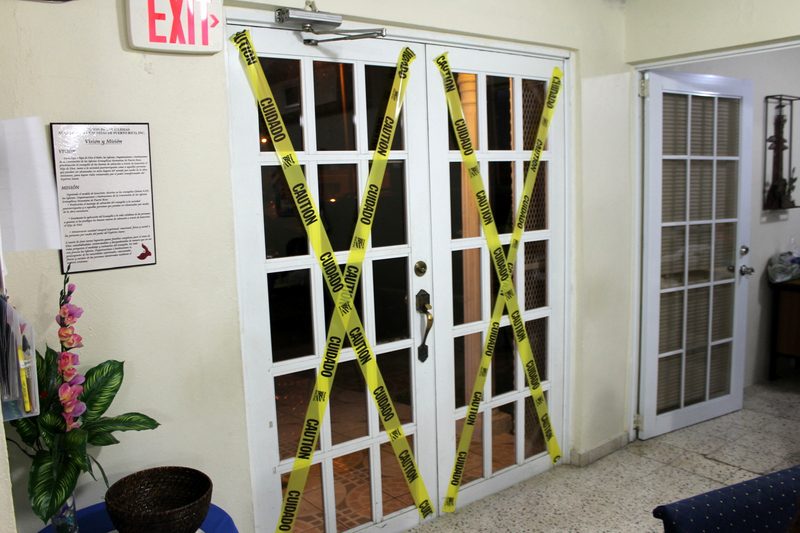 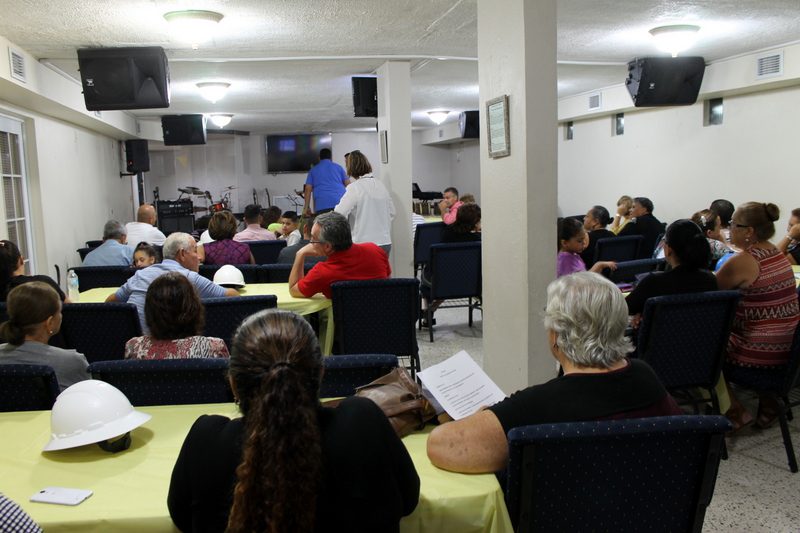 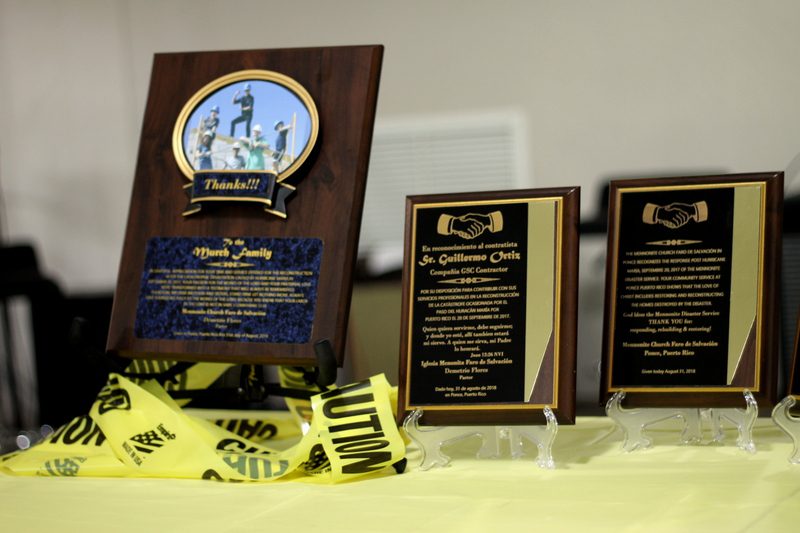 We were crying before it even started.

Sometimes all the attention and accolades lavished upon us by the local community has made me squirm. Look, I want to say, we’re just an ordinary family plodding along. Sure, we’re giving something (though in the face of so much need, it’s hardly a drop in the bucket) but we’re getting way, way, way more: friendships and family time, Spanish skills and a heightened sense of purpose, adventure.

But then, over the last few months as I’ve listened to person after person share about how we’ve inspired them, showed them the true meaning of service, taught them to be better Christians, I’ve gradually come to realize that this isn’t about us. It’s about something much bigger than the sum of our motley parts: it’s about hope. Through dozens of sacks of cement, and a bunch of two-by-fours and sheets of drywall, an entire community has felt, in a very concrete way (ha!) that they’re not alone, that goodness is real, that grace and mercy are tangible. 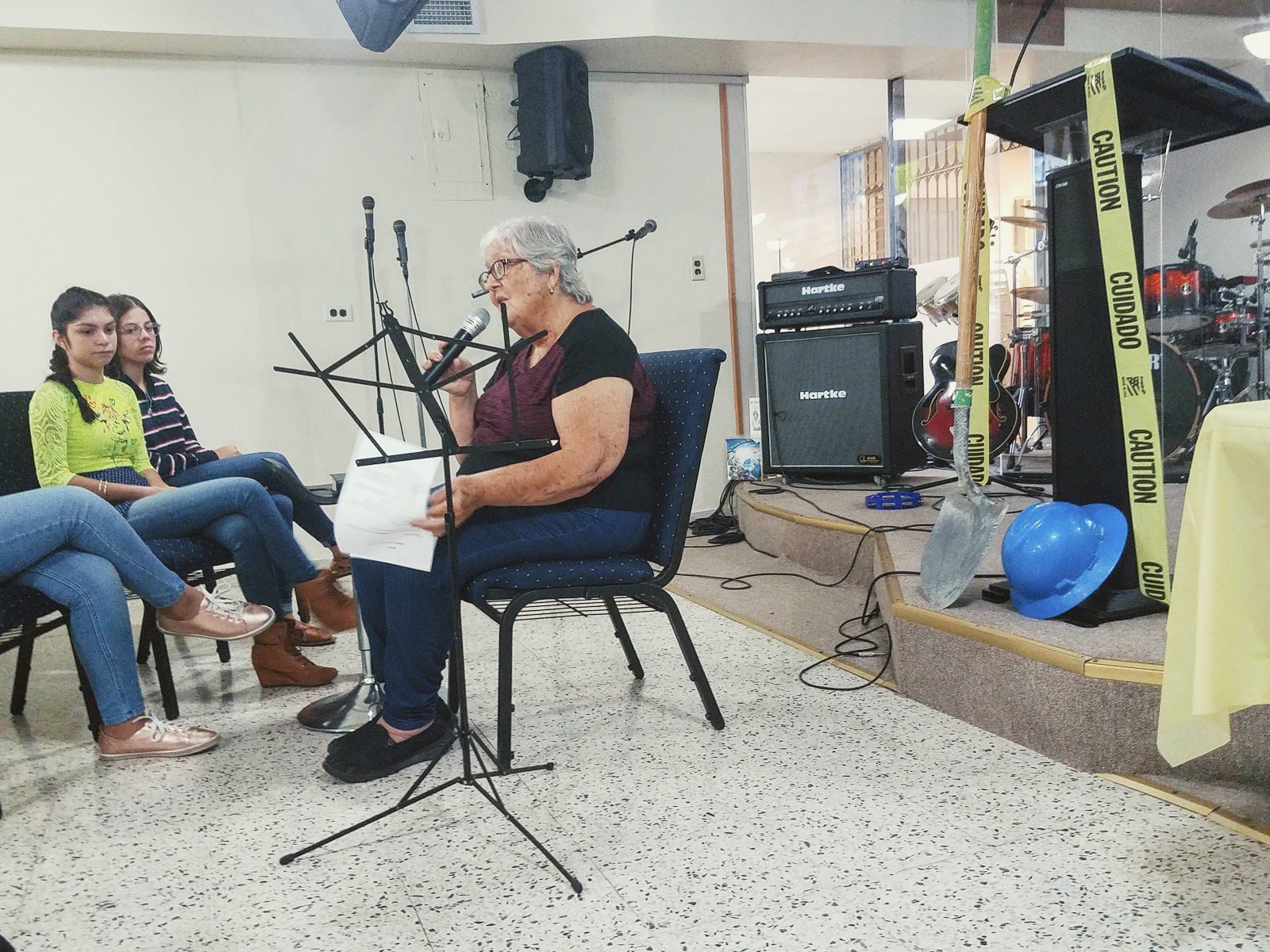 Olga gave a beautiful, thoughtful meditation, and then there was a time of sharing in which a number of people, in hopes of keeping the tears at bay, made a point of not looking in our direction. Rolando showed a video he’d put together, pretty much encapsulating everything. There were clips of the actual hurricane and news footage. There were photos of Nilda’s destroyed home. There were videos and photos of them getting ready for our arrival, and then a whole slew of videos, still photos, and drone shots of the actual building process (soundtrack: Lin-Manuel Miranda’s Amost Like Praying). There were wonky photo/video collages of  each of the kids in turn (accompanied by the Flintstones theme song), plus old photos of the kids working when they were but little tots (Rolando and his wife perused our photo albums when they were at our house!). One minute we’d be laughing and the next we’d be crying. It was a good thing I packed tissues.

And then we were invited to the front to receive plaques — each one presented by a different person — and then the gifts started flowing. The church had sent out our clothing sizes, and people had purchased everything from shirts and hats, to shoes and socks. Plus, there were handwritten notes, cards with money, gift cards, homemade jewelry, a wooden press for making tostones and a wooden mortar and pestle for making mofongo, coffee, candy, mugs, paintings, and on and on and on. The kids were positively bug-eyed and giddy with glee. 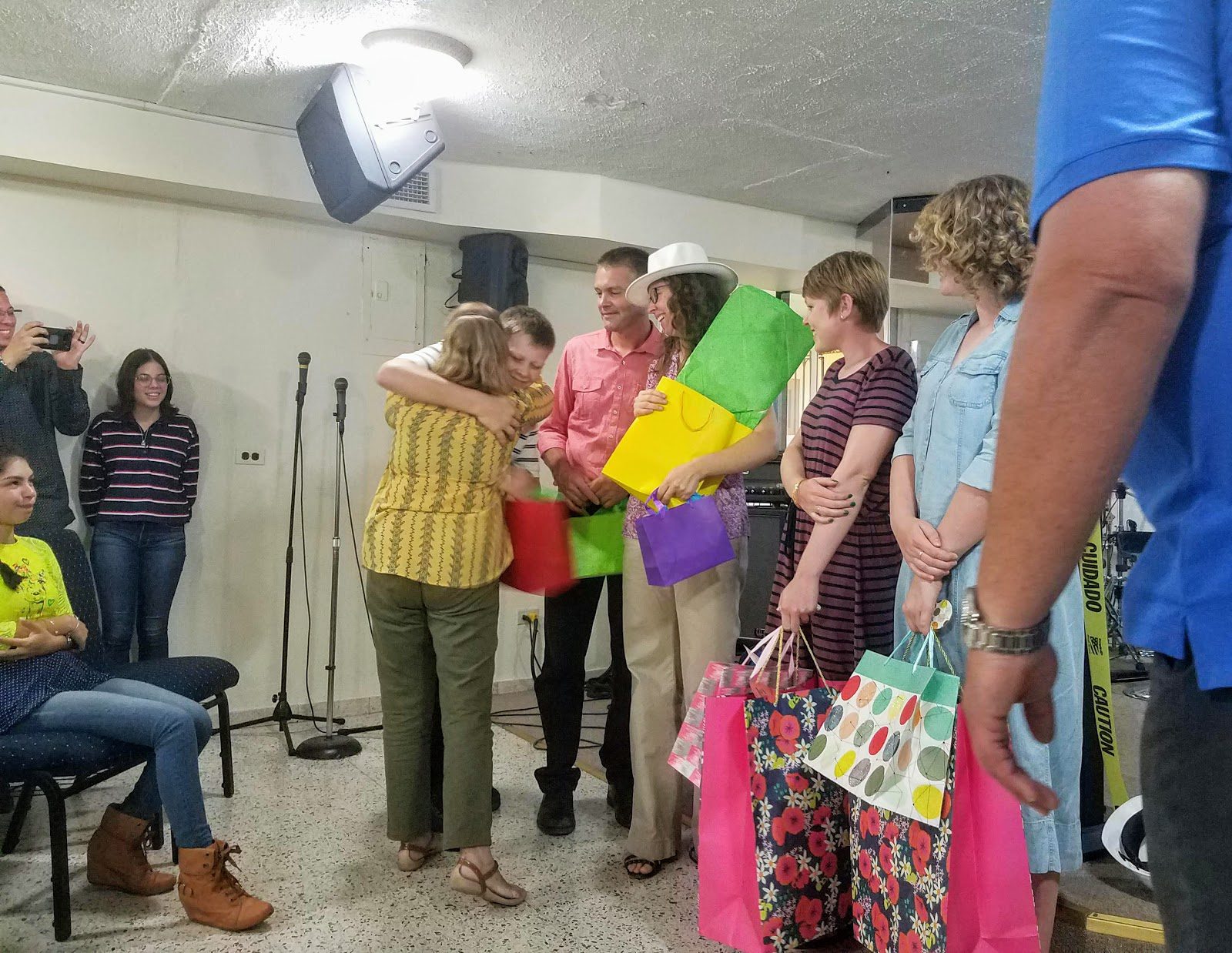 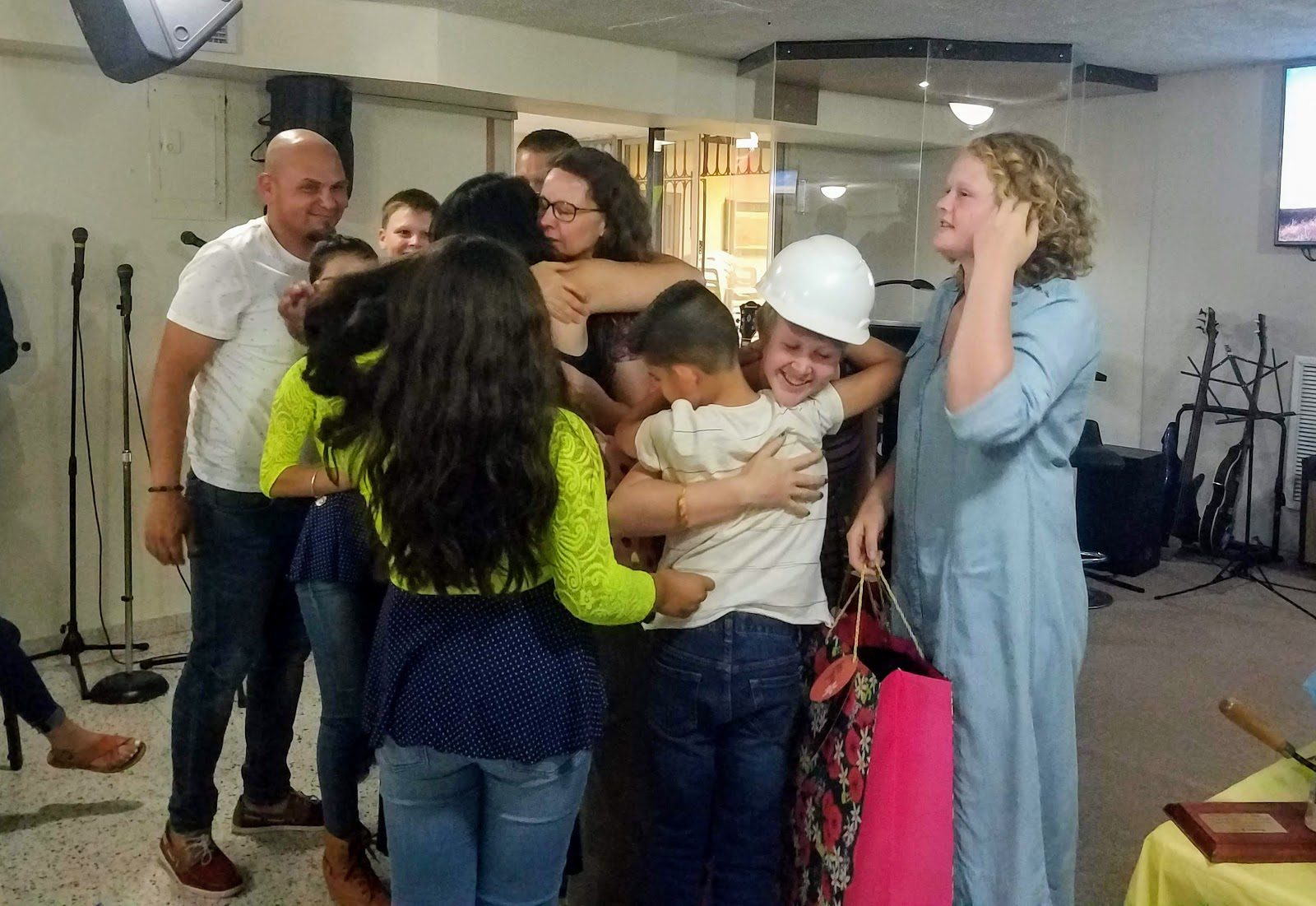 By the time the evening was over, I felt both washed out and filled to the brim. We’d said all the words and heard all the speeches, exchanged hugs, taken a million photos, and both sobbed and belly-laughed. Goodbyes are hard, but done right— and Puerto Ricans know how to do them right! — they are cathartic, too.

Goodbye, Puerto Rico, and thank you. We love you dearly.