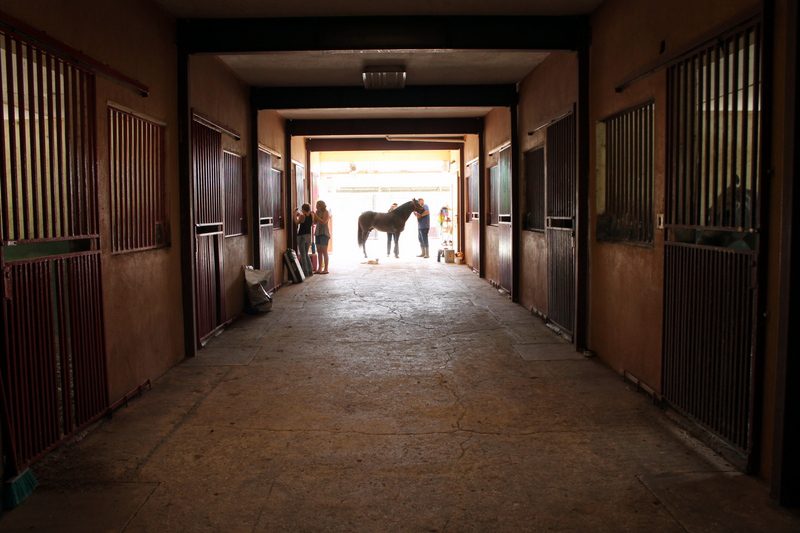 Wednesday morning, I took the three younger kids to a horse farm on the outskirts of Ponce so my older daughter could ride.

This opportunity came about via a member of our church. Daniel used to ride horses when he was younger, so he appreciated my older daughter’s interest in riding. When my daughter turned 17, he and his wife — it was her idea, he said — stopped by with a gift of a brand new bridle and reins (!!!), and then this last week Daniel connected us to this farm. On Sunday after church, we followed him and his wife out to the farm so we’d know where it was, and then he sent me the owner’s phone number. Call her to schedule a time, he said. 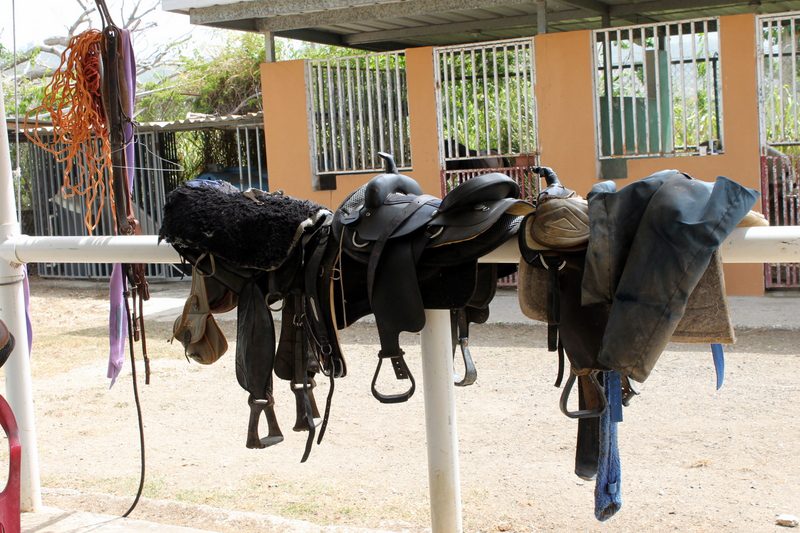 It felt a little awkward, cold-calling a stranger to see if we could come over (Were they truly okay with a bunch of strangers showing up on their doorstep? I didn’t want to be a bother! Were we taking advantage?), but Daniel had insisted that this was totally okay — it was all arranged, he said — so I shelved my qualms and made the call. The owner was bubbly and warm; she’d meet us at 9 the next morning. 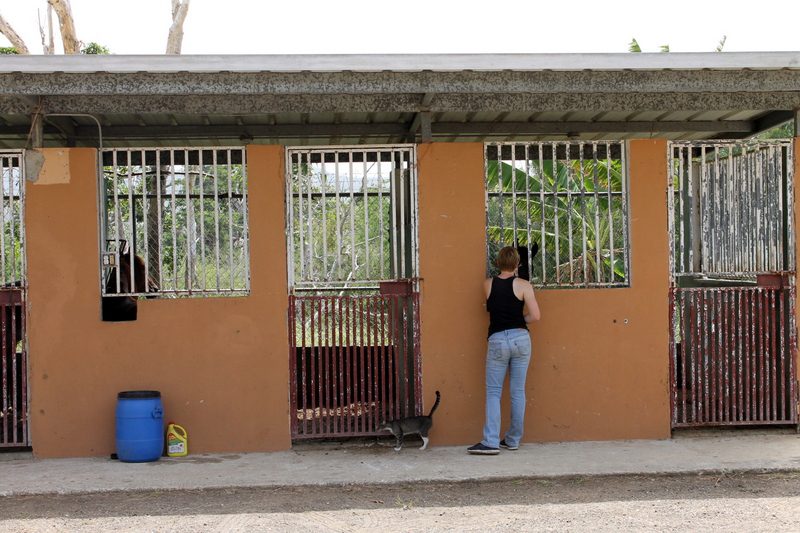 The owner briefly showed us around the farm — we were introduced to the dogs, the pig, the sheep, and we peered down at the small river that, during Maria, had swollen to such a size that it had gouged out a fair chunk of her land — before leading us behind one of the barns where two of the hired men had two horses (she owns about twenty and boards another dozen or so) saddled up and ready to go. 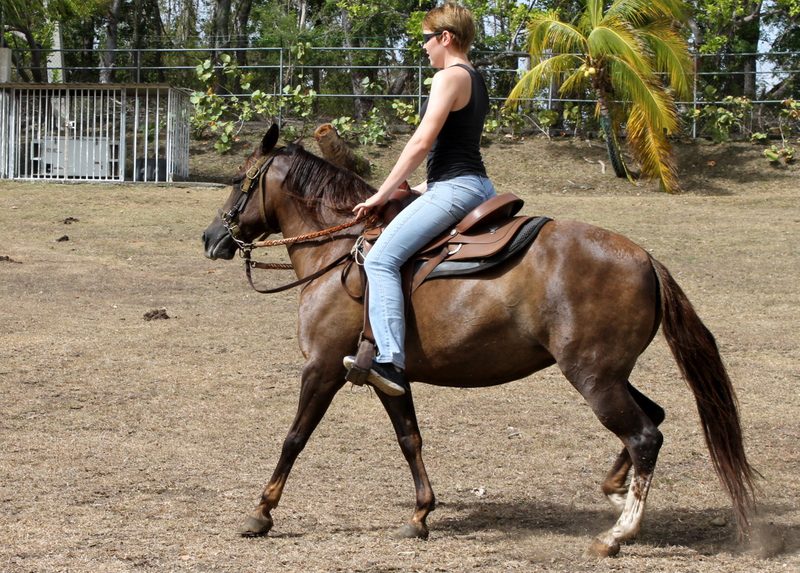 My older daughter hopped right on and took off. 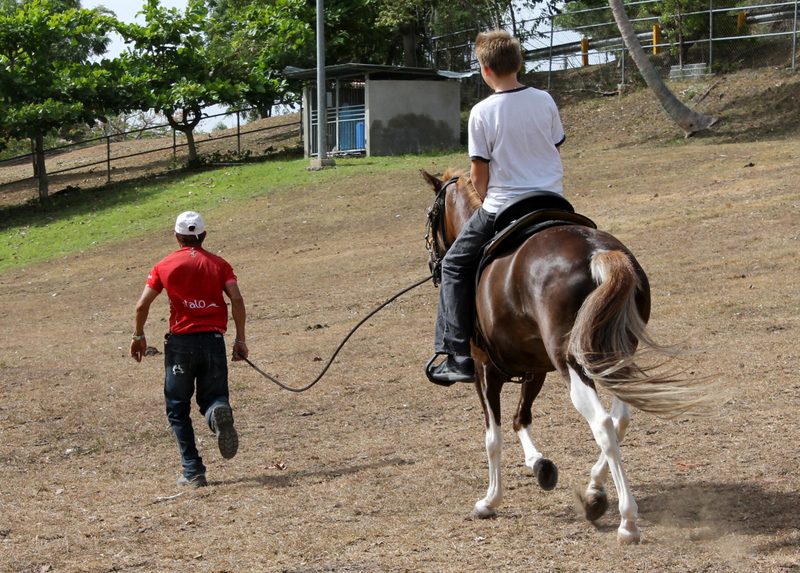 For my nervous younger son, the hired men kept the horse on a lead and took turns running back and forth across the field until he was comfortable enough to ride by himself. 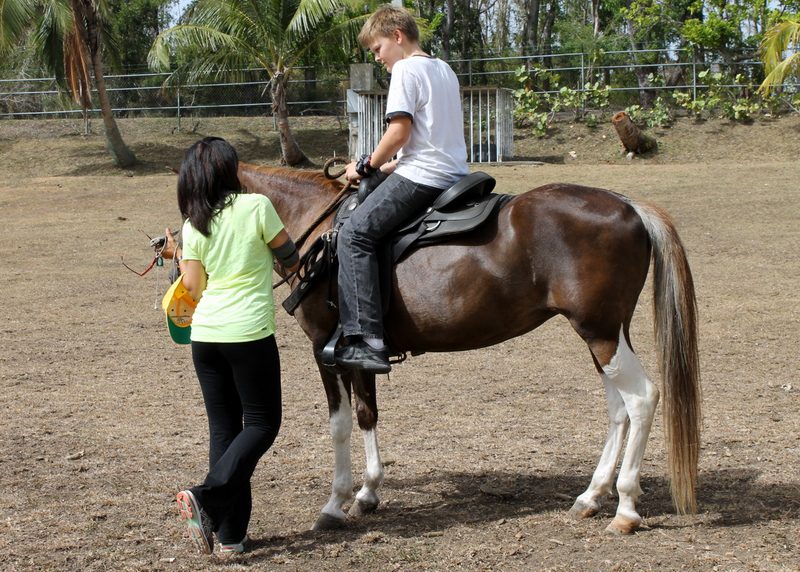 After a bit, one of the men — he seemed to be in charge so I’ll call him the manager — brought out another horse, this one a Paso Fino. He rode the horse up the drive, her legs shooting up and down like pistons, the staccato tah-tah-tah-tah of her hooves striking the concrete sounding just like a train clickety-clacking over the rails (like this). The other Sunday, he proudly told me later, he’d competed with this horse, and they’d won, too. 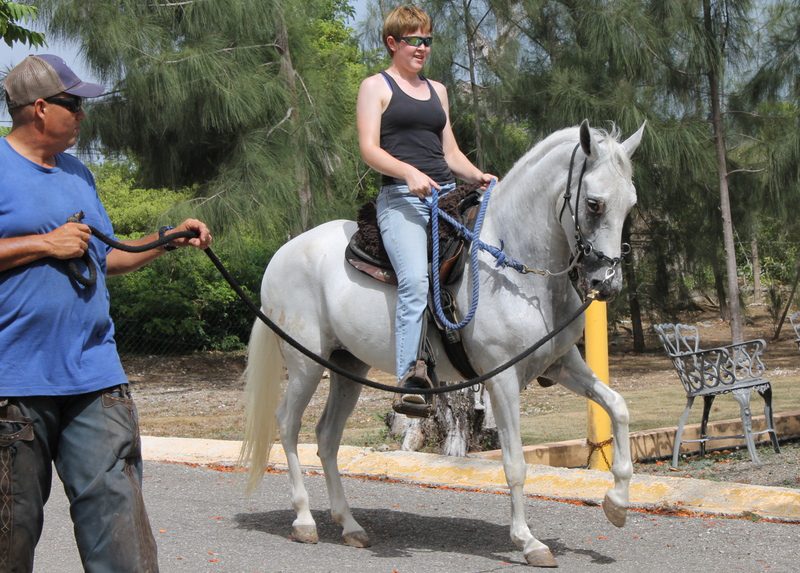 In the field, they kept the mare on a lead while my daughter rode, but once in the ring, they set her free. 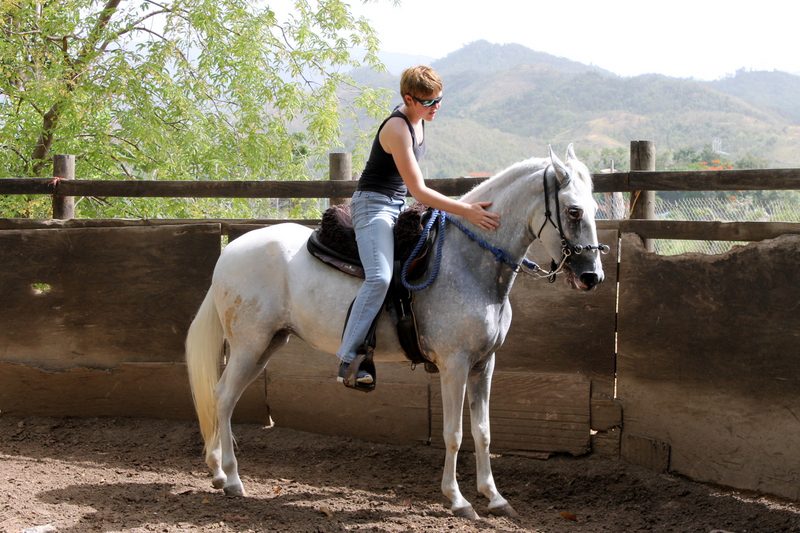 Only the manager and the owner rode this horse, the manager told me, openly impressed with her easy confidence, and this was the first time a female had ever ridden her. 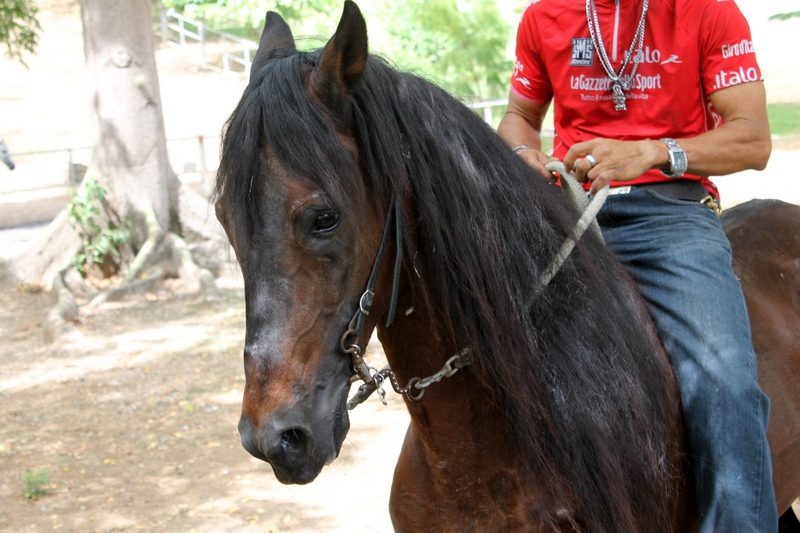 They brought out another Paso Fino then, this one a stallion, the son of a world champion and grandson of the infamous Terremoto de Manizales of Columbia.

“This is like a wine tasting, but with horses,” I joked. 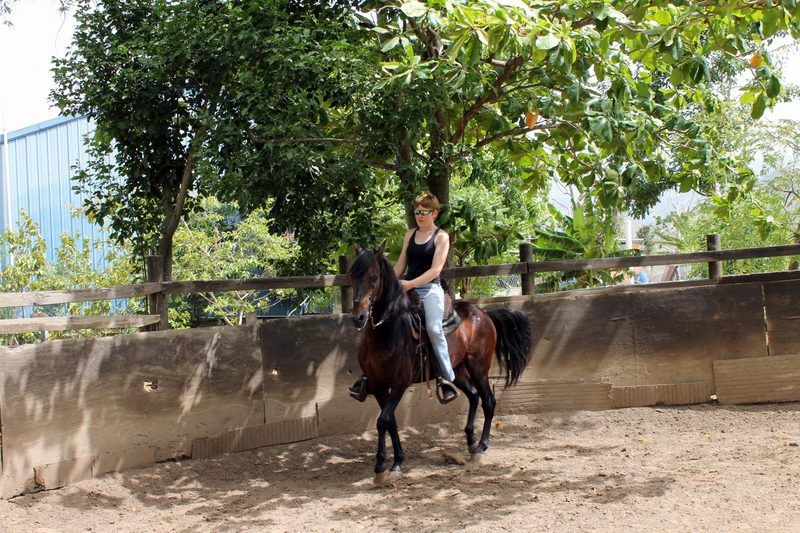 To me, the horse seemed frightfully high strung, but my daughter didn’t appear fazed so I took my cues from her and played it cool. 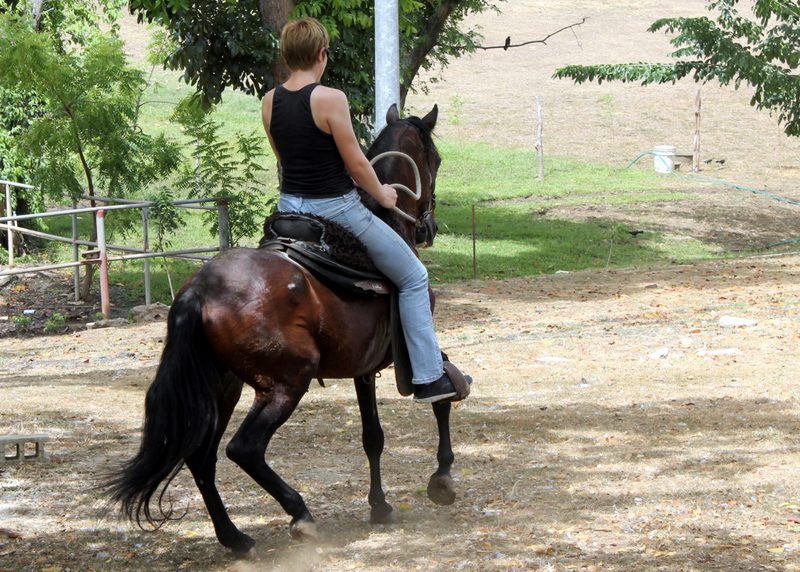 After a few minutes, they opened the gate and my daughter took the horse down to the wooden boardwalk, or resonance board, that is used to amplify the hoofbeats. (Check out this clip, starting at the 30-second mark.) The horse kept walking sideways, its rear listing to the right. 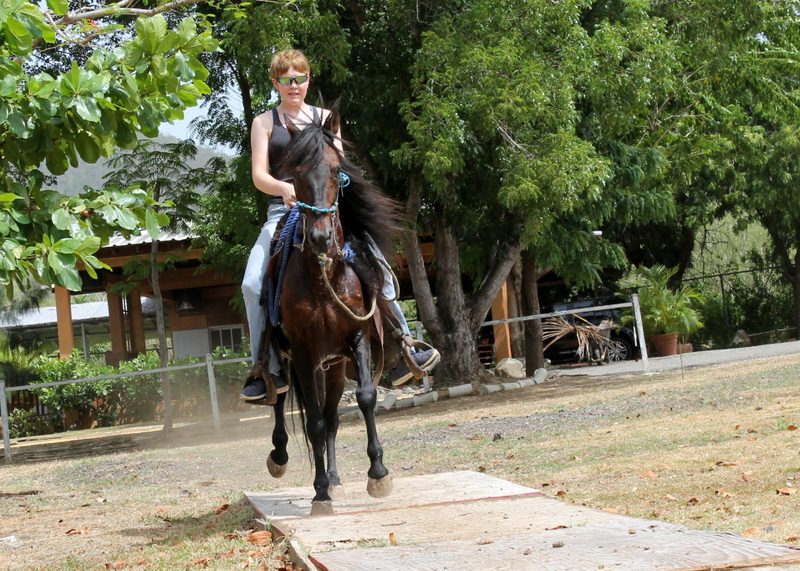 What am I doing wrong? she wailed. Nothing, the manager assured her. It’s just that he hasn’t been ridden much in the last couple years. But it helped a little when they told her to tug the reins from side to side. 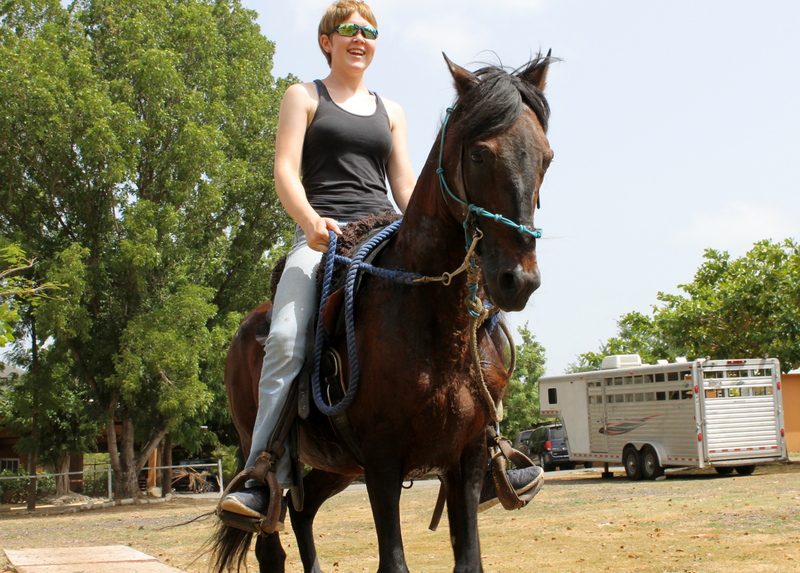 After she dismounted, they demonstrated how to work a horse to correct an imbalance: pull the neck to the right (watch out he doesn’t bite your leg!) and then release, over and over again. 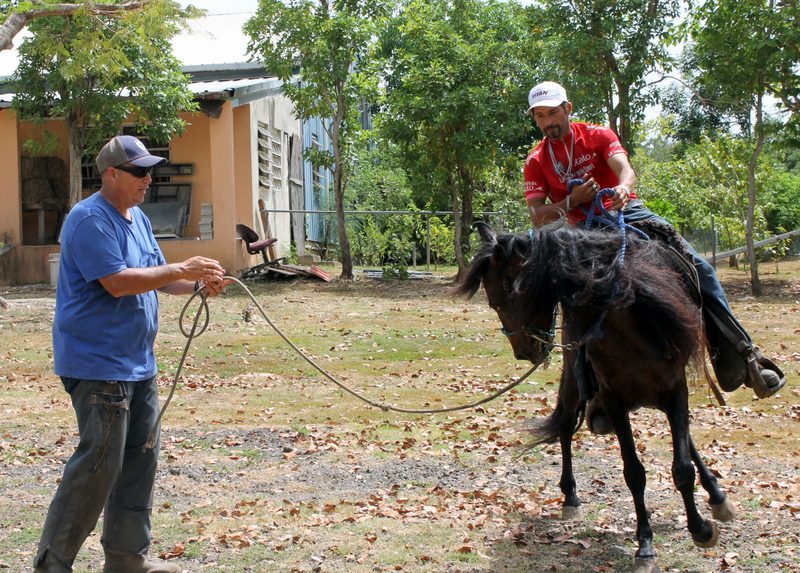 Afterwards, we walked through the stalls, admiring the horses and holding kittens. 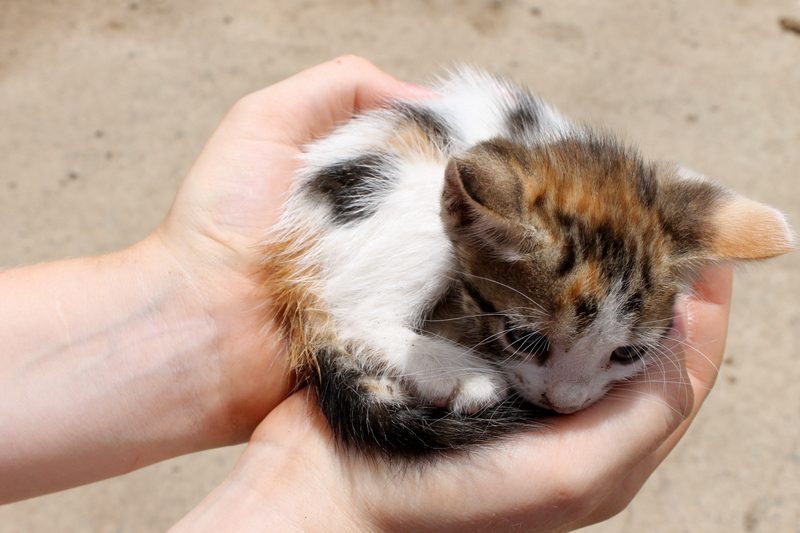 And then, as if an entire morning of riding horses wasn’t gift enough, the farm owner pulled out ham sandwiches and cold drinks, and we stood around visiting for another half hour in the breezy, open-air patio.