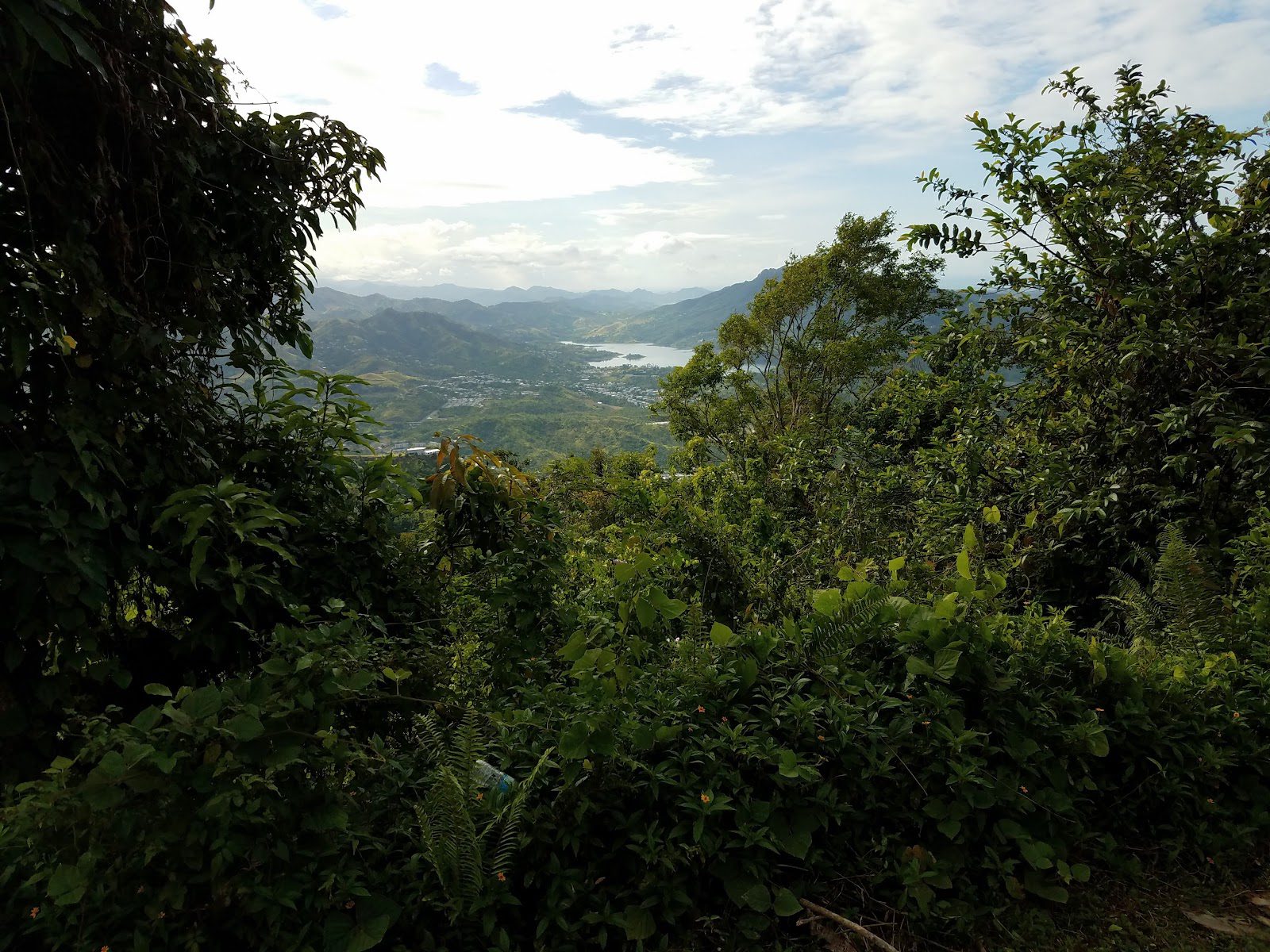 A few weeks back, someone I’d met through our relief work told me about a ceremony commemorating two nationalists who’d been murdered by the police forty years ago. Every July 25, a bunch of people gather up in the mountains where the murders happened. You ought to come, he said.

So Wednesday I kept my kids (and my daughter’s friend who is visiting for two weeks) home from work. We’d go on a little field trip, I said. Experience Puerto Rican politics firsthand. We filled water bottles, grabbed a bunch of bananas, and took off for the mountains.

Driving north, I raved at the ragged mountains jutting skyward. How does anyone live up there, I exclaimed, pointing out the houses perched on the sides of the impossibly steep hillsides.

The kids were nonplussed. Mom, WATCH THE ROAD.

And then, suddenly, the road narrowed and we started climbing.

My older son was navigating (or “nagivating,” as my younger son says), and when Google maps ordered us to turn left, we did. 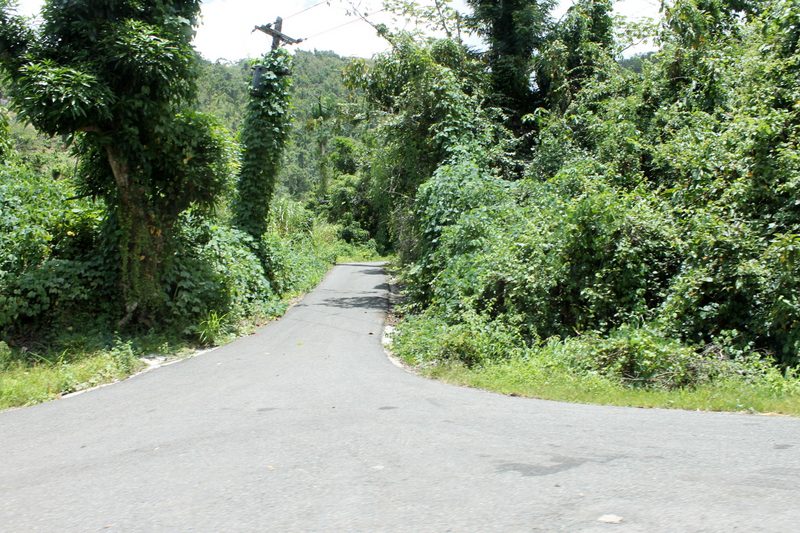 If driving in Puerto Rico and you spy this road, DO NOT TAKE IT.

The road narrowed even more — it was barely the width of the van — and grew increasingly steep and curvy, with a drop-off on one side. I hunched rigidly over the wheel, my eyes glued to the road, acutely aware that one wrong move and we’d go tumbling. And then the road turned so steep that we actually started to slide. I pressed forward — where else could I go?  — the tires caught, and up, up, up we went. The ground leveled a little, and I pulled to a stop.

I felt half sick to my stomach. Dizzy, too. There was no way we could keep going — this had to be the wrong way — but could the van make it back down? What if another car came up? And hadn’t the brakes seemed a little soft recently?

Those impossible mountain houses we were admiring at the start of the trip? We were parked in front of one. A young girl came out of the house and told me I needed to go back down — this was the wrong way.

I called my husband to inform him of our predicament. 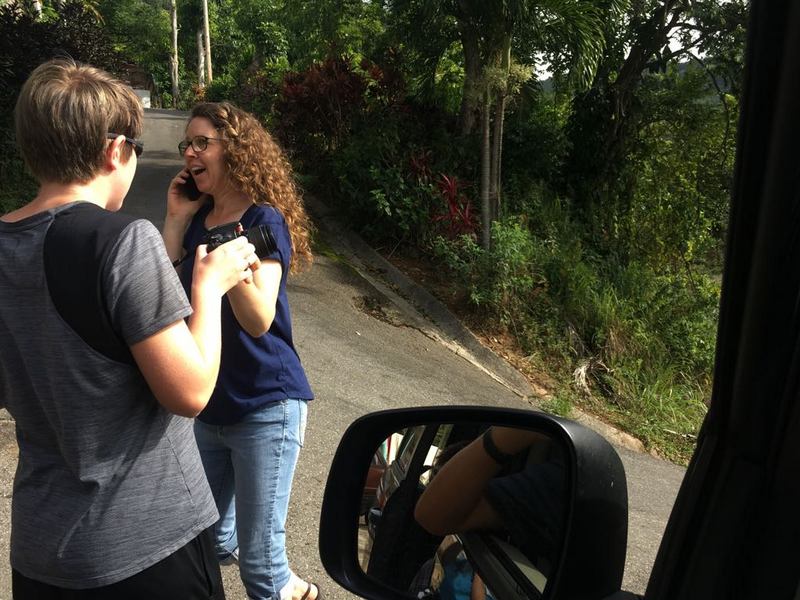 Even thought I didn’t say it, the call was also sort of a Last Phone Call Before Dying thing, just politely giving him a little heads up before his entire family disappeared off the side of the mountain.

My older son took over the driving, inching the car down to the next house, the rest of us walking, too nervous to ride. 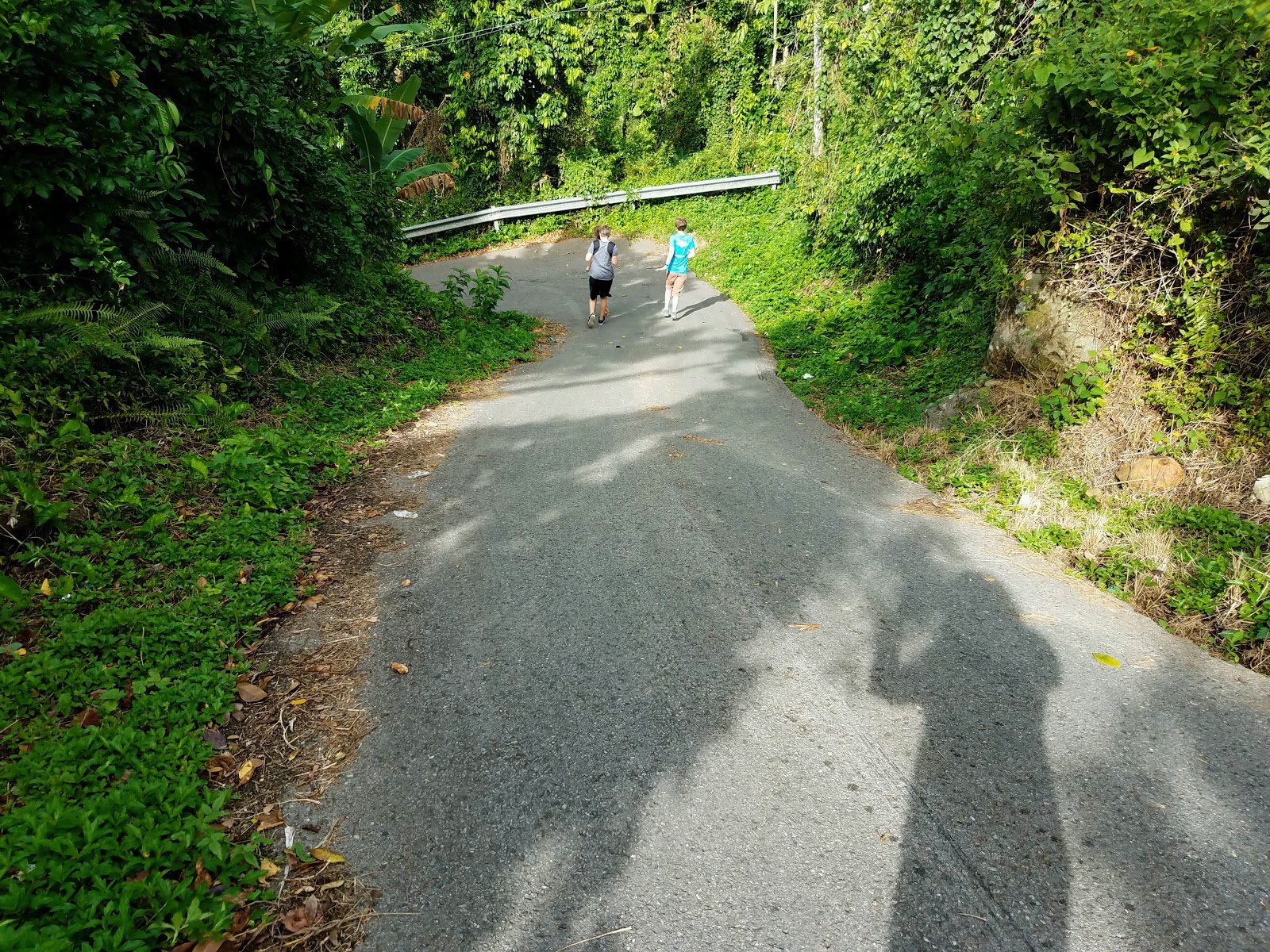 At that house, I spoke to a man working on a construction project (how in the world did he get building materials up there in the first place?), and he said the map was forever sending people up the wrong way. As we spoke, a car pulled up and stopped (“he’s lost” the man chuckled); when it tried to move forward, the tires just spun uselessly — it had to reverse down the hill.

We eventually got back to the right road — twice as wide and a lot less steep but still fairly terrifying — and journeyed on, stopping whenever the roads diverged to confirm with an actual person that we were indeed heading the right way.

And then, suddenly, we went round a turn and there were cars lining both sides of the road — we’d made it! 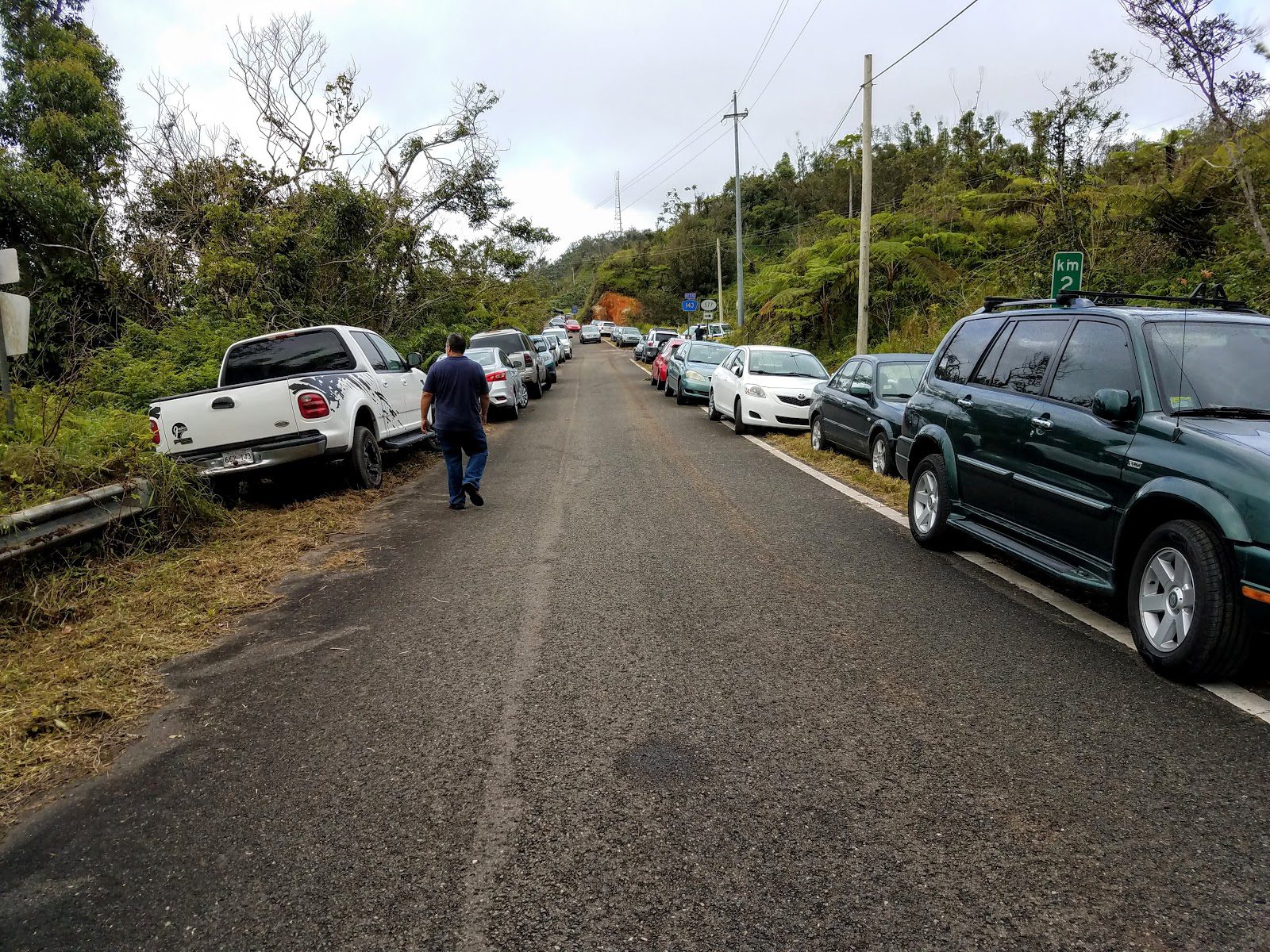 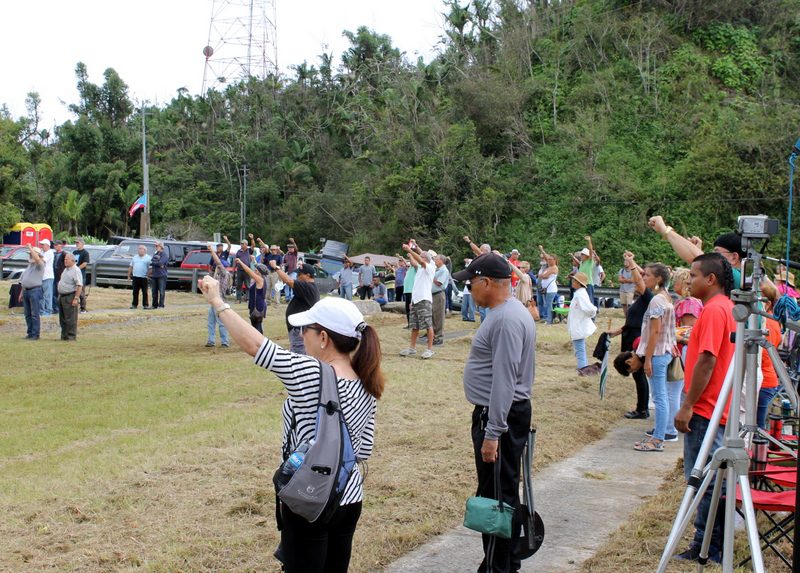 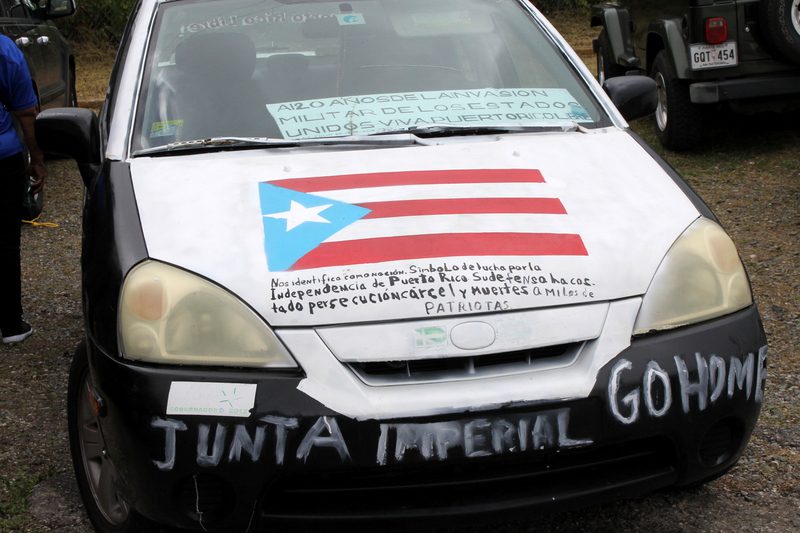 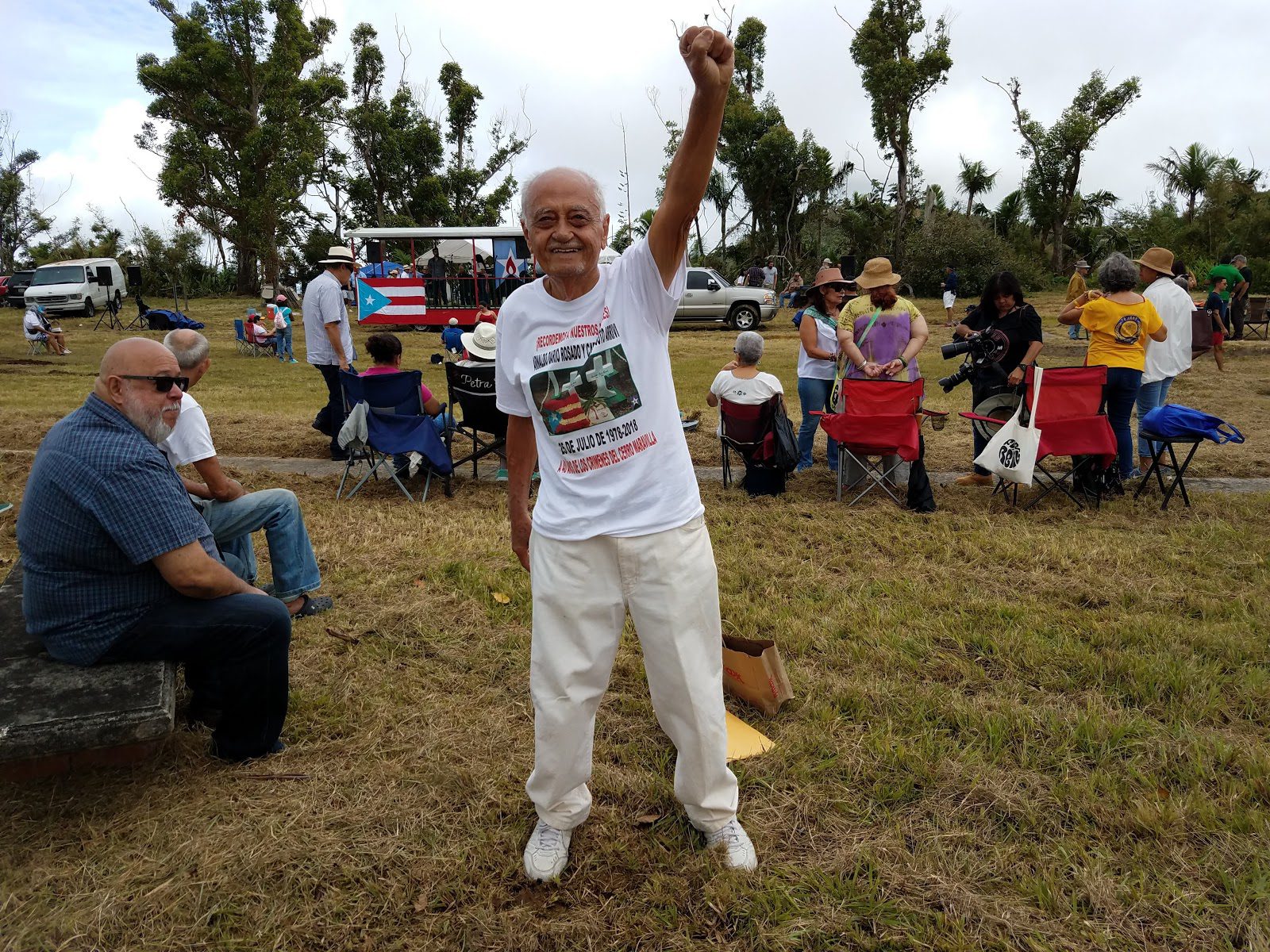 A few hundred people were milling around in a flat — FLAT! — field, and for the next couple hours we listened to speeches and songs. My friend was there and he introduced me to different people (like him, they’d also been imprisoned, he said), and when it rained, he pulled us under the tarp where he was doing the recording for the organization’s live Facebook feed. 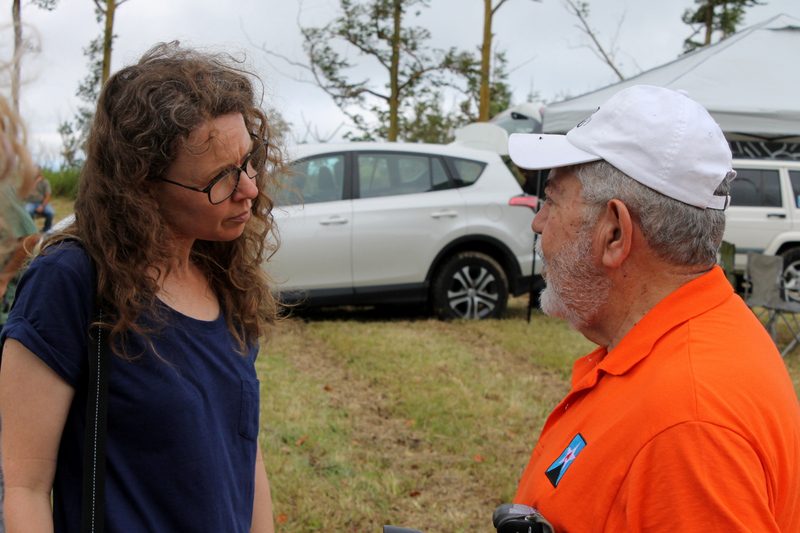 He also gave us their next year’s calendar celebrating the women nationalists; the celebration’s guest of honor was Providencia “Pupa” Trabal; the kids wanted to get her to autograph the calendar, but when we tried to track her down, she’d already disappeared. 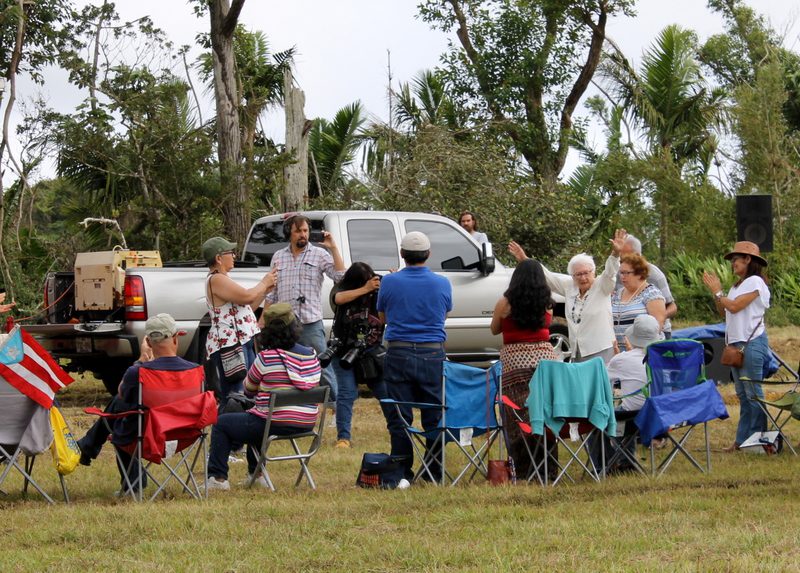 The kids and I walked up to the radio towers where the two men were shot. While we walked, I explained fragments of the story to the kids, and summarized some of what the different speakers had said. 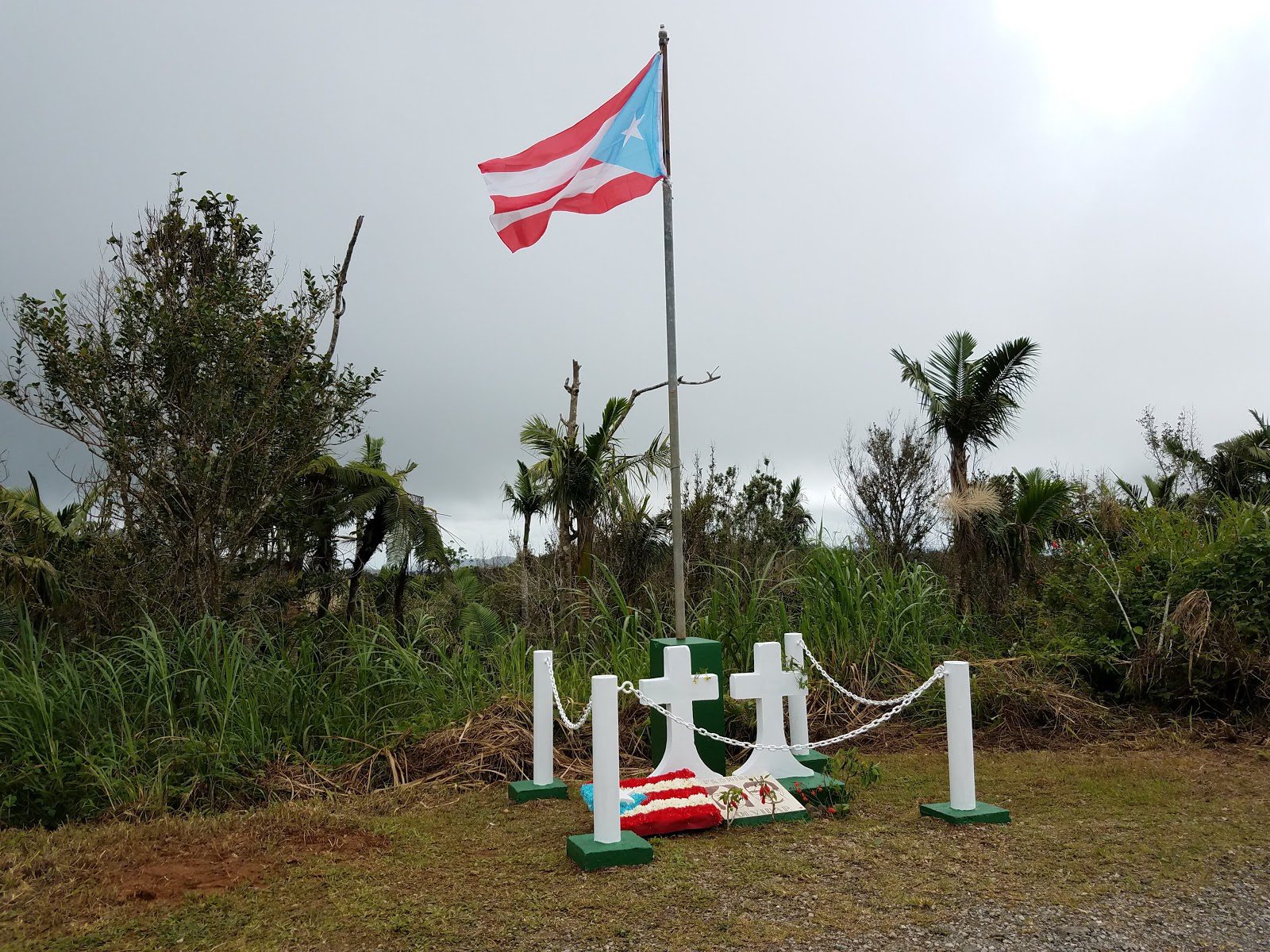 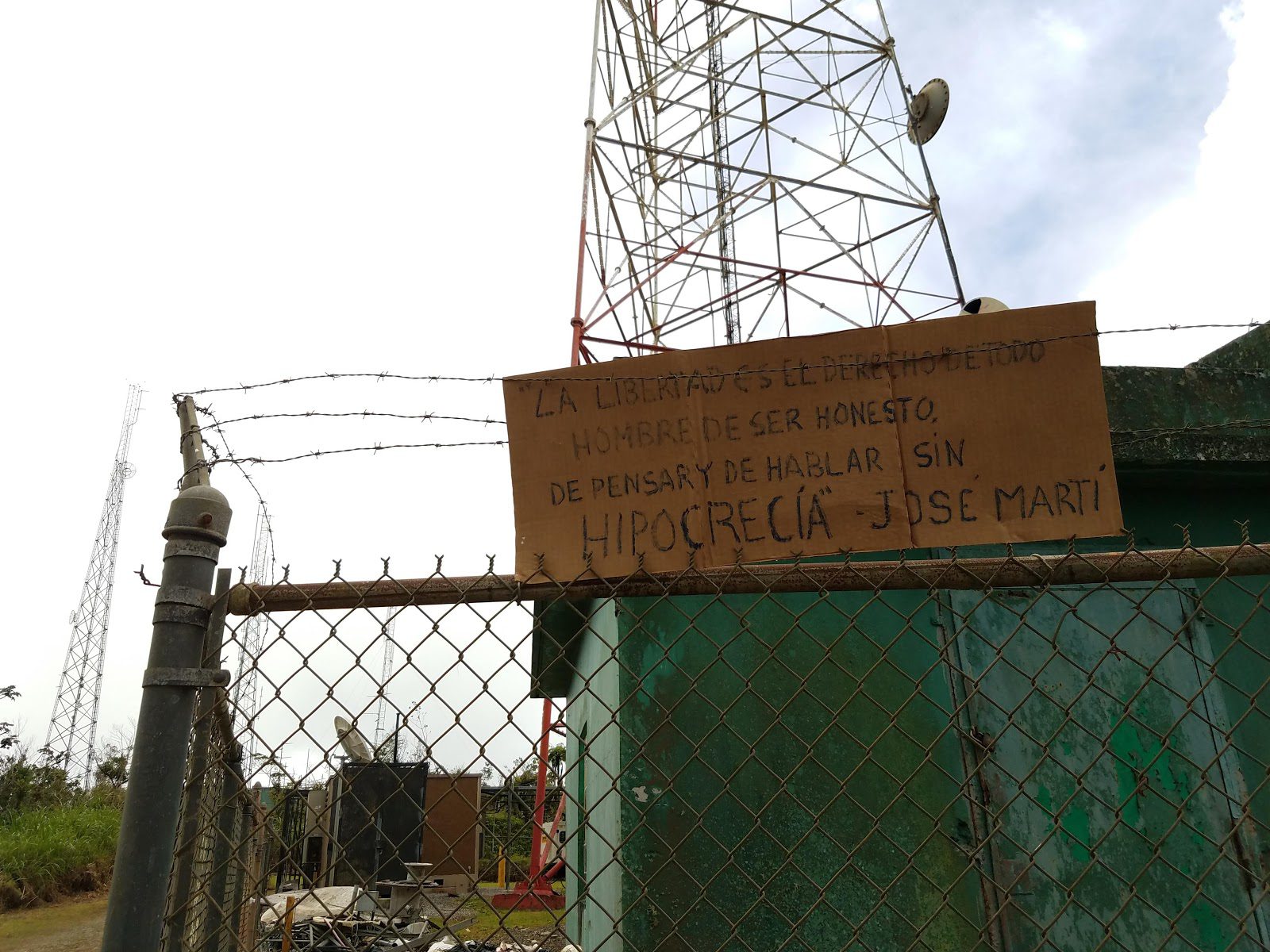 “Freedom is the right of every man to be honest, to think and speak without hypocrisy.” Jose Marti

At 4000 feet, the view was superb. We could clearly see Ponce — the 52, our church’s neighborhood, the port, the river. 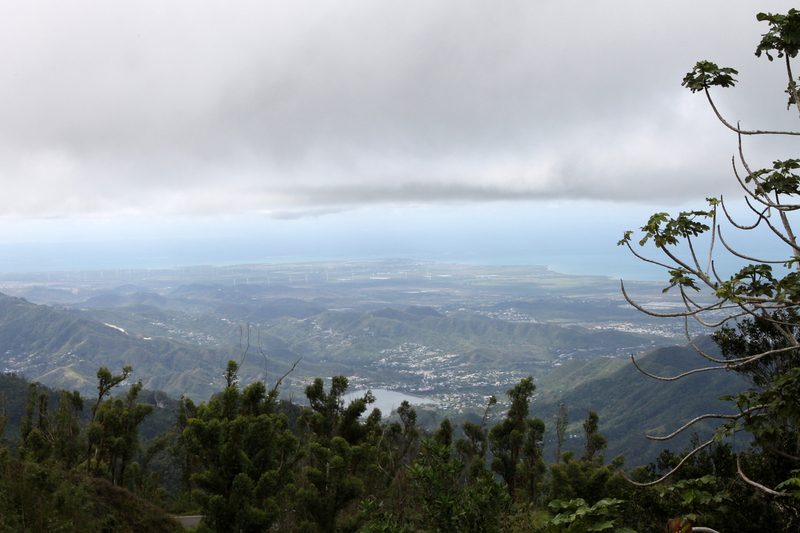 one of the views, though you can’t see Ponce (off to the right) in this photo

The kids were fighting though. Tired and hungry, we struck out for home. 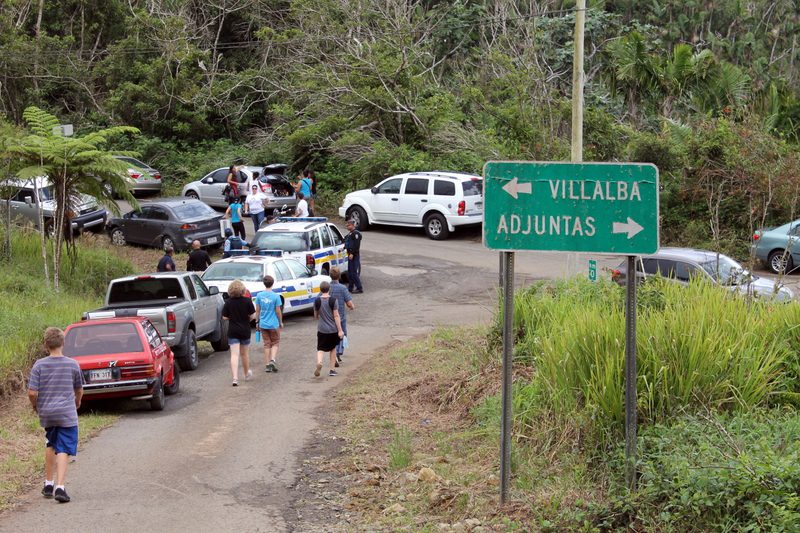 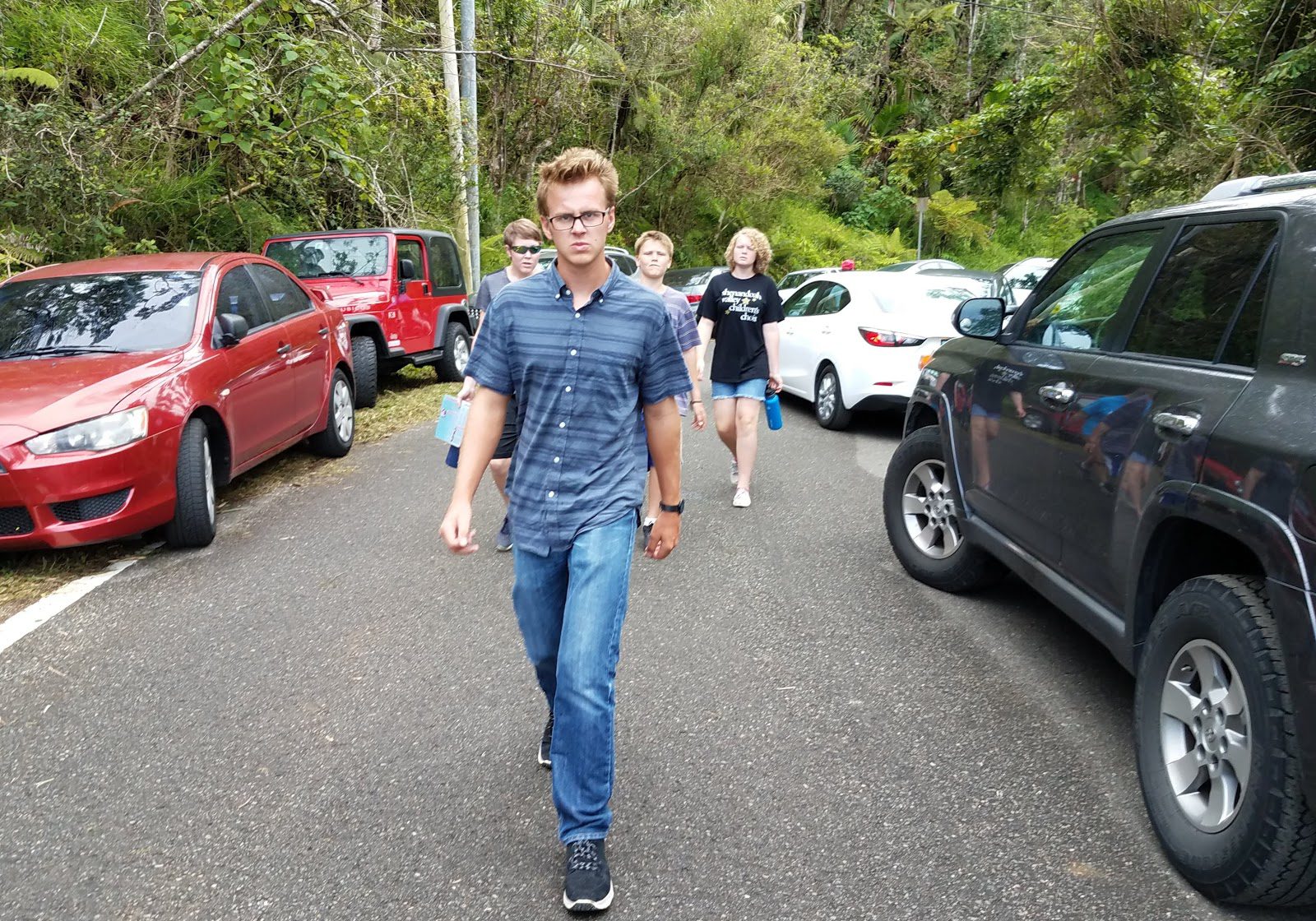 I’d forgotten to bring cash and only had six dollars in my bag. At a roadside eatery I bought a bag of anise-scented, raisin-studded sweet buns — just enough to take the edge off their hunger. 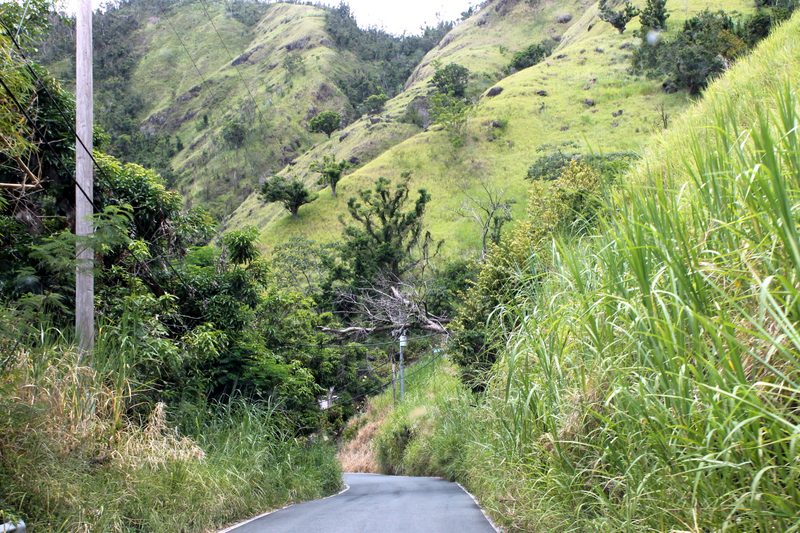 My son drove the whole way back, pulling over every now and then so we could take photos of the houses built out over the edge of nothing. 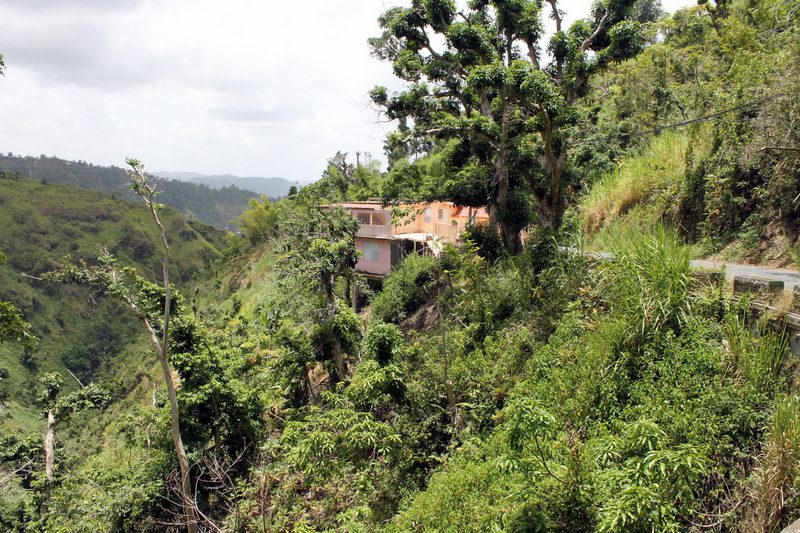 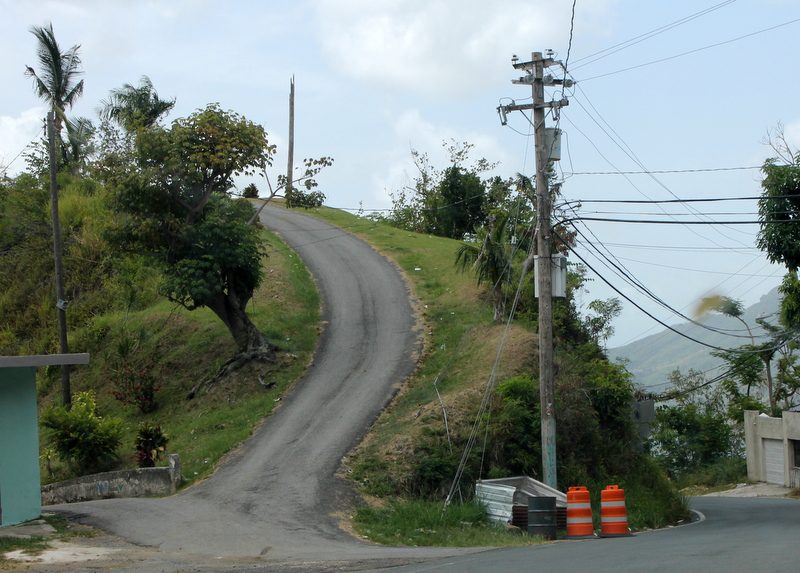 One of the many, MANY ridiculously steep driveways.
(I keep thinking, “What do they do when it snows?” Ha.) 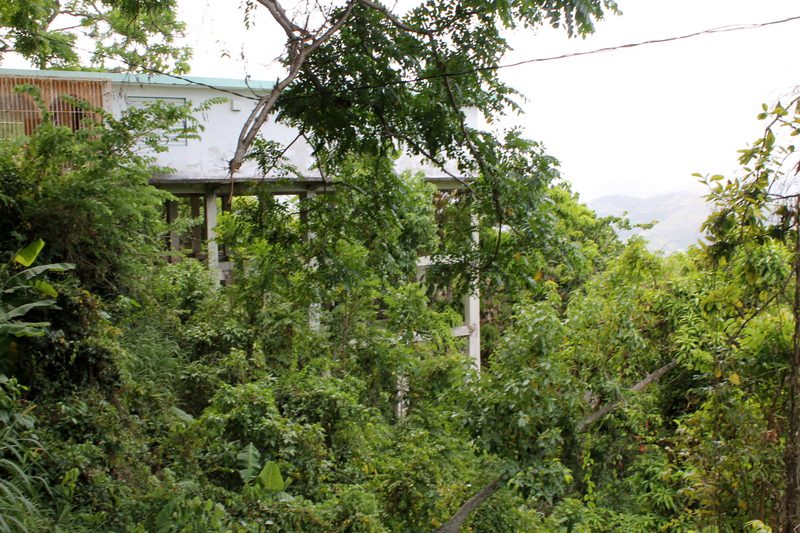 Further reading:
*About the murders.
*”In Puerto Rico, July is the cruelest month.” (Huffington Post, 2015)
*It’s been 120 years since the US invaded Puerto Rico. (NPR, a few days ago)
*Blackout. (An NPR and PBS report.)