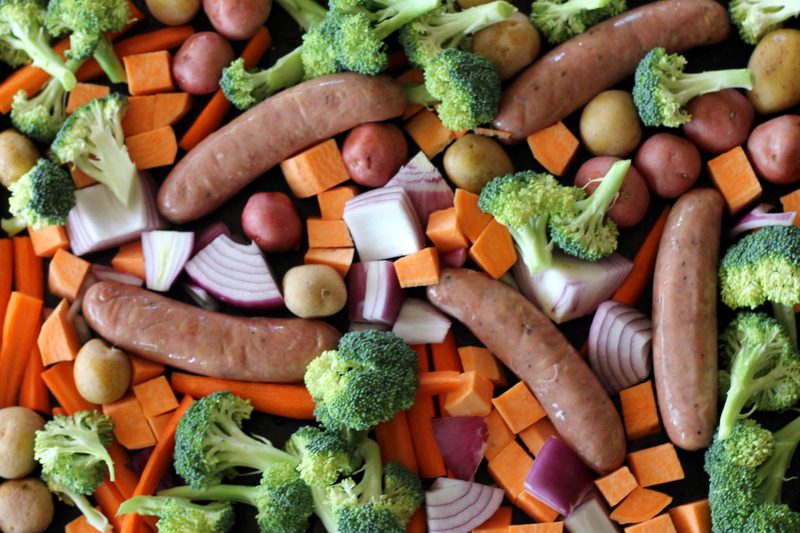 I recently discovered the easiest fancy dinner ever: roasted veggies with sausage. I’ve already made it, oh, three or four times, and within as many weeks.

Mid-afternoon, I dig through the fridge, pulling out whatever veggies are rolling around in there: broccoli, carrots, a red onion. I fetch potatoes, both sweet and white, from the back hall. In the kitchen, I peel and rough chop everything, drizzle them with plenty of olive oil and then tumble them onto a sided baking sheet and sprinkle with lots of salt and black pepper. Usually, I get carried away and have to use two, sometimes three, baking sheets. The important thing is to not overcrowd the pan.

I nestle a half dozen sausages in amongst the veggies and roast the whole thing in a blistering hot oven for about thirty minutes. The last ten minutes, I halve a lemon and place the pieces, cut-side down, on the baking sheet, and then, right before serving, I squeeze the hot lemon juice over everything and season with more salt and pepper. 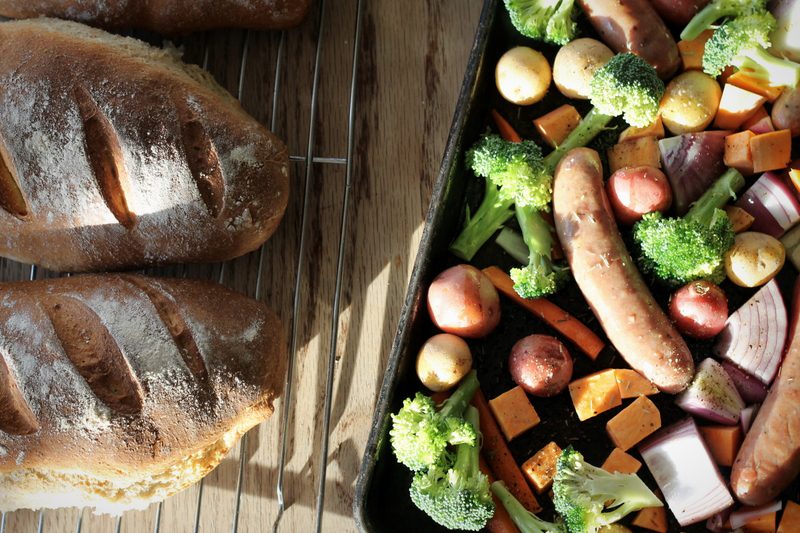 The meal is a slam dunk every time. What with all the variety and bright colors and flavors, it feels celebratory. Add a loaf of fresh bread and it’s a downright feast. 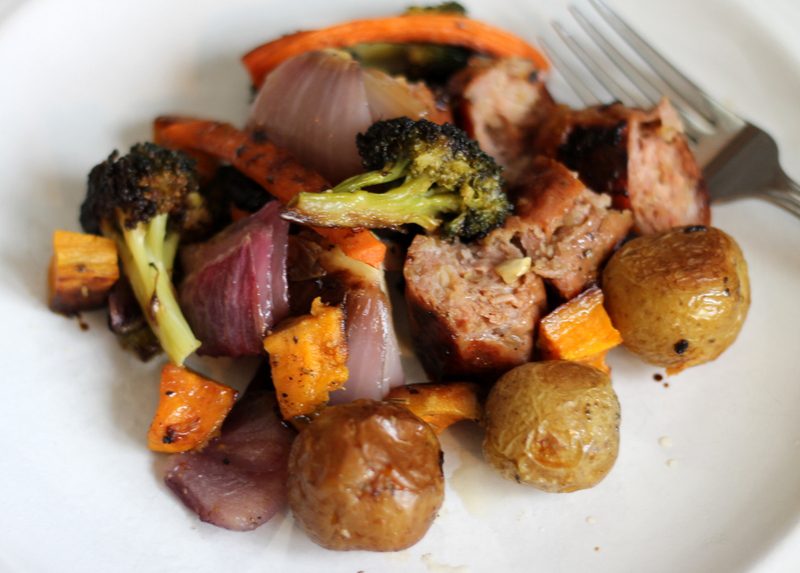 Other vegetable options include brussel sprouts, butternut squash, cauliflower, beets (though they’d probably discolor the other food), cabbage, etc. More variations: Add fresh herbs, such as rosemary or thyme, or toss in some garlic and red pepper. Maybe try roasting some fruit, too — fresh figs and apples, would probably be nice. The key is to cut the veggies the same size so they roast at the same speed.

We’ve tried different sausages but Sweet Italian is our favorite.

If roasting the veggies in shifts, simply pile all the roasted vegetables and sausages together — both the ones that have cooled to room temperature and the fresh hot ones — and return to the oven for ten minutes to heat through before serving.

Toss the veggies with plenty of olive oil and salt and pepper. Tumble into a sided baking sheet. Nestle the sausage links amongst the vegetables. Roast at 400 degrees for 20-30 minutes, stirring every ten. The last ten minutes of baking, cut the lemon in half and put cut-side down on the baking tray — the heat helps the lemon release all of its juice.

The meal is ready when the sausages are golden brown and swollen fat and the veggies are fork-tender and blackened around the edges. Remove from the oven, squeeze the hot lemon over everything, and season with more salt and pepper. Serve immediately.