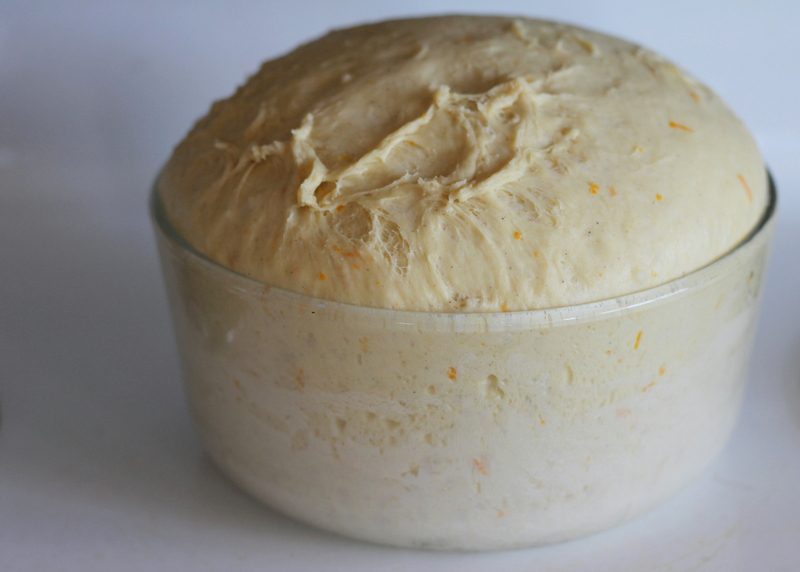 Are you gearing up for some weekend baking? If so, might I suggest these simple, yet elegant, buns?

Kanelbullar, they’re called. But since I can’t pronounce it very well — and even if I could, no one would know what I was talking about — I just call them sweet buns. Or maybe cardamom twists? Sugar knots? I don’t know. Maybe, come to think of it, I don’t call them anything. I just eat them (licks lips). 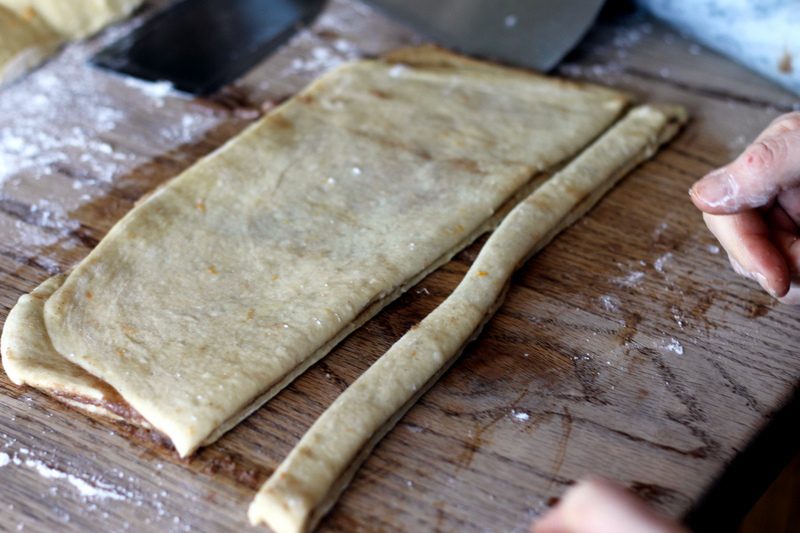 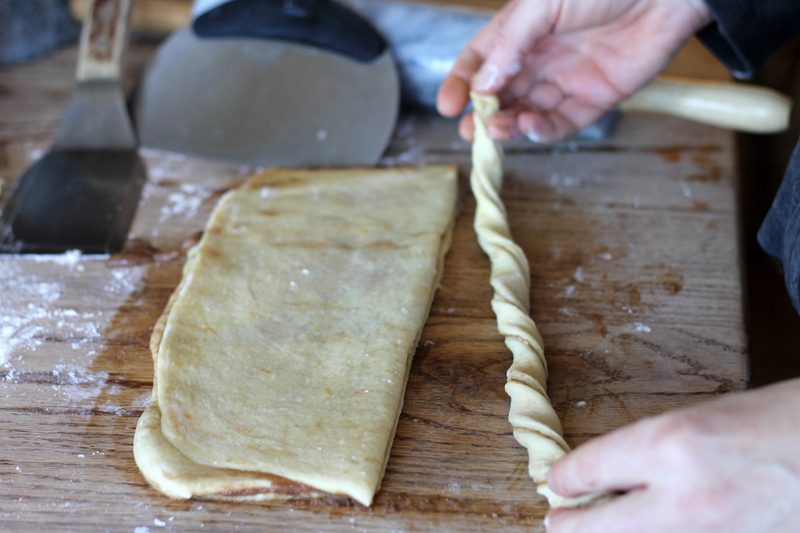 I’m kind of infatuated with them, really. They are like cinnamon buns but more sophisticated and constrained: Instead of a finger-licking icing, just a few crunchy sugar crystals. Instead of the singular taste of cinnamon and sugar-sugar-sugar, the more nuanced flavors of orange zest, cardamom, and vanilla. Instead of a sticky mess that requires either a multitude of napkins or else a fork and plate (or running water and a sink), a tidy, self-contained treat. 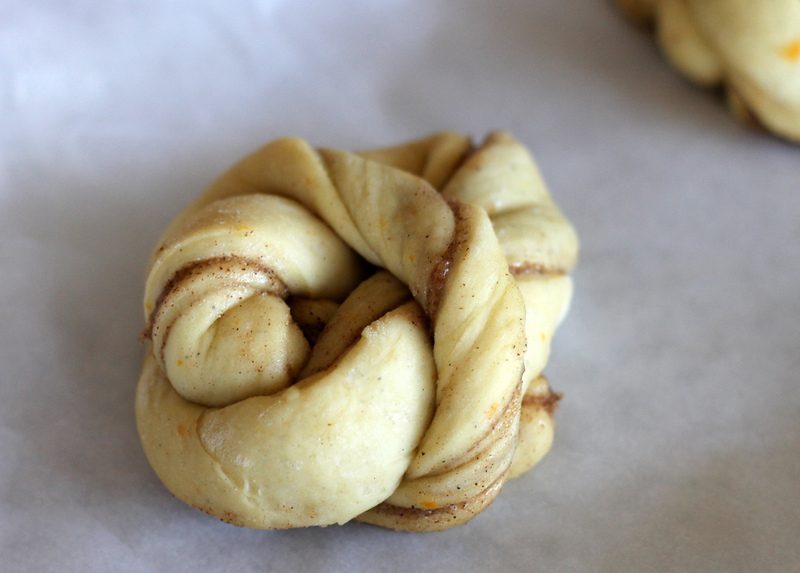 If we were comparing bread to people, then regular cinnamon buns would be your blowsy, big-bosomed mum with a bad perm (whom you love dearly) while these buns would be your slender, long-legged ex-ballerina aunt with high cheekbones and a tight bun at the nape of her neck. 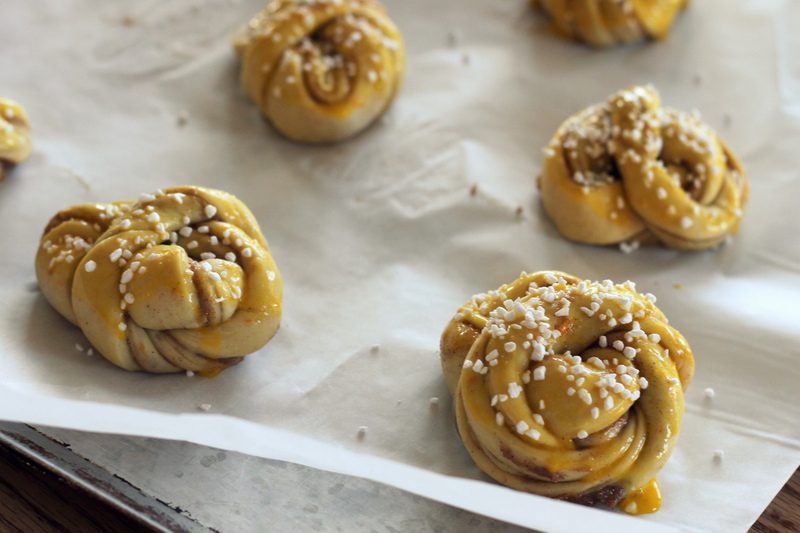 I’ve made these three times. I experimented with a chocolate babka-like variation, but that didn’t go over so well — too dry — and decided that I much preferred the traditional flavors. 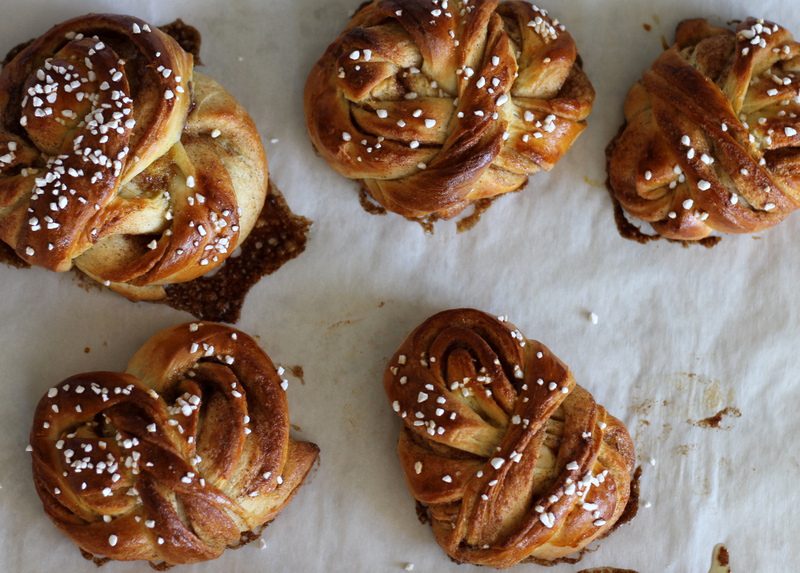 Julie says these could also go savory, with pesto as the filling, perhaps, or simply garlic and parmesan, to make a sort of garlic knot.

These are quite similar to the Cardamom Orange Buns that I’ve already written about. (I didn’t realize it until just now, oops.) Those buns are from Finland, and the recipe calls for two tablespoons of cardamom. In these buns, the cardamom is rather mild, so feel free to double, even triple, the amount.

Put the warm milk into the bowl of a kitchen aid mixer and sprinkle with the yeast. Once the yeast has bloomed, add three cups of flour and the remaining ingredients. Using the dough hook attachment, mix on medium-low speed until tacky and soft. Add the remaining half cup of flour and mix briefly.

Turn the dough out onto a floured surface and lightly knead, taking care not to use any more flour than necessary. The dough should be manageable, but just barely. Place the dough into a lightly buttered bowl and cover with plastic. Let rise until double.

Using a fork, mash the butter with the sugar and cinnamon to create a thick paste. Divide the filling between the two rectangles of dough and spread evenly.

Fold the dough into thirds, like a letter, and gently roll it back out until it’s about 8×12 inches. This sounds confusing, I know, so think of it this way: You are going to be cutting the dough into long strips, as you would cut pastry for a pie lattice. There will be eight strips, more or less, each one about 12 inches long.

Now, cut the dough into strips. Twist them into long curly-cues, and then wind each twisted strip over your fingers as though you’re coiling electrical wires. (Here’s a little video.) Tuck the end of the strip through the middle and set the bun on a parchment-lined baking tray with the ends on the bottom. It’s way easier to do than it is to explain, and the buns are forgiving, baking up beautifully no matter how sloppy the twist. Brush the buns with the beaten egg and sprinkle with pearl sugar.

Let the buns rest at room temperature for 15-30 minutes before baking at 350 degrees for 15-20 minutes. Serve warm.

Leftover buns can be frozen and then thawed and briefly reheated.

P.S. After yet another wearisome day filled with our president’s filth and hate, this message of kindness, respect, and hope is a much-needed balm.