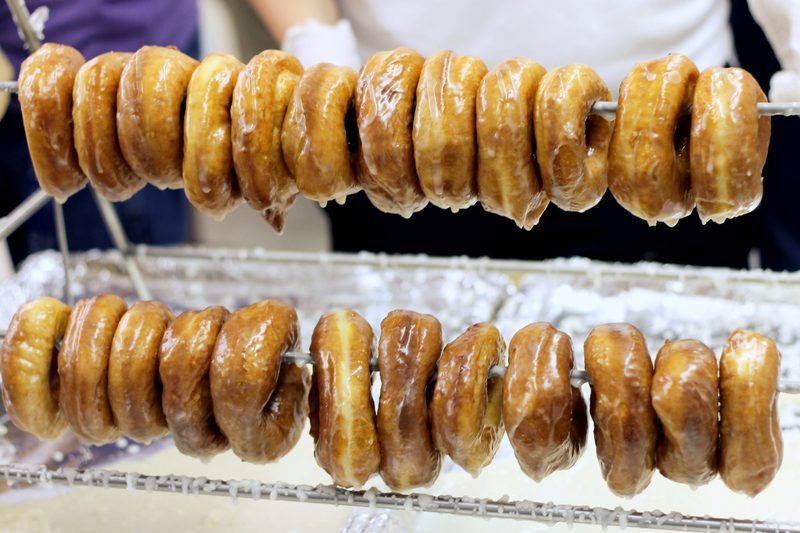 As I mentioned before, my husband and I agreed to take over the homemade donut stand at the Virginia Mennonite Relief Sale. The sale was this past weekend.

Over the last ten months, I’ve messed around with recipes, run numbers, had several meetings with the previous donut-makers, pored over the three-ring binder of detailed photos and instructions that they so thoughtfully created for us, made lists, checked them twice and thrice, and, after much agonizing, placed the final order for ingredients.

A couple weeks ago, my husband I did a preliminary walk-through of the donut-making spot: the Ruritan club’s chicken shack at the fairgrounds (where the relief sale is held). It was not encouraging. Low ceilings, uneven concrete floors, a row of fryers (I’ve never even seen a fryer up close), several Pepsi machines, a few rickety tables. How in the world…???

And then I started not sleeping. I’d wake up in the middle of the night and think, “We need 140 pounds of mashed potatoes but we’re only making 35 recipes. That can’t be right!” and then I’d struggle with mental math for a very long and entirely unproductive time. In the morning, I’d be like, four pounds of mashed potatoes times 35 is 140, duh. Finally, for the last three nights leading up to the sale, I resorted to Benedryl.

My husband took off work on Thursday and, after what might be the worst family stress-fight we’ve had in a long time, we all went out to the fairgrounds to begin setting up. We scrubbed the place down, laid donated carpet remnants (to facilitate clean-up), rearranged the room, hauled in the donut-making equipment that was stored on the relief sale truck, and washed supplies. 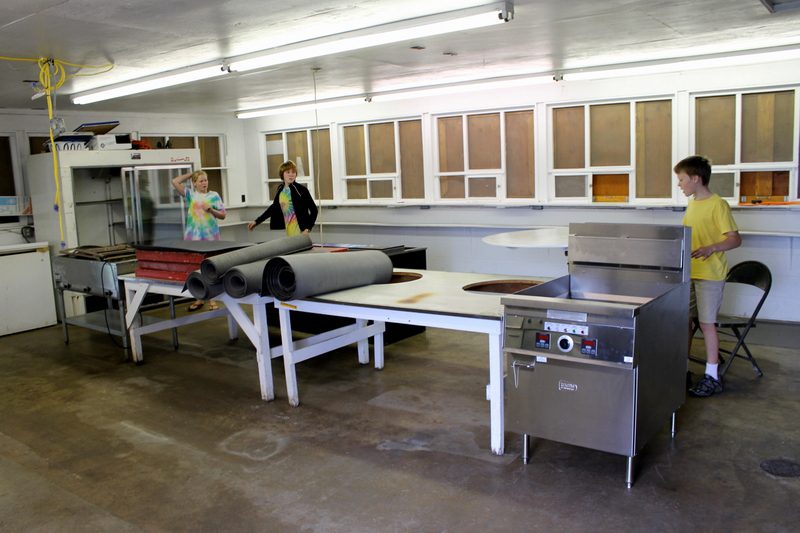 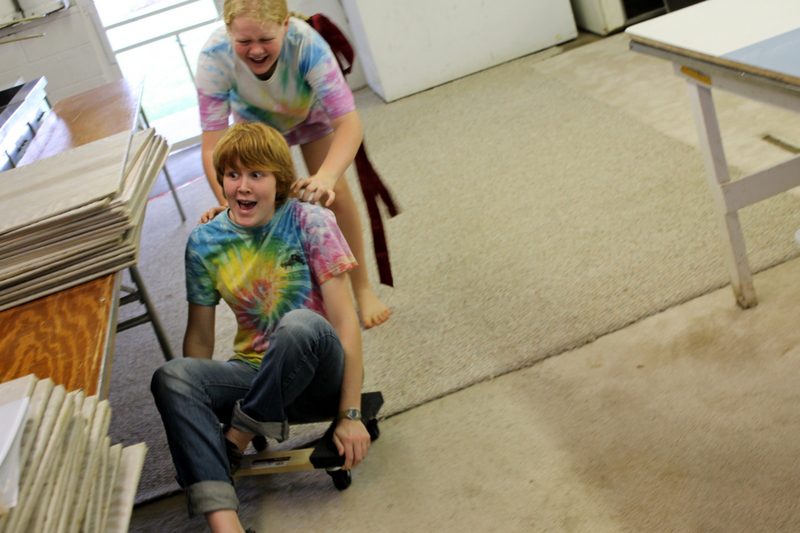 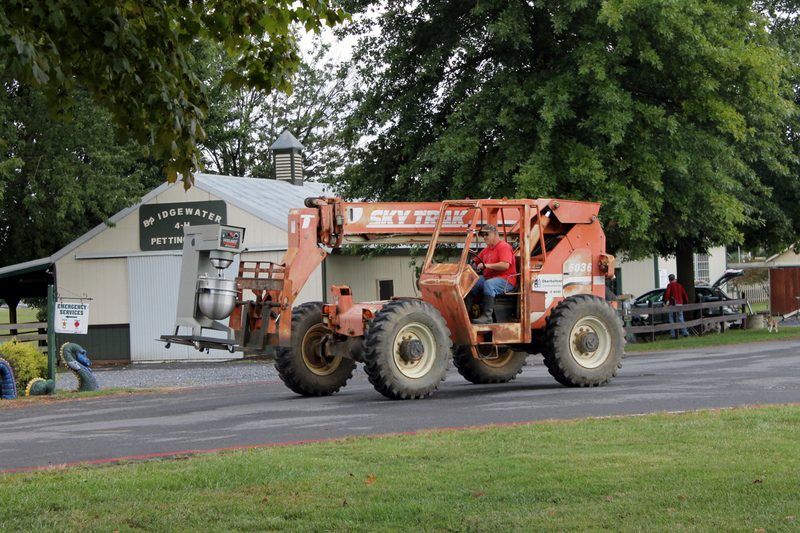 That evening we dropped the younger two children at my parents’ house (where they would stay for the next two nights before transferring to my friend’s house for the third night).

Friday morning, my husband and I, plus the two older kids, headed back out right for a full day of prep work. We finalized the room’s arrangement, and then the supplies started to arrive. Gallons of milk, cases of butter, cartons of eggs. 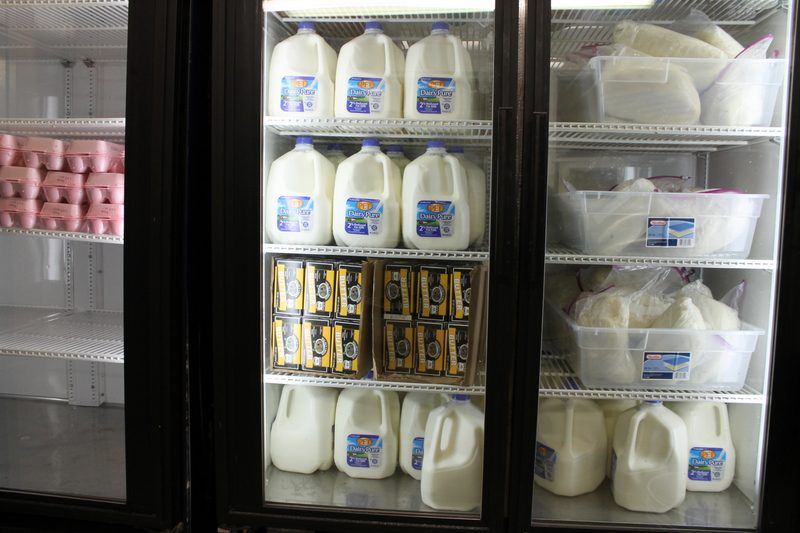 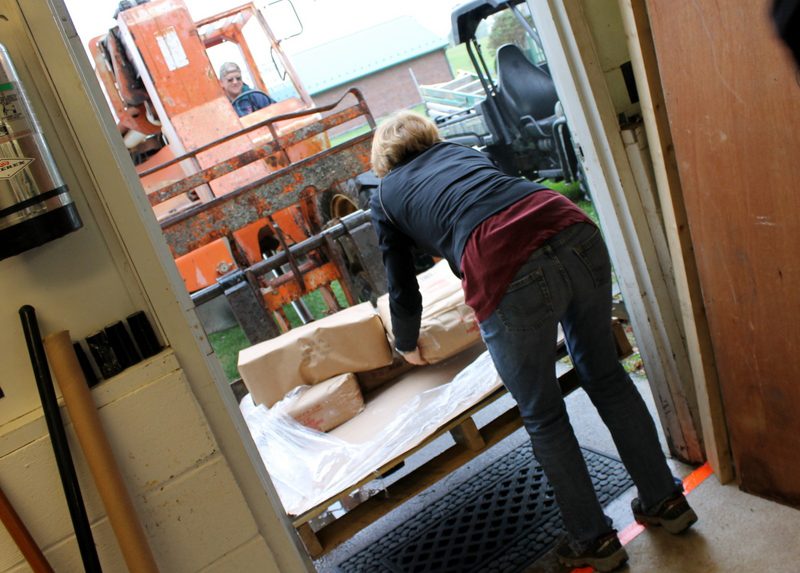 And the dry goods: 50-pound sacks of confectioner’s sugar, granulated sugar, vanilla, and mace. Except instead of the “three boxes of mace from the bulk food section of the store” that I had ordered, they sent three buckets of the stuff—you know, what the store gets and then repackages to sell. 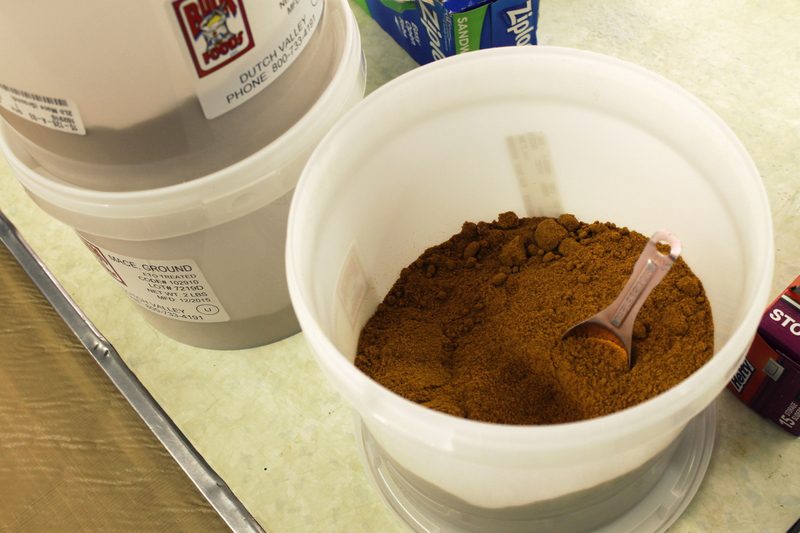 When the forklift of flour pulled up to the door, the mace mistake was still fresh on my mind, so I stopped one of the kids to double-check the label. Good thing I did, too, because they had sent 700 pounds of all-purpose flour instead of bread flour. The relief sale organizers flew into top gear, searching local stores for flour. They cleaned out a couple stores before finally finding a bulk food store that had the remaining six hundred pounds of bread flour in stock.

“They’re packaging it up in five-pound bags for you,” the volunteer announced triumphantly. “They might not be exact, but they’ll be close.”

My heart plummeted. Not exact? We had the recipe calculated to the ounce! It had to be accurate. But there was no point in saying anything. 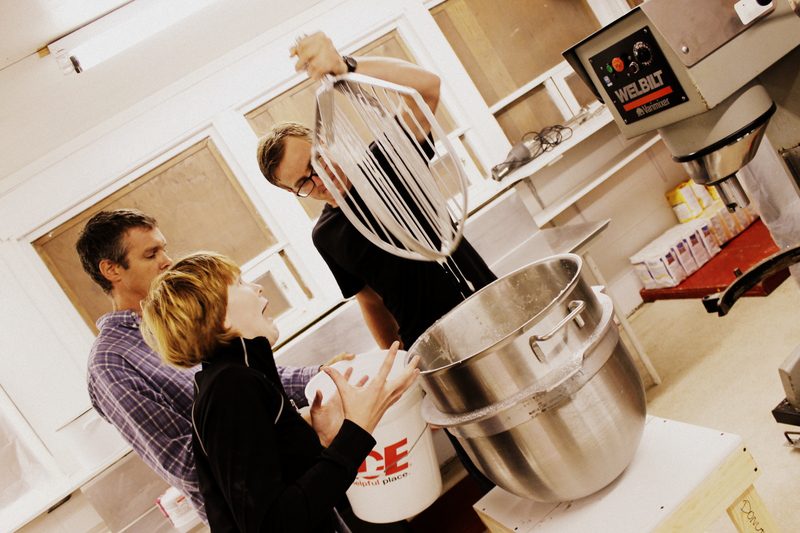 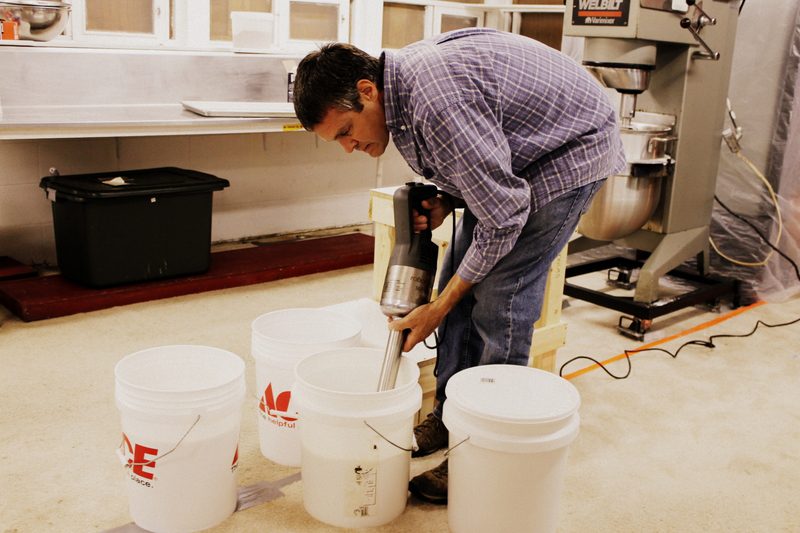 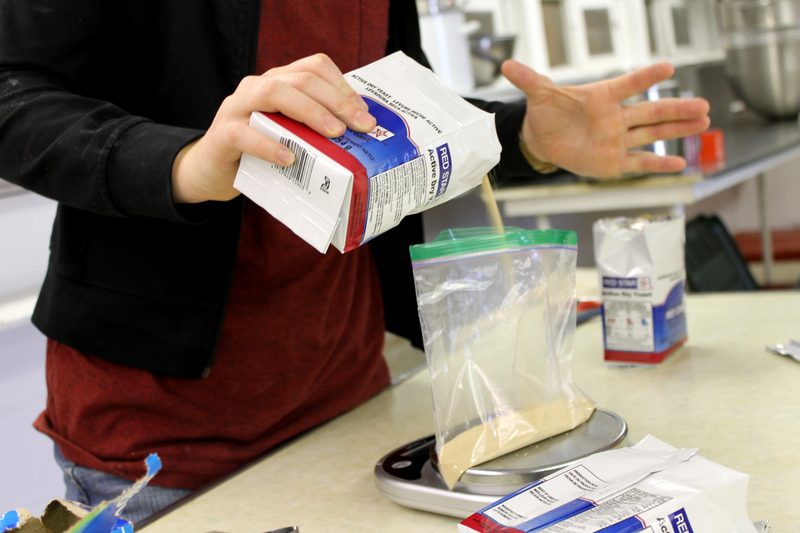 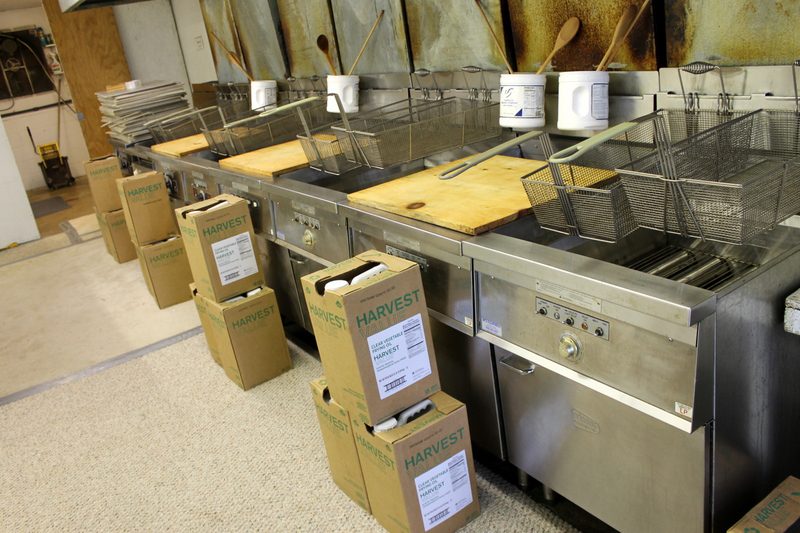 We spent the afternoon mixing the glaze and pre-measuring the sugar, yeast, and salt, wrapping everything up in good time. Yes, I thought. We can get in a good nap.

But then the flour arrived. I set a bag on the scale: 5 pounds 9 ounces.

“We’ll have to rebag it, all of it,” I announced wearily, and to my husband, I muttered, “I am so going to lose it.” 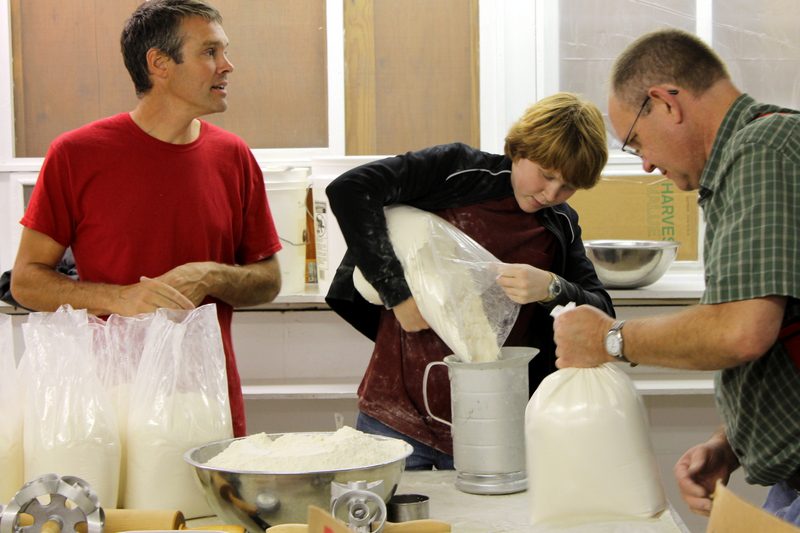 One of the relief sale workers overheard me. Without saying a word, he took off his coat, stepped up to the table, and for the next hour and a half, he twistied shut the remeasured bags. He did more than that, though. His presence prevented me from having a full-blown meltdown. Civil service, literally.

That evening, we went to bed at 8:30. We managed to actually fall asleep, but then the fire alarm went off … twice. Of all the nights! And then my son’s wake-up alarm went off at 11:48—some crazy nuclear siren type alarm—except he had hooked up his phone to his sound system so the beeping was heart-stoppingly loud. So much for sleep. “It’s not even tomorrow yet,” I said, pulling on my jeans.

We arrived at the fairgrounds soon after 1:00 am, and for the next 12 hours, we made donuts. It was an absolute blast. 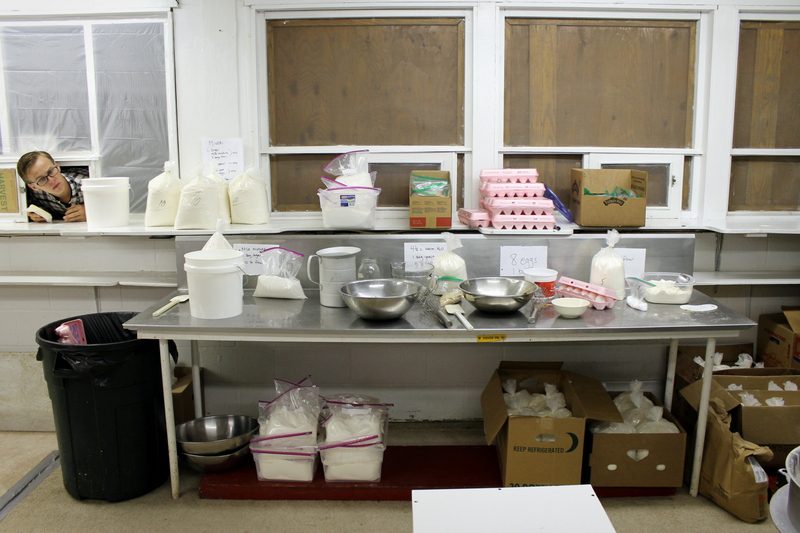 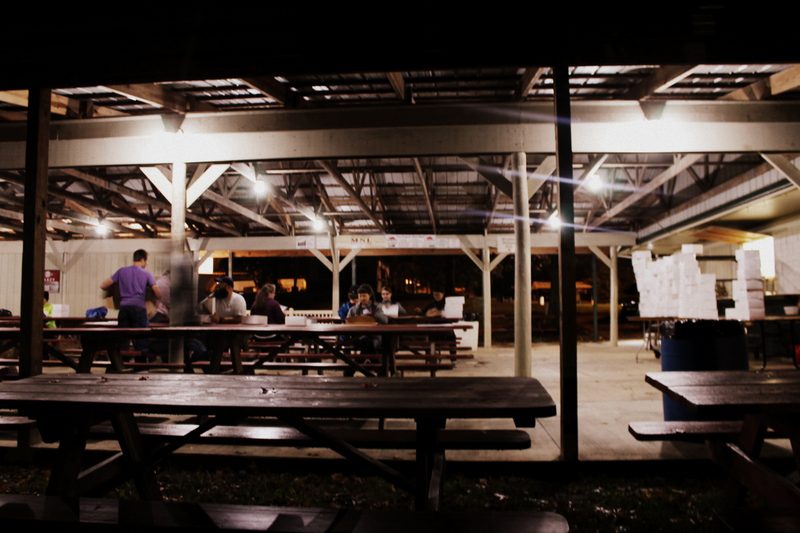 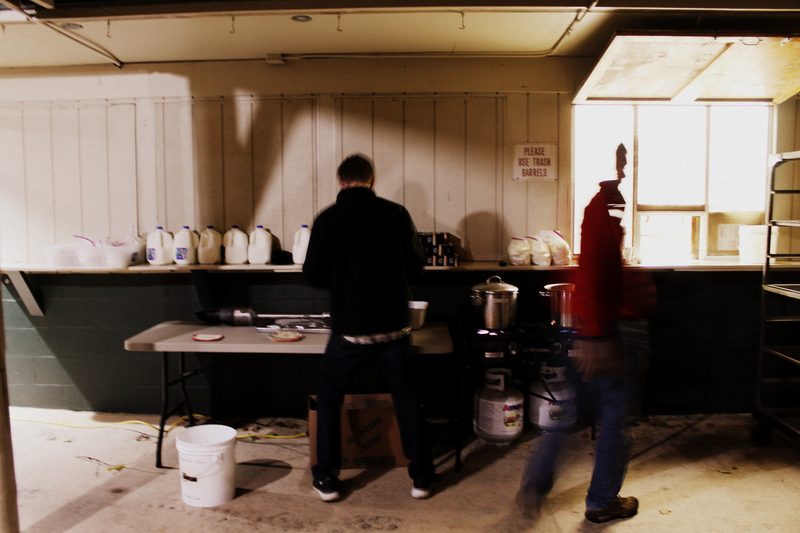 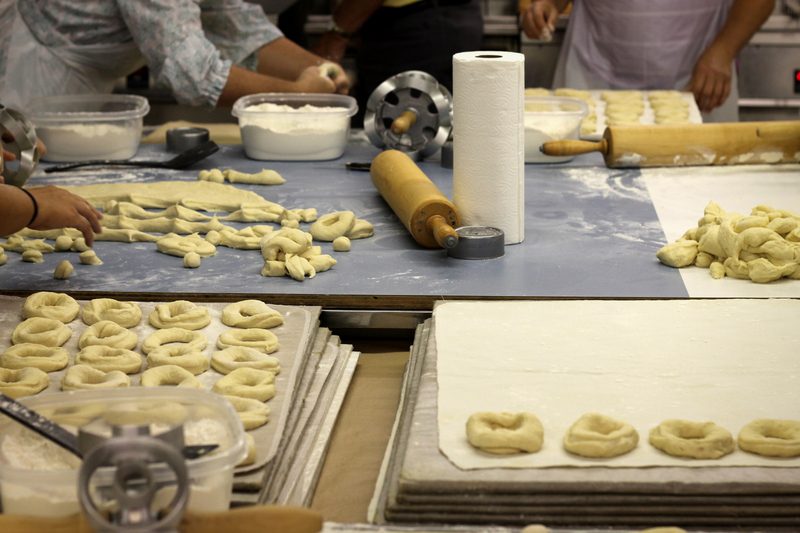 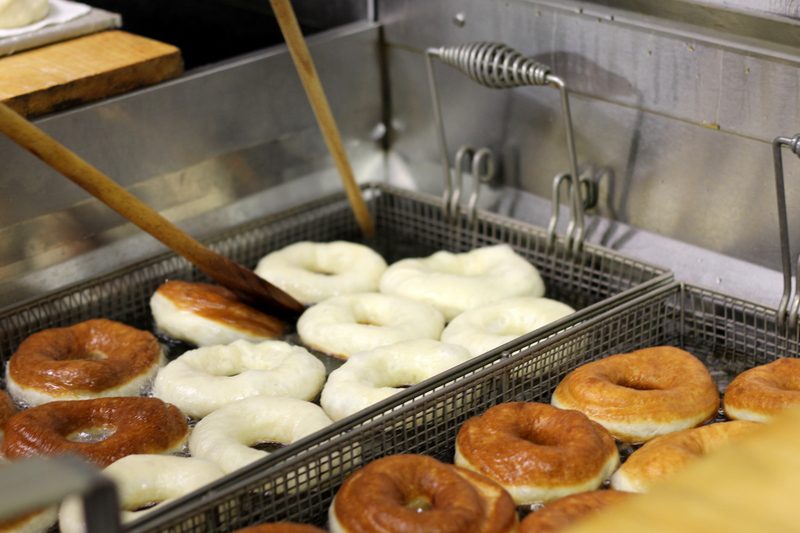 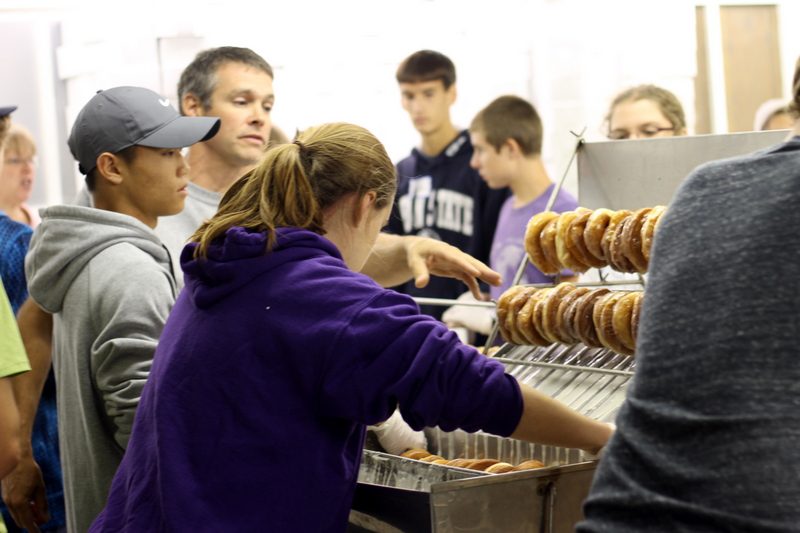 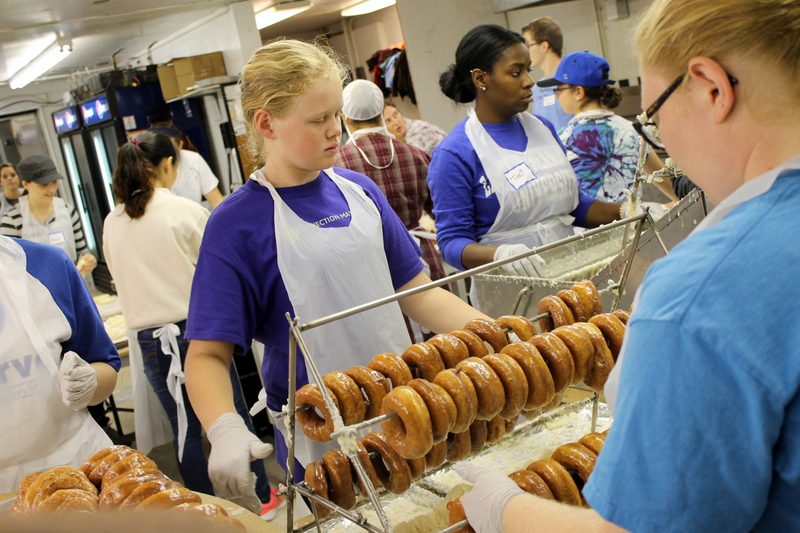 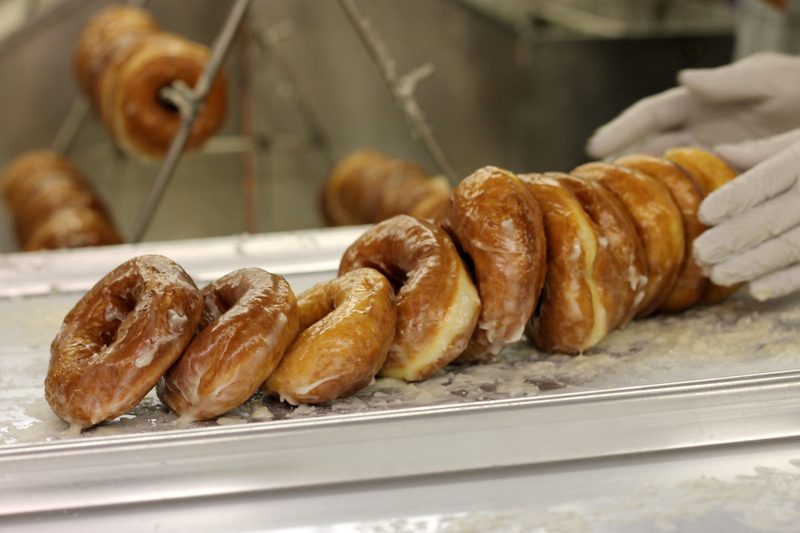 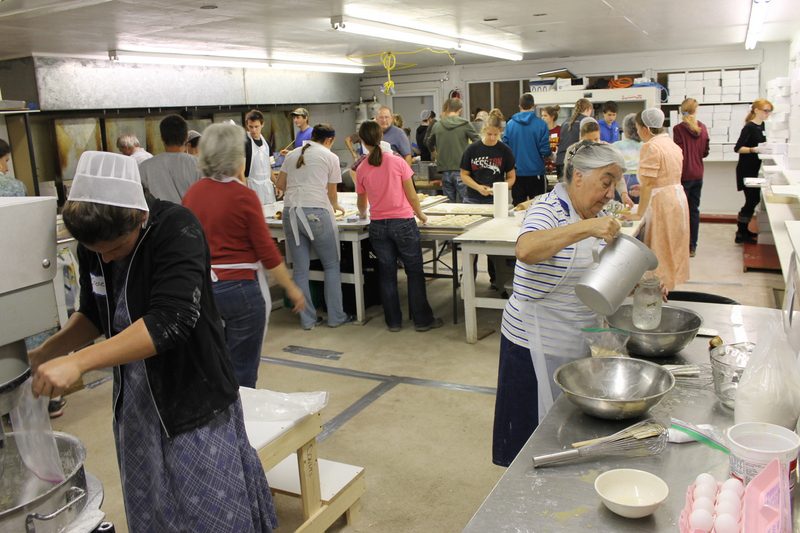 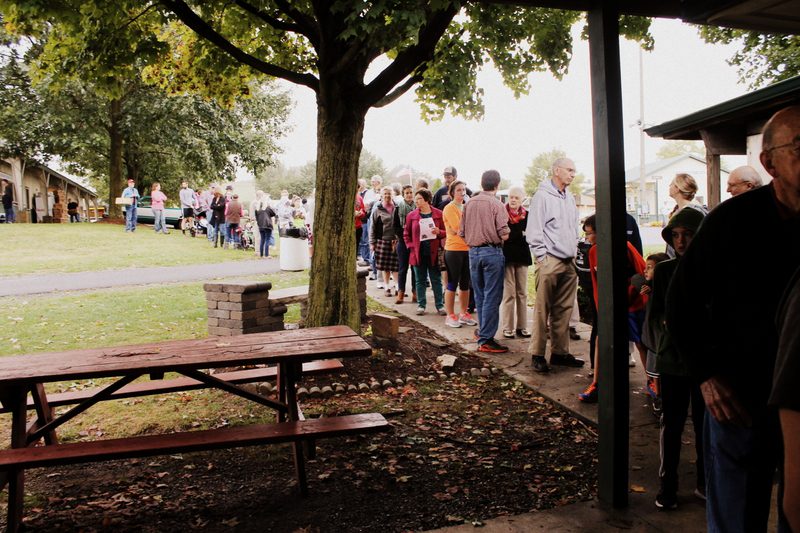 *For the first eight hours, the fairgrounds were fairly quiet. It was dark outside. It felt like we were in our own little, very busy, world. And then around 9 o’clock, the place exploded. Suddenly there was a line. Never before have I had that many people waiting to eat my food!

*There were three shifts of volunteers, about 30 in each shift. Many of the volunteers were experienced and knew more about the process than we did which was wonderful.

*For eleven hours, our older son stood outside in the pavilion (because he was using a gas cook stove) and scalded milk, melted butter, and blended the hot liquid into the mashed potatoes with an industrial immersion blender.

*From the mixing table to the proofing room to the rollers to the runners to the fryers, glazers, and boxers, the system was like a well-oiled machine. My husband and I did supervision, quality control, and problem solving but hardly any of the actual work.

*There were a few glitches (our dough uses less yeast so it took longer to rise, we ran out of boxes, we went over-time and had to call in extra volunteers), but they were totally manageable. It’s just donuts, I kept telling myself (and my fretful husband).

*Exhaustion happened. Around 11:00 am, my face stopped working—I could hardly smile, and it was a struggle to form words. My entire body ached, even my toes. I was hungry. Dehydrated, too. I felt like I might start weeping at any moment.

*The clean-up crew = angels. While I stood around vacant-eyed, they made things happens. Even when I walked out and laid down on a picnic table, they kept at it. 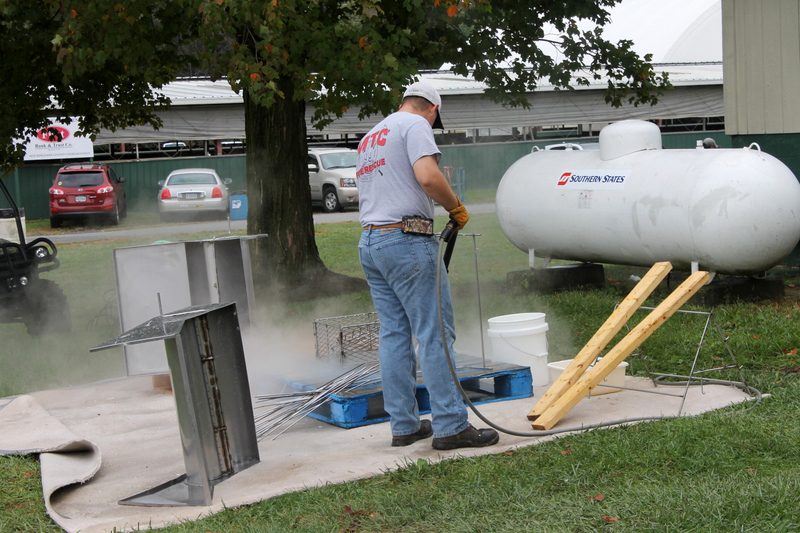 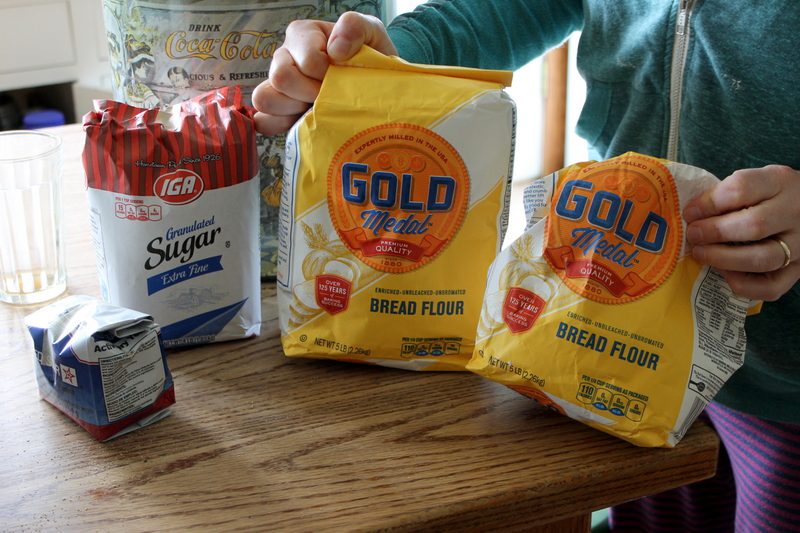 all the leftover flour

We got home mid-afternoon. Unpacked a few things, washed up dishes and a bunch of kettles, ate a donut, vacuumed. My son went to bed at four, and my husband and I were in bed by five. I slept for thirteen hours.

PS. Except not really. We keep talking about the process, making changes, planning for next year. In church this morning, my husband made a preliminary sketch of how he’d like to re-organize the proofing room.

PPS. We are not at all sick of donuts. Crazy, but true. 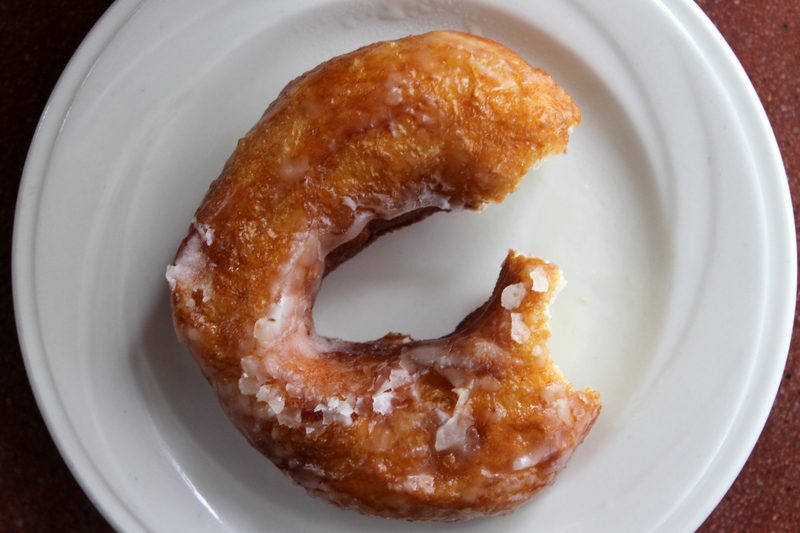 This same time, years previous: the soiree of 2014, a lesson I’d rather skip, the quotidian (10.1.12), Sunday cozy, pulled braised beef, and serious parenting.