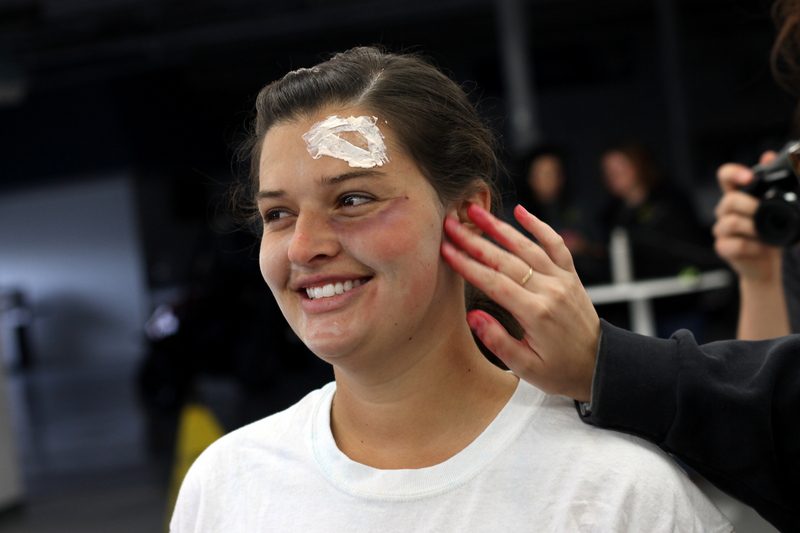 Warning: these photos contain blood.
The blood is fake, but still. The warning stands.

On Saturday I took my son to his EMT class’s MCI (Mass Casualty Incident) simulation. Of course, my son couldn’t participate, much to his disappointment, but at least he got to observe. (He was just two weeks shy of completing his training when he wrecked his bike, which totally bums him out. However, his instructors are bending over backwards to make sure he’ll complete his training…just a couple months later than the rest of the class, thank you, instructors.)

I had no idea what to expect from the simulation, but once we arrived on the scene, I began to get a clearer picture. 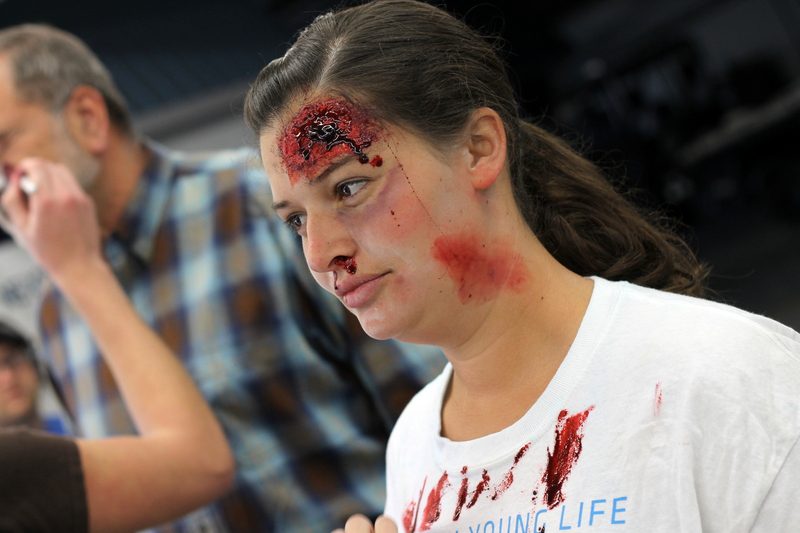 This is the woman (unwittingly) responsible for getting my son interested in the EMT program.

A bunch of already-trained EMTs were gathered around tables, getting fancied up with fake wounds. There were head wounds, bloody noses, gashed legs, a screw sticking out of a chest, road burns, etc. When the “victims” got word that the students were on their way, they got into position and one guy went around with the bottle of blood, adding more where needed. 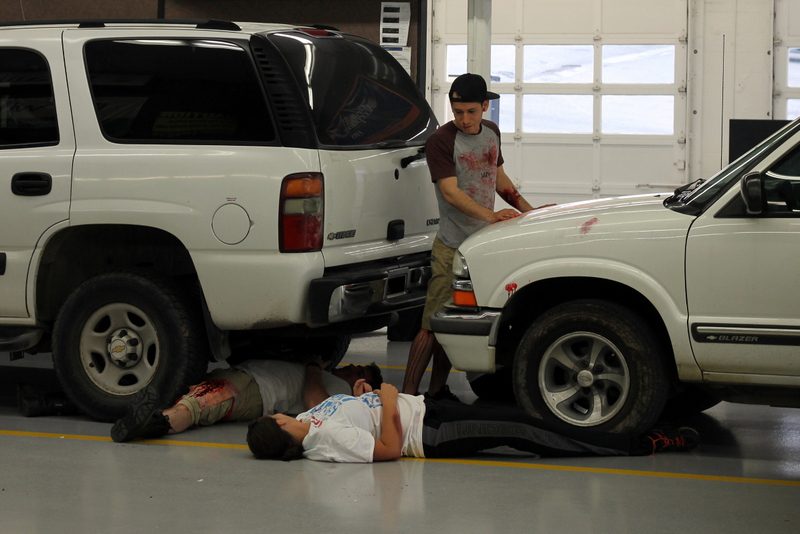 The students entered the building in groups of two or three, just as though they were arriving on the scene in different ambulances. As soon as the students arrived, the “injured” folk went into action, shouting for help, screaming, and crying. The walking wounded and the bystanders rushed the students, pleading for help. The noise was deafening and the chaos overwhelming. Which was the point entirely. (Another year, they actually had a Medevac helicopter on the scene.) 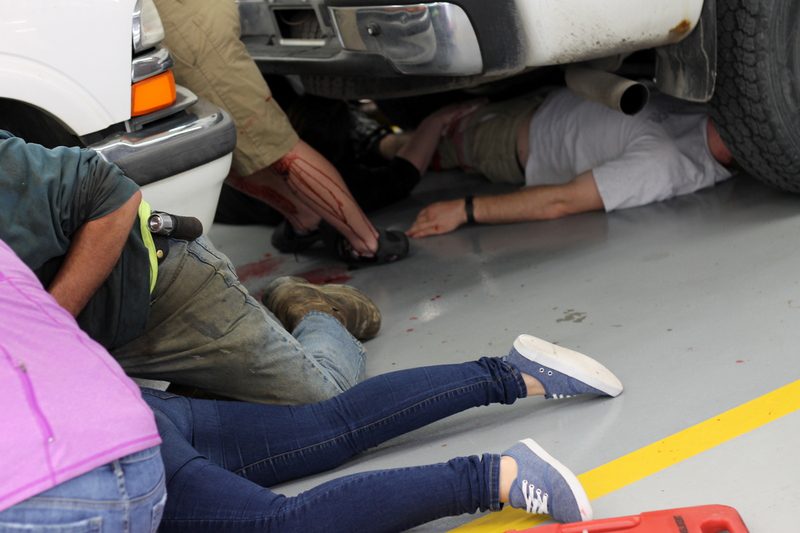 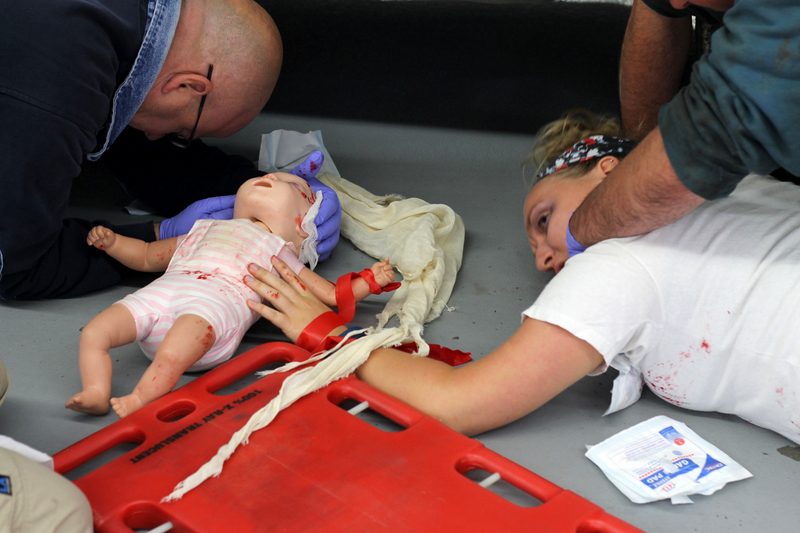 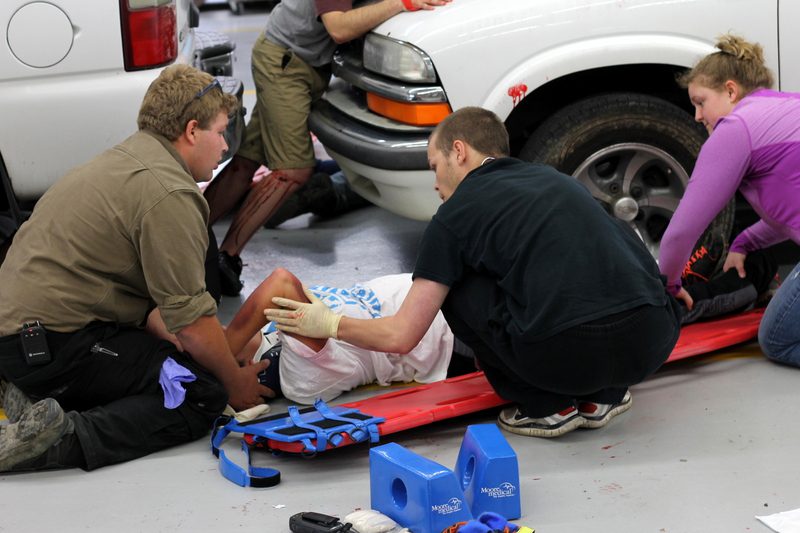 At the beginning, it was quite stressful to watch—not enough workers and so many injured people. The first wave of students (poor things!) assessed the situation, tying colored bands on the injured folks to signify their level of need, radioing out to the other class members, unpacking equipment. When the next wave of EMTs, and then the next and the next, finally arrived on the scene, I felt actual relief. Now they could finally start doing something. 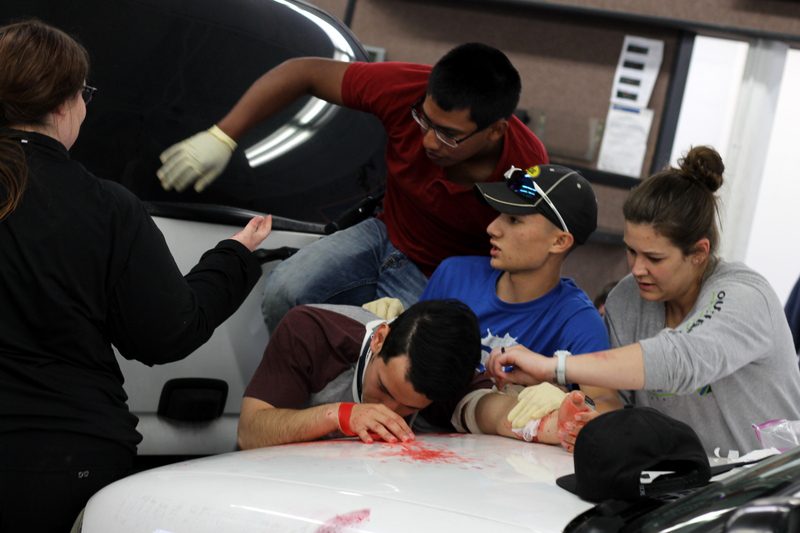 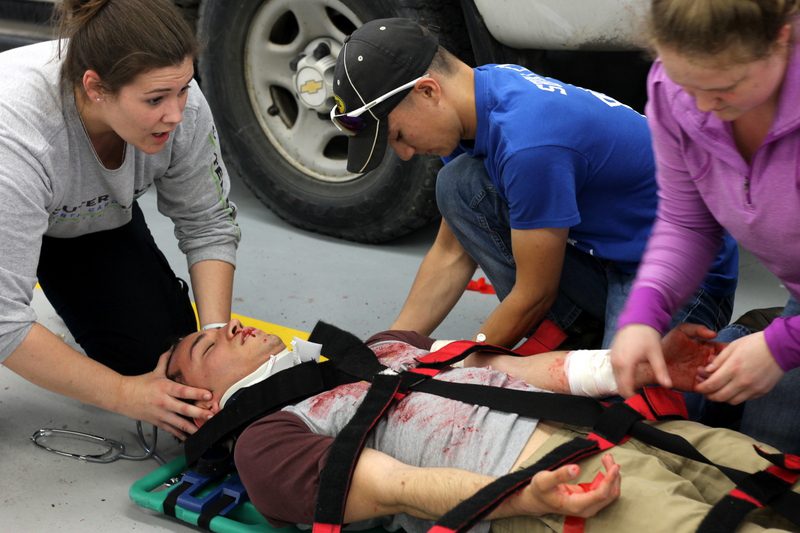 See the young man in the blue shirt? He was with the ambulance that came
when my son got injured, and my son greeted him by name.

For the next twenty minutes, we walked around the scene, observing the students as they worked their way through the situations. One guy (who spoke only Spanish to jazz things up) was pinned between two vehicles. Another woman had her foot trapped under a car’s tires. A man was completely under one truck. There was a motorcycle victim, a freaking-out woman with a baby, and a dead guy. There was a bystander who heckled the volunteers nonstop and needed to be retrained. One guy started seizing (or something); another woman passed out.

And then the show was over. 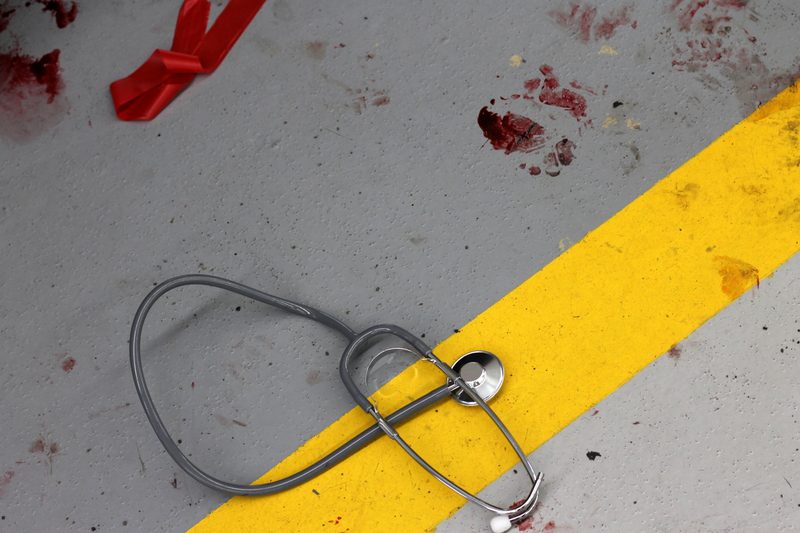 And that, my friends, is part of the EMT training process.

This same time, years previous: creamy avocado macaroni and cheese, the definition of insanity, burning the burn pile, how to get your bedding/house/kids clean all in one day, and cream cheese pastry and classy rhubarb pie.