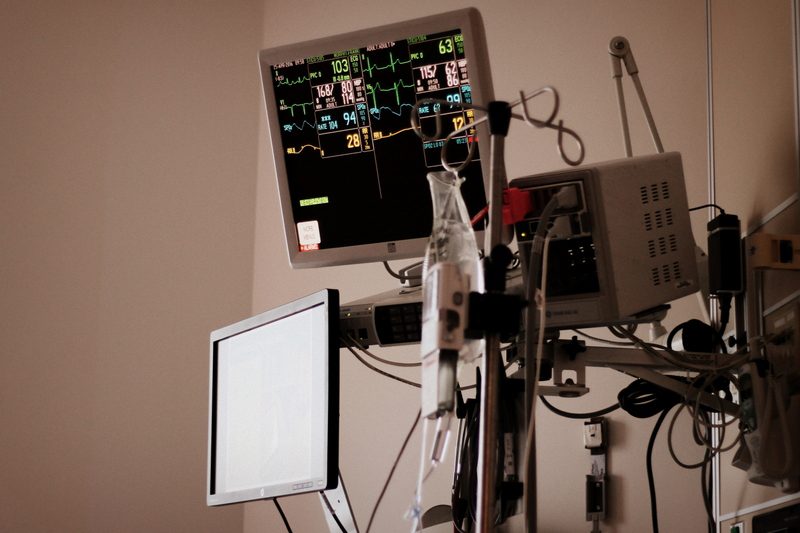 Wednesday night, we were discharged from the hospital, directly from the ICU unit, which, we learned, is unusual. One nurse who had been there for 30-some years said she’s only ever discharged one patient. I credit our nurse for getting us out. He advocated pretty hard on our behalf, pushing the doctors to communicate and get on the same page. He was pretty excited that we were leaving at the same time he was going off his shift (our son was the second patient he’s seen discharged directly from ICU), so he walked us out to the car himself.

Speaking of nurses, we had excellent care throughout our stay. Like, really excellent care. One nurse had trained at John Hopkins and went out of her way to explain all the procedures and why they mattered. Our first nurse was the one who saw to it that we got moved to a better room so we could sleep. Other nurses went out of their way to offer to get us drinks, blankets, pillows, shaving cream, whatever. They told us stories about the types of illnesses they see in their particular ICU: Stevens-Johnson Syndrome, smash face (that’s what they call it!), etc. Our ICU unit was the one that has medical-grade leeches and maggots on hand for burn patients, and the unit is certified (or whatever) to treat the president should the need arise. One of our nurses said that the coolest thing she had ever seen was a bladder made from a sheep’s intestine. A good nurse is never to be taken for granted. Never ever ever. They make all the difference in the world. 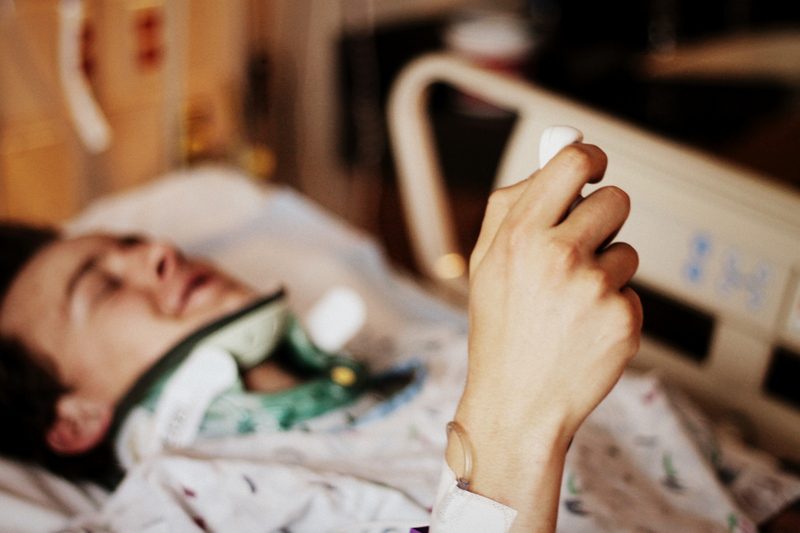 A personalized pain pump also makes all the difference: punching the button.

The frustrating part was the specialists. They were kind and capable, but they didn’t communicate efficiently with each other. We’d get an MRI and then have to wait 18 hours for the results. The results for the spine x-rays took another 18 hours. What irked me most was that they didn’t want our son to eat because there was a chance he might need surgery, so there he was, flat on his back, pumped up on painkillers and with no nutrition. No wonder, come Tuesday morning, he got disoriented and agitated. He didn’t know where he was and kept trying to pull off the leads. They ordered a sedative, but we didn’t end up using it because he settled down after I sponge-bathed his hands, feet and face. 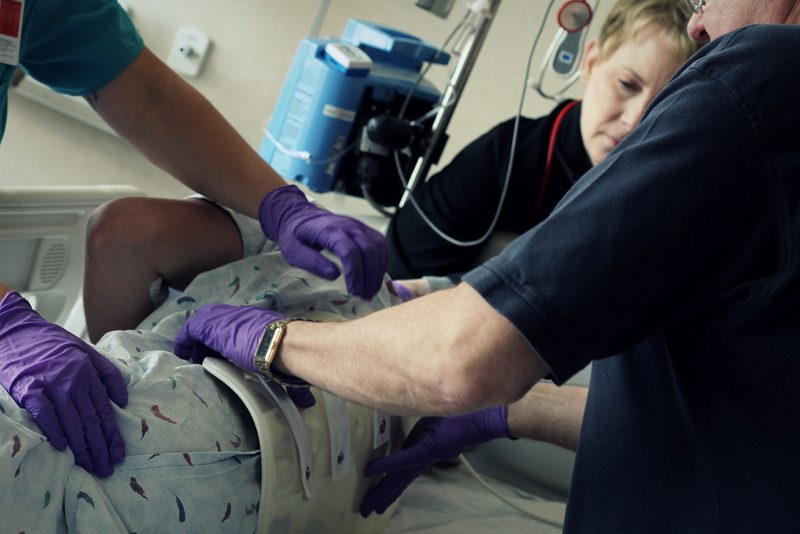 Tuesday afternoon, after strapping him into his made-to-order brace, they got him to his feet. He got light-headed and threw up in the giant condom puke bag. So they let him rest for a couple hours before trying again. 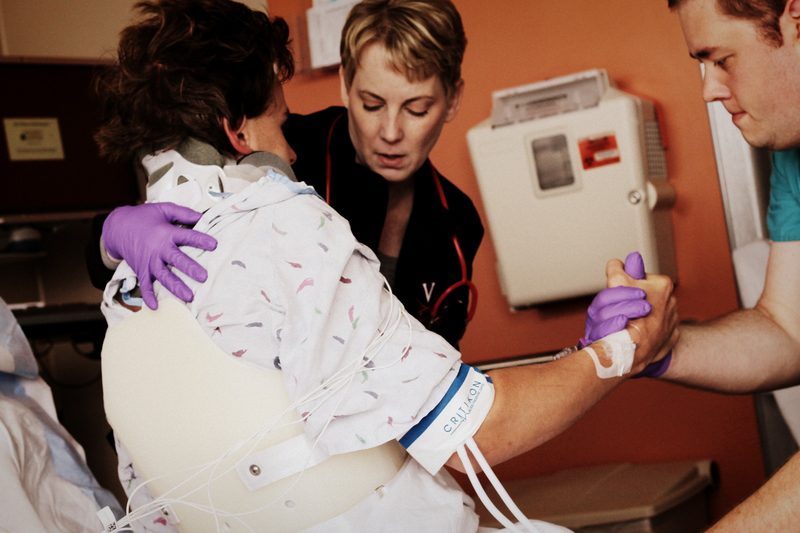 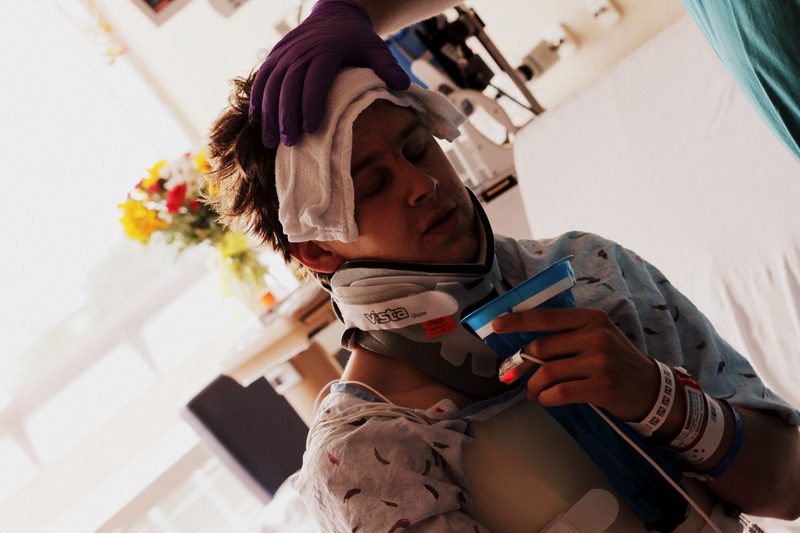 The second time around, he did fine, so they took him for x-rays (he had to be able to stand by himself for a couple minutes for the x-rays) to see if his spine was stable. Apparently, he passed the test, and that evening they cleared him to eat. He said his two saltine crackers tasted superb. 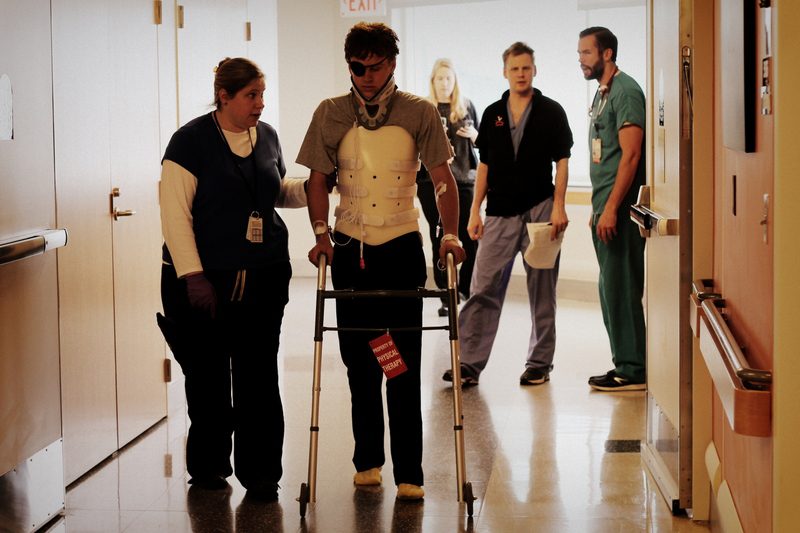 Wednesday’s physical and occupational therapy went great, and we got cleared to go home mid-afternoon. 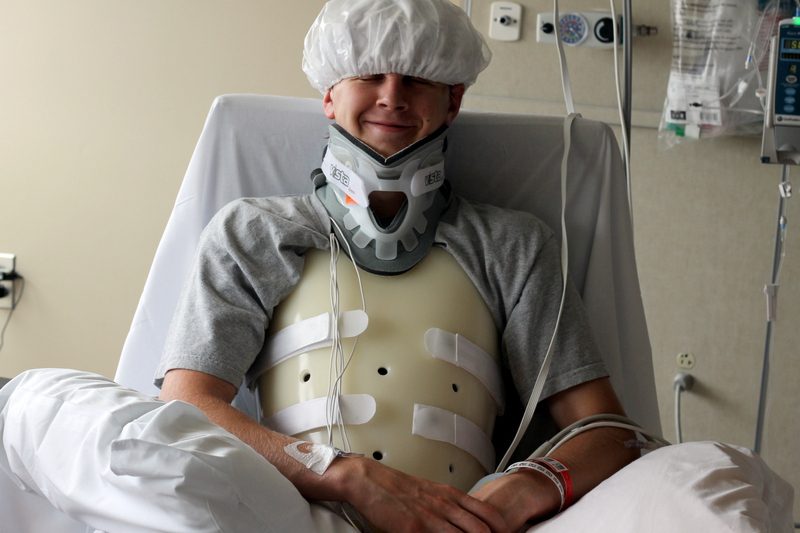 But then the doctors got concerned about his double vision and we had to wait while a whole chain of them took turns coming up to examine him. (He’s fine, probably. PT gave him an eye patch to ease the eye strain, arr matey. If he still sees double in six weeks, we’ll go back.) It wasn’t until bedtime that we finally got off the floor. Home at ten. 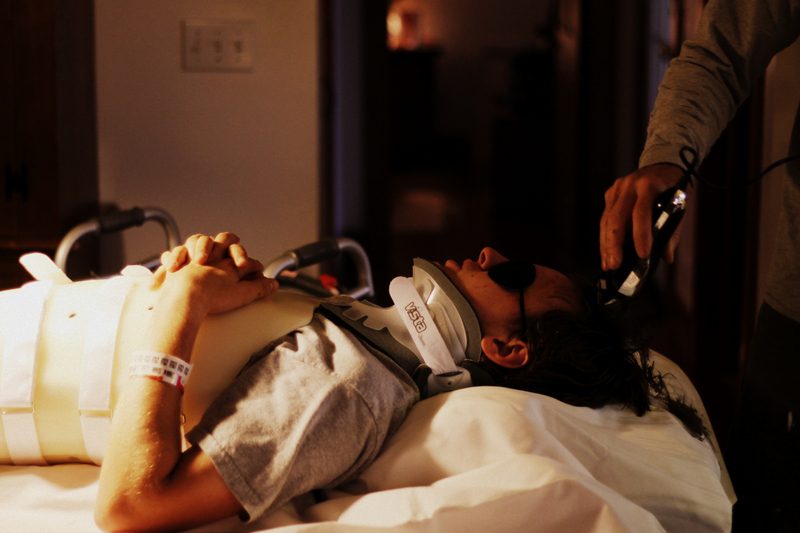 The first thing we did our first morning at home (after I went running, glory be!), was lay the kid down on the dining room table and shave off his hair. We had done two of the shower cap washes while in the hospital, but they were a complete joke. The kid’s hair was beyond disgusting. So off it went. 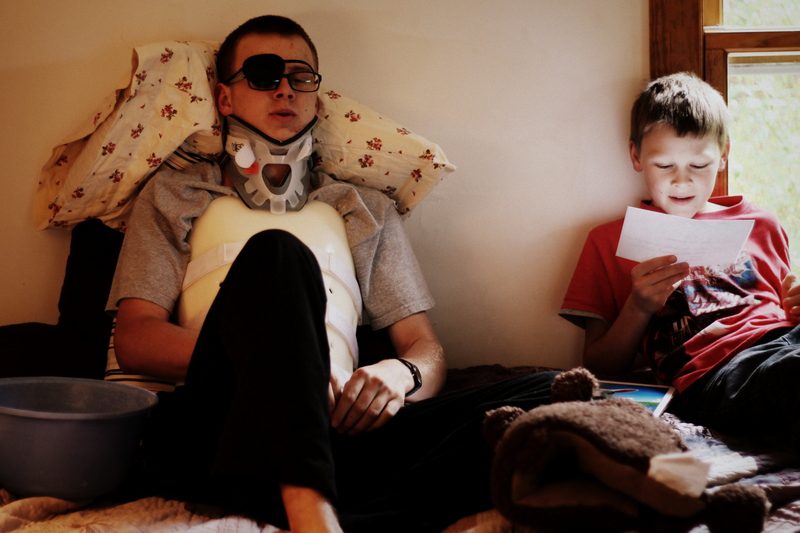 Day One was spent lounging in his new sleeping quarters, hanging out with his siblings, eating and drinking and peeing (never take for granted the basics!), and reading a whole pack of hilarious get-well cards from his cousins. His sister fashioned a computer station out of his walker and a piece of wood, and that evening his father and I introduced him to Sherlock. 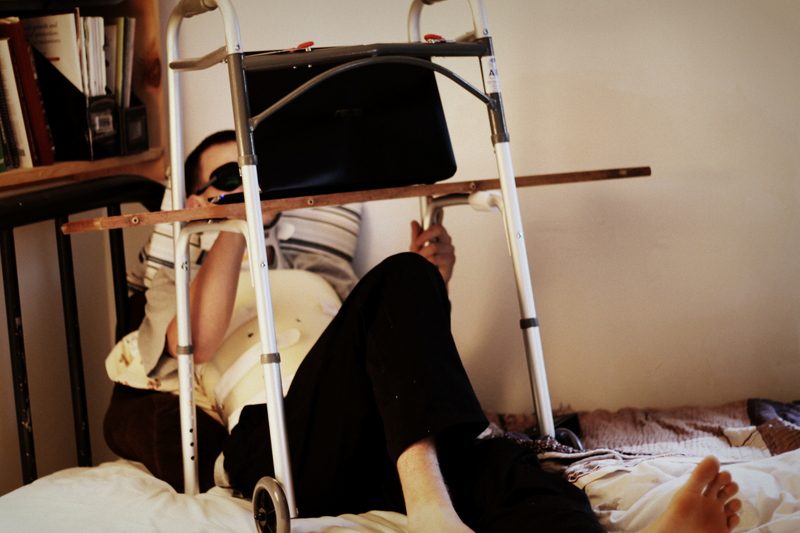 Last night, my son had his first shower, and my husband and I argued nonstop throughout the changing of the braces. (Being a solid team for three days in a row is wearing—who knew how refreshing it is to argue over stupid stuff once again!) My son was like, No! You do it this way! and Let me check that brace before you put it on, and Geez, you guys. All my training gone to waste. I can’t believe I have to just lay here while you figure it all out, and Look, I’LL hold c-spine myself, and No! Don’t roll me until I say! Don’t you know the person holding c-spine in the one to count? Okay, one, two, three! I about peed myself laughing. 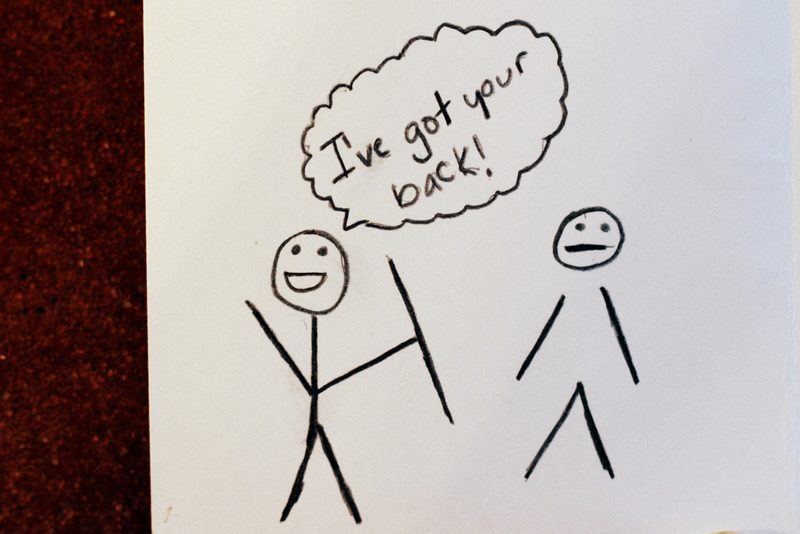 To summarize: we are doing well! I slept a full eight hours last night (the first full night of sleep in weeks, since I didn’t sleep much while working on the play) and went running again this morning. My younger daughter has a friend over to spend the night; they’re making chocolate cupcakes as I type. My husband is back at work, and, for today, my older daughter is working with him. Right now, my older son is actually out on a leisurely drive with a friend from church.

Oh, right. The treatment plan! He’ll wear the neck brace for six weeks, and ninja warrior/turtle shell/clamshell brace for six to eight weeks. The neck brace is to stay on at all times (we can change the foam pads when he’s laying down), and the clamshell can come off if he’s laying flat, to give his skin a break. He’s not to lift more than ten pounds. Physical therapy will start when the braces come off. (We also noticed a chipped tooth, so I want to have a dentist check his teeth. Plus, there’s the vision problem and the concussion after-effects to monitor.) My guess is—because they wouldn’t give me any specifics—that he’ll be at average functioning (singing, studying, walking, doing household chores, feeling good) in three months and fully back to normal (construction work, running, lifting weights, biking, etc) by the sixth month mark.

And thus concludes this series of medical posts. (The kid has hogged entirely too much air time.) Next posts will be about non-traumatic topics like pixie cuts, salad, and post-play depression. Normal life is beautiful.