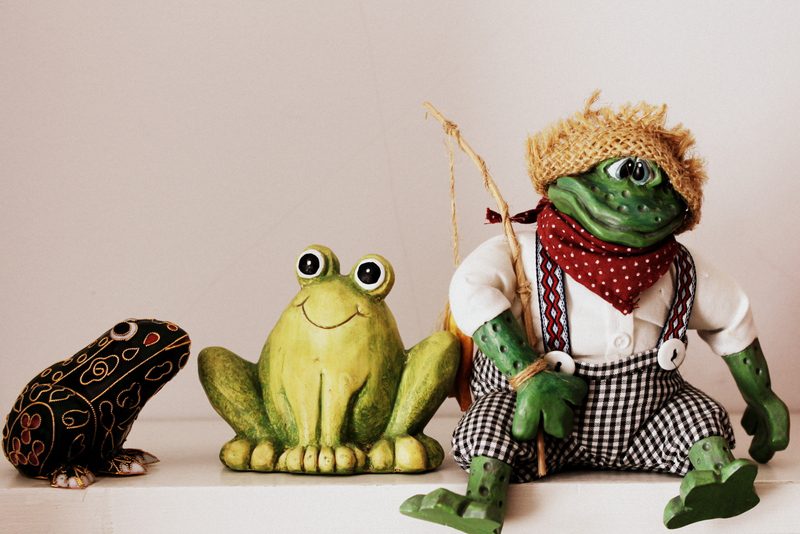 My younger daughter turned twelve on Monday. Or three, rather, leap year baby that she is. Now that she’s getting older, her leap year status feels more special. Random people get excited about it on her behalf and that makes everything so much more fun.

It wasn’t until this year, on her very birthday, in fact, because I’m on the ball like that, did it occur to me that we don’t have a special tradition to mark her real birthday. Suddenly the error of my ways seemed completely unacceptable. Something had to be done.

So on the way home from our afternoon outing to the pool, I stopped at a novelty store to buy frogs because leap year is all about boing-oing-oinging frogs. (It kind of threw me for a loop when the Google page had bunnies on it, and then I mentioned frogs to my mom and she was like, Frogs? It never occurred to me to connect frogs with leap year, and now I’m wondering if I’m the only one? What animal do you associate with leap year? Kangaroos? Tigger?) I scoured the store for three different frogs, and we presented them to her at supper. I made a fine speech about how she’ll get one frog on each leap year birthday from now until the day she dies (I didn’t mention that we’d probably die first and someone else will have to carry on the tradition on our behalf) and about how she’ll only have to look at her collection to know how old she really is and about how when she’s eighty she’ll have twenty frogs. I don’t think she’ll really cared all that much, but knowing we had officially marked the occasion made me feel better.

Anyway, I wanted to tell you about her cake. Or rather, the filling I put between the cake layers. She wanted a fairy cake, but I vetoed that straight up. I don’t do decorating, I said. So she settled for a surprise cake instead. Her only request: that the cake be either white, chocolate, or red velvet. 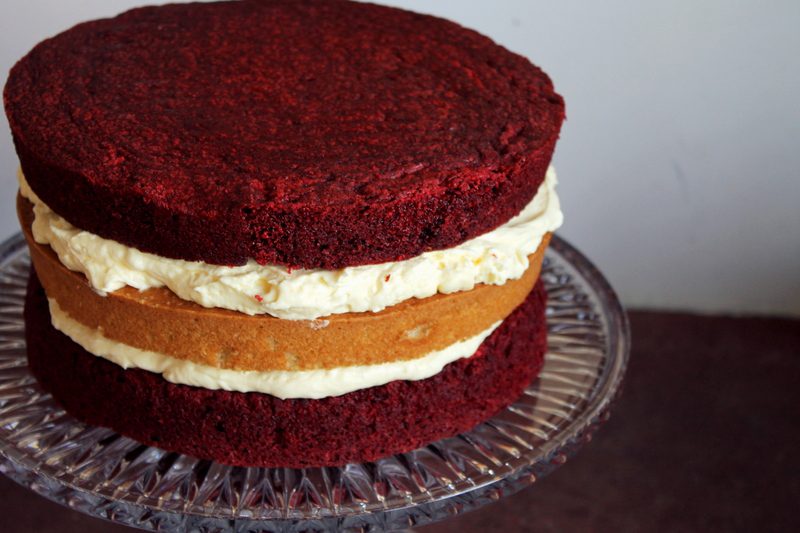 So I made a red velvet cake with a white layer in the middle. It was all good, but the filling was the special part. Well, that and that my older daughter and I attempted homemade buttercream roses—that was fun. I thought my idea to use a stick of butter as the rose nail holder was especially brilliant: 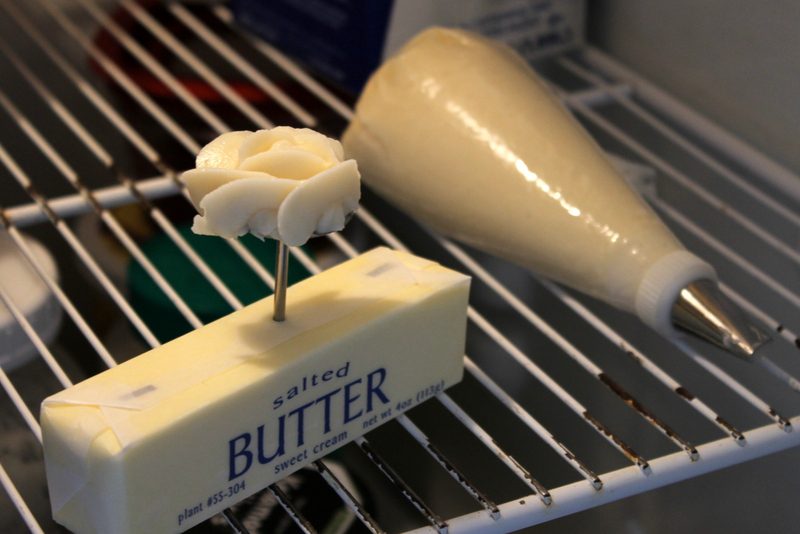 I got my idea for the filling from the Costco bakery cakes. I love their cake fillings: they’re like a creamy mousse, or a rich custard, and they have that artificial bakery cake flavor that I sort of love, yum, chemicals. Whenever I get a piece of Costco cake (like all of two times in my life), I have to fight the urge to split the cake in half and spoon out the filling.

So I Googled knock-off Costco cake filling recipes. There were a variety of recipes to choose from, but mostly they went like this: instant pudding mixed with half-and-half and then whipped cream folded in. 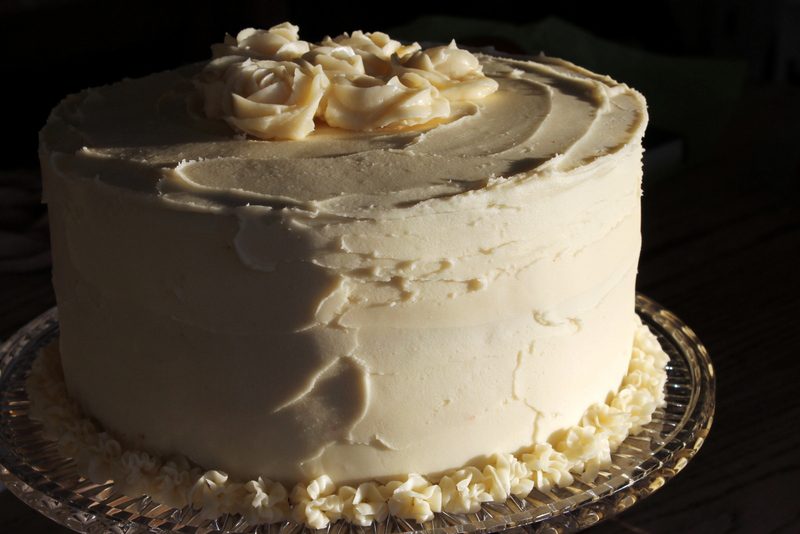 Instant pudding? Gross. But I bit the bullet and had my husband pick up some boxes from the store. I played with the filling recipe as I went along, enhancing it with cream cheese, and the resulting filling was exactly what I was after. If it wasn’t for that box of instant pudding, I’d be super proud of myself. I mean, I love the filling, but I feel slightly sheepish about it. Like I’m turning into some sort of floozy cook. Instant pudding, ew. 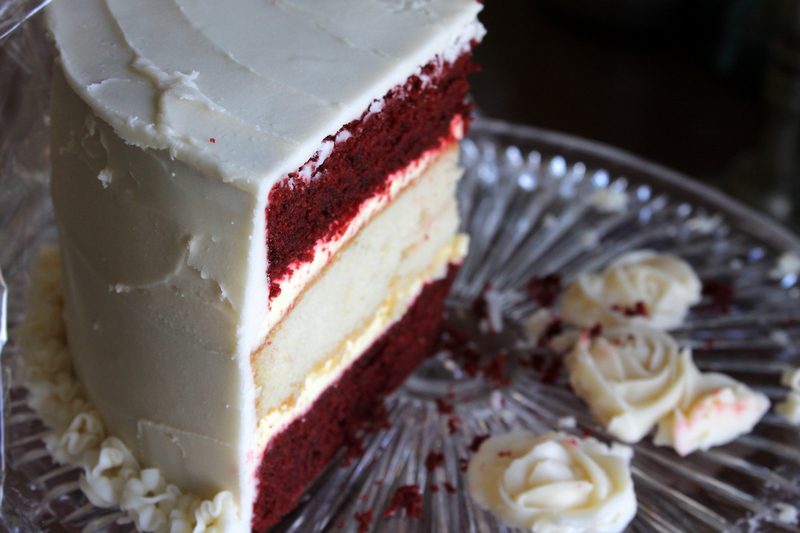 Creamy, Costco-esque Cake Filling
Adapted from all over the web.

Some recipes called for whole milk instead of half-and-half. Your call.

Whisk the pudding mix with the half-and-half. Give it a stir every so often for the first few minutes. After five minutes, the mixture should be quite thick. Set aside.

Whip the cream and transfer to another bowl.

In the same mixing bowl that you used to whip the cream—don’t wash it—beat together the cream cheese with the sugar and vanilla. Beat it hard, for a couple minutes. Add the pudding mix, a little at a time, continuing to beat hard. Turn off the mixer and fold in the whipped cream by hand. Chill the mixture until ready to use.

This makes enough filling to cover two round cakes and still have some leftover.