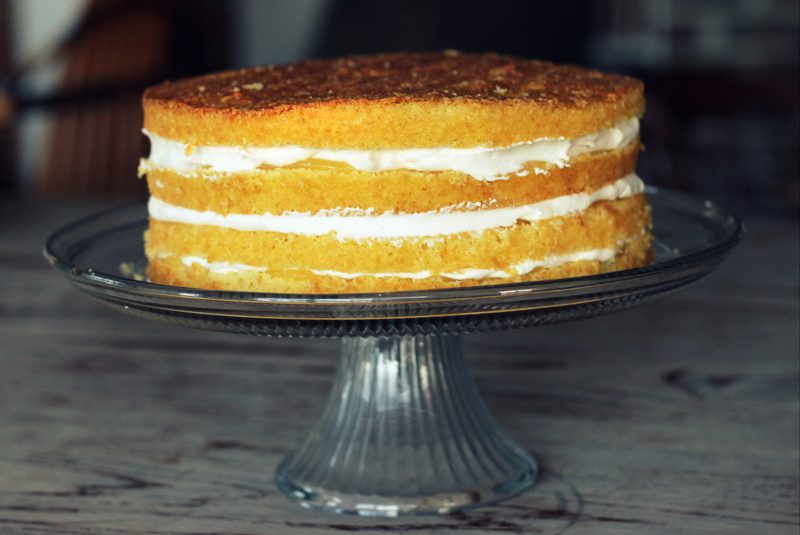 After receiving several enthusiastic recommendations, the kids and I have started watching The Great British Baking Show (through Netflix streaming). Everyone said we would love it, and they were right. It’s just a regular baking show with contestants, challenges, and a slow culling of the group that leaves one winner standing (or so I assume since we haven’t gotten to the end of season one), but waaay better because everyone speaks with a British accent. Cakes are “sponges,” crackers are “biscuits,” and the generic term for baked goods is “bakes,” as in “Your bakes have a nice even color.” Isn’t that delightful? Also, the moderators are cooky-funny and everyone is kind and supportive which makes the show warm and lighthearted.

It’s actually inspiring, too. The contestants are amateur cooks (there’s a 17-year-old!) but most of them are leagues beyond me. I don’t really care about all the decorating (though it’s great fun to watch), but my knowledge of pastry creams, piping creams, gênoise sponges, fondant, shortbread-like pastry, homemade caramels, and meringues is rather limited. I’m generally for desserts that are straightforward, but the show is making me reconsider my hum-drum approach. Why not knock out something a little fancier than normal? You know, an extra sauce here, a couple different fillings there… It can’t be that hard, right?

So I decided to make a layered yellow cake. I’d split the cake into two layers, fill it with vanilla pastry cream and raspberry sauce, and top the whole thing with billows of whipped cream. That was the dream anyway. The reality went like so:

1. Some of the cake batter seeped out of the springform pan and charred into a stinky mess on the oven floor.
2. The cake was underbaked in the middle, but I simply made like a Brit and cut out the middle. I’d make extra whip cream and ice the whole cake.
3. The jam didn’t thicken properly.
4. The pastry cream wasn’t firm enough to support the second layer (is any pastry cream firm enough for layering???) and oozed all over the plate.
5. There was no way the whipped cream, no matter how much I made, could cover that wreck of a cake. So…
6. I made a vanilla pudding, chopped the cake into slices, and made a trifle from the cake, pudding, whipped cream, and more berries.
7. After a day or so in the fridge (because no one was crazy about my cake wreck), the creams in the trifle separated and the bottom of the bowl filled with water so the chickens had a sweet feast.

I licked my wounds and went back to drawing board. I was certain a good sponge and cream fillings were possible—the British contestants made them all the time. Some quick recipe research later and Round Two was underway.

And it was a success! I made two sponges—so light! so airy! so buttery!—and divided them each in half to make a four-layered cake. The vanilla cream filling held its shape and provided a light cheesy creaminess. And a thin schmear of lemon curd between each layer added punch. 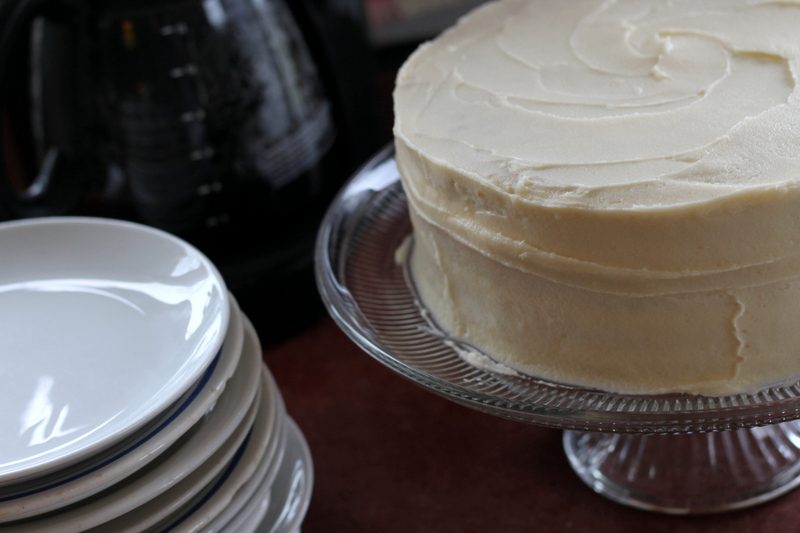 I assembled the cake one evening before supper. I thought of serving it for the book club I was hosting that evening, but I had already promised the group warm chocolate chip cookies so I decided to stick with the plan. After they left, I pulled the cake out of the fridge to admire it. I nearly cut into it—the temptation was almost physically painful—but cake at 10:45 at night? That was too late. Plus, it was so beautiful. Something that lovely required a big reveal with lots of people present to ooh and aah. So back into the fridge went the cake. 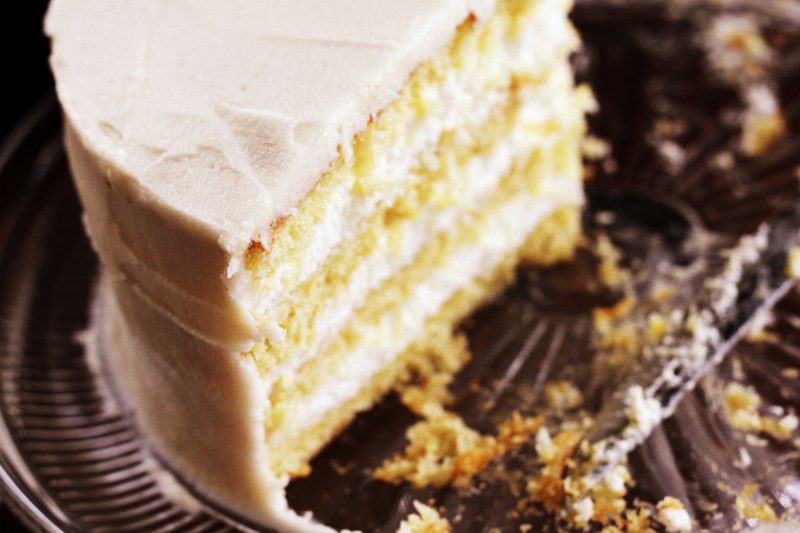 Lunchtime the next day, the house was bursting with people: my parents, brother, nieces and nephews. It was the ideal cake-devouring crowd, and devour it they did! My mother swooned, and my husband—the man who is not a huge fan of sweet stuff—even had two pieces. The leftover cake I claimed for myself, eating it piece by delicious piece over the next several days. When the kids realized that the cake was gone, they were miffed. And rightfully so. 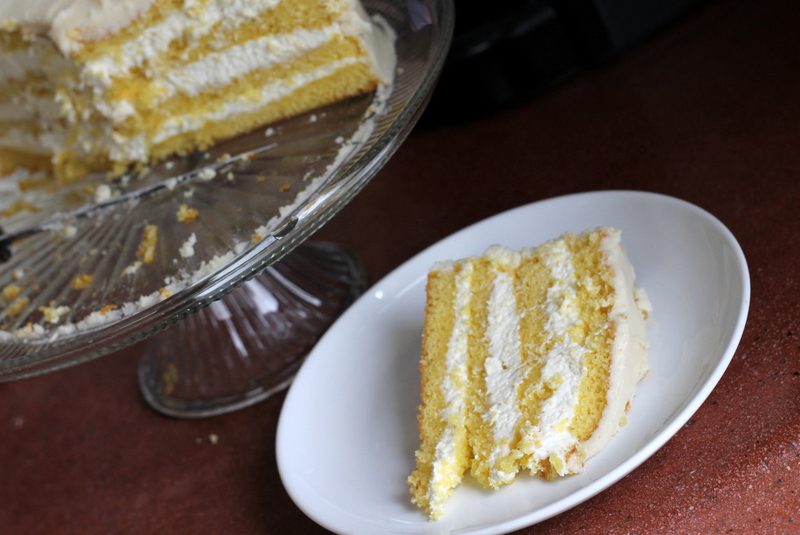 Lemon Cream Cake
Recipes for the cake and vanilla cream are adapted from Cook’s Illustrated Cookbook.

I still don’t know how to make a gênoise sponge, but I don’t care. The real deal looks unnecessarily complicated, and this hot milk sponge tastes wonderful and is  simple to make. KISS, y’all (keep it simple, stupid).

The lemon curd (I used store-bought) was delicious, but be forewarned: it adds sweetness to an already sweet cake. Perhaps a tart jam—maybe folded into the vanilla cream?—would help to cut the sweetness.

Put the milk and butter in a saucepan and heat until butter is melted. Remove from heat and add vanilla.

Pour the batter into two greased, parchment-lined, 9-inch round cake pans. Bake the cakes at 325 degrees for about 20 minutes. Cool cakes completely before inverting onto a wire rack.

Cakes can be wrapped in plastic and stored at room temperature for a day (and probably longer, if needed).

Beat the first four ingredients together (if using a stand mixer, use the whip attachment) for a couple minutes. Turn the mixer to low and slowly pour in the whipping cream. Increase the speed and whip for about two more minutes or until stiff peaks form. Cover with plastic and chill until ready to use.

for the assembly:
the two hot-milk sponge cakes, split in half lengthwise (use a serrated bread knife)
the vanilla cream
a double batch of buttercream frosting (or maybe a double batch of cream fluff frosting?)
about 1 cup (or a 10 ounce jar) lemon curd

Put one of the cake layers on a stand. Spread it first with a thin layer of lemon curd (about 1/3 cup) and then with a third of the vanilla cream. Repeat the layers, ending with the final layer of cake. Chill the cake for an hour to let it set up.

Dirty ice the cake with the buttercream. Chill to set. Do the final icing. Store cake in the fridge. Let set at room temp for about 15 minutes before serving.