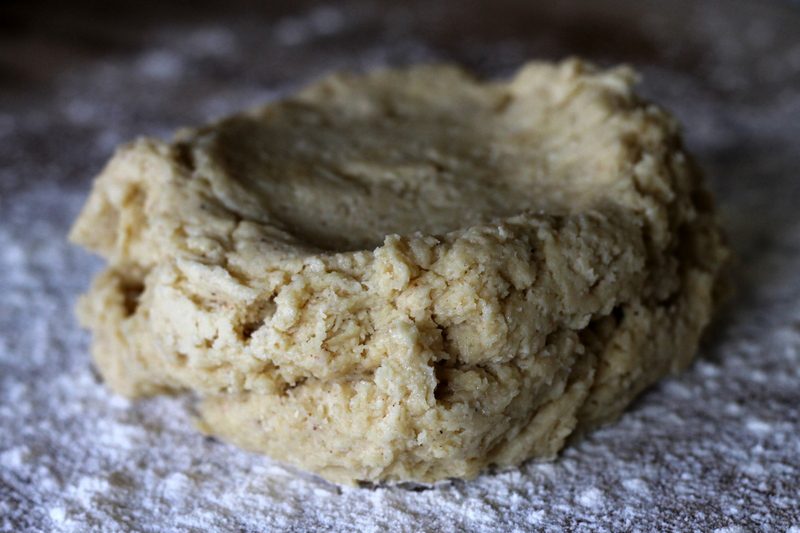 I did it! I did it! I have finally mastered the art of the old-fashioned sour cream cake donut and I am all puffed up with pride (and donuts).

It was no easy task, make no mistake. At one point I almost said Screw it and posted a less-than-satisfactory recipe complete with photos of scorched donuts, but I stuck it out and here we are! Like I said, so happy. 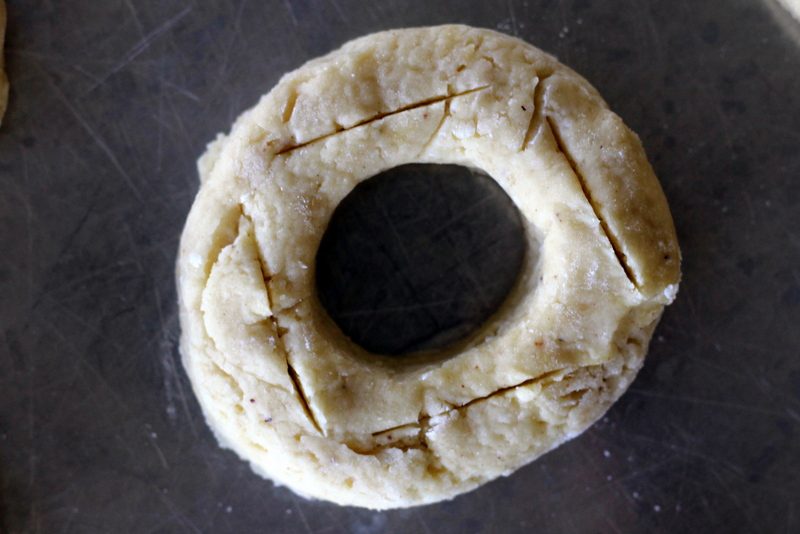 When I decided to take on the sour cream cake donut (my favorite), I first turned to the Internet where, weirdly enough, I discovered that all the recipes were nearly identical. I wanted variations for comparison’s sake, but no luck. So I switched to cookbooks, but those cake donut recipes either didn’t call for sour cream or I could tell at a glance that they wouldn’t be any good.

Since there was only one much-touted recipe on the Internet, you’d think that mastering the cake donut would be fairly straightforward. But no. My mother, one of my key taste testers, said my first donuts were too yellow (from our homegrown eggs), plus, they were puny. “Cake donuts must be substantial,” she said. So I tweaked and experimented, but the donuts kept flopping. The pigs got a lot of them. 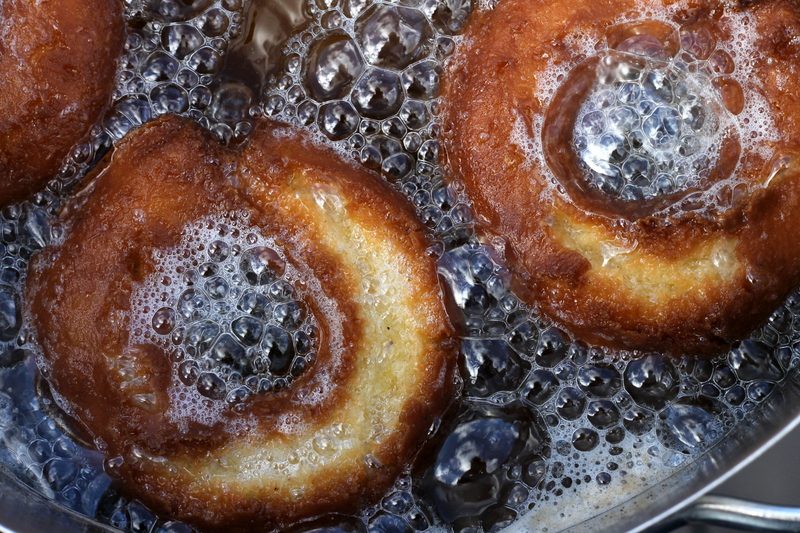 Last week’s batch was nearly perfect: satisfactorily substantial with a white interior and excellent flavor…but, go figure, burned. I could not seem to figure out how to not to burn them. Any less time in the hot oil and the insides were raw. But then I went back to the original recipe and read that the donuts were to be fried at 325 degrees, not 350 like raised donuts. Oh. Also, when I gave Mom a half donut to sample (they were good enough that I was getting scroogey), she said they were still a bit dry. Could I cut back on the flour, perhaps? 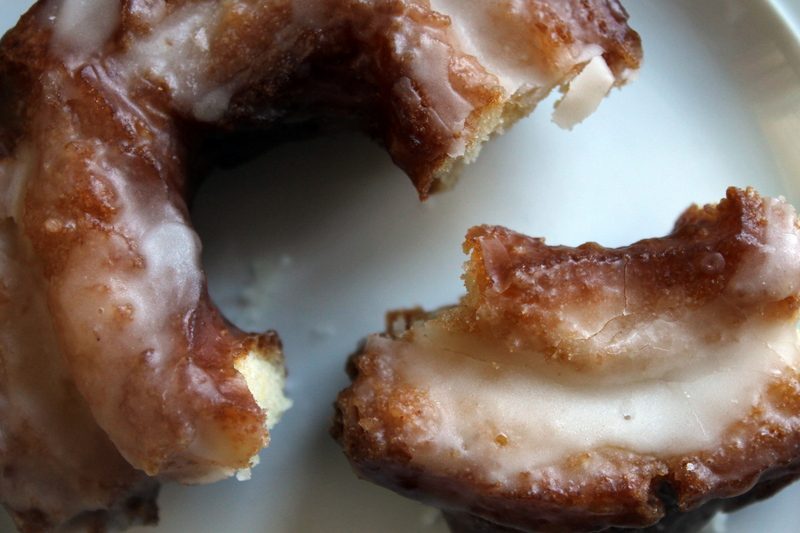 Fine, sure, okay, whatever. This was getting ridiculous. But then I cut back the flour (and added vanilla) and fried the donuts at the proper temp and, Voila!, I had my donuts. And you know what? All that struggle? Totally worth it. 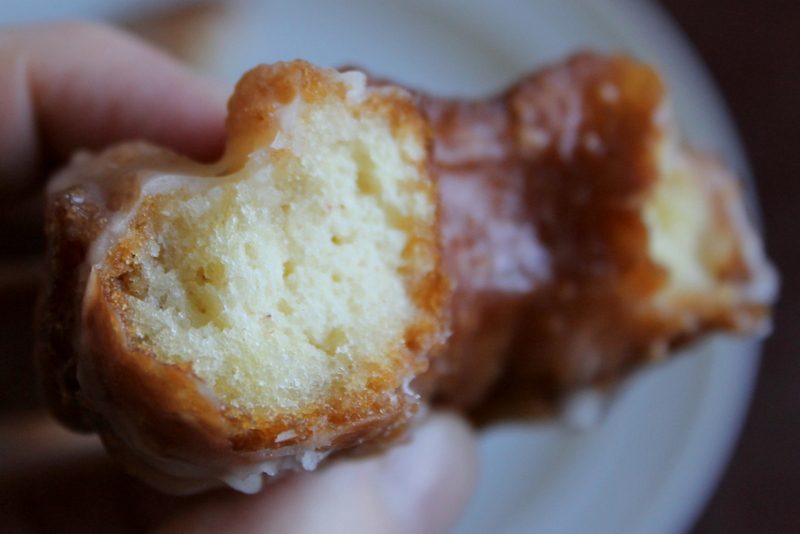 Old-Fashioned Sour Cream Cake Donuts
Adapted from various recipes around the web, like this one from Handle the Heat.

Some tips:
*Use anemic, store-bought eggs for a whiter dough.
*Many of the recipes I read called for a third cup sour cream but the dough absolutely needed a full half cup.
*I adore this glaze recipe. Raised donuts get all weepy (after about six hours, moisture from the donut seeps into the glaze and makes it watery), but cake donuts do not. The glaze holds up well over time and to freezing.
*I think these donuts taste even better the next day.
*The dough, either shaped into donuts or not, stores well in the fridge right up until it’s time to fry them.
*These donuts dirty the oil pretty quickly, so I almost never save it to reuse.
*My husband says that these still don’t taste quite as cake-y as bought donuts. I suspect it’s because I’m not using additives like cake enhancer (though I did consider buying some).
*This recipe makes about 7 or 8 large donuts, plus 2 donut holes.

On a well-floured surface, gently roll out the chilled dough until it’s 3/8ths to ½-inch thick. Cut donuts into desired shapes. This is a tender, sticky dough, so it’s easier to handle when cold. Also, when re-rolling, be careful not to work in extra flour as extra flour will make a tougher donut.

Place donuts on a lightly floured cookie sheet. Score the tops of the donuts with a sharp knife. This makes a craggy, crinkly top, better for catching all the crackly, sweet glaze. Cover the cut donuts with plastic and put the tray in the refrigerator.

In a large-bottomed pan, heat a couple inches of oil to 325 degrees. Fry a few donuts at a time, two minutes for each side. Remove from hot oil and set on a cooling rack that’s set over newspapers or paper towels.

Whisk together until smooth.

Dip the donuts in glaze and set on a cooling rack to dry. As the glaze sets up, you may want to spoon more glaze over the donuts.