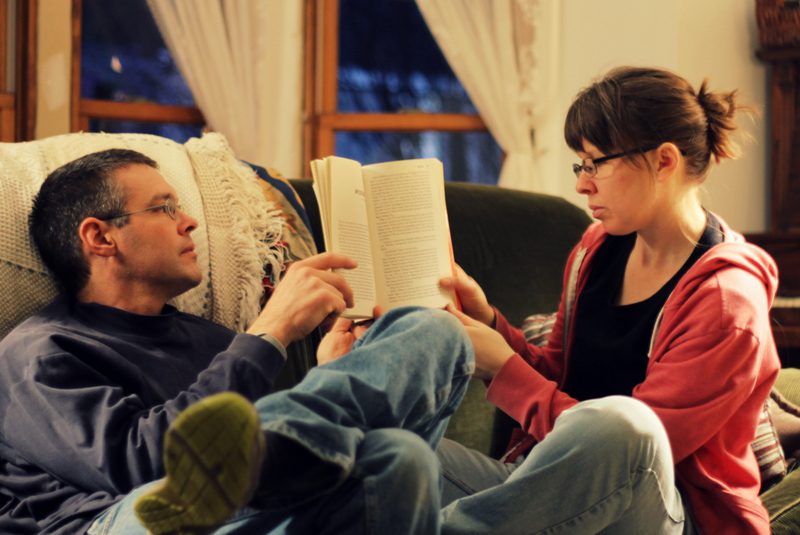 Since I made the commitment to read one book a month, I have been reading much more than I used to. I’ve read thirty books since my last list, and that’s not including the ones I read out loud to the kids or the ones that I started and never got around to finishing (there are a lot of those). There’s another reason I’m reading more: I’m learning to count reading as part of my work. If I’m going to write a book, I must read, both for research and to better my own writing. So now I have an excuse for reading in the middle of the day.

*100 Sideways Miles, by Andrew Smith. I’m not generally a fan of Young Adult Lit, and it’s been a year since I read this book, but I remember liking this one.

*I’ll Give You the Sun, by Jandy Nelson. Another YA fiction. Enjoyable.

*Gone Girl, by Gillian Flynn. A page-turner. My husband and I literally read it at the same time (see above photo).

*The Color Purple, by Alice Walker. I read this years ago and loved it. It seemed different this time around, harder to understand, almost. Does that even make any sense?

*The Presence of the Actor, by Joseph Choikin. I read this book (and the other two acting books on this list) because the director of the play I was in said it was required reading for his beginning acting classes. Since I’m a beginner, I read it. (Or skimmed it, rather.)

*An Actor Prepares, by Constantin Stanislavski. Because the director said to. The book’s concepts would’ve been easier to absorb if I had been reading the book in conjunction with actual acting classes, I suppose.

*Yes Please! By Amy Poehler. Fairly insipid. Lots of famous-name spouting, so a person like me who can’t remember famous names to save her life (probably because she doesn’t know them in the first place) finds it rather dull.

*The Perks of Being a Wallflower, by Stephen Chbosky. Another YA Fiction (what is up with me?). Well done, but nothing thrilling.

*The Actor At Work, by Robert C. Benedetti. I probably gleaned some valuable information, though I can’t remember what.

*Nurture Shock: New Thinking About Children, by Po Pronson and Ashley Merryman. I bought it and then wrote about it here. Highly recommend.

*Things I’ve Learned From Dying: A Book About Life, by David R. Dow. The author defends inmates on death row and deals with his father who is dying from a terminal illness. Well done, raw, and thoughtful.

*The Boy in the Striped Pajamas, by John Boyne. A staggering book. Tears and five stars.

*Maus I and Maus II, by Art Spiegelman. Graphic novel memoirs about the author’s father’s experience during the Holocaust. All the Jews are drawn as mice and the Germans as cats. I cannot recommend these two books highly enough.

*Small Wonder, by Barbara Kingsolver. Another re-read. I love her essays, particularly the personal stories.

*Red Kayak, by Priscilla Cummings. Another YA. I finished it, so I guess it was okay.

*The Language of Flowers, by Vanessa Diffenbaugh. Interesting story plot, but underdeveloped characters. Lacked credibility but still a fun read.

*Grace (Eventually): Thoughts on Faith, by Anne Lamott. And yet another re-read. Anne cracks me up. Love her.

*John Barleycorn, by Jack London. An autobiography about being an alcoholic while still managing to deny that he’s an alcoholic. The guy had a fascinating life, but about halfway through the book, he started to drone. (Side note: London is a great example of an unschooler.)

*Let’s Pretend This Never Happened, by Jenny Lawson. Fun, but I find her humor tiresome after awhile. My older son loved it.

*Bird by Bird, by Anne Lamott. Another re-read, and, now that I’m trying to write something bigger than a blog post, quite pertinent. Reading about Anne’s writing process affirmed my own, normalizing my angst and helping me relax.

*The Year of Learning Dangerously: Adventures in Homeschooling, by Quinn Cummings. About a mother who decides to homeschool her middle school-aged daughter for one year. The book is well-written and engaging, but I got the impression Cummings was engineering and exploiting her experiences (for example, visiting an unschoolers’ conference and an ultra-conservative homeschool group) for the sake of book material, boo-hiss.

*The Girl on the Train, by Paula Hawkins. A non-scary page turner.

*Motherlunge, by Kirstin Scott. Craftily written (or so they say) but I thought all the pretty words were overkill. I’m in the minority, though—here’s a more positive review—so give it a try.

*11/22/63, by Stephen King. My first King book. It didn’t give me nightmares! (And then I watched The Kennedys on Netflix streaming—highly recommend the eight episode dramadocumentary—and, when it we got to the Oswald shooting scene, I felt like I had already seen it before.)

*On Writing: A Memoir of the Craft, by Stephen King. I enjoy his personal writing more than his fiction. After reading the book, I bought it and the Strunk book he kept going on about.

*Why Not Me? by Mindy Kaling. In the style of Yes, Please!: light entertainment in a hollow sort of way.

*Big Magic: Creative Living Beyond Fear, by Elizabeth Gilbert. Revolutionized how I think about the creative process. Slightly repetitive, but, since my beliefs are so entrenched, I needed the slow pace to mull things over. Highly recommend.

*The Thirteenth Tale, by Diane Setterfield. A novel about a writer and her biographer. The story sucked me in, and for several days I lived in a satisfying haze. (The biographer was always drinking hot cocoa, so I drank a lot of hot chocolate while reading.)

*You’d Be So Pretty If…: Teaching Our Daughters to Love Their Bodies—Even When We Don’t Love Our Own, by Dara Chadwick. Clunkily written (example, see title) but extremely valuable and helpful. It gave me some good tools and much-needed perspective. If you have daughters, read this.

It’s your turn! What thrilling and transformative books have you devoured in 2015?

PS. This blogger has great taste and fabulous book reviews. Every time she posts a write-up, I end up putting a book (or three) on hold at the library.

This same time, years previous: the quotidian (12.23.13), dancing mice, and other Christmas tales, raw, and on doing the dishes.