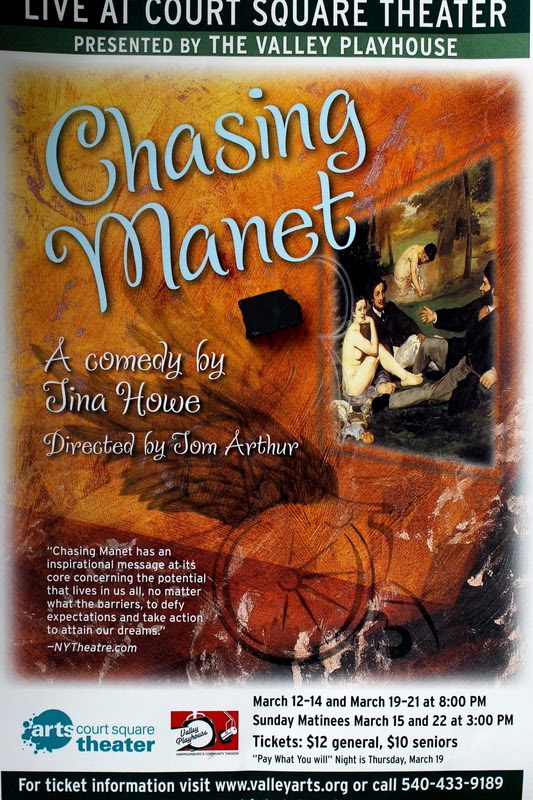 The play starts next week. Two nights ago we loaded into the theater (we had been rehearsing in the sanctuary of a local church), had a tech meeting and pizza, and then did a run-through. It’s always a little disorienting, the first time in the theater. The stage is more spacious, so we have to adjust our blocking, volume, etc. Then there’s the switch from carpet to hardwood flooring. Which isn’t usually a big deal except that this play involves wheelchairs and wheelchairs move much more quickly on hardwood. One of my exists happened a little more speedily than I intended.

I almost didn’t audition for this play. I thought the show sounded slapsticky and dumb. I mean, really, two women escaping from a retirement home? How silly. But then, last minute, I decided to audition, just for the heck of it. I had never worked for this particular director and figured it might be nice to meet him. Since I hadn’t read the script beforehand, I spend most of the audition frantically flipping through the script trying to figure out who was who and what was what. And then the director had me read for “Rita,” and the script said to cry and so I did. I was stunned. I had always wondered how actors cried and there I was doing it. So weird.

Now that I understand the play, I love it. It has depth. It’s authentic and poignant. And it’s really, really funny. You should totally come.

This play has felt more like auditing a class than simply participating in community theater. The director started the theater program at James Madison University and taught in it for the next several dozen years; in other words, experience, he’s got. He’s blunt and impatient, but also encouraging. Often he’s both in the same sentence. For example, “You’re talking into your throat. Stop it now. You have a great voice. Use it.” And you’re left feeling a fool for mumbling but also kind of proud because maybe you have something to offer after all?

The director got wind that a couple of us were interested in doing some extra reading about acting, so he sent me a comprehensive required reading list for his classes, from the beginning acting classes up through the advanced and then some just-for-fun stuff, too. Right off, I got three books from the library. I’m finishing up the second one now. I don’t understand everything I’m reading, but I’m beginning to understand a little more about the acting process and some of the theories behind it.

I’ve spent many hours puzzling over why it is I so enjoy acting. I have many different interests, but acting is fulfilling at a core level. Unlike writing, which requires just my brain, or cooking, which utilizes my hands and leaves my brain idle, acting requires every part of me. I am drawing on all my senses to feel, recall, respond, and relate. There’s the relating to the other actors and audience. There’s the instruction and learning. There’s the physical challenge that reminds me of dance, what with all the blocking and muscle memory. There’s the adrenaline kick that comes from the stress and anxiety of performing. When I’m acting (and it’s going well), I am fully present in the Now. There is zero boredom. It’s electrifying.

So am I just addicted to the rush? Maybe. All I know is if I had my way, I’d act six hours a day. Which makes me wonder: if I enjoy acting so much, why not pursue it more?

Yet, I doubt myself. Up to this point, all my artistic ventures have been fairly private, and theater is anything but. Acting requires so much more than just me: a playwright, a director, fellow cast members, a tech crew, an audience. And it requires the confidence (or stupidity, you pick) to throw myself into the limelight, saying, Here I am! I can do this! Watch me!

And fun. So very fun.