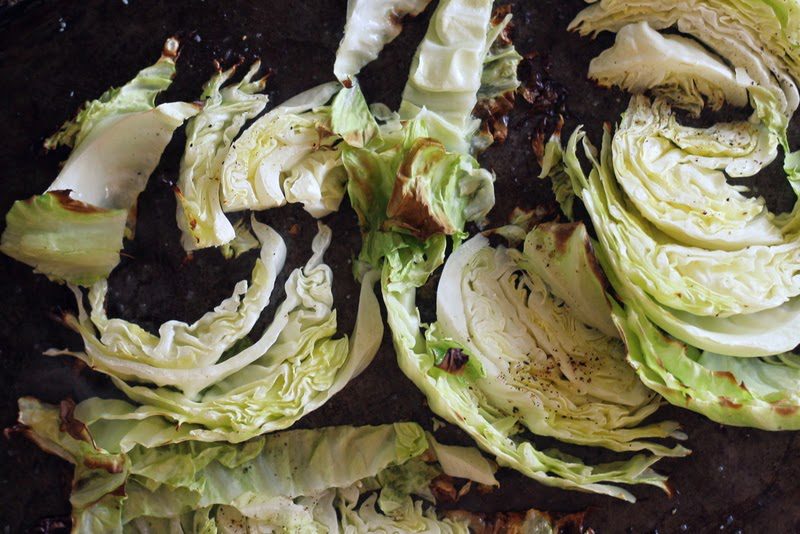 I am striking out all over the place when it comes to making meals that my family enjoys. For awhile there I was a dream mom, serving up the honey-baked chicken, the spaghetti and meatballs with vodka cream sauce, the pepperoni pizza, the egg and sausage bake, the mac and cheese, etc.

But then, all of a sudden, I got sick of it. The meals were too easy! Too predictable! Too boring! Too nice! I missed the weird grains, lentils, and spices, the not-our-standard veggies, the unusual sauces, the from-scratch hearty fare. I missed challenging my family.

See, if I don’t keep hammering my loved ones over the head with broadening-their-horizons eats, they will invariably turn into club-wielding, nose-picking, grunt-grunting cavemen. A mama’s gotta be careful of these things! So I stocked up on little white beans, red lentils, and fresh spinach. And I started push-ush-ushing the envelope. 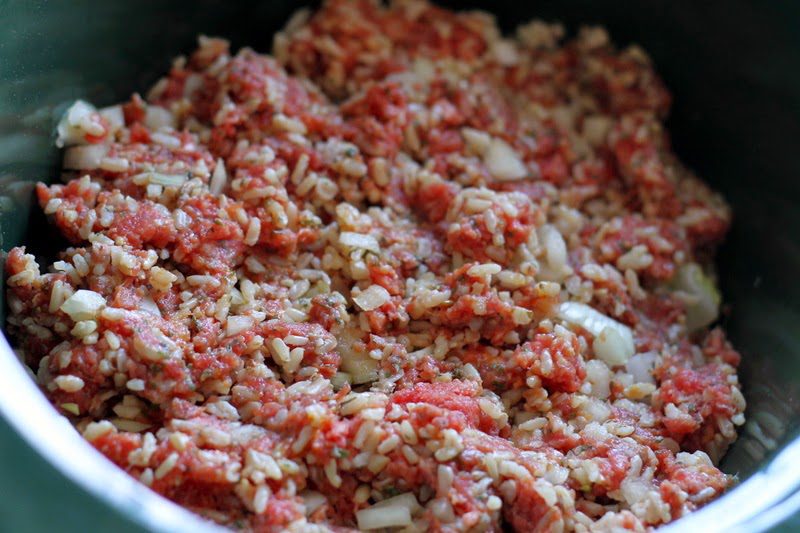 Now mealtimes are pretty much hell. What with all the yell-ell-elling and groan-oan-oaning, one might even go as far as to call them barbaric. 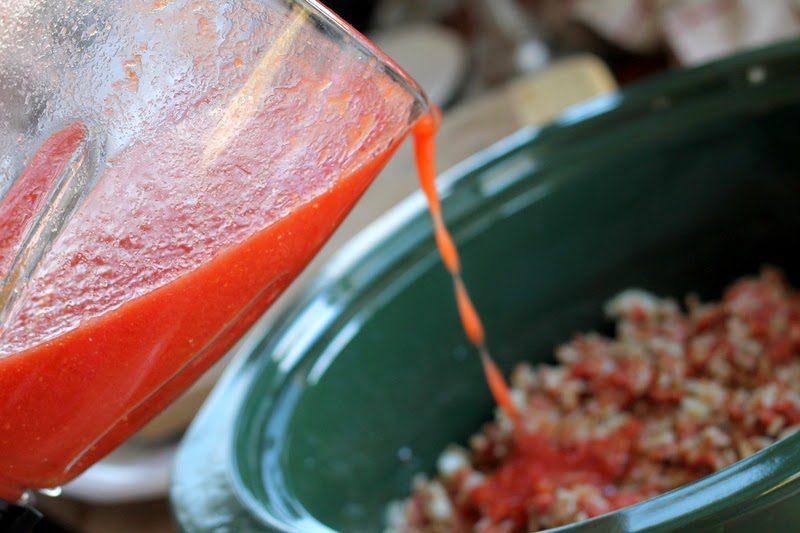 Certainly, a lesser person would admit defeat and wave the white flag. But not me! Onward ho I go, slinging legumes and roasting cabbages. Certain progeny are beginning to look a wee bit peaked, but that’s okay. If nothing else, at least we’re saving money. 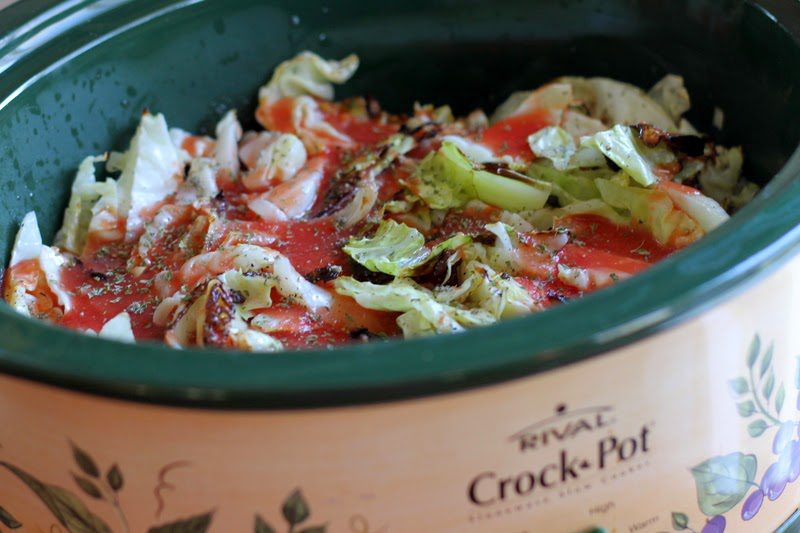 So, Saturday’s supper. In keeping with my general mission of inflicting massive doses of mealtime misery, I made lazy cabbage rolls. I had high hopes. What with the beef and sauce, the family would be sure to like it, right? And I would be sure to get a little buzz from feeding them their evil nemesis (brown rice) and an entire head of knobby cabbage. It could only be win-win.

I was wrong. The masses revolted. Which was royally irritating since the meal was most definitely a gold medal winner, at least in my opinion. I couldn’t stop eating it.

For reals. I’ve been eating the leftovers ever since.

Yesterday my mother stopped by and I fed her the last of the crock pot cabbage. And whaddaya know? She loved it! I almost didn’t know how to interpret her loud moans of delight, so foreign to me are the sounds of mealtime appreciation.

(For those of you worried about my wasting-away children: tonight’s supper is pasta with pesto, peas, pickled beets, and applesauce. They will happily consume one-half of the meal. The other half they will simply consume. Then tomorrow they’ll sup at The Grands and pig out on hot dogs. The next night will probably be pizza. Because I am battle-worn.)

Despite my family’s unfavorable rave reviews, this dish is quite spectacular. The assembly takes minutes (with the addition of the roasted cabbage, which is a fairly mindless step), and the final product is like a rich, very thick stew. 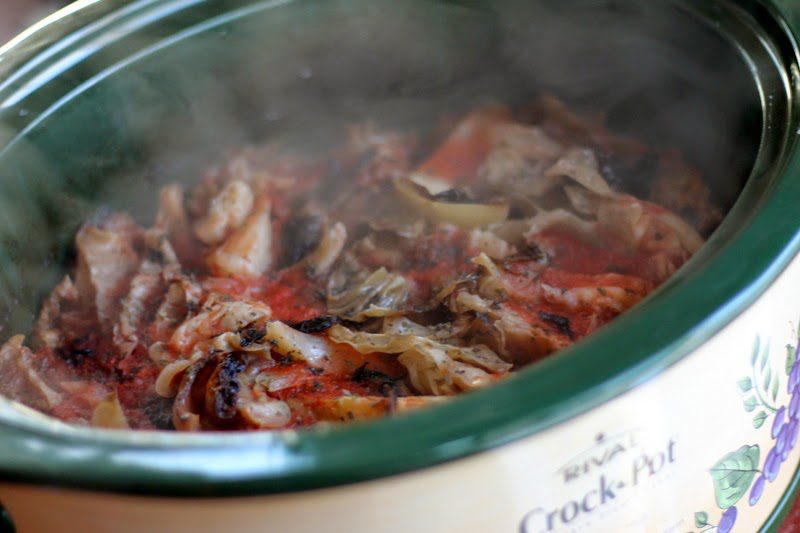 For the cabbage:
Lay the wedges on a baking sheet. Drizzle with olive oil and sprinkle with salt and pepper. Roast at 450 degrees for 20-25 minutes, turning the cabbages over at the halfway mark.

For the filling:
Put the onion, beef, egg, rice, parsley, black pepper, and 1 teaspoon of salt in a large bowl. Combine, using your fingers.

For the sauce:
Whirl the tomatoes, garlic, sugar, vinegar, and the remaining teaspoon of salt together in the blender.

To assemble:
Pour half of the tomato sauce in the bottom of your crock pot. Place half of the cabbage on top. Evenly distribute the meat over the cabbage (as you would the topping for an apple crisp—in other words, don’t pack it). Arrange the remaining cabbage wedges on top. Drizzle the remaining sauce over all, and sprinkle with some dried sage, if desired.

Cook on high for six hours.

Wear earplugs to the table so you don’t have to hear the kids fuss.

This same time, years previous: the quotidian (1.20.14), on the relevancy of growing onions, world’s best pancakes, multigrain bread, moving forward, chocolate cream pie, on thank-you notes, and on not wanting.