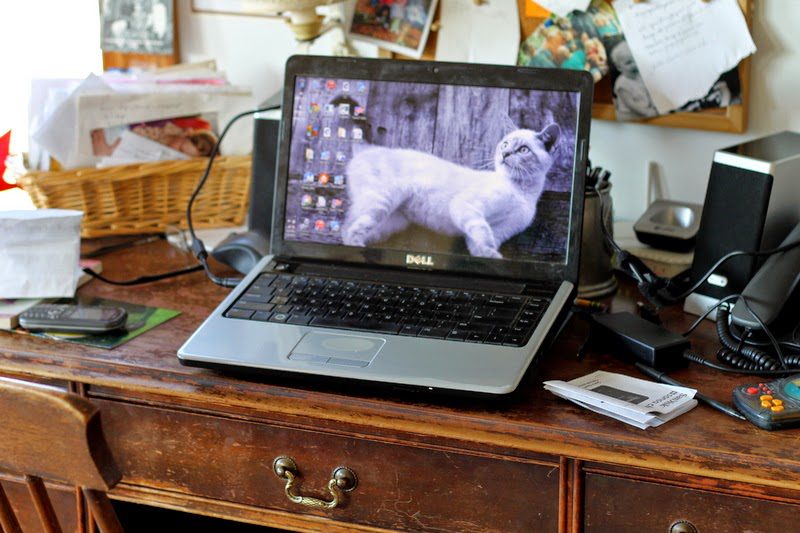 My father has set a goal to write one hundred 100-word essays. He usually writes them in the morning, sitting at his desk in the study. The other evening when we were at their house for supper, he let me read some of them. (Actually, I didn’t know about this little practice of his until that evening—and he’s been working on them off and on for a couple years—and only because Mom mentioned it.)

Here’s one of my favorites:

So, is a suitable shoe at Bon-Ton? We’ve been here two hours. Do shoes create self-image?

Never mind that last night’s temperature, 15°F, portends the winter to come. Only slip-on shoes with low sides or no backs will do. At least the toes are pocketed! Whatever she chooses, she’ll be graceful, herself.  After a snow, I’ll shovel a path to the car, an elegant path for elegant legs ending in elegant shoes.

She’ll shiver and fiddle impatiently with the heater’s knobs, but when we enter the theater, she’ll be queen, having defied the elements in her wonderful shoes.

I struggle to teach writing. Aside from, “Do it a lot and you’ll get better,” I don’t know what else to say. One of the guys in our small group is a high school English teacher. Sometimes he tells us about a lesson he taught and I’m invariably amazed and fascinated and inspired. Such creative explanations! Such perfect metaphors! Such probing questions!

But at our house we’re back at square one, battling the run-on sentence and possessives. I don’t have the terminology—the facts—to explain the stuff clearly. I don’t know the rules. Prepositions? Ha! I hardly even know what they are, let alone why they matter. So we (meaning, my older son) did a grammar workbook and some spelling stuff. Handwriting, too. It all helped, but only marginally.

Several months ago, I settled on the most basic thing possible: daily writing. I give my son a topic, set the timer for 30 minutes, and set him loose. The only rules: solid sentences and be logical. When the timer bings, I read over his writing and we correct it together. I’ll say things like, “There are three run-ons. Find them.” Or, “Do you know the rule for when to spell out numbers?” And then we discuss and correct. Sometimes he spends another 15 minutes rewriting or fine tuning. Other times, we save an underdeveloped idea for the next day’s writing.

As for topics, I sometimes ask questions based on what’s been going on; for example, “What did you do over Christmas break?” Sometimes he writes a letter or email. Other times I use this page as a springboard for thought-provoking questions. I try to strike a balance between narrative (easy), comparison-contrast (super hard, logic-wise), persuasive, etc. Bit by tiny bit, he’s improving.

He wrote this one last week. It made me laugh out loud.

How do male and female roles differ in your family?

The kids sometime think that the mother is cruel to the father, but then the father yells at the kids and they change their minds in an insistent. The mother’s never persuaded to do what she doesn’t want to do. She rules with a staff of thunderous might, always telling the children or the husband that they need a move on in life, or that they are being lazy, or come say ‘what next.’ The father, on the other hand, is a mighty man who, even though he stands close to six feet tall, can never stand up to the mistress of the house. When the mother leaves, the selfish children are excited because they get to stay with the father, and because he might let them watch a movie. The father never really does all the chores the mother tells him to do, because he always stumbles on to a good article or the selfish children throw a hellish fight. During the fight the father yells at the mouthy children and says, “THERE IS NO MOVIE FOR YOU NOW.” Naturally then, the children fall apart and that’s the end of a good evening.

Recently, I had to write a 100-word essay. Actually, it wasn’t an essay, per se. More of a description of a seminar I’ll be giving. I spent an afternoon mulling over the topic at hand, re-reading old posts I’d written, and watching a TED talk on the art of giving presentations. And then I sent a couple rough drafts to my mother and we spent another good while hashing out the finer points over the phone. All for 100 (less, actually) words. HOW DOES ANYONE EVER WRITE A BOOK?

What is learning? How does it happen? This often-fraught homeschooling mother of four will share her stories. This seminar is for a) anyone who has children or plans to have children, b) educators, and c) both homeschoolers and people who are appalled at the mere idea of homeschooling. Myths will be debunked, the status quo challenged, and horizons broadened. Everyone welcome!

(This seminar will be one of the many offerings at our church’s biannual convention in Kansas City this summer. More information forthcoming.)

***
Do you write daily?
Do you have any good pointers for teaching writing skills?

This same time, years previous: when a scholar marries a hunk of reality, on being burned at the stake (or not), day one, the quotidian (1.16.12), snapshots, Julia’s chocolate almond cake, and five-minute bread.