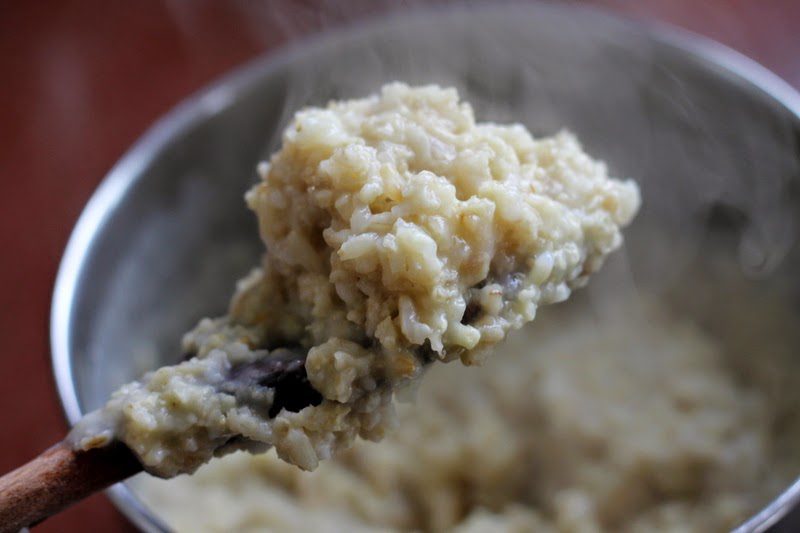 The January issue of Bon Appetit arrived a week or so before Christmas. It was chock full of healthy, light recipes, and in the midst of the sugar and butter glut, each page was like a breath of fresh air. Most of the recipes, however, were decadent in their over-the-top expensive ingredients and complicated procedures. Green smoothie with almond butter and flaxseed oil and agave syrup and matcha and—? It was again too much, just in the other direction.

Still, I’m pretty good at hacking away at the fru-fru fluff and getting down to the heart of the matter. Or the heart of the recipe, as it were. So when my eyes lighted on a 5-Grain Porridge with Bee Pollen, Apples, and Coconut, I skipped right over the bee pollen part (because yeah right) and headed for the freezers to take stock of my Weird Grain Collection. I didn’t have all the grains, but the headnote was generous about my inadequacies. “Use what you’ve got—just bump up the quantity,” they said. So I did, and the porridge was lovely.

The topping, the apples and coconut, while obviously rather irrelevant, did sound interesting. Plus, I had some softening apples on the windowsill and some large-flake, toasted and sweetened snacking coconut in the pantry. It was worth a shot. 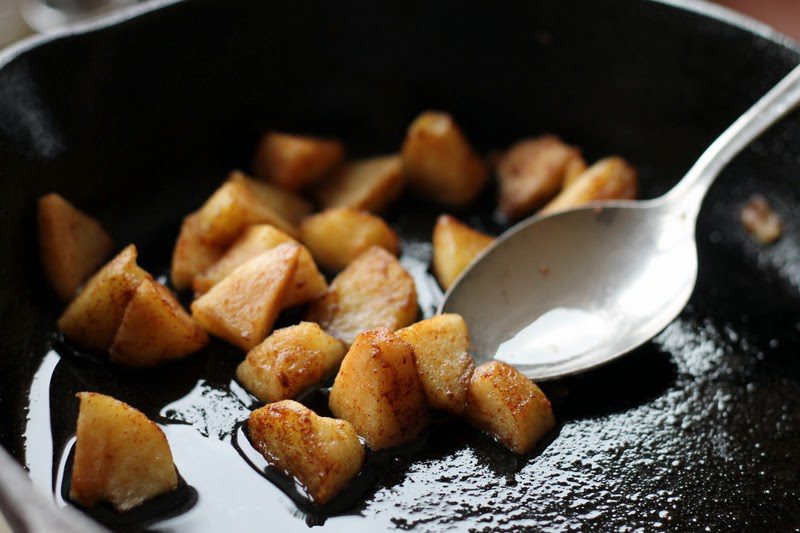 And it was worth a shot. The sauteed apples, cinnamon, and coconut were so delicious that they pretty much defeated the purpose of the porridge. I mean, isn’t porridge all about eating healthy, sparingly, lightly? Because here I was fighting off urges to pig, gorge, stuff myself. The situation seemed rather counterproductive. And positively delightful. 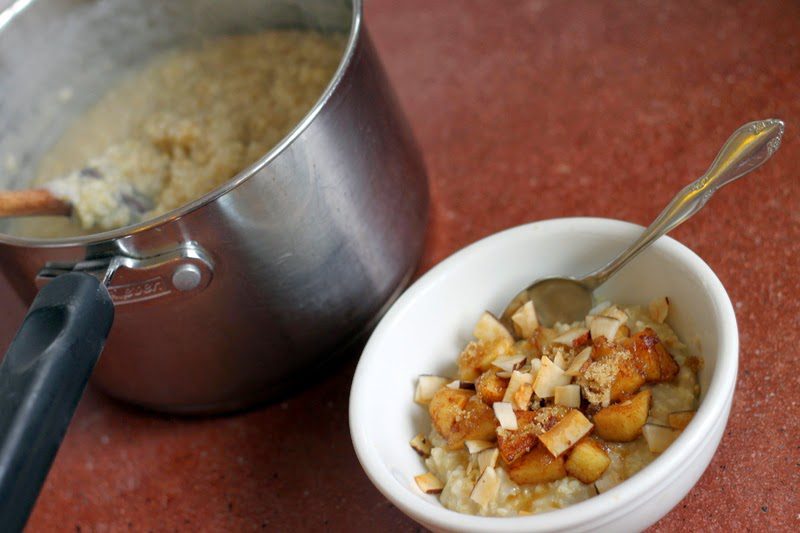 PS. My husband abhors oatmeal, steel cut oats, polenta, etc. Yesterday morning I coaxed him into eating a bowlful of this porridge. While eating, he accidentally made mm-mmm noises. We were both startled.

PPS. And just as I finished typing that last paragraph, my husband went to the kitchen to fix his morning bowl of granola and said, “I’m surprised you didn’t make me that porridge this morning. It was pretty good. It filled me up till 2 o’clock. Not that you give a rat’s heinie.” (Because I am typing this and ignoring him.) “For a bowl of oatmeal, it was all right. It has the John Murch seal of approval.” 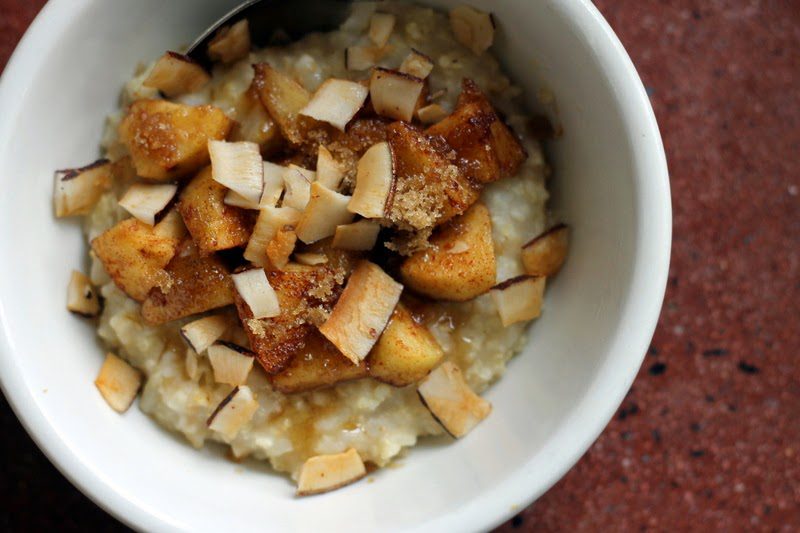 5-Grain Porridge with Apples
Adapted from the January 2015 issue of Bon Appetit.

For my first round, I didn’t have quinoa, amaranth, or wheat bran, so I added oat bran and steel cut oats. I like the idea of a wide variety of grains, though, so I may actually go out and buy some amaranth and quinoa before I make my next pot of porridge.

This recipe makes a large amount of porridge and only enough apple-coconut topping for about two servings. Either increase the amount of topping, or just make more when you need it (I’ve been doing the latter).

Update: leftover porridge is marvelous when used in place of the cooked cracked wheat in these pancakes.

for the porridge:
½ cup each brown rice and quinoa
¼ cup each amaranth, millet, and wheat bran
¾ teaspoon salt
6 cups water

Combine all ingredients in a saucepan. Bring to a boil. Reduce heat to medium low and simmer, partially covered, for 30-50 minutes, stirring frequently. (They say it takes 40-50 minutes, but mine was done at the 30-minute mark.)

Melt the coconut oil in a skillet and add the apple chunks and cinnamon. Stir once and then let the apples cook, undisturbed. You want them to get caramelized, not mushy. Once they are brown on one side, give them a stir and let them cook on the other side.

to serve:
Spoon some porridge into a bowl. Add half of the apples and coconut, and a spoonful of brown sugar. Top with cold milk.

This same time, years previous: constant motion, the quotidian (1.2.12), not a true confession, lentil sausage soup, baguettes, loose ends, of an evening (and a morning), cranberry sauce, and when cars dance.