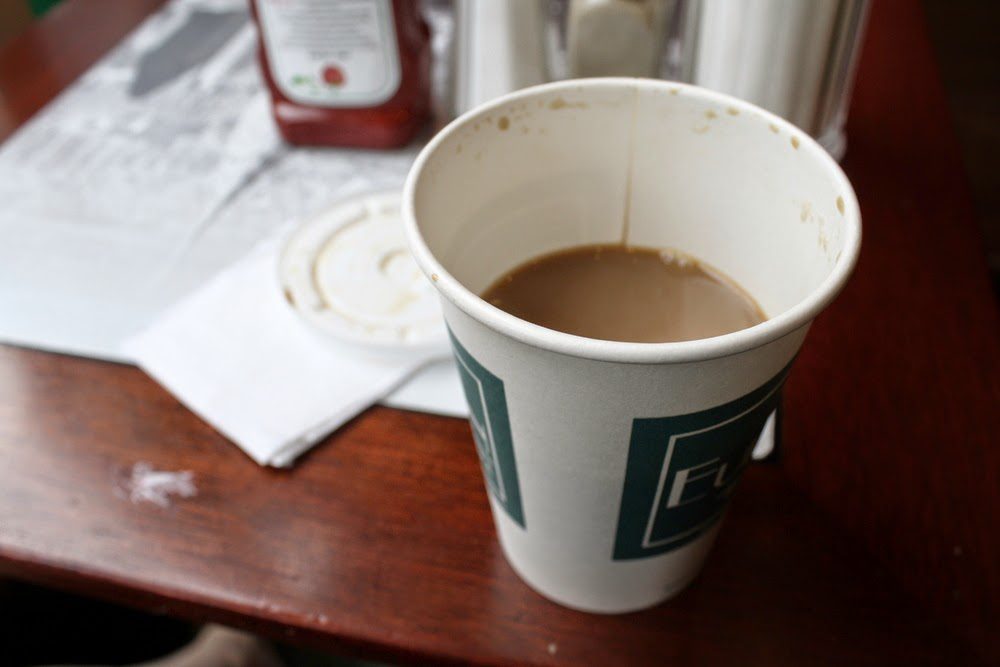 I’m sitting in a coffee shop. All that’s left of my latte is a puddle of cold fuzz. It’s gray outside. My feet are cold. (I have a bird I love to hold…) It’s easier, and a lot more entertaining, to watch people than it is to write. Writing bores me. Heck, I bore me. I have nothing new to say.

Ben recently wrote that he hardly ever edits what he writes. He just sits down, usually without a clear idea even, and types for a bit before hitting publish. And I’m all like, Wha—? No edits? No woodpeckeresque backspacing? No resorting to chocolate and Facebook?

The way I see it, I have two strikes against me. First, it takes me a long time to write anything. Second, I don’t have any ideas. I might as well just give up now.

I recently won a new cookbook. When it arrived, I settled down at the table to have a look-see. It didn’t take long for my excitement to turn to dismay. The book was, quite frankly, horrible. Everything about it was cliché and over-simplified. (How’s that for over-simplification?) For example, one of the recommendations for sprucing up a kitchen is to spend thirty minutes doing a thorough fridge cleaning. As in, uplug the beast and pull it out from the wall to scrub its backside, sort, trash, and compost the containers of food, soak the drawers and disinfect the shelving and walls all in thirty measly minutes. Unless they were confusing a college mini fridge with the standard big box, I don’t think so.

Furthermore, any book that encourages me to not sweat the cleaning and instead light a candle in the bathroom in hopes that no one will turn on the lights is not to be trusted. Since when does anyone go into an unfamiliar bathroom and not turn on the lights, candle or no? When I mentioned that nugget of bathroom advice to my husband, he was all like, Ew, gross!

What’s the value in making things seem easier than they are? In the case of this cookbook, the answer is money, I guess. The easy way out is what sells.

It’s all a bunch of lies, though. There is no easy way out. At least not for the good stuff. Cooking takes time. Cleaning takes time. The satisfaction you get out of something is in direct proportion to what you put in. Why, just this afternoon, I was ranting to my son, Stop trying to take the easy way out! Sweat! Push yourself! (Humph. Appears I am my own cliché.)

So why do I think my writing should be easy? Why would I want it to be?

The more often I do something, the easier it becomes. Well, kind of. The doing action is easier, but it’s still a head battle to apply myself. Once I commit to the work, the battle’s mostly won.

Some days I don’t win very many battles. Instead of cooking the farro and chopping the spinach, I eat the jelly beans. Instead of cracking that book with the unfamiliar author, I idly scroll. Instead of popping out of bed, lacing up my sneakers, and trotting down the road, I shuffle around in slippers, grumping at the other humans cluttering up my personal space.

Soon I’ll toss my paper cup in the trash and head home. After a supper of spaghetti carbonara (perhaps I’ll add spinach?), I’ll reread this post. Maybe I’ll decide to delete it. Before bed, I’ll straighten up the house. Perhaps I’ll toss that disappointing cookbook in the box that’s destined for the thrift store.

Because it’s always possible that my easy is someone else’s hard.

This same time, years previous: how are you different now?, laid flat, homeschoolers have it tough, and lemon squares.