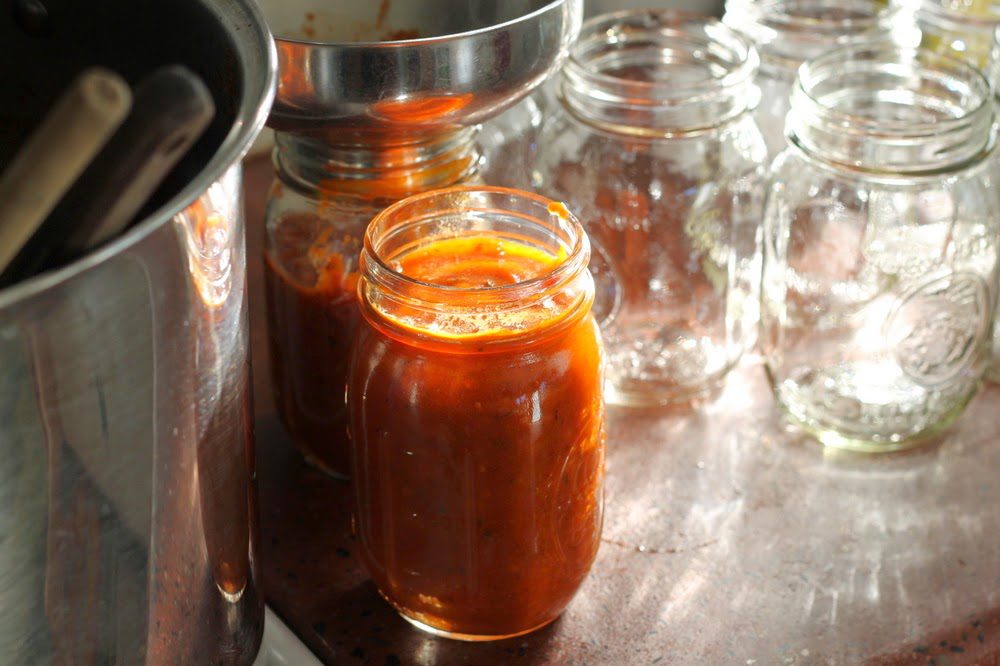 Yesterday morning I picked the red raspberries. I do this every other morning for a couple months, quitting either when I’m sick of them or the season ends, whichever comes first. The berries were late this year, but now they’re making up for lost time. I get two quarts, maybe three, every picking. It adds up.

While I was strategically worming my way over, under, and through the briars in search of every single berry, I thought about the other red fruit we’ve been picking: tomatoes. In the same amount of time it takes me to pick two measly quarts of berries, my husband can pick two to three five-gallon buckets of tomatoes. With such a discrepancy in size and quantity (less is more, right?), you’d think the berries would be light years ahead in taste. But they’re not. I probably prefer the tomatoes.

Every couple days, my husband staggers in from the garden under a fresh load of tomatoes. One of the kids lays them out to finish ripening on the table in the downstairs bedroom that is not a bedroom, and each morning I roast a batch of tomatoes for sauce.

The process feels classic in its straightforward simplicity. I halve the tomatoes, oil them up real good, and cram them into two big baking trays. I scalp a head of garlic, pour golden olive oil into the papery crevices, wrap it up tight in a piece of foil, and tuck the silver ball down among the tomatoes. As the vegetables sizzle and blacken in the oven, the kitchen turns steamy and unbelievably rich-smelling.

A couple weeks ago I did several batches of the basic roasted sauce. This week has been dedicated to roasted tomato and garlic pizza sauce. Six pints there, thirteen pints here. It all adds up.

Tomorrow I plan to turn an entire bushel of Romas into salsa. In preparation for the marathon chop session, I’ve been stashing the ripest of the tomatoes in the fridge, but even so there’s a bunch more on the verge of turning. In this heat—how weird it is to actually be hot!—the tomatoes ripen fast. Unlike my leisurely saucing-making process, the salsa project will be much more overwhelming. Come morning, I’ll set the kids up at the table with cutting boards anchored on ratty towels (to prevent slippage and to catch the juicy run-off) and we’ll have ourselves a party. If all goes as planned, at the day’s end we’ll have twenty more quarts of tomato product to add to the basement shelves.

Earlier this week, I bought a two-liter bottle of red wine for a spaghetti sauce. The wine was cheaper in the bigger bottle and I figure we could use a double batch of sauce. We sure do have enough tomatoes. The bushes are still loaded. My husband says we haven’t even yet reached the halfway point. The way I see it, I have at least two weeks, maybe three, of tomato puttering in my future.

Which is fine by me. Tomatoes and raspberries: they are a nice way to close out the growing season.

This same time, years previous: they’re getting it!, pasta with lemon-salted grilled zucchini and onions (we ate this for supper this week, but I added a few grilled sausages, YUM), 2011 stats and notes, and pesto.