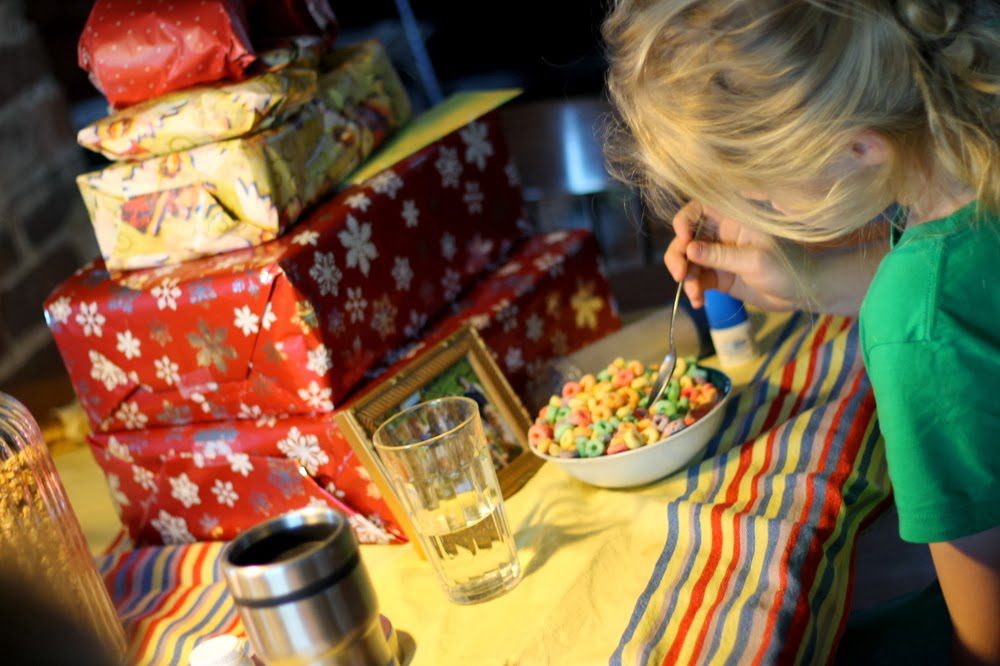 My younger daughter turned ten on Friday. (Or, for the detail accurate among us, two and a half. Her real birthday is February 29.) Ten is a big deal in our family. It is the one (and so far only) time that a party is allowed. Because the Friday party coincided with the real birthday, we had to do a little shuffling of tradition. Instead of the typical birthday supper complete with cake and presents, we had a birthday breakfast.

We ate Fruit Loops (gag), unwrapped gifts, and read her growing stack of birthday interviews. Afterwards, the birthday girl, freed from studies and chores, went off to play with her new treasures while the other children and I went about our normal routines. 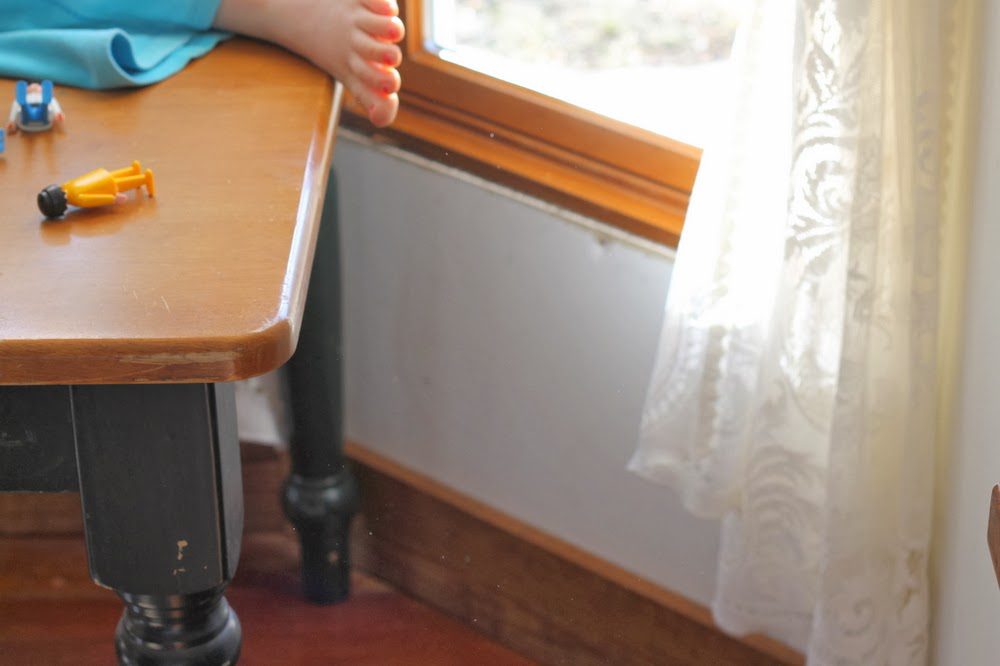 I wasn’t sure how I’d feel about the schedule shake up, but turns out I loved it. Opening the gifts at breakfast eliminated a day of waiting/dreaming/moping, all of which generally pile up into a mass of stress because what if reality doesn’t measure up to expectations? Plus, there is never enough time to play with the gifts after the supper. The whole evening always feels so rushed. 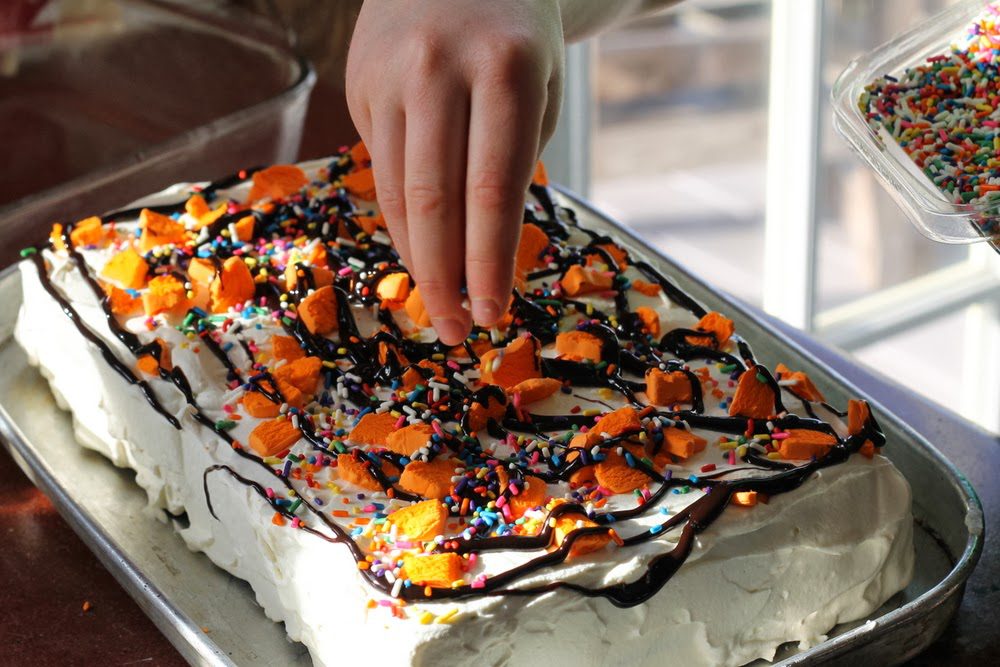 As requested, ice cream cake with circus peanuts and sprinkles.

For the two previous birthday parties (party one and party two), we’ve allowed the non-birthday children to invite one friend to the festivities. This year, however, we farmed the other kids out. They are getting older, so a younger sib’s party isn’t quite as entrancing as an older one’s. Also, it’s wintertime, and I couldn’t bear the thought of more children crammed into this house than was absolutely necessary.

At six pm, seven little girls descended on the house. The next couple hours were event driven: supper, cake, presents, piñata, but then they finally settled into a chatting and giggling grove. 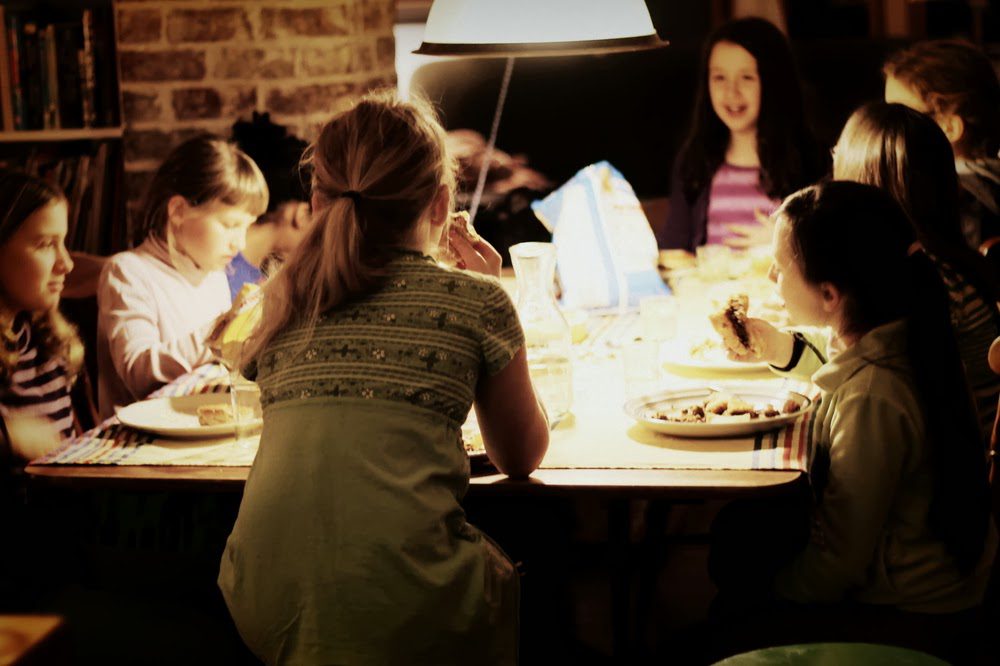 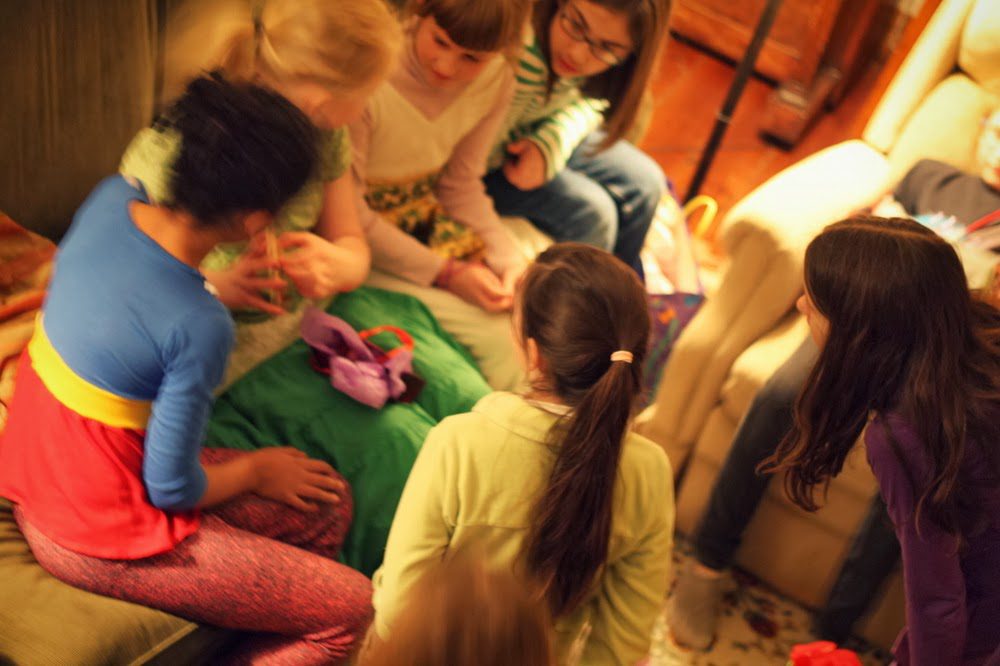 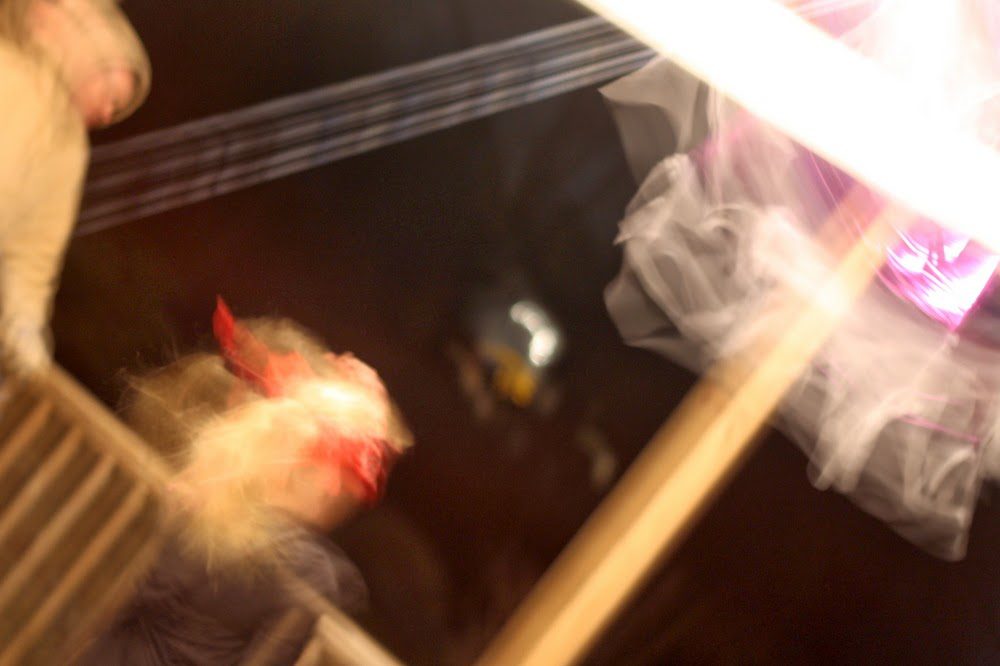 They were up early the next morning (of course). When I called them to the table for breakfast, they gathered around the raclette maker, apprehensive. But after the briefest of explanations, they dove right in, drizzling olive oil, frying bacon, sausages, and eggs, and broiling the cheese. Partway through the leisurely meal, I produced a pan of cinnamon sugar bread sticks. (I didn’t serve them right at the beginning for fear they would fill up on bread while waiting for the bacon to fry.) 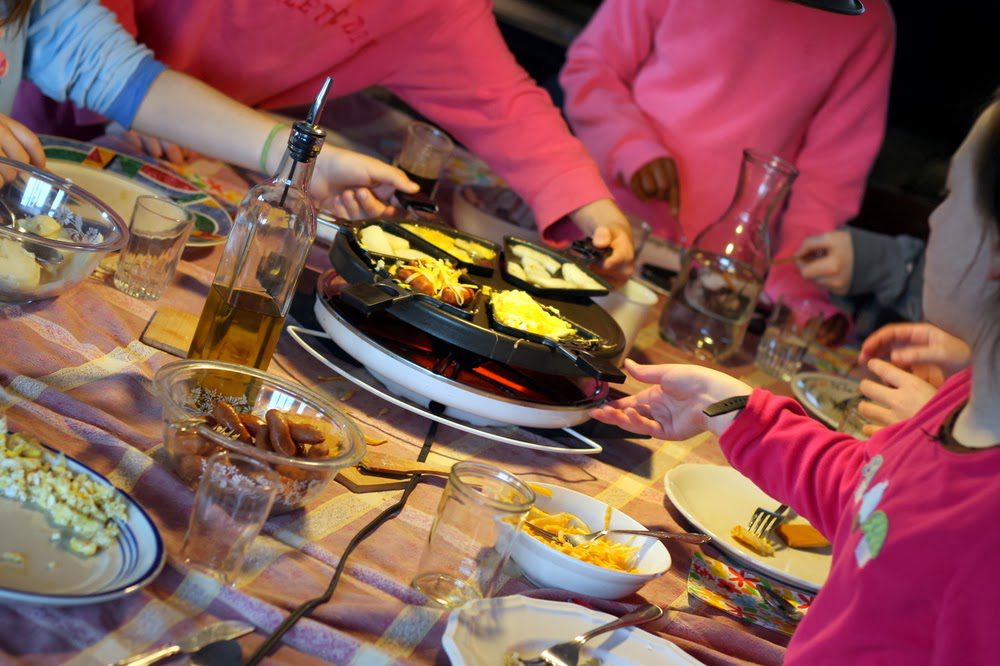 The whole shebang was fairly laid back and low-key. There weren’t any jealous siblings to fend off. The girls entertained themselves and each other. The special food was simple (hello bags of chips, raw veggies and ice cream cake), and the mess was contained to the downstairs so clean-up was swift and painless.

Most of the time, I just sat back with my husband and listened to the chatter. I know the parents much better than the children, so it was fascinating to watch their little, growing up people. I saw traces of the parents in each child—their mannerisms, stories, values, etc.—but there’s no doubt about it: each girl is very much her own person. 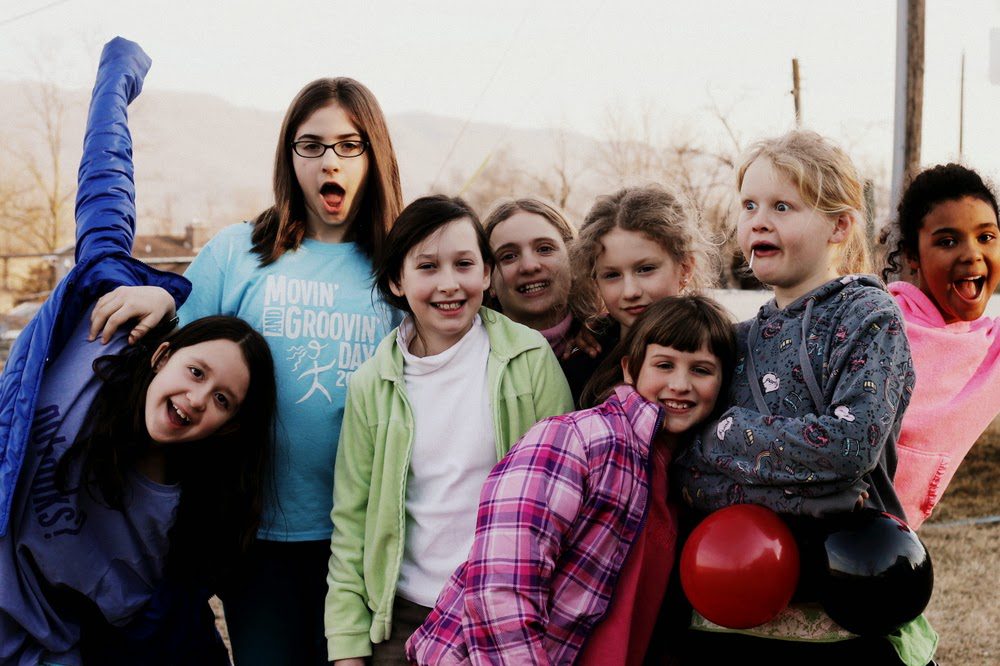 And oh, the things that come out of their mouths! One child has eaten termites and compared their taste to arugula. (What other nine year old do you know who compares taste experiences to arugula?) Another drinks olive oil straight up and proved it to us. Still another asked permission to eat a piece—a piece!—of piñata candy.

Which brings me to what my husband and I refer to as The Birthday Phenomenon. At both of my girls’ parties, upon violently smashing the piñata to bits (and mildly bickering about whose turn is next), the girls dump all the candy into a pile and divide it out evenly. In fact, at this most recent party they were so concerned with dividing it just so that they turned the leftover pieces over to us unsolicited. 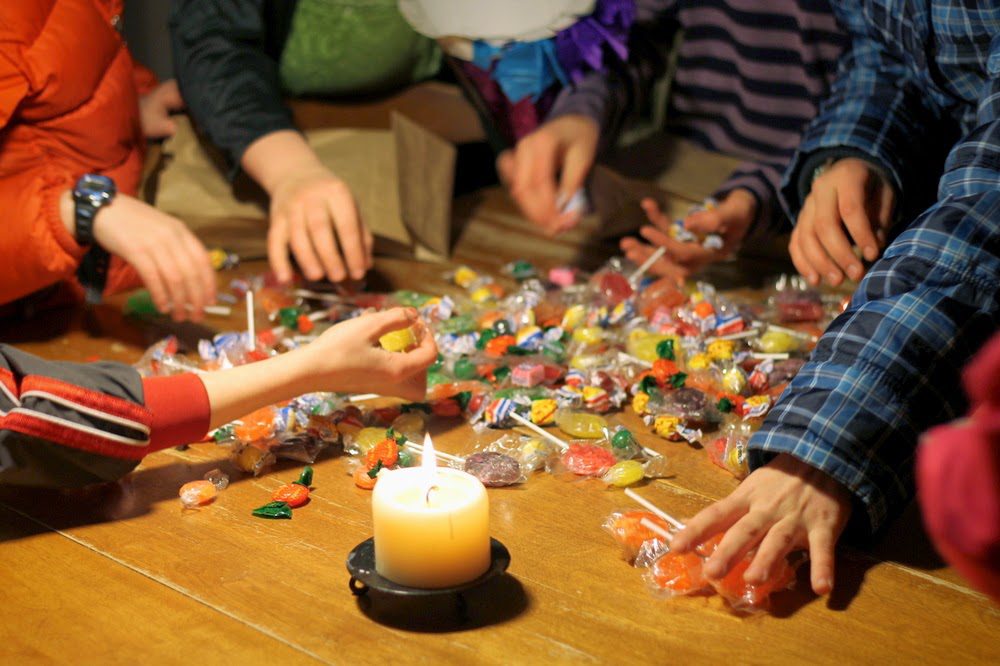 The Great Divide did not happen at my son’s party, nor have I ever seen it in any other setting where male children were involved. Do all girls everywhere do this? Is it young Mennonite female specific only? Has there ever been a scientific study on the piñata candy habits of boys and girls? If not, I suggest one be done. 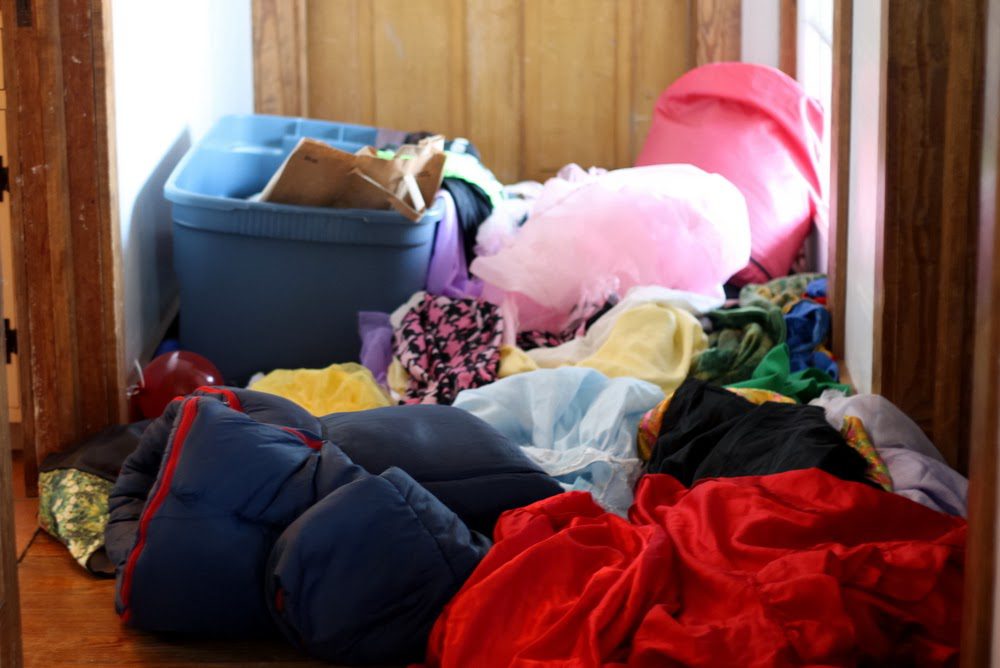