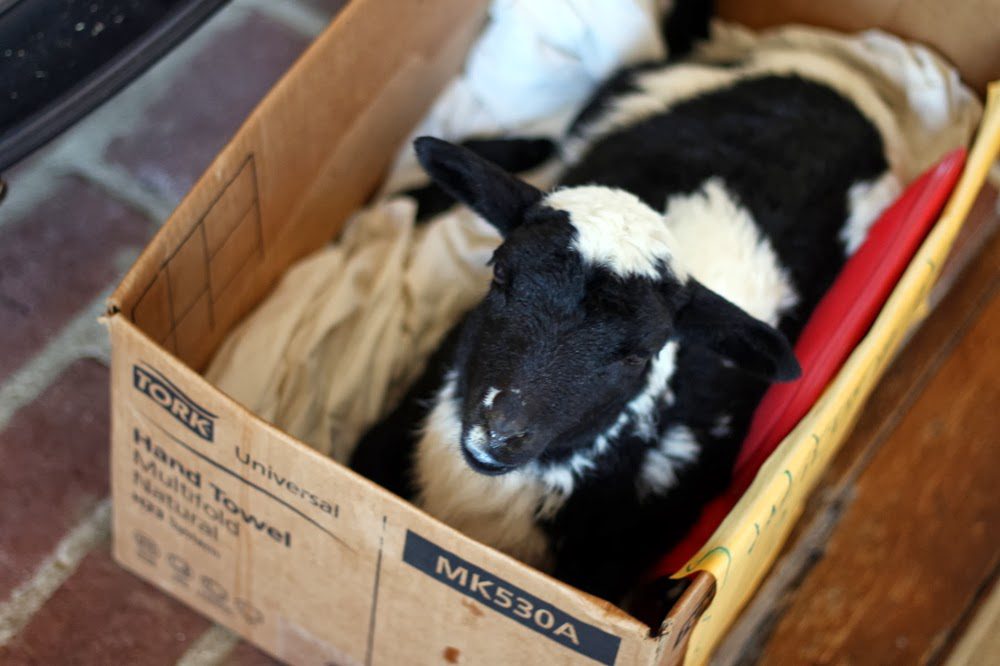 When lambing season started this year, we told our lamb farmer friends that we would take a rejected lamb should the need arise. This would be our older daughter’s project as she’s our resident animal lover and beggar of all creatures farm related: cow, goats, sheep, llamas…

The call came yesterday. It wasn’t from the farmers we knew, but through the aunt (or mother? neighbor?) of a friend of a friend. There was a mad dash for bottle and milk replacer, old sheets, box, books on raising sheep, and hot water bottles. In no time at all we had a lamb in a box by the fire. 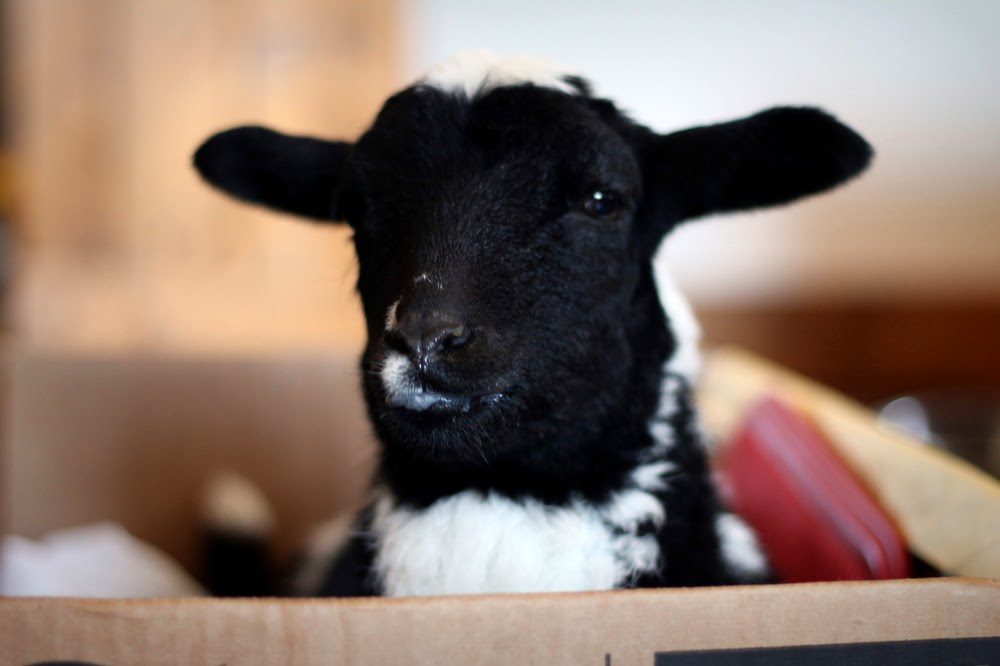 The children were ecstatic. They couldn’t keep her hands off her thick black-and-white pelt. My daughter immediately named her Oreo and called all her friends to tell them the good news. 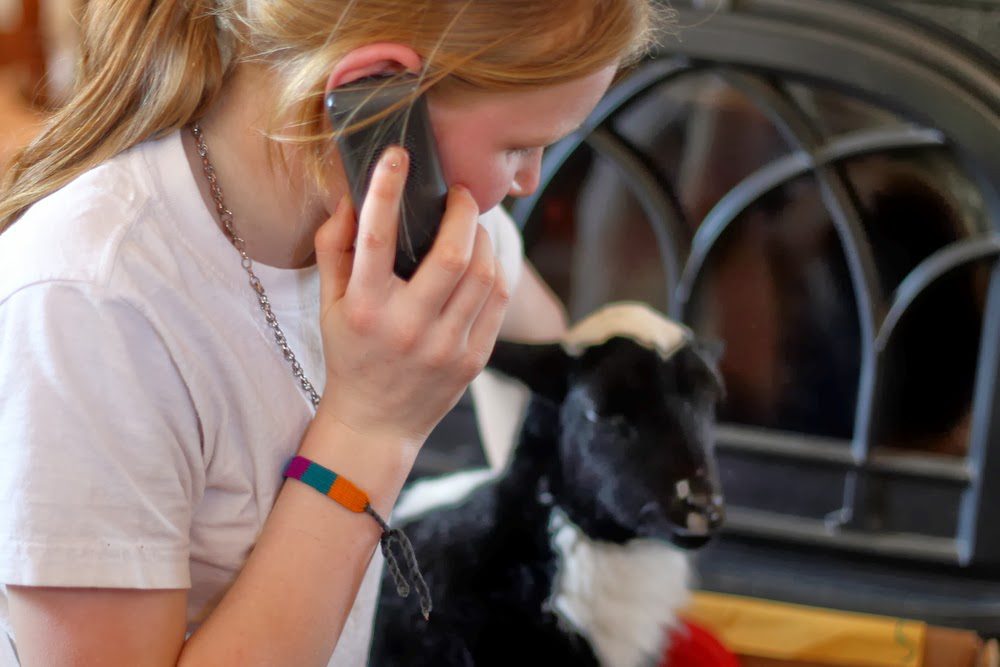 The lamb was bigger than we expected, and she came with no history. She had been walking the day before, but hadn’t been able to stand since. She refused to suck. No one knew what was wrong, and with the original owner heading out of the country, we had no choice but to wing it. 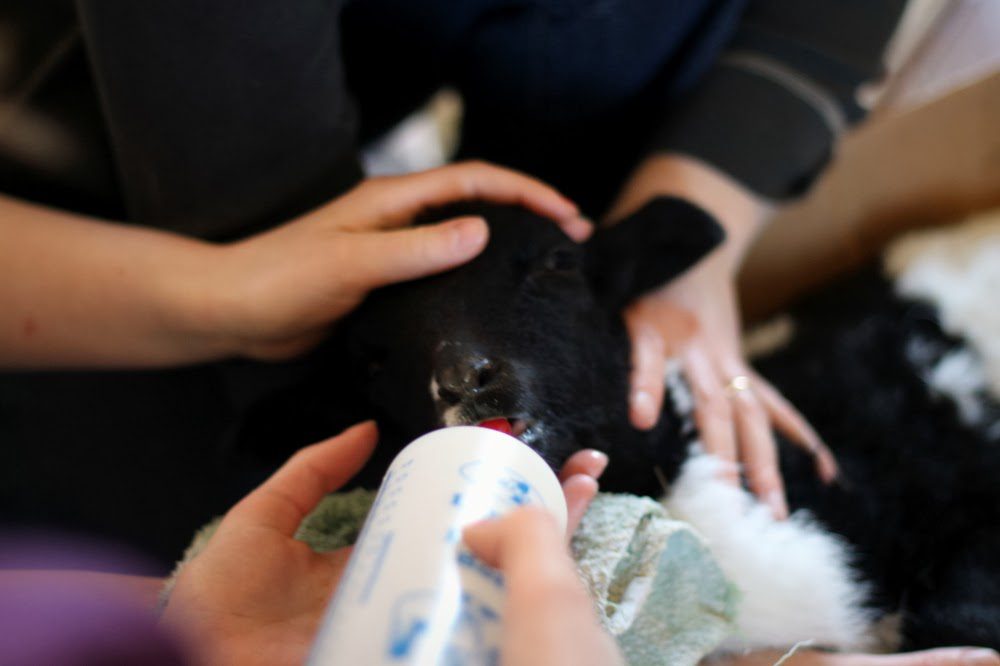 One of our lamb farmer friends stopped by to check her out that evening. She was a hair lamb, he said—raised for meat, not wool—and she was probably two or three weeks old. There was no sign that anything was wrong, just weak. And with no background story to fill in the gaps, well… 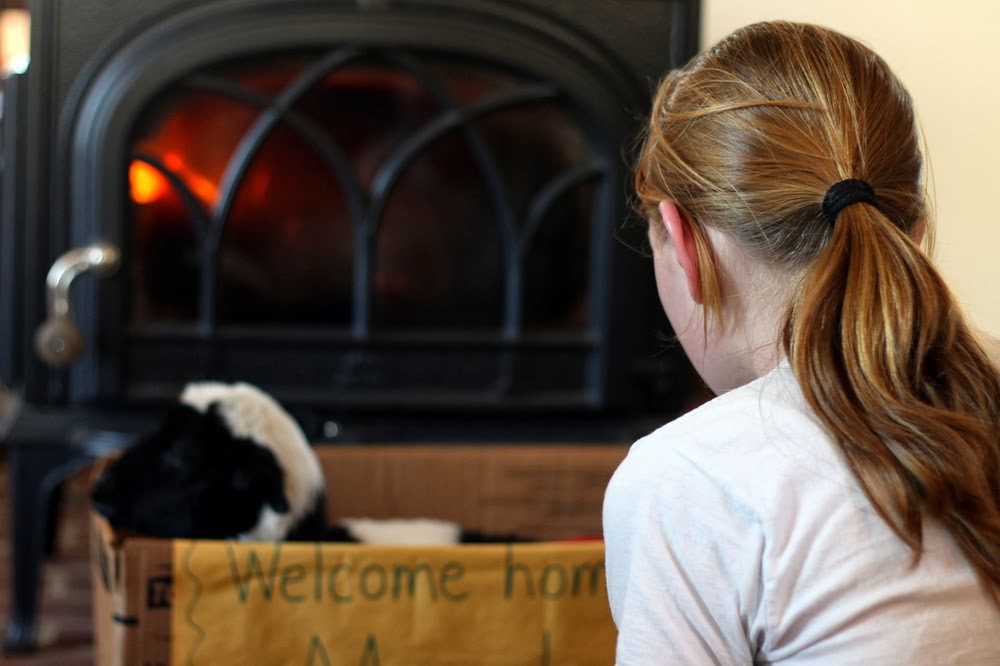 So we gave her formula and a vitamin mix, recording each feeding as we went along. But then she started this weird thing where we’d feed her and she would act completely dead for five minutes. Should we feed her more? Were the feedings shocking her system? We had no idea, but things weren’t looking good. 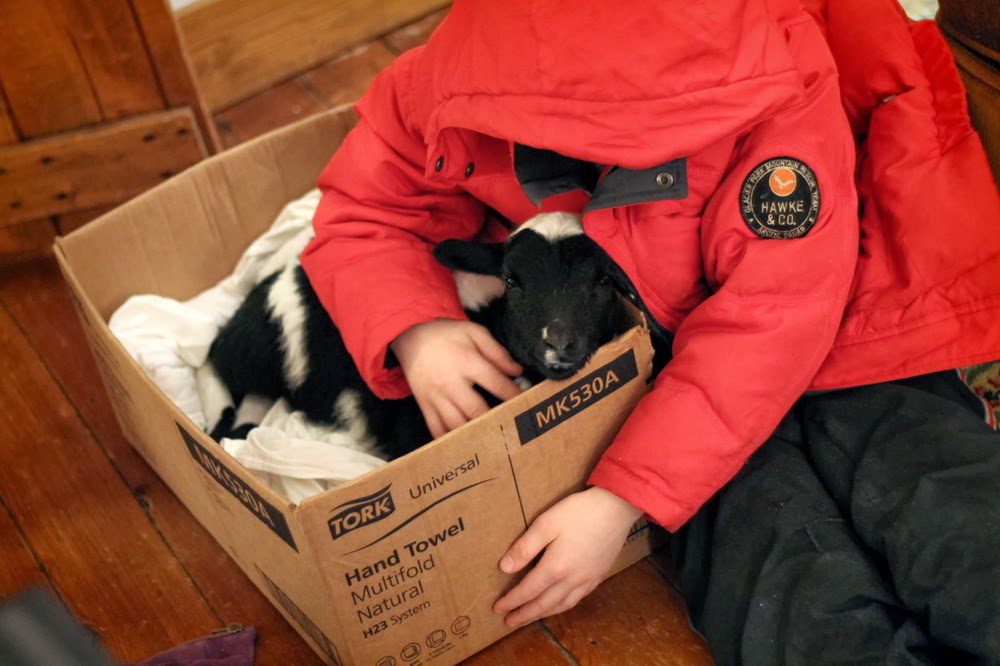 That evening another lamb farmer friend came over with his plastic box of medicines. He showed us how to insert a feeding tube into Oreo’s stomach—it was like having James Herriot in my very own living room—and he gave her mineral oil. 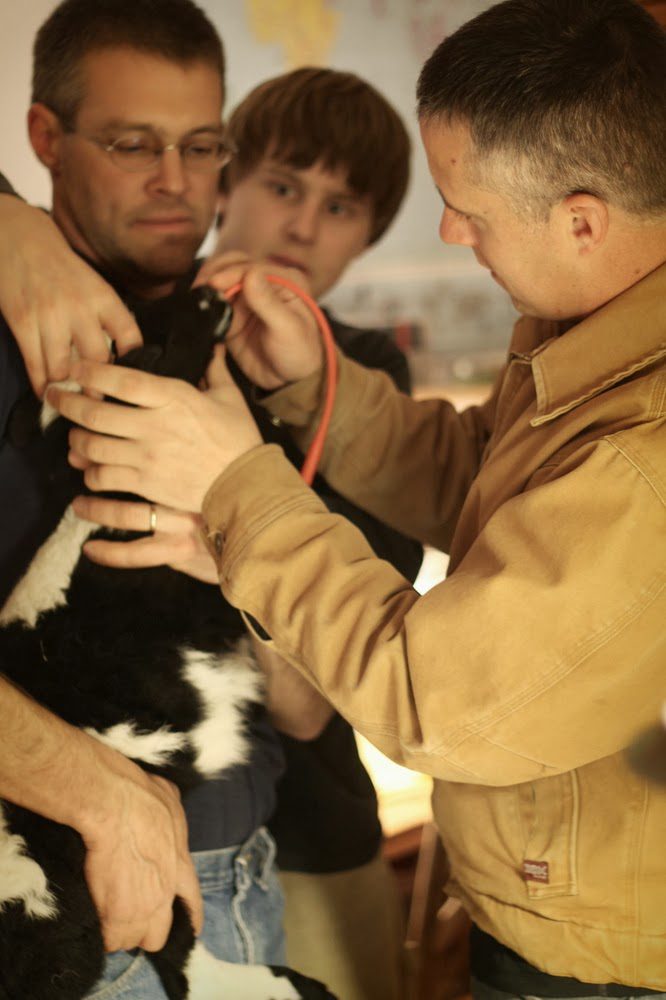 He said that lambs are tricky business. It could be a vitamin deficiency, toxicity from too much grain (if she had indeed been given grain), or simple dehydration. He left us with an assortment of lamb supplies, not much hope, and the suggestion that we try enemas.

So now I know how to do enemas on lambs. It’s amazing what a person is capable of learning when she has to.

The original plan was for my daughter to be responsible for any lamb we got, but because Oreo was fading fast, we sent our daughter to bed and my husband slept downstairs with the lamb. When I came down at four-something in the morning, he was sitting in her box, her head on his lap.

She hadn’t drunk more than a couple ounces of milk. She hadn’t pooped. Her eyes were glazed. Should we be trying harder? Should we let her go? There was no way to tell. I gave her another enema, and we inserted the stomach tube for another feeding. We watched her closely. If she rallied, even a little, it would be reason to press on. 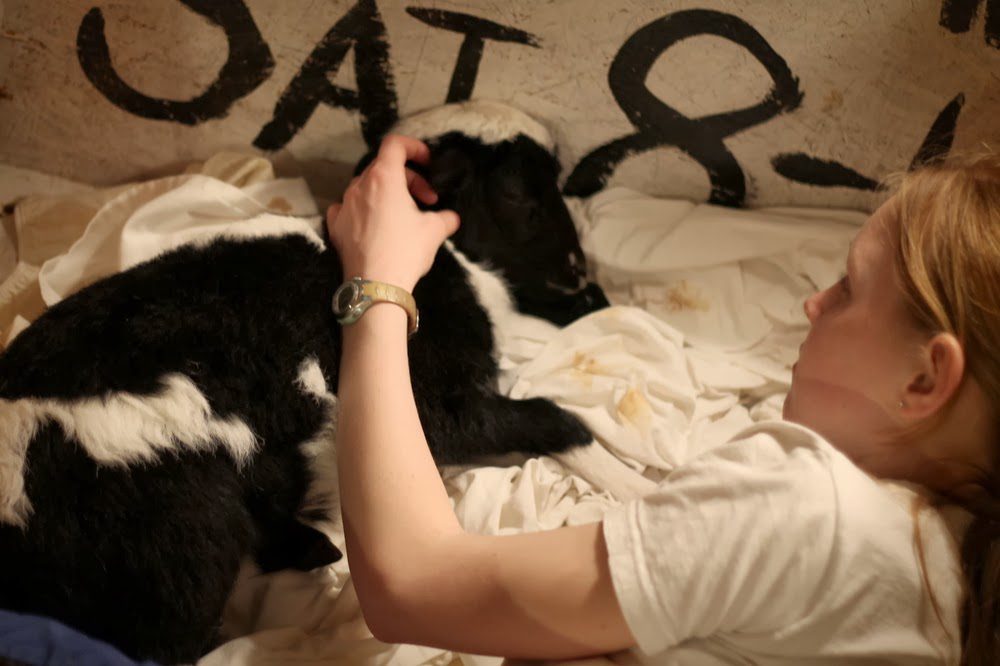 Together, in the new-and-improved box that my husband built.

The poor children. The tears and sobs. The petting and waiting and watching.

I made pancakes while willing the lamb to just please die already. I couldn’t bear the slow decline. Waiting for the inevitable. No longer hoping but still sort of hoping. And detesting the idea of having a dying animal in my house. It was all so … messy.

I put the supplies away. I scrubbed the syringes and stomach tube and bagged them up to return.

We had an appointment in town that morning. I called my husband. “Oreo’s hardly breathing. She’s going to die any minute. Can you come home and check on her while we’re out? I don’t want the children to come back to a dead lamb in the house.” And then I packed the kids into the car. We listened to books on tape on the drive, and after the appointment we got ice cream. It was a nice break.

On the way home, we passed my husband. He didn’t smile and he didn’t stop.

When we walked in the house, Oreo and the box were gone and there was a patch of freshly dug dirt in the garden.

The sadness came crashing back, unyielding in its finality. What a shattering disappointment.

The last couple hours have been rough. But there is relief, too. Finality can be a gift.

And in between crying jags, our daughter is already dreaming about and hoping for the next phone call….