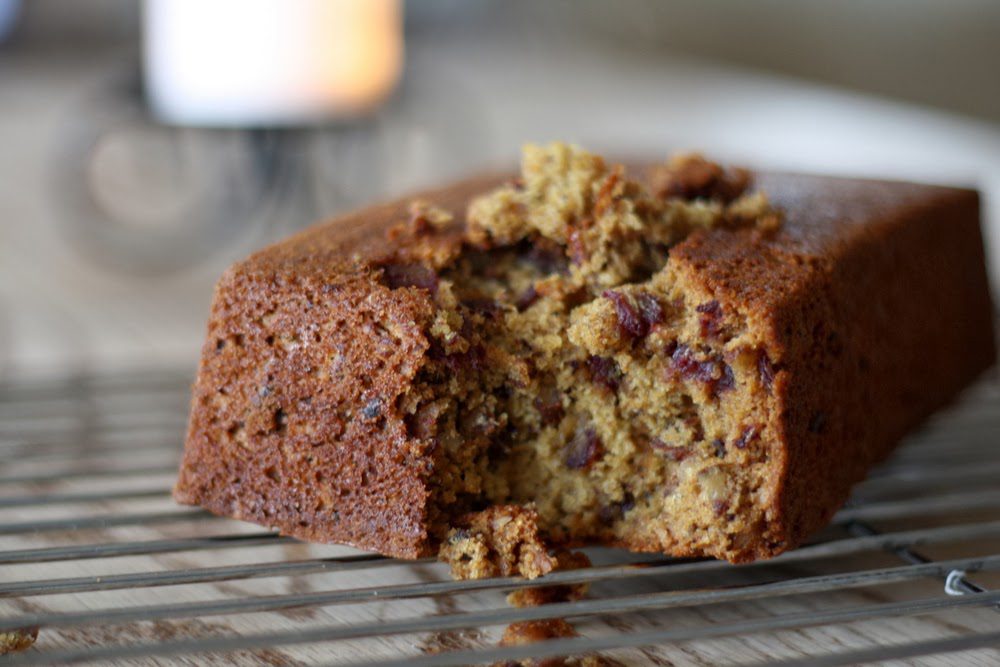 When we were up in Pennsylvania, I ate a little slice of something that my cousin made. I didn’t know what I was eating at first. Just a piece of dark fruity bread, I thought. But it was deliciously sticky tender and sweet.

“I want the recipe,” I hollered at her across the crowded kitchen. And then I yelled it again. I wanted to make sure she heard me.

She did, and the next day the recipe showed up in my inbox. It looked frightfully boring. No spices, no fancy technique, nothing. However, I decided that if I took a fancy to some particular dish in the midst of the holiday glut, then it would behoove me to make it regardless of how dull it appeared on paper.

When I turned the loaf out, a bit of the bread stuck to the bottom of the pan. I tasted it (the bread, not the pan) and then, all sense of propriety forgotten, ripped off a whole hunk and scarfed it down right then and there. I repeated the ripping and scarfing procedure several times in quick succession before pulling myself together.

Nearly every morning since, I cut a thick slice to go with my coffee. I think about the bread all day (this is not an exaggeration), looking forward to the next calorie diminutive period of my life when I might indulge in another slice, perhaps with a cup of tea this time.

I haven’t offered the bread to the rest of my family for two reasons: 1) I doubt they would appreciate it, as they are deterred by nuts in bread, and 2) I don’t want to share. 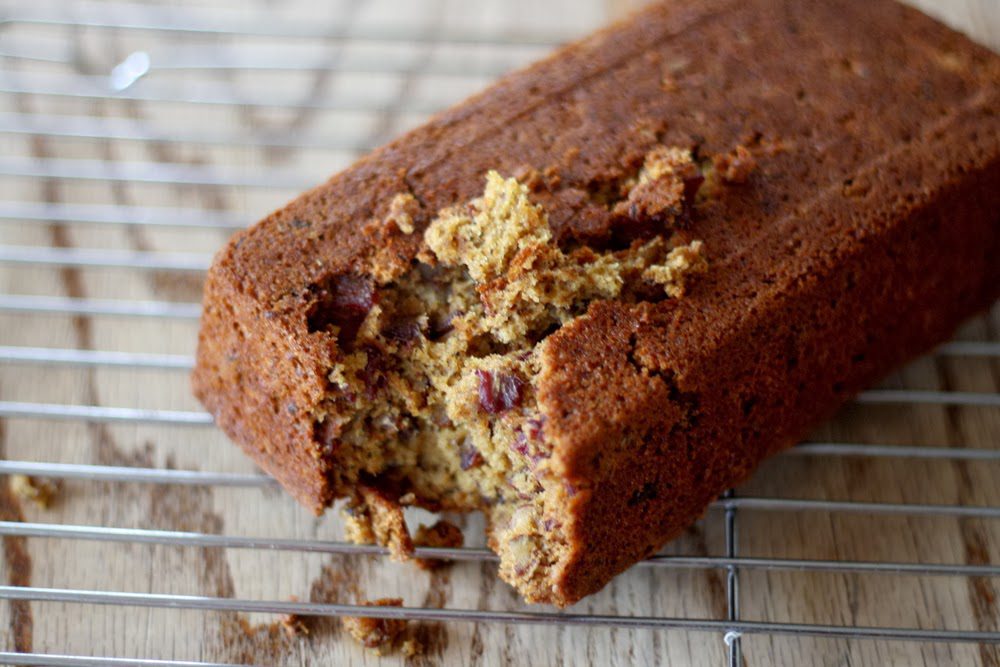 For the toasted pecans: I tossed them about in a hot skillet until they were fragrant (about 6-8 minutes) before chopping them to bits.

Also, I used a mix of a gluten-free flour blend and white flour because I was out of whole wheat.

Put the chopped dates and baking soda in a small bowl. Pour the boiling water over top. Let sit while assembling the remaining ingredients.

In a large bowl, stir (or cut) the butter into the sugar. (I used a fork for this step.) Whisk in the egg and vanilla. Add the flours and salt. Stir in the dates and water. Add the nuts.

Pour the batter into a greased loaf pan. Bake at 350 degrees for about an hour. Start checking it at 40 minutes. (Zoe said it should take about 1 hour and 15 minutes, but my bread was done in a little under an hour.) Let cool for 10 minutes before running a knife around the edge of the pan and turning the bread out onto a cooling rack. Serve warm or at room temperature. I eat it plain, but it’s also delicious with butter, cream cheese, or Nutella.