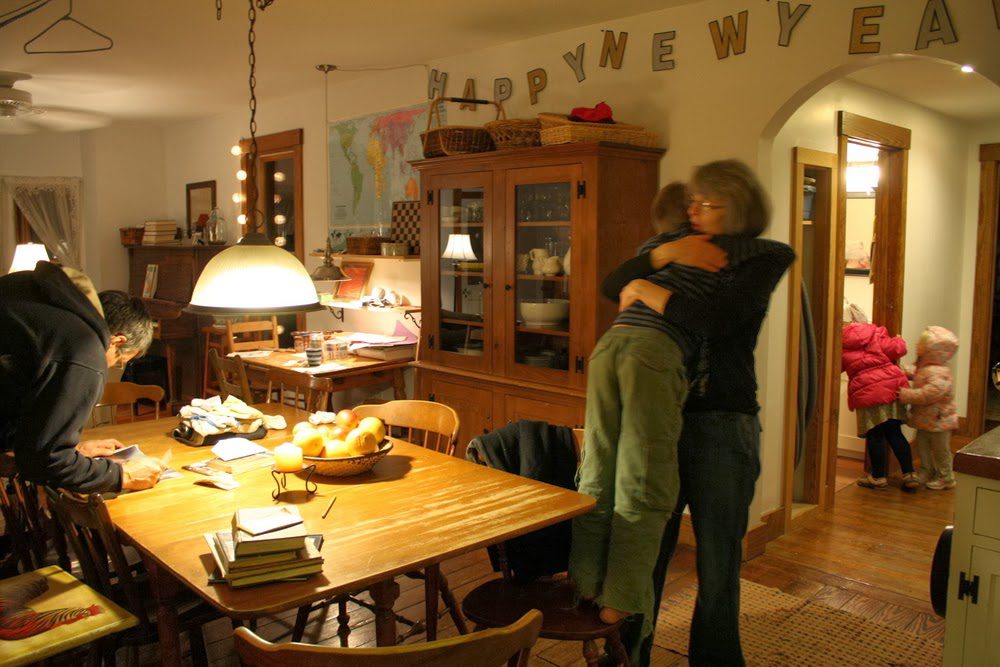 I snapped this picture on Saturday evening.

I got out the camera (that only works sporadically/there’s a new one in the mail/I don’t want to talk about it) to capture the lovey love-love going on between my baby and my mommy. But then when I loaded it to my computer and sat down to look at it, I realized there was a lot more going on.

1. The obvious: my youngest child snuggling on his grandmommy. A minute before, he had launched himself off the chair and into her arms, wrapping his legs around her middle like a human koala bear.

2. My husband reading a magazine. He’s not supposed to be reading. I know this because he’s back in the corner, bent over the table, and not sitting in a chair like a civilized reader of words. He was probably mid-straightening up, saw the old Time Magazine that my mother brought us, leaned a little closer, and end of cleaning up the house. (This is what is sounds like when he starts a fire with old newspaper: crumble crumble crumb— SILENCE.)

3.The little pile of clean, folded, and not put away laundry on the table. This—the tail end, the one final piece, the unfinished task—drives me absolutely bonkers. It is also the reason that, when making lists for the minions, I write, “Fold laundry and put it ALL away.” This time, there was no list and I suffered for it.

4. The one solitary clothes hanger dangling from the living room ceiling (and the blue ropes in the very corner). Usually, that hanger has a man-sized pair of damp overalls draped over its plastic shoulders. In the winter time, the area around the wood stove transforms into a clothes drying room. It’s so romantic.

5. That string of paper lantern lights that I splurged on (fifteen dollars, to be exact) and haven’t regretted once.

6. The two little nieces spying on one of my showering daughters. They are in their coats (the nieces, not the showering daughters), ready to go to a coffee shop with my parents to listen to their parents (the girls’ parents, not my parents’ parents) perform. The older daughter, whose head is in the bathroom so you can’t really see, is wearing an old-fashioned bonnet a la Laura and Mary. She is very devoted to the world of make believe and confessed that she sometimes even sleeps in her bonnet.

7. The stack of books ready to be packed up and taken to West Virginia with my older son for his week-long visit with the grandparents. On the reading agenda (if they get to it): the atom bomb, the orphan trains, Uncle Tom’s Cabin (the only must read because it’s due back to the library), some grammary stuff, The Crucible, and I can’t remember what all else (something on the Titanic, maybe?)

8. The basket of grapefruit. My kids are leery of the sour fruit, but they’re getting braver about taking tastes. Now when I peel myself a snack, I’m lucky if I get half of it.

9. The banner proclaiming that it’s January and we’re happy about it (from Mavis).

10. The cluttered art table with a mug of dirty water leftover from a painting project.

11. The briefly-shelved chess board. It’s in high use, that board is. I’m forever finding chess pieces (we have an odd assortment from several games) under sofas and kitchen cabinets, crunching them with my feet, or vacuuming them up. Nearly every game (between the two youngest) ends in tears, rage-tossed pieces, and flailing fists. And yet they keep starting new games, weird kids.

12. And back to my loving-on-his-grandmommy boy, the shredded pants. The hems got so full of holes that he kept tripping and falling. When the holes finally ripped open so that the pants were fringed with swaths of dangling fabric, he was thrilled—no more sudden floor landings.