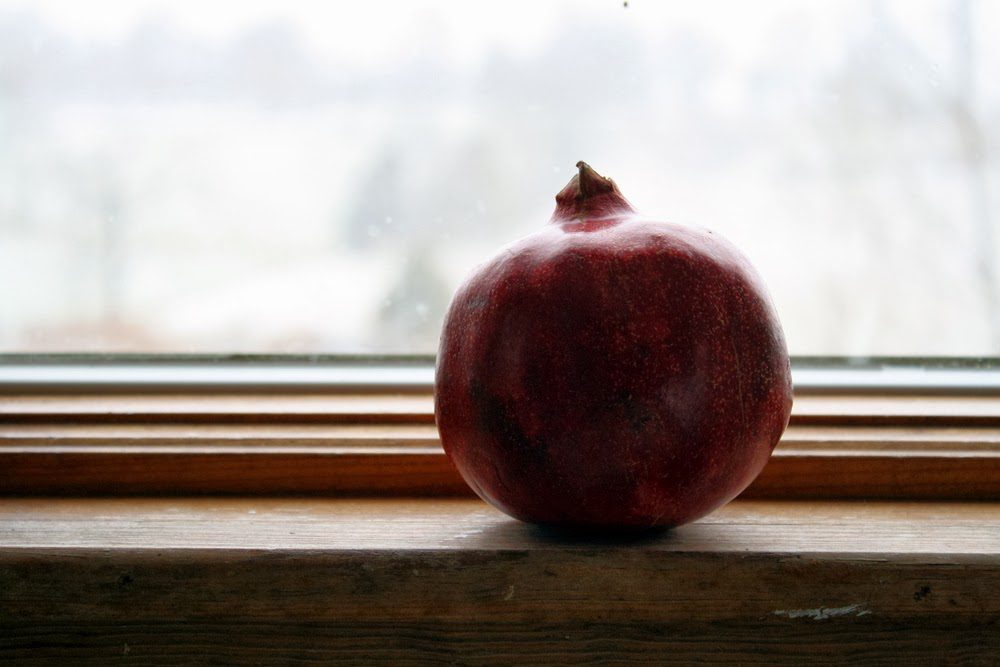 I was thinking I should only eat oatmeal and grapefruit today, considering that tomorrow is Thanksgiving and that even though my mother is making a cake and a slew of pies, she still asked me to contribute a cheesecake so we are going to be drowning in desserts not to mention the turkey, and then the next day we’re having a sushi-making lesson courtesy of my (Japanese) sister-in-law’s (Japanese) brother. But then when I woke up this morning, I realized that I had good toastable bread and there was three-quarters of a wheel of Brie leftover from supper last night, and then my kids asked me to cut into one of the two pomegranates I bought yesterday, and well, forget about any pre-Thanksgiving austerity measures. Let’s eat! 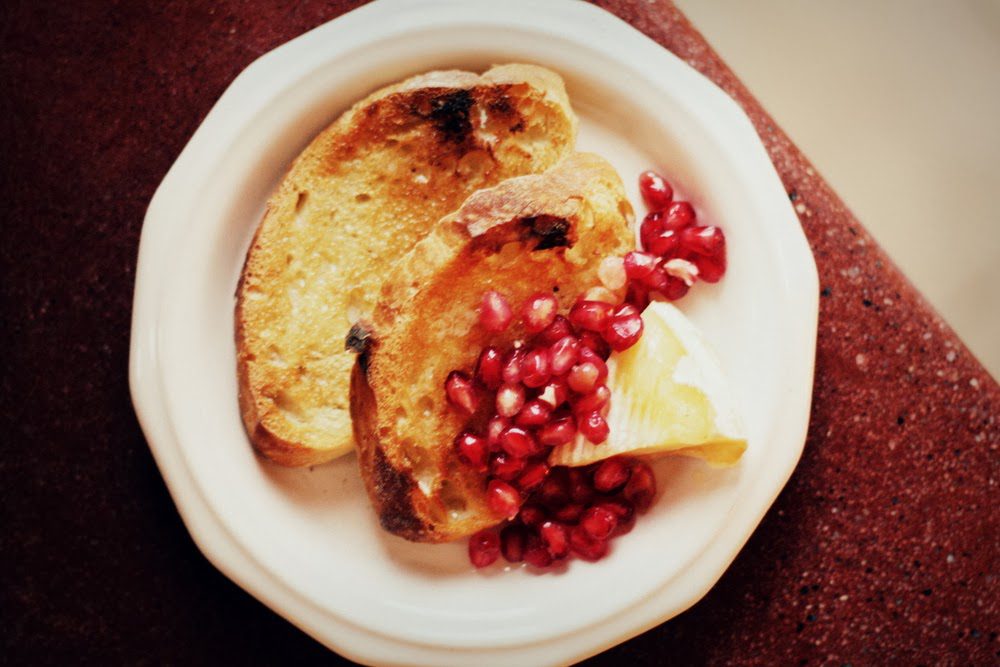 I toasted (and buttered, because forget restraint already) the bread, warmed a wedge of cheese in a hot skillet, and whacked a pomegranate till it coughed up its seeds. The kids were fascinated. Scratch that. I was fascinated. (And hurt. Because I missed the pomegranate a couple times.)

I don’t know much about pomegranates, but they’re all over the I-nets these days. There’s this video on pom-spanking, and Aimee did a whole post on the festive fruit. They’re juicy and tart-sweet—an excellent pop of flavor for anything and everything, declare the masses, and the masses are right. 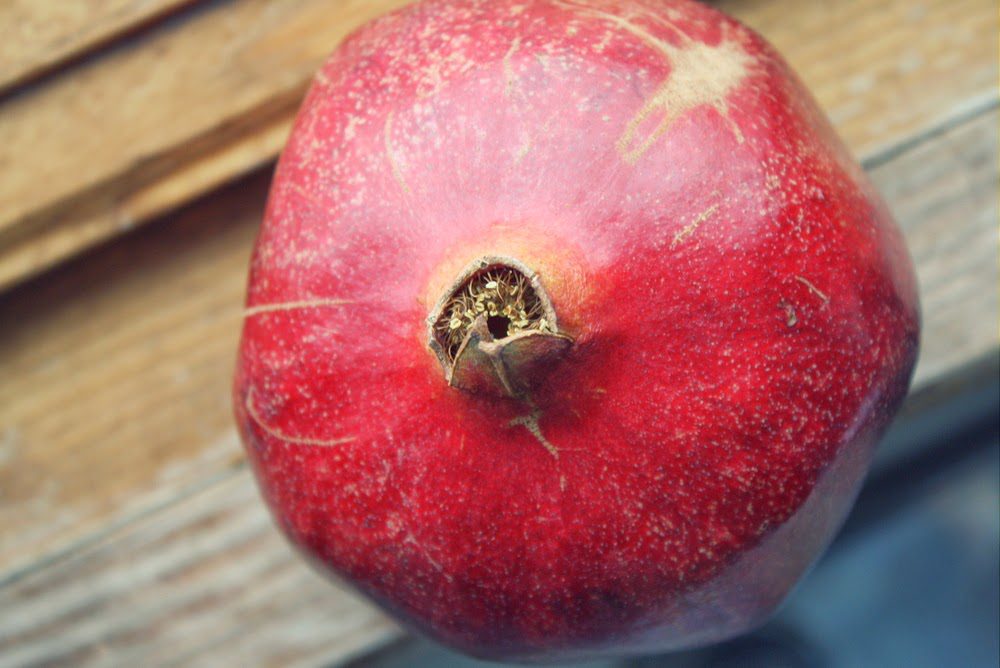 Guys, I’m sold. I got my poms for 1.19 each. That’s more than a cup of pretty berry-seeds for a buck-twenty, and when you compare that to the cost of a half pint of blueberries or raspberries, it’s a fine deal indeed.

My children (just the two youngers were around for the fruit slamming/snacking) chew-suck on the seeds and then spit the insides out. Which is flat-out wrong, but I can’t convince them otherwise. We ate a bunch for breakfast and then at lunch I put a scoop of seeds on my kale salad and thoroughly enjoyed the pop of sweet color. 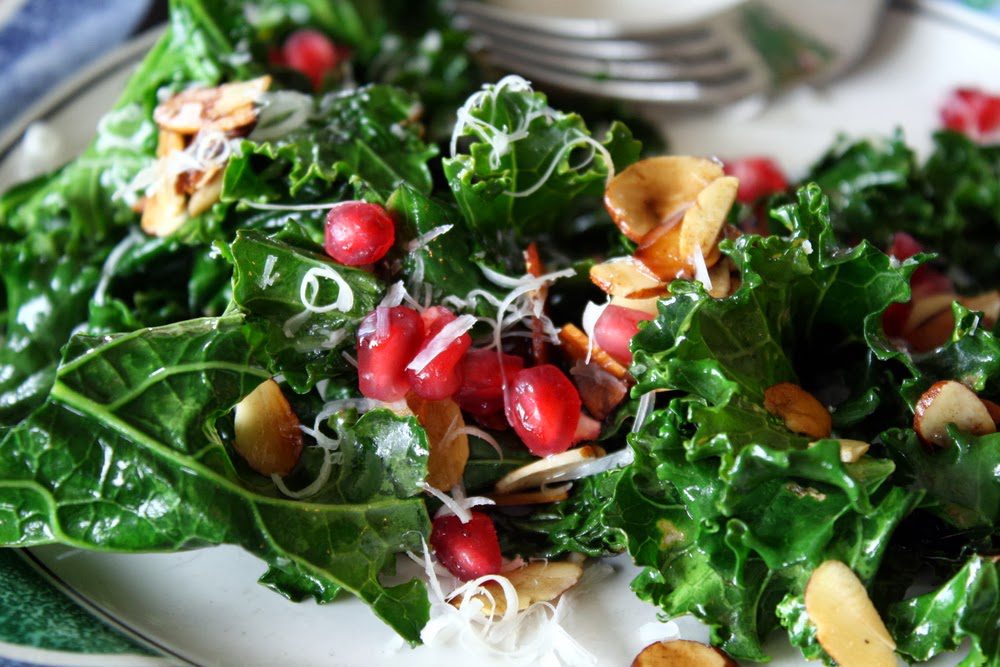 My pomegranate journey has just begun. It’s gonna be a tasty one.

There are so many variations on this theme that it’s enough to make my eyes cross. Listen. All you need to do is lightly saute some chopped kale in butter—it’s done when it’s bright green and glossy with a touch of wilt. In a separate skillet saute some slivered almonds in butter. Sprinkle salt in both pans. Put the kale on a plate. Sprinkle the nuts on top. Grate a bit of fresh Parmesan on the hot kale, and spoon some pomegranate seeds over all. Eat. (But first take a photo because it’s so dang sexy.)

I wasn’t going to write up a recipe (because that’s what I just did, right?) but then I realized that some people are rather fond of their ingredient lists, so…

There. Now go do it. Happy Thanksgiving!