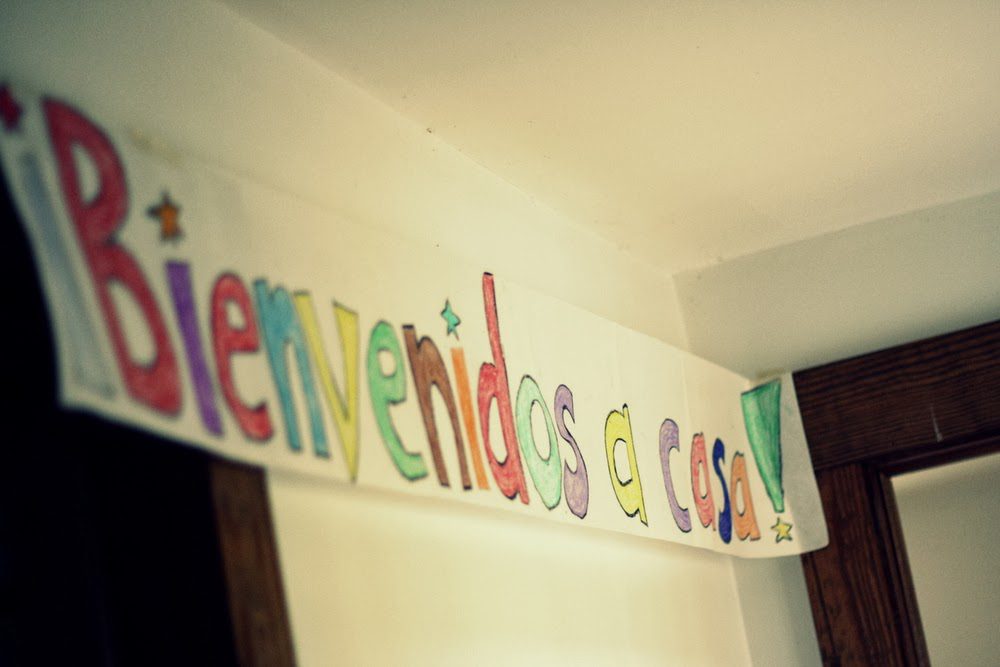 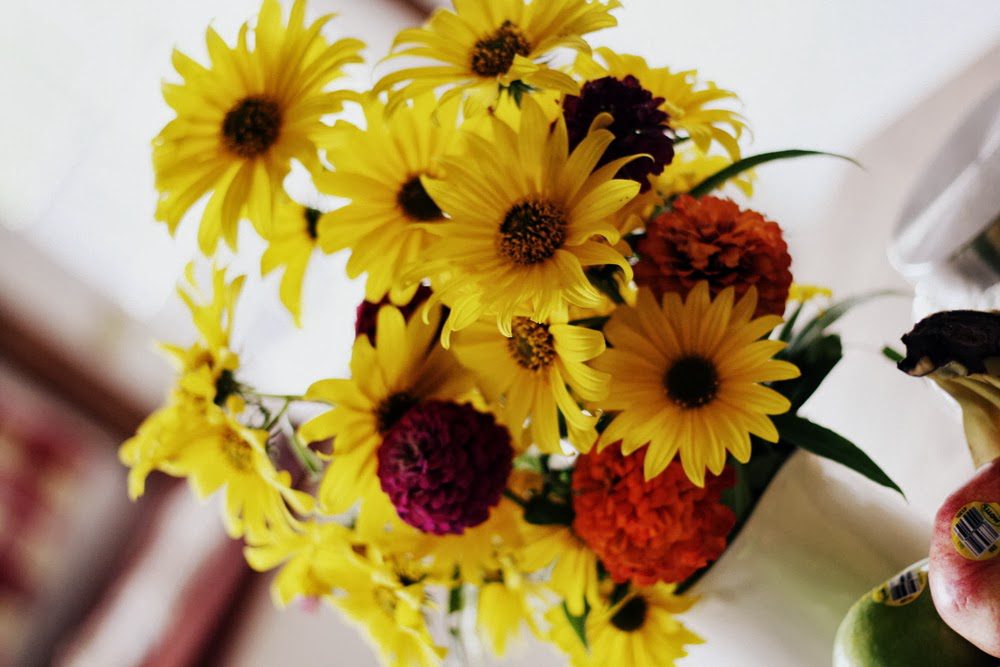 When we returned to the States after living in Nicaragua for three years, my mom was uncertain as to whether or not I would want to sleep in a soft bed. When she told me this, I was appalled. “Why ever would I not want to sleep in a bed?”

“Um, because you’re used to hard floors and cold showers and hauling your own water and dirt floors. An actual bed would just be, I don’t know, not something you’d enjoy anymore, maybe.”

I don’t remember my actual response, but I’m pretty sure that it involved a giant eye roll and a You’re nuts, Mom.

I love being cozy and comfortable. I love my morning coffee. I love my bed. I love soft lighting and good food. It is for these reasons that I do not do camping or travel. (Except for the random leave-the-country and live-in-a-converted-storage-shed thing.)

This time around, my mother didn’t ask me if I wanted a pallet on the floor. Instead, she fixed up the beds, ground the coffee, and made three birthday apple pies, yessssssss.

We left Guatemala on a 1 pm flight on Tuesday afternoon. Everything went smoothly except for when my older daughter tested positive for explosives. This was the child who was already quite nervous about immigration. She kept asking:

What if we do something wrong?
What if there is something in our bags that we don’t know about?
What if we get in trouble?

And then she went and set off the alarm. Because they couldn’t test a minor, they tested my husband with some hand-swipe-strip thing.

“Probably all those firecrackers the kids were playing with,” he said to the official.

(I didn’t even know it had happened until it was over. Because I was in the middle of getting scolded for sending my laptop through the scanner with the camera bag on top, oops.) 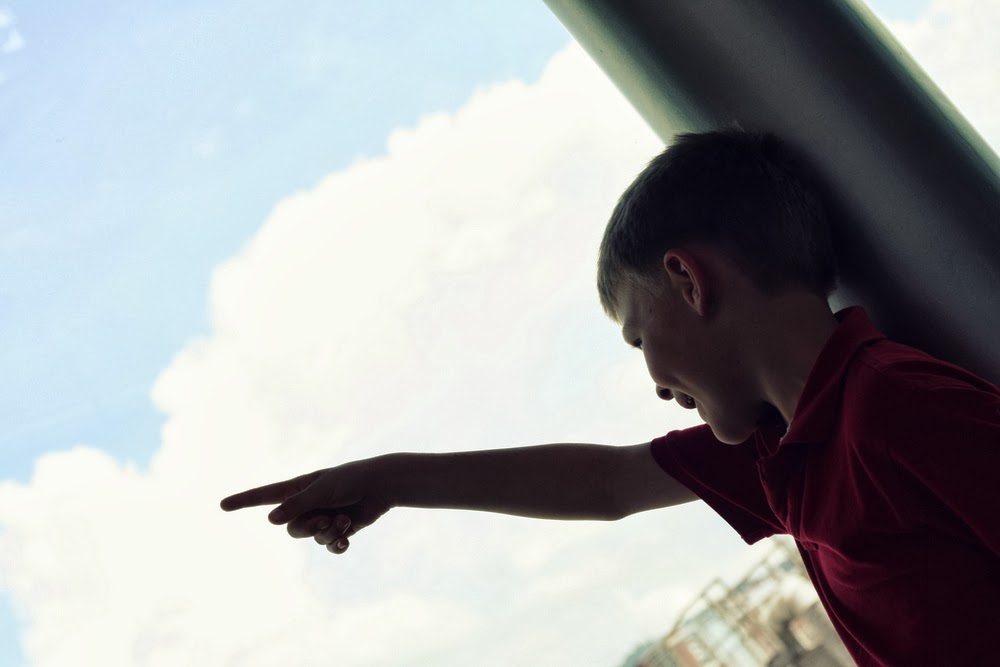 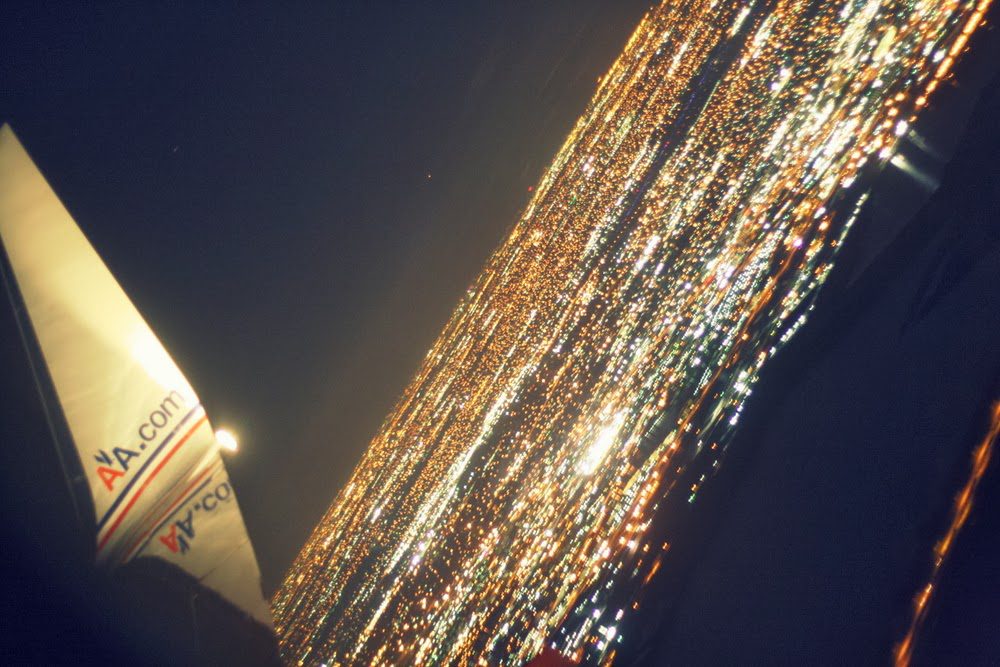 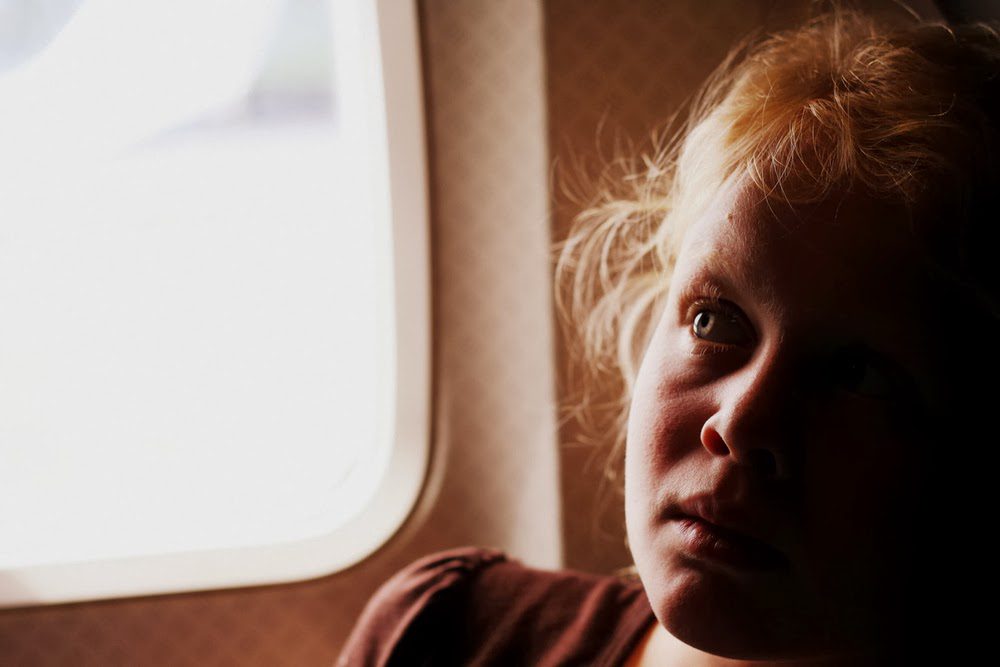 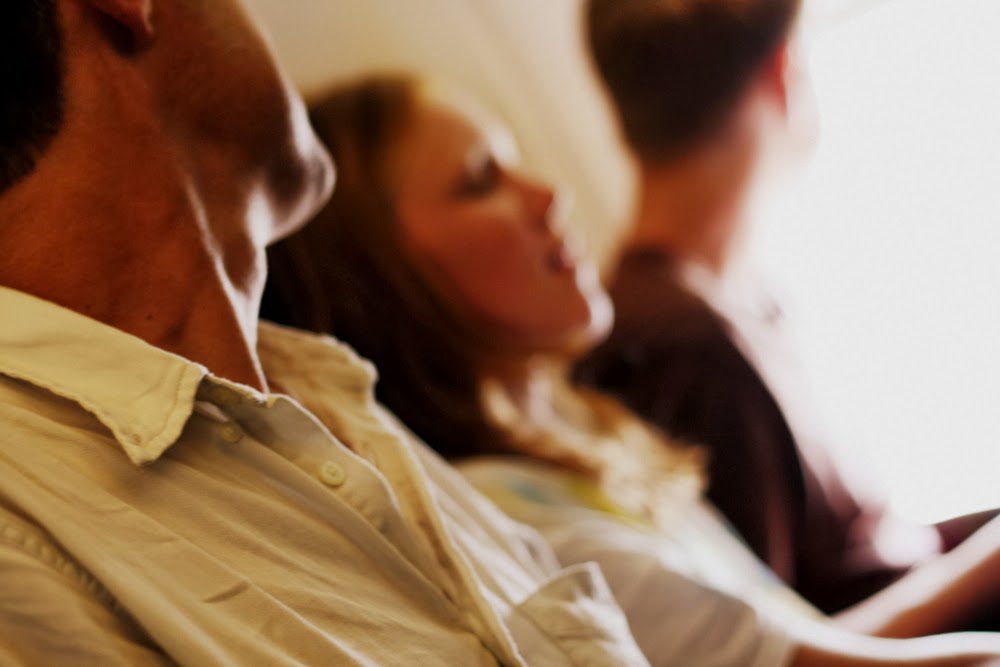 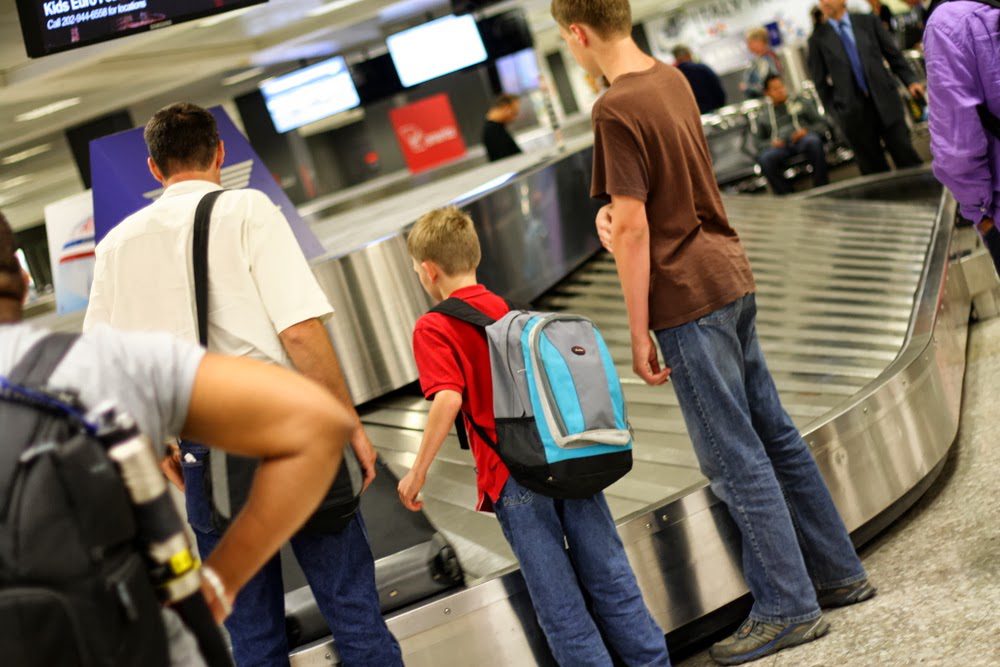 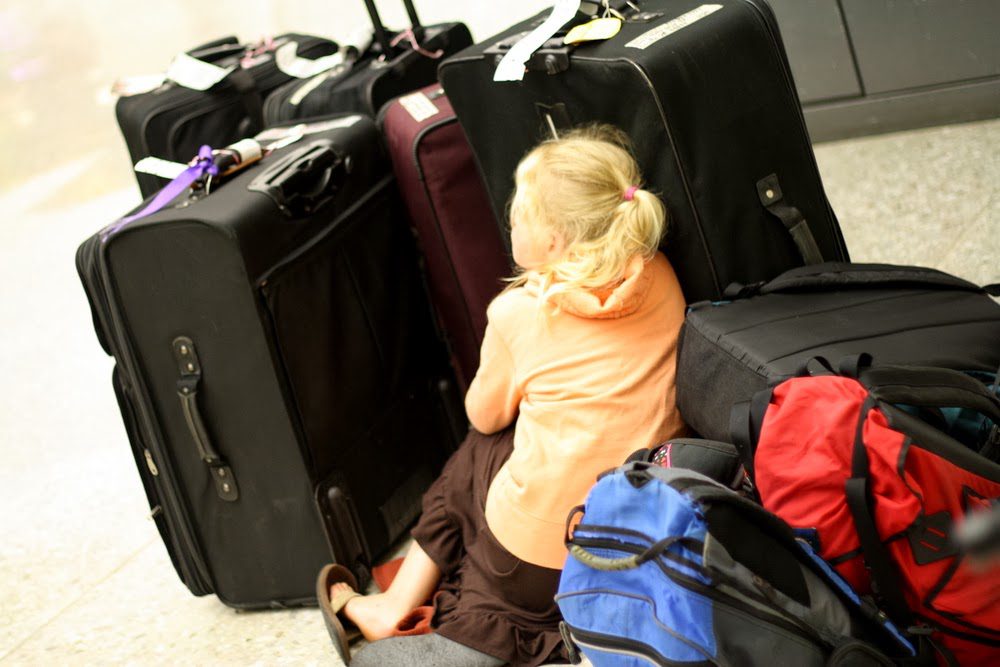 We arrived in DC at 11 pm, found our friend’s parked van in the lot, stopped by a gas station for non-stale hard pretzels, and drove straight home. Or it would’ve been straight home if my husband hadn’t decided to take a detour and drive into Washington to check on the monument. Because 66 East looks an awful lot like 66 West when you have Stupified Travel Brain.

We got home at 3 am. The kids tore around the house looking in all the corners, drinking directly out of the faucet, discovering the candy bars left on their pillows by our renters, and digging into the plateful of fresh chocolate chip cookies that my sister-in-law had waiting on the table.

My older daughter had missed her puppy something fierce. She was beside
herself with excitement to see Charlotte again. About ten minutes after
arriving home, I discovered my daughter sitting in the hallway with her dog on
her lap, tears of happiness streaming down her cheeks.

In my preliminary house run-through, I peeked in my spice cupboard and then promptly shut the door and walked away. After nine months of boasting a spice collection that didn’t even reach the double digits, I couldn’t handle the abundance. Same with the fridge, freezer, pantry shelves, liquor selection, and boxes of pantry staples donated to us by the generous folks in our church. I paced back and forth between pantry and kitchen, shaking my head and saying, “Wow,” and, “I don’t know what to do with this.”

Guys, I have three whisks. THREE. In Guatemala, I splurged on one and when we left, we boxed up that one, very special (but kind of falling-apart whisk) for one of our teammates who lives on the West Coast of Guatemala and specifically requested it. Because whisks are a luxury.

But get this: not only do I have whisks, but I have handheld beaters, a food processor, a blender, and a Kitchen Aid. My options for food mixology are slightly staggering. And that’s just the tip of the iceberg.

Wednesday morning, we finally wound down enough to go to sleep around four o’clock, but I was back up at eight. Mom and Dad came over. I didn’t know where the coffee was. I figured Mom forgot to stock it, but when I told her, she looked at me like I was insane and said, “No, honey. There’s freshly ground coffee in the drawer.”

“The drawer? What drawer?”

“The coffee drawer. You know, where you keep your coffee-making supplies?”

So I made coffee and fixed it up with some real cream and it was marvelous.

Last fall when we decided to go to Guatemala, people acted like we were sacrificing something. Like, Oh, you guys are so brave!

All the praise (but not actual praise praise because that’s not what Mennonites do to each other, at least not flagrantly) made me nervous and uncomfortable and slightly irritated. Because sure, we’d be living a simpler life, but this was what we wanted to do. It was an adventure. It was an opportunity. It was a dream come true.

If anything, it was the exact opposite of a sacrifice. To be esteemed for snagging something I wanted so dang bad felt screwball weird.

But now that I’m home and I see how comfortable our house is, and I feel the love of all the many people who care about us, and I have five containers of peanut butter on my shelf in comparison to the little one-cup jar of pb that I hoarded for weeks on end, I am bowled over by how much we did give up.

“Look at all we have!” I marveled to my husband, over and over in the first 24 hours we were home. “Why in the world did we ever want to leave! What was wrong with us!”

But then a few hours later, in a snatched moment of calm, I had the distinct feeling that, No, we weren’t crazy for picking up and moving to Guatemala. If an opportunity to do this sort of thing arose again, I might be willing to say yes. Or at least I would certainly consider it.

And then I realized: childbirth! Ask a woman right after giving birth if she wants more children and she’ll bite your head off because ABSOLUTELY NOT. But then, eventually, she signs up for the whole ordeal all over again. To a nonparent, the nausea, pain, sleepless nights, and questionable reward (a snot-nosed poopypants) is rather incomprehensible. But to the initiated, the baby and the personal transformation are so worth it.

In retrospect, yes, we gave something up. A lot, actually. More than we realized at the time. It’s funny how it’s not till the homecoming that I realized the extent of our decision to leave.

And about the whole sacrifice thing: if we didn’t feel like we were sacrificing anything, was it a sacrifice? Don’t we have to be fully aware of how much we’re suffering in order for it to count as a sacrifice? I think yes, we do. What we made was a choice, not a sacrifice. There wasn’t much nobleness involved. (But if we now feel like we did indeed sacrifice something because hello soft bed, are there some bonus points that we can redeem retroactively?) (KIDDING.)

The children are still throwing their toilet paper in the trash can.

Remember how I wrote about the lack of buffer in Guatemala? How life there was so raw? I guess I kind of got used to it. I got used to getting rained on in my house and the coarse white sugar with bits of dirt in it and the trash on the ground and the taxis tied together with twine.

And then I come back to my world in Virginia and it is the exact opposite of “lack of buffer.” Here when it rains, you don’t feel like the skies are attacking you. Instead of machine-gun-fire-on-tin-roof, the falling rain is faint and whispery. It has an inside-the-womb feel to it.

The toilet seats are sturdy, the fridge is mammoth, the house is cozy. And the people, oh the people! Even though we haven’t actually seen hardly anyone yet (and I’m a little—scratch that—a whole lot anxious about going to church because I don’t know if my raw nerves can stand so much glorious familiarity and belongingness), we feel completely surrounded by kindred spirits and people who know and love us so deeply. 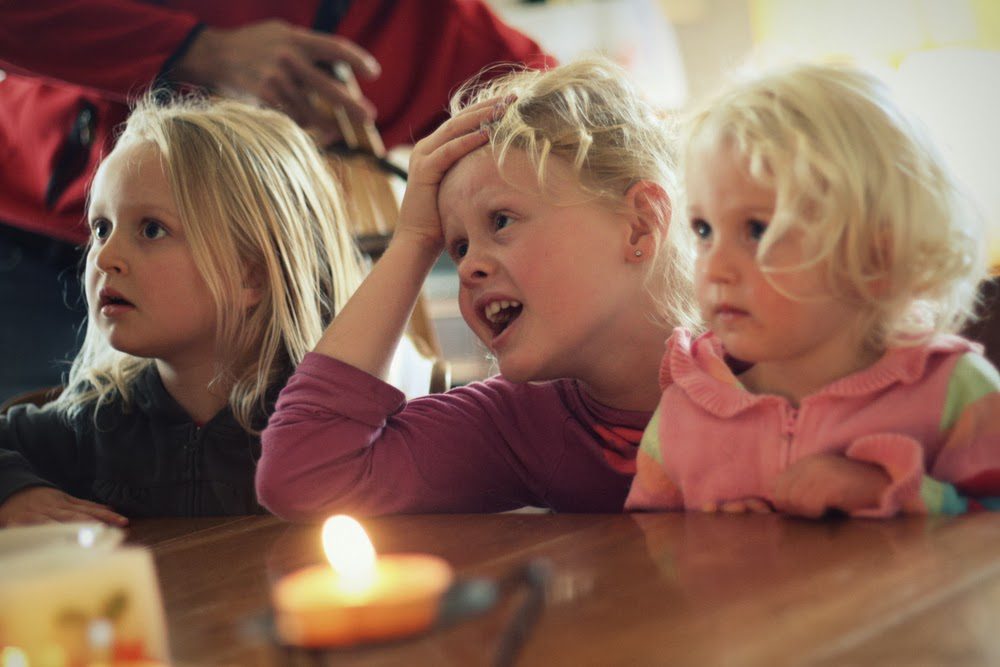 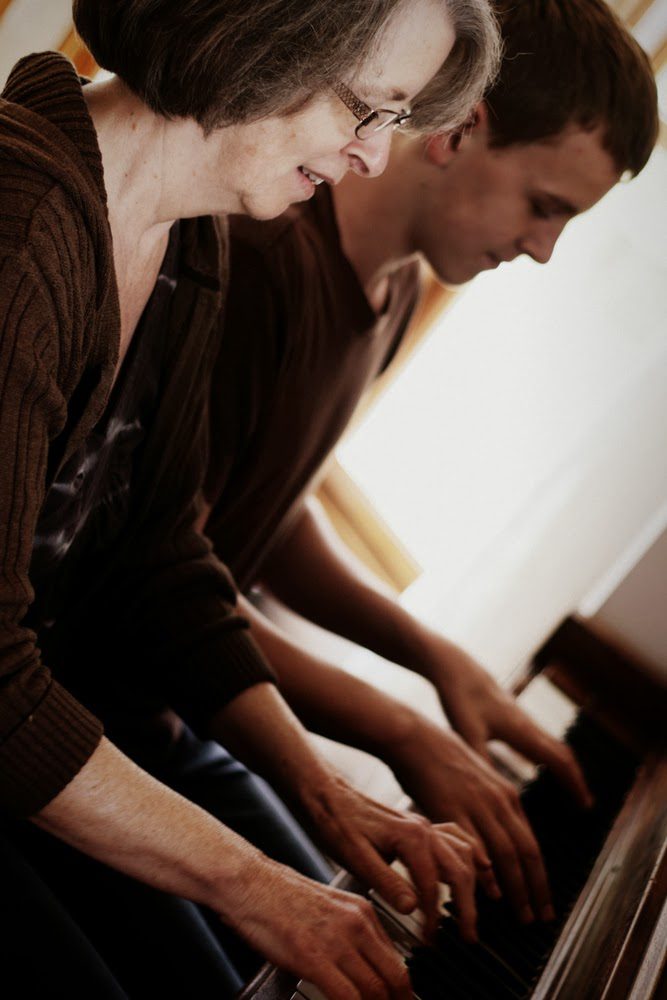 Walking into our house in the dead of night, we were greeted with colorful signs, balloons, bowls of fruit, baskets of vegetables, boxes of non perishables, garden tomatoes on the window sill, a stocked fridge, birthday cards, candy on the kids’ pillows, gift cards, and on and on and on. No one but us was there, but the air was thick with human warmth. So much caring, so much love. My daughter wasn’t the only one with tears. 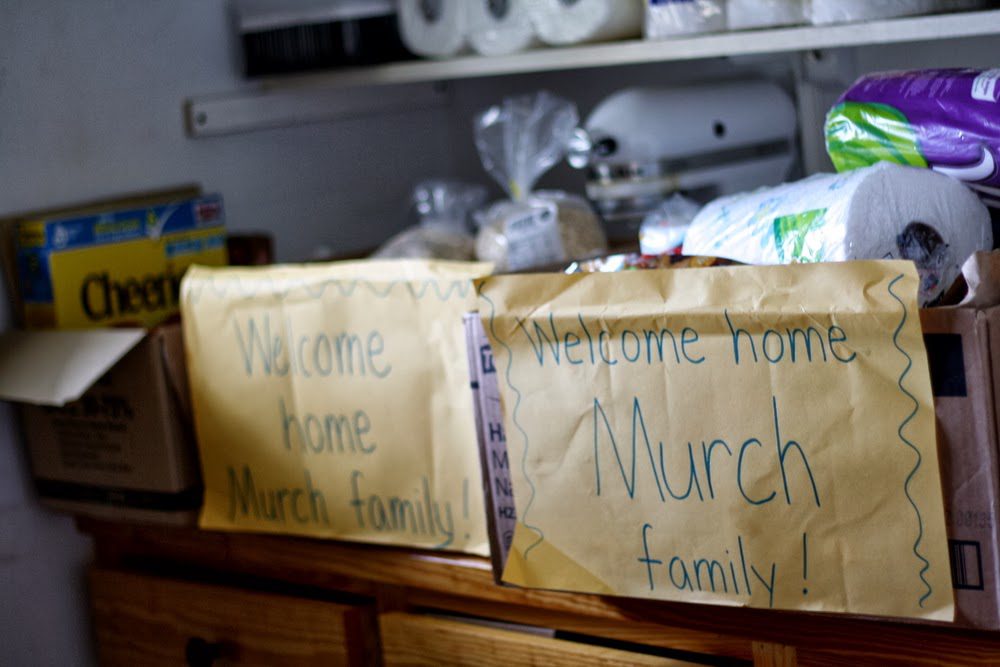 You know that suspended-in-clouds feeling that you get when surfacing from a long afternoon nap, completely relaxed and all wonky disoriented? That’s what coming home feels like. Walking into our beloved house, hugging all the dear people who know us, driving for the first time, drinking coffee with cream—it’s all like sinking into a well-loved easy chair. Bit by bit, the stress of living with the unfamiliar is slipping off our shoulders. Our days feel like one giant, extended exhale: we’re hooooome. 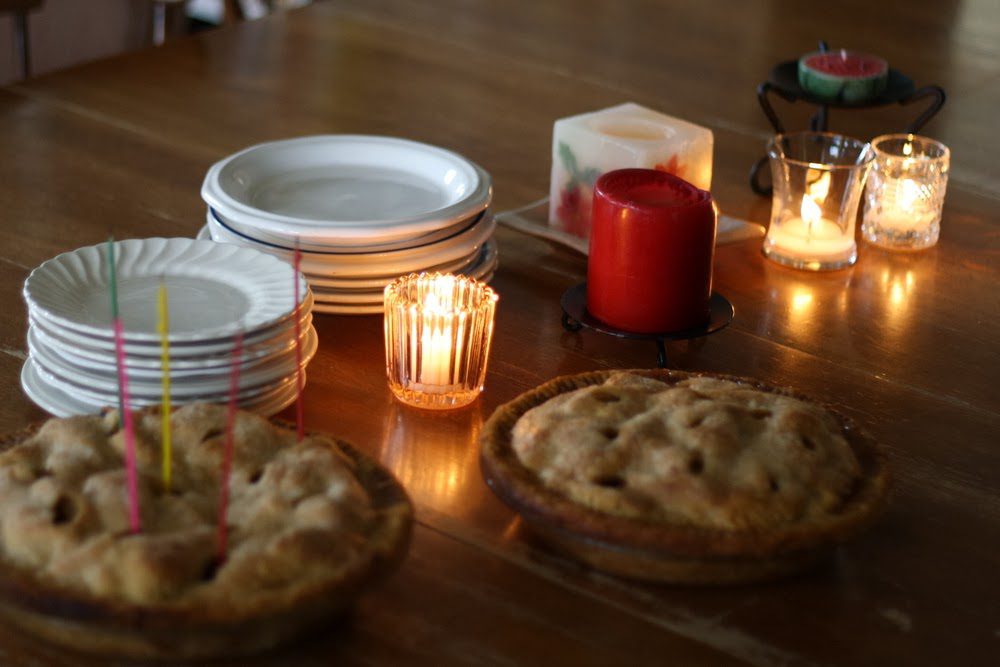 Now, the excited tickle in the pit of my stomach—that giddy feeling that makes me pop wide awake even when I’m still exhausted—is fading. It’s being replaced by a new feeling. I’m not sure what, exactly, but “Deer In Headlights” comes to mind…