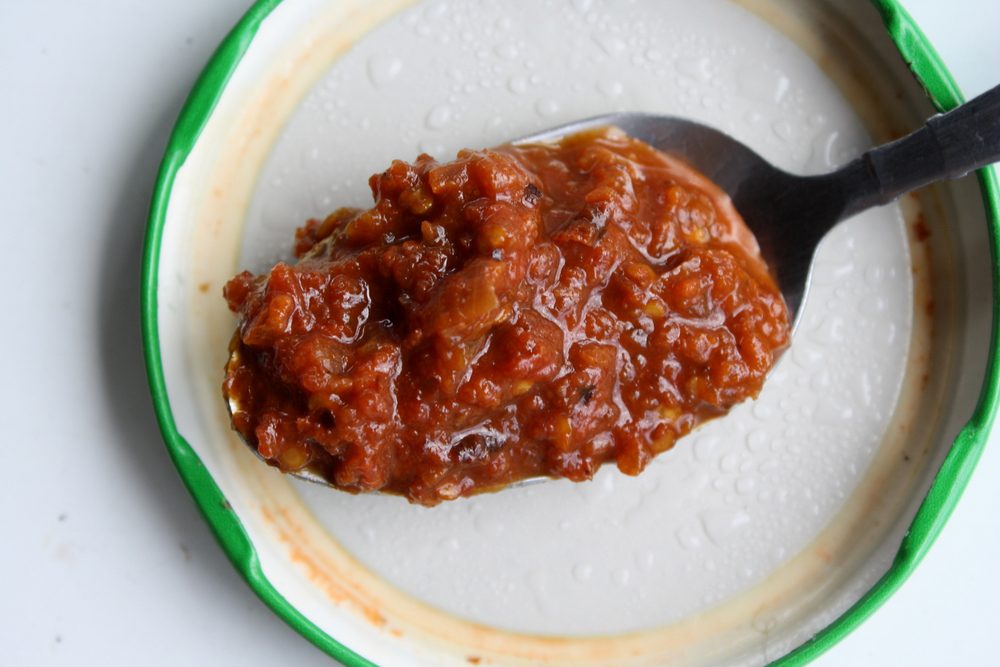 The K’ekchi’ are known for their passionate love affair with hot sauce. It’s on the table for every meal, and they call it “the angry one.” Spoon with caution.

At Bezaleel, there are two common hot sauces in particular: green and red. I love them both. The green, made from fresh chiles, adds a vibrant, nasal-clearing bite, and the red, from dried chiles, is smoky, deep, and packed with flavor. I have long wanted to learn how to make the sauces, but it wasn’t until several weeks ago that I got serious and wandered up to the kitchen to do some culinary investigating. 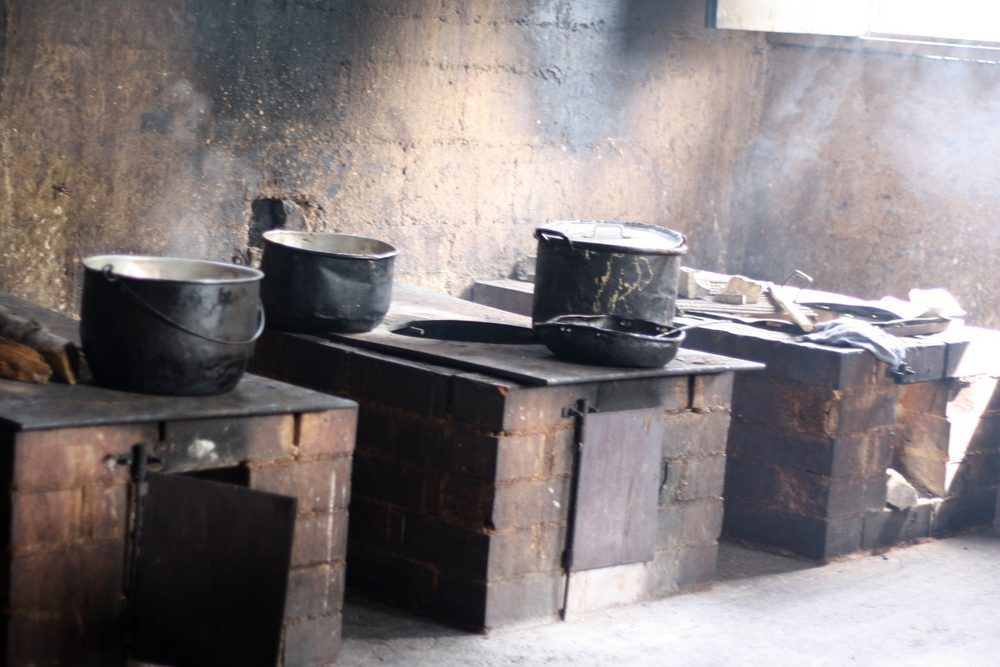 About the kitchen. Bezaleel has two cooks. Both are K’ekchi’, but only one speaks Spanish. They alternate days, arriving at school at 8 am and staying 24 hours before heading home for their off day. Each woman single-handedly preps and serves three meals on her shift, serving well over a hundred hungry teenagers at each. (The female students pat out the tortillas, but the cook is responsible for cooking the daily 100 pounds of corn of which the tortillas are made.) 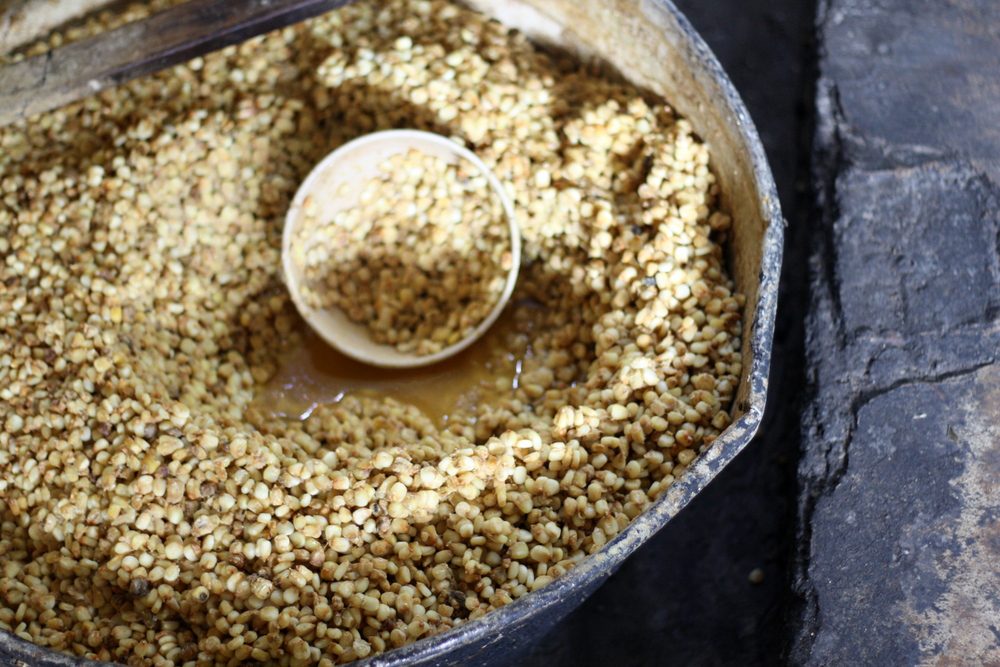 The weekly menu is limited, thanks to bare bones funds and no time. Breakfast and supper consist of beans, and the lunches, the main meal of the day, follow a basic schedule:

Monday: a single scoop of potatoes (in any form: mashed, in broth, etc.)
Tuesday: one spoonful of green beans with a few bits of scrambled egg
Wednesday: chow mein (noodles with bits of chicken, carrots, and guisquil)
Thursday: a piece of fried chicken with a scoop of soupy, spicy salsa
Friday: Tuesday’s meal, again, or maybe a brothy soup with greens

After being served the allotted portion by the cook, students walk to the next table to get their tortillas, dress up their meal from the communal bowl of hot sauce, and get a cup of some sort of grain drink. (There’s also a mid-morning snack of corn/wheat/rice drink and a mid afternoon snack of fruit.) 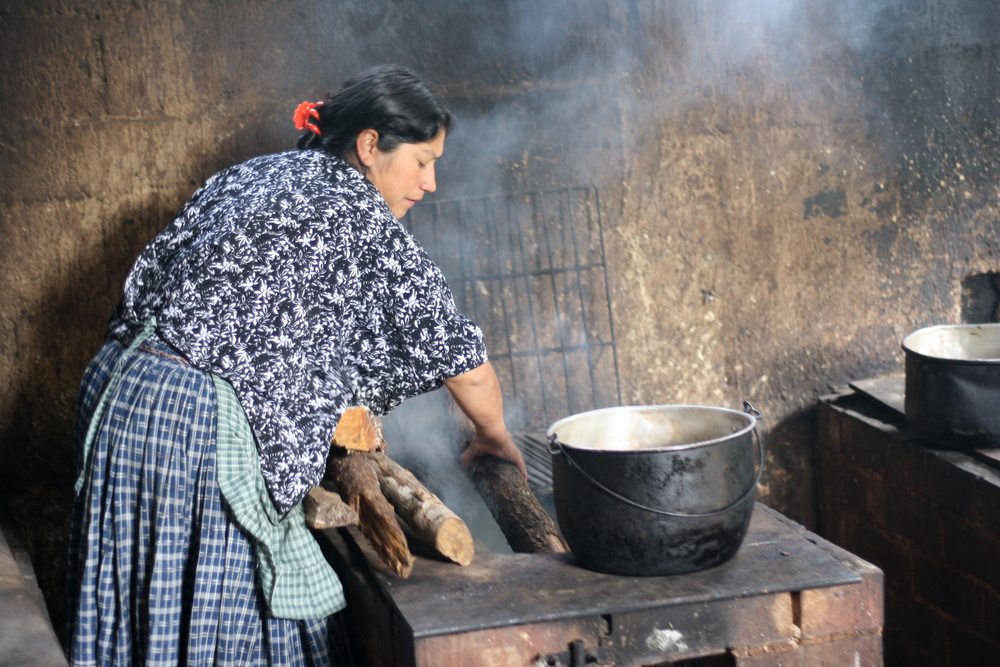 When I wandered up to the kitchen several weeks ago, Doña Ana, the Spanish-speaking cook, was on duty. While she julianned carrots for the chow mein, I quizzed her on the intricacies of chile making. And then I asked for a knife and cutting board and joined in on the julianning. Thirty minutes later, I had an inch-long blister on my finger and a new friend.

I like to visit Doña Ana when I can. Conversation with her is always easy and thoughtful. She’s merry and interested, and there’s always something for me to do. Earlier this week when I visited, we sat on low stools and peeled potatoes. 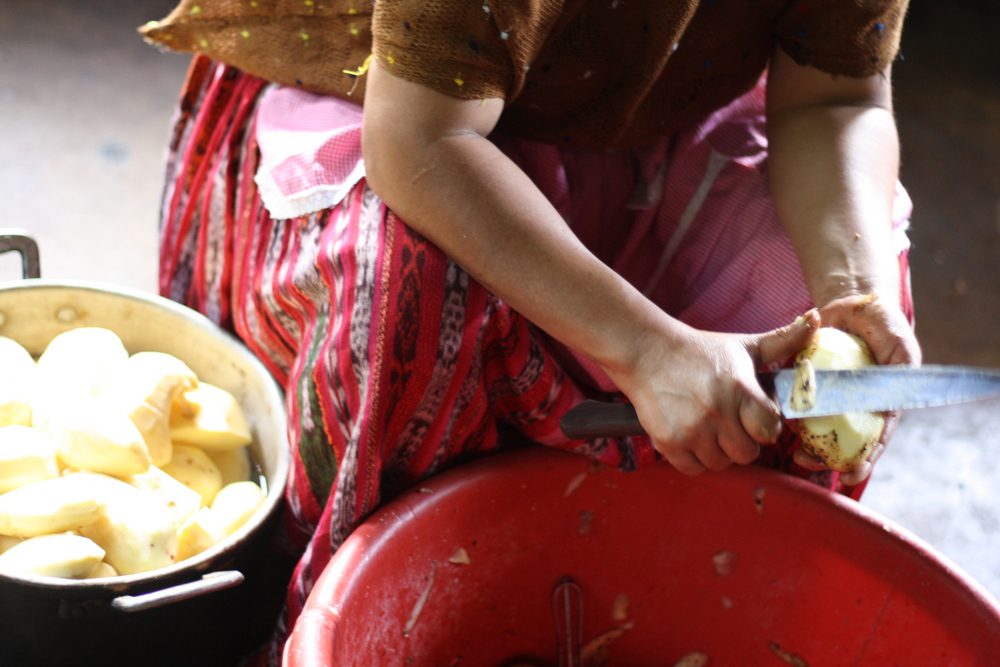 Doña Ana (she has five children and one grandchild and is only one year younger than me) absolutely, positively adores cooking. She took a cooking class at the vo-tech school in Cobán. She has worked as cook for a couple of Cuban doctors (and will be returning to them after this school year is up). One time they took her with them when they went on vacation to Belize.

“We ate garlic bread,” she said, her eyes sparkling. “When they said we’d be having garlic bread, I thought, ‘What? I wonder what that is like!’” And then she ate it and fell head over heels in love.

Also, “In Cobán there’s this place that makes a delicious Chinese rice. I tried to replicate it at home, and I almost got it right!”

And a question, “Have you ever had orange rice?” is followed with fascinating, step-by-step instructions. 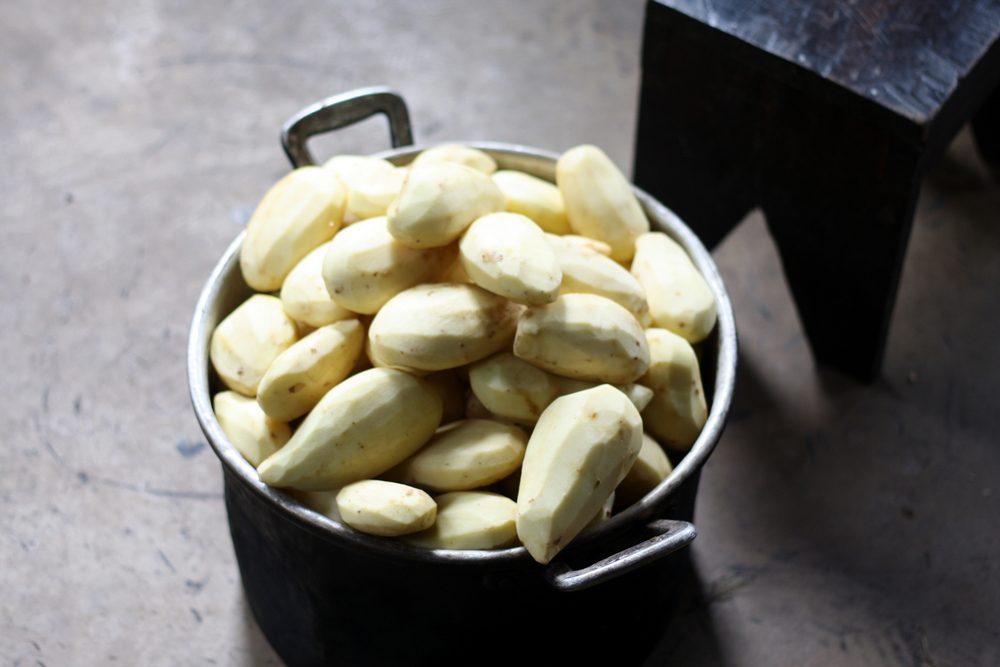 People, I do believe I have encountered my first Guatemalan foodie!

Now. For the chile sauce and this fabulous food that we have here: chile cobán. 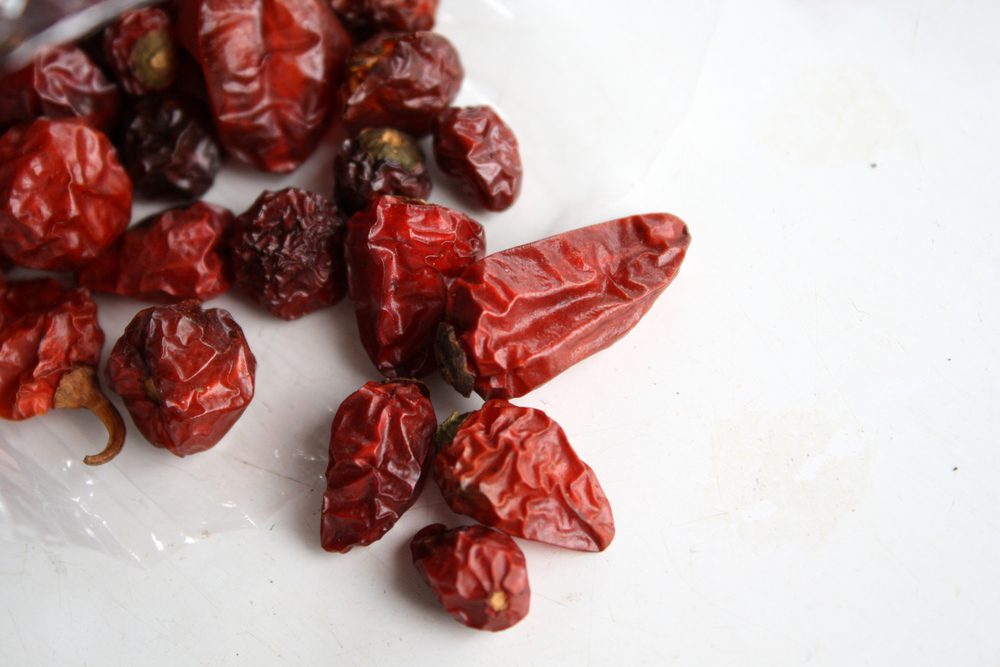 Chile Cobán’s smoky flavor is similar to the chipotle chile, but hotter. Baskets of the dark red, wrinkled beauties are everywhere in the market—an ounce costs less than fifty US cents. In my efforts to find a source for the dried chile in the states, I have searched the web backwards and forwards, but to no avail. This distresses me. I am keeping my fingers crossed that I can import a personal, lifelong supply. (The dry powder—which we use for our sweet and spicy popcorn—can be purchased here. Or here.)

The sauce is easy to make. The process goes like so:

*toast the dried chiles.
*saute an onion and some garlic in a bit of oil.
*puree chiles and aromatics in a blender with a bunch of tomatoes.
*simmer the sauce to cook through and reduce to the desired consistancy.
*add a glug of vinegar and salt to taste.
*store in the refrigerator. 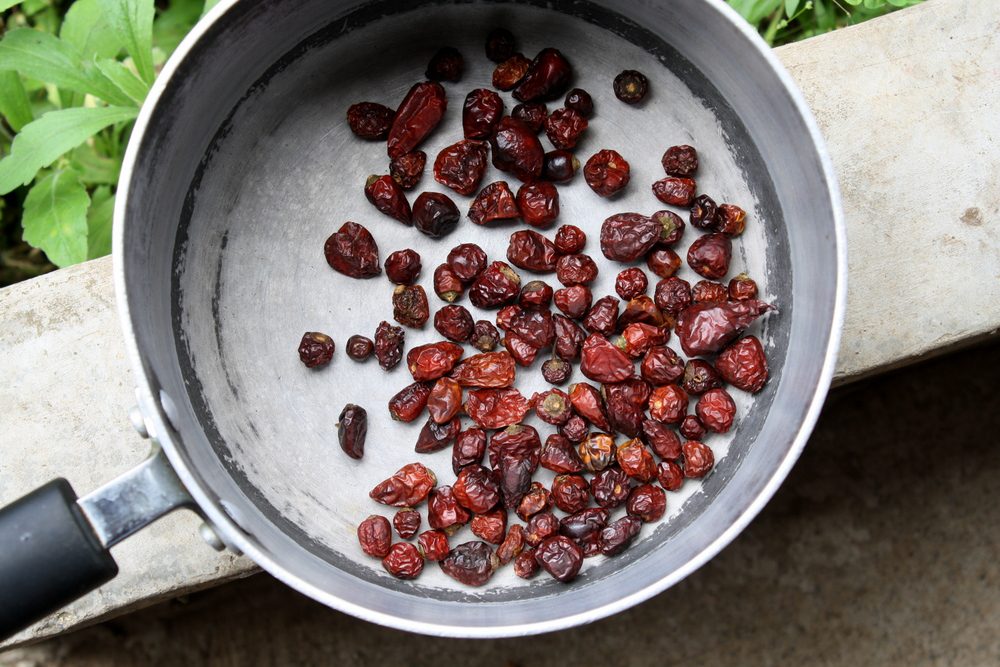 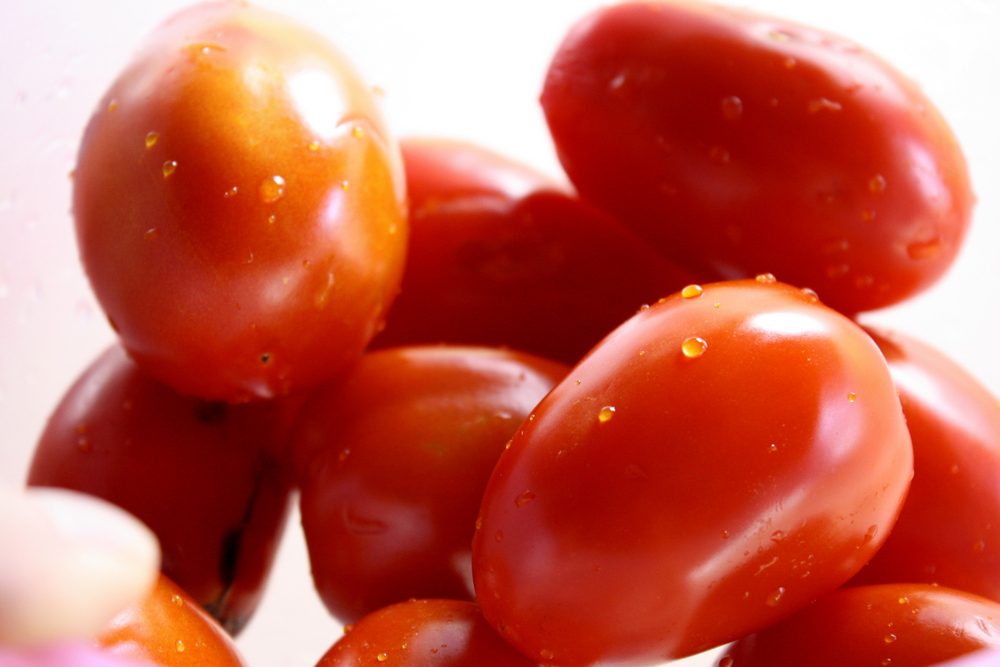 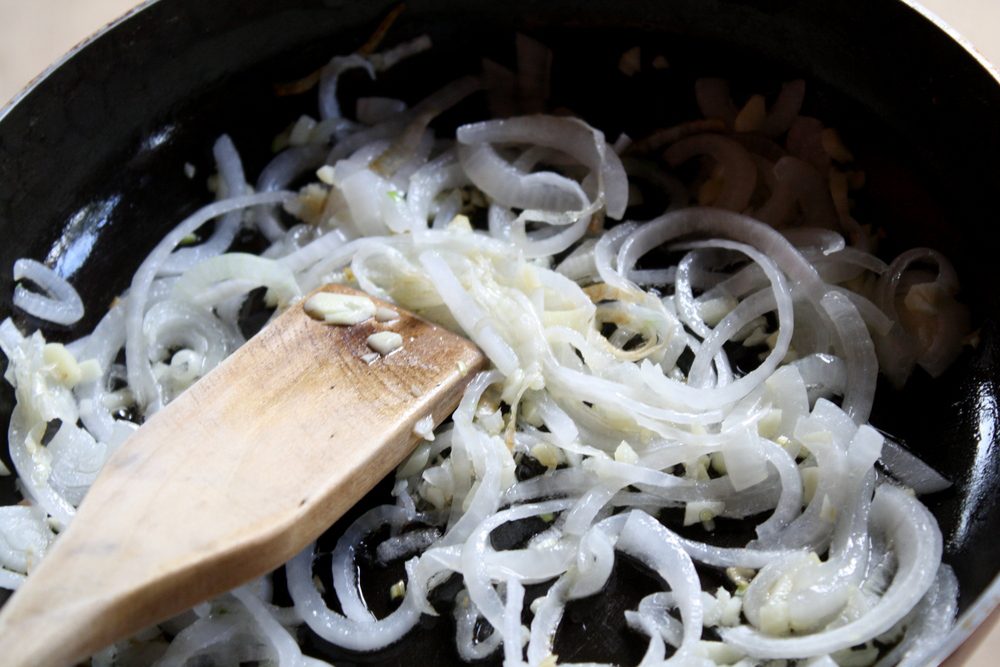 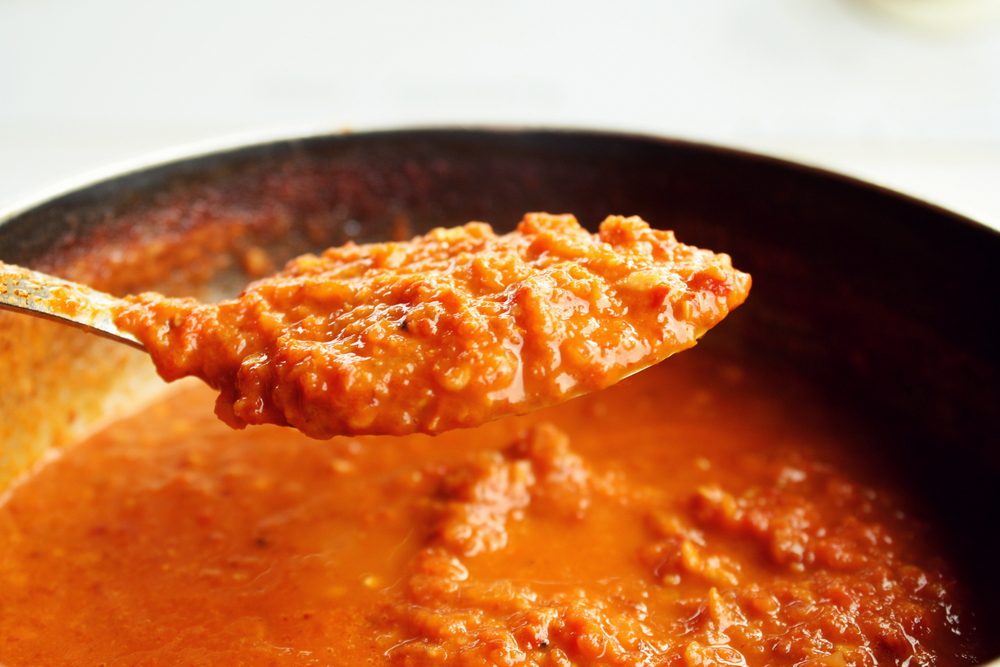 For a green chile sauce, first cook the fresh chiles in water until very soft before pureeing them in the blender along with the cooking water, salt, and the sauteed onion and garlic, no tomatoes. 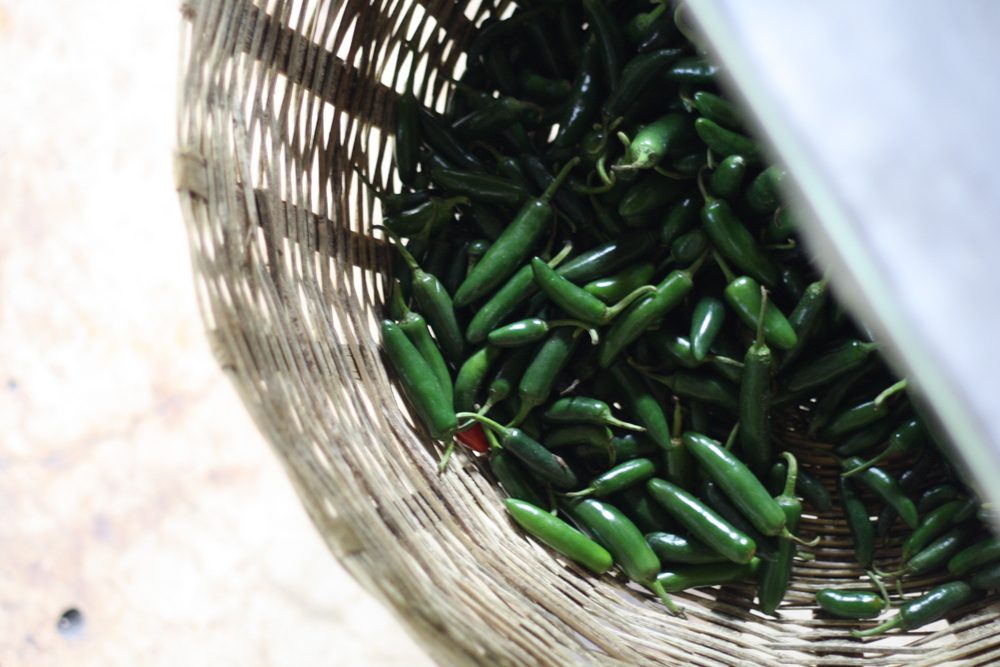 in the Bezaleel kitchen

I made this version once and scorched my nasal cavities, esophagus, and lungs when I lifted the lid of the blender after whizzing it smooth and took a sniff. The burn is hot and swift, but there’s not much flavor. (I think I used a fiercer chile than they normally use at school.)

The variations for a homemade chile sauce are endless. Aside from the plethora of dried and fresh chiles, each with their distinct flavor, you can add different amounts or varieties of tomatoes (or ground tomatoes or tomatillos) as well as vinegars, salts, and aromatics. And, of course, the level of heat is completely up to you. 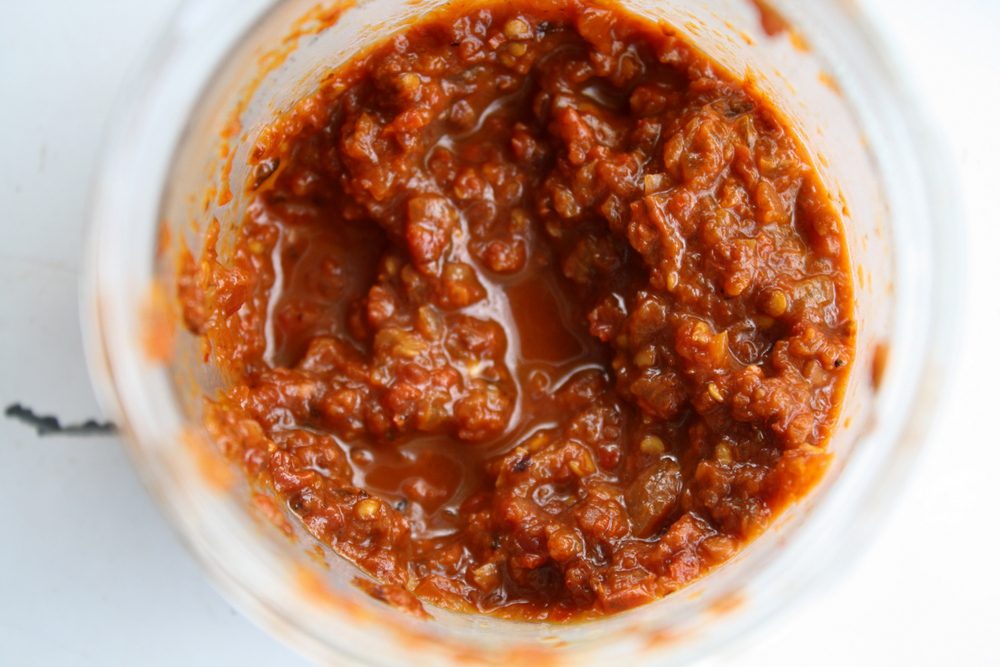 As for what to do with it, I like to add a couple scoops to a pot of cooked dried beans. (I’m slowly—and successfully!—building up my family’s tolerance for heat.) The chile disappears into the broth and the deep, smokey flavors elevate the whole dish. When the MCC team came for supper, I seasoned the sloppy joe meat with my homemade sauce instead of the dried stuff I’d imported from the states. (Well, I did add a couple teaspoons before I realized that I had a better option available to me.)

This most recent batch turned out a bit angrier than I wanted. (I used a whole ounce of chiles to one-and-a-half pounds of tomatoes.) My husband walked in the door just as I was bottling it for the fridge.

“Here,” I said. “Have a taste of this spaghetti sauce.”

So he did. And then he made a beeline for some cold, soothing milk. 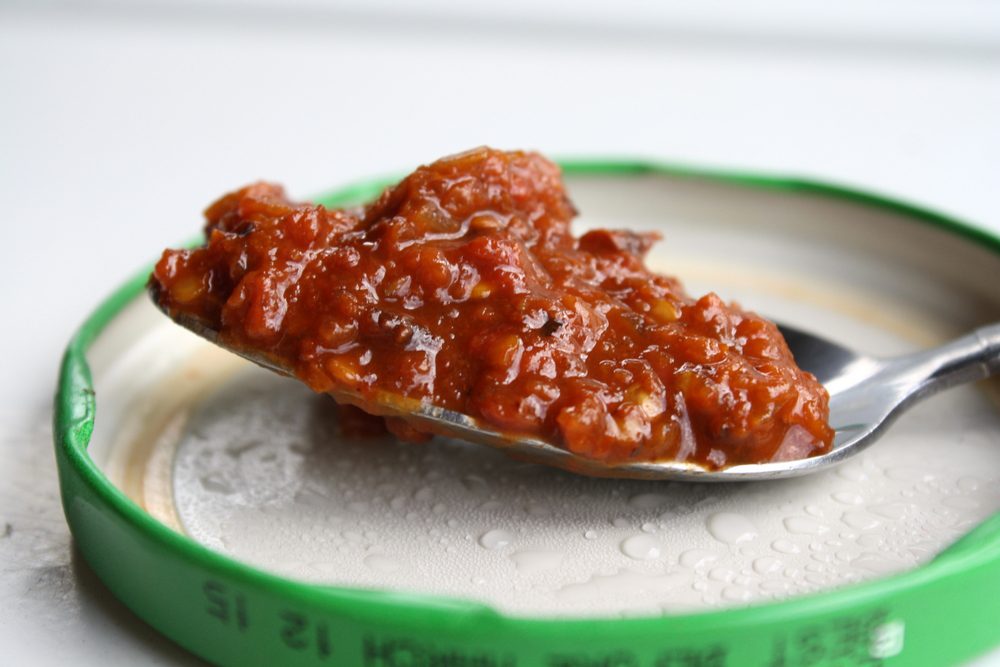 Put the chiles into a skillet or saucepan and cook over low heat for 20-30 minutes, shaking the pan every few minutes. The goal is to dry out the chiles completely, not brown them (though a little of that will happen, too).

In a separate skillet, saute the garlic and onion until translucent and soft, but not blackened.

Wash and roughly dice the tomatoes.

Put all three components—chiles, aromatics, tomatoes—into a blender or food processor. Blend until smooth. Pour the contents into the still greasy skillet (or another sauce pan, your call), add vinegar and salt, and simmer on low heat until the desired consistency, about 20-30 minutes. Taste to correct seasonings—don’t skimp on the salt!

Store in a glass jar in the fridge (once back in Virginia, I plan to freeze the extra in ice cube trays before storing in glass jars in the freezer) and add to everything.