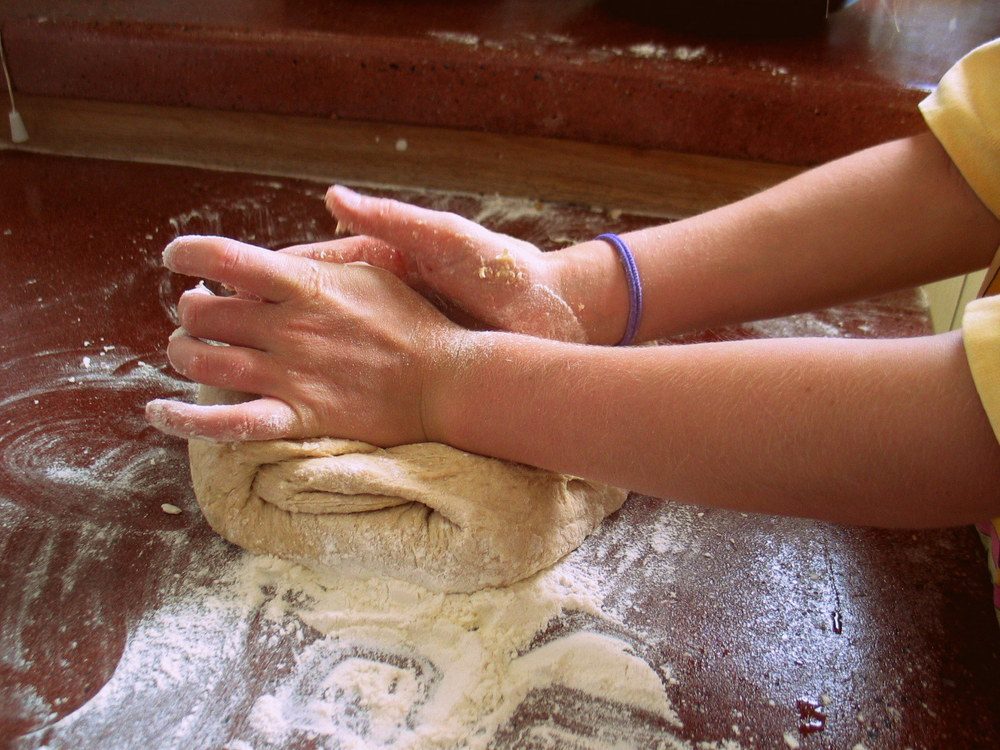 Five years of blogging and I have never posted my favorite basic bread recipe. I am chagrined. Woe, woe, and more woe.

This is the recipe I turn to when I’m teaching newbies, when I want bread fast (it takes three hours from start to finish, BAM), and when I want something to impress guests. Because there’s nothing like thick slabs of fresh bread with lots of butter and homemade jam to wow the masses.

I had each of my older two children make this bread when they stayed home from school last week. My older daughter has made this recipe on several different occasions, but my son, I was scandalized to learn, not only had never made it before, he had never kneaded bread before. Woe!

His bread didn’t turn out that great. It didn’t have enough salt (my fault—I wasn’t watching him measure), and then it was underbaked (again, my fault). (But, you’ll be proud to know, I exercised restraint and didn’t jump on it.) 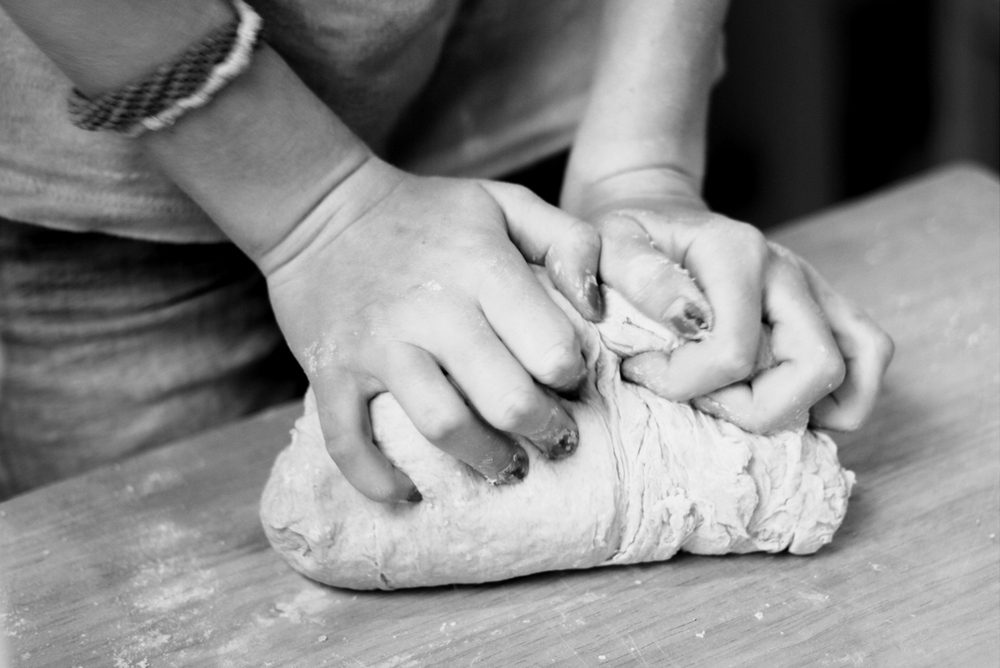 My daughter’s bread turned out fine. She made half the dough into butterhorns and was quite pleased with herself. 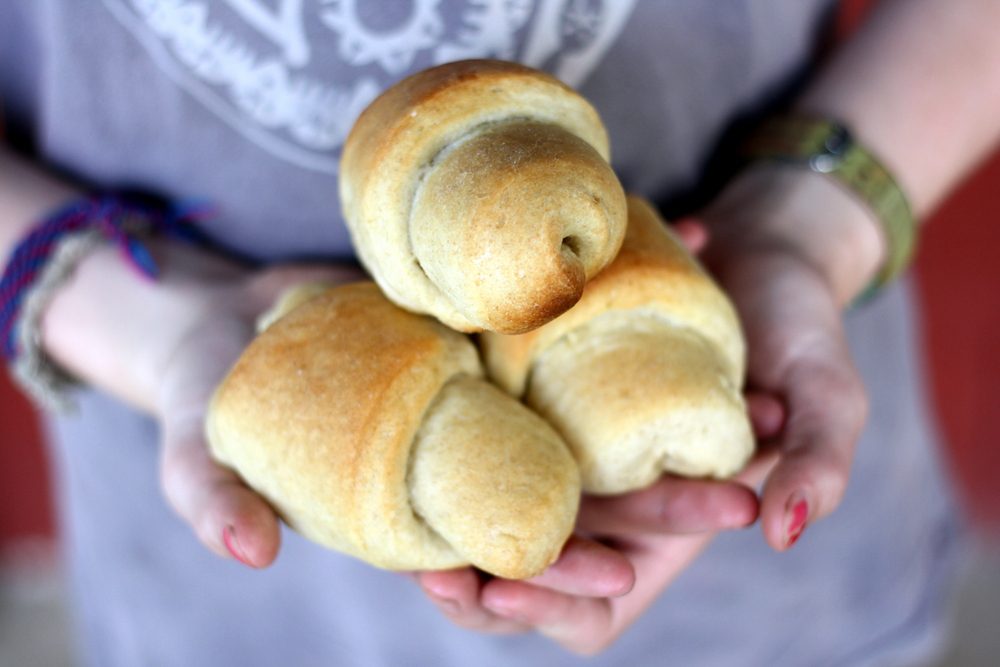 This semester, we are tackling yeast breads in my baking class. This is, of course, the first recipe I taught them. 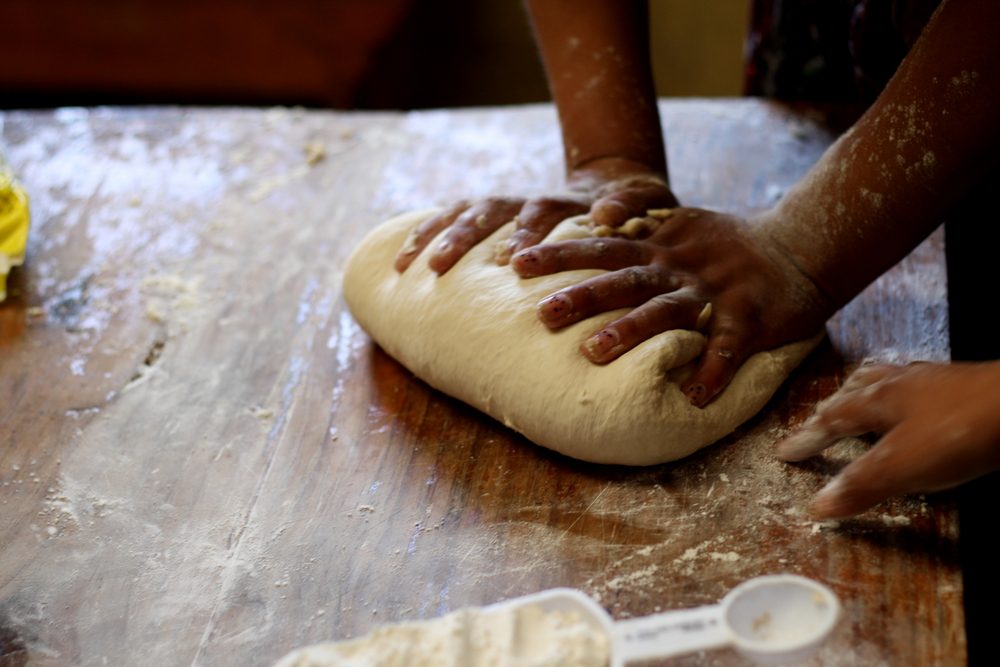 Up until now, they’ve had no idea what yeast was nor had they ever kneaded dough. 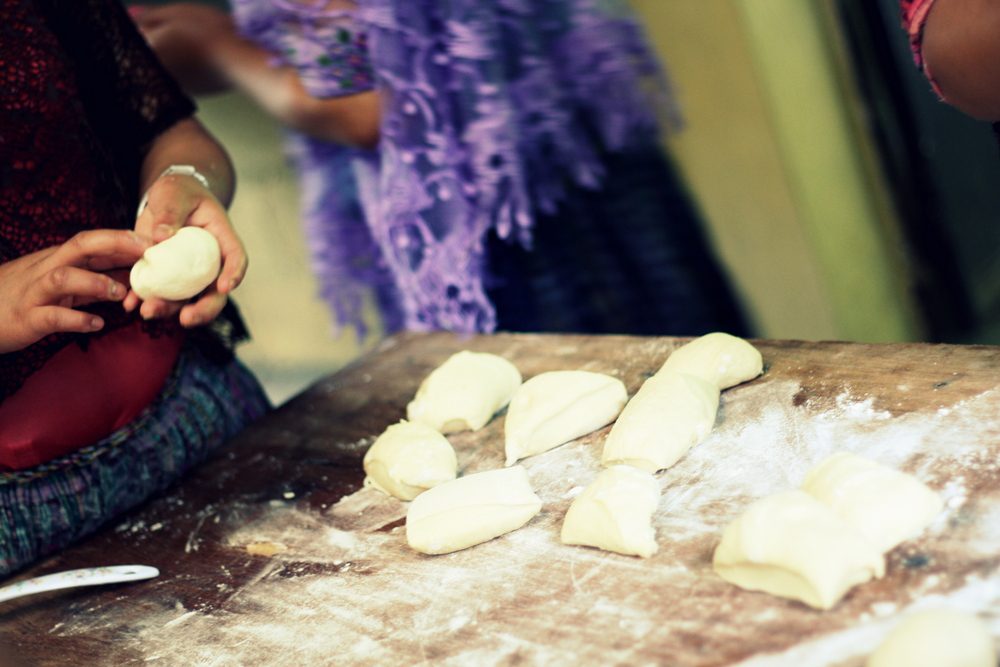 For being complete novices, the buns (for that is what we shaped the dough into) turned out marvelously. We sold out in mere minutes. 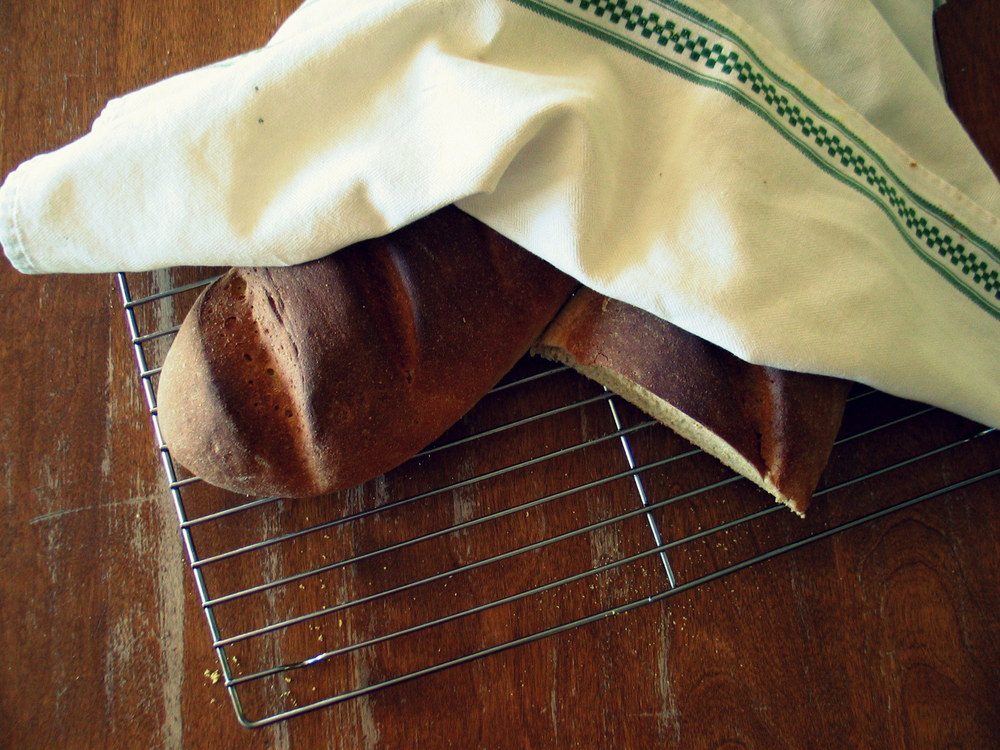 Lately, I’ve been making this recipe almost daily. Mid-afternoon, I mix up the dough and set it to rise. Towards suppertime, I shape the dough and then let it rest while I pull together the main dish. While kids are showering and the table is being set, the rolls bake. We eat one pan of rolls with our meal, saving the second pan of rolls (or loaf of bread) for the next day’s lunch sandwiches. 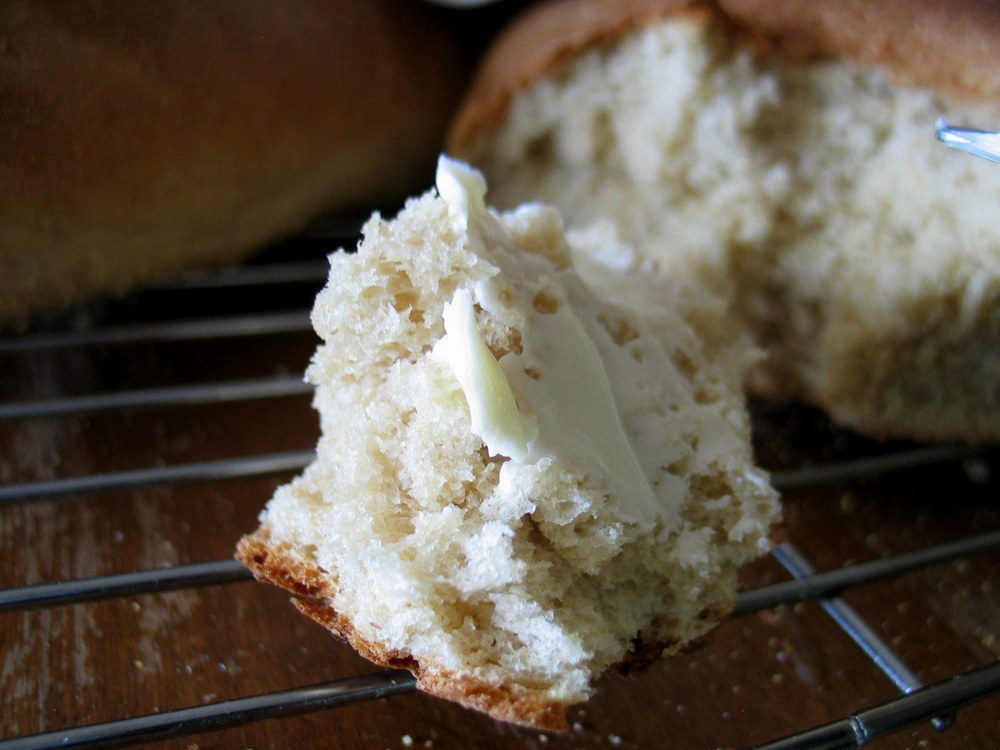 Confession: it bothers me that this recipe is called “French bread” because I think of French bread as crusty on the outside and chewy with lots of holes on the inside. This is not that French bread—it’s just a good, simple bread. That’s all.

The recipe is flexible. Some of my common changes:

*doubling the sugar (shh!)
*subbing some of the white flour with a couple cups of whole wheat
*adding leftover cooked oatmeal
*using milk instead of water
*using honey (or brown sugar or molasses) in place of sugar
*tossing in some flaxmeal, wheat germ, or wheat bran
*instead of oil, using butter or shortening

This bread is best eaten the same day it’s made, though leftovers work fine for sandwiches, toast, grilled cheese, French toast, and baked French toast. Lots of French cooking going on around here…

In a small bowl, combine the yeast, the half cup of warm water, and pinch of sugar (to make the yeast ecstatic). Set aside for about five minutes or until frothy.

In a large bowl, combine the two tablespoons sugar, salt, oil, and the two cups of water. Stir well and, if using hot water, let it sit until lukewarm so as not to murder the ecstatic yeast. Add the yeast and a couple more cups of flour. Stir, continuing to add more flour until the dough is stiff enough to be kneaded. Don’t add too much flour, though! The trick is to keep the dough a little wet and supple—too much flour and it turns into a rock-hard, unyielding lump of frustration. (My daughter added too much flour this last time and I had to knead in water to loosen it up. Not fun.)

Knead the dough until smooth and elasticky, five to ten minutes worth of arm exercise. Dust the bottom of the still-dirty bread bowl with flour and put the dough back in it. Sprinkle with a little more flour and cover with a cloth. Let the dough rise until double—this should take 45 minutes to an hour.

Shape the dough as desired (see below), let rise until slightly poofy but not doubled (or it will collapse in the oven), and bake in a 350 degree oven until golden brown.

Options
*Basic loaves: divide the dough in half, shape into loaves, and place, seam-side down, in two greased loaf pans.
*(mock) French bread loaves: divide the dough in half and shape into long loaves, about 12 inches long. Place seam-side down on a greased baking tray, leaving 3 or 4 inches between the loaves. Sprinkle the tops with flour before making 4 or 5 quarter-inch slashes in each loaf.
*Dinner rolls: shape into 24 rolls and place in greased baking dishes. Beat an egg together with a tablespoon of water. Brush the the tops of the rolls with the egg wash. Sprinkle the rolls with sesame seeds, poppy seeds, rolled oats, etc.
*Butterhorns: divide the dough in half. Roll out one of the halves into a large circle between 12 and 16 inches in diameter. Brush several tablespoons of soft butter over the dough. Using a sharp knife, cut the dough into 12-16 pizza wedges. Working with one wedge and starting from the wide end, roll it up. Place the butterhorn, pointy tip underneath, on a greased baking sheet. Repeat with the remaining wedges and dough. Immediately after pulling the hot rolls from the oven, brush the tops with melted butter.
*Et cetera: such as cloverleaf rolls and emergency sweet rolls, yum.