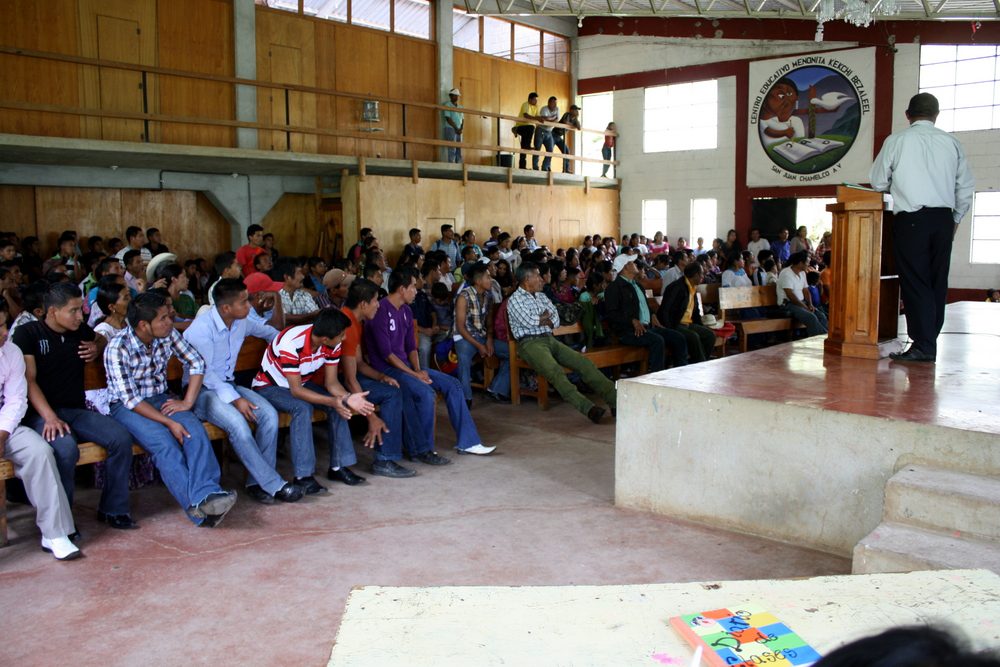 Sometimes I worry that I’ve painted a bad picture of Bezaleel. True, I sometimes get terribly frustrated and bored, but I really do enjoy the place. The students are friendly, the teachers jolly, and the days that I have something to do, time flies and I leave work feeling both energized and whipped—an ideal combination.

So to prove that it’s not all walking through water, here are some pictures of how we spend our days.

At the start of the second half of the year, there was a parent-teacher-staff-student conference.

The director presented information and the parents voiced complaints and
concerns, mostly around the areas of food quality (it’s poor) and cell
phone usage. It’s against school rules for students to have cell phones,
and at that point in the year, the office already had a stash of 44
confiscated phones. Some of the parents wanted their kids to have phones
and other parents were opposed to it as it will distract from their
studying. No conclusions were reached, but it was interesting to see how
people present (by standing up) and argue a point (with an excessive
amount of words and lots of repetition).

After the meeting, the parents had to sign the notes. For legal purposes, or something. 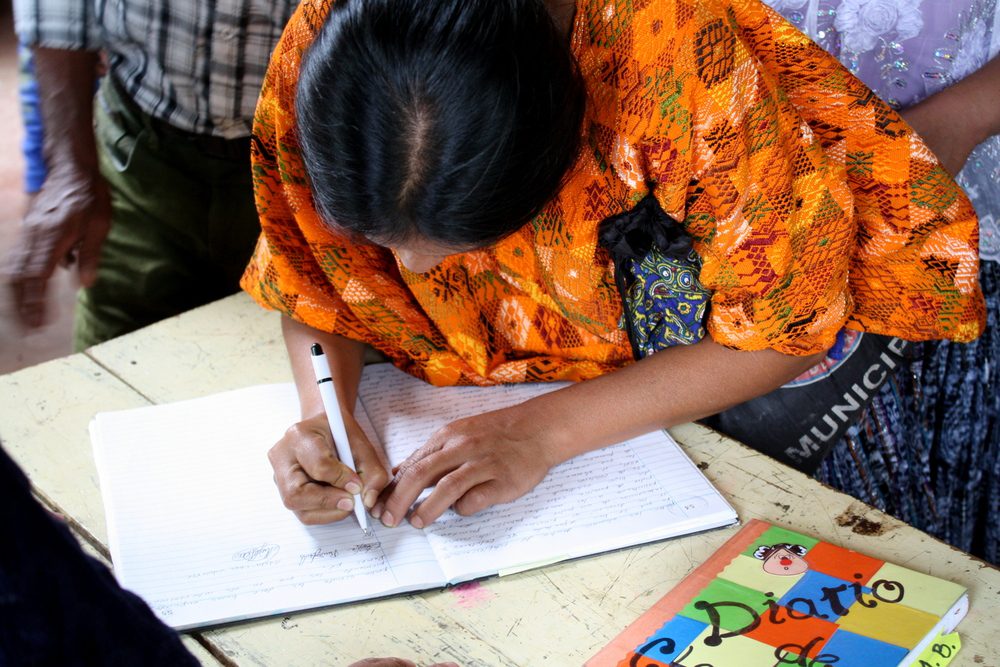 Not everyone is literate, so there was also a ink pad for thumb prints. 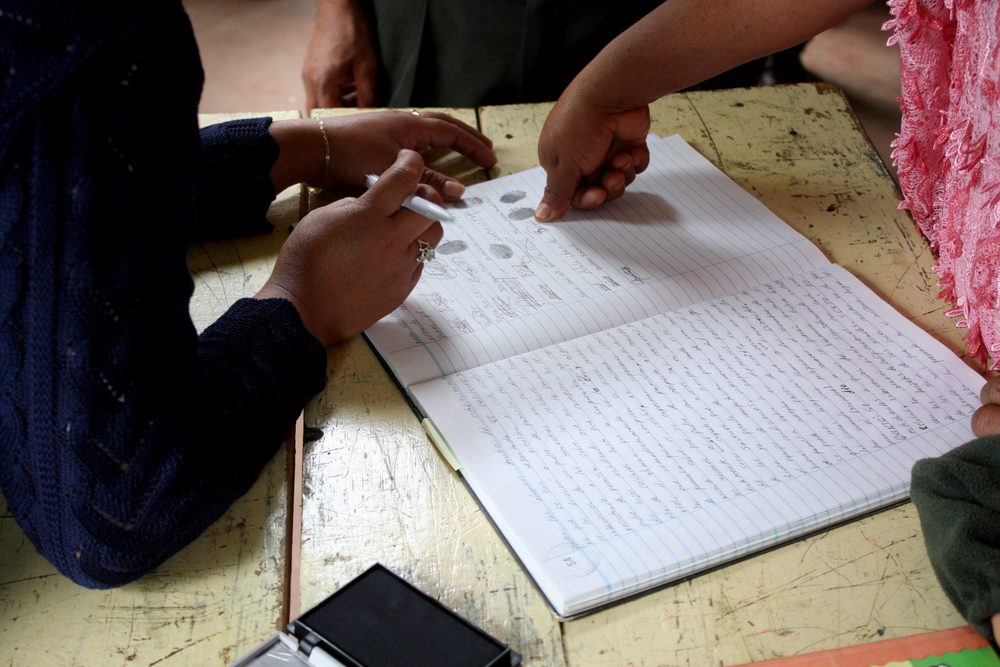 Afterwards, the secretary wrote their names inside their print. 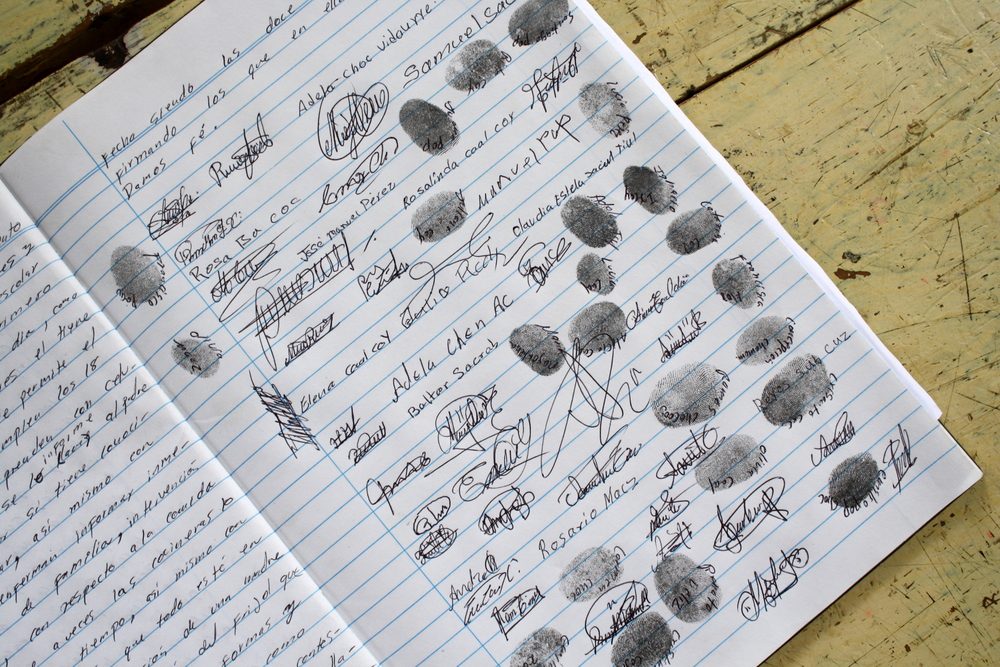 The disturbing number of thumb prints gives me the urge to quit my life in the States and travel around Guatemala teaching adult literacy.

Okay, not really actually quit my life. (You can stop freaking out now, Mom.) Just a little bit really. Literacy is so liberating and exciting. I want everyone to feel the reading rush, you know?

There are thirteen girls in my baking class, though only about eleven have been attending. (Hm, I wonder where the other ones went. Maybe I should be concerned?)

One day while we were waiting for the cakes to bake, I told them I wanted a photo. They were happy to oblige. 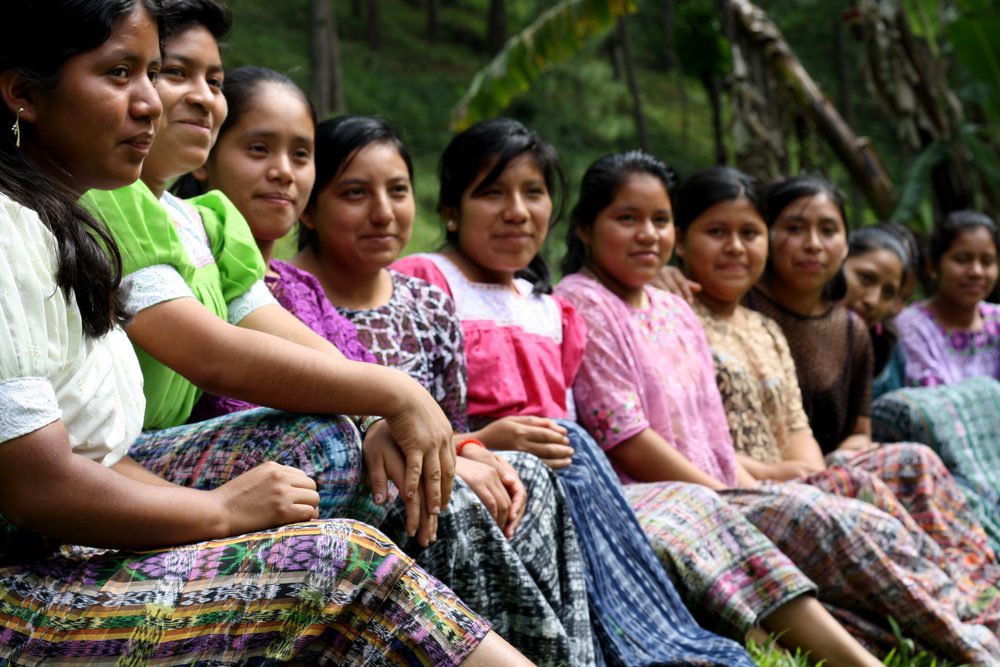 These girls aren’t the most industrious group of workers, I admit. In fact, some days I’m ready to whack ’em over the head with a rolling pin. But for all our problems—their beligerence and my strictness—we’re rather fond of each other. 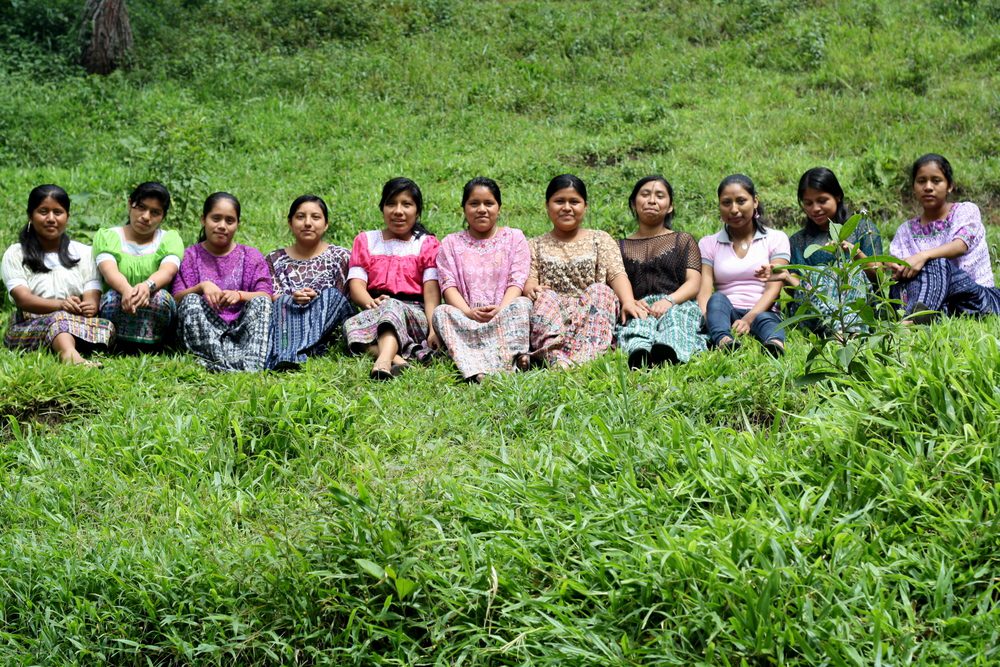 I ordered them to scrunch closer together for the photo. 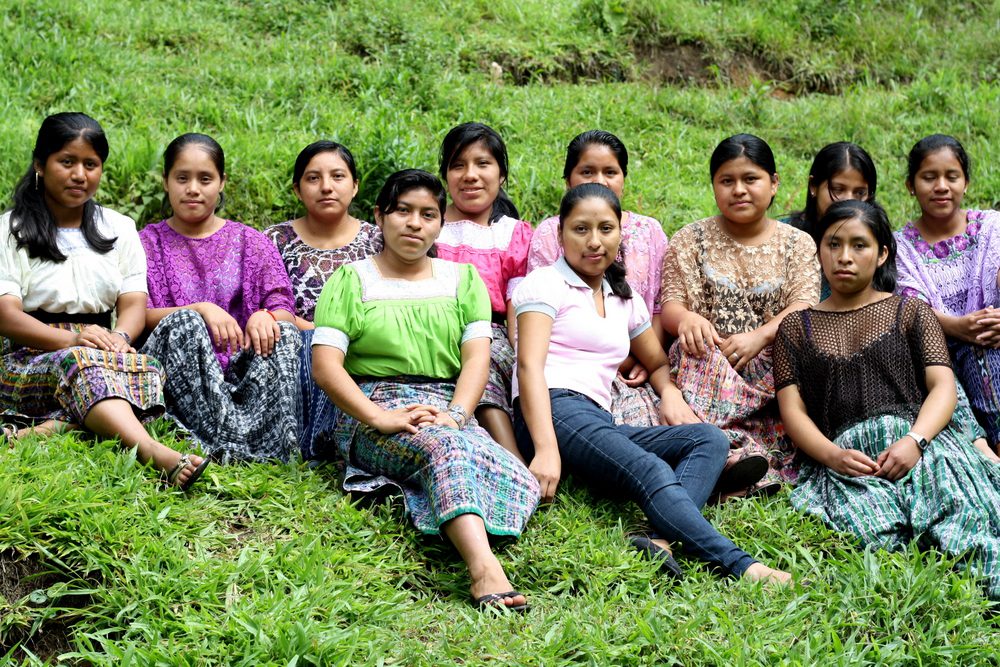 Now, look at Pascuala (green shirt) in the front left. See her? With her ankle poking out most fetchingly?

Well. Guess what happens when I say, “Oh-la-la! Look at those legs!” 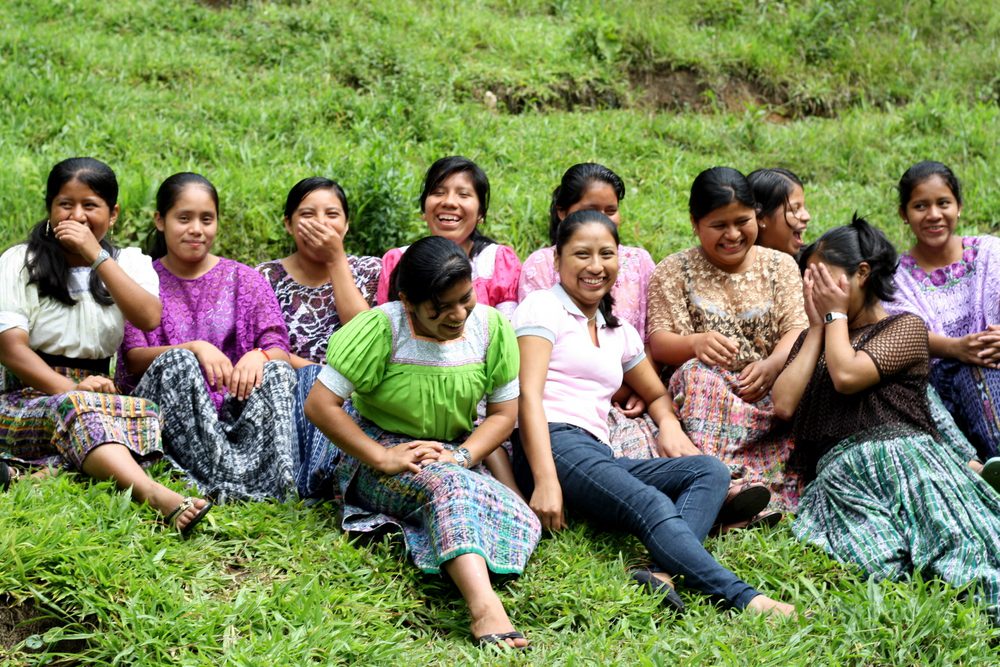 They’re lucky they didn’t tumble down hill in their fit of glee.

This is Oscar. He’s one of the maintenance guys. He’s actually more of a janitor (he’s not really a fixer-upper type of guy), but he’s indispensable with his willingness to chip in and his positive attitude. 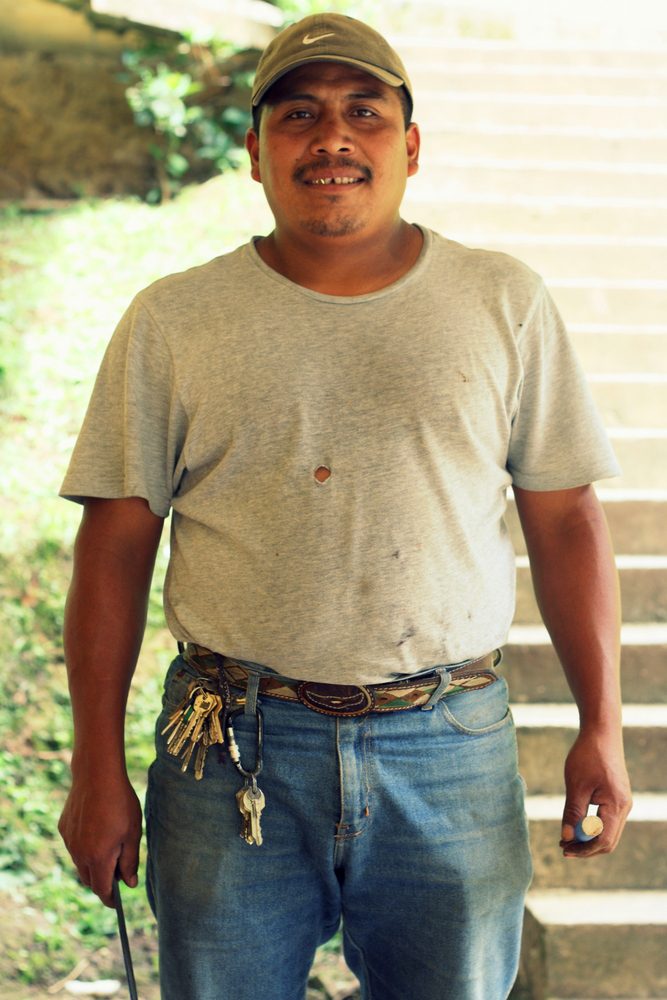 He’s a friendly guy. Sometimes he calls my husband up, just to see how he’s doing. It’s sweet! 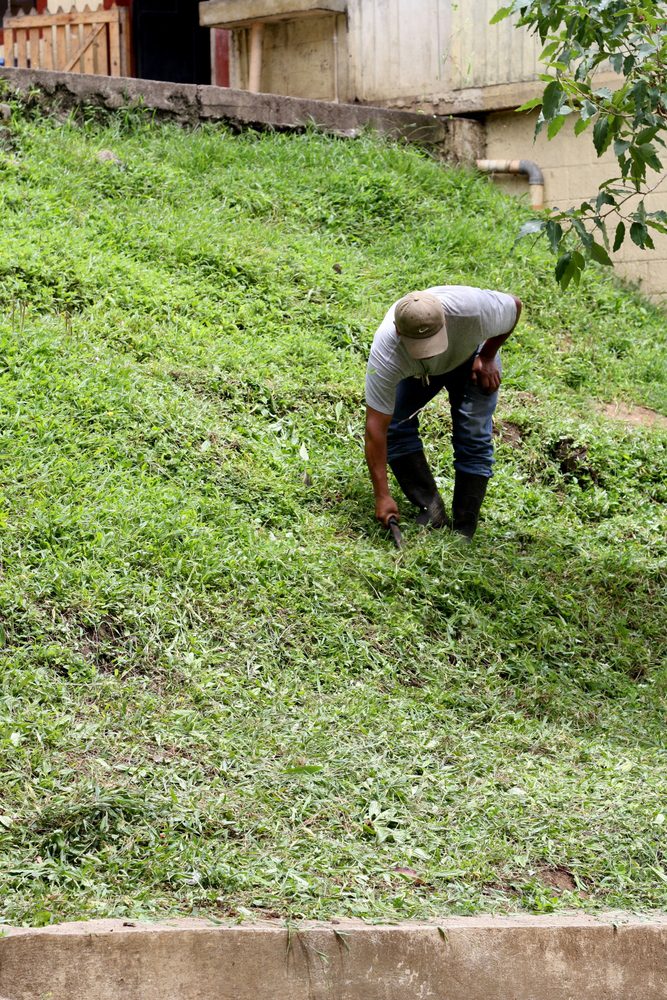 Also, like many Guatemalan men, he’s touchy-feely with other men. He’s fond of plopping down alongside my I-need-my-personal-space husband and draping an arm around his shoulders. It’s pretty much hysterical to watch my husband struggle to maintain composure while internally wigging out.

This worker is taking a wheelbarrow load of grub up to the girls’ dorm. 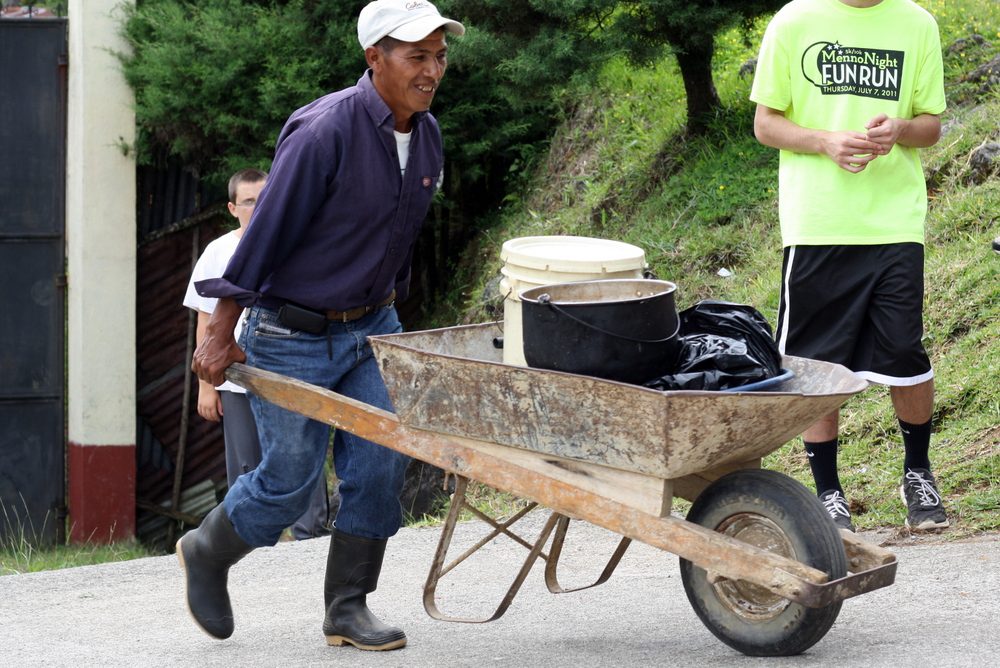 The girls don’t eat with the guys, so the food gets shuttled.

Here’s Mario hauling one of my ingredient boxes up the stairs to the bakery. (Stuff is always getting hauled: food, tools, books, picnic tables…) 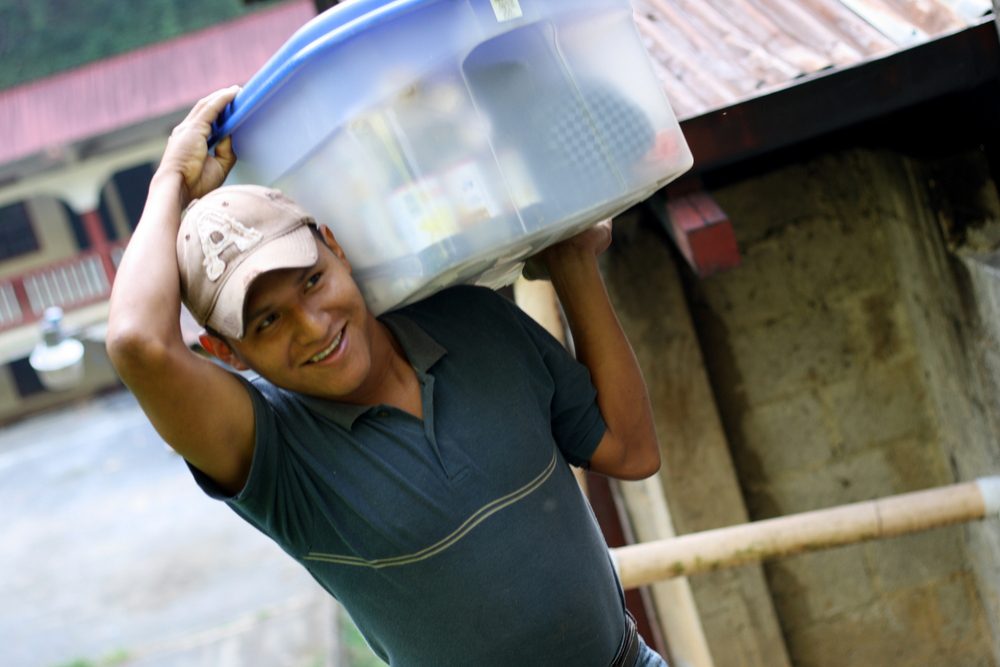 I have to keep my supplies down in the workers’ storage shed (my husband keeps an eye on it) because there’s a mouse infestation up in the bakery.

Here, let me show you: 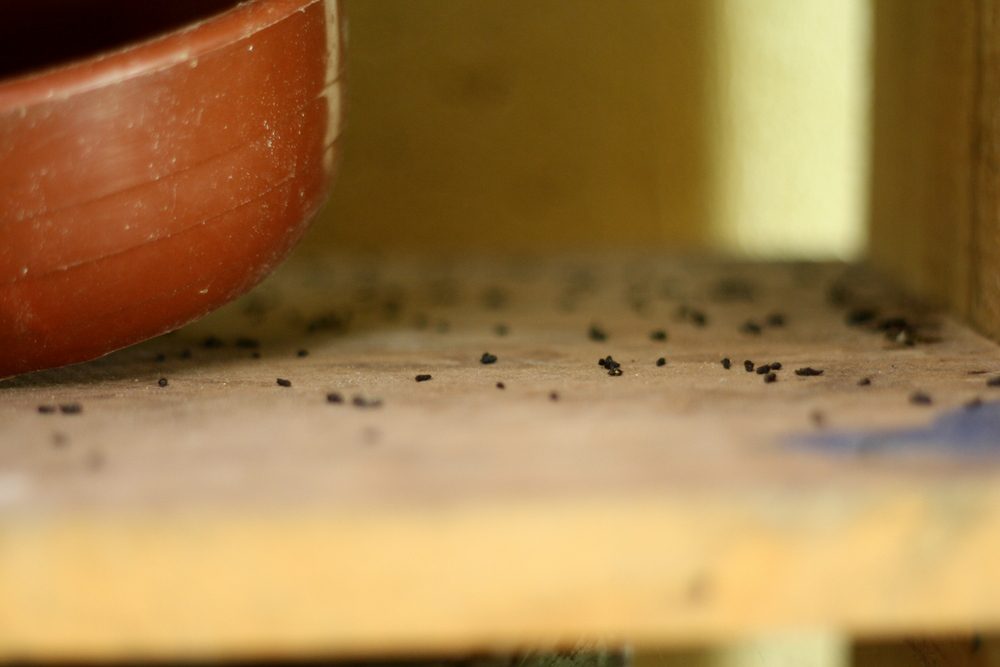 When I open the doors in the morning, there’s lots of scurrying.

The reason there is so much poo is because:

1) the bakery is right next to the woods and the windows aren’t covered, and

2) the weekend bakers don’t wash out the pans, sweep, or wipe off the tables.

(What’s even worse, they scrape the dirty pans out onto the floor, and then wipe down the dirty baking trays—that have been sitting out for a week—with a greasy, filthy rag that’s tossed in the corner somewhere. Shudder.)

So on the mornings when I come in, I have the girls sweep, wash all the pans, scrub the tables with soap and then disinfect them. One of my proudest teaching moments was the first time the girls did all that cleaning up without being told.

Here’s my husband and Mario hauling a stove up to the baking room. 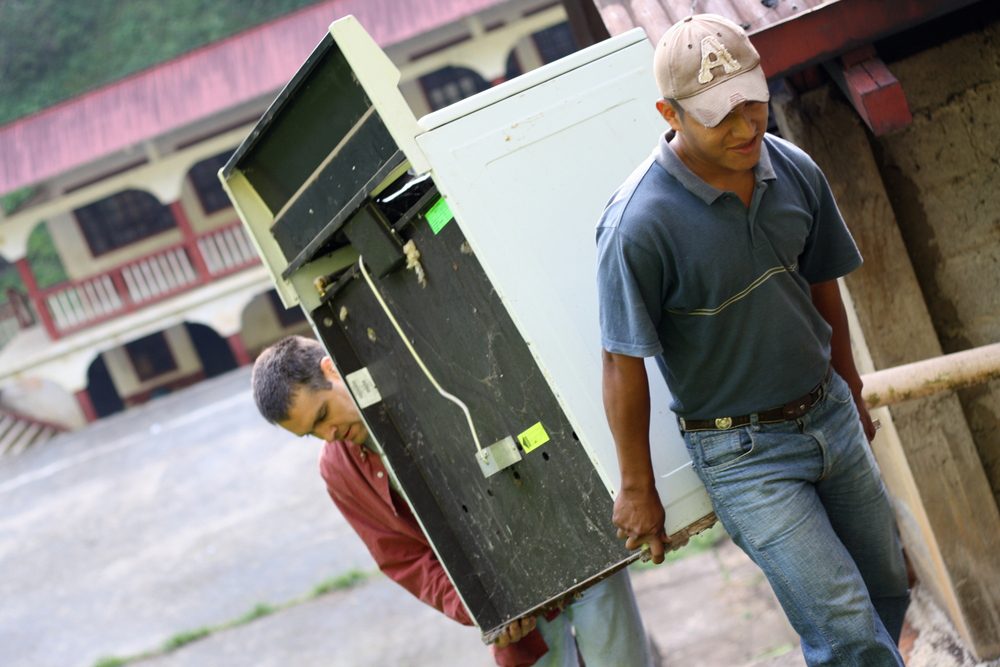 See, the baking room is no longer the bakery—it’s the kitchen. The cooking instructor wanted a smaller room and I needed more space, so we flip-flopped. In the midst of the change, my husband discovered a perfectly good kitchen stove/oven (see above). The cooking instructor had been wanting one and here Bezaleel had one hiding out in some room the whole time.

(This is supposed to be a positive post, and it is, but I can’t not say the truth: Bezaleel has a lot of stuff that’s been donated, and then, because of all the worker turnaround (a K’ekchi’ cultural thing), it gets forgotten. The stove is just one small example of this unfortunate pattern.)

My husband is all over the place, working on first one thing and then another. Here, he’s welding a leaky pipe. Or something. 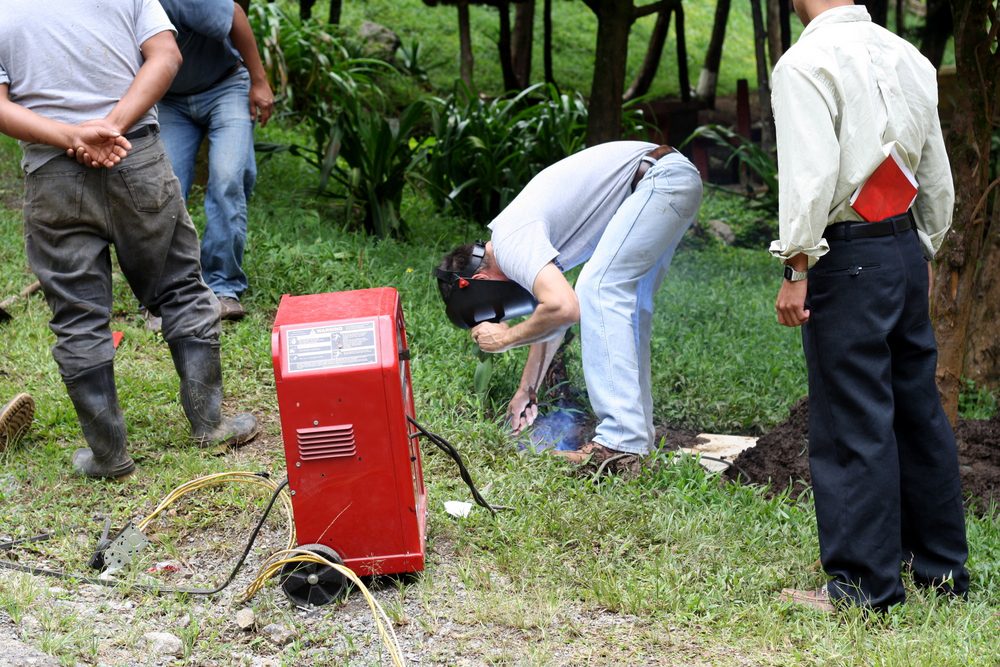 A few people gathered to watch, but within minutes the group had turned into a minor multitude. 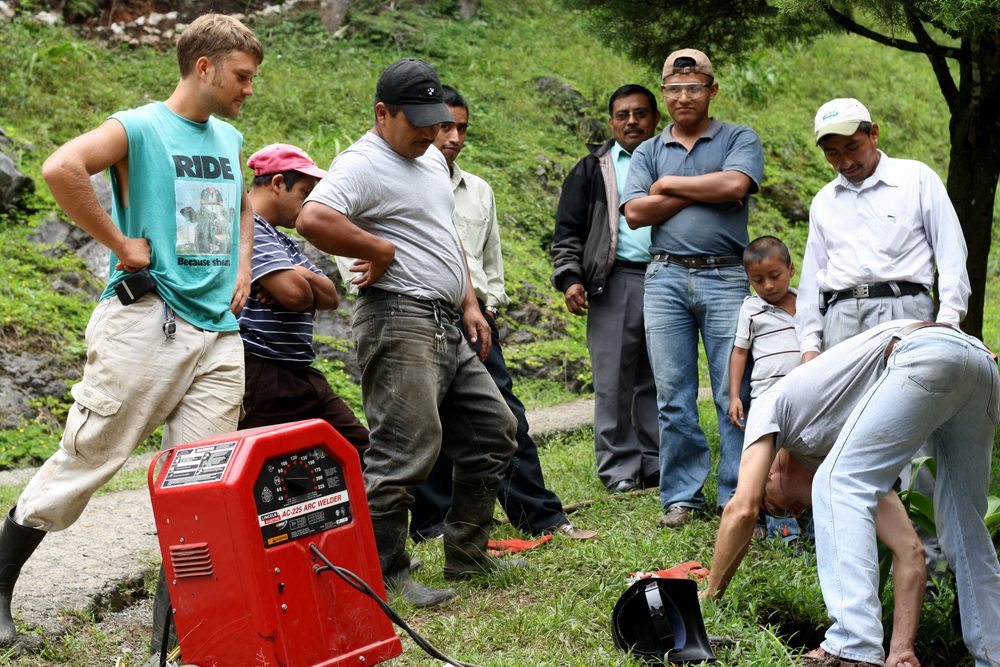 It’s not like my husband is that interesting to watch. He’s quiet and looks angry all the time. But in spite of this, people seem to pretty much adore him. 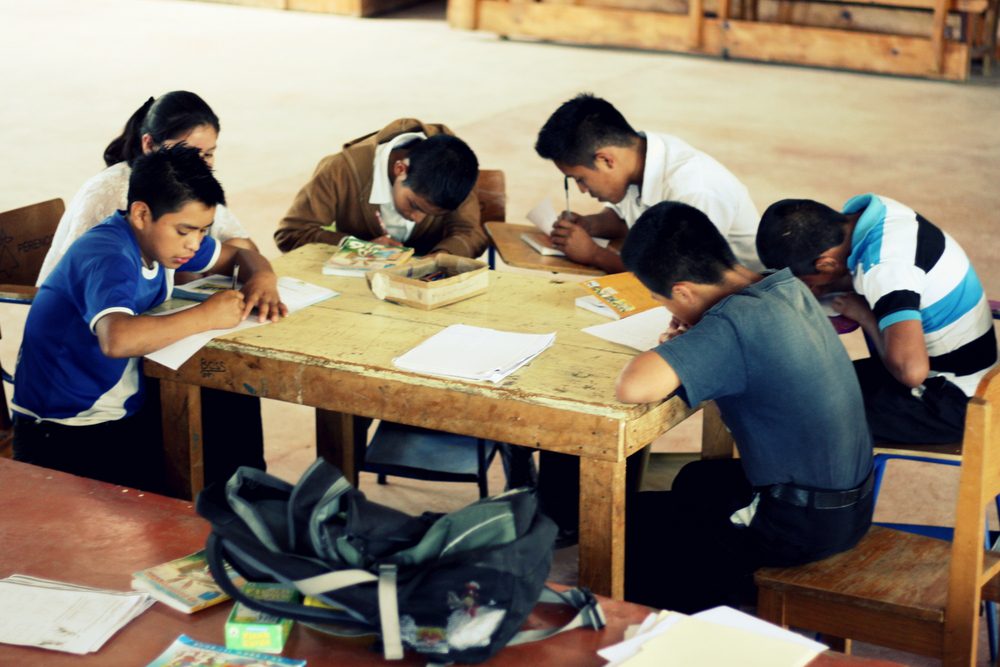 These five students are the results of weeks of pleading, cajoling, and, at the very end, lecturing (the director, no less).

This group of first-year students struggle the most with reading. (I’m not even sure that one of them yet knows how to speak Spanish.) Until they came to Bezaleel in January, they probably only ever spoke K’ekchi’. In other words, they’re at about the same place my children are in school, in terms of second language acquisition.

We spend our class periods working on reading, vocabulary, and comprehension, but they’re begging to do math, too. I think I’ll start them on basic subtraction tomorrow.