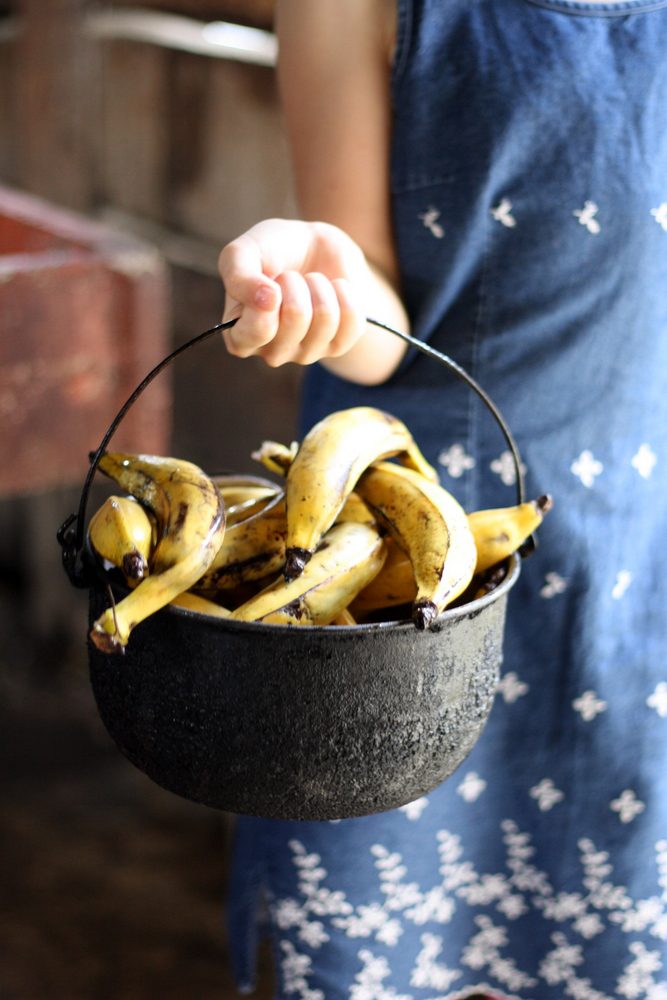 Forgive the photo blurs.
I was working in dark house on a rainy day with almost no natural light.

Back when I wrote about struggling to belong, Reader Kathy left a comment with a bunch of practical suggestions, one of which was to ask someone “how do you make…” and then hopefully score an invitation to someone’s home for a cooking lesson.

I assumed that I’d end up cooking with people in their homes because that’s what I did in Nicaragua. But that’s not what happened here. We don’t live in a community, and our co-workers go home at the end of the day—their homes aren’t close by or easily accessible. Cooking with them in their kitchens just wasn’t happening.

So, with Kathy’s encouragement, I got pushy. I made mention, to the staff room in general, that I’d love to learn how to cook Guatemalan food, and immediately Amada suggested that I come to her house to cook with her grandmother. “Really?” I said, and then real fast, before she changed her mind, “Okay, I’d love to!” We swapped numbers, agreed to get together over the break, and then nothing happened. I wasn’t really surprised. Following through with plans isn’t exactly the first order of business in Latin America.

But Amada hadn’t forgotten, and she brought the topic up again after our break. Come over on Saturday, she said.

So Saturday afternoon, in the middle of a torrential downpour, I packed up a large square of chocolate peanut butter cake as a gift, and the girls and I headed to Carcha.

Amada met us at the bus stop and we followed after her like a gaggle of ducks as she ran some errands and then took us to an orchid exposition (and paid our entrance fee). Then we wove our way out of the market and up and down some side streets and finally, up a steep, chunky gravel road (more of a path, really), to a long, skinny, patched-together house at the top of the hill.

Once inside, we sat down to a feast of Chinese fried rice with chicken and tortillas and big mugs of coffee. The girls ate ravenously, as though they hadn’t just eaten lunch two hours before. 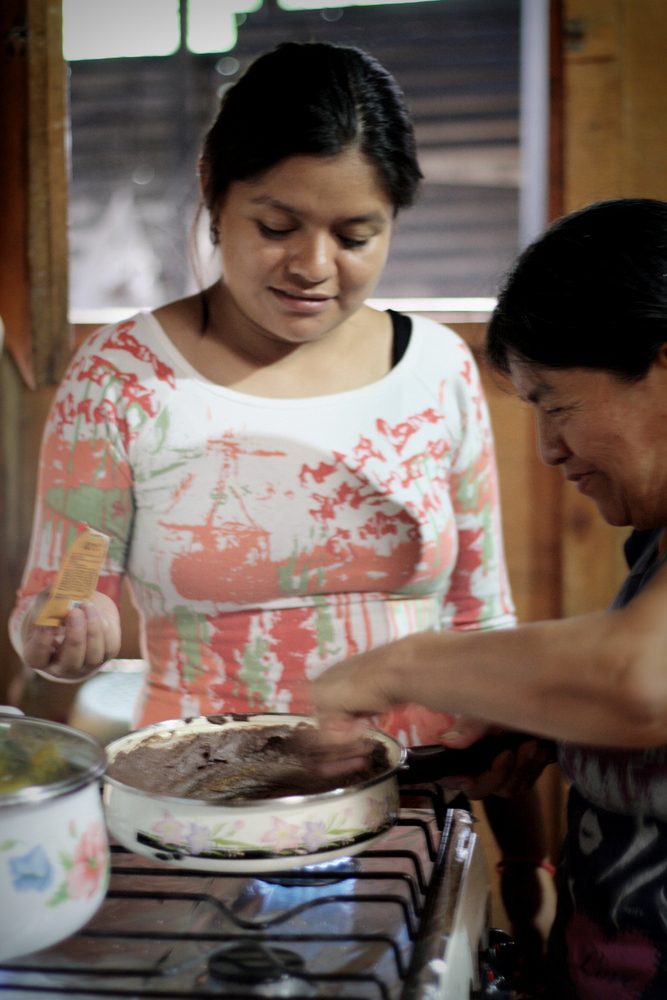 Amada and her grandmother (who is younger than my mother)

I met Amada’s younger sister who never stops laughing. The mother filled me in on Amada’s dating life, much to Amada’s embarrassment. The Grandmother told me about her work with the Catholic church and her experiences cooking for a smorgasbord of priests. She also regaled me with entertaining tales about the fathers of her children: three children and three fathers. Other women, drinking, and knives were involved. 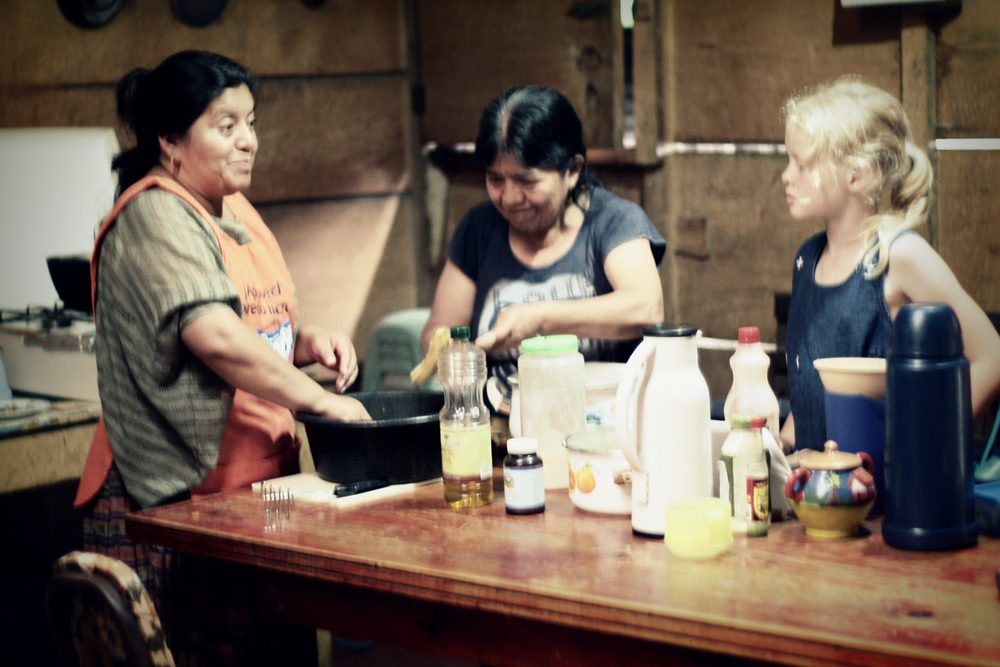 the mother and the grandmother

And then we got down to the cooking project: rellenitos, a sweet
snack of mashed up plantains filled with sweet refried beans, fried in
oil, and then topped with sugar. 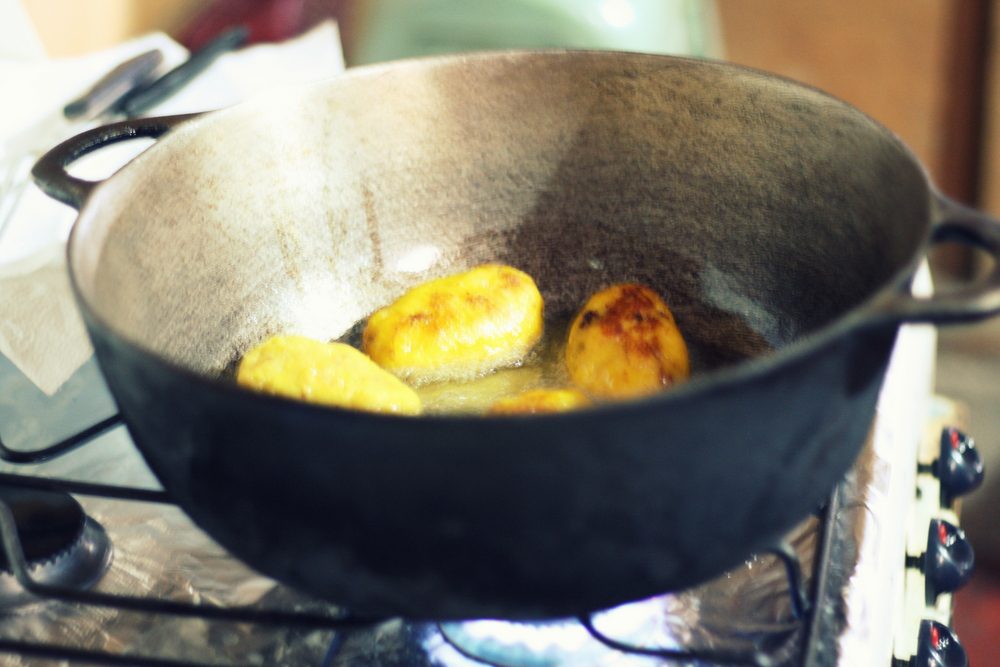 I’m wondering if I should try to lug home a cooking kettle like this one.

They were fabulous. I ate two. 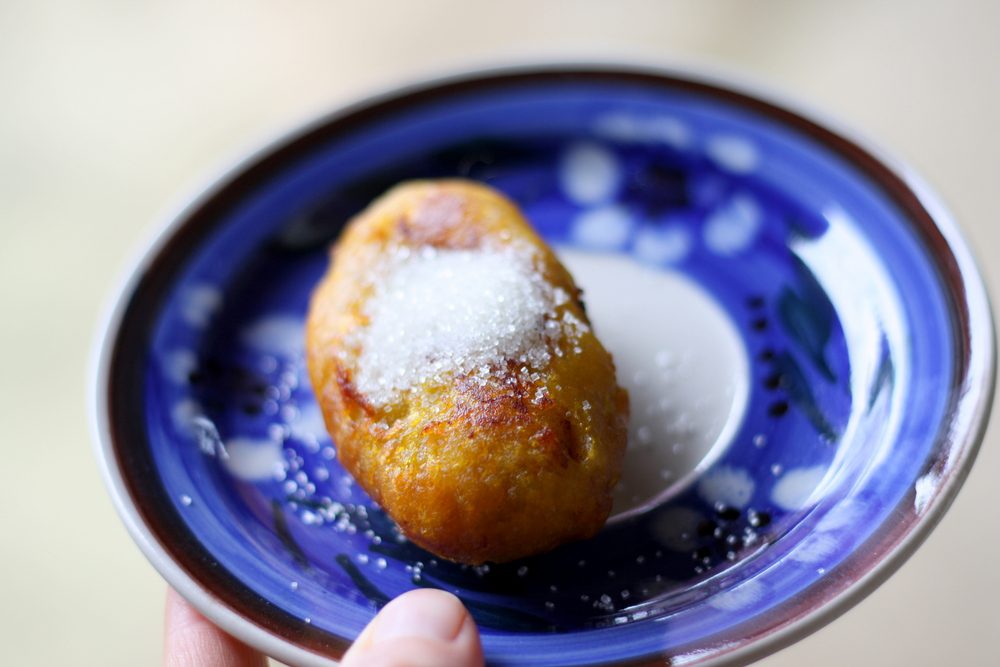 While we visited and worked, the son and father wondered through the kitchen, cousins came to visit, the mother bathed, the daughter dressed my daughter up in K’ekchi’ clothing, someone went out and bought soda and then fed it to my daughters. The mother decided to go visit an ailing uncle and before leaving she bent down before her mother and asked for a blessing. A couple kids/cousins accompanied her so she wouldn’t have to be sad by herself. 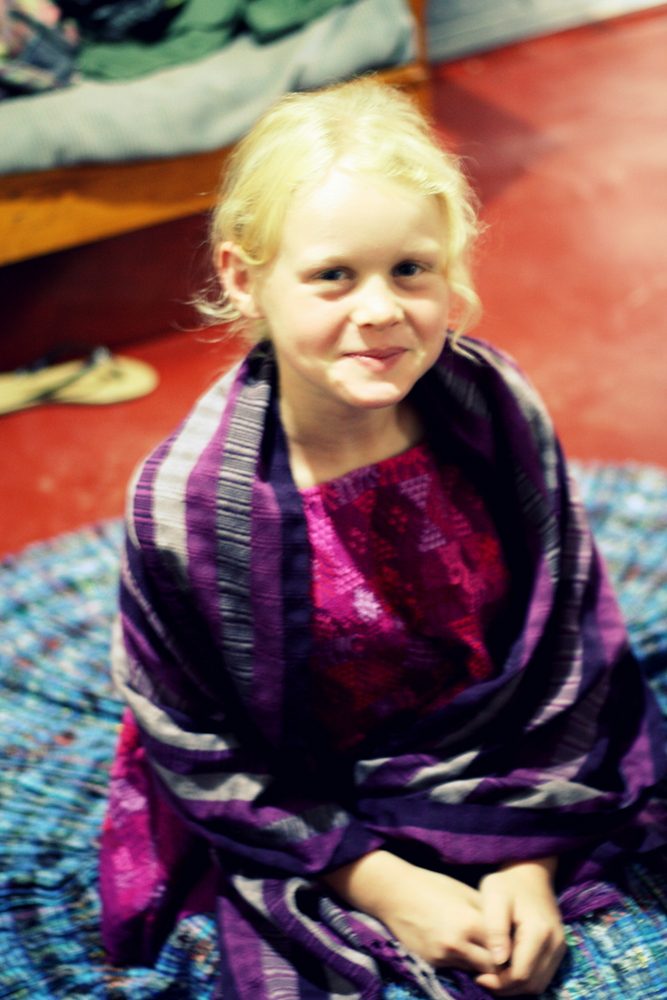 On the living room floor: they arranged her.

My girls had a grand old time. This was their first time really being in a home, and they were fascinated by the ancient rabbit living by the pila, the friendly dog, they dish-washing system, the TV, the guests, how the grandmother got the refried beans out of the can (by cutting off the lid and then poking a hole in the other end and blowing into it until the beans slipped out just like a tube of wiggling cranberry sauce). My younger daughter took it upon herself to waltz back and forth between kitchen and living room, serving snacks and drinks and then washing the dishes. This tickled the women to no end. 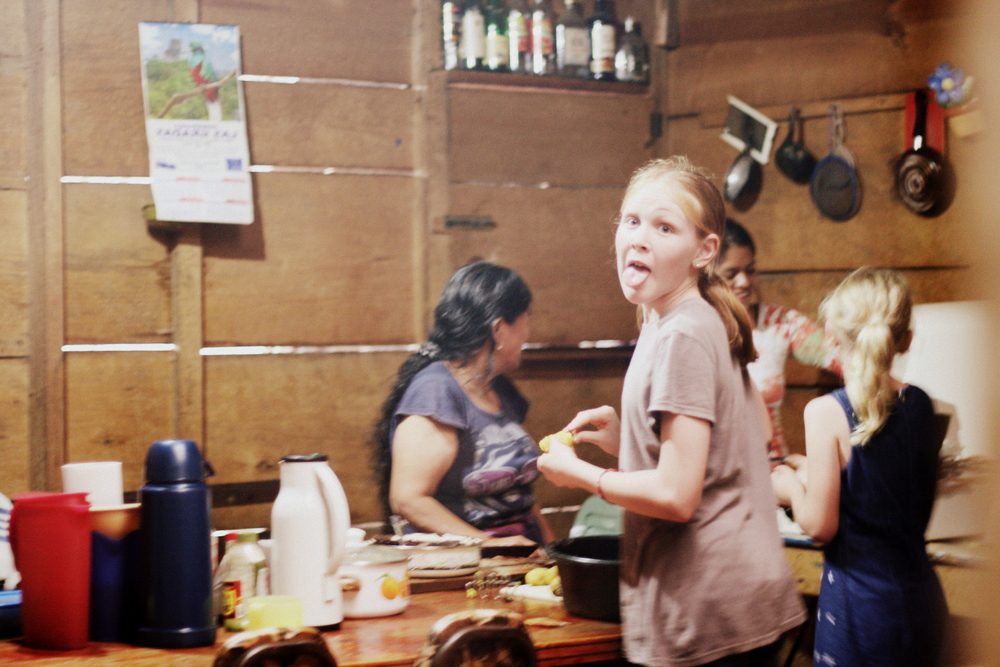 The photo bomber.
(I took this photo via the mirror in the corner of the kitchen.)

The grandmother was in the middle of starting the second cooking project—banana empanadas—when my husband called wondering where I was. It was after six and the buses would soon stop running. So they packed food into containers for us, hugged us tight, and off we went.

When I got home, I was glowing from grease and happiness. We’ve made  plans (loose, because there is no other way) for the next lesson: tamales. I can’t wait. 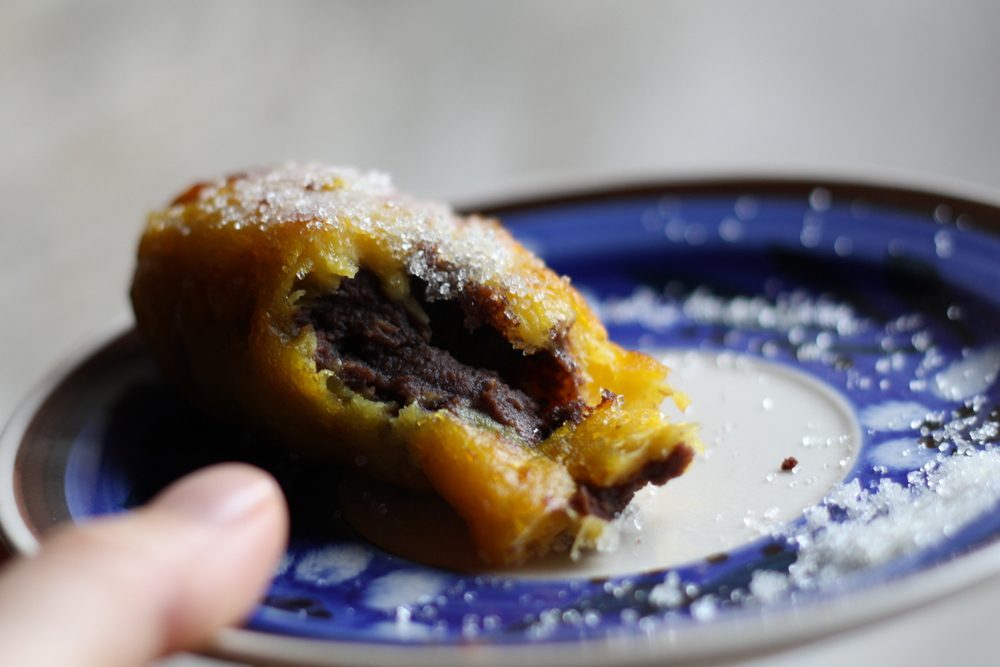 It seems counterintuitive to sweeten something that’s flavored with onions and garlic, but it works. The grandmother used canned refried beans that already contained savory seasonings, but you can also use homemade refried beans. The key is to cook the refried beans until they are thick like cookie dough.

The finished rellenitos are caramelized and chewy on the outside and creamy sweet on the inside. Leftovers can be reheated in a microwave or eaten cold, though they are best fresh. Oh, and they also recommend serving them with a dollop of sour cream on top.

For more instructions and clearer pictures, visit this blog.

Scrub the unpeeled plantains with soap and water. Put them in a soup pot, cover them with water, smack a lid on top, and bring the water to a boil. Reduce the heat and cook at a gentle boil for about 15 minutes, or until the skins split.

Remove the plantains from the water, peel, and mash the fruit with a potato masher. (If desired, chill the cooking water and serve it as a drink.) Add sugar—anywhere from 1/4 to ½ cup, depending on taste—and about a 1/4 to a ½ teaspoon of cinnamon. Set aside.

Pour a couple tablespoons of oil into a skillet and add a couple thick slices of onion. Simmer on low heat until the onion is tender—about 10 minutes. Remove the onion with a slotted spoon and discard. Add the refried beans and heat through. Add sugar to taste—maybe 1/3 cup. Some people add a Hershey’s chocolate bar at this point. Cook the beans until there is no sign of runniness.

Pour a half-inch of oil into a large cooking pot with high sides and set over medium high heat.

To form the rellenitos, scoop up a ball of mashed plantain and, using one hand, fashion it into a nest in the palm of the other hand. Place a smaller scoop of refried beans in the center of the nest and pinch the sides shut to seal. Smooth the rellenito into an oval and set on a plate. If the dough gets too sticky, simply wet your hands with water.

Once you have four or five rellenitos waiting, place them in the oil and fry, turning every few minutes so that they get nice and golden brown on all sides. Remove the rellenitos and drain on paper towels. Sprinkle with white sugar and serve warm.