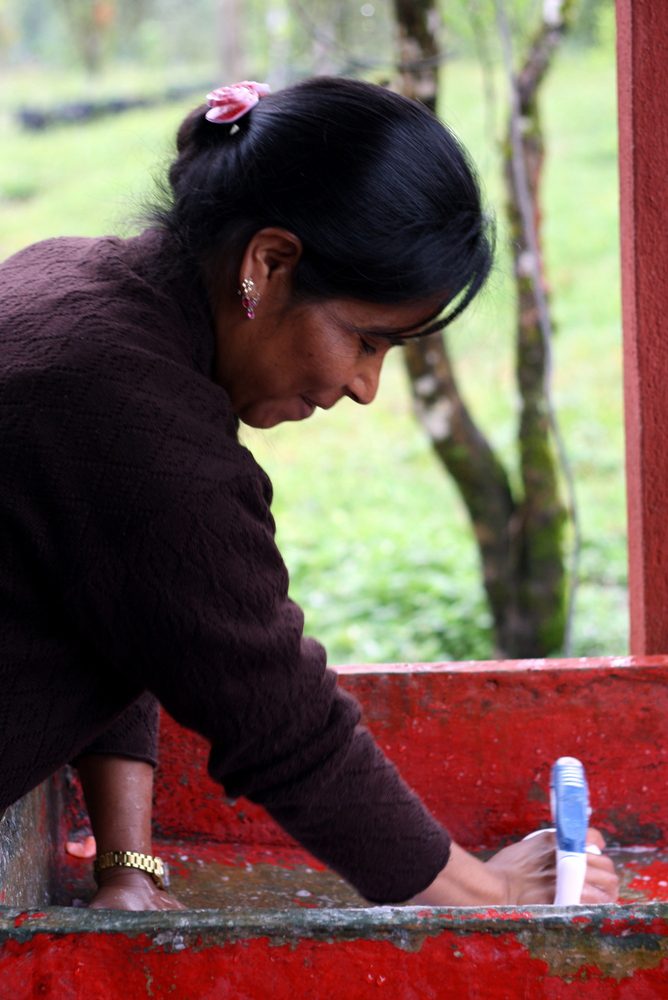 Having a maid is a confusing thing.
I tried to organize my thoughts into an orderly progression complete
with smooth transitions and a tidy conclusion. It didn’t work, so I settled for snippets.
(Also, saying “the help” makes me think of poo-pie. Just putting that out there.)
***

“Excuse me for bothering you, but I have a favor to ask.” Jovita nervously fiddled with the broom handle.

I was getting ready to leave for work and had come over to where she was sweeping the kitchen to say goodbye.

“Would you be able to loan me 500 quetzales?” She looked everywhere but in my eyes. “My children need help with their schooling and we have been having a lot of difficulty lately. We don’t have enough food, either, and last night the children didn’t have supper.”

This wasn’t the first time Jovita had asked for money. Back in the beginning she’d asked for a raise. We were still in the negotiating stages and I’d raised her pay by five quetzales.

Then she asked for a paid Easter week holiday. Answer: yes, of course.

She’d asked me to be the godparent (er, fairy godmother) for two of her children. Answer: no.

She’d asked for money for the children’s schooling. Answer: no.

And now she was asking for a loan. Quite frankly, I was fed up with all the asking.

Jovita has been working for us for about three months now. We decided to let Luvia, the woman who helped us in the very beginning, go once we moved out into the country. The distance was pretty great for Luvia. Plus, she wasn’t all that great at housekeeping, so we let her go.

Jovita is 39 years old. She has seven children. She walks one hour each way to get to my house, and she comes three times a week: Monday, Wednesday, and Friday. She arrives at eight and leaves at noon.

While here, she sweeps and mops the floor, scrubs the bathroom, and sweeps the patio and porch. If there is time leftover, she washes windows, wipes down doors, etc.

She is quiet and unassuming, and after Luvia’s chattery, bubbly bossiness, I appreciate the calm.

I pay Jovita Q40 for four hours of work. This is the equivalent of two bags of cornflakes.

Here, the person who cleans your house is called your “muchacha” (girl). Even if the woman is fifty years old, if she washes your underwear, she’s called a girl. This makes me profoundly uncomfortable.

In fact, having a servant makes my conscience get the nervous twitch. I was raised that it was uppity to expect other people to do my dirty work. Whenever I baulked at getting my hands dirty, my mother would shrill, “There aren’t any princesses in this house!” (She made no mention of queens.) (Actually, that’s not true. I think she periodically crowed, “I am queen! Obey! Serve!” Or maybe I’m confusing her with me?)

The do-your-own-dirty work logic went something like this: if we get so busy or have so much stuff that we aren’t able to scrub our own shower scum or corral our own dust bunnies, then we had better slow down. Caring for our living space and possessions helps prevent us from getting all-consumed with the rush-rush of life. It keeps us grounded. Furthermore, scrubbing a toilet gets us more than a clean toilet—it gets us some much needed perspective (and a loopy high from the cleaning products).

But then I wonder, is it even within a Guatemalan woman’s paradigm to believe that cleaning her own toilet might give her some perspective? Or could it be that that’s only what an elitist North American might think about the porcelain polishing? And if that’s the case…oh, the irony!

One of my biggest fears is that with a maid to pick up socks, my children will transform into entitled brats. According to this photo, it looks like they already have. 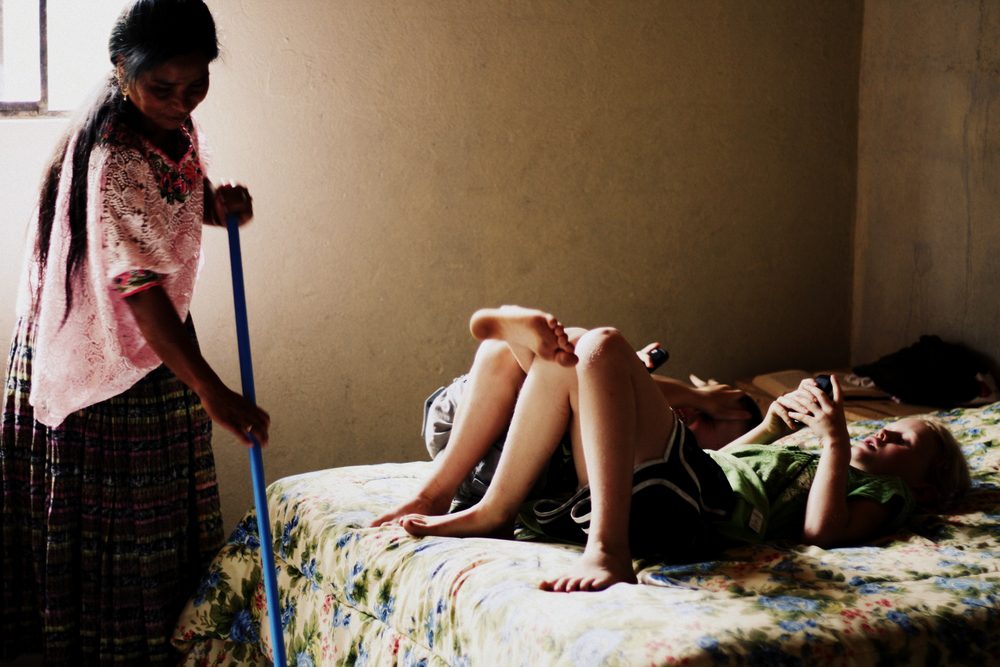 They haven’t, though, I don’t think. Taking a break from vacuuming and window washing isn’t going to shrink our souls (I hope). And besides, they still pick up, fold laundry, wash dishes, and do other odd jobs upon demand.

They even cut the grass by hand. With machetes. 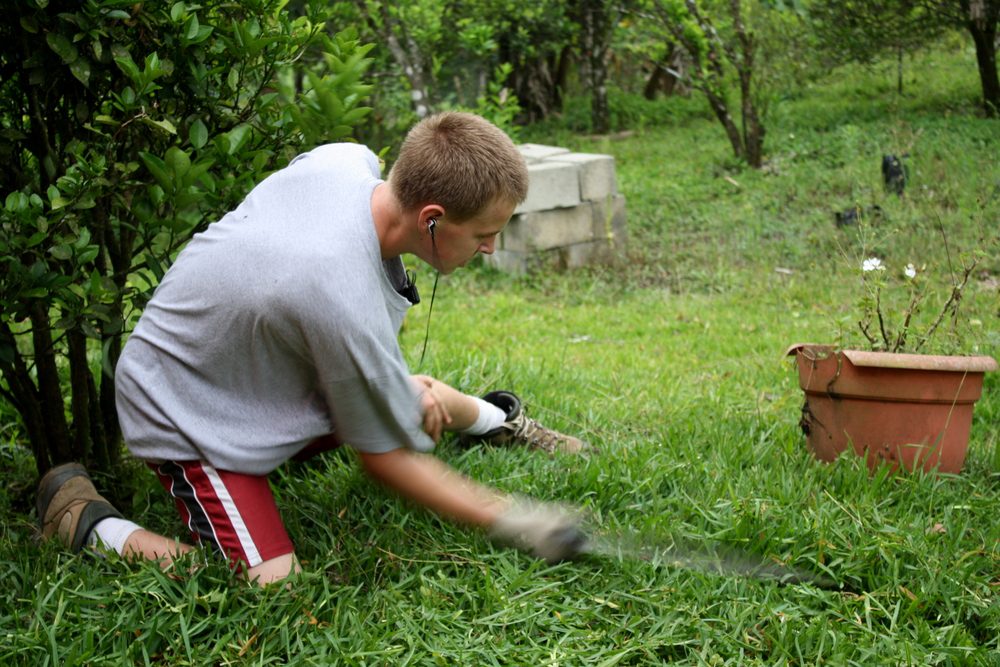 The fact is this: our life is different here. At home we have zero-turn mowers, cars, and central vac to help out. Here we have Jovita.

And if I’m to be completely honest, having a maid is wonderful. It feeds my repressed Lady Grantham fantasies.

Mother’s Day was coming up. Jovita had made mention that all women have off from work on that holiday. I didn’t say much—I wanted to check with someone else about the local customs first.

So one day at lunch, over our bowls of potato stew, I asked one of my co-workers if it’s the custom for house help to not work on Mother’s Day.

The dinning hall was mostly empty so I pressed for more details. I learned that:

These women work all day at the end of which they haven’t even earned enough money to buy a gallon of milk.

Why do they do it?

Jovita’s pleas for money tie me up in knots. I feel belittled and used, like all I am to her is An Opportunity To Exploit

It’s not her fault that she thinks all North Americans are wallowing in cash. We handed that idea to her via our smiley, let’s-help-all-the-poor-people short term missions, our wildly unrealistic reality shows, soaps, and pert newscasters, and our foreign policies that dictate, control, and ravage.

Sometimes when she asks me for favors, I feel like shouting, Hey, look. I come from a rich country and you come from a poor country. Neither of us had any say in that. We each have to work with what we’ve got. I struggle with comparing up and wanting more, too—

But I can’t really say that to someone who has less than me, can I? That would be crass. Thoughtless and cold.

So what do I say? I say, I’m sorry, and then I explain that all the money we are using right now is through our sponsoring agency (a mostly true statement). We are volunteers. We do not have an income.

And when she apologizes profusely for bothering me, I tell her not to worry about it, that I’m sorry she’s struggling, that I’m glad I can provide her with a job.

And I leave it at that. Because it’s impossible to explain mortgages and homeowner’s insurance and the cost of living and our huge, wonderful supportive community and doctor’s bills and the ridiculous price of a college education. The gap is too wide.

I want to treat her well. I want her to feel respected, and in turn I want to be respected. For who I am, another woman, only two years her junior, attempting to raise children, love my husband, and make a go of it in this little world, just like she is.

So that’s where we are. It’s convoluted and messy. I don’t know if I’m doing the right thing, and I certainly don’t have answers. Straddling two worlds can be awkward and uncomfortable. It might even be silly, impractical, and unhelpful.

But hey, for what it’s worth, my floors are clean.

Ps. My sister-in-law, living in India, pointed me to this blog post. It. helps flesh out the conundrum even more.