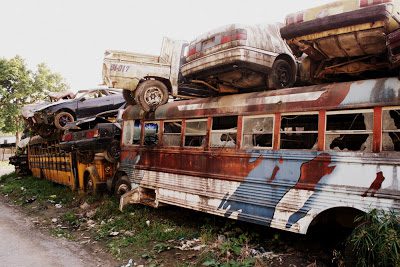 I’ve been getting braver with my camera! Some days, I wrap it in a towel, tuck it in my backpack, and then, if my mood (and the lighting and the social setting) is right, I whip it out and shyly snap a few. I never take as many photos as I’d like, and I don’t circle my subjects like I do in the privacy of my home, but still, it’s something.

(I’ve noticed that the photos, even the clear ones, end up looking fuzzy on the blog. Anyone else—readers? bloggers?—having this problem? Probably, blogger has it out for me.)

We pass this dump on our way out of Cobán. Oddly enough, I find trash to be quite an interesting subject to photograph. I’m fascinated by what people throw out, and how and where—it says so much about a culture. Maybe I’m a garbologist at heart? 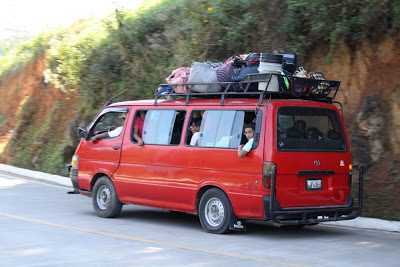 I’ve said it before, but I’ll say it again (and again and again): these microbuses are meant to hold 12-15 people, but they actually hold between 25 and 30. In the US, we’re taught that travel should be a luxurious event with spacious, comfy seats, ideal temps, and entertainment options. However, for the majority of the rest of the world, travel is simply a means of getting from point A to point B, never mind comfort. Having a place to rest your behind isn’t even necessary.

Also, contrary to the Central American saying, “There’s always room for one more,” the drivers do eventually turn people away (thank goodness). 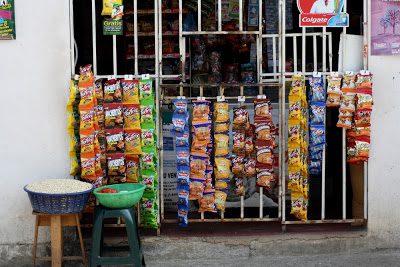 Little stores (called tiendas) are everywhere. It seems like everyone and their aunt Tilda wants to slap a sign out front and sell cokes and chips. I still don’t understand how they make a profit.

Also, storefronts are often barred off. The customer simply stands on the street and asks for whatever she wants, and the vender fetches and bags it.

Note the bowl of dry corn (for making tortillas) sitting out front and, beside that, a bowl of tomatoes. Also, the chips. Lots and lots of teensy bags of chips that are empty before you even know what you’re eating. (I miss plunging my hand into a big, greasy bag of salty chips and eating my fill without fear of running out.)

Meet (the back of) our street sweeper! 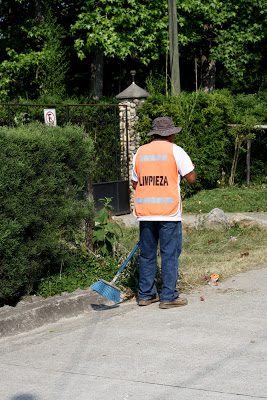 This guy spends his entire day sweeping our street, up one side and down the other.

We always greet him, and he usually mumbles a reply, his head ducked low. However, just a couple days ago, he stopped me, asked about my camera (and I thought I was doing such a good job of being discreet when taking photos, ha!). His name is Enrique.

Enrique said he thought we (me and my husband? all six of us?) were siblings. Riiiight, six siblings just bumming around Guatemala together. Still, his shock and awe upon learning that I was the mother of four (“I thought you were a teenager!”) gave me a happy buzz for a couple hours. 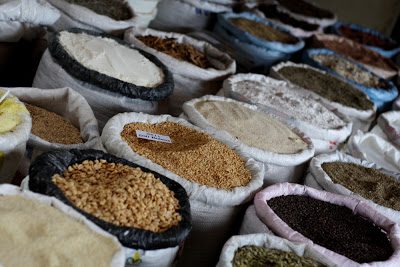 Some stores showcase big sacks of grains. Once, I made a vendor tell me what each thing was. Among the choices: popcorn, sesame seeds, bay leaves, flour, peanuts, spicy peanuts, bird seed, beans, incense, etc. 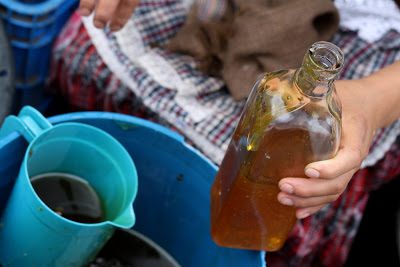 The Wednesday before Good Friday, I went to market and was surprised to see honey everywhere I looked. Every other vendor had a five-gallon bucket, and, in her free time, was pouring the honey into old soda and whiskey bottles. “What’s up with all the honey?” I asked a woman. She just smiled and said, “Es la época de miel,” as though that explained everything. I never saw any honey before and I haven’t noticed it since. 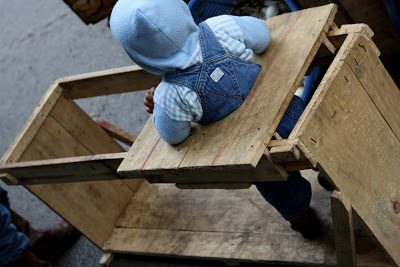 I’ve seen these playpens on more than one occasion. The table (er, baby stocks?) sits on runners. The kid gets stuffed through the hole and then spends his day running back and forth in his little cage. It’s actually a rather brilliant set-up, though something tells me that it wouldn’t meet the safety standards of the American Academy of Pediatrics.

I took one picture of the kid’s face (with his parents’ permission), but the poor dear immediately burst into tears. I had to finish take the rest of the pictures from behind, out of his line of vision.