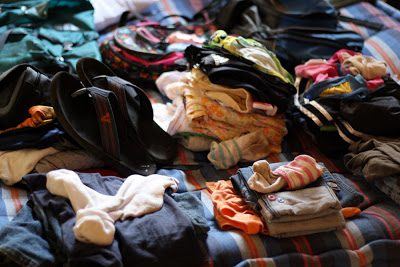 Preamble: this series of posts is long. Epically long. There are two reasons this is so: one, a lot happened. And two, the words pile up when I don’t get to write for five days and then you get this.

In order to renew our visas, we had to leave the country at the three month mark. Which meant that we had to go to either Belize or Mexico. We opted for Belize. On our way, we’d hit up the Tikal ruins and then do some snorkeling in the Atlantic, we figured. The Belize border dudes aren’t too keen on people walking across the border and then turning right around and re-entering, so since we’d be stuck in Belize for a couple days, we figured we might as well do something fun. We failed, completely and totally, but now I’m getting ahead of myself.

Piles to be packed.
Rules: one backpack per person, and wear the sneakers and carry the flip-flops.

Note: getting residency, like we did when we were three-year volunteers in Nicaragua, is too complicated and expensive for a short term position, though after what we’ve been through, I’m not quite sure that’s completely true.

Also, note: at the six-month mark, we can renew our visas in the capital. It should, we hope, involve minimal rending of garments. 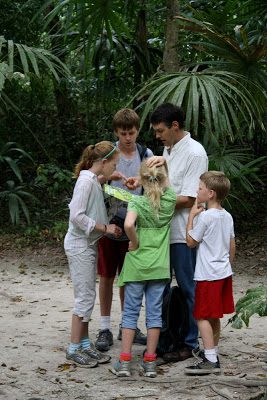 When traveling, take maps. This is called foreshadowing.

For this trip, I wanted to be as financially savvy as possible. We’d be shelling out the cash for a couple big ticket adventures, but in order to pull it all off, we’d need to be thrifty for the in between stuff. I spent hours researching on the computer and poring over our Lonely Planet guide, trying to plan the best schedule, learn the going rates, and preparing to play it smart. For the Tikal adventure, it all paid off. We saved money and had fun. For the Belize part, well, we’ll get to that later.

***
Chapter One: Setting Out

We got up early on Wednesday morning, took a taxi the whole way into Cobán (the buses weren’t running yet, plus, sometimes it’s cheaper for us to go in a taxi than to pay six bus fares), and found a bus headed for the Petén.

The Petén is in the Northern part of Guatemala. It’s flat and low down and excruciatingly hot. We spent five hours riding through it in a packed-full micro bus. If it weren’t for the fruit check point (where everyone has to get out while scary-looking official people root through our bags in search of forbidden fruits) (our expensive apples passed, whew) that happened to have a public restroom, thank goodness, it would’ve been five whole hours without a bathroom break.

We got off at Santa Elena and hopped another bus to El Remate. The hotel we were going to stay at happened to be shut down (oops!), so I asked a local for an economical place and she took me to her dad’s hotel. We got two rooms (four beds and communal shower, toilets, and pila) for about 13 bucks, which made me immensely proud and feel all sorts of capable, as in, we are so awesome at this backpacking stuff that Lonely Planet should hire us to trot the globe and write about it because I have this stuff down.

Turns out, the rooms were stifling hot and the shower was shocking (my older daughter got smartly zapped), but hey, the people were friendly! I was not daunted in the least.

Lesson Learned: economical might not be the most comfortable, but as long as it’s clean (and this place was), we will survive. We might melt, suffocate, and sacrifice privacy and modesty for the sake of an open window and the hopes of a hot breeze, but we’ll make it.

When we first arrived, it was lunch time. Every place looked touristy and there wasn’t a grocery store in sight, so I stopped at a place that looked like it had food-making potential and eyed the menu board. Everything ran about Q25.

“Don’t you have anything for less?” I asked. “In the market where we live, we can get a plate of beans and rice for Q10. We just want something simple—food that the locals eat.”

“I can make you spaghetti with vegetables for Q10 a plate,” the woman offered. We accepted, of course. You really can’t beat feeding a family of 6 for $US7.50.

We ate there again that night. This time it was eight emapanadas (four filled with mashed potatoes and the other four with chicken, and topped with slaw and a saucy tomato sauce) per plate, again at a cost of Q10. We ordered four servings, plus one more at the end just to make sure we were all filled up real good. The kids scarfed them down so fast that the server, the cook’s husband, busted up laughing every time he set down a fresh plate full.

Lesson Learned: ask for stuff that’s not on the menu! Tell them what you’re willing to pay and see what happens. 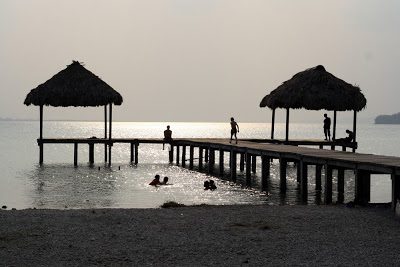 In between our economical lunch and supper, we headed down to a public dock for some lakeside swimming. 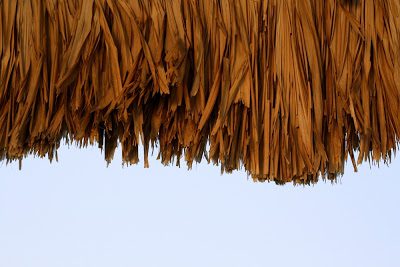 There were some fancy docks (swimming pools, too!), but they were private, so we kept asking around until we found a place. It was gorgeous. Hot, yes—even the water felt hot—but gorgeous. 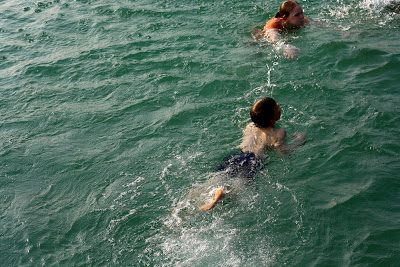 Our youngest, the kid who I couldn’t bribe to jump off the small diving board at the public pool last summer, is now jumping off high-up docks and swimming the whole way to shore by himself. It’s now official—we have four, fairly stable swimmers, hallelujah!