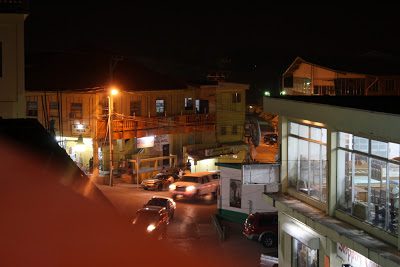 Continued from prologue and chapter one and chapter two
This is the final post. It’s long. By the end you will feel exhausted…which is the point exactly.
***
Chapter Three: In Which It All Falls To Pieces

After spending the morning dehydrating ourselves at Tikal, we packed our bags and caught a very, very full and very, very hot microbus to the Belize border where the Guatemalan official tried to charge us money we didn’t owe (we had a heads-up on this and to their request of Q20 per person, my husband’s sharp, “Por qué?” did the trick and they messed with us no more) and the unfriendly Belizean official in an air conditioned booth didn’t let us through until the third try (is there a reason they can’t tell you up front everything you need to do to get through the border?), and then there was a hot taxi ride into San Ignacio, the youngest kid wigging out all the while because he didn’t get a window seat.

We were not prepared for Belize. We did not have a guidebook, so aside from what people told us, what we gleaned from travel blogs, and what I read on the internets, we went in cold. This was not smart. But hey, I figured we were in Central America, right? People speak Spanish and ride on buses and eat lots of tortillas. How hard could it be?

*People didn’t speak Spanish. I mean, some did, I suppose, but mostly people spoke a mix of English and Something Else with a bit of Spanish thrown in for zip. All signs were in English, but I only understood about 20 percent of overheard conversations. It threw me for a major loop.

*Also, people were bigger, both height and girth. They were expressive: singing out loud, yelling at each other, smiling so big their eyes crinkled up in the warmest fashion evah.

*Some places we could drink water from the tap. There were toasters! We could flush the soiled toilet paper! Stores sold soft furniture and chocolate!

*All grocers were Asian, do not ask me why. Also, they all seemed exceedingly grumpy and did not speak a lick of Spanish.

*The money felt like actual, real money, not like the play stuff we’re used to: two Belize dollars to one US dollar, and both currencies were acceptable. Also, everything was a lot more expensive.

*The buses were huge old school buses (they got full, yes, but there was no packing in people like sardines), and travel was seamless—get off one bus and hop on the next.

*The street food was awesome, the best I’ve ever had in Central America. We ate tacos, buns with cheese, casava pudding cake (not our favorite—like cake, but with gummy bear texture), hamburgers, hotdogs, and a huge plate of beans and rice topped with a scoop of potato salad, a scoop of onion-hot pepper salad, a piece of chicken, and lots of rich, tomato sauce spooned over it all.

*Littering was taboo, glory be!

To sum up:  I was so out of my element, I didn’t know which end was up.

At our hotel in San Ignacio, we took two non-AC rooms, as the AC rooms were ten bucks more. Our rooms were on the top floor, next to a balcony. There was a great breeze and each room had one fan, so we figured we could handle the heat.

Wrong. When it got dark, the wind died down and the street’s multiple dance halls cranked it up, waaaaay up, until well after midnight. The noise combined with the sweltering heat so that even the exhausted children had trouble sleeping.

The next morning, though, there was a complimentary breakfast on the balcony, and we feasted on eggs, toast (TOAST!), fresh pineapple, bananas, and coffee. 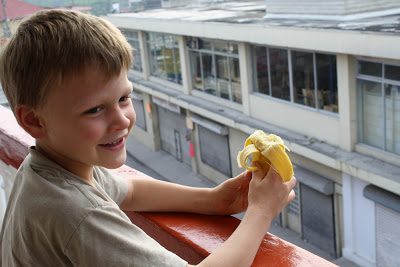 After breakfast, we packed up and set out for our little island vacation. For only $US400 we would take an hour-long boat ride out to Tobacco Caye, sleep in little, over-the-water cabins (I had reserved two of them), eat three square meals a day, and snorkel all day long in the surrounding coral reefs. I couldn’t wait for the kids to see the amazing ocean life. I couldn’t wait to relax in the hammock. I couldn’t wait to smell the salt water and read books and get my meals served to me.

So we eagerly, happily caught a bus to Belmopan and then another bus to Dangriga and right there is where things went utterly, completely, and devastatingly wrong.

Even though the travel guides said otherwise, our source (a frequent visitor to this island) had told us that from Dangriga we should take a bus to Placencia and from there catch a boat to our little island. I must have misunderstood because this was simply not true. What we should’ve done was simply—oh, so simply!—get off the bus in Dangriga, catch a boat, and shoot out to our little piece of island-coral reef heaven.

But instead—woe is us!—we jumped on another bus to Independence (because the bus for Placencia had already left), went two hours south (what the—?), got on an expensive water taxi (because the guy selling the tickets insisted we could easily get to our island from Placencia) and traveled back up to Placencia where we learned it most certainly was not easy to get to our island. And so there we were, stuck. 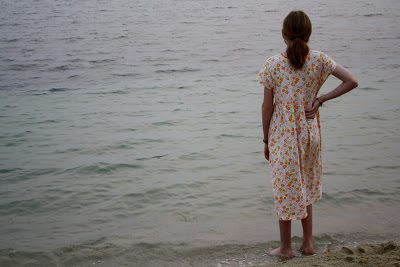 In a smelly cove.

No coral reefs in sight.

And no extra time or money with which to right our wrong. 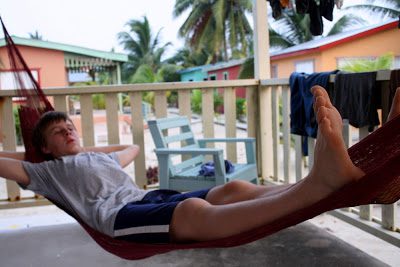 The frustration, rage, and sadness completely overwhelmed. While my husband went to find a room and the children splashed in the ocean, I sat on the beach and cried. Our one chance to see the coral reefs and we blew it! And now we were spending oodles of money in a place we didn’t want to be! I was so crushingly disappointed, so insanely angry at our ineptitude, and so hot that I felt like I’d explode. I hallucinated about angels in speed boats, money-laden strangers, and miraculous turns of events. None of which happened, of course. 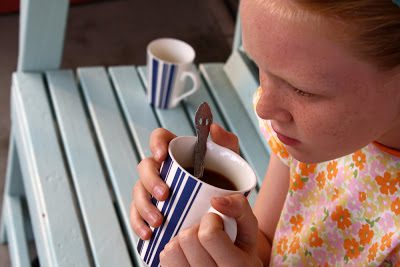 Instead, my husband found us a nice little cabin with a good kitchen, great stove, toaster, and coffee pot. My younger daughter made everyone coffee for breakfast—it may have been her favorite part of the whole beach experience. We ate supper at an okay restaurant. The kids played in the sand. We rented snorkeling equipment and floated around admiring the grains of sand and the raw sewage settled on the bottom (so says my husband—we didn’t say a word about that to the kids). 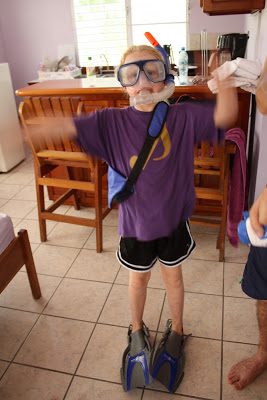 Also, some of the kids came down with diarrhea. The fan over the bed rattled like a jackhammer, or a galloping horse, and kept waking us up. The ocean was full of jelly fish and the kids suffered multiple burns (those buggers hurt). It was so hot that getting undressed was like peeling plastic wrap from moist bread dough.

My husband, in an effort to add levity to brutal disappointment, started referring to our offspring as The Baudelaire Children of the famed Lemony Snicket books, A Series of Unfortunate Events, which, clearly, was what we were having. 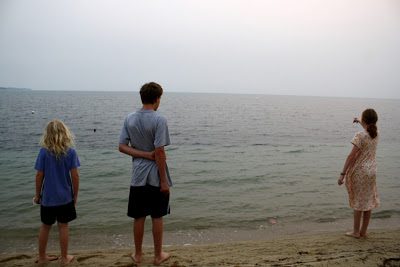 It helped, some. We told the kids they were travel warriors, that they were learning the downside of backpacking in a foreign country, that things can’t always go as intended. We apologized and said that, lucky them, they had their whole lives ahead of them in which to explore the world and find the best coral reefs, since their parents obviously couldn’t. “When you find them,” I said, “send us photos, ‘kay?”

They were tough about it. The older kids even piped up with a Thanks for the trip, Mom and Dad, as we were trudging to the bus stop to head back up to Dangriga. Somehow their bravery and graciousness made me feel all the worse. They were so excited, so hopeful, so trusting—ARGH!

While we waited for the bus, we ate our lunch: cornflakes, bananas, and reconstituted powdered milk in old yogurt cups. 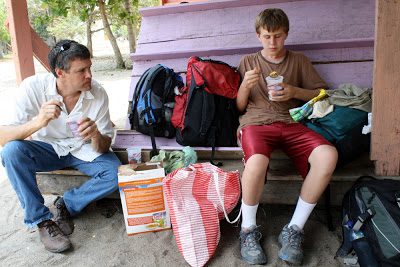 This, traveling with cups, spoons, and powdered milk, was perhaps the smartest travel move to date. That, plus always carrying doubled-up plastic bags (they got called into service once), packs of moist towelettes (which I shared with the mothers of two other puking babes), and packing a ball of laundry soap, a piece of twine for clothesline, and a pack of clothespins, (Maybe Lonely Planet does want to contract with us after all?)

So we left the peninsula at noon—by now it was Saturday—and spent the whole afternoon busing back to San Ignacio where we got two air conditioned rooms, thank you very much we are so done with the heat. 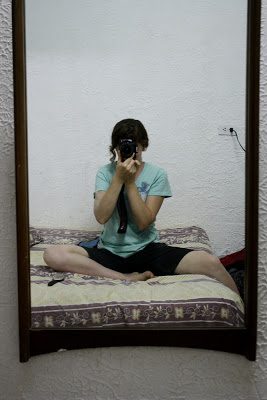 The next day we re-entered Guatemala—at least we got our visas renewed!—and suddenly I could understand people again. 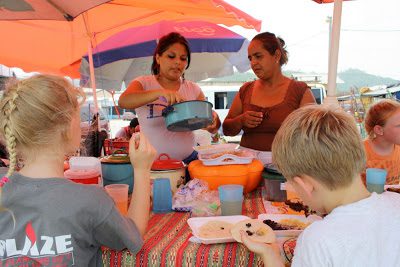 We got a bus and headed back through the Petén. 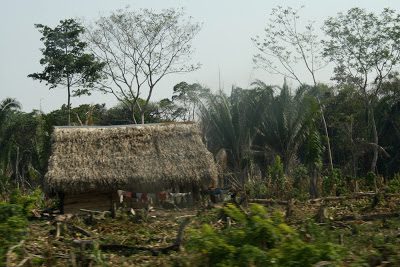 I still marvel that people can exist, even thrive, in such an inhospitable climate. 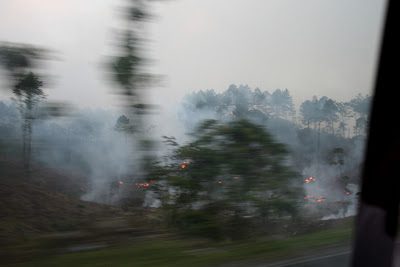 It didn’t matter, though, we just sweated instead of peed.

Except for this kid. 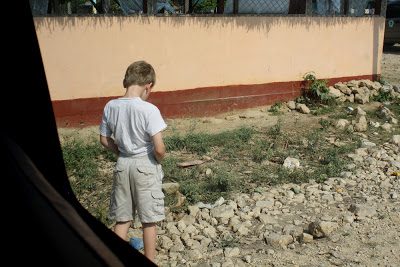 He learned the art of taking advantage of brief stops (when, for example, the driver pulls over to buy a hundred pounds of corn) (though I don’t think he peed at that particular stop). (I snapped this photo and chuckled, because last year, when we stopped to let this same kid pee in an upstate NY ditch, a cop pulled over and gave us the fifth degree. Here, the men relieve themselves wherever they pretty well please and no one bats an eye.) 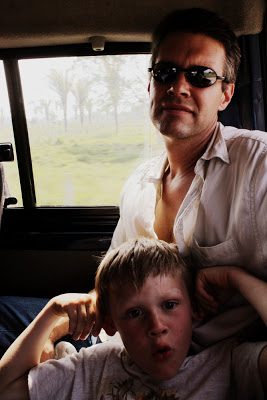 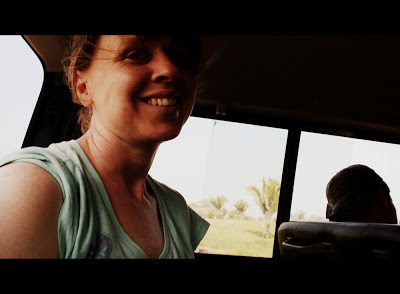 We shared our microbus with a group of (mostly) European backpackers and their dog. We can tell just at a glance if a tourist comes from North America or Europe. North Americans are heavy and wear clothes. Europeans are almost always radiantly fit … and half-naked. These observations are the sort of thing one ponders when stuck in the back of a microbus for hours on end. 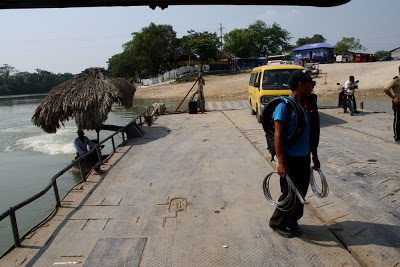 crossing the river on a ferry: the little contraption off to the left is
the motor that’s pushing the entire barge

Oh, we did have two new-to-us experiences!

1. At the beginning of the trip, in the broiling heat of the midday, the driver pulled the bus into a gas station, the attendants shut all the windows with us inside, and then a half-dozen gas station employees proceeded to wash the bus. I contemplated having a panic attack but decided it would take up too much air.

2. Also, they filled the bus with gas while it was still running, and then about four guys rocked the bus back and forth for two whole minutes while they tried to top off the tank. At moments like this, I practice an important travel skill called Not Thinking.

And then we were home. Sad, bummed out, relieved, grateful, and so, so happy to be home.

Our next trip is in July. We’ll be hitting up at least two more countries, and we will, I can assure you, be acquiring the appropriate guidebooks.

Ps. Today I’m home with a sick little boy. His stomach is all sorts of messed up. Probably thanks to all the hours spent frolicking in the sewer.

Pps. I will get over our Baudelaire adventure. It was simply a blip in the big scheme of things. Just a small, hot, 24-hour mess. Time heals all wounds. Etcetera and yadda yadda yadda…