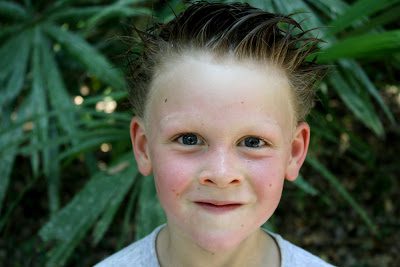 This boy has been having quite the go-round with weird ailments.

at Tikal, after soaking his head in the bathroom sink: hot and flushed (and healthy),
and very proud of his self-styled hair

First, he ran bare-legged through some sort of plant that leaves welts and burns like the dickens for an hour or two. We gave him a bath and then drugged him with an antihistamine, and the agony eventually faded.

Second, there was the stomach bug. A little puking, a little diarrhea, a little staying home from school and laying around. (Central America is The Place To Be if you’re going to suffer the stomach bug. His recuperation diet included mango, watermelon, pineapple, and banana, how lucky is he?) 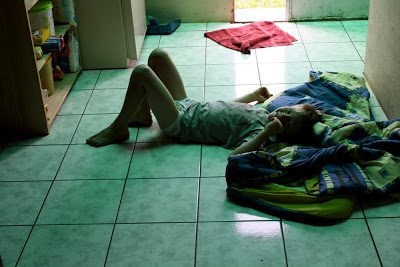 He’s still not completely himself. Last night we had hotdogs (the first time since we came here so this was A Big Deal) and he only ate one. (His older brother, however, ate nine.)

And third, his allergies are giving him grief. He was on daily allergy meds, but then we ran out and, because he was always snuffling and sniffling even on the meds, we decided to give it a go without. He’s just as snuffly as before, but now there’s the eye problem—they swell up somewhat regularly. We put drops in as soon as we detect a problem and the inflammation subsides immediately, but still…it’s uncomfortable.  Is it because he’s not on a pill now? Or is it because of something in the air? Like, all the smoke from the field burning? It’s hard to know. 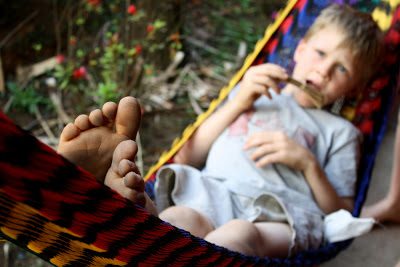 We bought a hammock! (Two, actually, but the second one isn’t up just yet.)

The other kids have been dealing with stomach stuff, too. Not enough to knock them down, but enough to keep them from eating much. (Except for, obviously, my older son.)