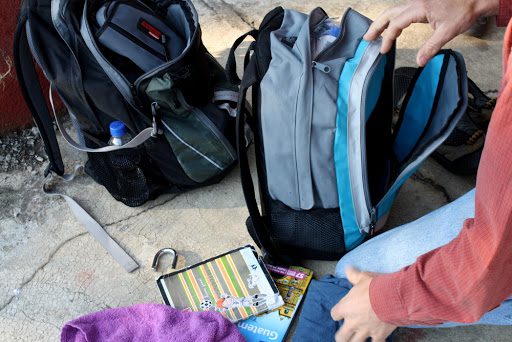 Yesterday, we went adventuring. We’ve been here two months—long enough to develop a routine and to appreciate a break from it. It was time to go some place fun.

The night before the kids laid out their clothes and I baked cookies. In the morning, we woke early. I made a mountain of sandwiches, washed apples, and filled water bottles. We gathered sunblock and bug spray, flip flops and towels, money and camera and The Lonely Planet because hey, if you live in Guatemala, you’ve gotta let your tourist freak flag fly on occasion! 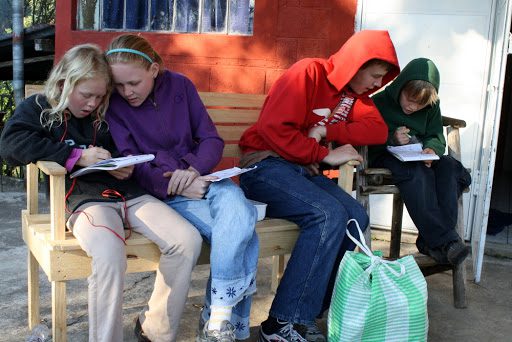 waiting for the taxi

Here’s how we got to where we were going:

A summoned taxi drove us into Chamelco. There we met up with an EMM worker who would be joining us for the day and hopped on a bus to Cobán. Then we took a taxi (we fit all seven of us, plus the taxi driver, in a small, five-person car) across town to the Lanquín bus station. We had to wait an hour for the bus to leave, so we wondered around the block, bought a bag of bread, spied an open barber shop and forced my younger son get a haircut, and bought a bunch of chips (the agreed upon bribe for getting the haircut). Then the bus ride to Lanquín, part of which was on paved roads and the other part which was on gravel. The gravel part was all downhill. I did not know this before, but driving downhill on a gravel road for many minutes at a time is akin to a medieval form of torture, or it would be had there been cars in medieval times. And then in Lanquín, we bargained with a truck driver (I still think we paid too much) who agreed to drive us to and from our destination. 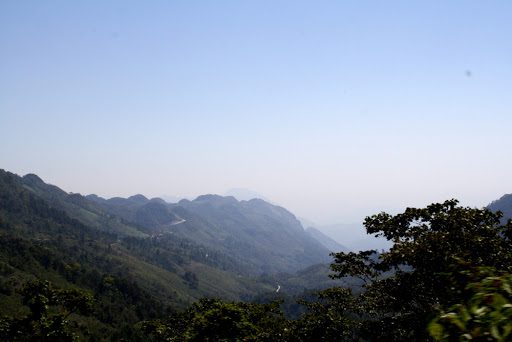 you can see part of the road snaking across the mountain’s back,
just waiting for us to get there, sigh

This, my friends, is why we call it adventuring. There are no guarantees and nothing is easy. The end.

Oh! You want to know where we went? 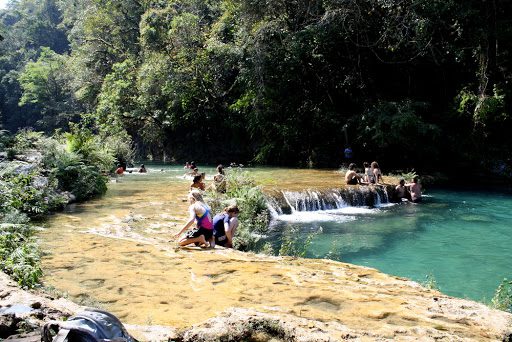 We went to Semuc Champey, which, according to some sources, is the most beautiful place in all of Guatemala.

Now, ’tis true I haven’t seen all of Guatemala, so I can’t confirm this exactly, but it certainly was stunning. 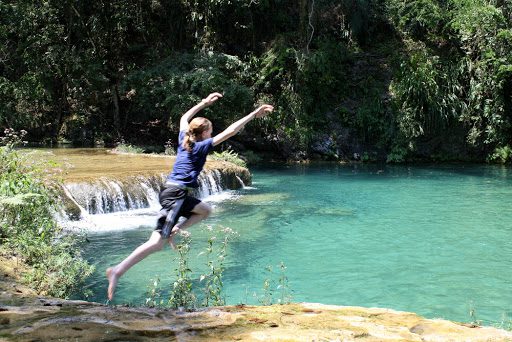 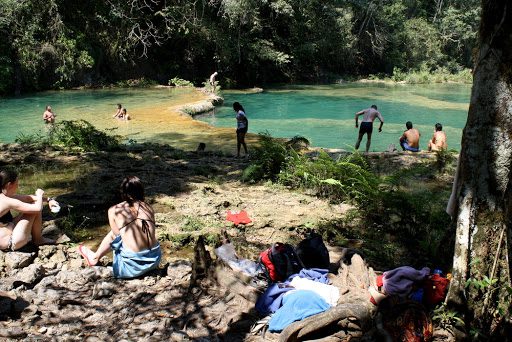 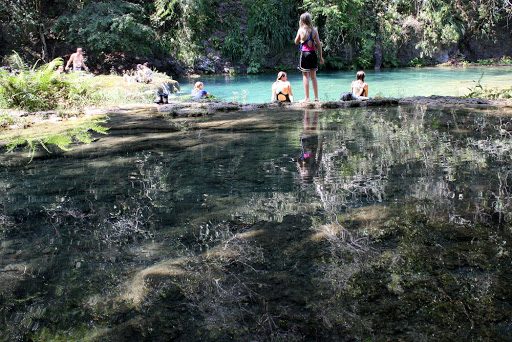 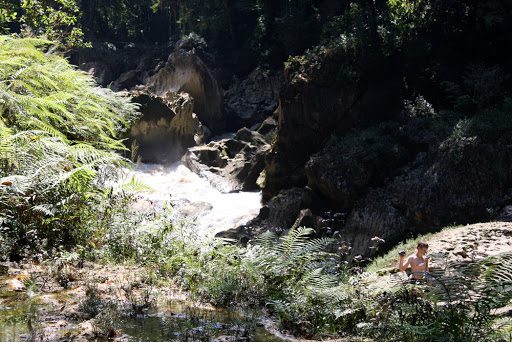 The place scared me half out of my wits. I went with my older son, ie the kid who is fearless. He escorted me across the slippery sandstone rocks to the roped off edge which I couldn’t see over, thank goodness. And then I waited there while he walked to the other side (it was permitted, but very wet and I had my camera and didn’t feel like risking ending up on my butt) and down a bit to the edge so he could photograph the river-eating hole. There were guards over there keeping an eye on him, and other, braver (stupider?) than me tourists, but even so, I couldn’t watch. I had to turn around and focus on picking my way back across the rocks to keep at bay the images of him slipping over the edge.

(In the picture above, you can see his head in the bottom right hand corner. Eek!) 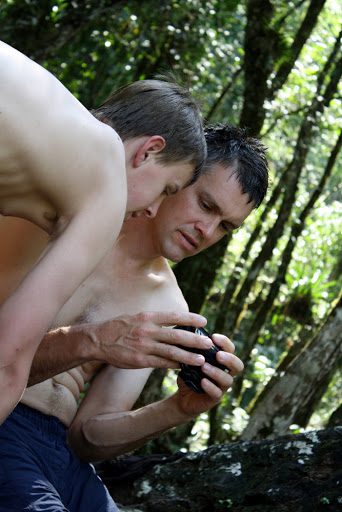 Showing the pictures he took to his papa,
trying to convince him to “Come and see NOW! It’s amazing!”
(He went.)

Needless to say, we did not take the other kids to visit that spot.

Anyway, while the river roils along under the ground, up above is a whole series of crystal-clear pools (fed by a different source than the underground river). You know, water falls, deep blue holes for diving into, long ledges of limestone for lounging, all that natural beauty stuff. 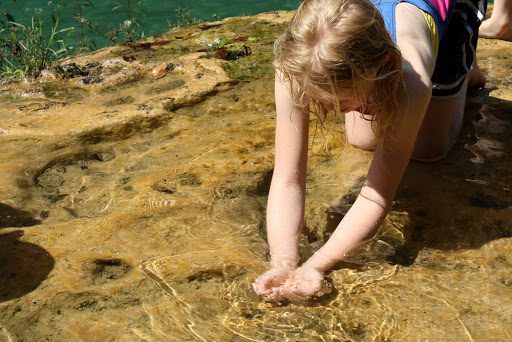 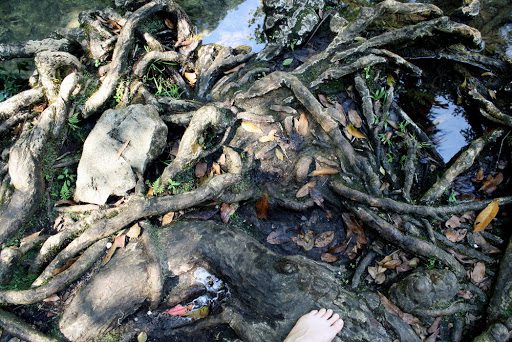 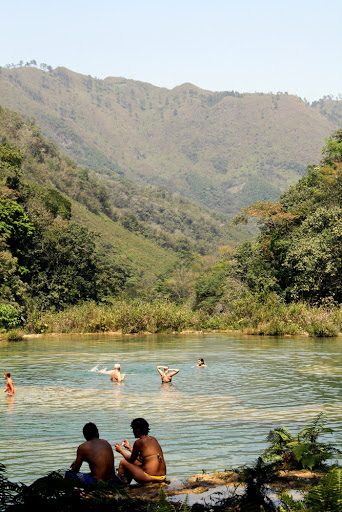 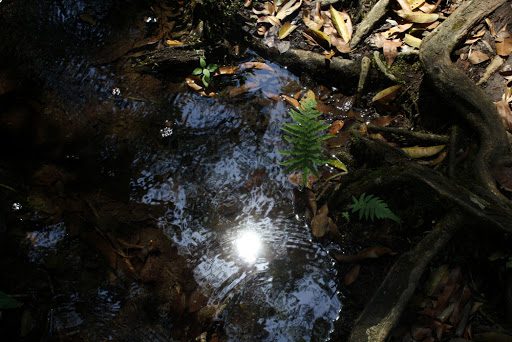 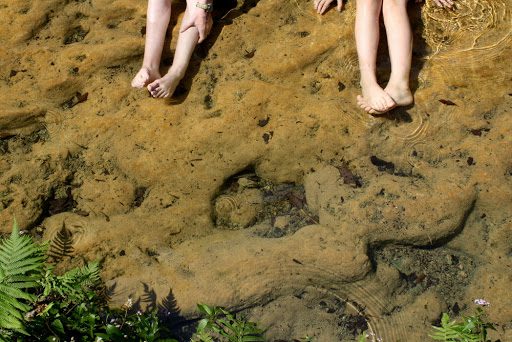 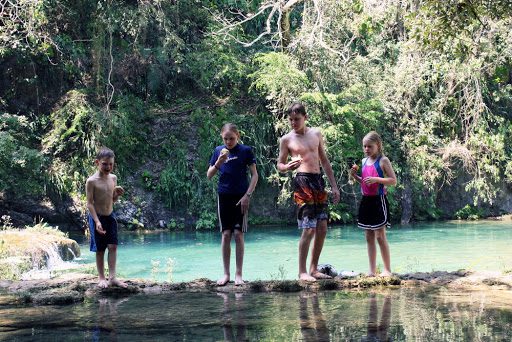 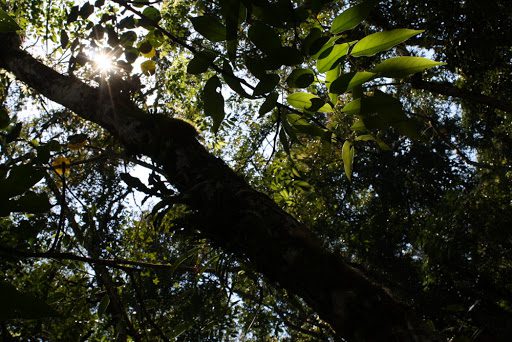 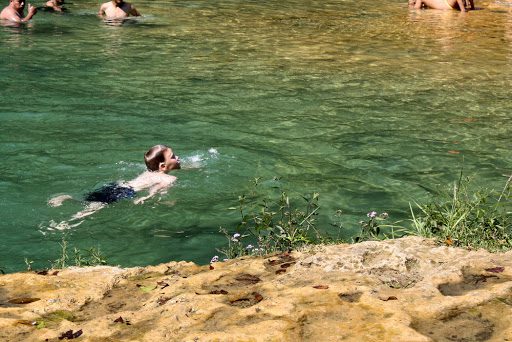 The kids fed the minnows and fat yellow fish.

My little one took to jumping off the edge into the blue deep and then swimming the whole way across to the edge. “I’m not going to be afraid of jumping off the diving board when we get home!” he informed me proudly.

We ate the sandwiches and apples and cookies and bananas.

I watched the tourists and pondered, once again, my belief that, when it comes to swimming attire, less does not mean more.

The whole place was idyllic, but I, however, wasn’t into it. After the long morning of travel, I was whupped. And while I would’ve loved to go swimming, the hoards of tourists made me shy and self-conscious. Plus, I was (in retrospect) stressed about the return trip. We had been forced to pay the pick-up driver in advance—would he be there to take us back like he said he would? And we were catching the last bus from Lanquín to Cobán—would we get there in time? And if the truck driver didn’t show and we missed the bus, would be have enough money to spend the night out here in the boonies? With all that on my mind, it was kind of hard to relax.

So I took pictures and pretended I was relaxed and worried about money (day outings for a family of six are expensive!) and thought about all the things we could do to make it more worth our while…and then it was time to come home. The truck driver was there waiting for us, and the last bus waited for us (the taxi driver and bus driver were in phone communication on our behalf, bless their hearts), and they even cleared out some of the seats so we’d have a place to sit.

Several hours later, we were home sweet home. It had been a hot day (and the power had been off the whole time—a scheduled event), but we didn’t realize how very hot it had been until we saw the butter dish. 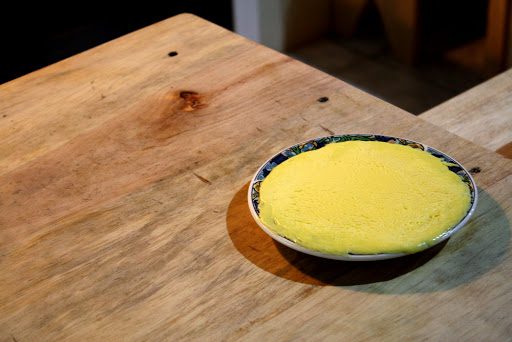 The very best part of the whole day? Eating cereal for supper and drinkingdrinkingdrinking and getting showers and reading a couple chapters of Homer P. Figg before tucking the adventured-out chillen’s in their beds and then snuggling down into ours shortly after.

(Oh, and getting an email from a friend in which she recounted their outing to a maple festival and how they saw a newly born calf on the way home and, at their leisure, stopped to watch it. To drive somewhere, in a private car, with complete control over time and speed and destination—what a novelty! Can you imagine?)