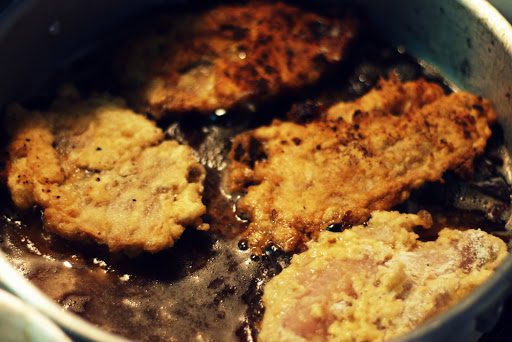 A little while back, our neighbors gave us a couple pounds of frozen tilapia fillets. Unsure of how to proceed, I stuck them in the freezer and let them sit there for a couple weeks. But then this past Saturday, with the dreary, rainy weather threatening to pull me under, I decided a special supper was in order.

The fish-giving family had said that we should fry the fillets, but I’m no expert, so I resorted to Google. However, Google was decidedly unhelpful, so later on when my husband headed down to visit the neighbors just for anyhow, I had him call back up with their recipe.

“Salt the flour till you can taste it,” my husband explained over the cell phone. “Dip it in egg and then the flour—do it two times to make it extra crispy. And then fry it in lots of oil, about a half inch.”

I did just that (plus boiled a bunch of broccoli and made some lime-chili butter to garnish the rice) and we all went wild and pigged out. (Except for my younger daughter, but she didn’t count because she had a bad attitude.) The next day after church, we ate the leftover fish in sandwiches. 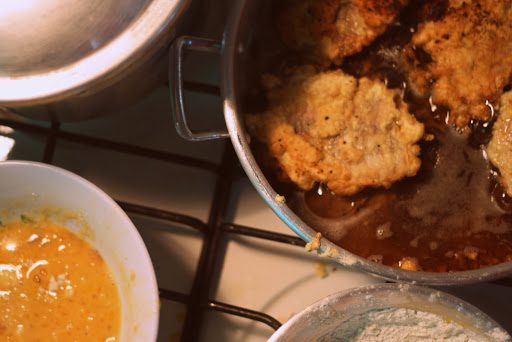 The decision is unanimous (except for the younger daughter who doesn’t count): we have to make the fish fry a weekly tradition.

(That night when my husband was visiting the neighbors, he got to watch the father process a fish. After catching a tilapia, he simply sliced off the fillets on either side of the fish without even killing it and then tossed the carcass in a bucket. That’s it. The fish didn’t even flop around, my husband said. I’m equal parts impressed and grossed out.) 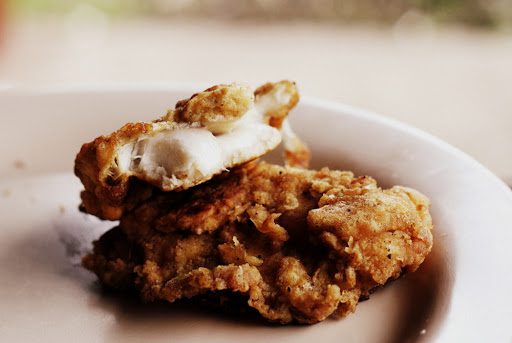 In one bowl, beat the eggs, and in another bowl, stir together the flour and salt. Taste the flour—if it tastes salty, you’ve added enough salt. Add a bunch of black pepper.

Pour enough oil into a skillet to fill it about a quarter inch (or more). Heat till shimmering.

Leftover fillets make excellent sandwiches. Simply reheat in a hot skillet and place between two pieces of bread with the toppings of your choice.